The result of the US election will have monstrously big implications for the US and wider world. If Trump wins, it'll be a shock of biblical proportions to the mainstream. If crooked Hillary wins, little would change in the short term, but long term prospects for the world economy and societal peace, would unquestionably deteriorate.


Not on the fence

I've posted here on the US/world capital markets since early 2012, and have almost entirely managed to refrain from anything directly political, not least because that is not what these pages are for.

Yet, the current election is arguably so very important, and today's post will be an exception. More than anything, I wanted to at least give my own best guess as to the result.

As someone from the other side of the pond, I think I can at least offer something a little more balanced than the usual 'conservative vs liberal' viewpoint. Besides, those terms have somewhat different meanings in the UK.

In coming to form an estimate of how the result might go, lets first consider the 2012 result, where Obama won a second term with 332 electoral college votes against Romney's 206. 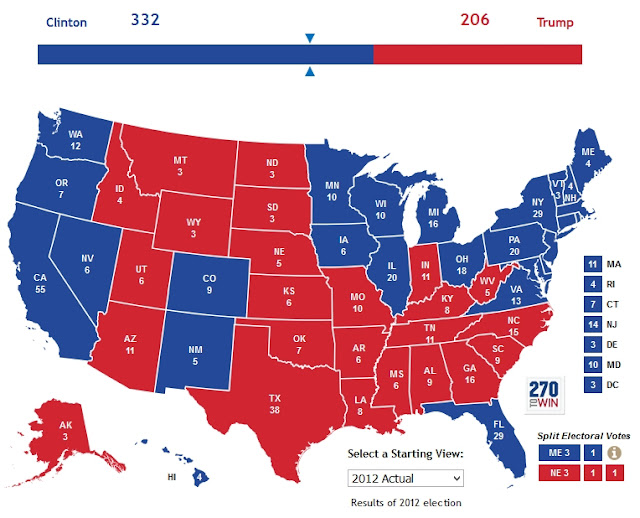 Here is the issue that even most democrats should be able to agree on, Clinton is not as favoured as Obama.

So... a basic assumption is that Clinton won't do better than the 2012 result. By definition, most.. if not all, of the states that Romney won, should be maintained by Trump.


The easiest states to win

With a review of the data @ wikipedia

If Trump can pick up just four extra states: FL, OH, VA, and CO, he will achieve a marginal victory. 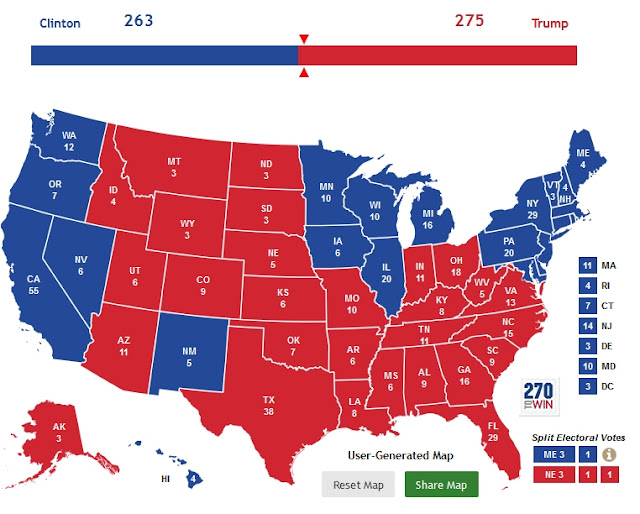 I've watched most of the Trump rallies, of which there have been over a hundred across the past year.

I've come to believe Trump will win Michigan (MI), a state inherently leaning toward the  democrats. Michigan is the ultimate example of how the US economy has changed. NAFTA has lead to huge job losses since the 1990s, with large scale destruction of core manufacturing that once made America great.

For Trump to win MI, he needs a swing of 9.5%. That is a lot, but its not unheard of in the modern political world.

The grander point is... if MI does fall to Trump, so should most of the other states. 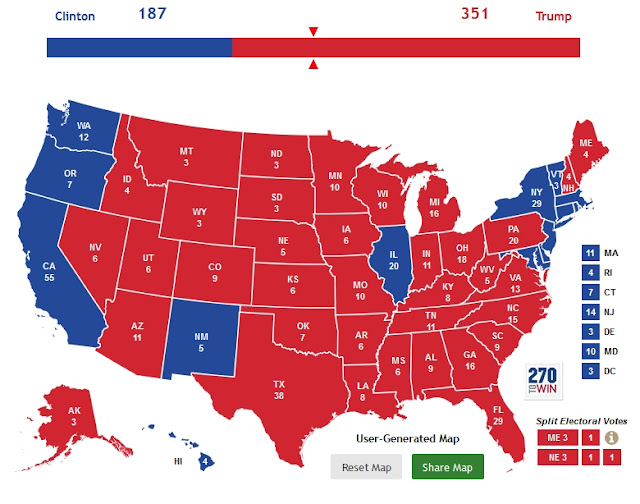 The above of course would be an absolutely wild outcome, one that would shock the mainstream, and indeed, the US/world capital markets.

Am I just being overly hopeful? Am I wrong in thinking that the American people do understand that the real economy hasn't actually improved since late 2008? They know their pay hasn't gone up for the better part of almost two decades, yes?

Sure, the equity market has soared to new historic highs, but the real economy (especially when factoring OUT the QE), is little better than when Bush left office.

Industrial/resource states like MI, OH, PA, and VA should be especially supportive of Trump.

Perhaps the best example of the real difference between the two candidates are the frequent banners of 'Trump digs coal', whilst Clinton has long stated her aim to put the miners out of business.
--

Do you have a better guess? To create your own best guess for the election result, visit http://www.270towin.com/ , click some states, take a screenshot, and post it up!
--

Its a somewhat scary thought, even for someone not living in the USA, but a victory for crooked Hillary Clinton has to be considered. Any scale of victory would be a mid/long term disaster for the US and wider world. By definition, a Clinton presidency would merely be a slightly more feminine version of the past 7 years.

Should we expect fiery nuclear obliteration? Clinton sure seems a little war hungry, especially with Russia. Far from being concerned about 'temperamental Trump' in charge of the US nuclear arsenal, I'm genuinely worried about Clinton having the opportunity to turn much of the northern hemisphere to glass.

There are many issues surrounding Clinton of course, not least those of health and the infamous emails. There is Benghazi, but there is nothing to be added on that debacle, that a million other writers haven't already covered. A women president would be great....  just not that one.

When Trump announced his candidacy for president in June 2015, most dismissed it as a mere publicity stunt. Yet.. it wasn't. Not only did Trump win every single one of the republican primary debates, but he comfortably held his own against the political master that is Clinton, in the three presidential debates.

Watching the rallies has been pretty amazing. Many rallies were held in hangers next to a runway, and if you had your own jet, wouldn't that be what you'd do too ? 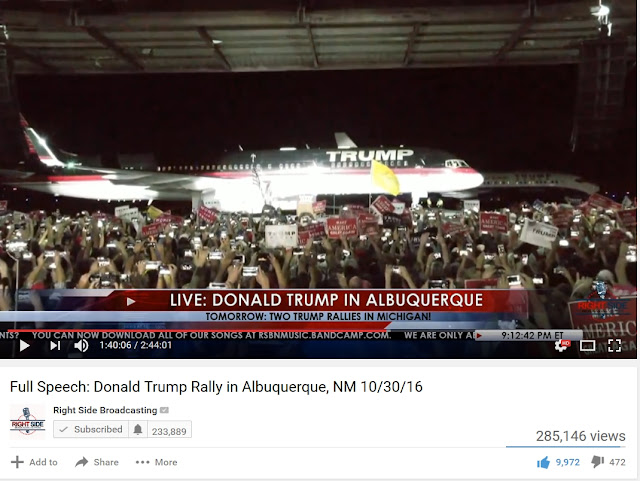 The alternative media have really shown their power in this election. On youtube, Right Side Broadcasting (RSBN) see: RSBN @ youtube, have been leading the charge for Trump. (Hello Wayne Dupree, love your shows!).

Trump's acceptance speech at the republican convention in July was good, but the more recent address at Gettysburg was far more important, as Trump gave a good outline of where he wants to steer the US.

Trump, the dark horse... that few saw coming, but is set to achieve the ultimate political prize.


Drinks and chocolates on standby

Yours truly will indeed hope for a 'shock' Trump victory tomorrow night. I'll be curious to see if Trump can get close to the 351 electoral college votes that I believe he can achieve. Frankly though, I'll be delighted with any marginal victory.

The most powerful nation in the world has a big decision to make. I shall hope the US populace take a chance, and vote for someone who is not part of the establishment, and who can't be bought by lobbyists.

I do sincerely understand why some of you out there, will instead be cheering on Clinton this Tuesday, I can only add, I just don't see another 4-8 years of Obama-style leadership/policy as a good thing.

As ever, feel free to leave a comment via DISQUS, along with your own 'best guess' for the election result.

yours... a distant onlooker from the eastern side of the Atlantic

**the next post on this page will likely appear no earlier than Wed' 7pm EST.
Posted by Trading Sunset at 01:00:00
Email ThisBlogThis!Share to TwitterShare to FacebookShare to Pinterest 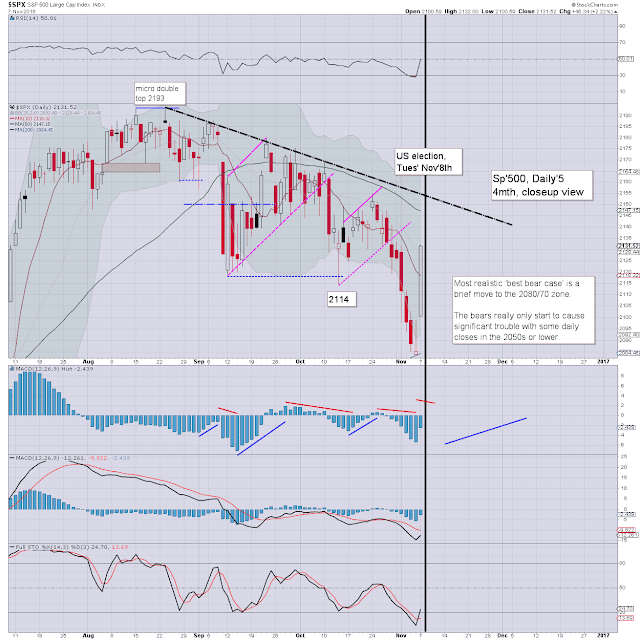 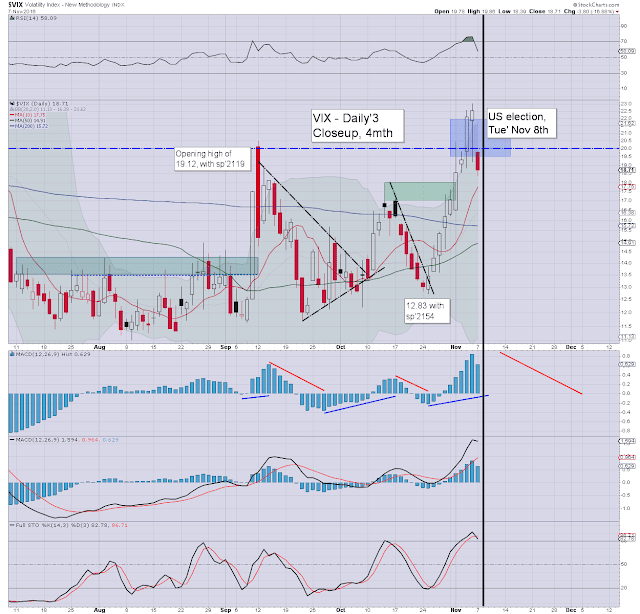 After 9 consecutive days of declines, the sp'500 has powerfully rebounded, with one of the strongest gains in some months.

Volatility has naturally been crushed, although relative to the past few months, the VIX is still elevated, as the uncertainty of an election result remains.

--
*A special US election post will appear Mon @ 8pm EST. The next market post on these pages will likely not appear until Wed' 7pm EST.
Posted by Trading Sunset at 00:00:00
Email ThisBlogThis!Share to TwitterShare to FacebookShare to Pinterest
Newer Posts Older Posts Home
Subscribe to: Posts (Atom)