Volatility, gains for the week

With the main indexes declining just under 1% for the week, the VIX managed a 13% increase across the week. However, 13% only gets the VIX to 15, which remains an extraordinary low level. 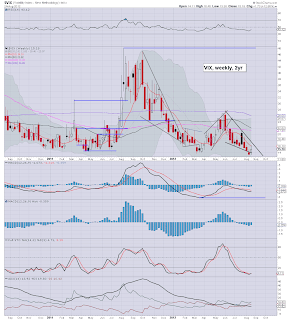 From a MACD (blue bar histogram) perspective, for the first time since mid May we have a tick upward on the cycle, but we're still negative momentum. At the current rate of increase, we could be positive cycle early September.

Whats clear, bears need a VIX weekly close next week at least over 18, that might at least signal the beginning of a new up cycle.

My concern remains that even if we hit hit 18/19 later next week, the appearance of the Bernanke at the Jackson hole will lead to a major rebound on Friday, and mark the start of a major new index up cycle.

So...lets see how we close next week, and if a trend on the bigger cycle has begun.
Posted by Trading Sunset at 23:00:00
Email ThisBlogThis!Share to TwitterShare to FacebookShare to Pinterest

Most indexes closed a little under 1% lower for the week, could be suggestive of a turn, yet the monthly trend is still very much cruising higher.

This time next week, we'll have that annoying 'Benny @ the hole' nonsense out of the way..It never seems to end..does it? 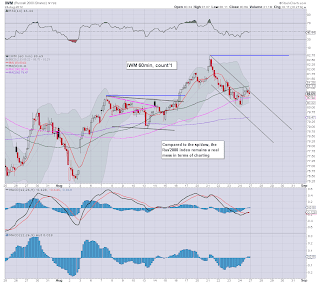 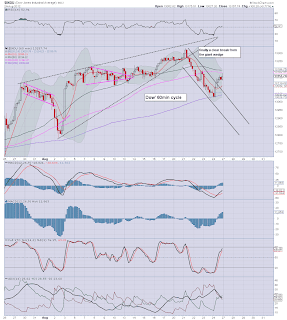 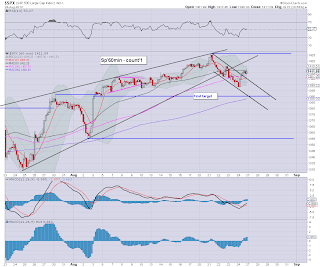 Very little to add, its been tiresome week of waiting. Bulls can claim 'we made a new high', whilst bears can claim 'net weekly declines'.

*I'll post a few other things later this evening, with something major on Saturday, otherwise for now....

Have a good weekend.
Posted by Trading Sunset at 21:02:00
Email ThisBlogThis!Share to TwitterShare to FacebookShare to Pinterest

2pm update - its getting dull again

Market almost fully claws back yesterdays losses  After all, we can't be allowed a down week, right? No volume, no fear....the algo-bots are back into melt mode. 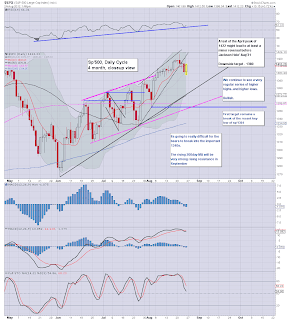 I suppose it could be argued those very few bears who exited at the open, are getting an opportunity to re-short right now. A simple stop would be 1427, or right 1415/20. Yet it is certainly not without risk.

The market will be fixated on the Bernanke next week, endless chatter on QE for September. Sigh.

*I'm not expecting anything in the latter few hours, market may as well close now.

More after the close.
Posted by Trading Sunset at 18:52:00
Email ThisBlogThis!Share to TwitterShare to FacebookShare to Pinterest

A minor bounce, partly its technical - the hourly cycle was due to break higher, but it seems there was some more Fed chatter/rumours out there this morning. 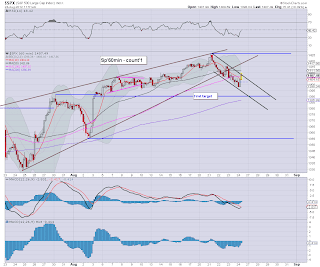 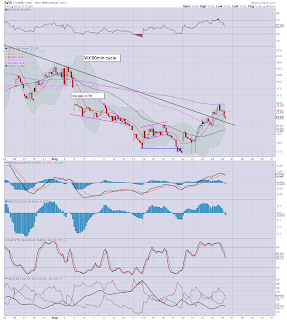 I believe all bounces are to be shorted until at least 1380, but at that level, we have the real risk of a major ramp post Jackson hole.

VIX might just be backtesting the upper channel line which is broke over  yesterday. If so, then the next target is somewhere around 18/19

More at 2pm
Posted by Trading Sunset at 16:53:00
Email ThisBlogThis!Share to TwitterShare to FacebookShare to Pinterest

Nothing dramatic, volume remains light, but the underlying momentum remains down, and likely will until the middle of next week.

*as I type, on clown network, the hostess (Melissa Lee) almost falls out of her chair when some guest analyst touts sp'1100/1000 next year due to 'a coming recession'. 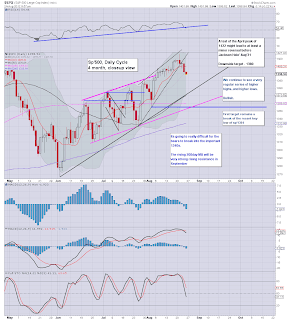 Not too much to add really, we're still on the slide...micro-rallies are being sold into, and it looks like the algo-bots are no longing able to melt this nonsense back upward.

First target remains 1390..then 80'.
--
Back at 12pm.
Posted by Trading Sunset at 15:00:00
Email ThisBlogThis!Share to TwitterShare to FacebookShare to Pinterest

Good morning. Futures are a touch lower, sp-4pts, we're set to open under the big '1400 level. All things considered, that's not a bad start for the bears.

*Durable Goods Orders: (ex-trans) -0.4% vs 0.4% expected.
There were also downward revisions, all somewhat negative for Q2/3 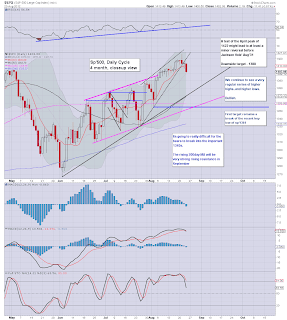 So, futures are suggestive we'll get a break under 1400, and maybe further weakness can at least briefly get us into the 1380s by the close.

I think bears should be able to get another few days downside, but with the Bernanke next Friday morning, I think a 'benny bounce' will occur..and it could be a big one.

More across the day.
Posted by Trading Sunset at 13:42:00
Email ThisBlogThis!Share to TwitterShare to FacebookShare to Pinterest

To close today, I thought I'd throw another new chart out there into the collective. There are no bold scenarios or price targets, this chart merely highlights an issue I think many struggle with - discerning the turn in the bigger cycles. 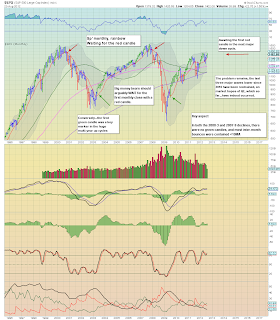 First, I'm using the rainbow chart style here, which is the 'Elder Impulse' system. I find it a good colourful way to more clearly highlight the broader trends.

There are quite a few things to note here...

You can clearly see the 3 big bubbles of the last two decades, tech, property..and now the paper/QE bubble.

The first two bubbles were pretty straightforward. Particularly interesting is that in both of the down cycles, we did not have any green candles. Also, the bounces were contained (almost always), below the monthly cycle 10MA. The floor in both cycles was marked with giant reversal blue candles.

Since the lows of March'2009 we've seen 3 pullbacks - with the latter being the more moderate one. As noted on the chart, it is because of the anticipatory nature of this market - forever looking for more QE, that the declines were not more significant.

So far, in each pullback, the Fed has subsequently delivered with more monetary easing/paper printing. Although yes, QE-twist - currently ongoing, is not new money as such, its merely 'bond curve' meddling.
--

I intend to highlight this chart regularly in the weeks ahead - and particularly at the end/start of each month.

What is absolutely clear, the bears need to see a closing monthly RED candle to suggest a grand cycle top is in.

As for how we end this August, a red candle seems unlikely, but blue is viable (the Dow, NYSE Comp are already blue). I think we'd need to close next Friday around 1380/75 to attain a blue candle.

On balance, it still seems the 'best bear case' this autumn would be for a decline to the lower bollinger, around the sp'1200 level, maybe a touch lower, 1170/50. I certainly would disagree with some of the doomers out there calling for sp' under 1100..or even 1000 before year end.

If there is anything that can be discerned from the previous two giant cycles, it is that it does take some considerable time to build downward momentum. Sure, if we can hit sp'1200 sometime later this autumn, maybe 2013 will indeed be the year the bears can go on the rampage. As it is, we have a green candle..and that is most definitely not bearish!

Anyway, I think the chart above is certainly something to consider.

Todays declines were very important for the bears, although they were certainly nothing to get hysterically excited about. We still saw the SP' put in another close over the big 1400 level, so the bulls can still be pretty pleased with how things are going.

With the VIX still in the mid teens, it can still be said there is no major momentum right now, so the current down cycle will almost certainly not amount to very much. 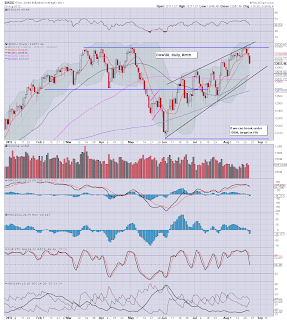 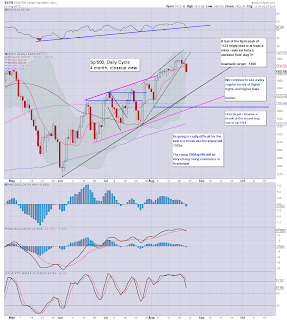 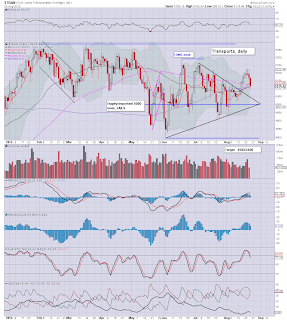 Reasonable declines today, but...its nothing dramatic, and bears should not get lost in the hysteria of believing the current decline from the sp'1426 high is something major.

Considering the weakness in the market, with such low volume, and a VIX that remains in the mid teens, I find it very unlikely we'll break much below 1380. There are plenty of others out there touting 1370/65, I suppose thats just about viable - before the Bernanke speaks next Friday morning, but I'll sure as hell not want to be holding any short positions around that time.

Right now, that'd be my best guess..pre-Bernanke @ the hole.