Another week higher for the main indexes, and it solidifies the gains from the New Years Eve snap higher. The SP'500 decisively broke, and closed above the mid-Sept' 2012 high of 1474, and this confirms the earlier breaks seen in the Transports, Rus'2000, and NYSE Comp. 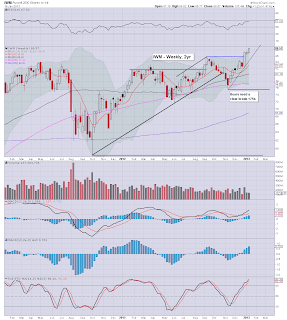 Another 1.4% higher for the R2K, and my wild consideration that we could see IWM in the 100s this year is certainly becoming less 'crazy talk' with each passing week.

The weekly and monthly R2K charts are 100% bullish, and there is empty air 'to da moon'. 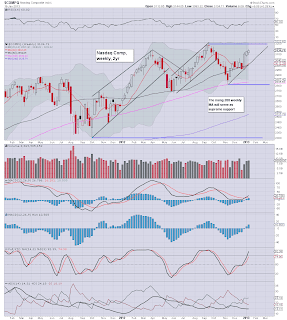 The tech sector continues to lag, not least due to AAPL - which remains almost 30% below its $701 high. Yet even the Nasdaq is battling higher, and is only 2% away from breaking the Sept'2012 highs.

A retracement could occur all the way down to 3050/25, without breaking the lower channel, and that's a good 4% lower. Bulls will obviously like to see the Nasdaq confirm the breakout as seen in the SP'. 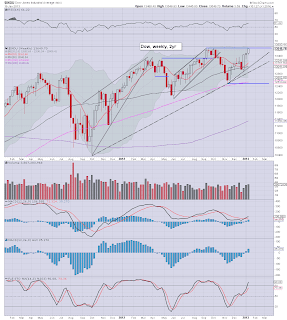 The mighty Dow is only 12pts away from breaking the Sept' 2012 highs. Even a retracement down to 13100 would not do any damage to the broad upward trend.

It would seem likely we'll see the Oct'2007 Dow high of 14198 challenged within the next few months. No doubt, that will please the cheer leaders on clown finance TV, and confirm their belief that the Bernanke 'saved the economy'..if not the entire world (or..even Galaxy?). 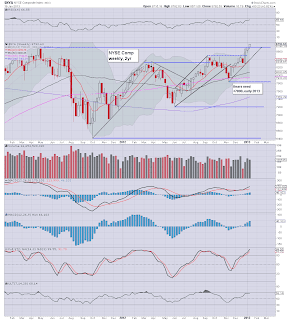 The master index is holding comfortably above the old resistance/highs. Absolutely bullish. It is somewhat amazing to realise that the NYSE Comp is now 37% higher from the Oct' 2011 lows. 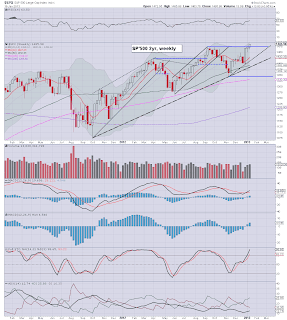 The all important sp'500 confidently cleared the sp'1474 high after a few days of trying. The weekly close was very bullish, and the mid-term trend is absolutely suggesting we'll be trading in the sp'1500s in Feb/March.

The bulls have plenty of buffer on the downside. Even a move down to the 1430s does NO damage to the current upward trend. Everything is now outright bullish about the sp'500. 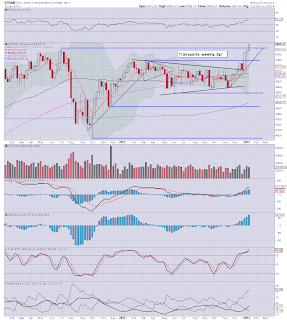 The break higher in the transports in mid December was indeed the leading warning of a major new wave higher in the broader US markets. The weekly close was exceptionally bullish, and the big 6000 level looks set to be hit in the next month or two.

The underlying MACD (blue bar histogram) cycle is certainly getting a little extended right now. However, even a multi-week pull back down to the low 5400s would do no damage to the mid-term trend. Indeed a back test of the old resistance/highs would be something the bulls should be seeking.

So, yet another week higher for the main indexes. With the SP' joining the Trans, R2K, and the NYSE Comp, I've seen more than enough now to confirm we are seeing a massive break higher in the entire US equity market.

The Dow and Nasdaq will no doubt see similar breaks higher in the coming weeks, and perhaps then begin a race to catch up to match the much stronger gains seen in the transports and Rus'2000.

As a permabear, I have to say I am keeping in mind the 'free money' (45bn of POMO) the Fed is now creating each month, and if most of that makes its way from the primary (bond) dealers into equities, then this market is just going higher.

Sure we could see a major multi-month wave lower at some point this year, but that will do nothing to negate the primary trend..which is unqustionably higher.


Where is that retracement ?

Since we were brushing up against the old 1474 high - two weeks ago, the big issue is when will the next retracement occur? With the break >1474, and the weekly close of 1485, its still a major unknown.

As things are...if we go no higher..the current Fib' levels are... 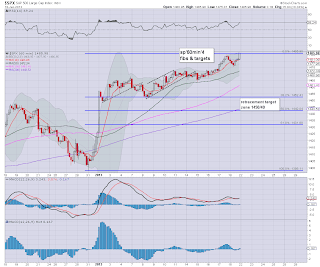 I'd have to guess we would take out the recent 1451 low, and thus the issue would be, do we get stuck around 1440 or 1430. The low end of the SPY/ES gap is at 1425..so a very brief floor-spike - washing out the weaker bullish hands, would be kinda understandable.

On any basis I do NOT expect a break below the December sp'1398 low, and indeed, I am now highly confident we'll see sp'1500s in late February or early March.

Indeed, if they can push out the debt ceiling issue until late April/May, then we could easily be trading in the mid 1500s..and be close to challenging the all time high of sp'1576.

--
A little video bonus - highlighting the deep political/philosophical divide, particularly the bizarre notion that 'free market capitilism' was to blame for the 2008 financial collapse

Suffice to say, when did we ever really see a western government permit a 'free market' in the last hundred years anyway?

*I will likely post something on Monday, whilst the market is closed, and his imperial highness is being re-crowned.

Good wishes from land of Her Majesty.
Posted by Trading Sunset at 19:44:00
Email ThisBlogThis!Share to TwitterShare to FacebookShare to Pinterest

The main indexes saw opening weakness again be negated by an afternoon rally. Once again, the Transports and the Rus'2000 closed at historic highs, with the sp' closing next to the upper channel line. Mid-term outlook remains bullish, with sp'1500s seemingly likely in February - even if we see a minor retracement into the sp'1440s. 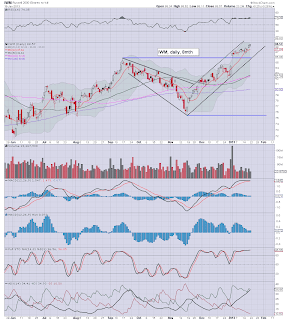 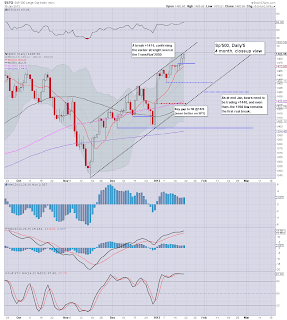 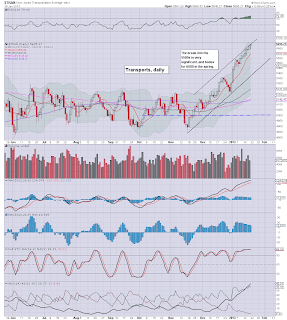 Once again another day where we saw some moderate weakness in the morning, but as we moved into the afternoon....the recovery kicked in...and we closed moderately higher.  Its getting somewhat predictable!

The week certainly closed well for the bullish maniacs, and sp'1485 is a level not many were expecting for this January opex.

We still have 8 trading days left of the month, and during that time, we could easily see a retracement down to the sp'1440s, with VIX back in the 16s..perhaps even 17/18.

Thats it for today....have a great weekend!

--
*next posting will be late Saturday, very likely on the US weekly index charts.