The VIX closed 7% higher to 15 today, whicu is still a remarkably low level though.  Even a move to VIX'16 looks difficult tomorrow, never mind the notion of a multi-day VIX rally to the July high of 21. 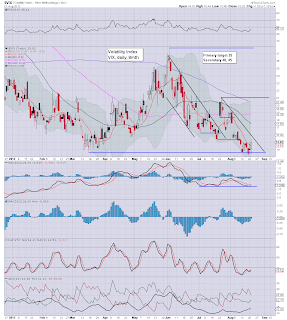 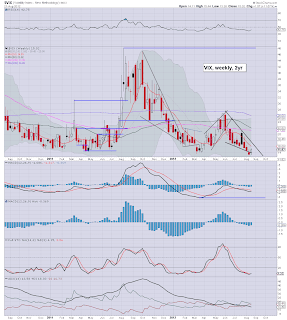 Until the market is below the recent cycle low SP'1354, any VIX increases are to be treated with high caution.

From a doomster perspective, I remain very much in the mindset of 'give me a call if ya see sp'1340s, with VIX 21+'. Until then...it remains a tricky and dangerous market for the bears to be part of.

More later.
Posted by Trading Sunset at 22:30:00
Email ThisBlogThis!Share to TwitterShare to FacebookShare to Pinterest

Finally, a proper red close for the market. After two weeks of waiting, this red colour is a welcome delight for those who been scaling into short positions recently. Although it has to be said, any 'serious' money would have got the boot after the market briefly broke above 1422 this morning.

The VIX confirmed the index declines, but remains so very low. 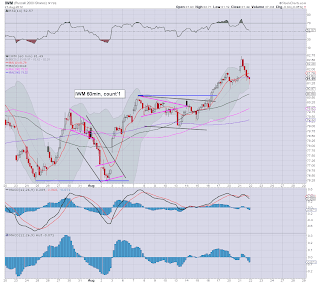 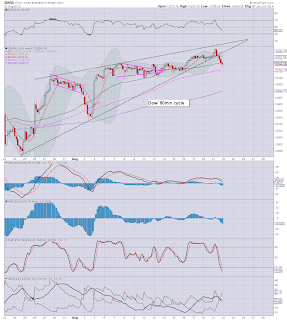 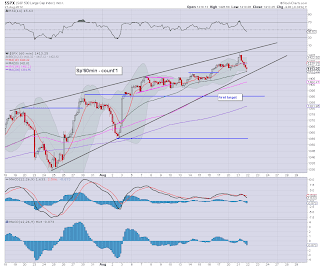 The Rus' and Transports remain a mess to chart. The dow has clearly broken the giant wedge, with the SP' set to do it tomorrow.

The closing hour, and for the first time in 13 trading days, we might actually get a proper red close.

Bears should be seeking a close under the 10MA of 1409. That's not going to be easy to attain today. 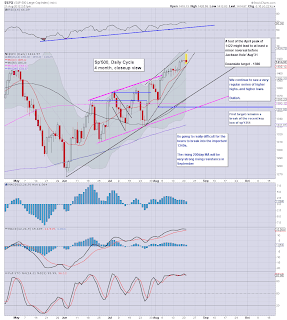 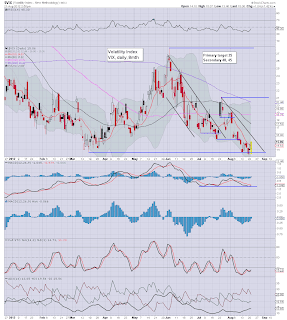 With the FOMC minutes to be issued tomorrow, Mr Market does have something to churn over for the rest of this week. QE3 is not coming pre-election, that much seems assured right now.

So, lets see if we can actually close red...it'd be a real bonus to close 1408 or lower.
--
More after the close.
Posted by Trading Sunset at 19:52:00
Email ThisBlogThis!Share to TwitterShare to FacebookShare to Pinterest

2pm update - reversal, but a small one so far

Yes, a reversal appears to be underway, lead by none other than AAPL. Yet, we can be clear about one thing...any declines are not to be trusted until we're back in the 1340s. Frankly, that seems near impossible between now and Jackson hole next Friday. 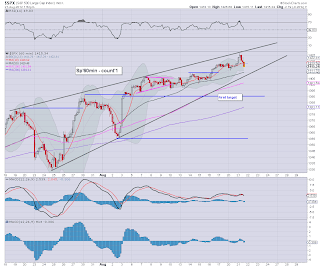 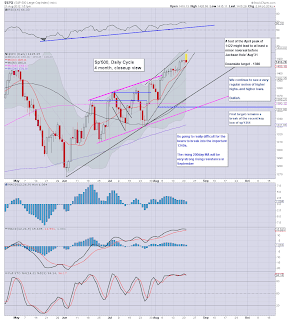 Bears should be looking for a close under the daily 10MA of 1409.  Considering the action of the past few weeks, even a 10pt decline on the Sp'500 looks pretty 'hopeful'.

Stay tuned.
Posted by Trading Sunset at 18:54:00
Email ThisBlogThis!Share to TwitterShare to FacebookShare to Pinterest

The low volume melt continues to a large extent, although there are a few signs of weakness out there right now.

VIX remains in wonderland, and it is arguably to be ignored until its at least back above 17/18. 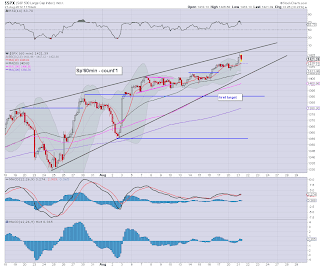 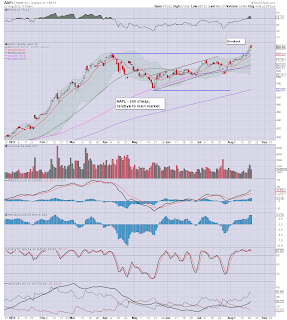 We seem to be getting some micro-reversal at the moment, arguably a result of a near-hit of the upper trend/channel. First target in any multi-day down trend remains 1390.
-

AAPL is offering a little entertainment. Yet, the daily 10MA is $636, that is an awful long way down, and unless the bears can break that (which seems unlikely), the up trend can still be said to be very much intact.

*we have the FOMC minutes released tomorrow, so that will likely increase market action, not that it could get much lower anyway.

Stay tuned
Posted by Trading Sunset at 16:56:00
Email ThisBlogThis!Share to TwitterShare to FacebookShare to Pinterest

We have seen the April high taken out on the SP', but so far its only by 0.7pts. Also, other indexes are all trailing this minor break higher in the sp'

Yet, as I been noting for a few weeks now, the primary monthly trend is up. 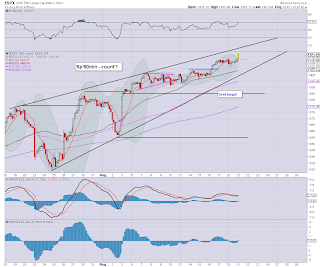 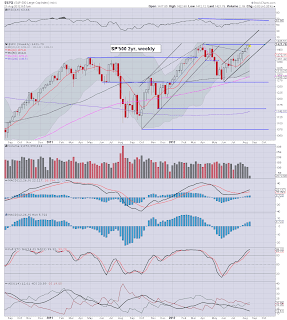 With Jackson hole next Friday, this remains a lousy time to be short. There just doesn't seem to be much point being involved in this until after the labor day holiday of Sept'3.

*notable stock movers... BBY, FB, and URBN
--
Next update around 12pm.
Posted by Trading Sunset at 14:54:00
Email ThisBlogThis!Share to TwitterShare to FacebookShare to Pinterest

Good morning. Futures are sp+4pts, we're set to open around 1422. It looks like we'll break the April peak for the SP'500. The transports and Rus'2000 are still notably lagging behind, but are catching up. 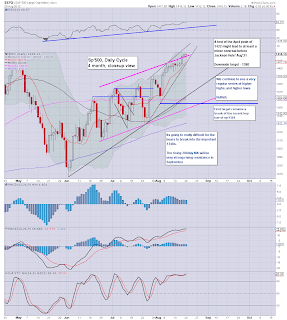 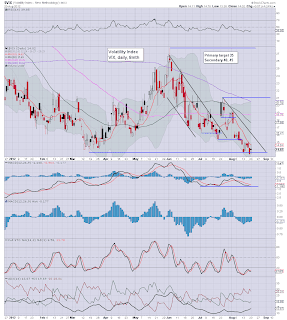 So, we're set to open around the big April peak. Where will it stop?The upper bollinger on the monthly chart would suggest we could be as high as 1450/60 by mid September. The daily chart is a clear wedge, you'd think we'll at least break a few percent lower this week, but so far...no sign of that!

VIX remains in twilight zone territory. Only with a break back over 17 can any up move be taken seriously, and even then, the bears can't get excited until VIX 21+. That seems a long way up right now.

Posted by Trading Sunset at 14:17:00
Email ThisBlogThis!Share to TwitterShare to FacebookShare to Pinterest

Whilst the broad market continues its latest zero-volume rally since the June low of sp'1266, lets close today with highlighting the key trend changes the bears will need to see in the months to come. 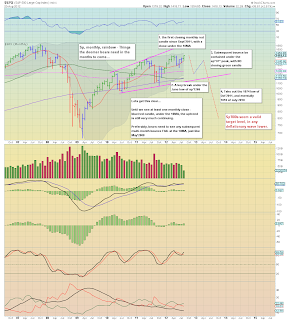 *don't get fixated on the forward price scenario, its just one of many outlooks.

So, lets start with what many of the doomers (across oh so many websites/blogs) these past few weeks are largely refusing to acknowledge - the trend is currently outright bullish for the sp'500. Sure, not all indexes are as bullish as the SP'500 or the Dow'30, but..the Sp'500 is arguably leading the way. Even the transports/Rus'2000 are starting to catch up this past week.


Things the bears need in the months ahead...

1. A closing monthly candle back under the 10MA...blue..or preferably red.

*as it is, I'd guess we will close August green, and we'll open Sept' green, it sure won't be easy to close Sept' with even a blue candle - whilst the 10MA rises to around 1360.

2. Take out the recent June low of 1266. I do still think this is very viable, although I think 1225/00 is the very best bear case right now - and that's assuming the market gets upset for 'some reason'.

3. Even if we can get down to 1200, its likely we'll see a multi-month bounce - especially leading into the Christmas period. Bears should look for a FAILED monthly close over the 10MA at some point in 2013 That is a critical aspect, and indeed it was a key warning of trouble in early 2008.

It looks like we'll just continue to melt upward into mid-September. We certainly have a few events in the coming months, but for the moment, there seems no change of significant downside, certainly not below the recent important low of 1354.

There is certainly the possibility of a 'Sunday night event' in the coming months, and so I guess a few traders might like to buy a few VIX call blocks, or index put blocks (both way out of the money), but frankly...for most people, there is no point. 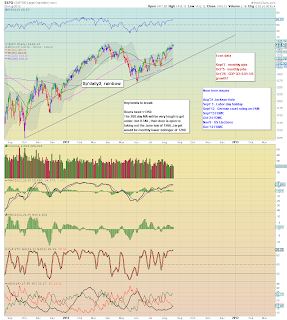 For now, the primary monthly trend remains UP.

*Until volatility picks up (back above 20), updates will be less. I don't expect any significant volatility until mid September.