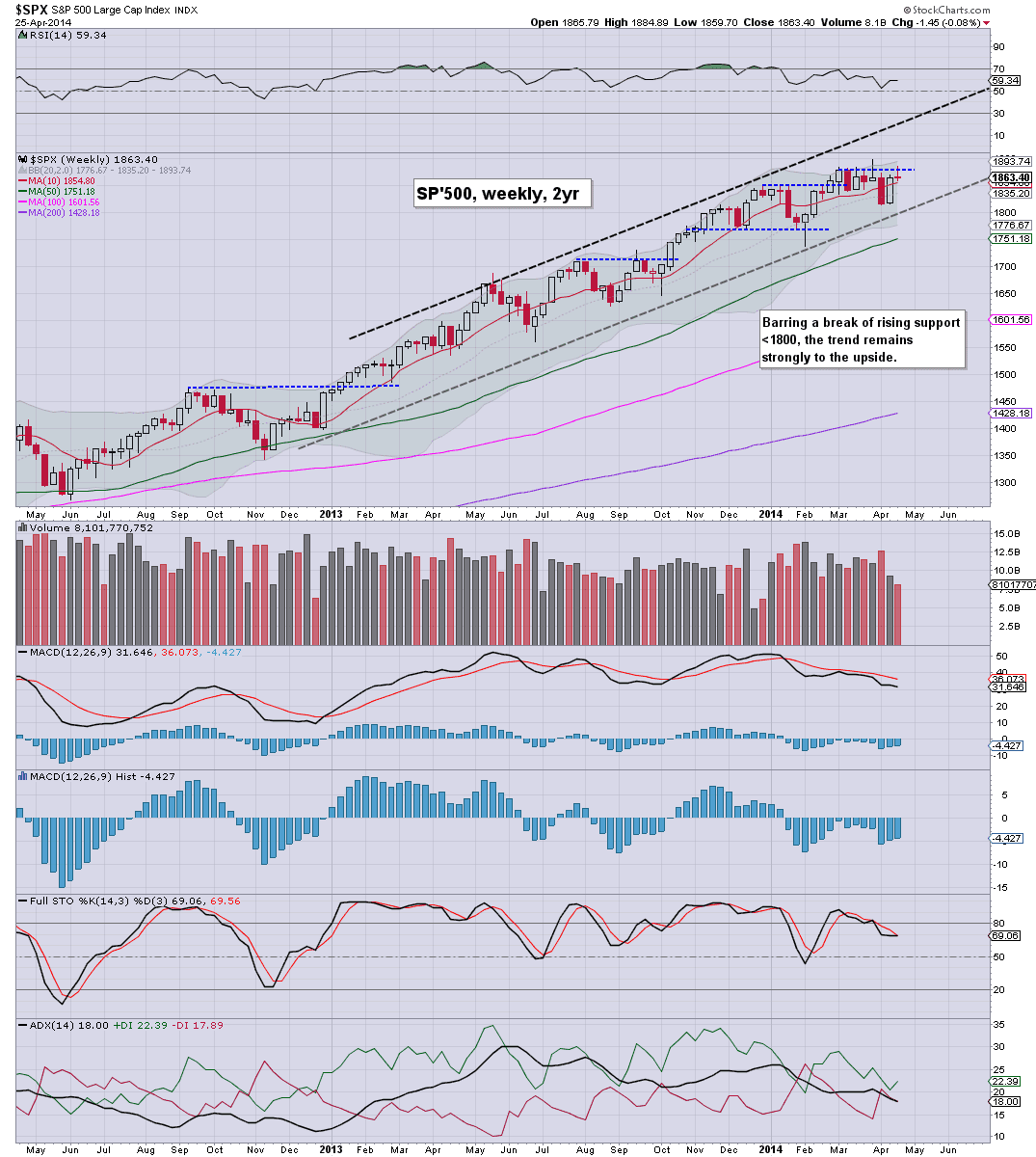 The sp' was only fractionally lower this week, -0.1%. Equity bulls did achieve a second consecutive close above the weekly 10MA of 1855. Upper bollinger is offering the 1890/1910 zone next week. Underlying MACD (blue bar histogram) cycle ticked higher for a second week, but is still negative cycle.

Barring a break under the recent low of sp'1814, equity bears can't get excited about any of the recent weakness. 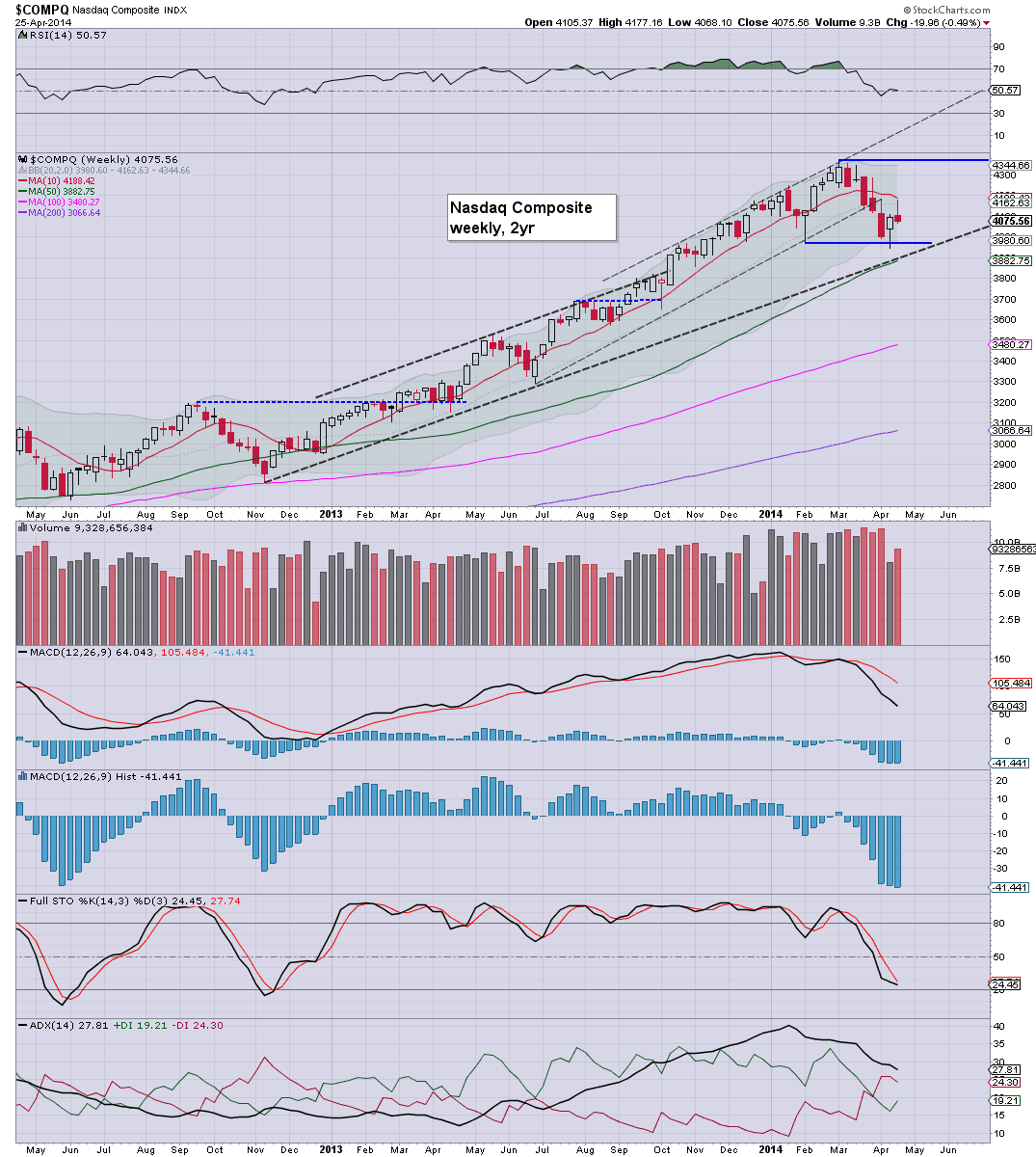 The tech' slipped a minor -0.5% this past week. The underlying MACD cycle is now deeply negative, although the RSI is still at 50, which is typically half of where it could fall. The rally earlier this week failed to break the weekly 10MA, and that is certainly a somewhat spiky-fail candle.

First downside target for the equity bears should be a break back under 4000 - a mere 2% lower, but that won't be easy. 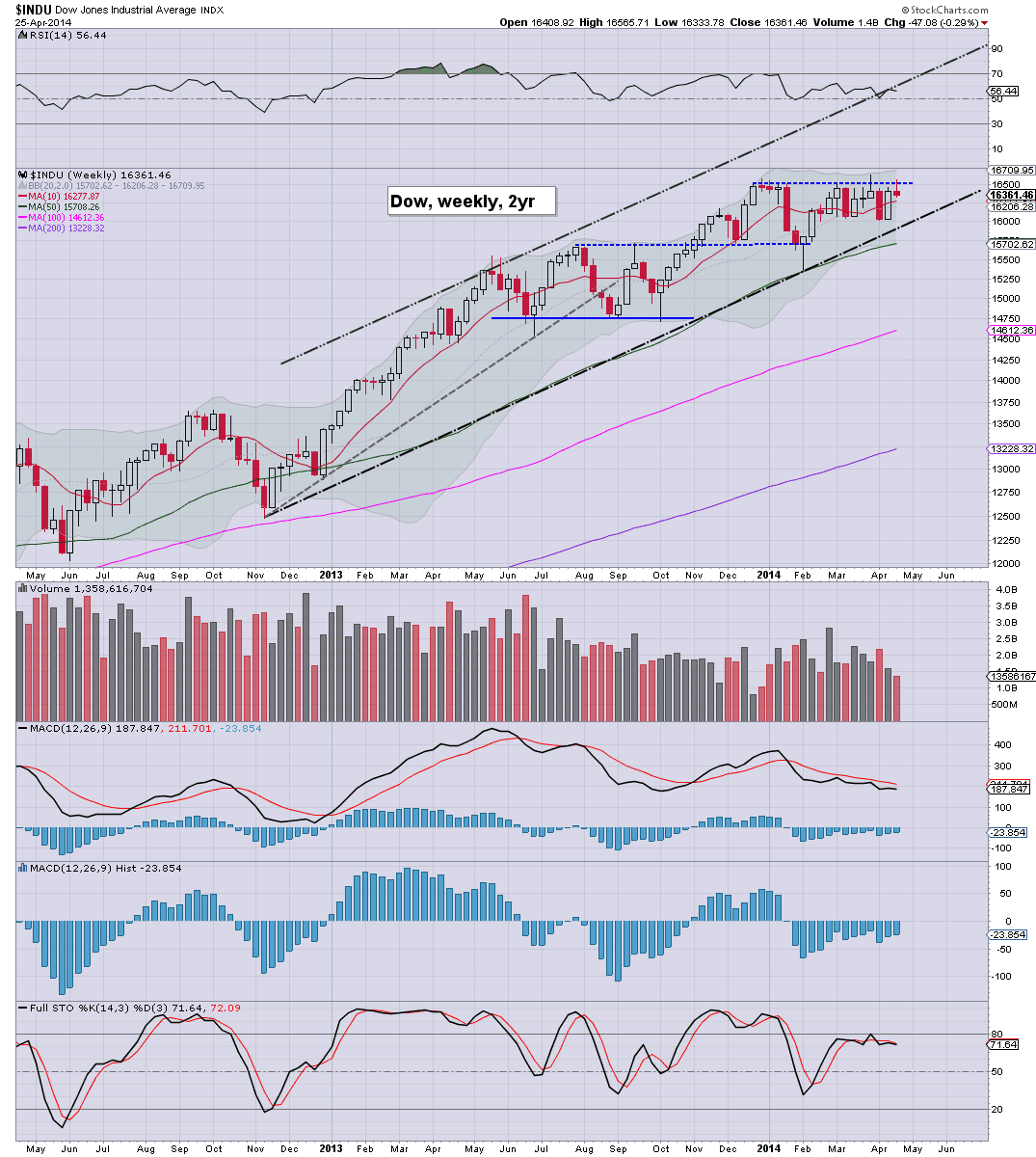 The Dow saw a very minor decline of just -0.3%. Importantly, the equity bulls did manage a second consecutive close above the weekly 10MA. Underlying MACD cycle ticker higher, and there is a very viable chance it might turn positive in early May - which would likely equate to new historic highs in the 16700/800s.

Equity bears need to break <16000 to have any justification to get confident about more significant declines this summer. 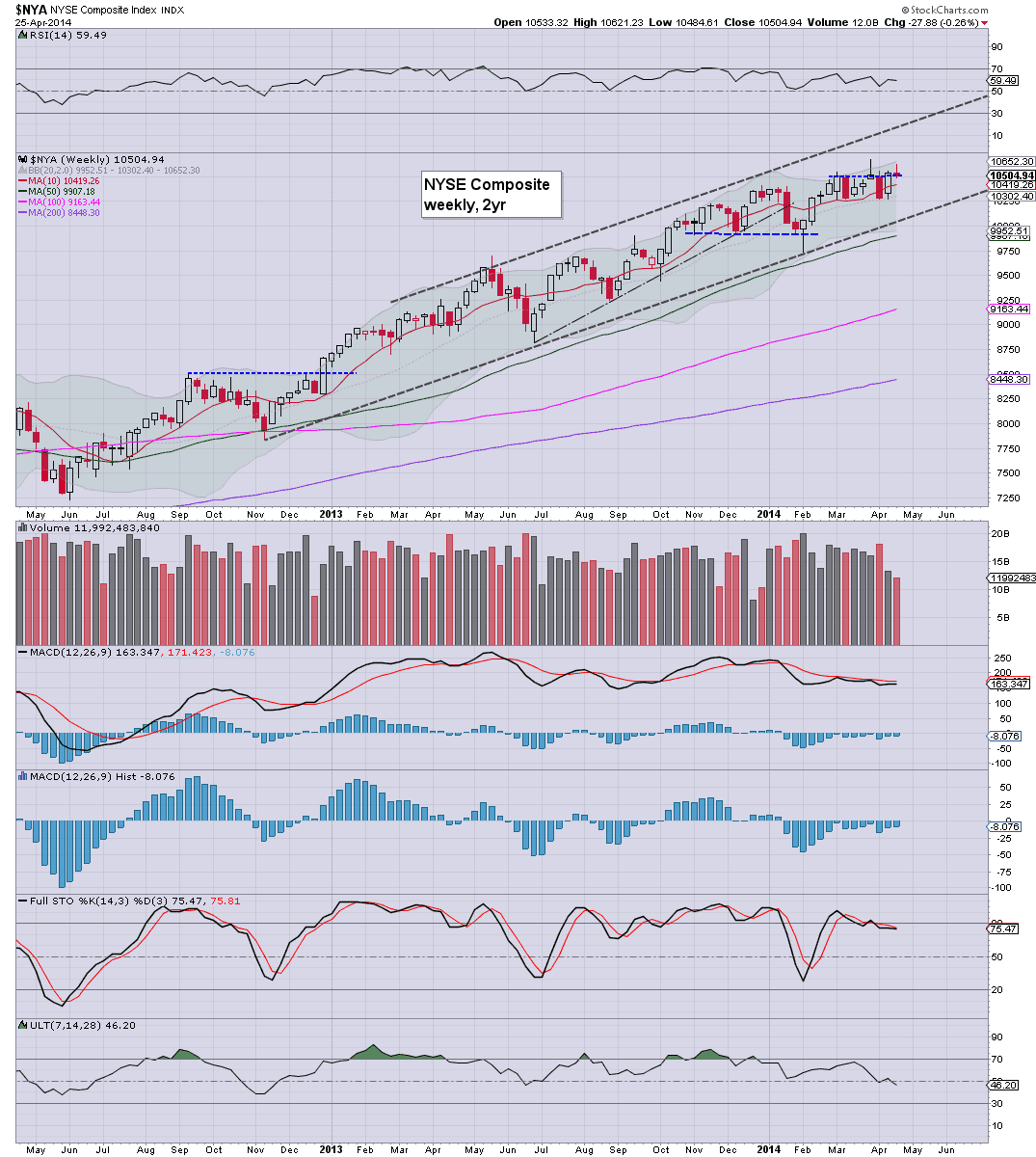 The master index slipped around a quarter of a percent this week. The weekly close in the 10500s was a reasonable achievement for the equity bulls, and there is near term upside to the 10600/700s within the next week or two. 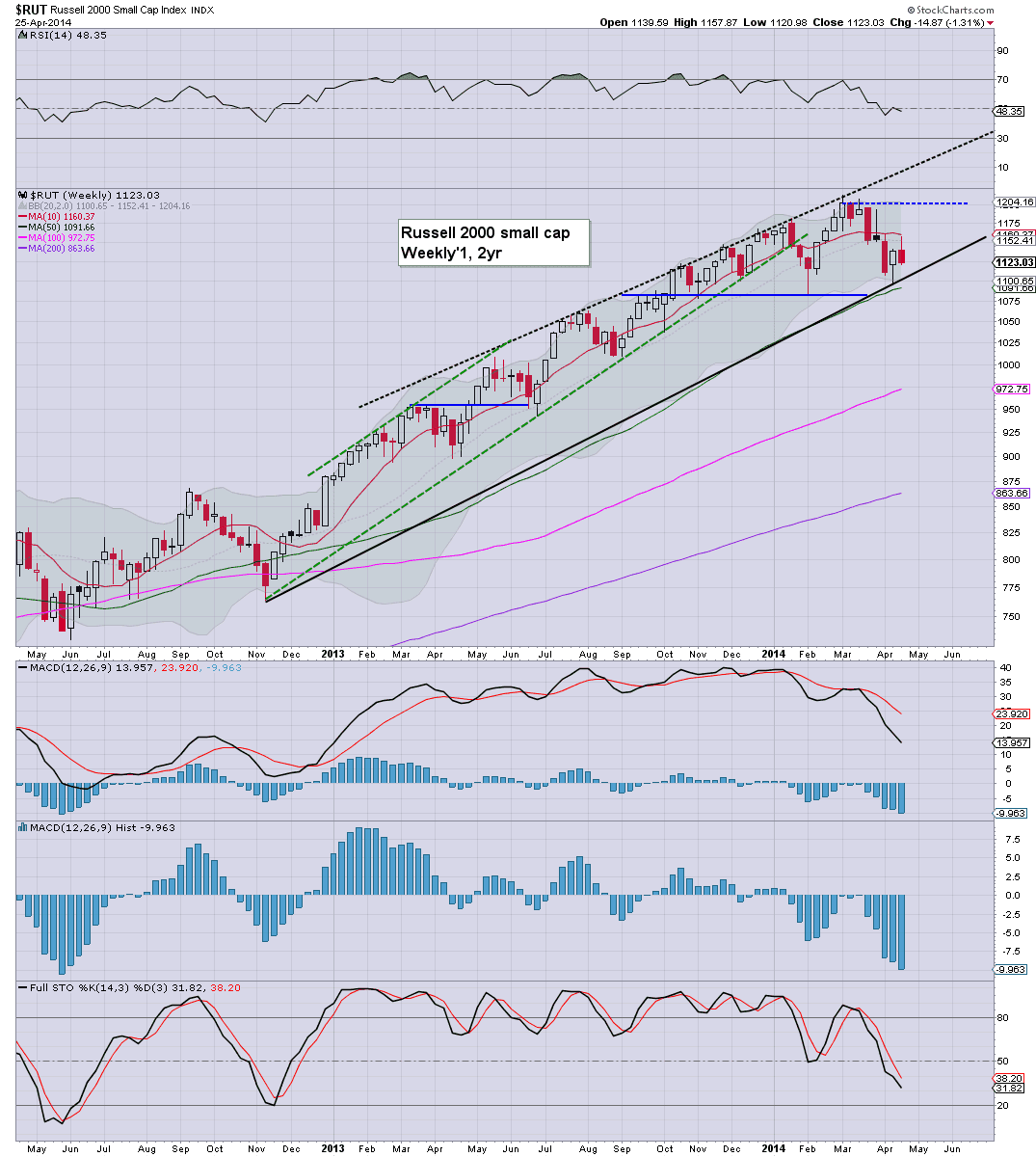 The second market leader fell -1.3% this week, and is less than 2% away from causing more serious trouble for the equity bulls. Any break <1100 would be a major break of the primary trend, and open the door to the giant 1000 threshold this late spring/early summer.

There are some chartists who are seeking a H/S formation for the R2K/Nasdaq, and that scenario is still intact. Underlying MACD cycle is deeply negative, and frankly...it would be surprising if we don't see some sort of multi-week bounce from here.

Regardless of any intraday waves next week, the 1100 threshold will be key to keep in mind. Worse case for the bears, a renewed push to new highs..to the 1250/1300 zone. 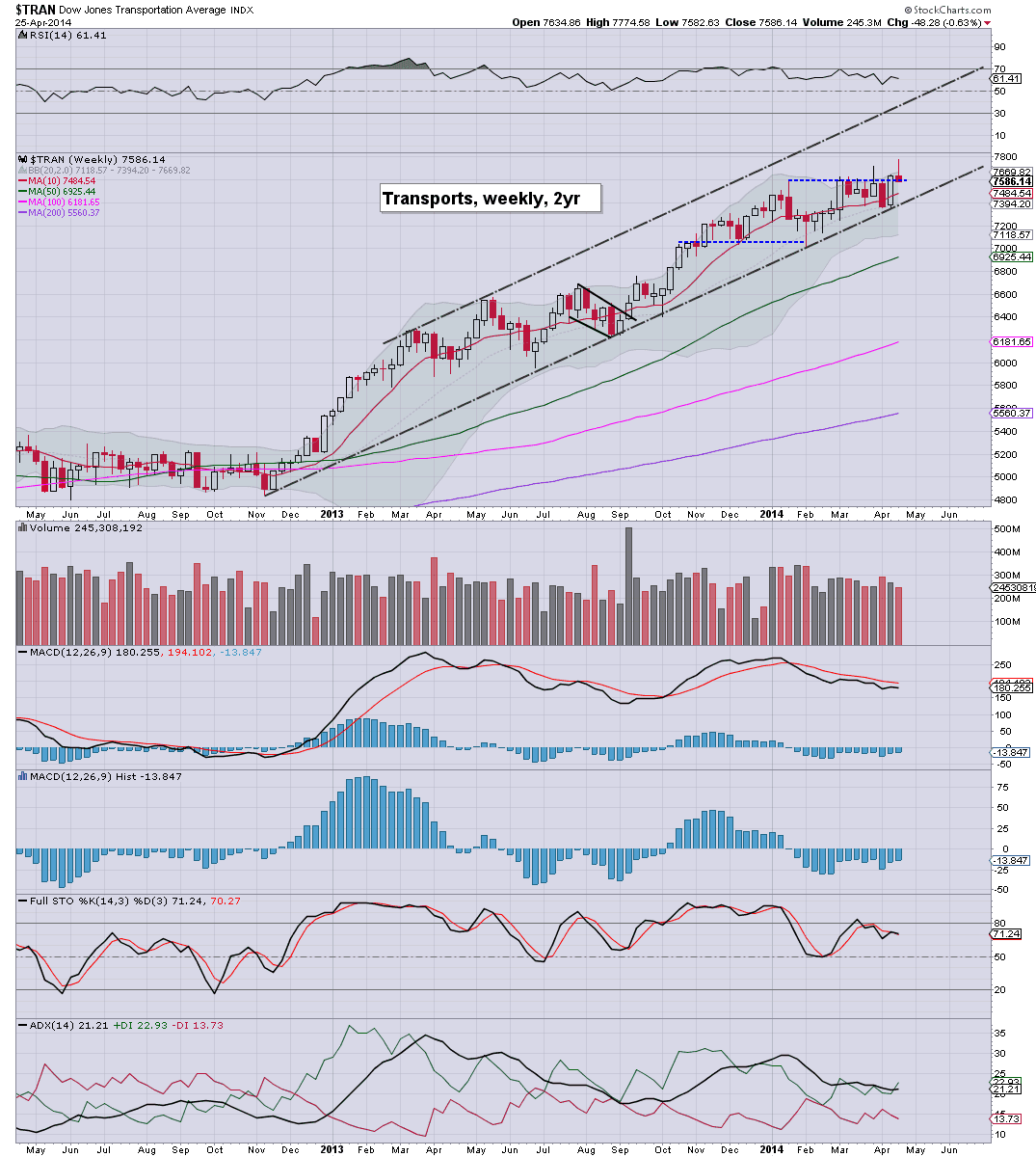 The old leader fell -0.6% this week, although notably, the Trans did break a new historic high of 7774. The weekly candle was something of a bearish spiky-top, an inverse hammer. Equity bears will need to break the recent low of 7346 - some 3% lower, before the primary upward trend is broken. That does not look likely.

So...net declines for all the US indexes, but..the declines really weren't that significant (even after the Friday declines). For me, what is especially notable is that the Trans - the market leader, even made a new high this week.

Unless the equity bears can take out the lows - equiv' to sp'1814, then the primary trend does indeed very much remain...bullish.

Next week is going to be an action packed week. However, the week begins with just a little housing data. Tuesday will see Case-shiller HPI and consumer confidence.

The big day next week is Wednesday. First, we have the ADP jobs data, but more importantly, the first reading for Q1 GDP. Yet even bigger than that data point is the FOMC announcement - due 2pm. Mainstream consensus - which I agree with, is for QE taper'4, bringing monthly QE down to $45bn a month beginning May'1st. There will NOT be a Yellen press. conf' following the announcement.

Thursday will see Yellen talking in early morning - whose comments might indeed be taken by Mr Market as an excuse to move.

The week concludes with factory orders and the big monthly jobs number. As ever, how Mr Market interprets the data is almost as difficult to guess, as to what the number itself might be. Arguably, anything >175k net gains, would likely be deemed 'acceptable' by the mainstream.

*there is sig' QE-pomo: Mon/Tue, both around $2bn. The new QE schedule will be issued at 3pm on Wednesday.
--

With just 3 trading days left of April, the sp' is only lower by around 9pts. 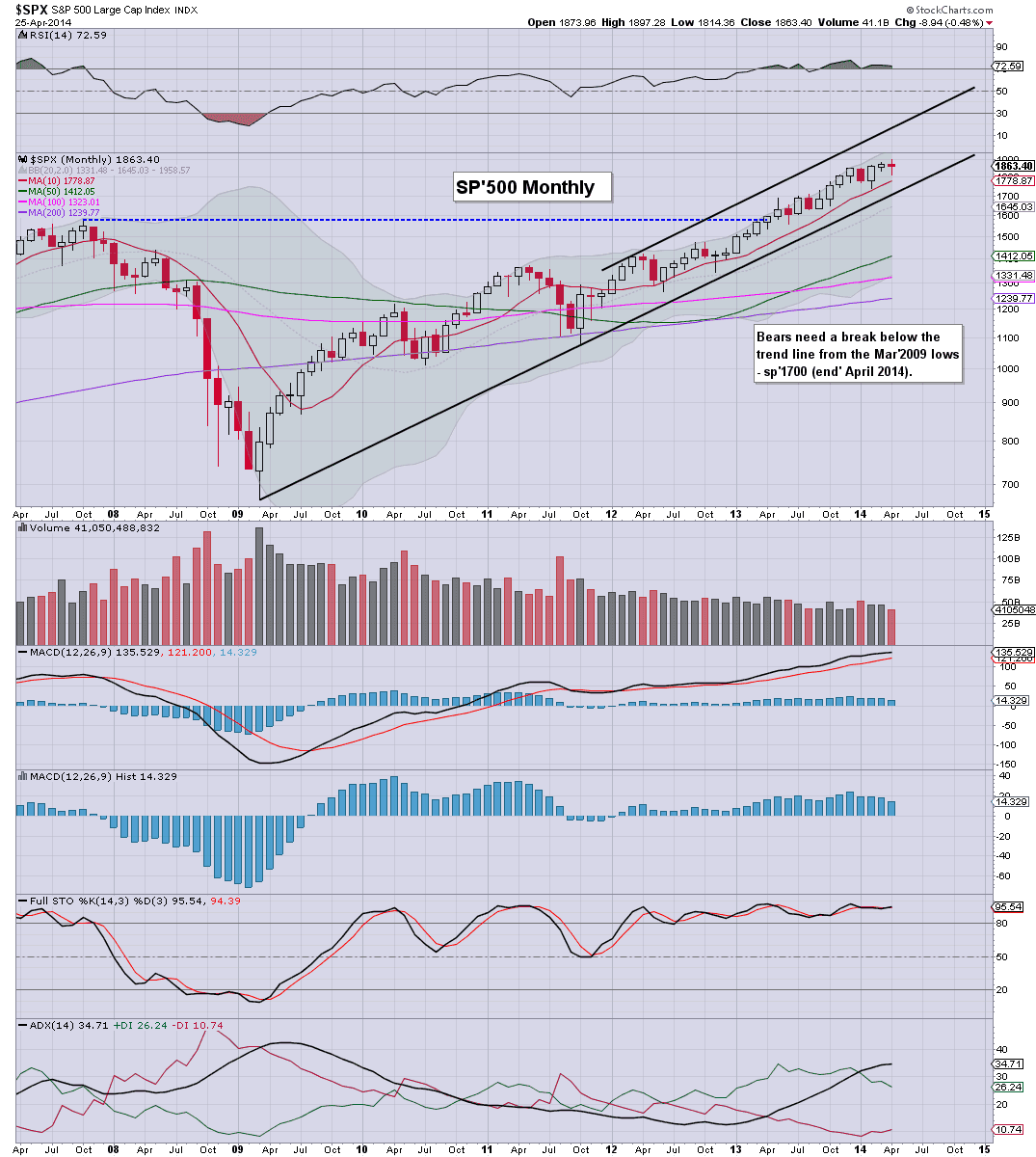 Even if the bears do manage to hold a net monthly decline by the Wednesday close, the first real support is the 10MA, and that is all the way down at 1778. For the bulls, the upper bol' is offering the sp'1960s, but the weekly cycle will be holding the line at 1900/10 into early May.

Underlying MACD cycle is ticking lower, and price momentum is slipping toward the bears. At the current rate, the indexes are due to turn negative cycle within 2-3 months. So..for those seeking a major inter'3 top, there remains good opportunity this summer.

Yours truly is holding long (and short) across the weekend. I'm long via CHK and STX, and short Silver, via SLV. I'm hopeful those will work out across the next week or two. Further, I'm also seeking to pick up another position in RIG. I hold an upside target of 46/47, so another entry in the low 42s would be very tempting.

As things are, I'm reluctant to meddle in the indexes themselves, and will certainly leave the VIX well alone. Barring a break <sp'1814, I will hold to a near term outlook of further upside, into the sp'1925/50 zone by late May/early June.

As ever, comments are most welcome. Have a restful weekend, next week will be busy!


-
Posted by Trading Sunset at 17:00:00
Email ThisBlogThis!Share to TwitterShare to FacebookShare to Pinterest

Despite some interesting equity weakness into the weekend, the broader up trend most certainly remains intact. The bears can't even get moderately excited until the recent low of sp'1814 is broken. Even then, the more important cyclical low to break is 1737. 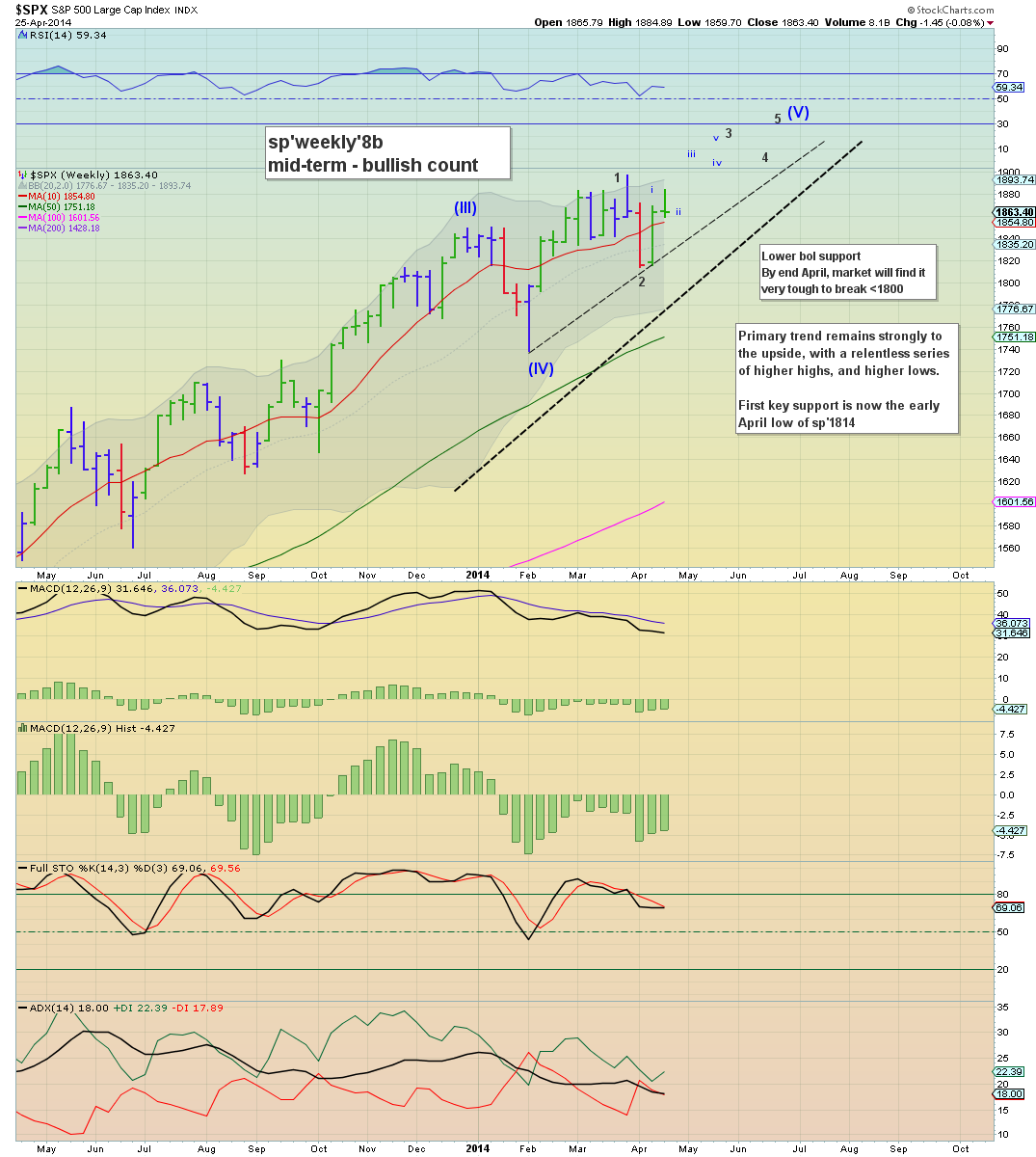 As for next week....well, I'll deal with that over the weekend. Many thanks to all those who said hello this week, it makes all the difference.

The weekend post - late Saturday, will cover the US weekly indexes
Posted by Trading Sunset at 04:00:00
Email ThisBlogThis!Share to TwitterShare to FacebookShare to Pinterest

US indexes closed pretty weak, sp -15pts @ 1863. The two leaders - Trans/R2K, settled lower by a very significant -1.6% and -1.9% respectively. Near term outlook is for renewed upside next week, with the most bullish upside target zone of sp'1925/50 by late May/early June. 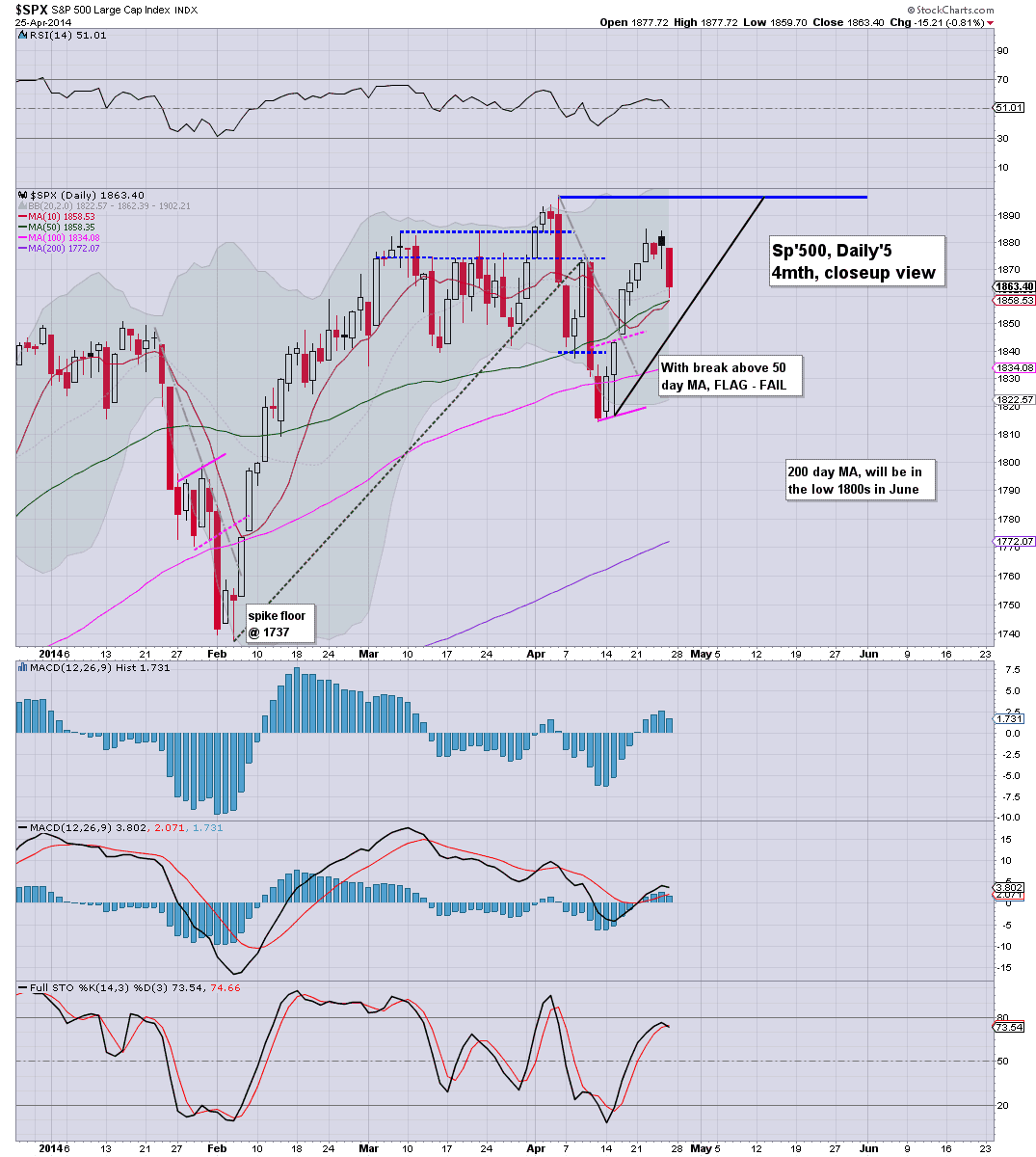 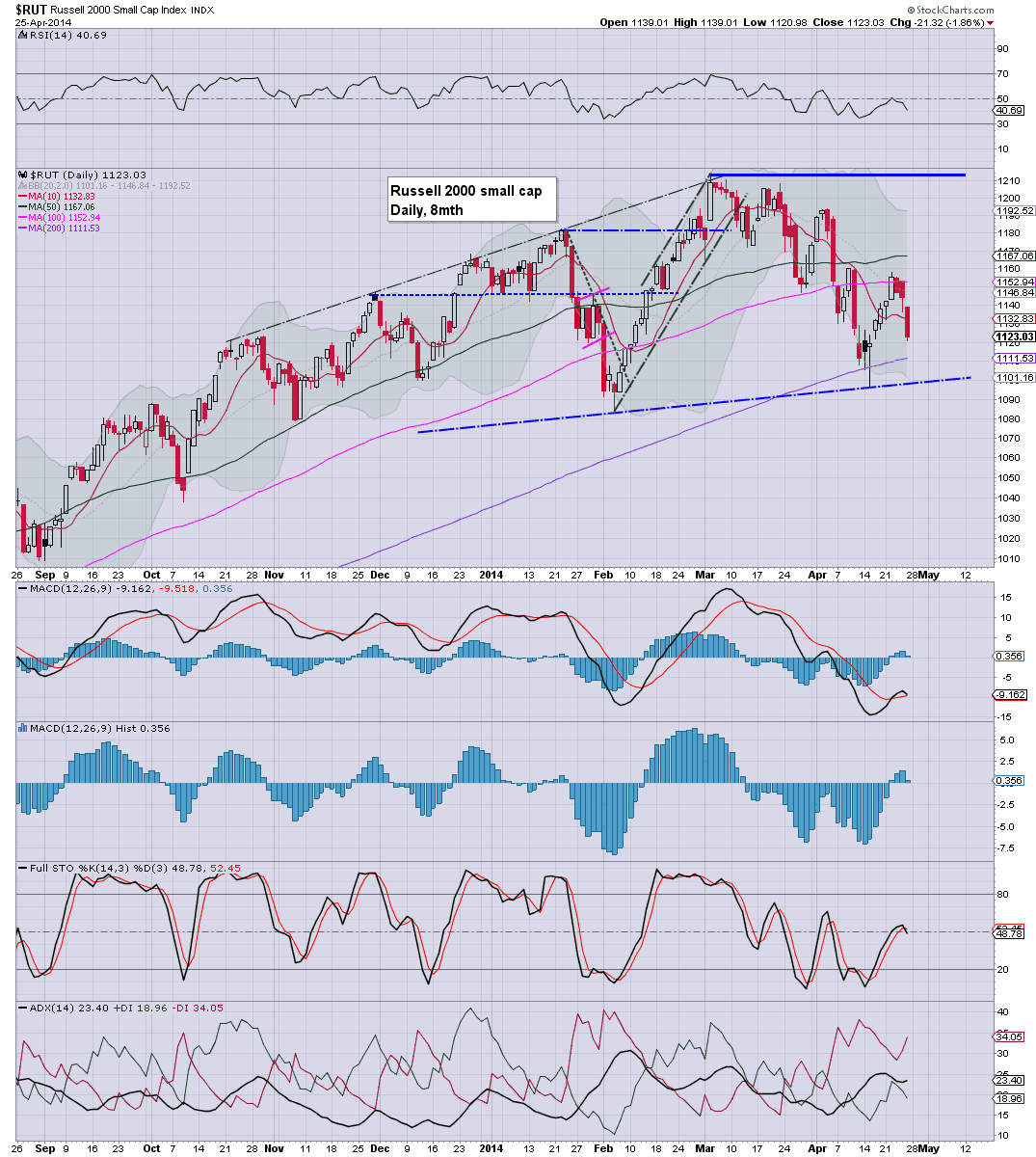 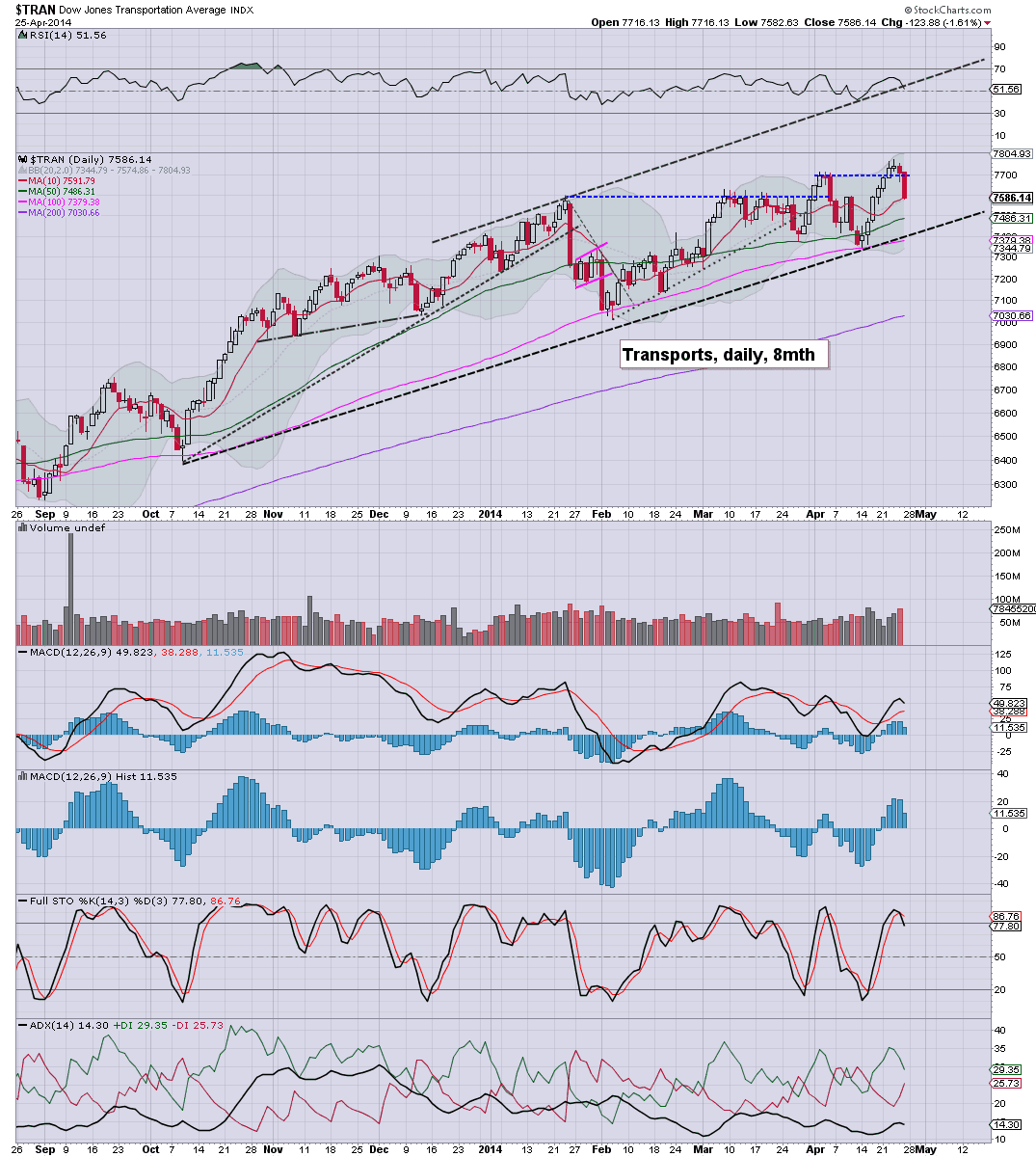 An interesting bout of weakness to conclude the week, but still, the broader market is holding the bigger upward trends.

Barring a break <sp'1814 next week, I can't take any of the declines seriously. Monday could easily open a little lower, there is a clear gap zone of sp'1845 - with VIX 15s, but for me, that would merely be a buying level - at least on an intraday basis.
--