Volatility stuck in the mid 13s

With the indexes seeing latter day melt into the close, the VIX naturally slipped lower, closing -1.4% @ 13.52. The VIX has been effectively in sideways chop for the last 5 trading days, which is actually somewhat impressive, with the main indexes continuing to rally. 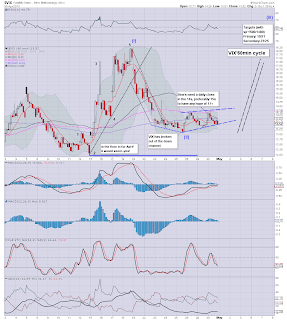 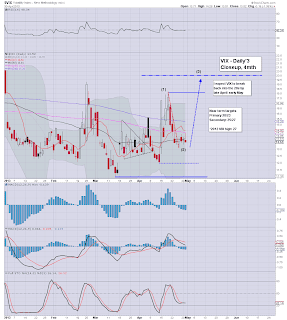 Suffice to say, the VIX is largely powerless right now.

I'm still seeking a VIX jump...but until those initial levels are hit, hopes of 20s, have to be put back on hold...yet again.

The main indexes all closed moderately higher. The Nasdaq was especially strong, lead by AAPL which managed to close around 3% higher. VIX failed to hold the earlier 14s, and it remains an entirely complacent market. The Oil/Gas market was the only weak aspect. 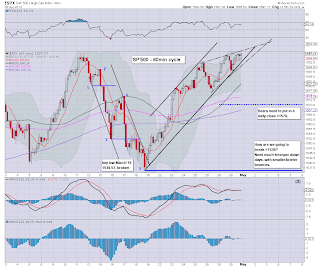 The sixth consecutive monthly gain for the SP, although the two leading indexes - Trans/R2K both saw moderate declines.

*SP' fractioanlly takes out the April' high of 1597.35, and technically speaking, that merely confirms the action in the Nasdaq of the past few days.
-

3pm update - another lousy month for the bears

April is coming to a close, with just one trading hour left. The SP' has broken new historic highs this month, and the VIX remains in the low teens. QE-POMO continues each and every day, and despite genuine recessionary data, the market won't significantly fall. For the bears..April was just another month of failure. 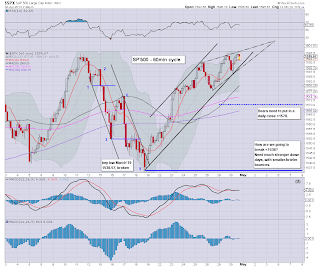 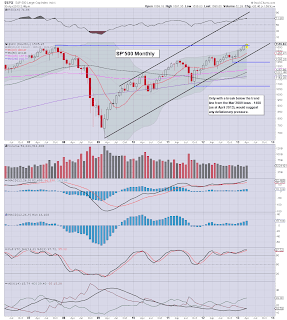 For the bears, even the notion of falling 10% looks 'too far'. Even the decline of two weeks ago was a pitiful 4%.
-

3.18pm..here is something for the remaining doomer bears out there.. 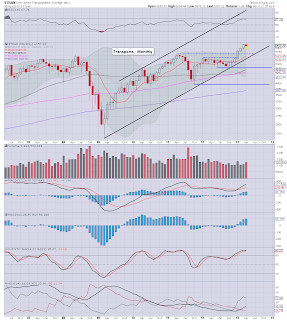 3.40pm... AAPL closing the month....net flat, although its $59 above the recent low.
Posted by Trading Sunset at 19:53:00
Email ThisBlogThis!Share to TwitterShare to FacebookShare to Pinterest

Market is holding just a fraction below the April'11 high of 1597.35, but then, the Nasdaq is already above that high. The only weakness out there now is in the Oil/Gas market. VIX still failing to show any power, and a close in the 14s now looks out of range. 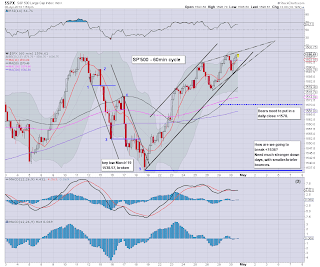 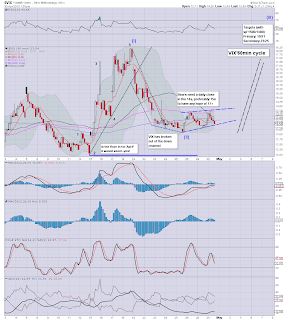 All that is clear, is that there is simply no power on the downside. Sure we could drop into the 1580s again, but that counts for nothing.

Perhaps the weakness in the Oil market is a tiny preliminary sign for the main market, but that is stretching things, even for a permabear.


Oil does look 'done' on the daily charts... 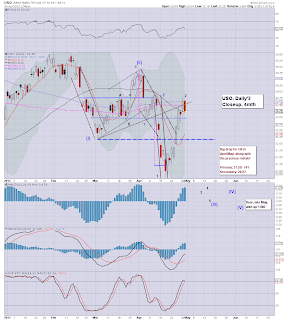 2.20pm..those bears seeking a weak close, should be desperate to see a clear VIX break, with a close >14.50.. and sp under the morning low of 1586. The latter looks especially difficult.

Posted by Trading Sunset at 18:55:00
Email ThisBlogThis!Share to TwitterShare to FacebookShare to Pinterest

Three hours left of the trading month, and frankly, its impossible to even vaguely guess whether we'll close in the sp'1600s...or in the 1580s. The only real weakness still out there is in the metals/oil market. VIX is still unable to hold the 14s. 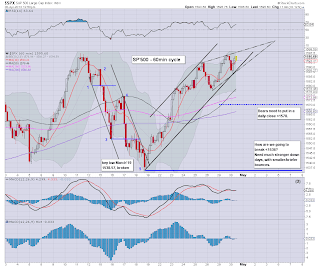 All is well in market land, but then...its probably just the POMO.

So, someone out there is buying front month VIX calls, hmm.

--
The April'11th high of 1597.35...about to get taken out.
Posted by Trading Sunset at 17:52:00
Email ThisBlogThis!Share to TwitterShare to FacebookShare to Pinterest

Market seems to have switched on invincible mode this morning. After a recessionary PMI number, the indexes are back to green, and we're breaking higher. Nasdaq is climbing to new post 2009 highs, lead by AAPL +2% in the $440s. Oil/metals remain somewhat weak. 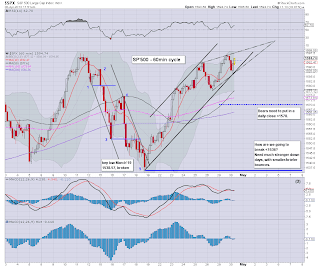 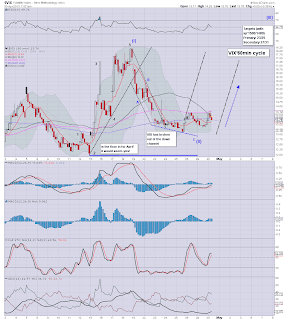 I think many are getting real tired of this.
- 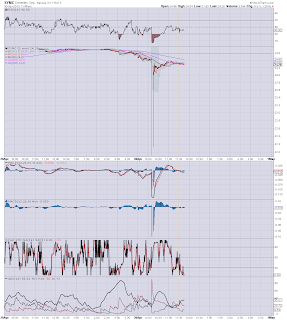 Great huh, a truck load of stops just got hit..and then..BOOM, right back up.

see ZH for further talk on 'flash crash of the day.
Posted by Trading Sunset at 16:55:00
Email ThisBlogThis!Share to TwitterShare to FacebookShare to Pinterest

After some weakness resulting from the recessionary PMI number, market is again back in the 1590s..and those bull maniacs are still in control. VIX is finding it too difficult just to hold the 14s. Precious metals and Oil both moderately weak, and look toppy on the larger time frame. 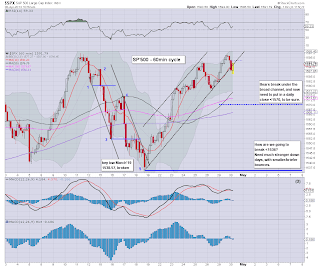 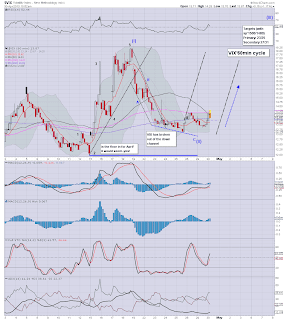 A sub'50 PMI number, and the market could yet close higher.

But then..every day is a POMO day, with those algo-bots - low volume permitting, able to melt everything upward.

It remains a very frustrating market.

What is absolutely clear, bears can't be the least bit confident until we're back in those sp'1560s, which is a good 1.5% lower..and that sure doesn't seem likely today..or even tomorrow.
Posted by Trading Sunset at 15:54:00
Email ThisBlogThis!Share to TwitterShare to FacebookShare to Pinterest

Market is still holding together rather strongly, despite a recessionary Chicago PMI number of 49 - the first sub'50 since 2009. VIX has broken into the 14s, and there is a little weakness in the oil market. Generally though, if the trading volume remains low, algo bots could still melt it back upward later in the day. 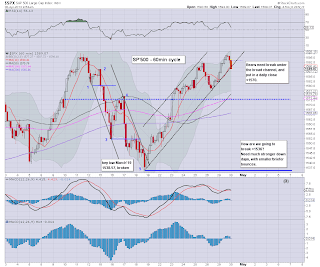 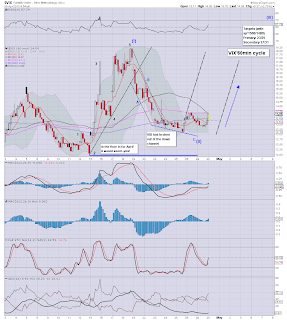 So...bears get a somewhat surprisingly recessionary key PMI number under 50.

But hey, the FOMC are meeting today, so, they are now even less likely to suggest QE will ever end..and that is clearly what the market wants to hear.

Either way, its still not looking good for those in bear land.

Need sp'1560s..to have any sign that the current wave from November is over.
--

VIX daily MACD cycle is starting to tick back up. 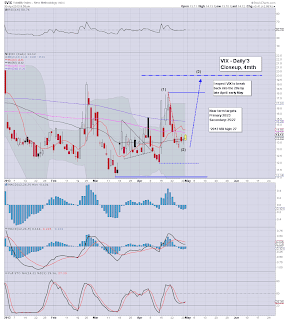 Equity bears need VIX in the 15s to really give a clear signal.

*there is no turn on the daily index charts yet, and probably another 2-3 days.
-

Its NOT conclusive yet..but the signs are out there..how we close the day..and month..will be important.
Posted by Trading Sunset at 14:57:00
Email ThisBlogThis!Share to TwitterShare to FacebookShare to Pinterest

Good morning. Futures are flat, we're set to open at sp'1593. USD is flat, precious metals are..flat...whilst Oil and Gas are moderately lower. The PMI number will be a key market mover this morning, so lets see if the bulls can manage to hit the next big level of sp'1600s. 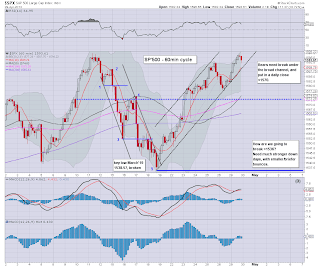 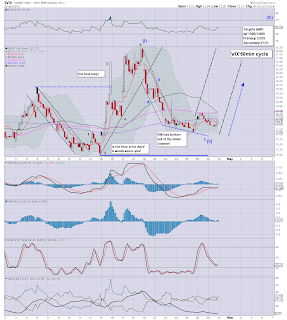 Its the last trading day of April, so there will be some 'end-month' issues today.
--

The VIX is probably all the bears have left to tout. Hourly chart suggest VIX upside viable, and daily chart is certainly looking floored in the mid 13s..but no turn yet.

Lets see how the market deals with that.
Posted by Trading Sunset at 13:30:00
Email ThisBlogThis!Share to TwitterShare to FacebookShare to Pinterest

Closing the month on a new high?

With just one trading day left of April, the US markets are set to close another month on another high. The sp' is holding monthly gains of just over 1.5%, and baring a Tuesday daily fall of 25pts, this will mark the 15th month higher out of 19 - since the current grand up wave from Oct'2011. 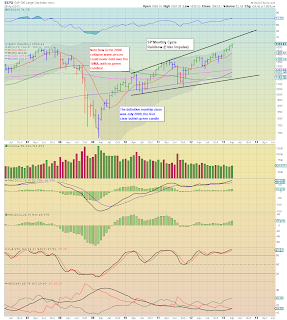 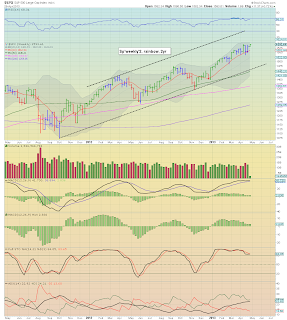 So..baring a rather substantial Tuesday decline of sp -25pts, we're set to see April close with a green candle on the rainbow chart.

Even more disturbing for the bears is that the weekly charts are now back to green, and we have the upper bollinger band offering the sp'1620s as viable 'at any time'.

If Mr Market wants to obliterate as many bears as possible it'll just keep pushing another 2-3% higher into mid May. Gods help the remaining bears if that the case, which still includes yours truly.

The big econ-data point for Tuesday is the Chicago PMI number (9.45am), market is seeking 52.4. Bears should be seeking a recessionary number of <50, although that seems rather unlikely.

Frankly, the best the bears can probably hope for Tuesday is a VIX back in the low 15s, with SP 1580s. The following H/S scenario is still arguably viable in the weeks ahead, but even the first target of sp'1485 is now a clear 100pts lower. 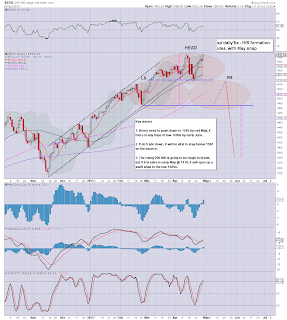 --
What is absolutely clear, the bears need to claw back into the 1560s, with VIX showing significant power in the upper teens again. Right now, that looks like an overly wistful and classic 'doomer bear' hope.

Goodnight from London
Posted by Trading Sunset at 01:00:00
Email ThisBlogThis!Share to TwitterShare to FacebookShare to Pinterest

The main indexes continued higher, on what is now day six of a rally from the sp'1536 low. The Nasdaq was the strongest index, with gains of 0.85%, most indexes had closing gains of 0.5% or so. Near term trend is clearly still to the upside, with a bizarrely low VIX in the 13s. 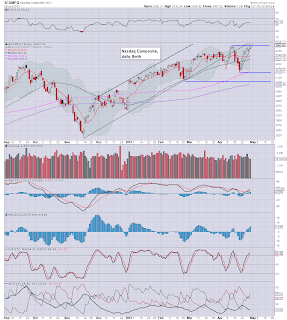 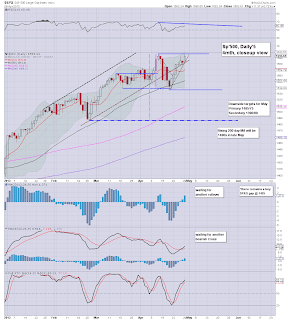 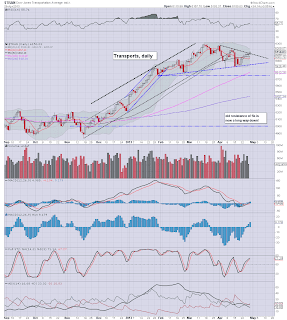 The bears utterly failed today, and it was perhaps one of the worse failures we've seen in some months.

Clearly, the bulls are still in control, and there is currently no sign of a turn/levelling phase. Indeed, it is entirely possible we'll just gap open higher Tuesday..straight into the sp'1600s.