Despite US equity indexes closing broadly higher, the VIX held up, settling +0.9% @ 21.84. Near term outlook offers renewed equity upside to the sp'1960/80 zone, and that should equate to VIX cooling to the 18/17s.. if briefly. Hyper upside to the 40s looks viable no earlier than mid March. 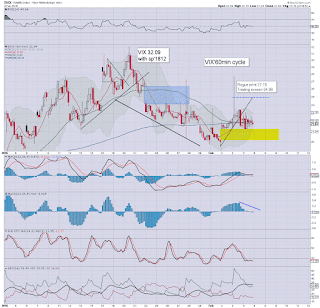 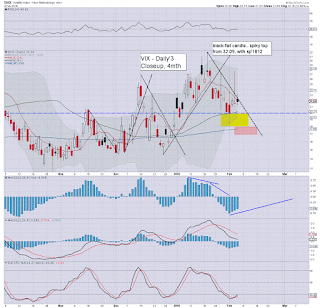 Suffice to add.. VIX managed a third consecutive day above the key 20 threshold.

However, if renewed market strength - as seems likely, then VIX is going to cool to the upper teens next week.

If the market likes the Friday monthly jobs data, the VIX could even settle the week in the 19s.
- 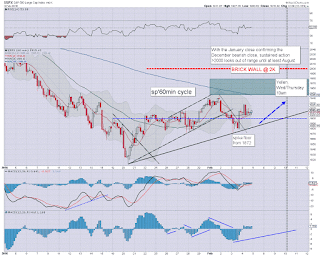 *closing hour action: micro chop.. leaning on the upside.. as no doubt some bears were covering ahead of the jobs data.
--

After a few morning swings, it was a very subdued end to the day.

The gains in the Transports I've admittedly not noticed until the close. Broadly though, price structure remains a big bear flag.
-

more later.. on the VIX
Posted by Trading Sunset at 21:00:00
Email ThisBlogThis!Share to TwitterShare to FacebookShare to Pinterest

US equities remain in chop mode, with the sp'500 set for a daily close a little above the 1900 threshold. It is notable that the hourly bollinger bands will be offering a basic trading range of 1920/1890 tomorrow morning. The 1872 low looks secure, with eventual upside to the 1960/80 zone next week. 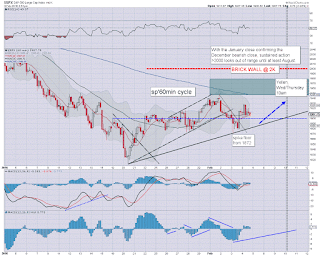 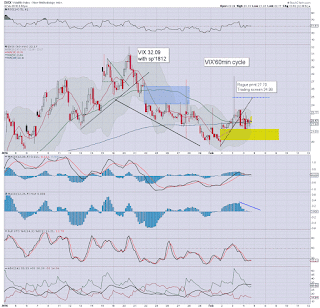 I'm in the process of taking a hatchet to my various blogs... updating links... etc.

Its pretty sad seeing just how many blogs/sites have faded across the last few years. A few have turned entirely private of course.

The average blog/site doesn't last much beyond six months....    yours truly is approaching the end of year four.
--

back at the close...
Posted by Trading Sunset at 19:52:00
Email ThisBlogThis!Share to TwitterShare to FacebookShare to Pinterest

Seen on the smaller 60/15min cycles, price structure is increasingly messy, as the market is battling to hold the sp'1900 threshold, and unable to build sustainable gains. Clearly, the rest of today will likely remain a holding pattern, ahead of the next 'best guess' from the BLS. 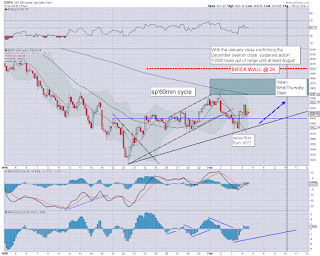 Suffice to add... hourly cycle is now on the moderately high side. Best case for the bears tomorrow are the sp'1890/85 zone.

.. the 1872 low looks very secure though. We still look headed broadly upward... as Yellen will appear next Wed/Thursday. 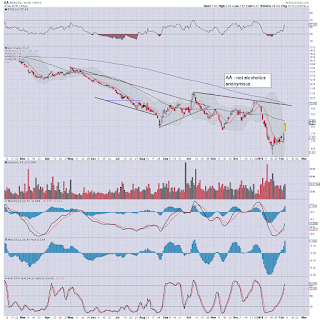 Much like FCX, RIG, SDRL.. etc... Alcoa is having a rather strong day, but broadly.. such sporadic gains are not going to sustain themselves.

It is notable that Alcoa has a market cap' of around $10bn, with debt of around $9bn. That is not great, if you consider the US/world economy is slowing.
--

US equities are increasingly choppy, as the market looks set for a weekly close above the sp'1900 threshold... along with VIX 20/19s. Indeed, once the next jobs data is out of the way, front month VIX will likely further cool under the key 20 threshold. 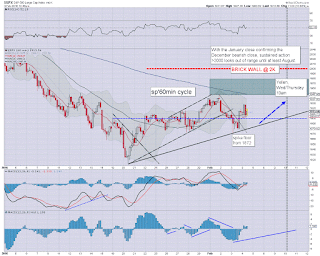 The rest of the day could be somewhat tedious, as things will quieten ahead of the Friday morning jobs data.

There is plenty of individual action though......... 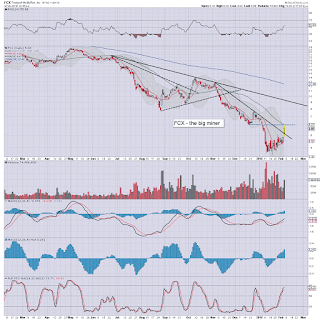 Freeport remains on the 'disappear list'. Today's hyper short-covering ramp has naturally got stuck at an old floor.. where the 50dma is also lurking.

In either case... commodities remain broadly weak, and if the USD resumes higher as seems inevitable, the miners are in serious trouble.
--

US equities are seeing renewed weakness having cooled from a morning high of sp'1927, as the market is set to churn ahead of the monthly jobs data. USD remains broadly weak, -0.6% in the DXY 96.60s. That is clearly helping the metals, Gold +$11. Oil remains very unstable, -0.8%. 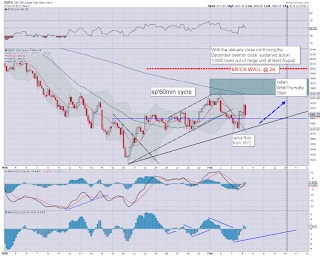 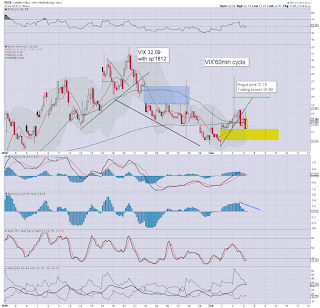 I realise some are getting twitchy to launch a market re-short, but the big daily/weekly cycles are still offering a break above the Monday high of sp'1947.

It won't take much to hit the 1950/60s next week..as Yellen will probably try to placate the market with talk that the economy is still growing, and that the Fed has everything under control.

Maybe she'll even issue a threats of 'renewed easing if conditions merit'.  Yeah... that'd give the market an excuse for a brief spike upward.

--
time for lunch
Posted by Trading Sunset at 16:50:00
Email ThisBlogThis!Share to TwitterShare to FacebookShare to Pinterest

11am update - swinging to the upside

US equities have naturally swung back to the upside, and it is notable that the sp'1900 threshold remains a rather key level. Further price chop looks due this afternoon, before the market has to cope with the next monthly jobs data tomorrow. Right now, the 1970s look well within range next week. 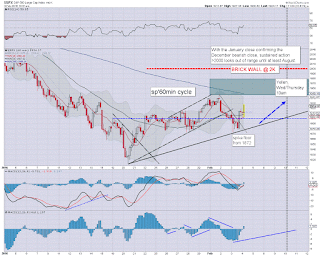 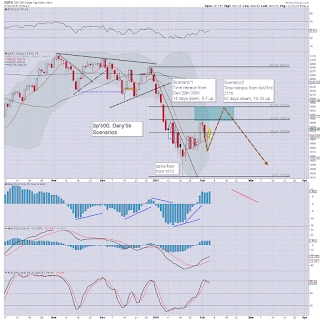 re: daily5b. Clearly, scenario'1 is OFF, and as I expected, we're seeing renewed strength.

There are going to be plenty of aspects of resistance next week from the 1950s on up, not least the daily upper bollinger... and the even more important 50dma. 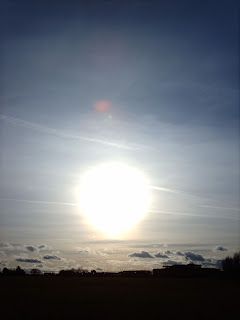 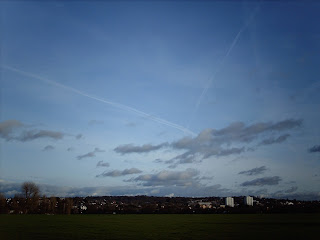 Another day closer to summer warmth.
--

time to cook
Posted by Trading Sunset at 15:53:00
Email ThisBlogThis!Share to TwitterShare to FacebookShare to Pinterest 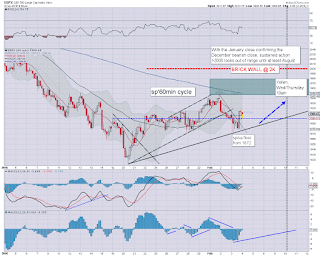 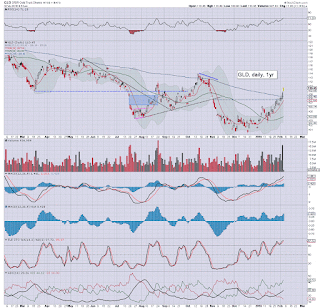 *note the hourly MACD (blue bar histogram) equity cycle, we're set to get a bullish cross in the 10am hour.
--

Yesterday's closing daily candle was pretty clear, a spike floor, and this mornings opening weakness is just a tease to the bears.

The dividend cut for Conoco is to be expected, but that still doesn't merit as industry capitulation. Companies are going to need to... disappear.

--
*Interesting coverage on drug pricing on clown finance TV.. with Shkreli of Turing, set to speak.


--
stay tuned
Posted by Trading Sunset at 14:52:00
Email ThisBlogThis!Share to TwitterShare to FacebookShare to Pinterest 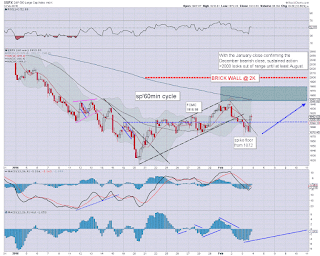 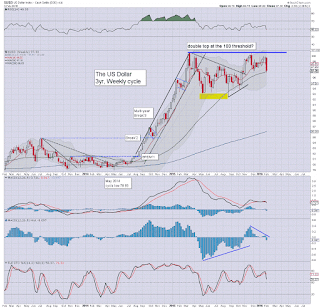 Yesterday sure saw a powerful reversal... and action <1872 looks unlikely for at least a few weeks.

Today will likely see a lot of chop.. as the market enters a holding pattern ahead of the next jobs data.

Even if I knew the number, what will really matter is how the market interprets the data. A good jobs number will again bring up the threat of a rate hike later this year - something many clearly do not want.

Yet.. a bad jobs number <100k, would merely warn there is serious threat of a US recession.

Would bad news be seen as such?
--

Still no fan of the ratings agencies

It was just another crazy day in the US equity market, with early morning weakness to sp'1872, but then a hyper rebound back above the 1900 threshold. Further upside to the 1960/80 zone will not alter the mid term outlook, with much lower levels due this March/April. 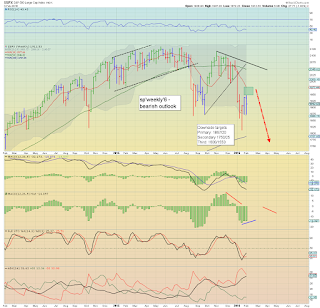 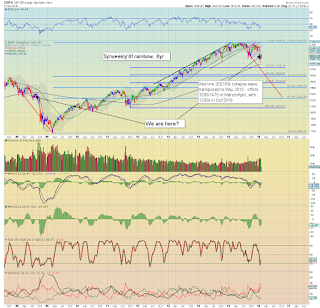 With net daily gains, the weekly candle has flipped from red to blue. Another 2-3 blue candles seem highly probable, before the next opportunity of a major rollover.

re: weekly8f: it remains a highly speculative chart, but the pattern IS there. Doomer bears will need to see the sp'1812 low taken out no later than April to have any hope of the 1600/1500s.

Watching clown finance TV this lunch time, the discussion was once again about the energy stocks. In this case, the story was that the S&P ratings agency had down graded ten of the oil/gas stocks. 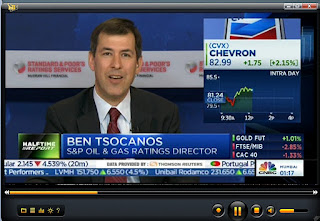 The shameful (but not surprising) 'ratings for money' situation was a small, but notable part of the financial madness across 2005-07.

Has anything changed? I'd argue no. To me, the very notion of 'ratings' from some government/mainstream endorsed agency is still inherently nonsensical.

Frankly, most of the reports/ratings issued by S&P and their competitor (or should that be duopoly partner?) Moodys, are garbage.

Very little has been learnt by the ratings agencies since the 2008/09 collapse wave. Government bonds from some of the most financially corrupt/incompetent nations on Earth are still graded AAA.

I suppose such twisted research merely makes for more financial comedy though.
--

I still don't see a multi-year low in Gold, not least as there is yet to be capitulation within the precious metals mining sector.
---

Thursday will see the weekly jobs, prod/costs, and factory orders.

*there are no less than 3 fed officials on the loose, although Mester is not due until AH
-- 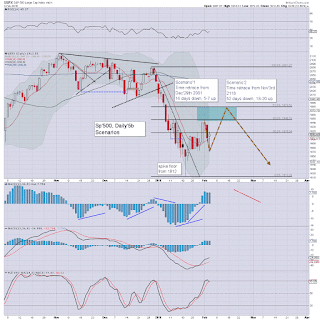 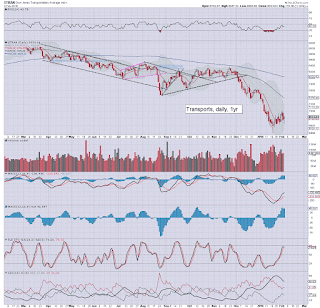 The daily candle is offering a rather clear spike floor, with probable upside next week.. to the 1970s.