Whilst equities closed moderately mixed, the VIX was battling across the day to hold minor gains, settling +1.9% @ 14.91 (intra high 15.46). Near term outlook offers an equity snap under soft rising support, with first target of the VIX 18/20 zone next week. 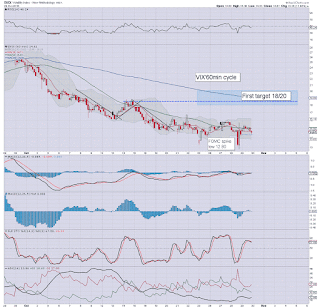 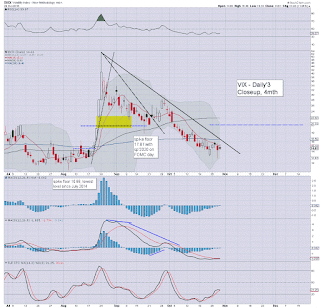 VIX remains broadly subdued, and it is clearly going to take an sp -30pt day to give the VIX the first opportunity to make an attempt to clear the key 20 threshold.

--
more later... on the indexes
Posted by Trading Sunset at 22:00:00
Email ThisBlogThis!Share to TwitterShare to FacebookShare to Pinterest 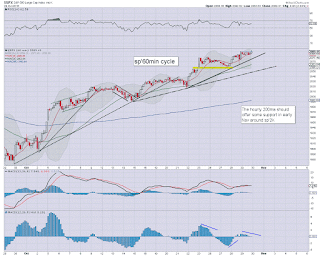 A surprisingly subdued day after the FOMC swings, with the sp'500 trading within a tight range of just 9pts.

Frankly, I wish it was Friday afternoon.. but then... I try not to wish my life away.

--
more later.. on the VIX
Posted by Trading Sunset at 20:02:00
Email ThisBlogThis!Share to TwitterShare to FacebookShare to Pinterest

US equities remain in a rather bizarrely tight trading range of a mere 7.2pts. Price structure is arguably still one of a topping formation..  snap level at the Friday open will be sp'2075. VIX is holding minor gains of 2.6% in the 14.70s. 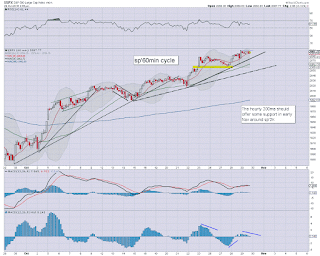 Tomorrow can only be more dynamic.. yes? 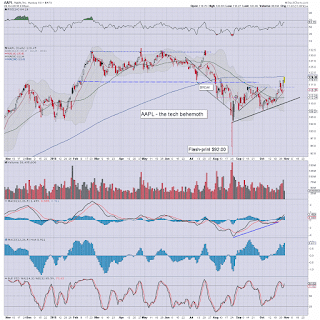 AAPL is managing to continue climbing after good earnings.... but it looks way over stretched.. and will be vulnerable as the broader market rolls over into next week.
--

back at the close.
Posted by Trading Sunset at 18:55:00
Email ThisBlogThis!Share to TwitterShare to FacebookShare to Pinterest

Whilst US equities remain moderately weak (awaiting a snap <sp'2075)... there is notable weakness in the precious metals. Gold -$10, with Silver -2.6%, having seen a powerful reversal yesterday at the 200dma. Outlook is bearish.. and if correct, that sure doesn't bode well for the related mining stocks. 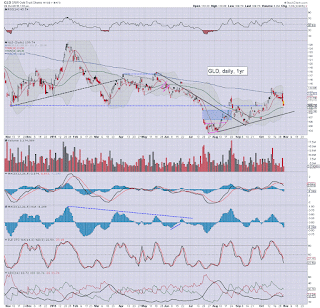 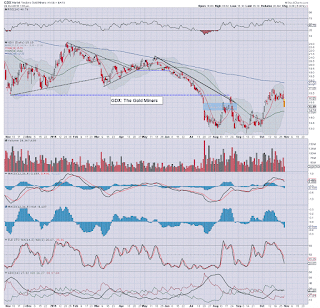 Broadler price structure on the weekly charts is a giant bear flag.. and is highly suggestive of new multi-year lows.

Gold looks set for the $1000 threshold.. and frankly.. if interest rates are raised at the Dec' FOMC, the gold bugs are going to end the year being utterly destroyed.
-

*there will come a grand turning point in the metals/miners.. and I'll sure as hell be the first to tout it.. but for now... it remains a waiting game.
-

back at 3pm
Posted by Trading Sunset at 17:54:00
Email ThisBlogThis!Share to TwitterShare to FacebookShare to Pinterest

US equities remain a touch weak, as some of the bull maniacs still believe we'll see further highs before a retrace begins. Price action is extremely tight, with the snap level currently at soft rising support @ sp'2075. VIX remains holding gains of almost 5%.. around 15. The 16s look due. 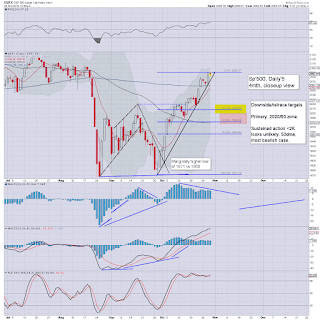 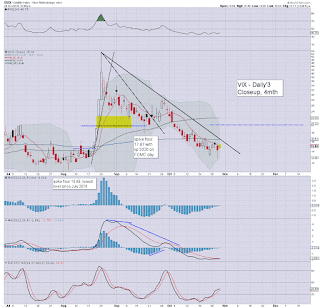 Market looks tired, and with the FOMC and key GDP data out of the way.... we're set to see a break lower.

Its just a case of when the first snap occurs.
-

*metals are increasingly weak, Gold -$8, with Silver -2.6%.. but more on those... in the next hour.
Posted by Trading Sunset at 16:57:00
Email ThisBlogThis!Share to TwitterShare to FacebookShare to Pinterest

12pm update - leaning on the weak side 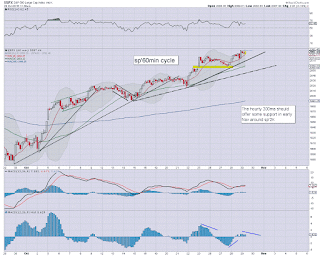 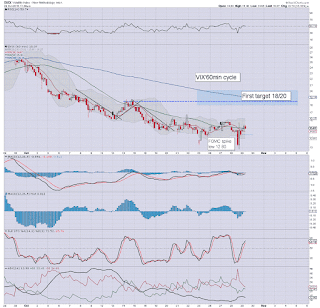 The market sure is trying to hold together, but the underlying pressure is increasingly bearish.. as reflected in a VIX which is creeping upward.

miners, GDX -2.8%.. as the metals are unable to bounce from yesterdays powerful reversal (at the 200dma)

TWTR -4.5%.. momo chasers are likely in trouble in that one.


--
time for lunch
Posted by Trading Sunset at 15:50:00
Email ThisBlogThis!Share to TwitterShare to FacebookShare to Pinterest

US equities remain only a little lower, but price momentum is in the process of turning toward the bears. Net daily declines look due. Equity bears should be seeking a break of soft rising support.. with a daily close <sp'2075.. along with VIX 16s. 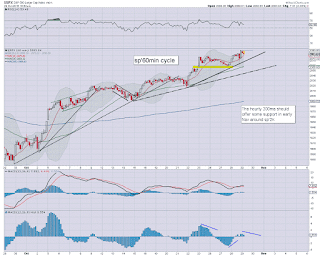 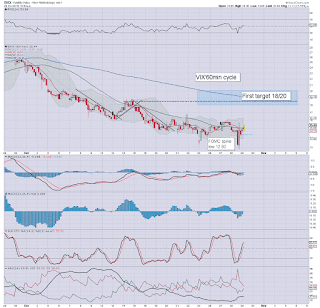 Suffice to add... the market has seen a few vain attempts to break back upward.. but is failing.

It would appear just a matter of when we get the first sig' net daily decline... although unlikely today...

Eyes on the VIX...  which does have a VERY clear fed day spike-floor of 12.80. We ain't likely going that low again until December.
- 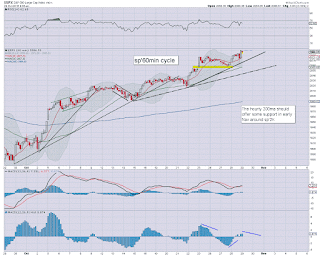 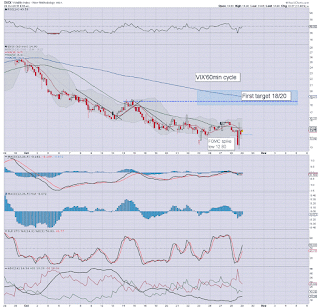 Long day ahead... and broadly.... it should result in net daily declines.

As many in the mainstream are starting to finally realise though, equity indexes are set for rather extreme net monthly gains.

Even if we slip a full 2% between now and the weekly close, the equity bulls will manage a rather hyper-bullish close above the monthly 10MA.
-

Indexes weakening...  with VIX +4% in the 15s.
Posted by Trading Sunset at 13:54:00
Email ThisBlogThis!Share to TwitterShare to FacebookShare to Pinterest 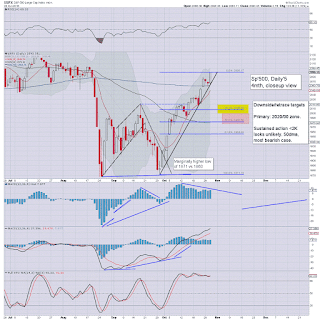 Probably... I shall dare say.

A retrace to around 2000/1980 seems highly probable. Sustained action in the 1900s looks difficult.

sp' remains -8pts @ 2082
Posted by Trading Sunset at 12:12:00
Email ThisBlogThis!Share to TwitterShare to FacebookShare to Pinterest

With the FOMC announcement containing another threat of an interest rate hike at the December FOMC, the situation is somewhat like late July. First downside target is the sp'2K threshold, and that will no doubt spook a few of the weaker equity bull maniacs. 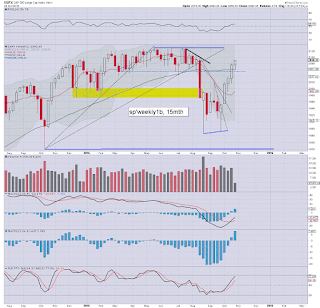 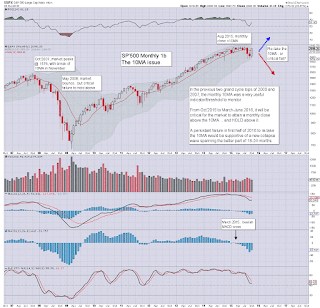 It won't take much to attain a net weekly decline.. and that would be my guess right now.
-

Central to the day.. Q3 GDP data (due 8.30am). Market is expecting 1.7% growth..which is a pretty conservative target. Anything much <1.5% would be a viable excuse for equity weakness.
--

A few words were added to the latest Fed statement.. a few words were taken away. The cheerleaders on clown finance TV were of course obsessing over such things.

To me.. it is all utterly farcical...  but more so... sickening. Savers remain destroyed with such artificially low rates, and there remain ever worse distortions across much of the world capital markets.

Even if rates were to somehow reach 2-3% by 2017, it won't negate much of the damage that has been already been done. 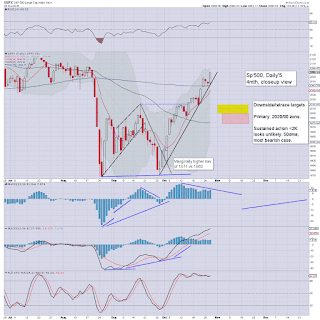 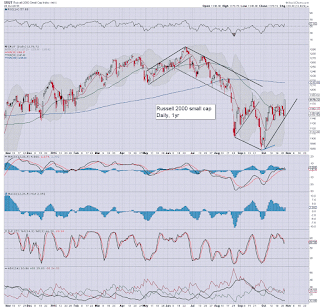 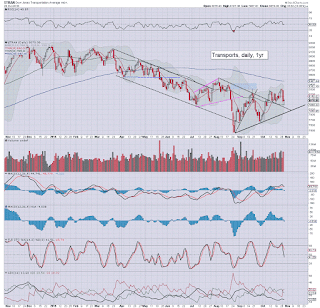 Suffice to add, there were new cycle highs in a number of indexes as the market continues to battle upward from the marginally higher low of sp'1871.. now 219pts lower!

Near term outlook is bearish.. as a retrace is due, the sp'2K threshold remains a rather natural target into mid November.