VIX - climbing into the weekend

A real warning is still being issued from the VIX, which closed in the 25s. 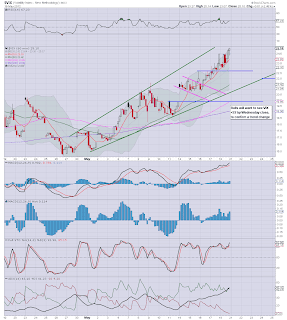 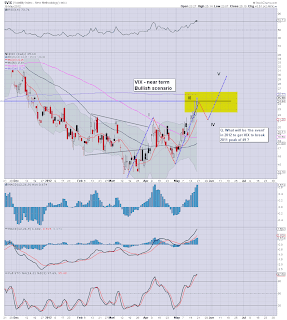 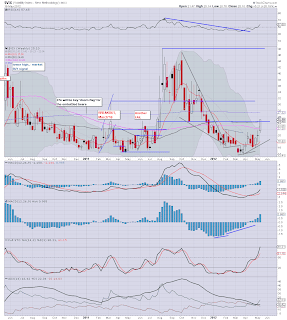 The next main level is the 200 MA on the weekly cycle around 27, and then the 31 quake low/spike from March 2011. There is nothing 'bullish market' about this!

The VIX weekly chart is offering potential for a break over 49..in the June/July period.
Posted by Trading Sunset at 22:30:00
Email ThisBlogThis!Share to TwitterShare to FacebookShare to Pinterest

Its been a long week, just a quick closing update on those hourly cycle charts... 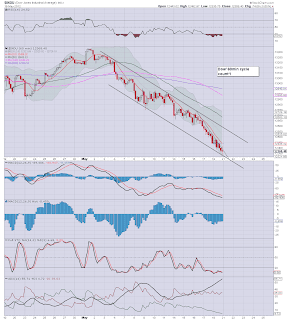 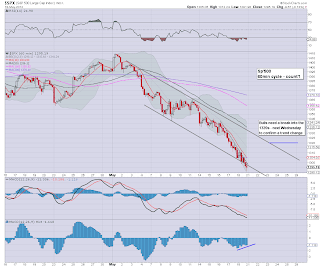 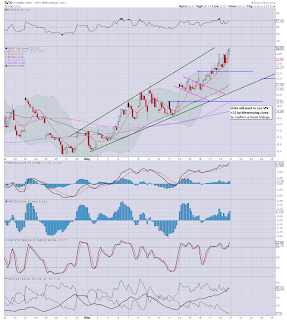 Yet another very weak close for the market. The added bonus for those still short, we close the week with the VIX closing strong in the 25s.

More across the evening
Posted by Trading Sunset at 21:04:00
Email ThisBlogThis!Share to TwitterShare to FacebookShare to Pinterest

With the FB hysteria fading away, the market returns back to normal service...day'13 of this down cycle..and we're slipping into the close. VIX is breaking new highs, the next soft level is 27..then 31. 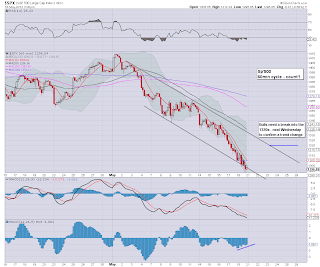 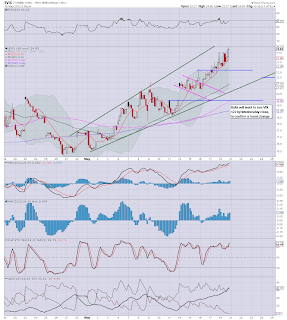 No sign of a turn, in fact..could even get worse. If we close today below the down channel on most of the indexes...do we collapse Monday? The VIX is suggestive of further problems into next week.
Posted by Trading Sunset at 20:01:00
Email ThisBlogThis!Share to TwitterShare to FacebookShare to Pinterest

Considering the endless weak closes, we are surely due one where we actually rally (even if only a little) into the close. So far today though, there is no sign of that. Again, this market is just so weak. 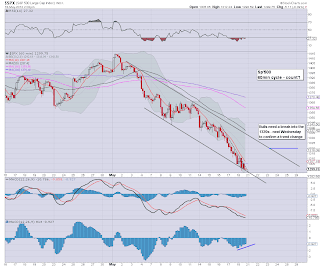 So, by the end of next Wednesday, bulls will 'only' need to see 1320s to confirm a break higher. Even then, it could take some days to secure the floor before breaking higher. The first natural target on any break higher would be 1340 - the old support level from early March. A move over that, and we would advance into the 1350/60s.

More later...despite it being so quiet.
Posted by Trading Sunset at 19:03:00
Email ThisBlogThis!Share to TwitterShare to FacebookShare to Pinterest

1pm update - levelling out into the weekend

Market still seems in the process of trying to level out. We remain in the huge down channel, and this is day'13. In many ways, bulls would prefer at least a marginally green close to show some sign of a cycle low. 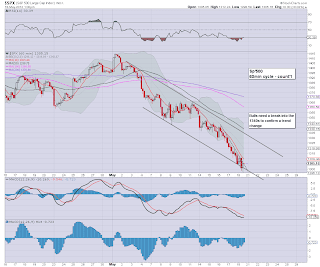 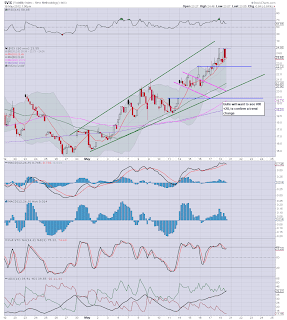 Probably a quiet afternoon to come. The Facebook hysteria is dying down, so next week we'll be back to normal at least.

*VIX is holding under yesterdays peak of 24.50, something to keep an eye on.

For the bulls...a close over the hourly 10MA, now @ 1309 would be 'useful', but is small solace after a pretty rough week.
Posted by Trading Sunset at 18:01:00
Email ThisBlogThis!Share to TwitterShare to FacebookShare to Pinterest

There will clearly be many bemused at the apparent lack of a hyper gain for FB at the open. I'm surprised myself, especially after hearing reports of $70s in the European markets.

Main market is weak again. This market need a major EU announcement to give the excuse for a kick out of the down channel. 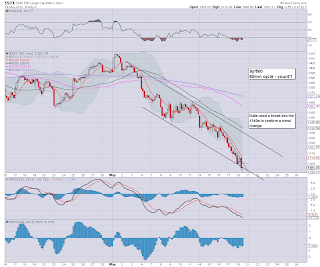 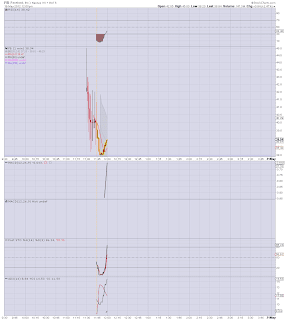 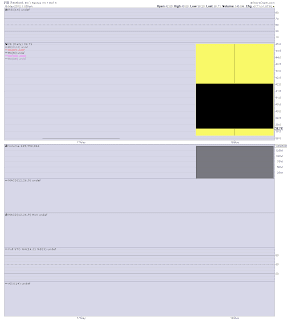 The giant black doom/fail candle on FB that I expected... and is pretty funny to see.

More later, time for lunch
Posted by Trading Sunset at 17:02:00
Email ThisBlogThis!Share to TwitterShare to FacebookShare to Pinterest

Will the hysteria of FB...turn into retail trader horror? Just a brief update this hour, but a reminder also on the VIX. 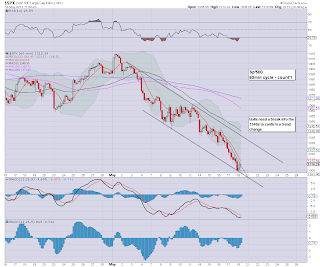 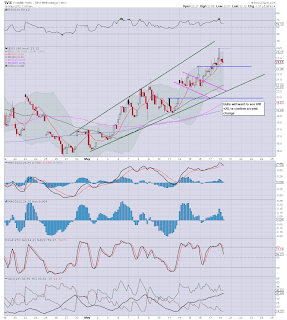 Looks like the market is breaking out of the descending wedge (grey dashed line), but there is a long way until we're out of the down channel. SP'1335 top of the channel by end today....I'd like to see 1340s to really confirm it next week.

More across the day
Posted by Trading Sunset at 16:02:00
Email ThisBlogThis!Share to TwitterShare to FacebookShare to Pinterest

10am update - awaiting the hysteria to be listed

I knew it was coming, but even I'm surprised at just how insane the blanket coverage about the Facebook IPO is this morning on the various clown channels. If ever there was a case of public hysteria, then this morning is the finest example for the financial historians in the distant future to reference. Almost an entire financial community sucked into a delusion that something is worth 100x its earnings.

I will however give the Cramer (CNBC) some credit today. He at least makes the point that the usual non-trading person should 'use limit orders, NOT market'. Yet, its clear, many retail 'investors' will be buying at the open with no limit..and will likely get burnt. I find it hard to even use the term 'invest' when it comes to FB, the only real 'investors' were those buying it privately in 2008/9 at the equivalent of $3. Those were the only true investors in FB. 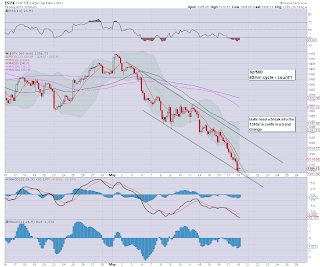 As noted earlier, bulls should look for a close over the hourly 10MA, but it will probably not be until the middle of next week that we might be seeing a close above and outside of the current down channel.

I will certainly keep an eye on the Facebook pricing today, I think I'll post some intra-day charts on it through today. Remember, I'm looking for a giant black doom-candle! Any 'normal' person would steer clear of this nonsense today, and merely spectate from the safe sidelines.

More across the day.
Posted by Trading Sunset at 15:01:00
Email ThisBlogThis!Share to TwitterShare to FacebookShare to Pinterest

Good morning. I am mostly sedated - via large quantities of chocolate, after yesterdays further market drop. A 12 day down cycle, and that's without ANY panic, or any real 'scary news' event.

I was looking at the 60min cycle. For the sp', a close for the bulls above the 10MA is the obvious target - which will be around sp'1315 at the close of today. So, that would be around sp'10/12 points higher. That's certainly feasible today. 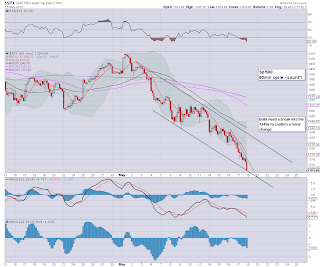 That is one hell of a strong and long down channel for the hourly cycle. We've not seen anything like this since last July/August collapse wave'2011.

I think it can be said that only a break and close above the upper channel - currently 1340 would confirm a trend change. Although, by the close of next Tuesday this level will be down to 1320.

There are many issues about 'what happens when we do start going up again', but I've cover that over the weekend. I've scrubbed all my 60min charts, so no more numbers or giant arrows. For the moment, lets keep it simple until we exit this down channel. Ohh, and lets not forget, its opex, so expect some choppy action across the day.

*re: Facebook. It goes live on the exchange at 11am I believe.

I'm certainly not..and never will meddle in such hysteria lead IPOs. If there is one thing to look for in today's trading, look for a GIANT black candle on both the hourly and daily chart. Maybe it'll look something like this.... 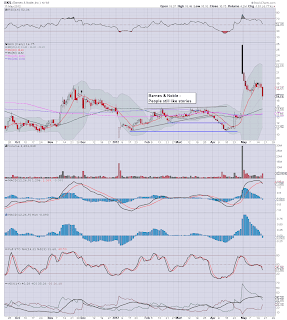 Look at the action on Monday April'30'th. Almost a 100% gain (pre-market) - on news of a deal with MSFT. Well, those gains sure never held, and its been falling like a lead clad brick since.

Can Facebook close red today? I certainly believe so, which would of course be pretty funny to see. Yep, the most entertaining thing of the year so far...FB opens up 50/70%...and yet closes red...5/10%. That would be my 'best guess' for today. Lets be clear, it'll be a 100 PE stock, that's INSANE. Even PE'30 would be a stretch, and for a internet stock, I just can't stand the fundamentals of it.

There is no loyalty in net-land, there is no reason why FB won't go the way of MySpace. Remember this day, traders! The day when the entire western markets were once again caught up in 24/7 blanket coverage of an internet IPO, whose annual earnings were 1 billion...and yet they valued it at 100 billion. Yeah, I think many know where this nonsense is eventually headed.

Good wishes for Facebook-Friday ;)
Posted by Trading Sunset at 13:00:00
Email ThisBlogThis!Share to TwitterShare to FacebookShare to Pinterest 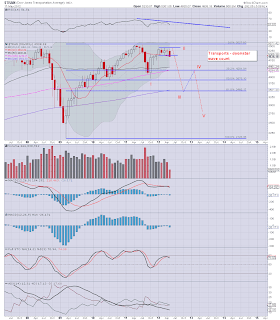 Goodnight from London city.
Posted by Trading Sunset at 03:00:00
Email ThisBlogThis!Share to TwitterShare to FacebookShare to Pinterest

A really bad end to the day for the bulls. For those holding short...congrats, you've probably more gains to come. The VIX is starting to confirm the market is getting a little edgy with a close in the mid 24s. Currently, there is no end in sight to this 12 day down cycle. 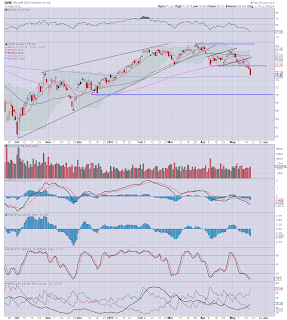 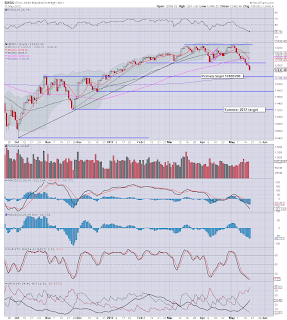 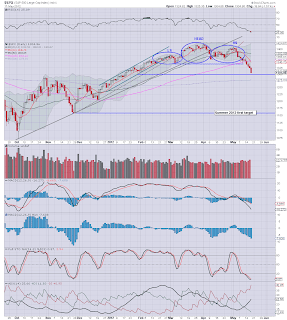 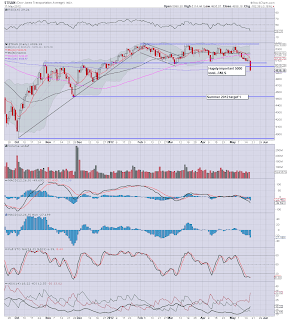 All indexes are now moving into freefall/empty air territory. There are certainly endless levels of support, but the weekly and monthly targets are all suggesting significantly lower levels (equivilent to sp'1150/00 by end July) and this could feasibly be achieved in this wave if the market starts to panic.

Its clear, there are no buyers at these levels, and the selling hasn't even started yet. Either some 'surprise' annoucement comes from the EU regarding bank protection..or this wave lower will surely continue.

Most important of all today, the Transports index broke and closed under the hugely important 5000 level. The monthly charts are arguably now issuing a huge confirmation warning for the rest of summer 2012.
Posted by Trading Sunset at 00:00:00
Email ThisBlogThis!Share to TwitterShare to FacebookShare to Pinterest
Newer Posts Older Posts Home
Subscribe to: Posts (Atom)