Okay, lets take a look at those weekly cycles on the indexes. 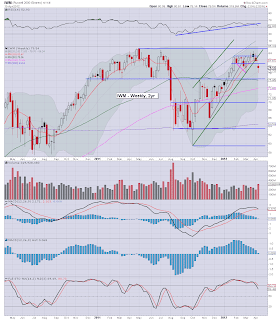 We have a clear break of the October channel. Next key level would be 76
The MACD (blue bar histogram) cycle will go negative cycle at the open on Monday morning, triggering a serious sell signal to those algo-bots. 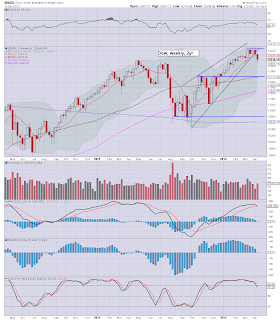 The Dow is looking very negative, and will probably go negative cycle either later this coming week, or week after. Next primary support is around 12400/200, a good 450/650pts lower. 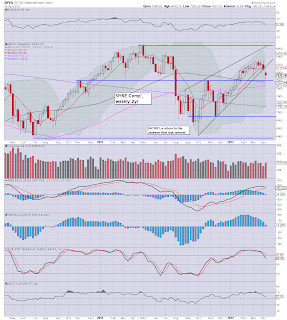 The NYSE comp' will probably go negative cycle at the open on Monday, we have a clear rollover in progress, and last weeks candle was a very serious break lower from the October up trend. The next support level is 7800. 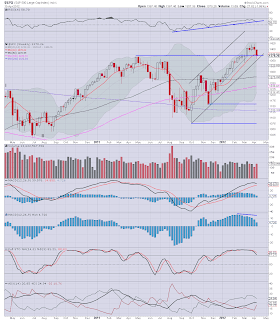 Sp' is surprisingly still within its October channel, only a move under 1350 this coming week will conclusively break the 7 month rally. MACD cycle is still around a week from going negative cycle. 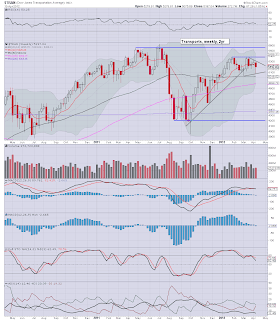 Transports remain the weakest index I follow. Trans' has never exceeded the May'2011 high, and we've been essentially flat lining since the start of the year. I suppose its possible we are forming a bullish pennant, but the Trans looks especially weak, with near term downside in the 5100/5000 level.

*interestingly, Transport is already officially negative cycle on the MACD, with a clear rollover on the Full stochastic indicator. 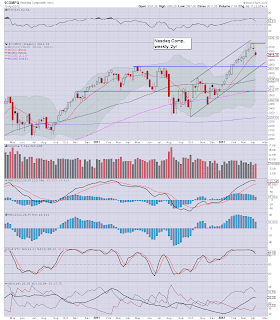 Tech' has without question been the strongest sector for a very long time, and despite this past week, we are not even close to breaking the October upward channel. Next downside level would be around 2950/2900 - which would equate to sp'1340 or so. Tech' sector is at least 2 weeks away from going negative cycle.

From a weekly cycle point of view, this is a pretty bearish near term outlook. There is a very clear 3% lower available on all indexes, which would take the SP' from 1370 to around 1340 this coming week. At that point, there would be high likelihood of a bounce.

*This Monday morning, some of the weekly cycles will officially go negative cycle, and that will doubtless trigger sell signals. The Bears have a real opportunity to gap the market lower at the Monday open, and keep trending down - first target would be sp'1340.

That last hour of Friday trading really messed up the chances for the Bulls. If indeed the two day bounce was a minor'2 up-wave, then we are now in a minor'3 down-wave - which would take us to at least sp'1340 within the next trading day or two.

--
I will look at the monthly cycles this Sunday.
Goodnight
Posted by Trading Sunset at 23:30:00
Email ThisBlogThis!Share to TwitterShare to FacebookShare to Pinterest

Well its the weekend, lets look at something I've not covered in quite a while.

The SPY/VIX ratio, via a 'Zig-Zag, new methodology' style chart. It makes use of the Elder Impulse candle type - red, green, or blue. We have 3 charts to take a look at... 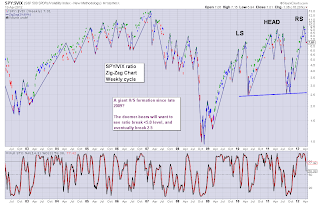 The grand overview certainly puts things into perspective. Interestingly, you can see the clear 2007 peak (this chart peaked a few months before prices peaked)..a brief fake-out spike in May 2008, and then the collapse wave during the Lehman implosion.

The key aspect is that we do appear to have a reasonable H/S formation right now. Yes, its lopsided, with the RS higher than the Head, but that can be acceptable to some extent - we've been in a very general up trend after all. 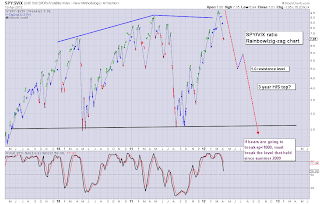 On a 3 year chart, the H/S formation does look not so good. However, if the ratio moves down to the 5.0 level in the coming weeks, then it'd probably be confirming the H/S formation. A move down to 2.5 at some point this year would then seem very probable. 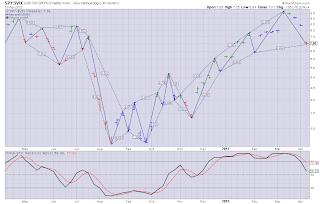 We have our first red candle this past week, the first since last Novembers pullback. Note the Full Sto' indicator, the bears will need to see it break <50 this coming week, and then punch fast down to under 20. If that is the case, then there is the real possibility of Sp'1150 in the coming months.


Special note
I'm not entirely comfortable with these charts, after all, they are ratio charts and such charts certainly do not always reflect changes in price or even the correct direction in trend at any given time.

However, I think they are worth bringing up again, and are something to provoke a few thoughts, and thats always a good thing I believe.

--
More later this weekend, especially focusing on the weekly/monthly index charts..
Posted by Trading Sunset at 18:03:00
Email ThisBlogThis!Share to TwitterShare to FacebookShare to Pinterest

A nightmarish chart to scare the bulls

As noted earlier, it was another rough day for the European markets.

To conclude tonight, and lead into the weekend...stare at the following picture of horror for a few minutes, and then ask yourself...'where is Europe probably headed next week?' 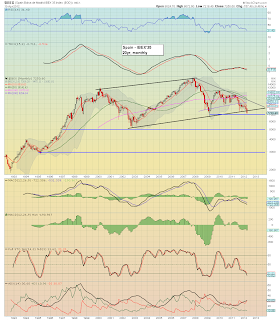 All things considered right now...Monday could be real ugly.  Both Spain and Italy are in the process of seeing their equity markets collapse.

If the Bernanke, or the ECB are going to pull any weekend tricks, they better do something..and it had better be significant.