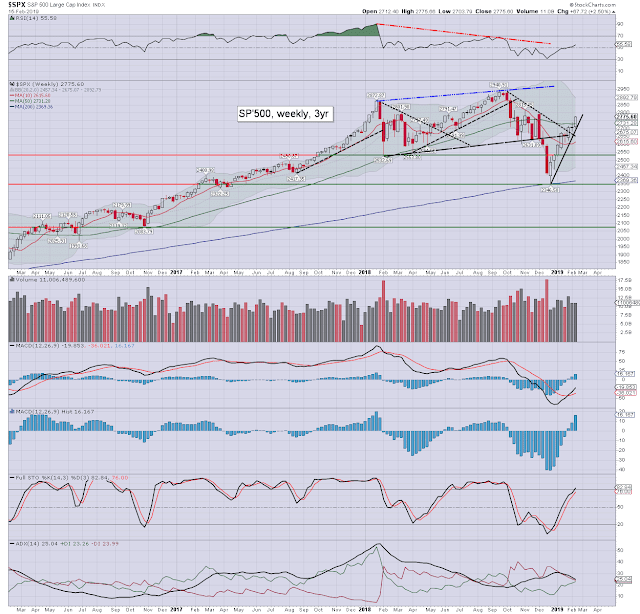 The SPX climbed for a third consecutive week, the 7th week of 8, settling +67pts (2.5%) to 2775. MACD (blue bar histogram) cycle continues to tick higher, as weekly price momentum increasingly favours the bulls. Note the upper weekly bollinger at 2892, and which is falling by around 45/50pts a week. From Feb'25th onward, it will offer prime resistance around 2800. The SPX has climbed 429pts (18.3%) since the late December low of 2346. 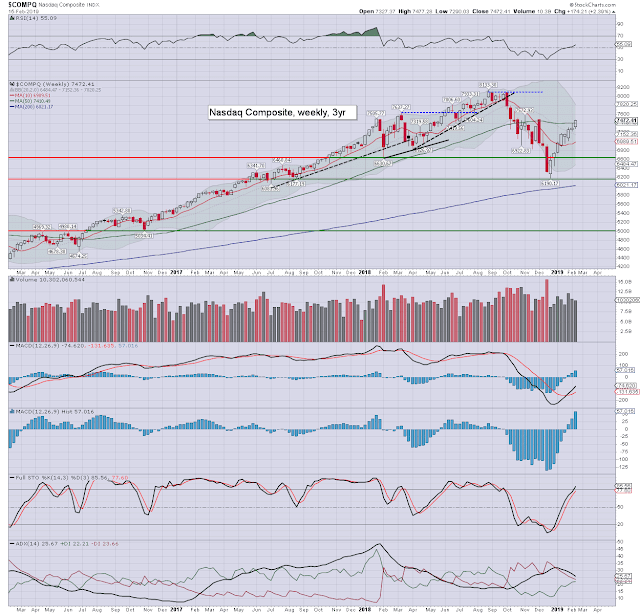 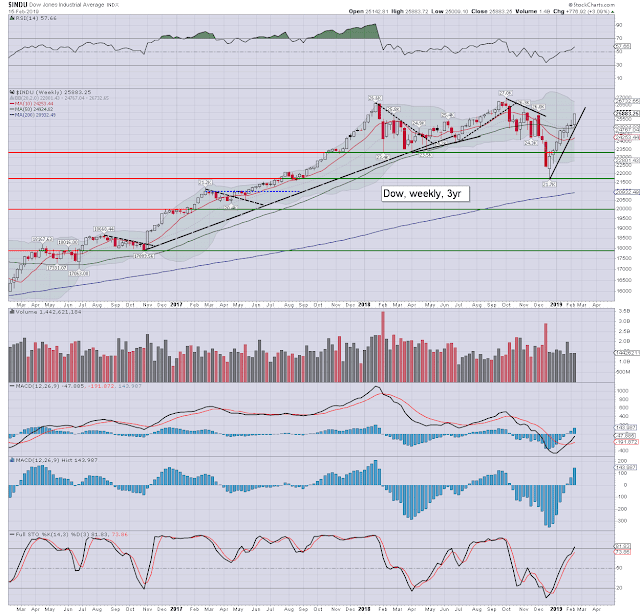 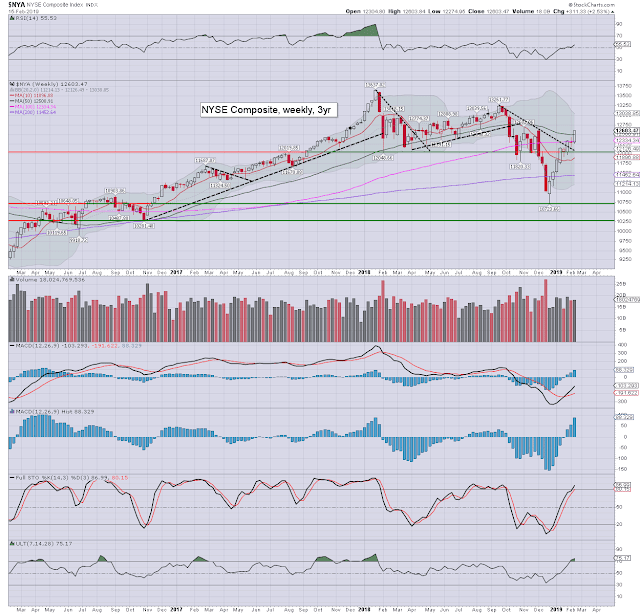 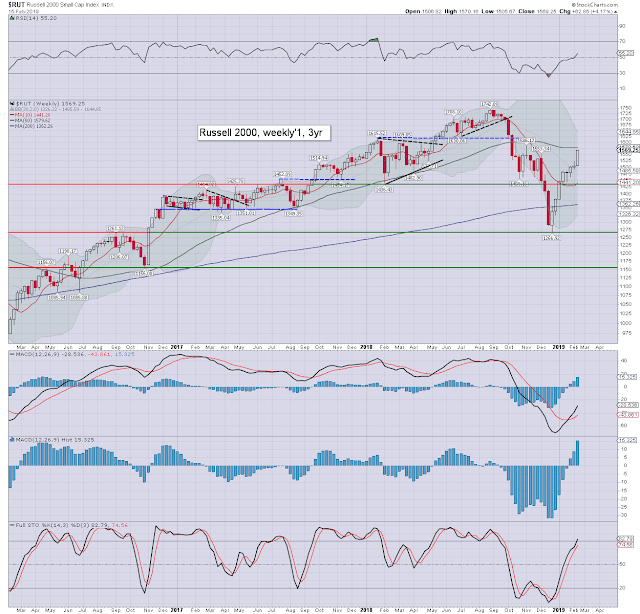 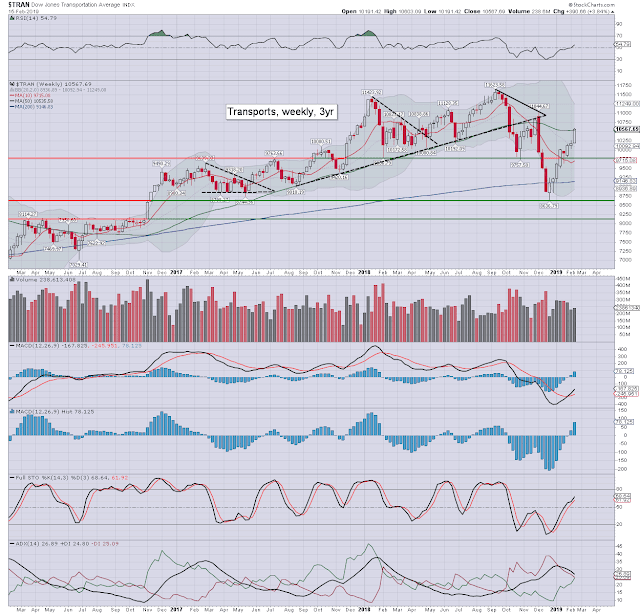 The R2K and Trans lead the way higher, whilst the NYSE comp' and Nasdaq comp' lagged.

It will be a short four day trading week, with a light sprinkling of earnings... 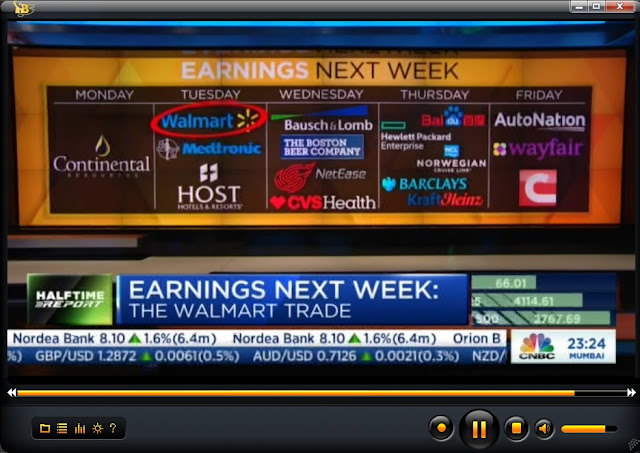 F - German Q4 GDP (second print) Flash print 0.0%. Its very possible (if not probable) the refined number will be negative for a second consecutive quarter, and deem the economic powerhouse of the EU, as officially in recession.
--

US equities have seen a monstrously powerful ramp from the late Dec' low. Its partly cyclical of course, along with the mainstream having been 'inspired' by threats from Print Central to cut/adjust QT. We are seeing increasing chatter from the cheerleaders, that the next rate change will be a cut.

It remains the case that the ultimate equity sell signal will (ironically) be a rate cut. Clearly, a cut/suspension of QT would be a pre-cursor. Whilst the global econ-data and corp' earnings are increasingly weak, until we see such a rate cut, there is still threat of new historic highs. Even a sig' retrace of 5-7% into the next FOMC of March 20th won't negate that. 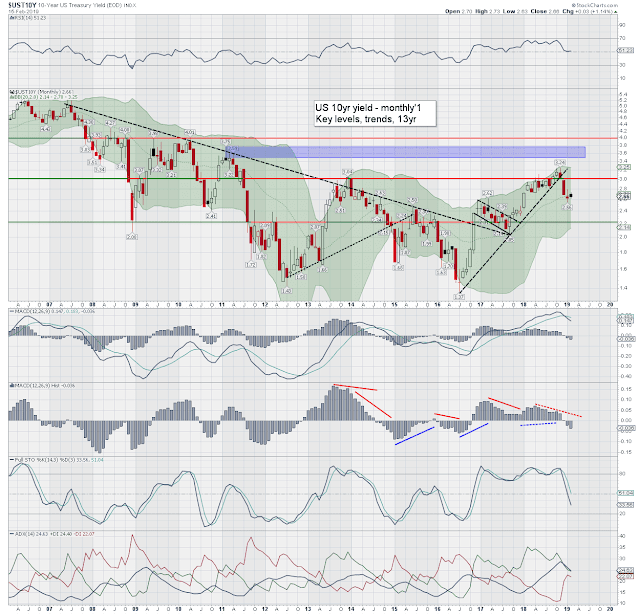 Whilst equities are back to 'everything is fine again' mode, the bond market sure doesn't reflect that, with the US 10yr yield at 2.66%. Natural/prime target of 2.25% remains on track. If yields do continue to broadly cool into/across the spring, equities should see some degree of retrace.

Ohh, and a yield curve inversion of the 10s/2s is still on the menu...

The US 10yr/2yr spread stands at just 14bps. It won't take much to generate an inversion, and it will be fascinating to see how the mainstream react to such a signal.
--

A few stray closing thoughts... what will the financial markets and global economy be like then? Interest rates? WTIC/commodity prices? Will most of the central banks have been taken over by govt'?  The USD, will it still be king of FIAT land? Will Tesla have a charging station on the moon?
--

Enjoy the three day break
--
*the next post on this page will (probably) appear 5pm EST on Tues' Feb'19th.
Posted by Trading Sunset at 17:00:00
Email ThisBlogThis!Share to TwitterShare to FacebookShare to Pinterest
Newer Posts Older Posts Home
Subscribe to: Posts (Atom)