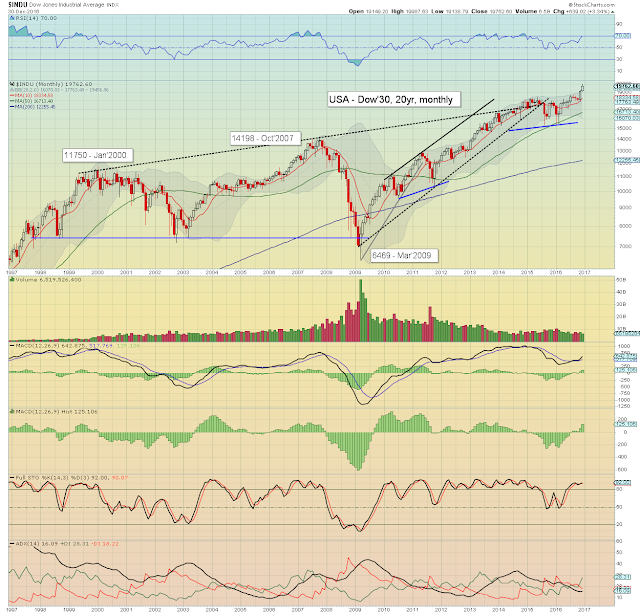 For the year, the mighty Dow gained a significant 13.4%. Underlying MACD (green bar histogram) continues to tick higher, with the key 10MA in the 18300s.

There weren't quite enough buyers to push the Dow through the 20K threshold before year end, but it does seem probable in Jan'/Feb.

The next big fibonacci price target is 26702. Clearly, that is a very considerable way higher, and will take until at least the latter 3-4 months of 2017.
-- 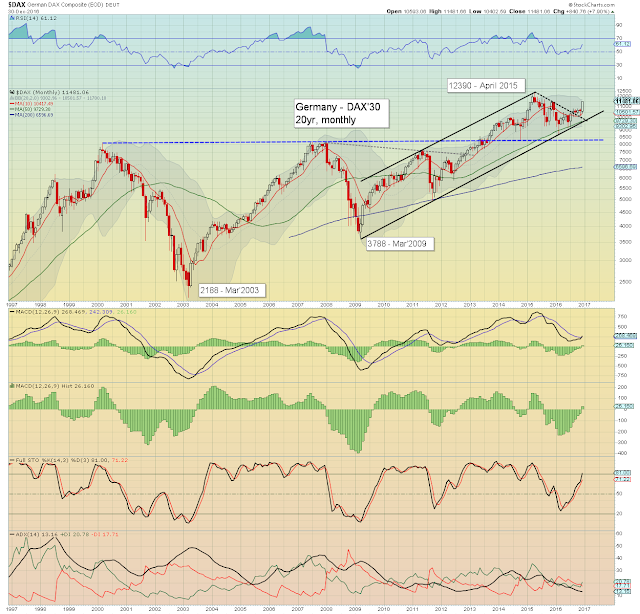 The economic powerhouse of the EU - Germany, saw its market end the year powerfully bullish, with a net Dec' gain of 840pts (7.9%). The late year surge made for a 2016 net gain of 6.9%. Underlying price momentum has turned positive for the first time since summer 2015. Next upside target is the April 2015 historic high of 12390.

For the wave counters out there, the DAX presents the cleanest price structure of all world markets. It could be argued the DAX is in a final fifth wave from the March 2009 low. If you like the notion that the next bear market will be on the order of 50%... and accept that old resistance of 8k is now long term support, then a basic upside target should be 15/16k. That is a realistic target by late 2017. 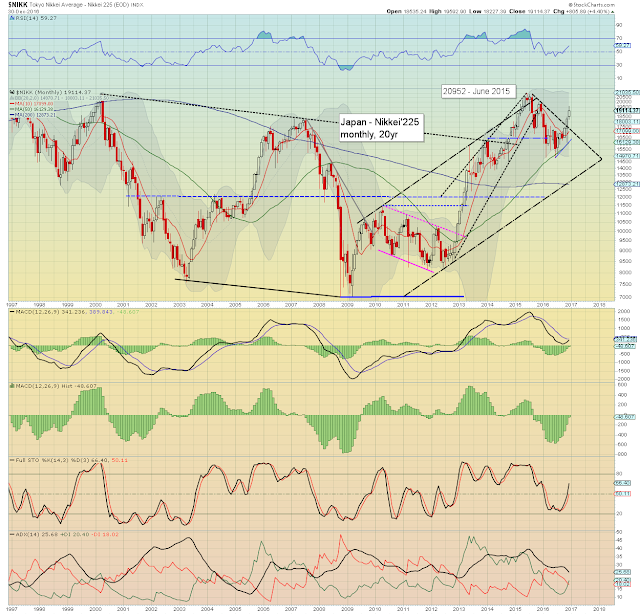 The BoJ fuelled Nikkei gained 805pts (4.4%) in Dec', which made for a net yearly gain of 0.04%. Indeed, considering the ongoing QE, its a pretty lame outcome for the central bankers. Underlying price momentum is set to turn positive in January, and that does bode for an eventual attempt to break above the June 2015 high. 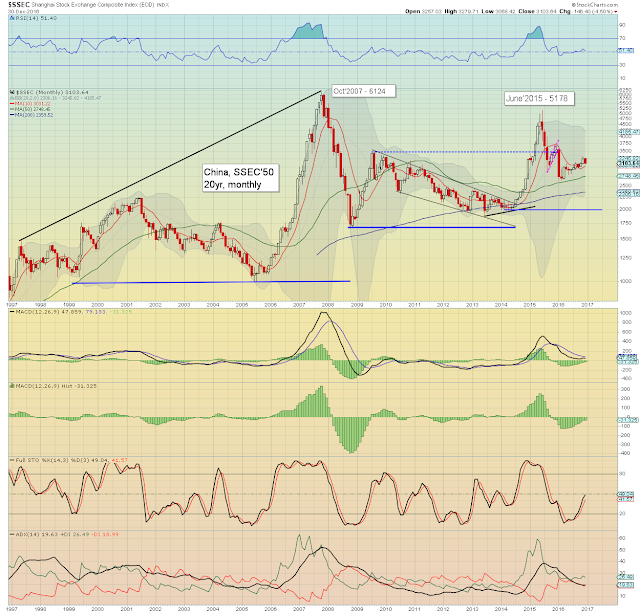 The Chinese market was the big laggard this year, ending the year on a significantly bearish note, -146pts (4.5%) at 3103. This made for a net yearly decline of -12.3%. Its notable that the Shanghai comp' is still almost 50% below the Oct'2007 high. Another way to look at it... the Chinese market needs to almost double to break a new historic high. Clearly, that won't be easy. Broader price structure since the Jan' low of 2638 is arguably a very big bear flag. That will be negated though on any price action >3500. 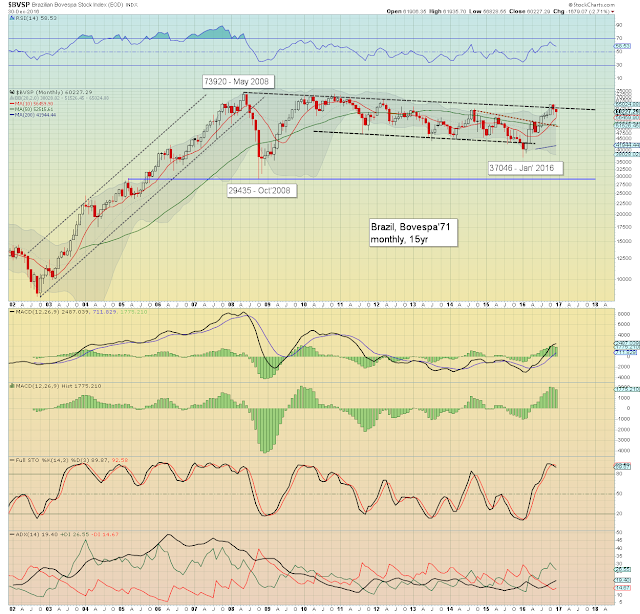 The Brazilian market ended the year on a weak note, -1679pts (2.7%) at 60227. However, that was still a massive 16877pts (38.9%) net higher for the year. There was a clear break above declining trend/channel in Oct', and despite Nov-Dec' weakness, the Bovespa looks strong. Things only turn provisionally bearish with a break under 50k. 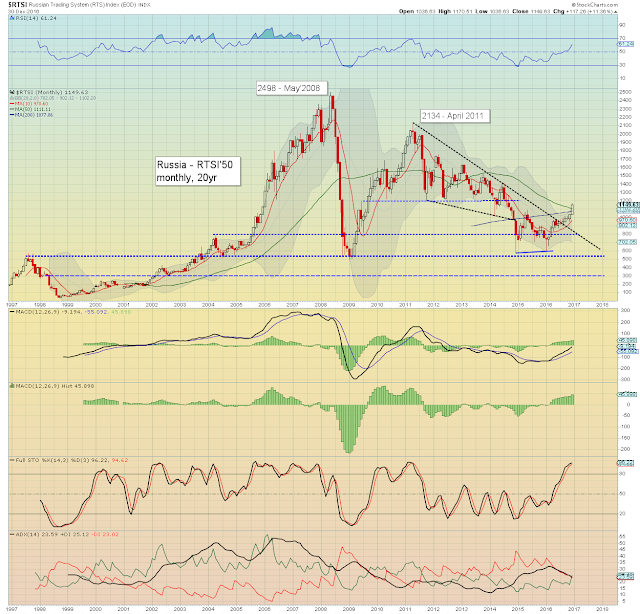 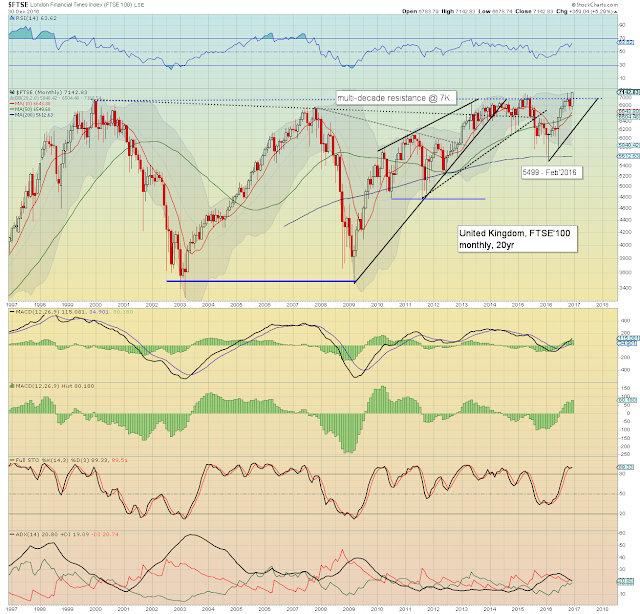 Much like the DAX, for those that believe the next bear market will be roughly 50%... if 7K is now long term support, the FTSE will need to rise to at least 13k or so... and that is a very long way higher. 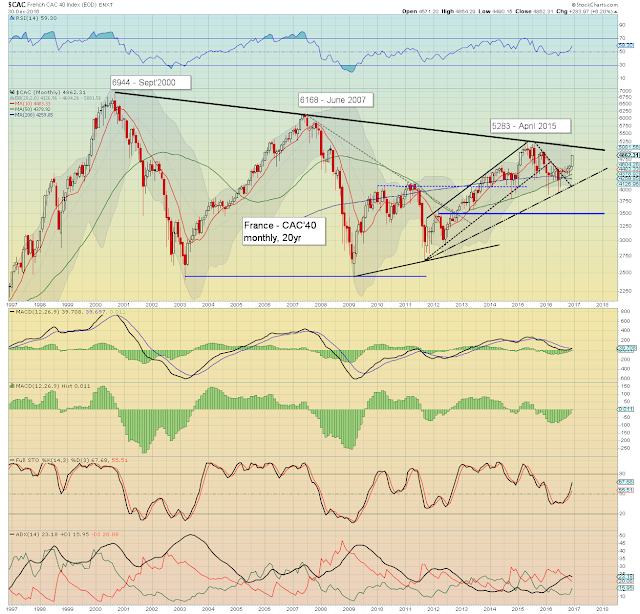 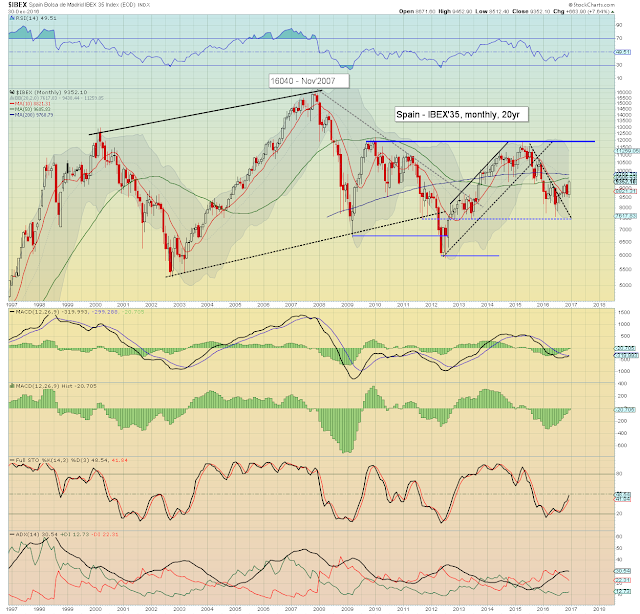 One of the most problematic of the EU PIIGS - Spain, ended the year strong, +663pts (7.6%). That was still not enough to generate a net yearly gain, with the IBEX net lower by -192pts (2.0%). Underlying price momentum is set to turn positive in January. First big upside target is the 12k threshold. Its notable that despite ongoing QE from the ECB, the Nov'2007 bubble high of 16040 is almost double the current level. 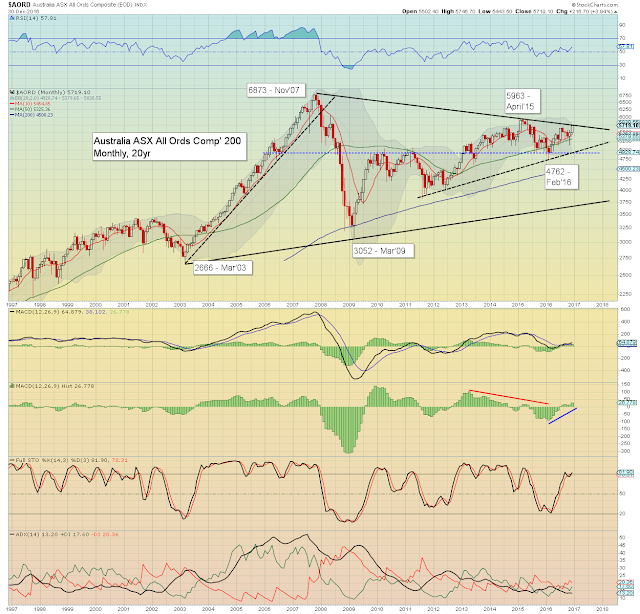 Most world markets ended the year on an especially bullish note, lead higher by Russia and Germany. China and Brazil struggled into year end, but the latter was still massively higher for the year.

A fair number of world markets are only just seeing underlying price momentum start to turn positive, and that does offer another basic 3-5 months of upside.

Another short four day week, but there is plenty scheduled...

*the only fed officials - Evans and Lacker, are due on Fri'.

There is still time to submit your outlook for the year ahead. I'm looking for an end 2017 target for the sp'500, and any of your thoughts for specific matters, whether GDP, inflation, etc.
--

*the next post on this page will appear Tuesday Jan'3rd 2017 @ 7pm EST
Posted by Trading Sunset at 17:00:00
Email ThisBlogThis!Share to TwitterShare to FacebookShare to Pinterest 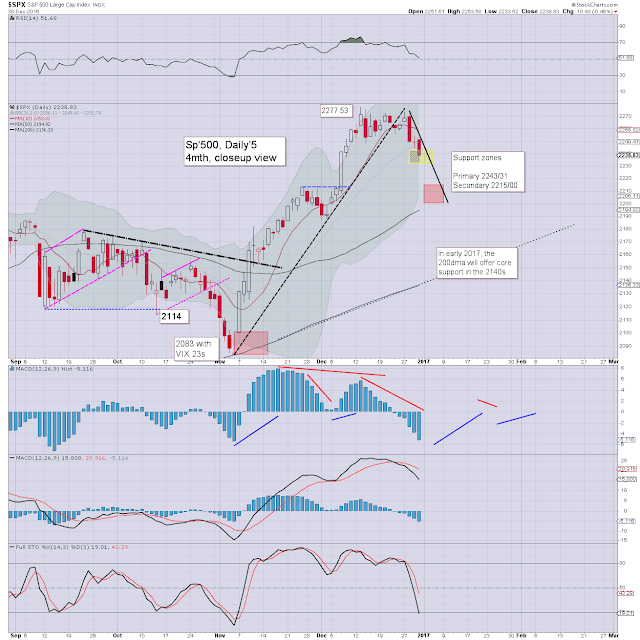 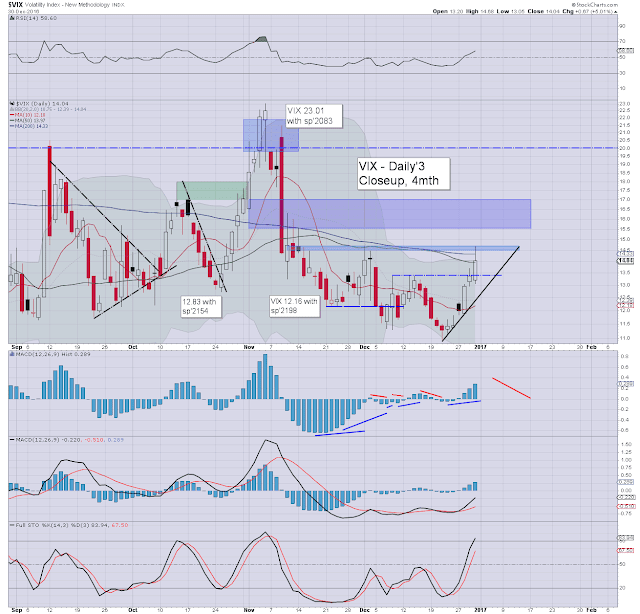 The market opened a little higher, but once again, the gains didn't last more than a few minutes. There was sustained (if moderate) weakness across the day, with a late afternoon low of 2233. The closing hour was naturally pretty choppy.

The most bearish case for next week would be further weakness to around the sp'2200 threshold, which would equate to VIX in the 15.50/17.00 zone. The key 20 threshold still looks out of range for at least a month.
-- 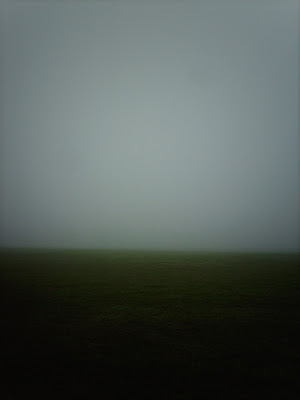 The outlook for 2017 is shrouded in cloud, but isn't it always?

Goodnight from an icy and foggy London
--

*the weekend post will appear Sat' 12pm EST, and will detail the world monthly indexes. Frankly, its my most important post of the month.... and year.
Posted by Trading Sunset at 00:00:00
Email ThisBlogThis!Share to TwitterShare to FacebookShare to Pinterest
Newer Posts Older Posts Home
Subscribe to: Posts (Atom)