The US equity market is starting to break lower. The weekly charts are now very clear, we are in the early phase of a 4-6 week down cycle. The only issue is how far do we drop. Primary target is the sp'1480/70 zone, secondary target is 1430/00, the latter of which looks difficult. 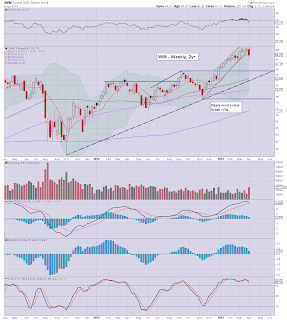 The second leading index saw significant falls, closing the week -2.9%. Next key support is the old resistance highs in the 86/85 area - that's a good 5% lower.

Underlying MACD (blue bar histogram) cycle has conclusively rolled over, and is set to go negative this coming week. The rising 200 MA will be around 73/74 in May/June, and that is the ultimate objective for any bear who believes the indexes have just put in a multi-year cyclical top. 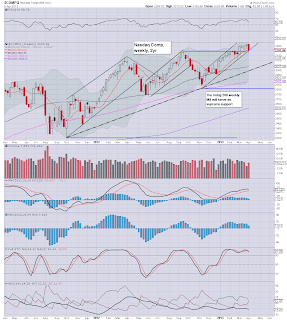 The laggy tech sector broke the weekly rising channel, and looks set to drop a further 3-4% to the 3100 level within the near term. The big 3000 level will be difficult to break though.

The 2800 level remains a massive problem for the doomer bears. Baring a break of that level by late May, we'll probably just start yet another multi-month up cycle across the summer. 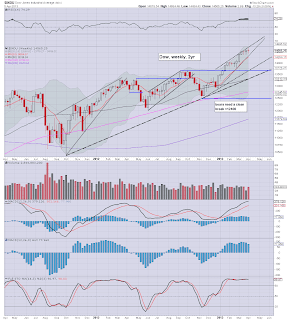 The mighty Dow closed barely 0.1% lower on the week. It sure is one resilient index, and bears are having difficulty just keeping it from rising.

First objective is a weekly closing under the 10MA, which by the end of next week will be in the 14300s. That seems viable. After that, the 4-6 week downside target, best case is 13700/600.  Right now, the notion of the Dow trading under the late Nov' low of 12500 seems impossible 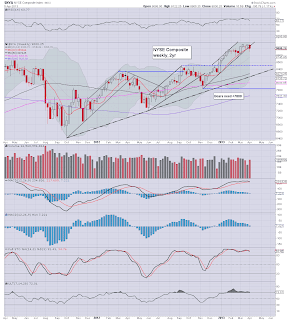 The master index broke the rising channel, and is also showing conclusive signs of a rollover. First target is 8500, that's about 5-6% lower. Underlying momentum is set to go negative next week. 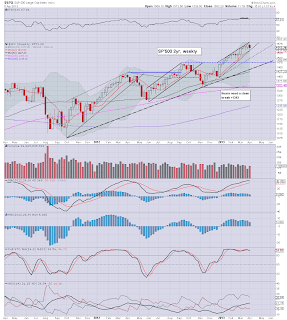 I think its safe to conclude that the Sp' maxed out at 1573, a mere 4pts shy of its Oct' 2007 high. Certainly though, it was not the only index to not break into historic territory - namely the NYSE Comp, and the Nasdaq Comp.

For those doomer bears seeking more dynamic downside across May, it will indeed be critical to break the 1500s before April ends.

A hit of 1480/70 in April will offer the opportunity of much lower levels in May, perhaps as far down as the 1400 level - which would indeed get the market back to flat on the year to date.

MACD cycle is set to go negative in two weeks time, the week of April opex. 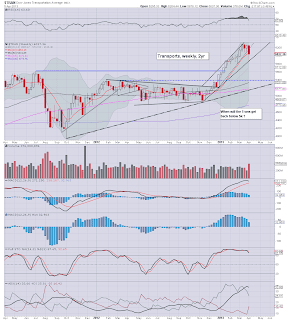 The old leader, - the Tranny, which lead the way up, continues to lead, and slipped a very significant 3.8% across the week - despite a Friday positive close. The trans has broken a tight weekly channel, but remains within a secondary looser channel

It looks like first support is the old resistance highs of 5600/5400, the latter of which is a very significant 10% lower. All the indicators look set to go very bearish within the next week or two.

So...a down week for the indexes, although the Dow remains super tough to break. Overall, I'm very pleased with how the market is now looking.

We have some good breaks of the rising channel - from the November lows, on the Trans, R2K, NYSE Comp, Nasdaq. The SP' is 'borderline'.

In addition to the indexes, there are many other secondary issues out there to support a near term bearish outlook, not least the breakdowns in Copper, the precious metals, and even Oil which saw a severe two day snap lower this past week.

As I like to regularly highlight, the rainbow (Elder Impulse) charts often give some clarity, to what might seem a complex chart pattern.. 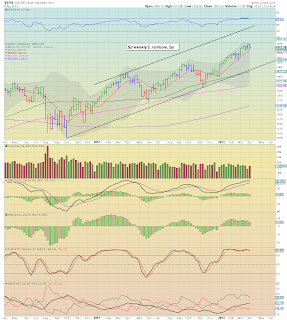 Again, the point I want to emphasise, is that of the rising lower bollinger on the weekly chart. It will be the PRIMARY target across April/May. Just look at the previous down cycles, even the one from May/June 2011.

Essentially, its a case of...'the faster we fall..the further we can fall'.

*Special note..
Those bears seeking much lower levels across this summer should indeed look to the April-July 2011 price pattern. A touch of the weekly lower band, a bounce, then flattop, and finally a collapse wave.
--

An idea for April/May 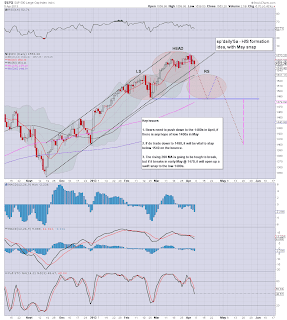 The above is just something I am going to keep in mind as one scenario across the next few weeks. It will probably need to be trashed if we don't break <1500 by end April.

The key issue is that if we can at least break down to the lows seen in late Feb - 1480, by the end of April, there is the possibility we'll set up a RS by mid May.

So long as we don't bust above the 1540s on any subsequent bounce, there will be a chance for a very significant snap lower, maybe even to the low 1400s.

Right now, this is indeed highly speculative, lets see how this looks at the end of April.

In terms of US econ-data, there really isn't much of anything this week, aside from retail sales data on Friday. The most important issue for the market will be the FOMC minutes, to be issued Wednesday (2pm). Once again, it will probably be a case of Mr Market seeking to be reassured that its QE fix/prop won't be ending anytime soon.
-

As ever, thank you to those who do comment, it is always good to hear from you. I'm hopeful next week - regardless of how Monday opens, will be a reasonably good one for those on the bearish side.

back on Monday :)
Posted by Trading Sunset at 18:46:00
Email ThisBlogThis!Share to TwitterShare to FacebookShare to Pinterest

The market has seen an initial decline from sp'1573 to 1539, yet the bulls are still strong, and the latter day recovery with a close in the 1550s made for a frustrating and difficult weekly close. Near term trend does still look weak, with a mid-term primary target of sp'1485/70. 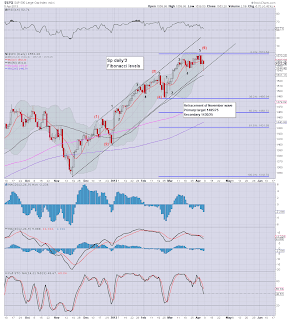 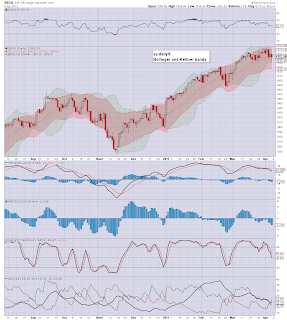 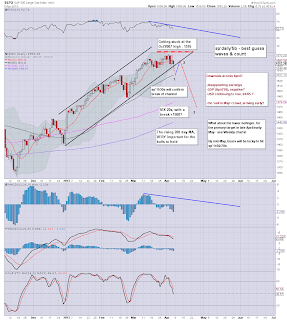 Indeed....today was a problematic one. Being patient is something I am finding increasingly difficult again in this market.

I was lacking patience in an Oil (short) trade on Tuesday, and today I was overly patient with an index (short) trade. It remains 'rarely' easy to meddle in what remains the western world's greatest rigged casino.
-

The fib' chart is pretty clear, assuming 1573 was the high, the first reasonable downside target across April/May is the 1485/70 zone. Its a good target, since the old resistance high from last September were the 1470s.

The second chart is an odd one I realise, but its just to emphasise the 'likely' range we have in the coming days. Bulls are going to find it VERY difficult to break above the mid 1560s - see also hourly chart, whilst bears need to see a break under the key low of 1538.

For the bears, the days..and weeks ahead are probably going to be just as difficult as the previous few years. Any major gaps lower at the open are still being bought..and today wasn't even a POMO day!

Well, its the weekend..so...have a good one.

Video Bonus..from Oscar
*note that the video was created around Friday lunch time.
--

Interesting that even Mr Carboni is having problems. I think the OMNI was calling for a higher open on Friday. The Transports remains a key index to follow..and if - as I believe it is, breaking lower, then we do have a multi-week down cycle now underway.
Posted by Trading Sunset at 04:00:00
Email ThisBlogThis!Share to TwitterShare to FacebookShare to Pinterest

The indexes opened sharply lower, but as has been the case for what seems like a thousand years, the bulls managed a latter day recovery. Most indexes closed only 0.2-0.5% lower. The Transports actually managed a daily gain of 0.4%, with a rather distinct flooring spike.

I will highlight all six main indexes today, since we have something important to keep in mind 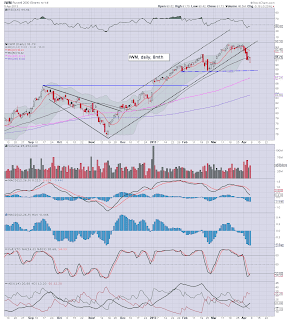 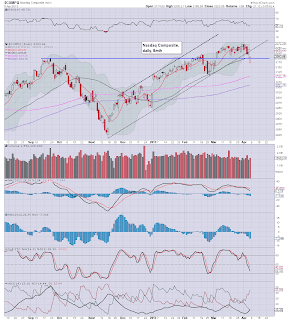 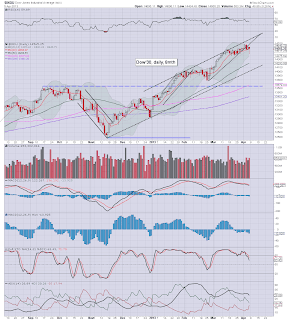 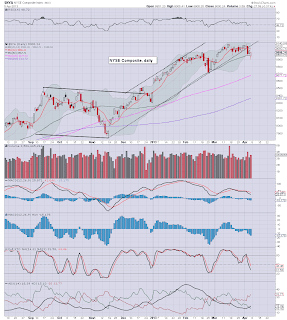 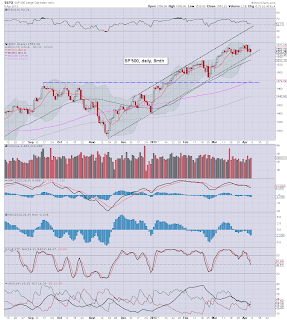 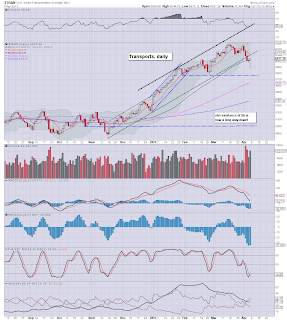 The important aspect for the bears to take away from today - despite the annoying latter day recovery, is the fact that another index broke below key rising support from the November low.

We now have the Rus'2000, Transports, NYSE Comp, and the Nasdaq Comp all below the old rising channel. The SP' did briefly spike below the lower channel, although it depends on how you draw it.
--

Baring a rally to new highs on most indexes - in particularly the Trans and R2K, I'm not overly concerned at the Friday closing action.

Further, the weekly charts ARE rolling over, with the VIX still comfortably above the March low of 11.05.
--

How will we open Monday? VIX hourly chart has good potential for upside, and bulls have already seen a bounce from sp'1539 to 1554. The next key resistance is 1563..and for the big/serious money on the short side..that's where a tight stop could be placed.