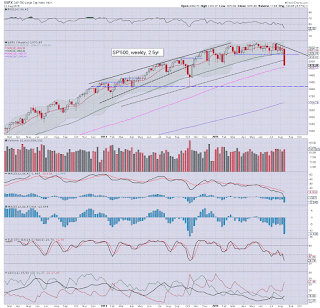 The sp'500 has so far been unable to find a floor, having taken out a number of key lows, along with the psy' threshold of 2000. Underlying MACD (blue bar histogram) cycle has ticked massively lower, and is at levels not seen since last Oct'.

In terms of a bounce, the weekly 10MA will be resistance in the 2070s across the next week or two... with an initial resistance zone of 2040/50. On no reasonable outlook does it look like the sp' can sustainably trade back above 2080 for some months.

*re: near term outlook, see summary for a few of the key scenarios. 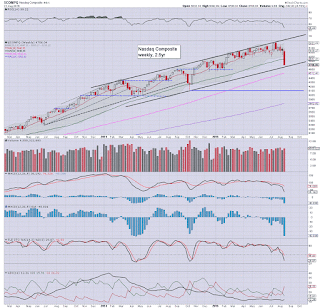 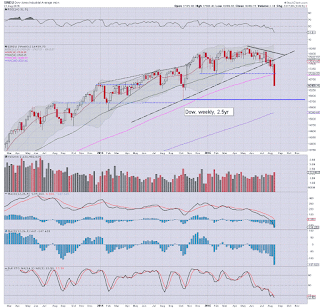 The mighty Dow saw a net weekly fall of a very severe -1017pts (5.8%) this week. With the loss of the 17k threshold, next support is not until 16k... which is where the lower monthly bollinger is lurking. The Oct' low of 15855 is now within range.

In terms of a bounce within the next 1-2 weeks, there will be very natural resistance at what used to be support at 17000. Sustained price action above the rapidly falling 10MA (next week @ 17500) looks out of range for some months. 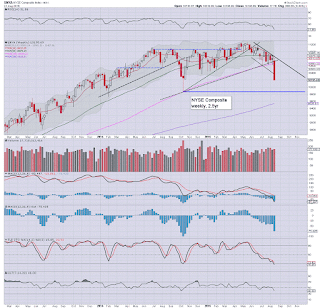 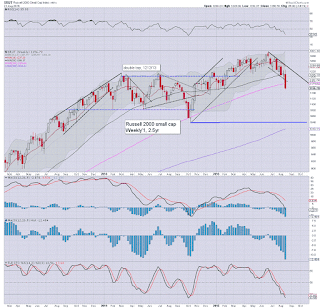 The second market leader fared better than all other indexes this week, settling lower by a 'mere' -4.6% @ 1156. Next key support is the 1100 threshold. If that fails... then the Oct' low of 1040. Despite increasingly bearish price action, sustained trading under the giant 1000 threshold looks extremely difficult in the remainder of the year. 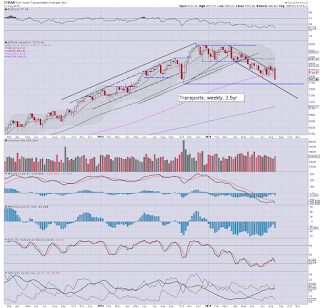 Without question, the wildest trading week since August 2011. Not only have the bears continued to break new lows, but the rate of decline has greatly accelerated, with clear technical breaks on all indexes. A fair number of the US indexes are now within close range of the Oct' 2014 low.

Regardless of any bounce across the next week or two, further declines - perhaps at an even more accelerated rate, look due in September.
--

Near term outlook - five of the key scenarios

1. China cut rates, with other PBOC stock-buying intervention. China market soars.. and drags the US/Europe higher at the Monday open.. and that continues until at least Wed/Thursday.

3. China/PBOC do nothing.. and the Shanghai comp' drops <3500... with US indexes resuming collapse mode.

4. China/PBOC do nothing... but the Shanghai comp' still rallies.

I'd give a probability on scenario 5 of 5%. It is highly unlikely, but the setup is there.. and momentum is unquestionably increasingly bearish across all world equity markets.
--

Secondary.. if Monday/early week collapse.... I would consider going long from the low sp'1800s. Yes, I realise the latter target looks out of range in the near term... but it is possible. Hell, the NYSE circuit breakers don't initially kick in until a -7% index drop.

There isn't much scheduled next week.

There will be a key meeting of economic/financial leaders at Jackson Hole next Thurs/Friday, but like the past two years, there will be no appearance by the Fed chair.
-

As usual, the Sunday night US futures market will open at 6pm EST. How that will open.. difficult to say, it could easily be swayed strongly higher if the PBOC act on Sunday.

More importantly... regardless of whether the PBOC do anything, the China market will open at 9.30pm EST. If the Shanghai comp' loses 3500 - a threshold many agree as critical, and if the PBOC don't intervene, then overnight/Monday could effectively see a mini market crash wave sweep through most world equity markets.

*I will very likely post updates across Sunday evening from 6pm EST onward.

As ever... its always good to hear from some of you.. so say hello if you like.

Have a good weekend.
Posted by Trading Sunset at 17:00:00
Email ThisBlogThis!Share to TwitterShare to FacebookShare to Pinterest

The wait is finally over

Across the last few years I have periodically highlighted the giant monthly Elder Impulse 'rainbow' chart for the sp'500. With the decline into the 2030s and lower..., the monthly candle for the sp'500 has turned an outright bearish red, and bodes for increasing downward pressure in the coming weeks.. and possibly months. 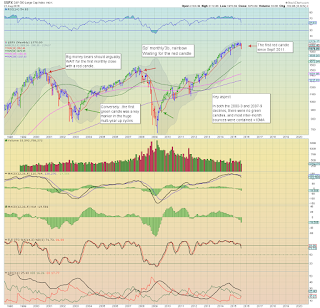 As I noted just a few days ago, we have a rather clear rounded top on the sp'500, which is following the earlier break in the Transports.. and more recently, the Dow.

Regardless of any bounce next week/early September, further severe downside looks due. The Sept' candle looks set to test the Oct' low in the low 1800s.. which just a few days ago was unthinkable to many.
--


This video is doing the rounds, and I think it should wrap up the week...


Goodnight from London
--
*the weekend update will be on the US weekly indexes
Posted by Trading Sunset at 04:00:00
Email ThisBlogThis!Share to TwitterShare to FacebookShare to Pinterest

US equities closed severely lower for the second consecutive day, sp -64pts @ 1970. The two leaders - Trans/R2K, settled lower by -2.7% and -1.3% respectively. Near term outlook is uncertain, and will be largely dependent on whether the PBOC take action this weekend. 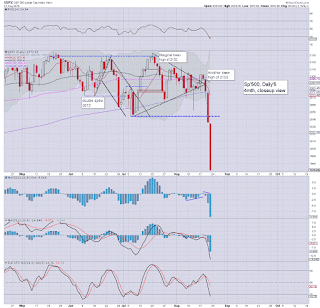 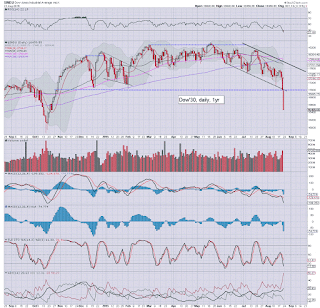 Pure outright horror across all the main US indexes.
-

With the loss of the 200dma yesterday, the sp'500 is in collapse mode... and so far, utterly unable to find a floor.

The Dow is similarly in collapse mode, unable to hold the key 17000 threshold.. and is well on the way to next support around 16000.

We've simply not seen declines of this style since 2011.. as has been reflected in the VIX exploding into the upper 20s.

Near term outlook most certainly offers a bounce, but there will be initial resistance around sp'2040/50. Under no 'reasonable' outlook does sustained action >sp'2080 look possible for some months.