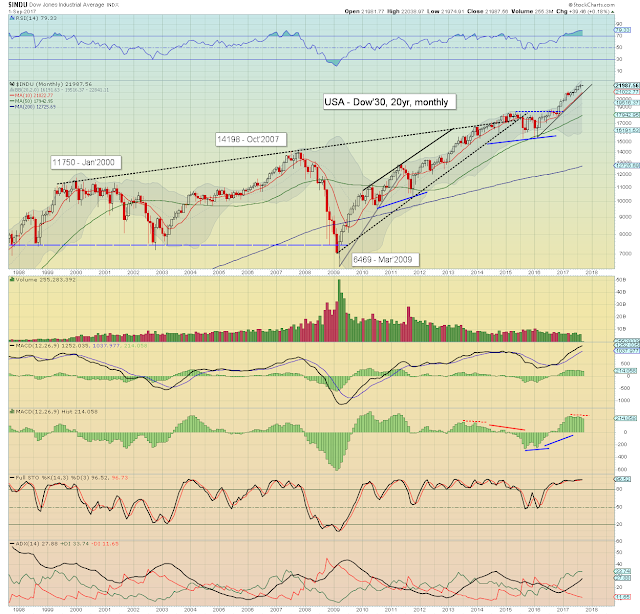 Best guess: despite ending August on a rather positive note, the US market looks highly vulnerable to a 5% correction, and that does not assume any geo-political upsets. A 5% retrace will knock off a clear 1000pts. Even if that occurs, it does not preclude a year end close >23k.

For now, there is zero reason to be mid term bearish. That would only change with a monthly close (whether Sept', Oct', or beyond) under the key 10MA.
-- 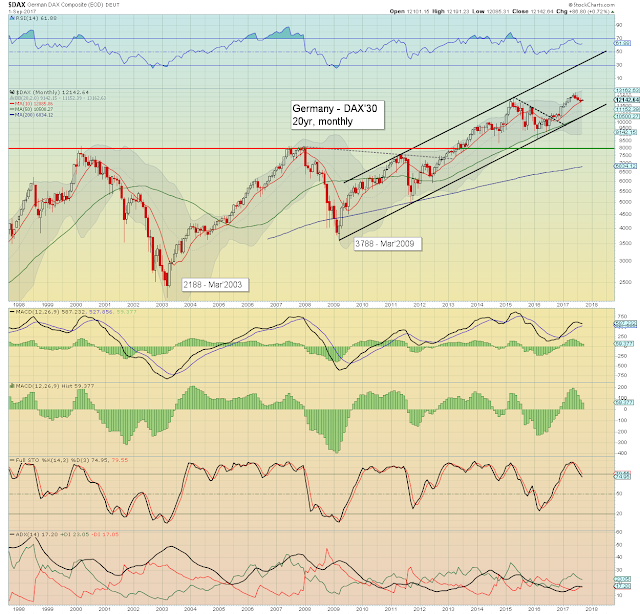 The DAX cooled for a third consecutive month, -62pts (0.5%) to 12055, managing to settle above the key 10MA. With the Sept'1st open, the key 10MA now stands at 12085. Any monthly close under it, would open the door to downside to the giant threshold of 8k, which is a rather monstrous 33% lower, and would directly equate to the sp'1500s. The '5 wave' counters should appreciate the very clean price structure of the DAX since 2009. 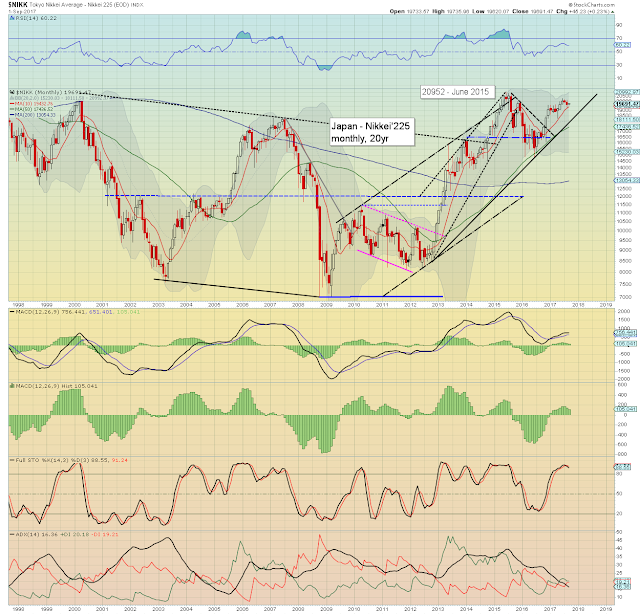 The BoJ fuelled Nikkei cooled for a second month, -278pts (1.4%) to 19646. Things would turn provisionally bearish with a Sept' close under the Aug' low of 19280. Core support is not until the 17800s. At the current rate, a bearish MACD cross is possible in October. 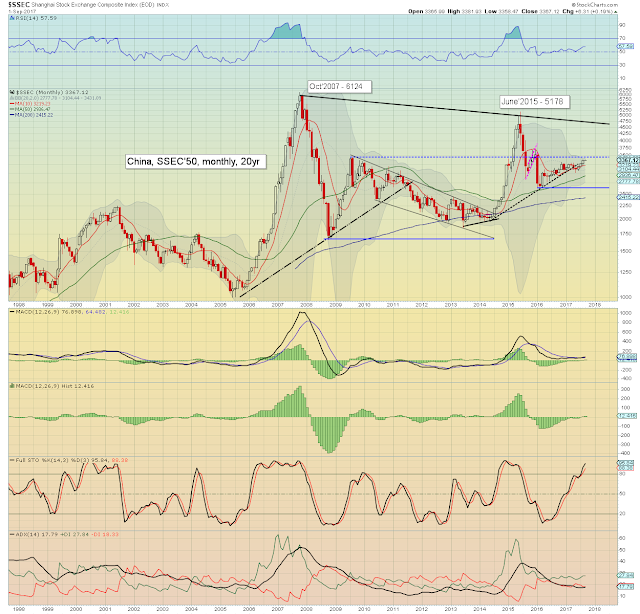 Chinese equities climbed for a third month, +87pts (2.7%) to 3360. There is a great deal of resistance within the 3400/500s. Even with the latest 'meddling' at the behest of the communist leadership, a break into the 3600s looks difficult, certainly before November. 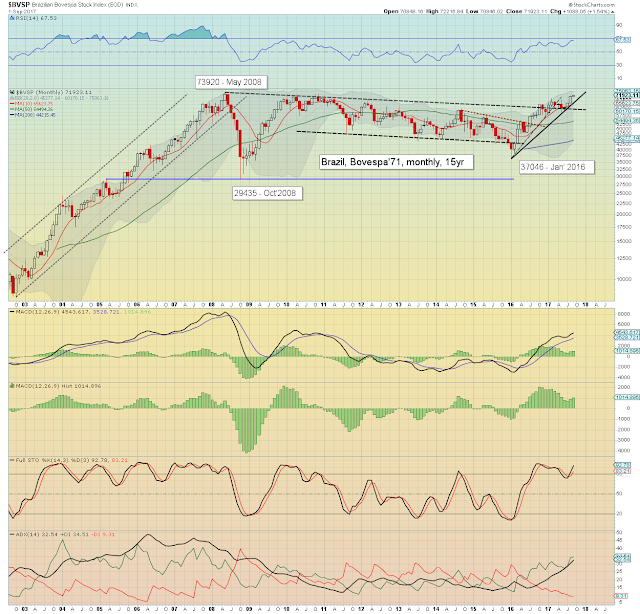 The Bovespa is leading the way, settling higher for a third month, +4914pts (7.5%) to 70835 - the second highest monthly settlement (first: May 2008 - 72952). Near/mid term outlook is bullish, as a challenge of the 2008 high of 73920 is clearly within range before year end. As ever, commodity prices have a huge impact on the Brazilian economy and market. Considering ongoing subdued commodity prices, the Brazilian market is actually a lot stronger than it actually appears. 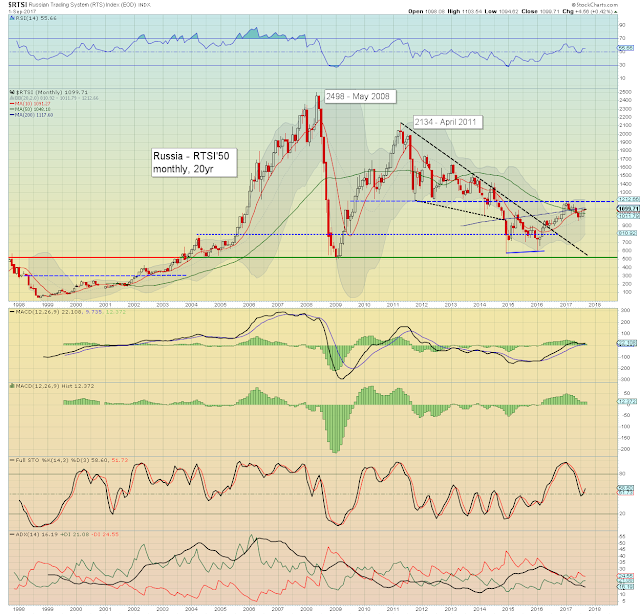 Russian equities climbed for a second month, +83pts (8.3%) to 1095. The 1200 threshold remains paramount. If that can be cleared, its open air to the 1500/700s. Much like Brazil, the Russian economy is heavily swayed by commodity prices, especially oil/nat' gas. Near term outlook for energy prices is weak, and the Russian market will likely be prevented from seeing the 1200s until at least November. 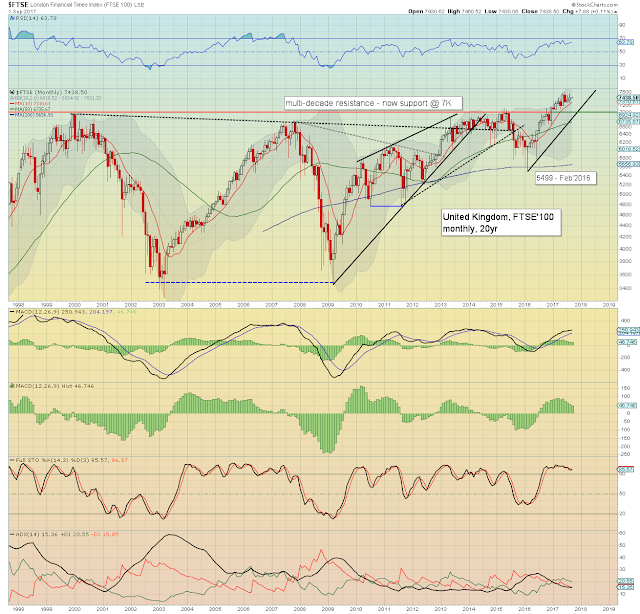 The UK market climbed for a second month, +58pts (0.8%) to 7430. Price action since May has been increasingly choppy and stuck. A significant reason is unquestionably due to underlying political turmoil, as another election seems a given by summer 2018. Technically, the FTSE only turns provisionally bearish with a monthly close under the key 10MA - currently at 7310. Major alarm bells would sound with ANY price action <7k, but right now, that looks a very secure threshold. 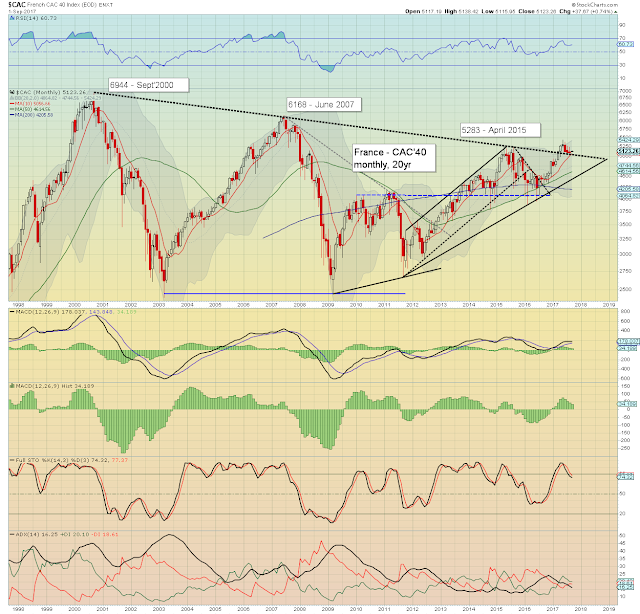 French equities settled lower for a third month, -8pts (0.2%) at 5085. The May black-fail candle remains notable, and it has certainly played out across the summer. However, for now, the breakout above the key threshold of 5k is holding. 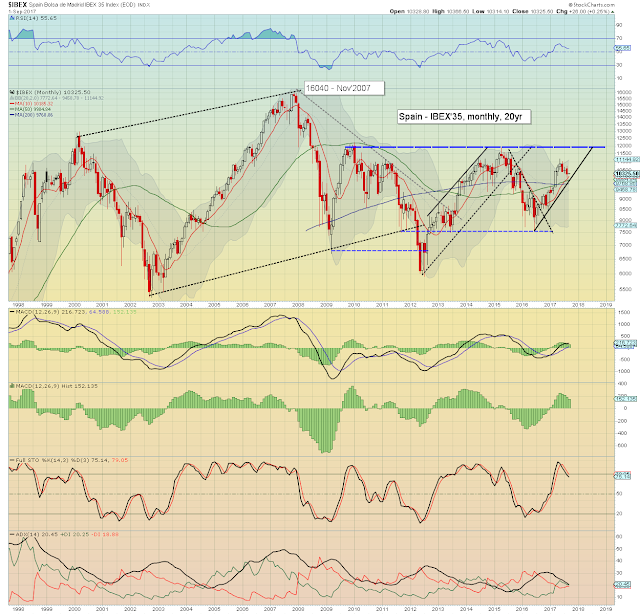 Spanish equities struggled in August, settling -202pts (1.9%) to 10229. However, it could be argued price structure is a multi-month bull flag. Bulls will need to see some price action >11k to give some confidence. Bears need to see a break <10k, which is currently just 3.2% lower. 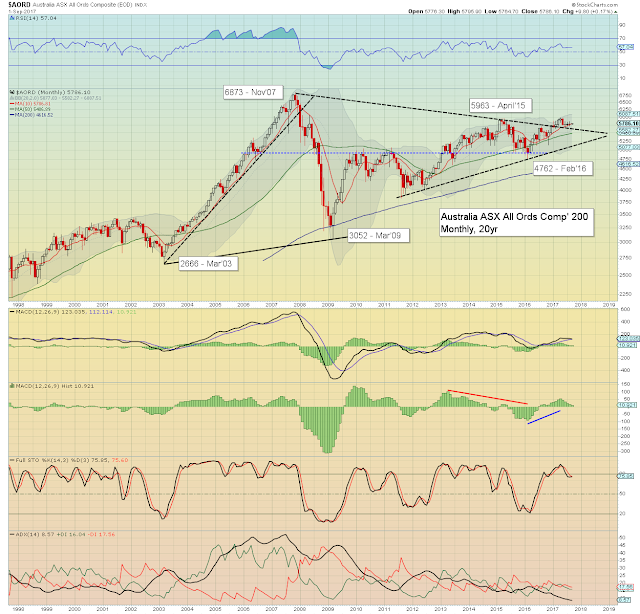 The Australian equity market climbed for a third consecutive month, +2pts (0.04%) to 5776. Its notable that price action since June has been extremely narrow range. Underlying (green bar histogram) MACD cycle has been ticking lower since May, and is threatening a bearish cross in Sept/Oct, on even a moderate wave lower. The 'bearish break' threshold is arguably any price action <5600.
--

August was a very mixed month, as world equity markets are increasingly disparate.

Commodity dependent markets - such as Brazil and Russia, saw powerful gains, whilst there was weakness across many of the European markets.

For now, the mid term trends - from early 2016, remain bullish, although many markets are close to multiple aspects of key support.
--

*there are a fair number of Fed officials on the loose, notably Dudley on Thursday (in AH)
--