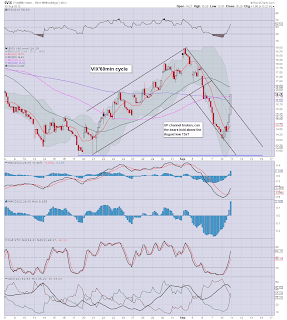 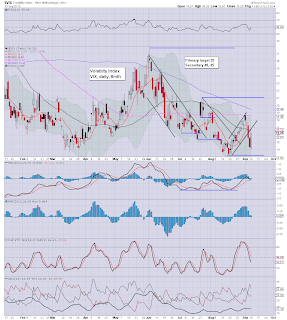 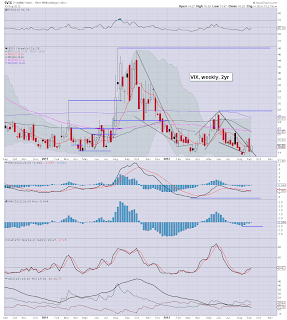 Today's VIX increase is interesting, but bears should not get even moderately excited yet. VIX'16 is not exactly a volatile market, and until we're over 20, bears should be very cautious.

The down channel on the hourly cycle is conclusively broken though. First support is the 10MA, which will be around 15.25 by the close of tomorrow.

The daily cycle would suggest 18.50 is possible later this week, which is around 15% higher.
-

The bigger weekly cycle remains something of a mess. Last week closed with a giant bearish engulfing candle, today certainly helped to turn things around a bit, but until we break over 19..and arguably 20, the market remains largely fearless.

After all, since everything is fixed in the global economy, why worry?
Posted by Trading Sunset at 23:00:00
Email ThisBlogThis!Share to TwitterShare to FacebookShare to Pinterest

Moderate declines in the closing hour, but it remains very minor. It still looks we have bull flags setting up on most indexes, and those bodes well for one further up move to around 1445, that could occur as early as tomorrow.

The VIX rise of 11% is interesting, but with the VIX only in the 16s, its to be largely dismissed. 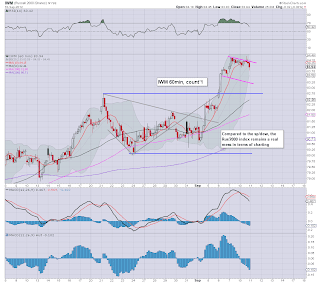 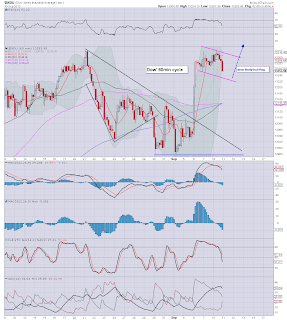 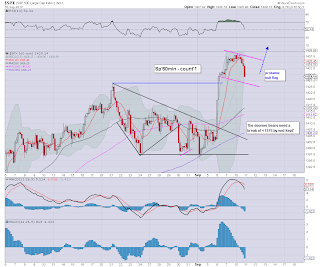 So, I'm going to guess the bull flag is largely complete.

From a MACD (blue bar histogram) perspective, we are VERY low on the cycle, and we could very easily open considerably higher at the Tuesday open.

Even though I expect a move to 1445, I sure won't be buying this dip, I'd rather wait for a near term top.

With the German court ruling, and the FOMC due, today and tomorrow are going to give everyone the chance to get positioned.

Your resident permabear remains trying to be patient!

More across the evening
Posted by Trading Sunset at 21:06:00
Email ThisBlogThis!Share to TwitterShare to FacebookShare to Pinterest

Everything remains on track for a further move higher to around sp'1445 tomorrow. 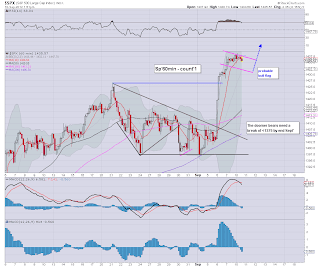 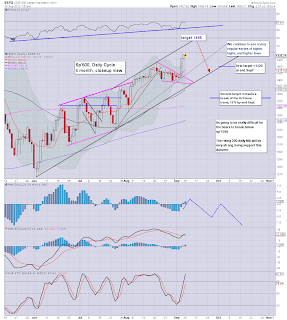 Not much to add. Low volume churn, whilst the hourly cycle fully resets, allowing a good sp+10pt move tomorrow.

It remains a near perfect bull flag on the hourly index charts. With the daily trend still cycling higher, those patient bears looking to short a top, don't have to wait too much longer.

Oh, and the transports is having a good day - a probable warning of upside in the dow/sp tomorrow.. 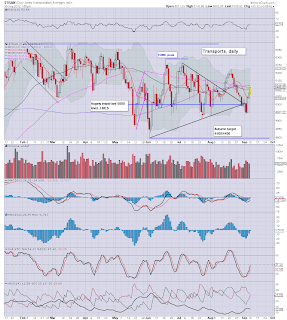 More after the close
Posted by Trading Sunset at 18:56:00
Email ThisBlogThis!Share to TwitterShare to FacebookShare to Pinterest

Market is very content to hold and trade sideways today. It makes for a pretty good bull flag on many of the indexes.

In theory, we should see a further up wave tomorrow, and considering the broader trends, sp'1445 could be the near term top. First downside target would be 1420. 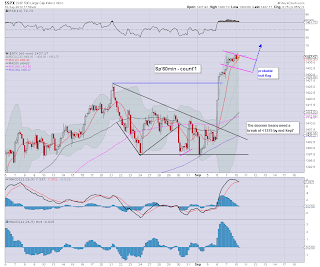 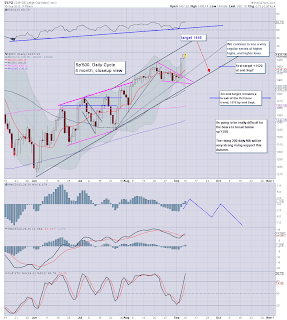 I remain patiently awaiting, seeking a re-short around 1445 tomorrow afternoon. I am very tempted to be short ahead of the German court. Not because I assume a 'nein nein nein!', but from a cycle perspective, we are way due at least one major down day.

VIX is a touch higher, but its all noise of course.

back at 2pm
Posted by Trading Sunset at 17:02:00
Email ThisBlogThis!Share to TwitterShare to FacebookShare to Pinterest

10am update - big week ahead

Good morning. We have a big week ahead, with the German court ruling on the ESM (Wednesday), and the FOMC (Thursday, 12.30pm).

The opening declines are to be treated as noise, near term trend remains UP. 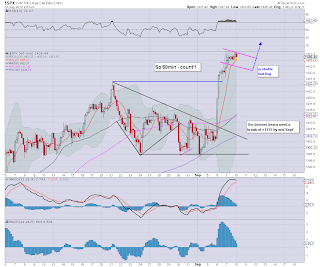 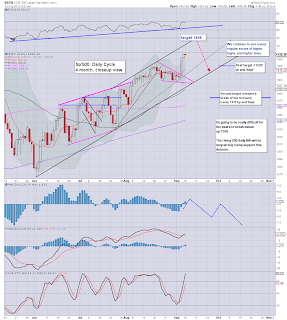 Primary target is sp'1445 tomorrow, at which point i'll look to re-short this nonsense market. There seems a very viable likelihood of at least one major down day, if only to shake out the weaker bulls.

I'm not expecting anything today, a flat close, or fractional green closes across 'some' indexes seems likely.

VIX is flat, looking for a jump higher Wed/Thursday.

It does look like today and tomorrow will provide good opportunities for everyone to re-position.

Back at 12pm.
Posted by Trading Sunset at 14:54:00
Email ThisBlogThis!Share to TwitterShare to FacebookShare to Pinterest
Newer Posts Older Posts Home
Subscribe to: Posts (Atom)