After yet another insane week in market land, its a little difficult to know what to add. Much has already been covered elsewhere, and I'm certainly not confident any longer of the much touted 'big wave lower'. Maybe that is a good contrary sign of a capitulation top?

Anyway..here are the weekly index cycles... 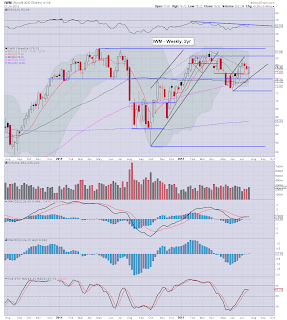 The curious thing about the Rus'2000 index, it has lost its leadership. Its still pretty volatile, but its again lagged the dow/sp this past week. You can see we did put in yet another lower high and a lower low on this index.

For the doomer bears out there, this remains (along with the transports) the index to watch for any signs of renewed weakness in the broader market. 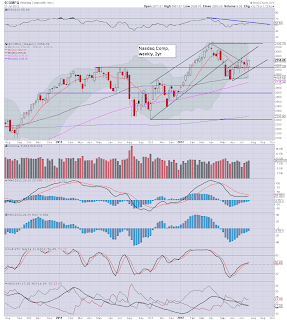 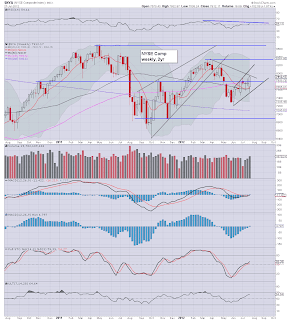 The master index is approaching the big 8k level. A few closes over this, and bulls can begin a fierce charge to break the ultimate 8718 peak from May 2011. 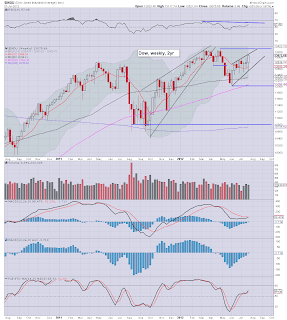 The dow'30 saw a 550pt swing this past week, a pretty big move! The two day hyper ramp of Thur/Friday has now taken the dow to the key 13k level, and we're just 270pts or so from the May'1st peak. If QE3 is announced -or even 'overtly hinted' at this coming Wednesday, the dow could break/hold over 13400...and then a challenge to new all time highs IS viable.

For the bears, until we see a break under dow 12400, confidence must surely remain low. The doomer bears should still be targeting 11k in the next down cycle - however the monthly cycle is now outright bullish. 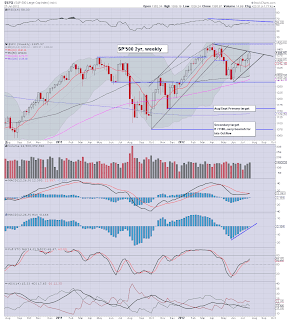 Only with a move under 1325 can the bears start to take any declines seriously. 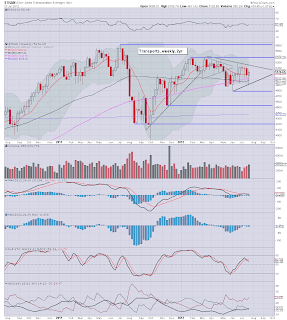 A weekly close over 5300 would be extremely bullish. Bears need a close under 4900 to get confident, and a monthly close under 5000 - which now looks somewhat unlikely by this coming Tuesday.

Without question, this past week ended strongly bullish. Contrary to what a lot of 'them' are saying out there, we have seen the monthly sp and dow turn outright bullish. This trend change is a severe warning to the bears. It could be a brief fake-out, but..if it is, it sure better flip back lower within a week or two.

The near term trend IS up. Lets get that agreed on first of all. We've seen a strong bounce from the early June low of 1266. We're now 120pts above the low. Even more bullish is the fact we keep bouncing strongly whenever we do manage to sell off. Mondays opening decline was very significant (not least with the VIX +26%)..but it failed after just 20 minutes, and we closed Friday 3.5% higher  than those lows.

The bulls ARE in control right now. If I can see it, it bemuses me how so many others out there seem in complete denial.

If QE3 is announced this Wednesday, the indexes will surely break to new highs..and we'll likely push up to sp'1500/1600 by the year end. Now THAT is a viable scenario, even though it is completely contrary to how the economic fundamentals are trending. But then, its not like the market hasn't ignored the 'facts' many times before, is it?


Looking ahead to the next Fed day

So, lets see what the FOMC decide this Wednesday. At the very least we can expect a statement of somewhat 'suggestive' of future QE, and that could easily lead to a continuation of the current up cycle. What should also be a very depressing realisation to the bears is that even if nothing of substance is announced this week, then the market will probably immediately start looking towards the next FOMC of Thursday Sept'13th.

*for the record, I'm still short, but I sure am not confident of a decent exit in the coming week.

Back on Monday.
Posted by Trading Sunset at 19:28:00
Email ThisBlogThis!Share to TwitterShare to FacebookShare to Pinterest
Newer Posts Older Posts Home
Subscribe to: Posts (Atom)