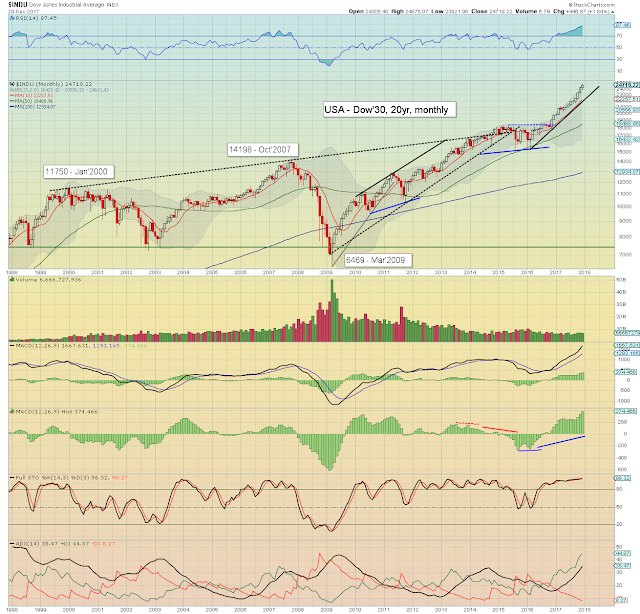 Best guess: there is threat of some cooling in Jan/Feb' of 3-5%. Ironically, that would merely make for a mini washout, before another major surge across the spring/summer. Next key fib' level is 26702, which is 8% higher. At the current rate of increase, 30k is a valid target for 2018, with a secondary key fib' of 34430.

Equity bears have nothing to tout unless a bearish monthly close. For me, that would equate to a monthly close under the key 10MA, currently in the 22200s, and which is rising around 400pts a month. So, from June 1st onward, the 26600s will be 'technically' on offer. I do not expect any bearish monthly closes in the near/mid term.
-- 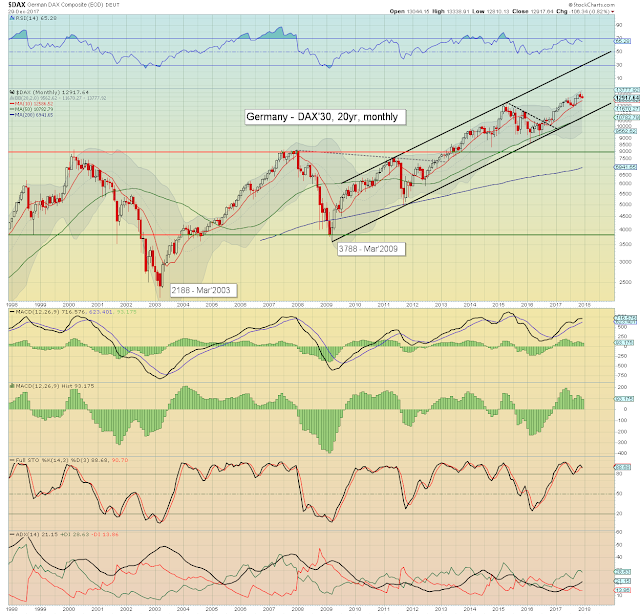 It would really help the financials - not least Deutsche Bank, if the ECB raise rates at least once in the latter half of 2018. Right now, Draghi is showing zero sign of doing that. If the Fed raise rates another 2-3 times by autumn 2018, the ECB will be under severe pressure to begin normalisation. 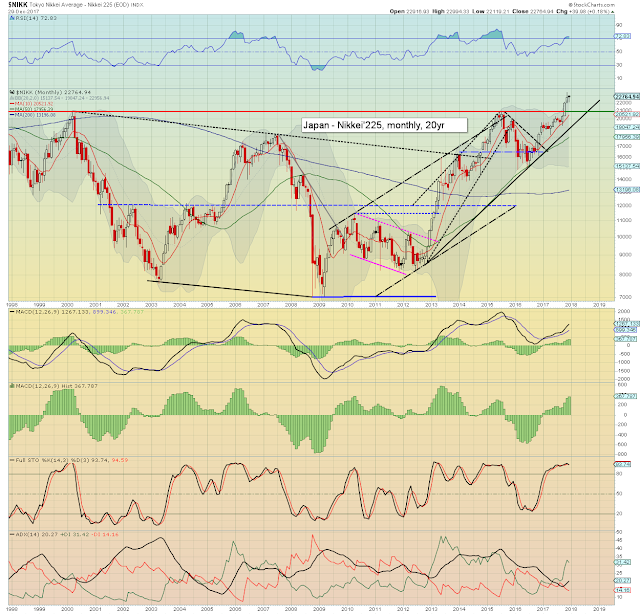 The Japanese market climbed for a fourth month, +0.2% to 22764, which made for a net yearly gain of a very powerful 19.1%. Most notable this year was the sustained break above key resistance of 21k. Next stop is 25/26k. I'd imagine the printing staff at the BoJ are very pleased with their work this year. Some babies would also help, but there will be fewer of those in Japan in 2018, than this year. 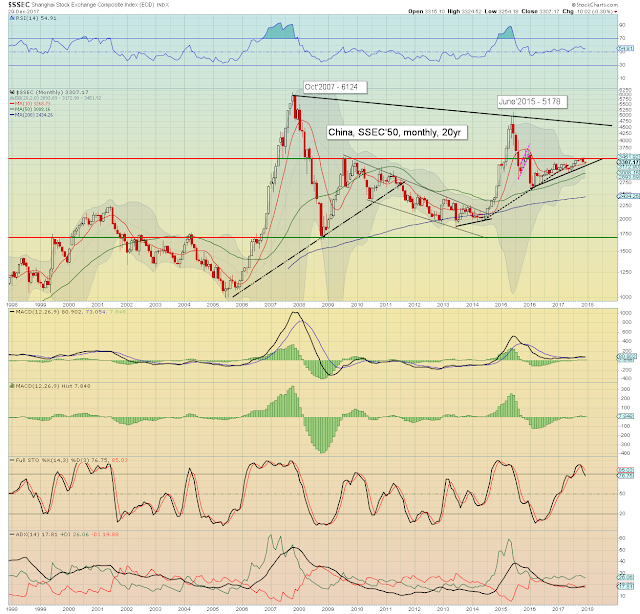 The Chinese market leaned weak into year end, settling -0.3% at 3307, but that still resulted in a net yearly gain of a reasonable 6.5% There remains very powerful resistance within the 3400/500s. An eventual upward break is probable, and that will offer 4500 by late 2018.The communist leadership would clearly like higher prices to placate the populace, but they are understandably concerned about a bubble similar to 2015. No doubt, the PBOC will be busy across 2018. 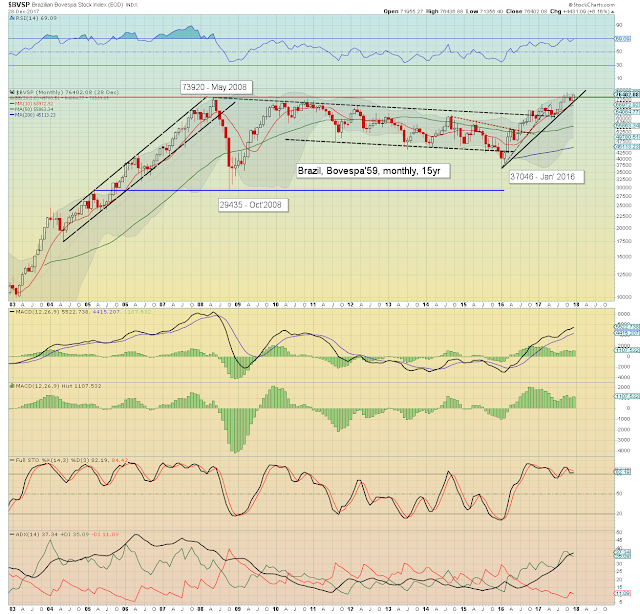 The Brazilian market was higher for the 6th of 7 months, settling +6.2% at 76402, making for a very powerful net yearly gain of 26.8%. Note the December close is above the May 2008 high, which gives confidence 80k will be seen by mid 2018. More broadly, 100k is on the menu. Clearly, that will require sustained/significant strength in commodities... which itself seems probable. 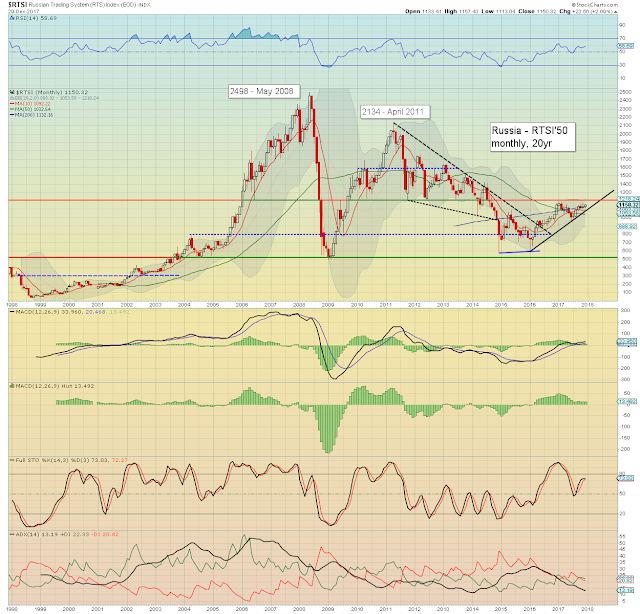 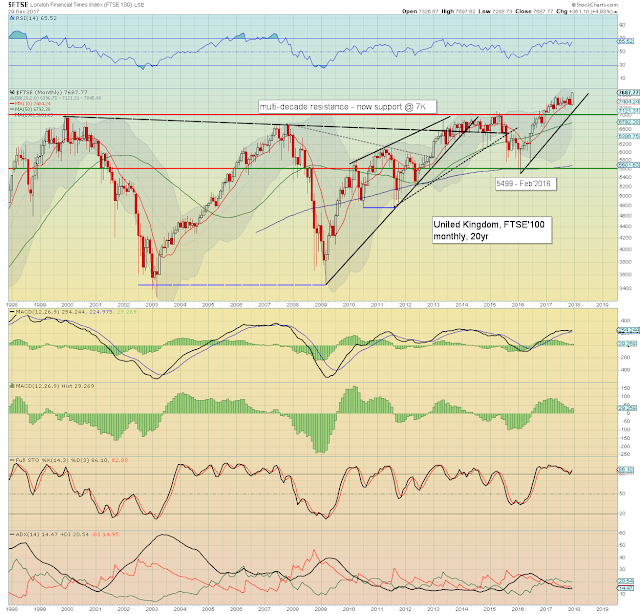 The UK market ended the year on a particularly bullish note, settling +4.9% to 7687, with a notable new historic high of 7697. Price action across 2017 has been very choppy, but its extremely important to recognise that old multi-decade resistance of 7k, is now confirmed support. The 8000s are clearly coming into the spring. More broadly 10k is a valid target for end 2018. The hyper bulls should be seeking 14/15k before maxing out. The natural low in the next bear market would be no lower than 7k. 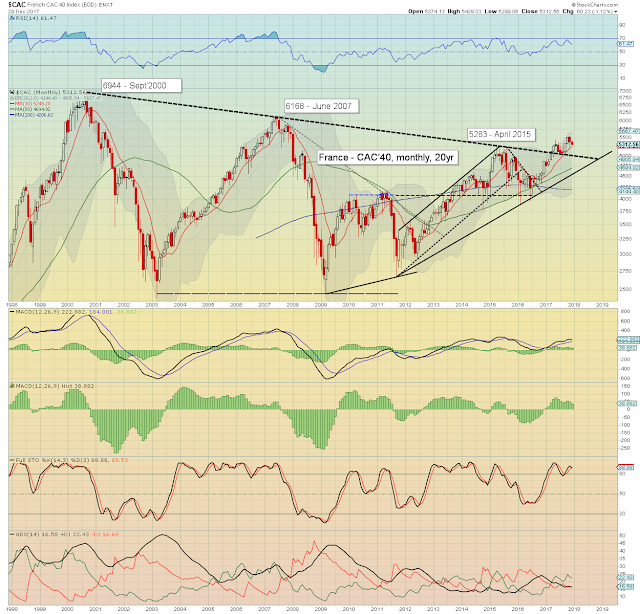 The French market settled lower for a second month, -1.1% to 5312, however that still resulted in a net yearly gain of a very significant 9.3%. The most important aspect this year was the break of declining trend that extended back to Sept'2000. We saw a text book breakout, then a back test, with a new high in Nov' of 5536. Next soft target is the June 2007 high of 6168. That seems a valid target for the summer, with viable new historic highs (>6944) before end 2018. Will Macron copy Trump, and start to tout the strong equity market as a sign of his 'inspiring leadership'? 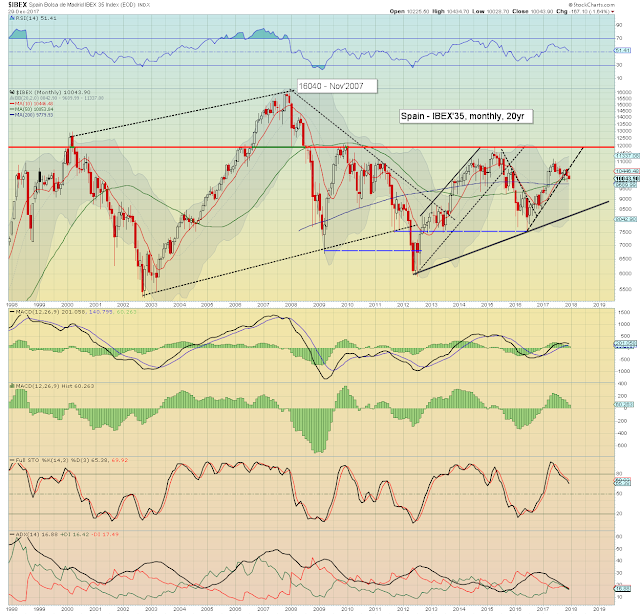 The Spanish market settled lower for a second month, -1.6% to 10043, but still making for a respectable net yearly gain of 7.4%. Its notable the IBEX peaked at 11184 in May, and then declining by -10.2% across eight months. The 'Catalonia situation' was obviously the core reason for the choppy cooling. Spanish equity bulls should be desperate to see a break above multi-year resistance of 12k. If that can be achieved, it will open up grander upside to 15/16k in 2019/20.

As one of the infamous 'PIIGS', it does remain the case that the Spanish economy has underlying structural problems. For now, things are ticking along, but the next recession would cause particular social unrest, and re-ignite the Catalans, who are seemingly content to just let things drag out for another few years. 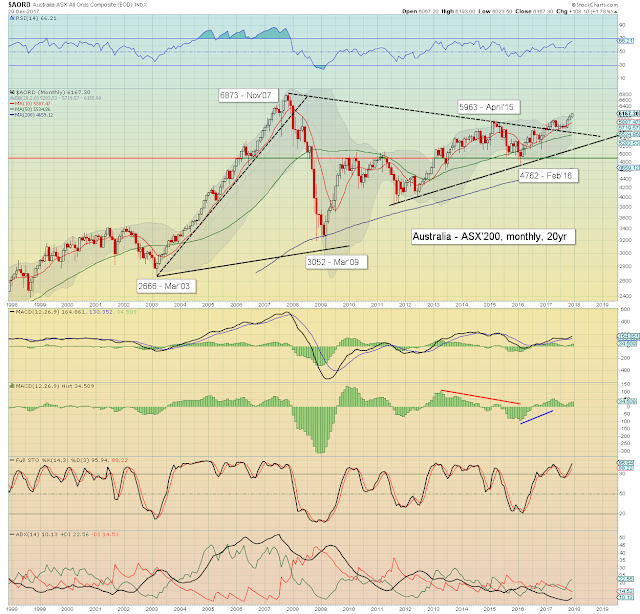 The Australian market settled higher for a third consecutive month, +1.8% to 6171, making for a net yearly gain of 7.9%. Price action is similar to the French market, with an important break of multi-year declining trend, a back-test, and then another push upward. Next soft target is the Nov'2007 historic high of 6873, which is 11.4% higher. That does seem on the menu within 6-9mths. Commodity price action is going to be particularly important to the Australian economy/market in 2018.
--

A mixed December, with 6 markets net higher, and 4 net lower. Brazil, USA, and the UK are leading the way higher, whilst Spain and China are lagging.

A broadly bullish year, with 9 of 10 markets significantly higher. Only the Russian market saw a fractional net yearly decline, but even that looks set to break above key resistance in early 2018.

Most markets are offering basic upside of 10% by mid 2018 (including the USA). If commodity prices pick up - as seems probable, then the rate of increase will accelerate.

*there are just a couple of fed officials on the loose, notably Bullard (Thurs'), and Harker (Fri').
--

Secondary: ANY other issues you'd like to raise, whether equity indexes, individual stocks, GDP, jobs, inflation, oil, gold/silver/copper, bonds. You can even highlight anything socio-political.
--

You can submit your target/outlook via Twitter ( https://twitter.com/permabear_uk ), Disqus (in this, or any future post), or email. If you want to change anything, let me know.

The deadline for submissions: The weekend of Jan'6/7th

I will likely post my outlook for 2018, along with your submissions, the weekend of Jan'6/7th.
--


If you value my work, subscribe to me.
For details: https://permabeardoomster.blogspot.co.uk/p/subscriptions.htm

*the next post on this page will likely appear 6pm EST on Tuesday, Jan'2nd 2018.
Posted by Trading Sunset at 17:00:00
Email ThisBlogThis!Share to TwitterShare to FacebookShare to Pinterest
Newer Posts Older Posts Home
Subscribe to: Posts (Atom)