Todays action was kinda dull, nothing significant yet. Lets take a brief look at the VIX

VIX is still failing to show any significant moves, although the underlying negative cycle - that has been ongoing since last October is likely soon coming to an end. Immediate upside target remains 20/21, max' upside 24/26 on any brief surge. 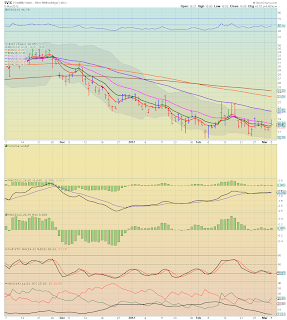 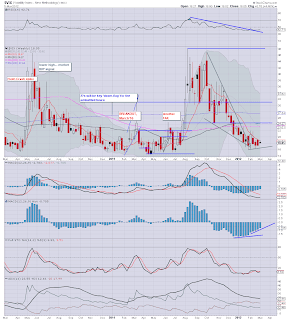 Note the MACD cycle, its still around 2-3 weeks until positive cycle begins. Even if VIX 20/22 is hit this, it'll likely be another 2 weeks until we get a confirmed VIX buy signal. Those holding other VIX instruments like VXX/TVIX should be able to comfortably hold until then.

What is good is that we do seem to have a very secure floor now of VIX 16.
Posted by Trading Sunset at 21:46:00
Email ThisBlogThis!Share to TwitterShare to FacebookShare to Pinterest

Just a single chart each for those shiny precious metals! 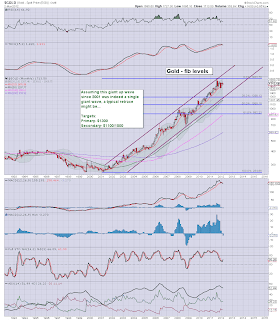 Gold remains in an extremely strong 11 year up cycle. The 2008 deflationary collapse wave is a mere minor set back in the scheme of things.
A pullback to 1300/1200 seems very easy to attain. I've seen many of the cycle analysts also tout around the $1200 zone in the past year. Right now, sub $1000 looks unlikely, considering the long term vulnerability of all FIAT currencies. 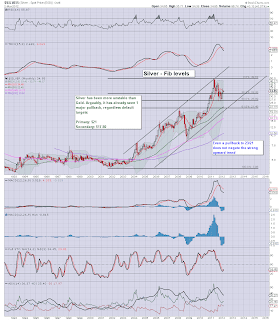 Like Gold, Silver is similarly in an astoundingly strong up cycle. From a mere $4 to $49 in 11 years! However, Silver does suffer more than Gold in any pullback. In this chart, you can clearly see the impact of the 2008 collapse wave.

Right now, a pullback as low as $21 seems very reasonable - in any near term deflationary wave.

Both Gold and Silver are without question two of the simplest means to have an insurance policy to protect against the insane printing maniacs.

So, current best guess for any near term (6-18month) pullback for Gold and Silver.... $1200 and $20 respectively.
Posted by Trading Sunset at 03:58:00
Email ThisBlogThis!Share to TwitterShare to FacebookShare to Pinterest
Newer Posts Older Posts Home
Subscribe to: Posts (Atom)