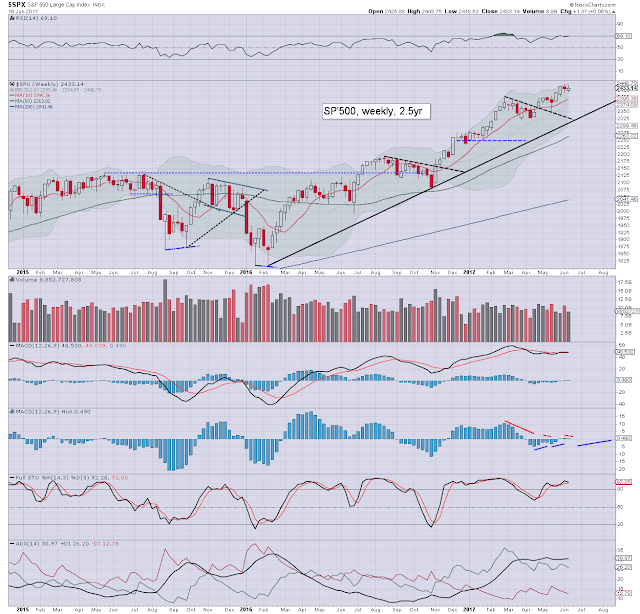 Best guess: short term weakness to around the 2400 threshold, the 2390s on a stretch, before clawing back upward into July and across the summer. A retrace of around 5% is due in Sept/Oct. Broadly, a year end close in the mid/upper 2600s appears very much within range.

Equity bears have nothing to tout unless a break under multiple aspects of support, currently 2280/300, and rising by around 25pts a month.
-- 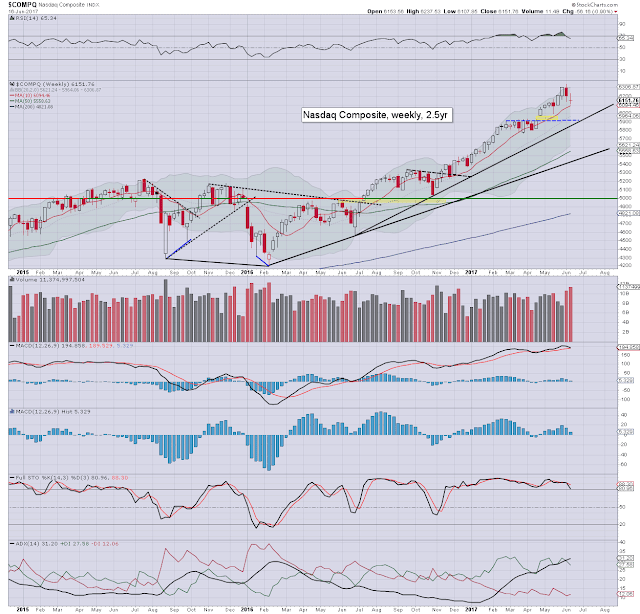 The Nasdaq has broadly lead the US market higher, but is clearly seeing some short term weakness, with a second consecutive net weekly decline, settling -0.9% to 6151. It is notable that underlying MACD (blue bar histogram) cycle will turn negative at next Monday's open. The 6K threshold will offer initial support. No price action <5900 can be expected in the near term. The 7000s seem a given before year end. 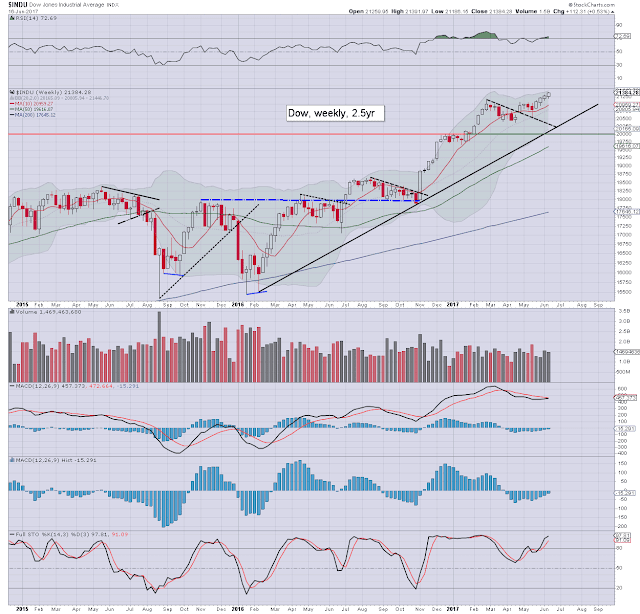 The mighty Dow broke a new historic high this week of 21391, settling +0.5% at 21384. A bullish MACD cross is due next week, as the upper bollinger will be offering the 21500s for end June. The 22k threshold is just about within range by end July, but that will clearly require Q2 earnings to come in at least marginally 'better than expected'. The 23000s are a valid target by year end, but that will require no retrace much above >5% in Sept/Oct, and at least one, if not two, more rate hikes. 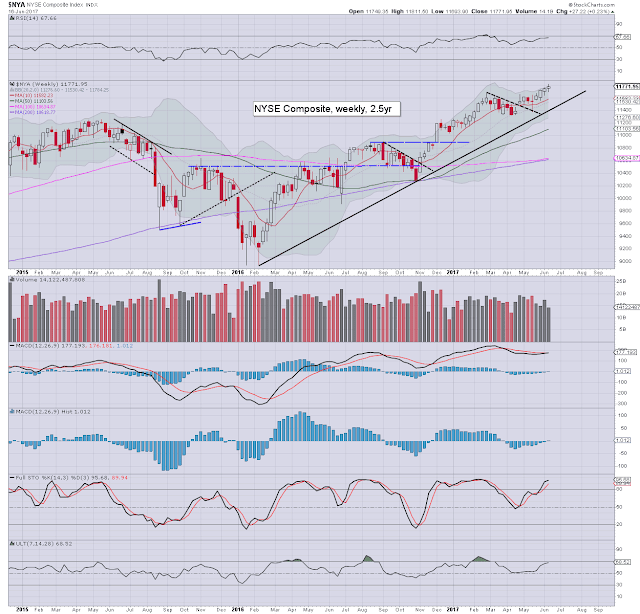 The NYSE comp' broke a new historic high of 11811, climbing for a fourth consecutive week, settling +0.2% at 11772. Underlying MACD has turned positive for the first time since late March.Things only turn bearish if a break <11500 from July onward. 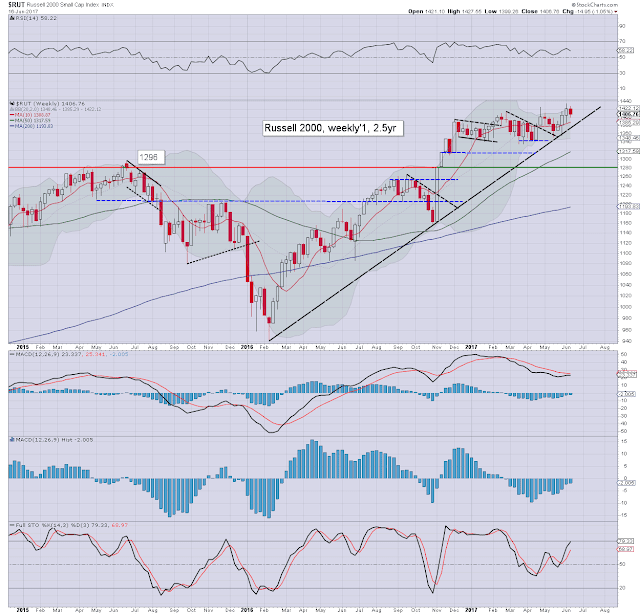 The second market leader - R2K, was the weakest index this week, settling -1.0% at 1406, but that is just 27pts below last week's historic high. There are a few aspects of support around 1390. Things only turn a little bearish <1360. Underlying MACD cycle remains negative, but price momentum is continuing to claw back toward the zero threshold. 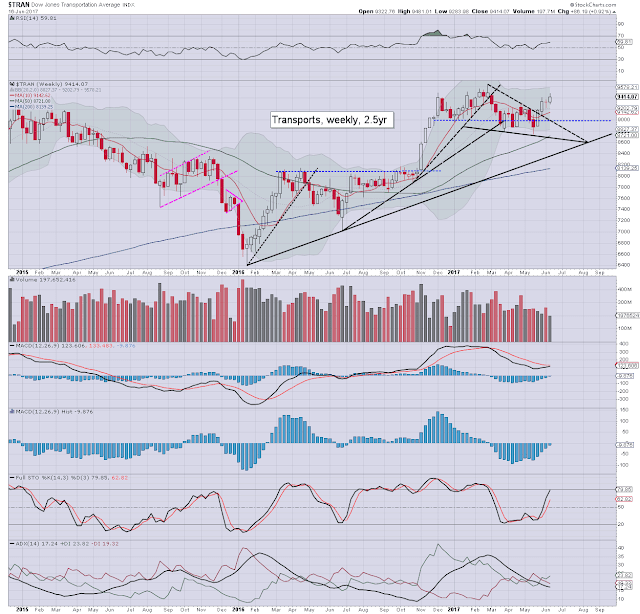 The 'old leader' - Transports, was the strongest index this week, settling +0.9% at 9414, which is just 2.4% below the historic high of 9639 from February. Underlying MACD is set to turn positive cycle next week, and bodes for the 9600/700s in July/August. The giant 10k threshold looks highly probable by late summer.
--

All US equity indexes remain within their upward trends that stretch back to early 2016.

The US equity market is still regularly generating new historic highs, usually lead by the Nasdaq.

There is downside buffer of around 5% for most indexes, before core support is at risk of being broken.
--

There is very little of significance scheduled, and that will give the Mr Market more time to dwell on geo-political issues.

*the next post on this page will likely appear 7pm EST on Monday.
Posted by Trading Sunset at 17:00:00
Email ThisBlogThis!Share to TwitterShare to FacebookShare to Pinterest 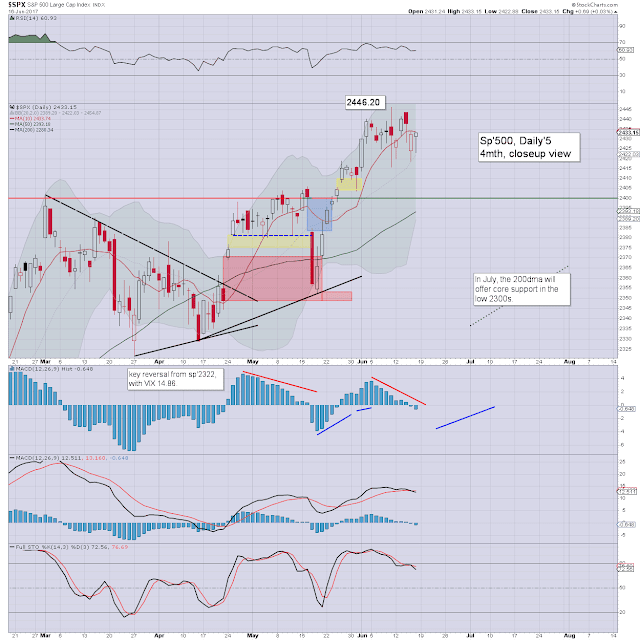 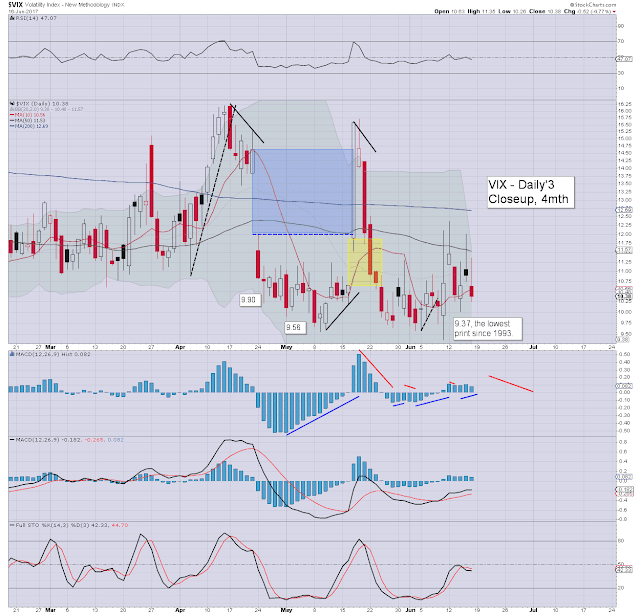 There is little to be said about today. Being quad-opex, it was a day of moderate chop, with all indexes settling close to flat.

Volatility remained subdued, but the VIX did notably manage to stay out of the 9s.

*the weekend post will appear Sat'12pm EST, and will detail the US weekly indexes
Posted by Trading Sunset at 00:00:00
Email ThisBlogThis!Share to TwitterShare to FacebookShare to Pinterest
Newer Posts Older Posts Home
Subscribe to: Posts (Atom)