With the indexes swinging back lower, the VIX managed to close the week, month, and quarter, higher by 6% to 15.73. This remains a bizarrely low level of course, and still infers near complete market complacency. 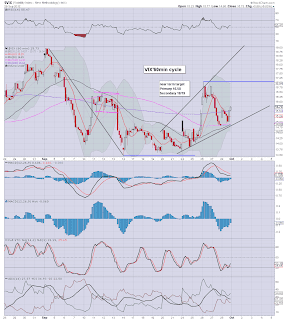 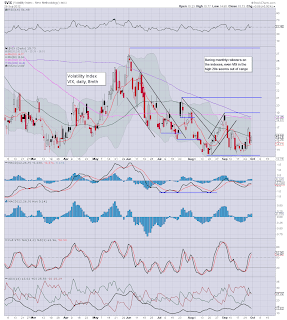 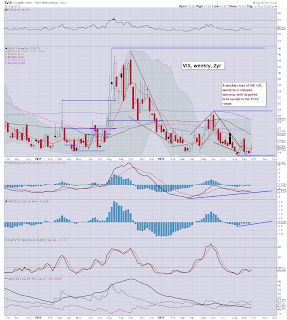 Looking ahead to next week, there is potential for VIX upside all the way to 19 by the Monday close. So, the bear can dream of that possibility across the weekend ;)

The underlying - and hugely important, weekly cycle, is still a touch negative on the MACD (blue bar histogram) cycle. There is certainly big potential for a move into the 24/26 traditional resistance zone.

At some point, the VIX will explode higher, the only issue is when. Are we going to have to wait until next year, or.. are the doomer bears going to get at least a little fun before Santa arrives?

With the tranny closing <5000 for the first time since Dec'2011, I'm somewhat inclined to still have hope for an 'entertaining' Autumn.

More later...
Posted by Trading Sunset at 23:00:00
Email ThisBlogThis!Share to TwitterShare to FacebookShare to Pinterest

A bit of a choppy closing hour, and with the VIX closing near the high of the day, its moderately suggestive of a bearish Monday and start to Q4. 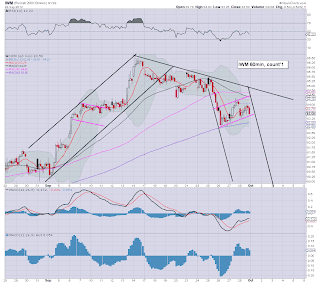 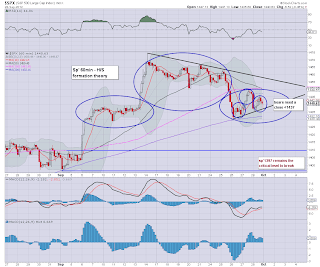 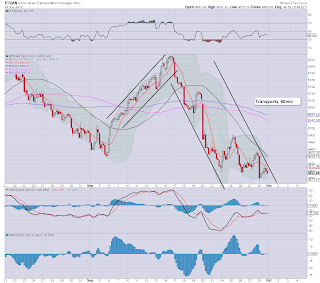 I really quite like the idea of a small H/S within what 'might' be a larger H/S formation. If correct, it actually suggest 1410/00 is possible before the current down cycle completes.

I've seen others out there seeking 1375/60 next week. I find that pretty optimistic, although the VIX weekly chart offers good upside into the mid 20s.

With the tranny closing <5000 for the first time since Dec'2011, my primary red flag for October has been achieved. Much more on that issue later.
Posted by Trading Sunset at 21:08:00
Email ThisBlogThis!Share to TwitterShare to FacebookShare to Pinterest

The early afternoon rally appears to be loosing steam, and we are now slipping lower again. The sp'1440 level is certainly an important level, and whichever side we close on it, will be a good indicator for how we trade early next week. 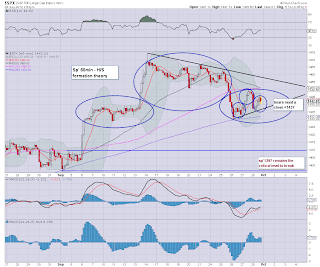 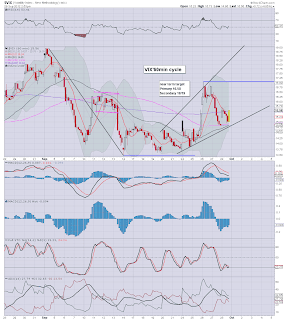 A good close would break the lower rising channel of 1437. Anything <1435 would really confirm it.

VIX is starting to pick up, and is battling back higher on the hourly cycle. Target remains 18/19.

More after the close
Posted by Trading Sunset at 19:55:00
Email ThisBlogThis!Share to TwitterShare to FacebookShare to Pinterest

As the harvest moon rises over the treetops, the market continues to ramp higher, the algo-bots seem to be battling for a green close to end the week, month, and economic quarter..

The VIX remains only fractionally higher. 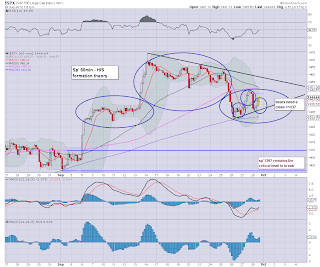 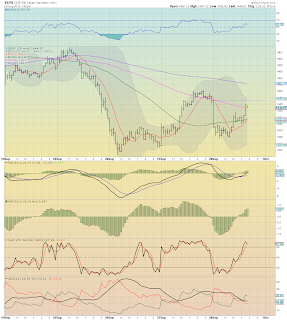 Once again, the opening declines of sp'10pts are just not enough to counteract each subsequent rally..as has been the case since early June.

The above 60min H/S theory is just something I am keeping in mind. Bears need a simple close <1437 - which seems implausible today.  A close over 1450..and that chart that gets wiped.

With the Spanish bank stress tests suggesting they 'only need 60bn Euro', the market spiked higher, doubtless stopping out a fair few of the bears. 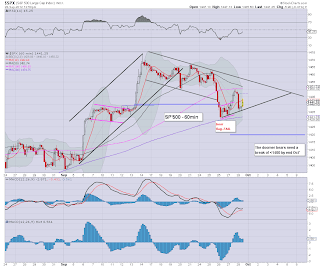 Clearly, we have a lower channel/trend to break, which by the close of today will be 1437. Anything under 1435 would be arguably a clear break, and again..open the 1420s up for Monday morning.
--

Q. Any one know why the FB trash is up 7% today? Other than a short-cascade up, its laughable, and just looks an easy short for late Oct/November. Target remains $15, then 12/10 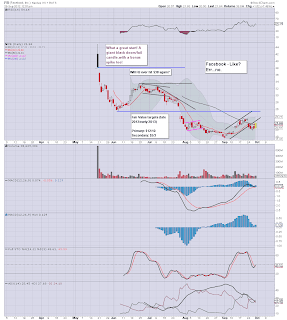 This mornings Chicago <50' PMI figure was yet another signal that the US is probably now in recession. As ever though, it won't be until late next April or even July 2013 that the mainstream will officially recognise it as such. By that time, a lot will have happened to the western world.

As for the crazy market, today is an interesting reversal from yesterdays utter madness. The bears really need a close below the Wednesday 1430 low. That would certainly help start October in the right manner. 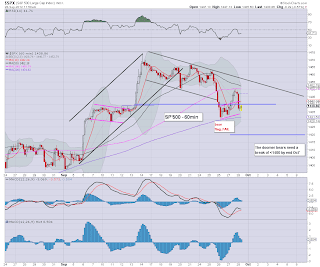 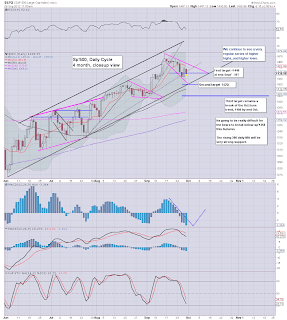 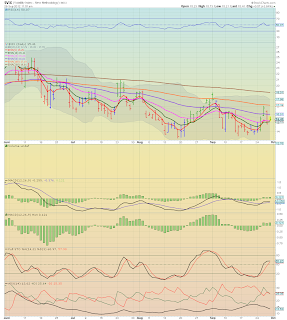 The hourly cycle is a little concerning, after all, we appear to be putting in a higher low in price terms. The one thing bears have going for them is the MACD which still offers downside into the 1420s.

The VIX daily rainbow chart, a green candle - an inside day so far, its certainly not super bearish for Monday, but its something for those who plan to hold short across the weekend. VIX target remains a brief higher spike to 18/19.

As things are, I see zero chance of a break below the important 1397 low, that is still probably some weeks away - and that's even if we assume 1474 was the peak, which for now, is the great unknown.

I remain short, and still seeking what seems a logical exit around 1425/20.

back at 2pm
Posted by Trading Sunset at 16:57:00
Email ThisBlogThis!Share to TwitterShare to FacebookShare to Pinterest


back at 12pm, when maybe I'll have something semi-coherent to say.