The world indexes were warning of weakness as early as January. We have seen decisive turns lower across all major world indexes since April, with May showing some severe downside. The months ahead look very bearish. 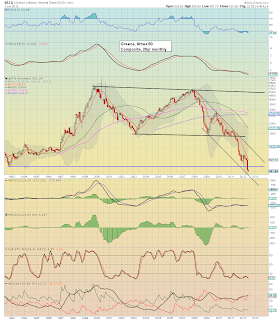 The basket case of Greece is now down around 90% from its 2007/8 peak. A currency collapse/system-reboot, will probably knock a further 7-9% from what remains. So..this index will probably fall below 100 within a year or so. It is a great example of 'what happens to the stock market when the country collapses'. 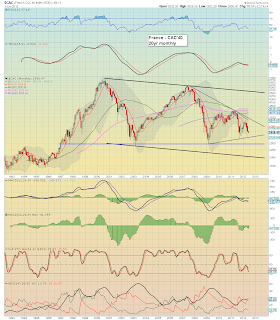 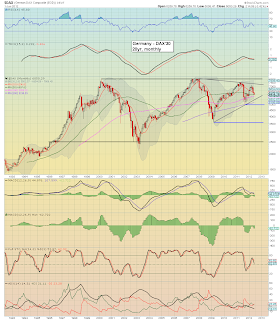 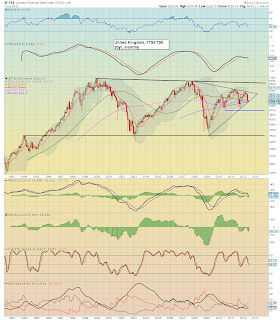 The debt-mountain that is the UK, is also showing a clear rollover, and we're set to break the next key level of 5200, which opens up 4750. A move as low as 3500 seems very possible if the central bankers decide not to print enough to counter the deflationary wave now underway. 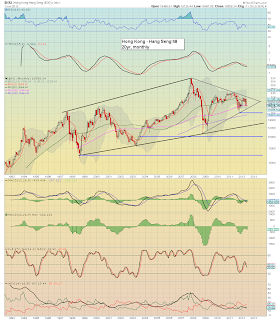 One of the strongest markets out there, but again, we have a clear rollover. 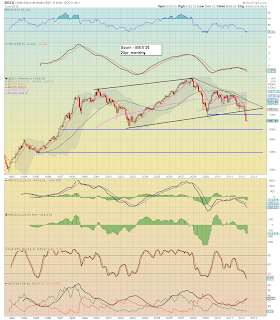 Spain is the next basket case EU state that is directly following in the footsteps of Greece. With the break of 7k - I immediately declared 5k is coming...so far we're halfway there. If 5k..fails...then a further 40% to go. Considering the dire economy of Spain with systemic collapse possible at any time, I'm guessing 5k will FAIL to hold. It looks like the IBEX will be 90% down..within the next few years. 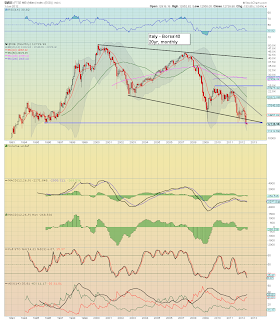 Slightly further behind than Spain on the road to hell, follows the Italian index. Arguably, the current break of 13k, opens the door to a natural move to the big 10,000 level - so there is probably at least 27% to go. Despite the delusion that is usually endemic in the twisted US markets, even the mighty Dow has rolled over. First target remains 11k. Arguably, a break into the 10750/500 range...would lead to a new target low of 7500/8000 within a few months. 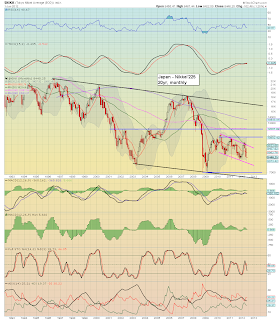 The Japanese market had been trying to put in a bullish flag, but its failing too. It remains an ugly market..one that has been in terminal decline for over 20 years. A move to new lows of 6500 seems very possible late 2012/ early 2013. 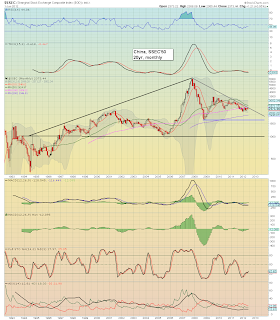 China remains strangely stable compared to other world markets (are the communistic overlords meddling even more than the US PPT/Bernanke?). Considering the wider 'will China soft land?'  economic concerns, a move down to 1750 seems very viable - that's around 20%. A deflationary/housing collapse wave would likely take this market back to the ultimate psychological support level of 1000.

World indexes lost almost 3% on Friday alone (see VEU chart below). May was an ugly month, and June is already off to a bearish start. I'm guessing we see some further losses next week, but some kind of multi-week bounce into late June. July/August will be critical in whether we see the Bernanke (and other central bankers) initiate big enough QE to fight off a deflationary collapse wave.

I'm guessing they will leave it too late, and besides, the track record of the bankers is always reactionary, rather than peremptory. I have other thoughts on the wider macro-economic situation, but I'll leave that for another day. Suffice to say...the notion the USA is somehow immune to the ongoing recession in Japan, the EU/UK..its nonsense. The USA will weaken as the year progresses. 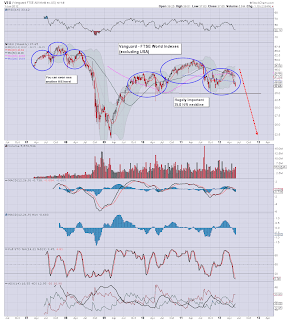 Deflationary collapse...is it 2008 all over again?

The VEU chart is warning exactly of such an issue. We have the exact same style of chart pattern, only the scale in price/time is different. A break under 35.0 will be the last warning the permabulls get.

For the US markets, a break under 35, would probably mean Dow 8k, Sp'800s, with VIX 60+. In terms of time, such low levels would probably occur no later than October of this year.

More on Sunday.
Posted by Trading Sunset at 20:00:00
Email ThisBlogThis!Share to TwitterShare to FacebookShare to Pinterest

Oil - a break under $80 is a collapse wave red flag

Oil had a really rough week, losing around $7.50 (8.25%) to close at $83. I've been watching Oil for some months now, wondering if it can break the lower channel/wedge line, and we're just about on the edge.

A break for WTIC under $80 in my view is a clear warning. A warning of a deflationary collapse wave - in the style of the 2008 wide asset class sell off. 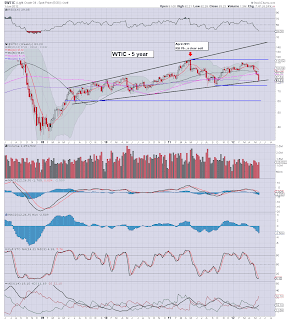 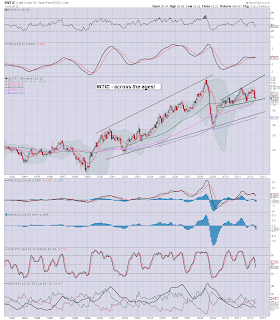 A break of WTIC under $80 in my view would lead to immediate targets of $60..possibly as low as $50 by late 2012. That would indeed be suggestive of a very strong deflationary wave across the world.

My best guess would be that it would equates to the sp' failing to hold the lower monthly wedge/channel line of 1100, with a decisive break under 1000. A 'panic' selling wave could easily drive the sp' into the low 900s, even 800s.

Oil might get a little bounce off $80 - with sp' flooring around 1260/50 early next week (with VIX 29/31). Yet in the weeks ahead, I strongly believe WTIC will fail to hold over $80, and I will re-state those targets listed earlier.
--
It has been a long week (kinda ironic considering the holiday Monday), I hope some of my charts and meandering comments have been 'useful' to some of you..Support the site..tell your other trader friends!

Goodnight from London....have a good weekend
Posted by Trading Sunset at 04:00:00
Email ThisBlogThis!Share to TwitterShare to FacebookShare to Pinterest

A very bearish end to the week. Tuesday's major ramp was indeed merely a backtest against broken support - something I wasn't watching closely enough, but others (Albertarocks - see chartists) were. The style of today's close is certainly warning of much lower levels next week, but we could easily see a brief bounce early Monday. A quick retracement to 1295/1300 is still very viable, especially if some stupid nonsense rumour appears over the weekend.

Lets take a look at those doomy gloomy daily indexes! 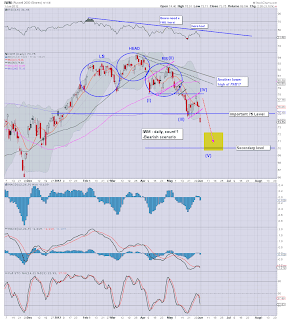 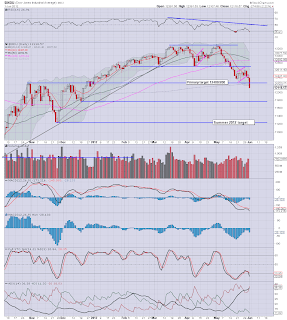 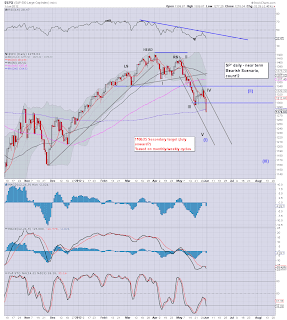 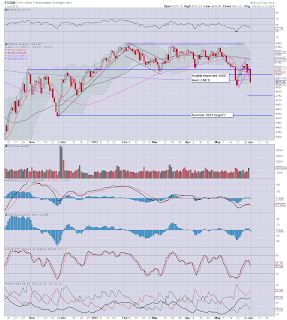 The Transports were the clearest index this week, putting in a perfect little up wave...forming a bear flag...and it was the first to break under the flag yesterday. Today's move confirms the bigger cycle charts, and the tranny could in theory fall all the way to 3500 this year (doom scenario).

I'm very pleased with the bearish outlook charts, IWM to 70 seems a given, and SP'1225 now looks very viable by the end of next week.

The bigger cycle charts are even more clear..we're going to sp'1100 in the next month or so. If we can hold that level - and if the Bernanke makes an appearance..we'll see a mega rally into 2013.

The 'ten world indexes', which remain the most important regular chart update I provide. The world indexes were warning of trouble since January..and its all coming to pass.