With the main indexes managing to close the week with moderate gains, the VIX slipped lower into the weekend, closing -3% @ 13.57. On a weekly basis, the VIX climbed a rather impressive 20%, but then it started from last weeks bizarrely low close of 11.30. 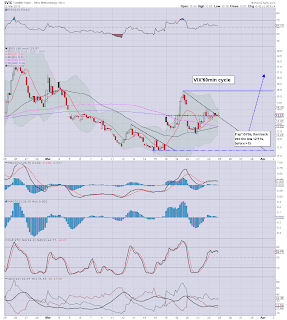 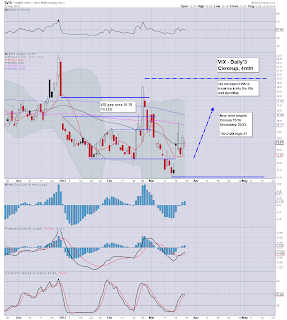 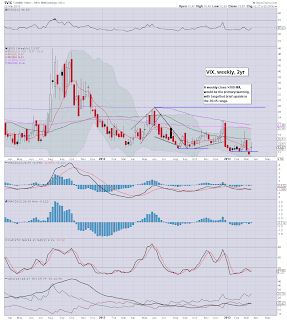 First, dealing with the very near term. If my index count/outlook is correct, and we see the sp'1570s next week, then I'd expect VIX to briefly slip back into the 11s.

We are seeing some interesting little upside spikes in recent weeks, but so far...none of them are able to hold.


The next big VIX wave?

Equity doomer bears should be seeking a weekly VIX close above the 200 weekly MA, currently @ 21.46, but frankly, that looks extremely difficult any time soon.

Indeed, even if the main market declines to the sp'1470s - which is my baseline primary target for April/May, its possible we might only see the VIX max out at the key 20 threshold.

Considering the QE-POMO is set to continue for at least another few months, its going to be difficult to see any sustained multi-week ramp in the VIX.

Last summers VIX high in the 27s sure seems a long way up...and historically speaking, even VIX in the upper 20s is nothing to get excited about.

A little more later..on the indexes.
Posted by Trading Sunset at 22:00:00
Email ThisBlogThis!Share to TwitterShare to FacebookShare to Pinterest

The market closed the weak with moderate gains of around 0.5%, with the VIX slipping a little in the high 13s. USD fell 0.4%, and that probably helped Oil which rose 1.5%. The precious metals struggled to rally from an opening gap lower. 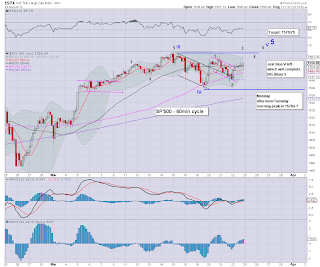 Another week comes to a close! Those bears seeking a major new down cycle clearly are going to have to wait yet another week.

If the micro-count is correct, the US markets have a significant chance of upside across Mon/Tuesday, with a spike high in the sp'1570s.

*a few bits and pieces to wrap up the week across the evening.

Have a good weekend
Posted by Trading Sunset at 20:01:00
Email ThisBlogThis!Share to TwitterShare to FacebookShare to Pinterest

The market is holding moderate gains of 0.6%, with the VIX -3%. There is no real sign of the bears today, its turned out to be something of a quiet day. Market could still melt higher into the low 1560s by the close, but the bulls really only need to hold the 1550s. 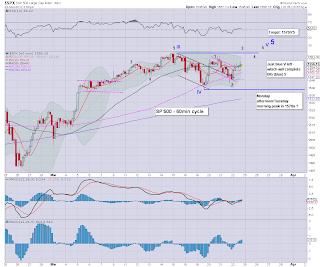 There is nothing to suggest we'll rollover and close red by the close.

Yes, there is the uncertainty of the Cyprus issue across this weekend, but on balance, they will likely come to some sort of compromise..which would be just the excuse the market will use to jump into the 1570s on Mon/Tuesday.

back after the close.
Posted by Trading Sunset at 18:51:00
Email ThisBlogThis!Share to TwitterShare to FacebookShare to Pinterest

With no scary Cypriot news (at least so far) today, the market is battling higher, and it looks like it has a fair chance of closing in the low 1560s, just a touch shy of the 1563 high. VIX remains a touch lower. Oil is a little higher, whilst the metals are still trying to build a floor. 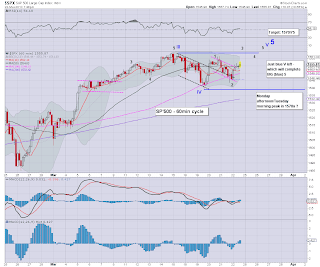 Not much to add, except to note it sure doesn't look like the bears are going to be able to close this market red.

AAPL is trying to close the week above key resistance 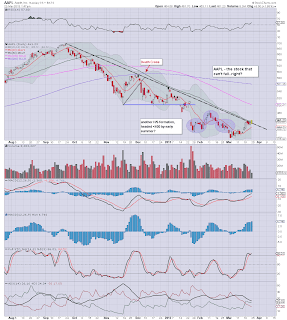 --
*I remain holding an SLV long position, might hold over the weekend...hourly charts offer significant upside into the 28.50s next week.
Posted by Trading Sunset at 17:49:00
Email ThisBlogThis!Share to TwitterShare to FacebookShare to Pinterest

Despite the weakness this week, the market looks comfortably capable of closing the week in the sp'1550s. USD is starting to slip lower, Oil is holding moderate gains, whilst the precious metals are still trying to form a solid floor. 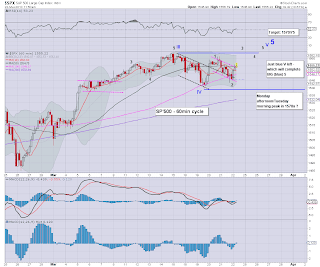 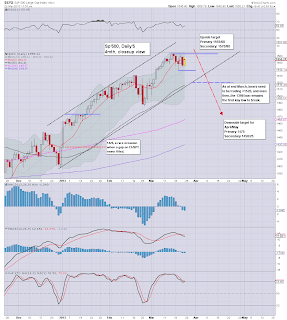 Near term trend looks upward. Whether we close in the 1560s I don't think matters for the bulls. Anything in the 1550s will be enough to keep the door open to a brief spike high in the 1570s next week.

VIX looks weak, I'd be surprised if it closes green.


back at 2pm
Posted by Trading Sunset at 15:52:00
Email ThisBlogThis!Share to TwitterShare to FacebookShare to Pinterest

11am update - holding onto gains

The market is holding onto moderate gains, and the bulls look pretty comfortable in the sp'1550s. The hourly charts are suggesting the 1563 high could be broken today, with the 1570s on Mon/Tue. VIX looks especially weak, -3% so far 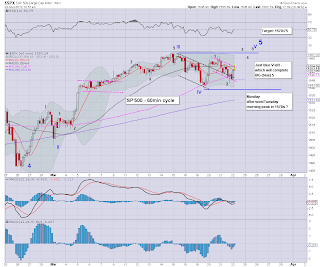 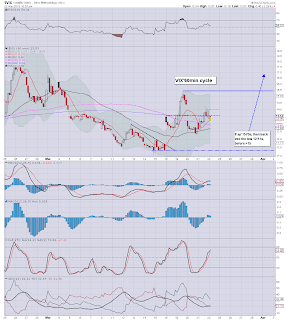 Interesting morning, certainly the bears are completely failing to see any follow through after yesterdays weak closing hour.

From a count perspective, I'd expect this sub'3 to continue higher all the way into the close.

No doubt, that would really annoy those bears who were shorting into recent declines.

10am update - climbing into the weekend

The main market is opening higher. The gains are certainly only moderate, but the bulls only need to consolidate sideways for a few hours, and then melt slowly upward into the weekend. Oil is higher, precious metals open significantly lower, but recovering. USD a touch lower. 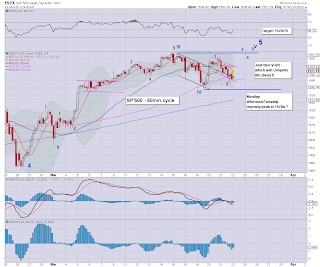 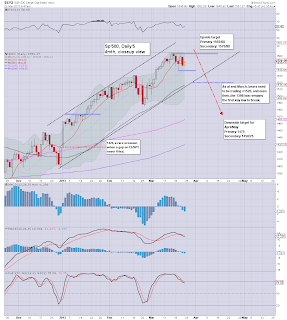 So, we're opening somewhat higher, back into those 1550s. Frankly, the bulls really only need to hold the low 1550s for the close, and that would at least still easily open up the 1570s for Mon/Tuesday.

Unless some news update from Cyprus upsets the market, we ain't going lower today, certainly the 1538 low should hold.
--

*I exited USO (long Oil) at the open 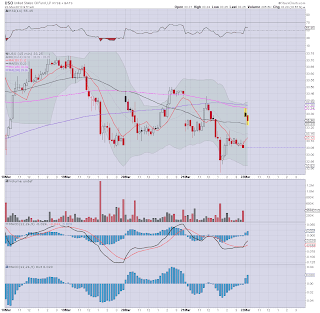 The opening black candle on the 15min, not exactly the most bullish of starts, I'm out of that. Could certainly go a lot higher by the close, although I won't be meddling with it again today. 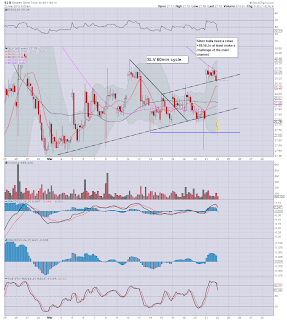 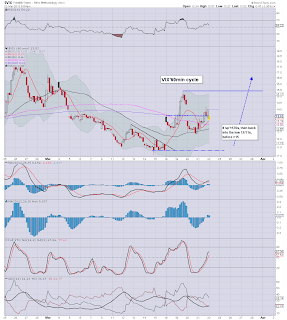 VIX hourly is offering a reversal candle, but unlike SLV, I don't much trust this one. VIX could easily close in the low 12s, even the 11s if the market can ramp into the weekend at a new high >1563.
Posted by Trading Sunset at 13:48:00
Email ThisBlogThis!Share to TwitterShare to FacebookShare to Pinterest

A weak day for US equities, but there remains the significant chance of the market briefly trading in the sp'1570s. However, if at any point we break the recent low of sp'1538, then it would seem the top is actually already in. 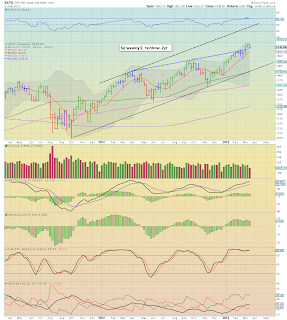 We've seen 5 little waves from the November low - forming one very significant larger wave. The only issue is whether we see a brief spike into the sp'1570s..before this wave is conclusively done.

Bears should be seeking a weekly close under the 10MA of sp'1523, but that looks somewhat difficult. Bulls really only need to close tomorrow in the 1550s, and that would easily allows for a spike top in the 1570s early next week.
-- 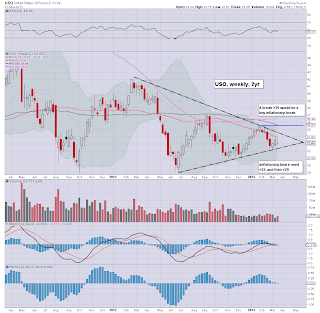 It makes for an easy 'chase it' higher/lower situation, and stop levels are also very straight forward with the current price action.

Considering the QE-Pomo action is continuing, I'm more inclined (if reluctantly) to assume that Oil will break to the upside. However, Dr Copper - equally important, has this week broken to the downside! 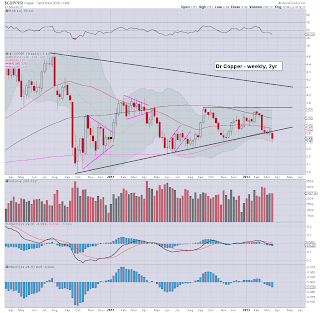 I'll most definitely keep referring back to Oil and Copper in the weeks and months ahead. They could be key to discerning whether the equity market is going to get smashed later this year.
--
*I am long USO, seeking an exit before the weekend, in the 33.50s.
--

There is no US econ data due this Friday, which itself will probably be filled with more Cypriot news updates. We could see some real choppy action across the day. The daily charts are suggestive of 'weakness' into the weekend, although the hourly charts are already moderately oversold. Those bulls who are heavy long right now, should have good stops, somewhere in the sp'1540/30s.

As I always tend to say...how we close the week..will be important!

The US market closed broadly lower, with declines of around 0.9%. The transports particularly suffered, -1.6%, making the fifth consecutive daily decline - the longest down cycle since late Dec. Primary trend is looking weak, and key rising support for most indexes is not far away. 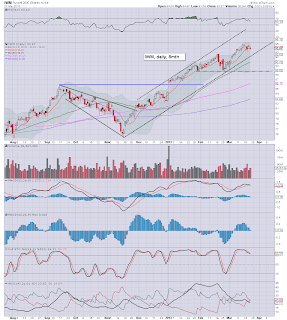 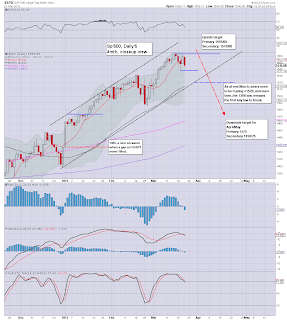 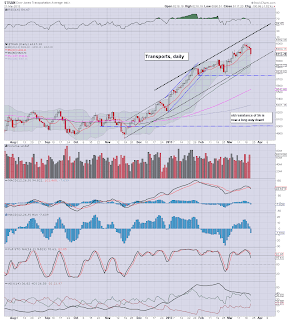 So, almost 1% lower for most indexes, not too significant, but it should be something to concern the bulls.

Is the top of this multi-month cycle already in? My hourly chart (see earlier post) is still looking for a few more days higher. I still think there is very real risk of a final little blow off rally into the sp'1570s.

Of course, the Cyprus issue is what is largely causing the current weakness, but if that can 'somehow' be resolved (at least temporarily), then this market will probably break new highs.

Underlying MACD (blue bar histogram) cycle is now negative cycle on most indexes. The bears are trying to wrestle back control of the market, but..we are still within what remains a very strong upward channel.