With the main equity indexes in algo bot melt mode, the VIX struggled to climb more than 4-5% in the morning, and simply melted back lower into the close, settling +1.7% @ 13.31. There is the small risk of a VIX spike after the FOMC announcement this Wednesday afternoon. 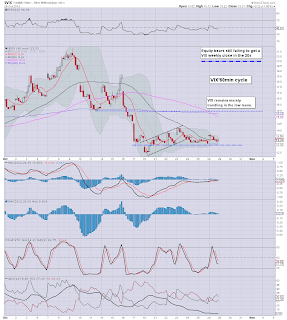 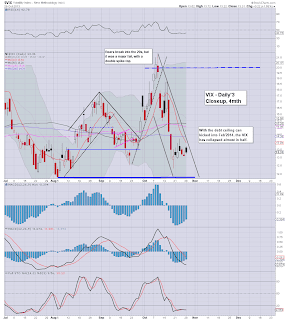 There is very little to add.. VIX remains low, and even if the market decides to sell off post-FOMC, the VIX will struggle just to break into the 15/16s.

Right now, the notion of VIX in the 20s..just looks entirely implausible.
- 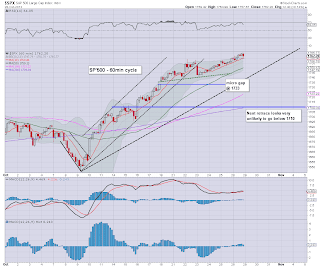 There really isn't much to say.

A simple day of algo-bot upward melt, fuelled by $5bn of QE.

There is little reason why Tuesday will be any different.

--
more later..on the VIX (not that much is happening in that either).
Posted by Trading Sunset at 20:02:00
Email ThisBlogThis!Share to TwitterShare to FacebookShare to Pinterest

A classic day of algo-bot melt..fuelled by $5bn of QE. There aren't any sellers, just a few buyers, but its more than enough to push the indexes to new highs. Metals and Oil are both holding moderate gains, with the VIX likely to be kicked fractionally lower into the close. 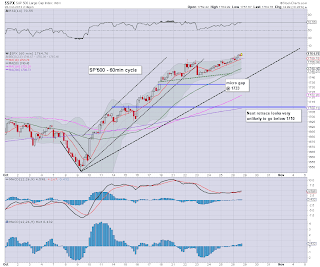 *eyes on AAPL earnings at the close, could be interesting.
--

Certainly a quiet day, and zero reason to expect the market to slip significantly lower until the FOMC is out of the way.

Further gains into the sp'1780s would obviously annoy all those shorts getting involved right now.

I don't get why anyone would short anything at present, it simply doesn't make any sense whilst the bigger weekly/monthly cycles are outright bullish.
- 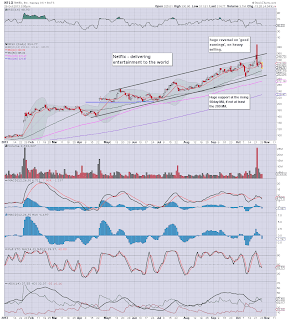 $300 level looks viable, regardless of further gains in the main market.
Posted by Trading Sunset at 18:50:00
Email ThisBlogThis!Share to TwitterShare to FacebookShare to Pinterest

The daily index charts are offering a brief spike into the sp'1780s this week. The issue then, can the bears achieve another Fed day reversal like this past May, on the order of 1780s, and closing in the 1750s? Regardless, it will be difficult, whilst the weekly/monthly charts are pushing higher. 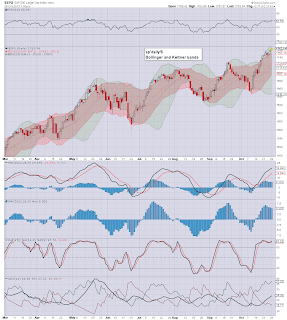 Certainly, there is some similarity in the current price action to May. I sure won't be getting involved though. Tired of it....way ....way.....tired.
-

*AAPL earnings at the close... 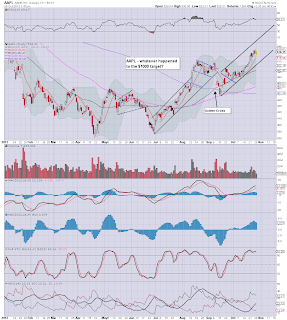 Market remains in classic algo-bot melt mode. There is near zero sell side volume, a few buyers, and no doubt, a few shorts are covering across the trading day. With the daily and weekly upper bollinger' offering sp'1770 and 1780 respectively...bulls still have upside into the FOMC this Wednesday. 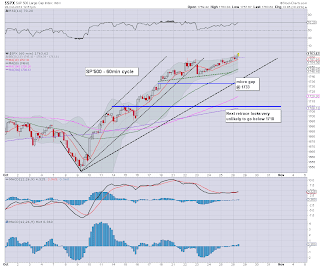 Little to add..its simply the same old nonsense that we've seen a thousand times before.
-

CNX, which clown TV was talking about all morning. The 'Cramer' effect..possibly accounts for today's candle.... 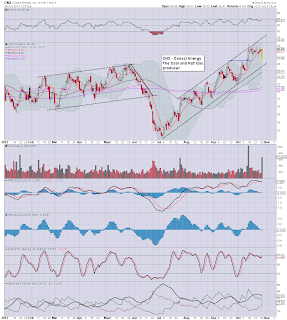 It remains one of the better coal miners out there, but then...hardly any of them can turn a profit, so its not saying much.
--

AAPL.. ahead of earnings... 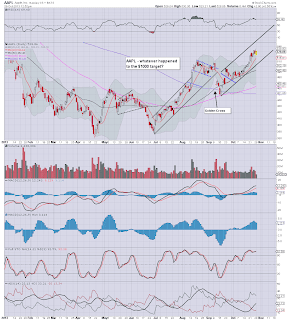 A $20/30 AH ramp looks...probable. Relative to the main market, it remains bizarrely under-valued.
Posted by Trading Sunset at 16:54:00
Email ThisBlogThis!Share to TwitterShare to FacebookShare to Pinterest

The market remains in a very quiet mood. Earnings are coming in 'reasonable', and there is seemingly nothing (other than profit taking) for the bulls to be concerned about. All primary cycles are outright bullish, and the sp'1800s look viable by mid-November. 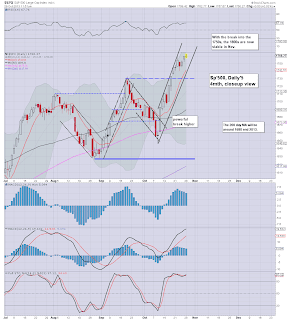 With a very large QE of around $5bn today, equity bulls once again have it all their way.
-

Utterly pointless on the short side. Even those hoping for a post-FOMC sell off, will be lucky to see 2-3% retrace, and even then..why would we?

Far from threat of QE being reduced, there is actually increasing talk of it being raised. Housing data wasn't exactly inspiring today.
Posted by Trading Sunset at 15:54:00
Email ThisBlogThis!Share to TwitterShare to FacebookShare to Pinterest

11am update - eyes on the transports

The old leader - Transports, continues to lead the way. The 7200/7300s look viable within the next few weeks, and that should offer the equity bears the first reasonable index short level. Trans 7200 should equate to sp'1790/1810. 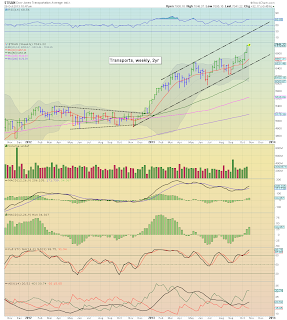 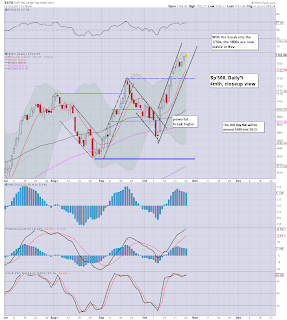 *further to note, the daily upper bol' on the sp' is now offering the 1780s in the immediate term.

Perhaps a spike on FOMC Wednesday to 1775/85 zone, before a few percent retracement?
-

Broader trend remains clearly to the upside.
Posted by Trading Sunset at 14:50:00
Email ThisBlogThis!Share to TwitterShare to FacebookShare to Pinterest

10am update - awaiting some algo-bot melt

The market opens somewhat muted, but we have already broken into the sp'1760s. There is little reason why we can't close in the 1760s today, and push into the 1770s by Wednesday. Certainly, we're over-stretched, but with near zero sell side volume, equity bulls are in control. 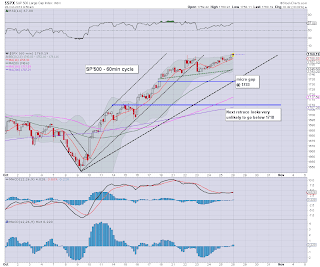 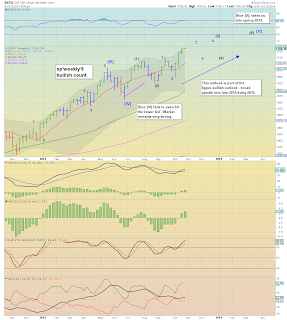 *I've added a weekly chart, if only to note the upper bollinger, now offering the 1770s.

At current upward rate, sp'1800s will be 'difficult' until mid November, but hey, that's only 3 weeks out.
-

APPL earnings at the close, so...a long day ahead.
Posted by Trading Sunset at 13:52:00
Email ThisBlogThis!Share to TwitterShare to FacebookShare to Pinterest 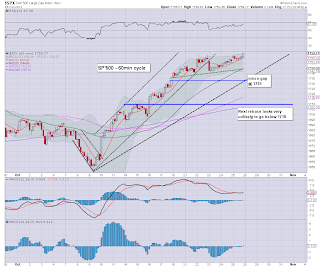 I'm guessing at least a few more weeks 'battling higher'. The sp'1800s do look likely, but we'll probably get stuck somewhere in the 1810/30 zone, before some kind of 3-5% retracement.

With QE set to continue ALL the way into late spring, I see no reason why this nonsense won't be trading in the sp'2000s.
--

*London city is clearing up after a rather stormy early morning. Some damage (if limited) in most places, even from my own window! The UK clocks have changed, and that will be annoying for this week, as all my EST times will need to be adjusted by an hour!
--

Interesting how Oscar is now the first (that I know of) in the mainstream to be touting the sp'2000s in the current multi-year cycle. Even if the market gets whacked 20% next year (for whatever reason), sp'2500 looks pretty easy to hit by late 2015.

Anyway...one day at a time....and this week will of course be all about the FOMC this Wednesday.
Posted by Trading Sunset at 12:12:00
Email ThisBlogThis!Share to TwitterShare to FacebookShare to Pinterest
Newer Posts Older Posts Home
Subscribe to: Posts (Atom)