With the breaks of the November up channel and the key low of sp'1598, the bears are finally in control of the US market (if only for a few weeks). Near term downside remains the lower weekly bollinger band, which by mid-July will have risen to the sp'1530s 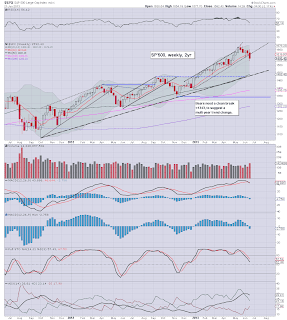 Underlying MACD (blue bar histogram) is negative for the first time since last December. The bears are now fully in control, and look set for a hit of the lower weekly bollinger band - currently 1488..and rising. At the very least, even if the current down cycle drags out for another 3-5 weeks, we should almost certainly see 1530s - the April (1536) low. 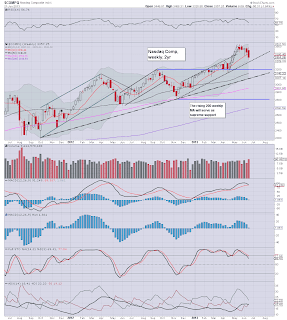 The Nasdaq lost almost 2% in the past week, and is similarly now on the slide. Its important to note that it remains within the November rally channel. Underlying MACD cycle is set to go negative at the Monday open. Downside target for the composite is 3100. That seems very viable within the next few weeks. 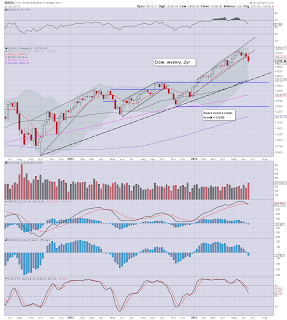 After almost eight months straight up, the Dow has finally broken the up channel. The decline of 1.8% isn't much, but its a good weekly close for the bears. The obvious downside target is 14k, and if we rally 1.5/2.0% next Mon/Tuesday, then the downside is a good 1000pts.

Underlying MACD cycle is now negative for the first time since last December, and we will probably cycle lower for another 3-5 weeks. 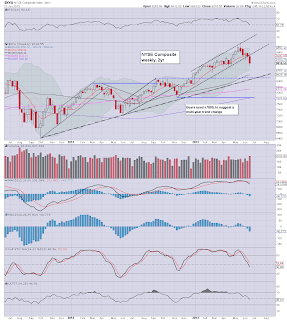 The master index slipped 2.6% this week, and the MACD cycle is now in its third week in negative territory. Key downside target is 8500, that's another 5/6% lower. 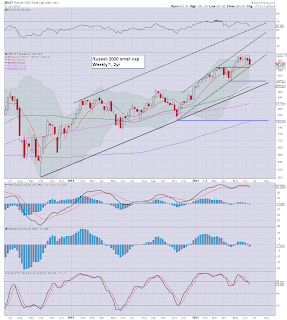 The Rus'2000 declined in line with other indexes, slipping 1.8%. However, it remains within the November up channel. Bears need to see a break <950 next week, and that will open up the prime target of 900.

It should be noted, it would seem VERY difficult for the bears to break the big 900 level in the current multi-week down cycle. On any basis, the 910/905 zone will be the place where more conservative bears will start to exit short positions. 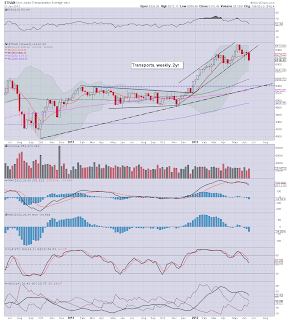 The transports lead the way up, and it continues to lead the way down. The weekly decline of 3.1% was significant, and primary downside target is 5800, that's around 3% lower. However, the tranny could easily fall to the 50 week MA in the low 5600s - which would equate to sp'1500/Dow'14k.

The break of the November up channel makes things very clear now. Sp'1687 was a key high, and we're very likely going to get real close (if not hit) the lower weekly bollinger band.

With the VIX breaking into the 20s - for the first time since last December, the bears have a number of great confirmatory signals this week. 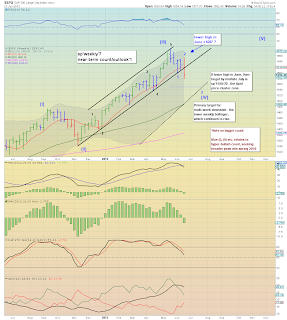 With the break of the down channel, the above count/outlook is what I am now following/trading. I'm still guessing we get at least another wave (5) off the low 1500s - beginning sometime in July. Whether that wave breaks a new high, or truncates <1687, is really too hard to guess right now.

Regardless, what is paramount, we have a channel break, and I'm looking for a hit on that rising lower bollinger band.

There isn't any data of importance on Monday, but there is something for the market each day for the rest of the week. Tuesday has Durable Goods orders, Wednesday has the third GDP, Thursday has personal income/outlays, and there is the PMI number on Friday.

*There is QE-pomo every day next week, significant QE is on Mon', Wed', and a large 4-5bn on Thursday.

I am entirely on the sidelines across the weekend, and will be seeking a full index-short early next week. 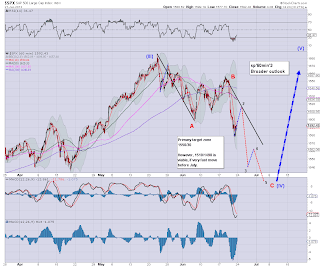 With the extra drop on Friday, perhaps we won't manage to claw into the 1620s. We'll just have to see what the bulls can manage on Mon/Tuesday. I certainly think 1610/15 is viable before the next severe wave lower. At a minimum, I'll be shorting this nonsense down to the 1530s.

It was a good week for the bears, next week (in theory) should be equally, if not even better.

back on Monday
Posted by Trading Sunset at 17:52:00
Email ThisBlogThis!Share to TwitterShare to FacebookShare to Pinterest

The Bernanke 'reversal day' high of sp'1687 of May'22, is now looking a long way up. With the market breaking to 1577 this morning, the monthly charts are increasingly showing initial signs of a rollover. First downside target is the (still rising) 10MA, currently @ sp'1509. 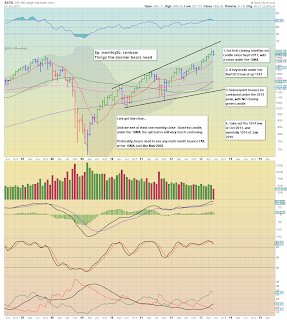 Well, its been a good week. I thought I would end the week with a single monthly 'rainbow' chart.

We currently have a blue candle, with the MACD (green bar histogram) starting to tick lower. Certainly, its nothing for the bears to get overly excited about yet, but its the first moderate sign of weakness that we've seen since last December.

Weekly charts are also supportive of a sp'1510 hit...viable within the next two weeks.

If we close next week in the low 1500s, then we might actually get our first red candle since Sept'2011, and that would really be something the bears sorely need :)

*next main posting, late Saturday, on the US weekly index cycles.
Posted by Trading Sunset at 04:00:00
Email ThisBlogThis!Share to TwitterShare to FacebookShare to Pinterest

The market broke to new lows in late morning, but despite some classic opex chop, the indexes closed moderately higher. The sp' close of 1591 was a good 14pts above the earlier low, and the hourly charts are supportive of further upside on Monday, perhaps into the 1620s. 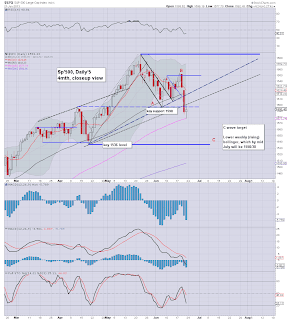 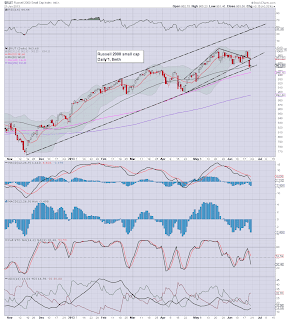 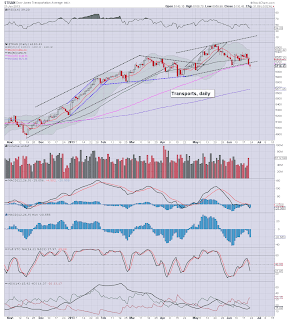 Today was a rather classic opex. Opening minor index gains failed to hold, and across two hours, the sp' swung from 1599 to 1577, which no doubt really spooked a fair few bulls.

With the smaller 15/60min cycles floored, it was no surprise to then see what became quite a significant latter day recovery, although certainly, the gains were choppy.
--

Near term price action looks bullish for Monday, and a move into the 1620s looks very viable, before the next wave lower.

If the count/outlook is correct, then we should see a rather severe down wave later next week, perhaps as low as 1550/30s, which would probably equate to VIX in the 25/27 area.