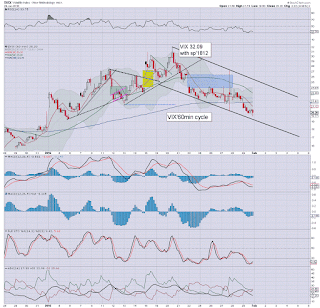 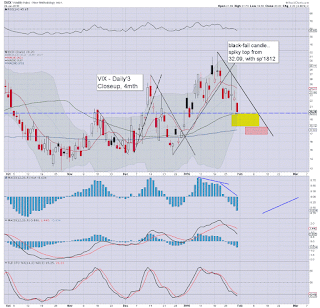 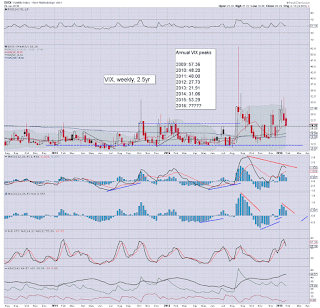 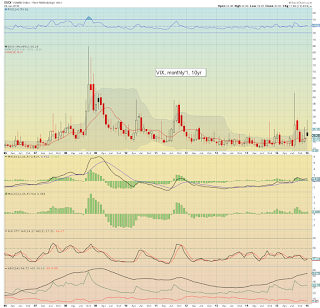 Suffice to add, as equities continue a counter rally from the sp'1812 low, the VIX is naturally broadly cooling.

With a closing hour intra low of 19.50, the 18s look probable if sp'1960/70s. I do not expect sustained action in the mid/low teens until late summer at the earliest.

US equity indexes end the week and month on a rather positive note, sp +46pts @ 1940. The two leaders - Trans/R2K, settled higher by 3.0% and 3.2% respectively. Near term outlook continues to offer the 1940/70 zone... before the high probability of a crash wave in March. 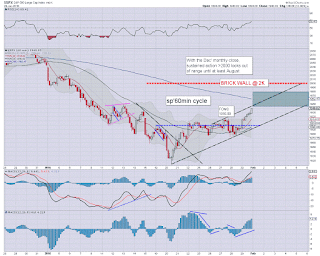 .. and I thought the 1920s were a bold target for the Friday close yesterday morning.


So.. another week comes to a close... one that has probably confused and annoyed many.

For me.. as I said across the week, the weekly cycles did not favour the bears. I've never seen a new down wave begin from such a technical setup.

As things are, I think its possible I could start launching market shorts in about 7-8 trading days.

*the usual bits and pieces across the evening to wrap up the week... and month.
Posted by Trading Sunset at 21:01:00
Email ThisBlogThis!Share to TwitterShare to FacebookShare to Pinterest

After a great number of swings and tedious price chop, US equity indexes are set for the second consecutive net weekly gain, with the sp'500 due a close within the 1925/35 zone. The 1940s look an easy target for next week, with the 1970s more viable in the week of Feb'8th. 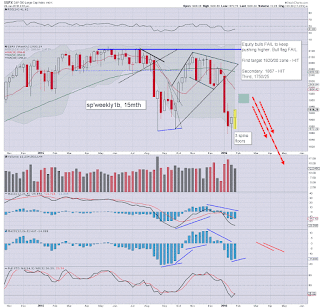 Well, its been a tough week.

Many have been lost in the minor noise.. with the market eventually breaking to the upside, from which did indeed turn out to be a 5 day bull flag.

Today's gains sure are helping calm the cheerleaders on clown finance TV.

I look forward to seeing the faces of horror and dismay this spring. No doubt they will be screaming for Yellen to launch QE4 and follow the ECB and BoJ with... NIRP.

--
The following sums up this week... and arguably... the year ahead


A fierce battle is ahead, not all will make it through to the end of this year. I'll give it a damn good try.

back at the close
Posted by Trading Sunset at 19:53:00
Email ThisBlogThis!Share to TwitterShare to FacebookShare to Pinterest

US equities continue to build rather significant gains, with the weekly candle now looking very definitive, and giving clarity that the sp'1940/70 zone will be hit in first half of February. VIX continues to melt lower, now -9% in the 20.30s. 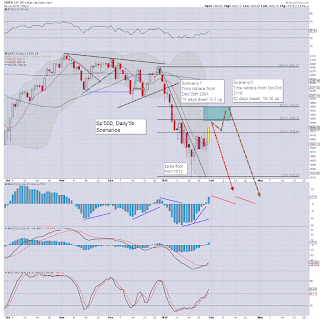 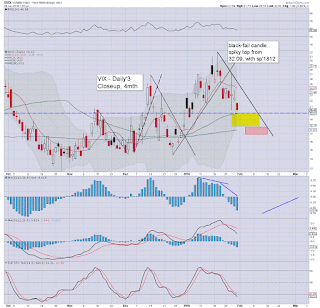 Naturally, I am already looking ahead, not just to next week, but even a few months beyond that.

The market has now battled upward by a very impressive 116pts (5.8%) since last Wednesday's low.

Clearly, we're over half way there in terms of a bounce/counter rally.

Yellen is speaking Feb' 10th and 11th.    Either of those days would make for an interesting top on the daily/weekly cycle.

yours... refining.
Posted by Trading Sunset at 18:53:00
Email ThisBlogThis!Share to TwitterShare to FacebookShare to Pinterest

An interesting call on clown finance TV from Mr Ross of Evercore, suggesting this month was analogous to Jan'2008. However, if one wants to invoke that analogy, the pattern would really suggest its July - reflecting the big bear flag (Aug-Dec'2015) that was confirmed by the very bearish January down wave. 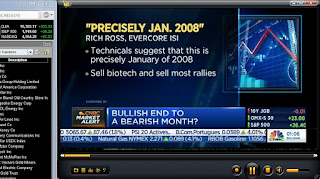 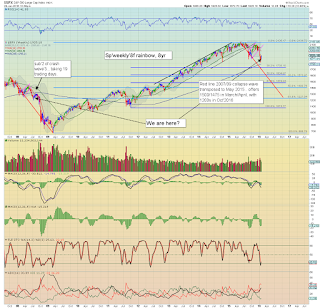 *Rick Ross of Evercore touted the 1700/1670 zone as a valid target in first half. It was interesting to hear him talk about how bankruptcies are to be expected... and that is something I continue to regularly highlight.

Annoyingly.. if it does occur, it'll be so fast as to catch almost everyone by surprise.

In theory... 3-5 blue candles - much like late July/August 2008.. and then renewed downside in late Feb/March.

Anyway.. its something to ponder on... for an hour.
Posted by Trading Sunset at 17:50:00
Email ThisBlogThis!Share to TwitterShare to FacebookShare to Pinterest

US equities have built significant gains, and there is now threat of a weekly close in the sp'1920s - which would make for a rather bullish weekly candle. VIX remains in cooling mode, -7% in the 20.80s. Oil is continuing to retrace, -2.6% in the $33s. 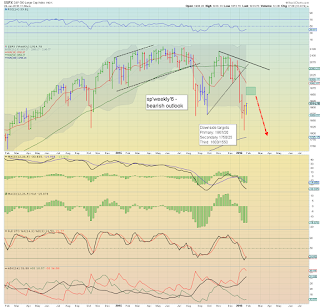 *note the MACD (green bar histogram), levelling out.. set to tick upward for a few weeks.
--

Suffice to add, the first blue candle.. and its highly indicative that the 1940/70 zone will be hit within the first half of February.

To me, the only issue is how many blue candles might we see before the next rollover. 3, 4, 5... it won't be that many before next down wave.

US equities break a new cycle high of sp'1918, although there are already signs of a little cooling. USD is showing some rather powerful strength to end the month, +1.2% in the DXY 99.70s. Metals are managing moderate gains, Gold +$4. Oil continues to remain volatile, swinging from +1% to -1%. 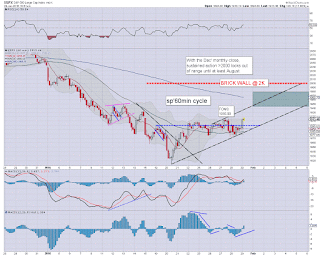 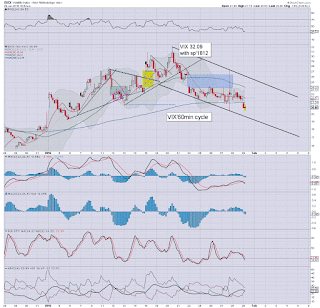 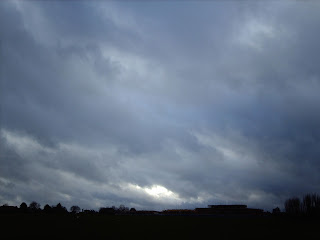 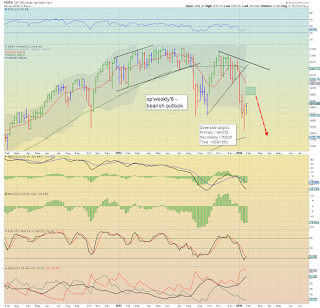 We have our first blue candle. We should get at least 2 more of these... maybe 4-5.. depending on how long it takes for the market to rollover into the spring for a probable crash wave.
Posted by Trading Sunset at 15:53:00
Email ThisBlogThis!Share to TwitterShare to FacebookShare to Pinterest

US equities open moderately higher, back over the sp'1900 threshold. Regardless of today's close, January is set to close net lower by around -6%. Metals are broadly flat, whilst Oil is battling to hold gains of around 1.0% in the $34s. 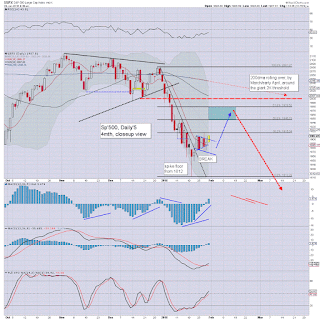 So.. we're set to end the month on a somewhat positive note, but for those with eyes on the bigger picture... January merely confirms what December was provisionally suggesting.

Note the upper bollinger on the daily equity cycle.... 2020s... Next week, that should be around 2K... and will make for another aspect of resistance across February. 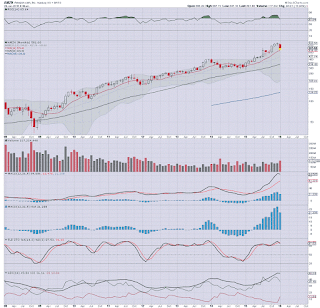 Seen on the bigger monthly cycle, we have one of the biggest net monthly declines. Underlying MACD (blue bar histogram) is rolling over. Assuming a down cycle into the spring, first target is the $400 threshold.... which is some 30% lower than current levels.

--
back at 11am
Posted by Trading Sunset at 14:50:00
Email ThisBlogThis!Share to TwitterShare to FacebookShare to Pinterest 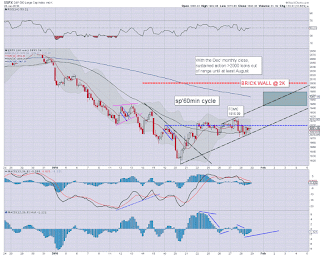 Even if the market closes today net higher by 20/30pts, it will still make for one of the most bearish January's ever.

*bulls need a Friday gain 13.6pts for a net weekly gain.. that is clearly possible.

Japan: very unstable session... but settling +2.8% @ 17518, after the BoJ decided NIRP will solve their underlying problem of too few babies.

It is extremely notable that ALL world markets are settling January with dire net monthly declines. I will cover that in depth this weekend.

8.31am. Q4 GDP q/q change:  +0.7%.... lousy. There is little good there for the macro bulls, and that number could (and often is) be revised fractionally negative in Feb/March

Equity bulls should be laughing at that one..
Posted by Trading Sunset at 12:51:00
Email ThisBlogThis!Share to TwitterShare to FacebookShare to Pinterest

Regardless of whether the market closes the week in the sp'1920s, 10s, or <1900, the January close will be a very bearish one, with a net decline of -6% to -8%. The Jan' close will fully confirm the bearish December close, with the sp'1600s probable this spring. 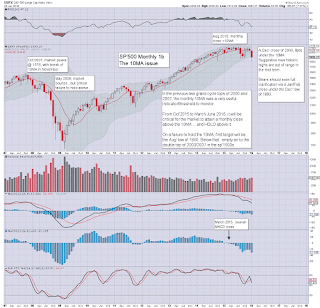 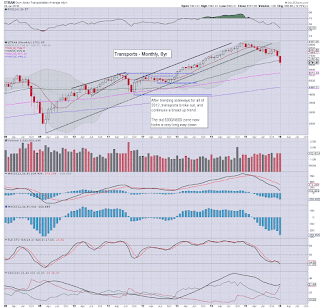 So.. regardless of how tomorrow closes, we're seeing important downside follow through.

At best, the equity bulls could make a play to test the monthly 10MA, but as of next Monday's open, that will probably have declined to around sp'2000.

Sustained action >2K looks out of range for many months.

Friday has a rather important set of econ-data points..

Q4 GDP. Market is expecting growth of around 1%. That is of course much lower than consensus from just a month ago.

Its possible - based on other data, that Q4 will come in fractionally negative. In any case... the US, and broader world economy continue to have building problems as a result of the ongoing collapse in commodities.
--

Other data: Chicago PMI, market is expecting 45.. which would still be well below the recessionary threshold of 50. Any print <50 should have everyone at least concerned. A print <40 should sound alarm bells.

*Fed official Williams is due to appear in the afternoon.
-- 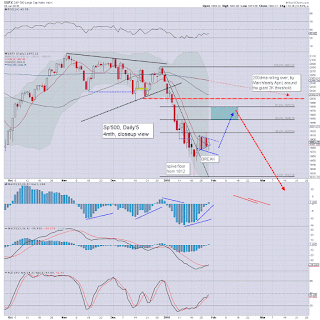 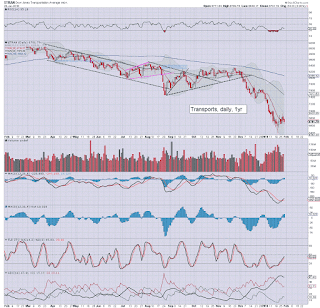 Suffice to add, price action sure is choppy, but we're comfortably above last weeks low of sp'1812.