With the indexes opening lower by around 1.5%, the VIX jumped 10%, and continued to climb for much of the morning. The break into the mid'19s was a very important sign of strength. The next natural target is the big 20 level, and the late July high of VIX'21. 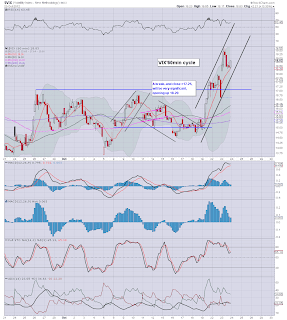 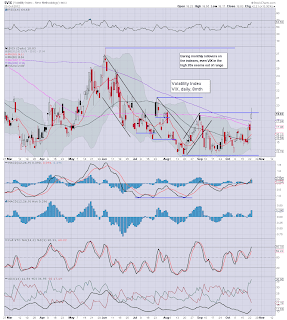 With the indexes putting in a pretty bearish display, the bears needed to see some confirmation, and they certainly saw it from the VIX which closed higher by 13% to close in the high 18s.

Today was a very important signal that volatility is coming back to the market, and that lower levels in the equity indexes are very likely.


Will the VIX explode later this week?

It is very difficult to say, but the potential is there. However, first I think we do need to see at least a significant 'higher low' put in, at least in the low 20s, before we could see anything in the 30s. If the weekly index cycle (lower target) of sp'1325 could be hit (within 1-3 weeks), I'd guess that would equate to a VIX around 27/30. It sure won't be easy to see anything over that.
--

Looking ahead into Wednesday. I'm guessing (or is it a hope?) we might see the indexes again open lower, and see the VIX get stuck at 20/21, before an intra-day pullback.

A bad day for the bulls, with a VERY important close below yesterdays closing hour spike. The VIX confirmed the significant declines. 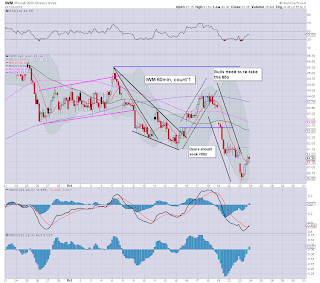 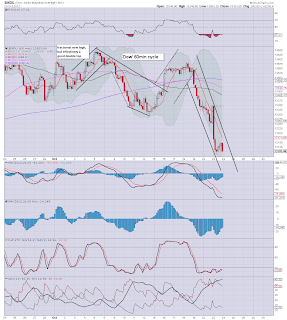 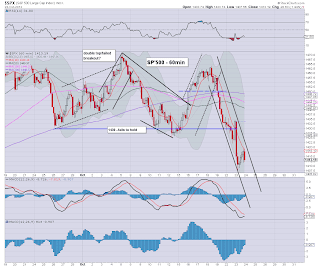 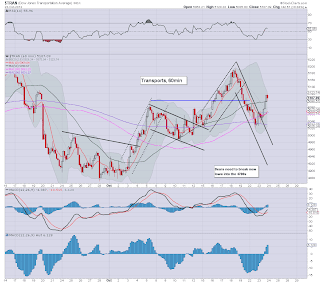 A good day in bear land, with a particularly weak close.
-
I am short, seeking 1400/1395 tomorrow..or no later than Thur/Friday.

More later.
Posted by Trading Sunset at 21:06:00
Email ThisBlogThis!Share to TwitterShare to FacebookShare to Pinterest

We're seeing some afternoon chop, and the indexes are still holding broadly onto much of their declines. VIX is weakening, and the hourly VIX cycle is warning of further index upside into early tomorrow. 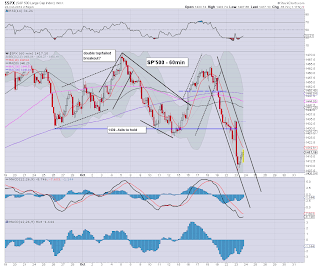 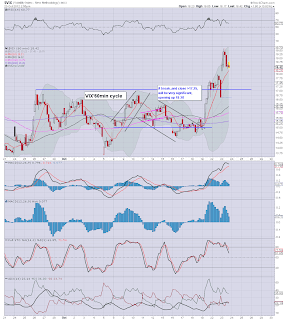 Wednesday is FOMC day..and there is a small threat of 1425/30. I can't see anything over 1440 though, and I will absolutely be fully short no later than Wednesday afternoon.

back after the close

re-shorted from sp'1417. I am starting to see some weakness out there. I might be early, but I sure think sp'1400 will be challenged, if not tomorrow, then Thur/Friday.

Posted by Trading Sunset at 19:58:00
Email ThisBlogThis!Share to TwitterShare to FacebookShare to Pinterest

The bounce from the 1407 low is still holding together..just. Upside target zone remains 1420/22. The VIX  has really cooled off from the open, almost completing a gap-fill in the low 18s. 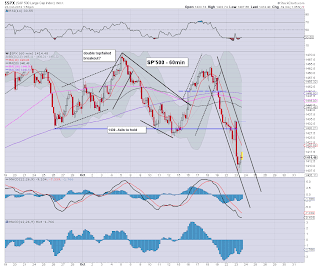 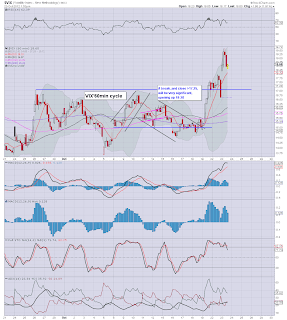 I am very tempted for a re-short before the close.

*Am also tempted to short FB, but I will refrain. Daily chart for FB says UP. If it does fall due to earnings tomorrow, I might just short on the bounce, whatever that might be.
--

With two hours to go..lets see if we can break back briefly into the 1420s.

back at 3pm
Posted by Trading Sunset at 18:56:00
Email ThisBlogThis!Share to TwitterShare to FacebookShare to Pinterest

We're seeing a very natural bounce from 1407, upside target this afternoon is 1420/22 A move over 1425 seems impossible after this mornings action. 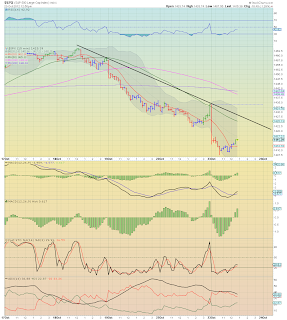 back at 2pm, or whenever I start hitting buttons ;)
Posted by Trading Sunset at 17:52:00
Email ThisBlogThis!Share to TwitterShare to FacebookShare to Pinterest

An attempt to break a new low in the past few minutes, but so far..the sp'1407 low is holding. There remains - just like yesterday showed, a strong potential for a latter day bounce, target would be 1417/22 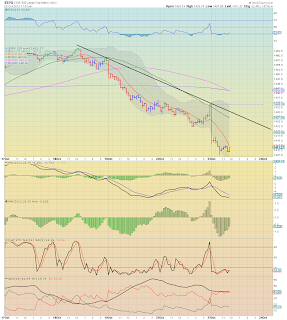 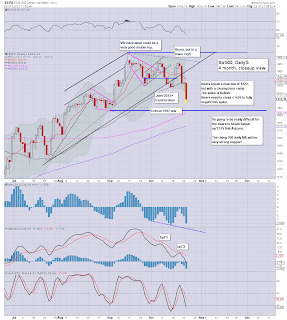 Pretty damn good day for the bears, especially in option land where most puts are +50/75%

I am seeking a re-short on any latter day bounce.

*back at 1pm
Posted by Trading Sunset at 16:53:00
Email ThisBlogThis!Share to TwitterShare to FacebookShare to Pinterest

Well, that was a pretty exciting past hour, with the sp' hitting 1407 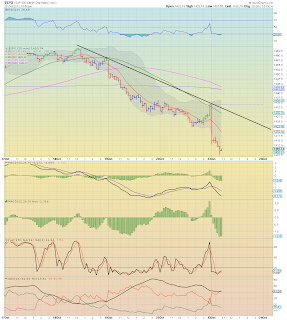 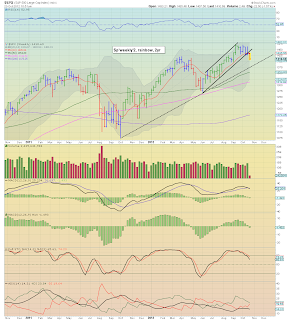 I closed out a little earlier, seeking a re-short later today around 1417/22.

Based on the weekly charts, primary target would be a hit of the lower bollinger @ 1325 within 1-3 weeks, if not 'days'.

VIX' has shown some good upside action, and bodes for a break above 20 later this week.

back at 12pm!
Posted by Trading Sunset at 15:53:00
Email ThisBlogThis!Share to TwitterShare to FacebookShare to Pinterest

10am update - bears starting to bite

After yet more lousy earnings, Mr Market is seeing some pretty exciting opening action Yesterdays closing hour ramp is entirely negated, and to be dismissed as what it was..nonsense. Next downside target is 1397, that will be 'difficult' to break though. 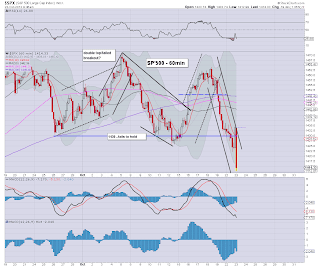 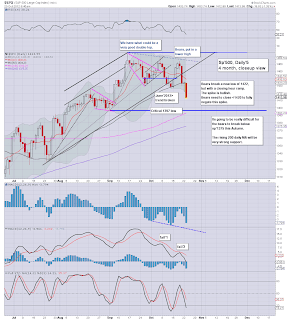 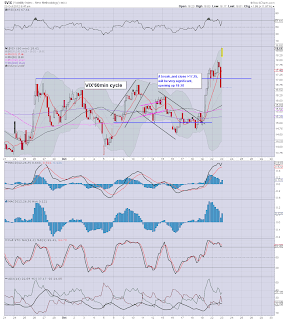 An exciting open, but as ever..important to focus on the bigger targets. The weekly cycle targets secondary rising support in the 1380/70 level, that is viable, but it sure won't be easy to get down to that level.

The VIX  has already made a break into the 18s...the big 20' level would be a major victory for the bears.

back at 11am (updates more frequent..when things...'exciting' ;)
Posted by Trading Sunset at 14:49:00
Email ThisBlogThis!Share to TwitterShare to FacebookShare to Pinterest

Whilst the main equity indexes closed broadly flat, there were still signs of underlying weakness out there. WTIC Oil closed lower by 2.2% @ $88.65. The important weekly and monthly cycles are warning of significant downside risk into early 2013. As is often the case, weakness in commodities is often a precursor to major equity declines. 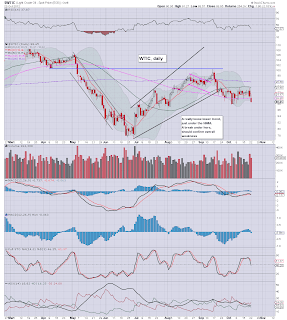 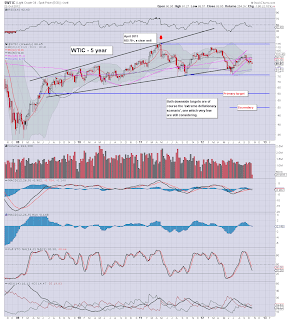 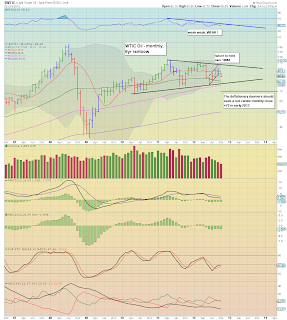 With the indexes ramping in the closing hour, a lot of the bears will be understandably disheartened, yet there are still some very important signs of weakness out there. Today's WTIC close in the 88s was a key one, and I think it bodes well for index declines as the week progresses.

I believe WTIC is indeed warning of underlying global economic weakness, and that - despite the money printing of the central bankers, Mr Deflation is still due another visit.


Looking ahead to Tuesday:

I am seeking opening moderate index gains, with VIX in the low 16s, but with an intra-day reversal, and at least moderately lower indexes at the Tuesday close. Opening moderate gains should be enough to fully reset the hourly index cycle, and set up a strong decline across Wednesday, and perhaps all the way into the Friday close.

One thing is for sure, with all the earnings and econ-data later this week, it will be very busy!

It was a bit of a messy day, with the indexes closing largely flat. The Nasdaq was propped up literally by a 4% ramp in the AAPL. With the VIX closing moderately red, Tuesday looks very likely to open at least briefly higher. 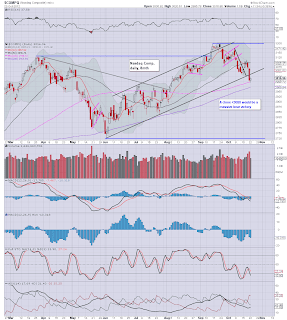 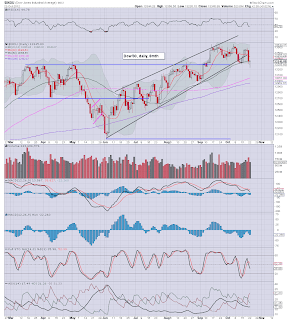 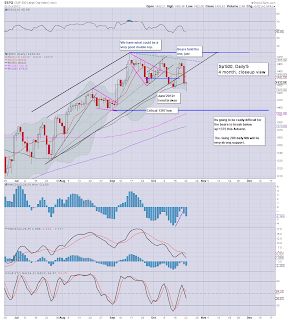 So, what to make of today, not least the closing hour? Well, the closing ramp is certainly something we've all seen hundreds of times in the past few years. Partly it was cyclical, we were due a minor bounce on the hourly cycle, but as we crawled higher, it looked like a short-stop cascade upward occurred.

The daily charts look a little scary from the bearish perspective. We have some very possible spiky-floor candles, especially clear on the SP' daily chart. Such spikes are often a sign of at least a short term low, and are often a good turn indicator.


The levels are clear...

Bulls need to break new index highs, sp >1474, with the bears needing to take out the very important 1397 low. With the VIX closing lower, the bulls are attempting to seize back control after last Friday's rout.

Considering the manner in which we closed, it would be very likely we'll open Tuesday at least moderately higher, perhaps into the low 1440s. Yet, that is less than 3% from the index highs, urghhh !

So, best guess, we open higher, but close Tuesday lower. Taking out today's low will be very difficult, not least if are trading in the sp'1440s tomorrow morning. It will be an important battle tomorrow, the winner will very likely determine whether we end October >1490..or close in the mid 1300s. That is a stark price range to keep in mind this week.

Also keep in mind that today, we did take out the recent 1425 low, and took out the big Nasdaq '3000 level. Bears broke a few levels, but they really need to show some power later tomorrow or Wednesday.

Both the daily and weekly trends are pointing down, but the bears must keep pushing lower. Until we put in a few daily closes <1397, the bears should not have any confidence of 'major downside' into year end.