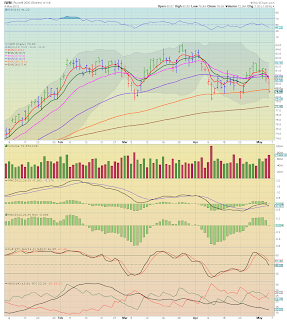 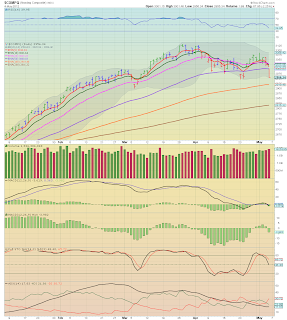 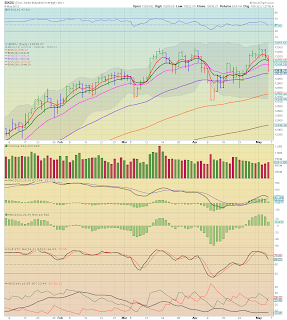 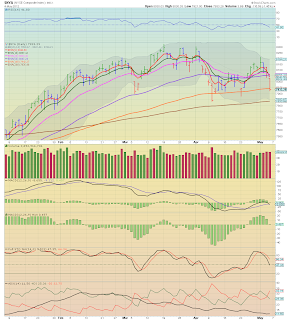 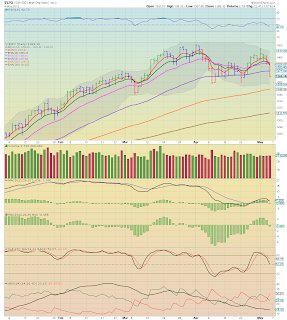 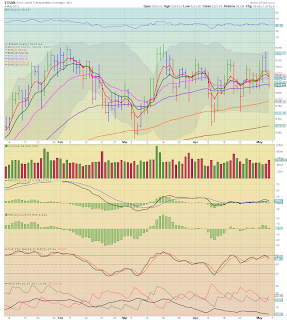 
Posted by Trading Sunset at 23:30:00
Email ThisBlogThis!Share to TwitterShare to FacebookShare to Pinterest 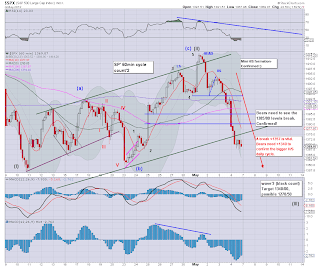 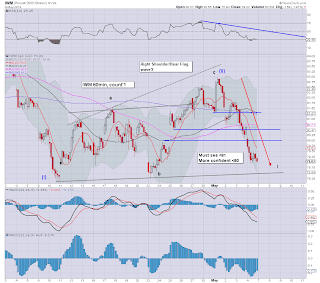 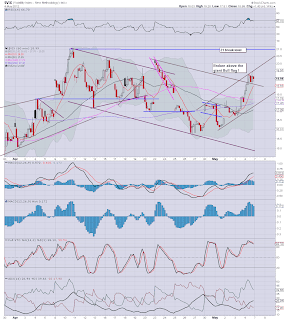 VIX looks like its setting up with a baby bull flag for Monday..with first target of 20/21.
--

Thats all for now, daily cycle update later in the evening.

---
Weekly/monthly cycle updates across the weekend!
Posted by Trading Sunset at 21:05:00
Email ThisBlogThis!Share to TwitterShare to FacebookShare to Pinterest

3pm update - falling into the weekend

An exciting closing hour is ahead. Who (human or algo bot) wants to hold long across the weekend? Lets see how many of the rats decide to bail ahead of the multiple European elections this weekend. A close of sp'1365 or lower would be a few bonus points lower for the bears.

Bears should however be already satisfied with today's action, the multiple bearish confirmations on the hourly and daily cycles are more than enough to give good confidence for much lower levels across next week. 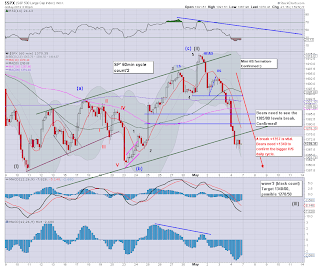 More after the close
--
*I will post the weekly cycles later this evening, as part of the weekend coverage :)
Posted by Trading Sunset at 20:01:00
Email ThisBlogThis!Share to TwitterShare to FacebookShare to Pinterest

So far, the market is a lot weaker than even many of the permabears must have been looking for. With just two hours left of the trading week, the market is unable so far to bounce more than 5pts off the sp'1368 low. 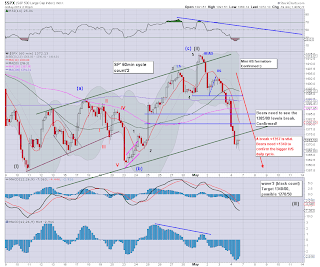 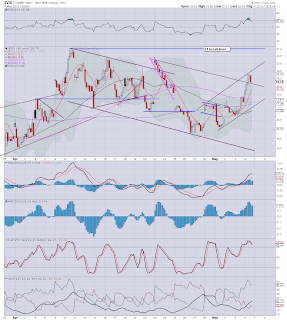 VIX is certainly up, but nothing too exciting yet. I guess the 'fun' will have to wait until Monday at least. Until VIX breaks 21, the bears can't get too excited.

Lets get one thing clear...there can be no excuses right now,.. .the daily H/S pattern is gradually being confirmed....who wants to be long across the weekend?

No...I didn't think so.
Posted by Trading Sunset at 19:02:00
Email ThisBlogThis!Share to TwitterShare to FacebookShare to Pinterest

Whilst the market remains weak - with nano-sized up cycles..lets take an hour to consider something I posted a few weeks ago. 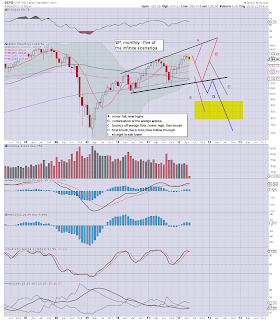 My current 'best guess' remains B.

Its based on the outlook that the Bernanke will appear sometime this summer with QE3, enough to cause a major bounce in the market. Whether that takes the market straight up into 2013..or just puts in a lower high (scenario C), we'll just have to wait and see.

There is a secondary idea I am considering, but I'll post more on that later.
---
So, which letter did you pick?

Brief note on the SP'60min 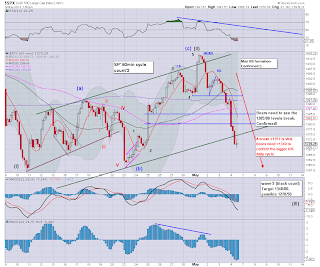 More across the afternoon...when bears should be looking for increasing market weakness in the closing hour.

Posted by Trading Sunset at 18:00:00
Email ThisBlogThis!Share to TwitterShare to FacebookShare to Pinterest

12pm update - everything is proceeding as I had foreseen

We're only down to around the low 1370s, but its a pretty damn good way to end the week. The mini H/S formation is confirmed. The great H/S formation on the daily cycle will also be confirmed if we break around 1340 - or 1365/60..depending on how generous you wish to be to the bulls.

The VIX is finally showing some significant upside, but it still is not quite enough to get hyper-bearish yet. 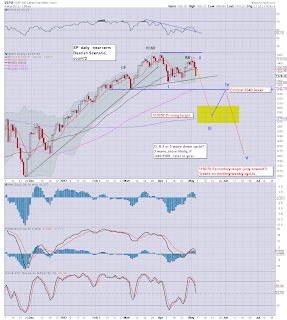 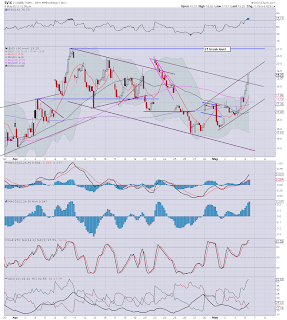 As is often the case, the question now is....'who wants to risk holding long across the long weekend?'. I'd expect weakness across the afternoon, but especially in the closing hour.

Things are indeed looking good for the bears...more across the afternoon.
Posted by Trading Sunset at 17:01:00
Email ThisBlogThis!Share to TwitterShare to FacebookShare to Pinterest

The bears have to admit today is going better than they could have hoped for. The early pre-market chop nonsense...has turned to some good 1% falls across all indexes. The VIX is finally showing some sign of trouble ahead.. +6%...although still only a minor move.

Best of all right now, the daily cycles on both the SP'500 and the Rus'2000 index are now negative cycle (see MACD, blue bar histogram indicator). On balance, we should cycle lower for at least 3-5 trading days, so...perhaps all of next week.

So, lets focus on those daily cycles, ignore the intra-day noise! 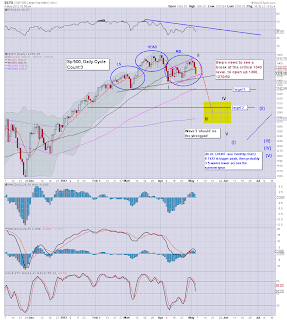 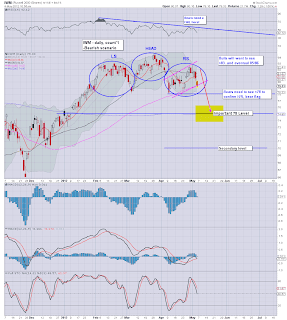 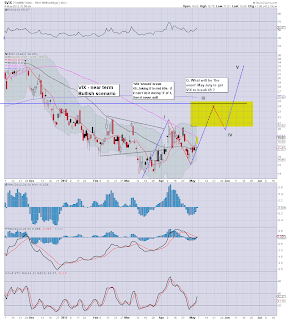 Bears do need to see VIX see a +10/15% up day 'soon'. 5% just won't cut it, and would suggest underlying strength still in the market.

However, as noted, those daily cycles are looking VERY good for the bears. Downside targets are clear, stop levels are clear...there are no excuses.

More later.
Posted by Trading Sunset at 16:00:00
Email ThisBlogThis!Share to TwitterShare to FacebookShare to Pinterest

10am update - this market is going down..HARD

The choppy pre-market action has reverted back to yesterdays consistent weakness. Watching Rick Santelli on clown channel, he remains the only voice of reason amongst the entire mainstream financial TV networks. It is always a wonder he is still 'permitted' on TV for speaking the truth about what are truly dire jobs data.

The daily cycle now becomes paramount to keep in mind...so lets start with.... 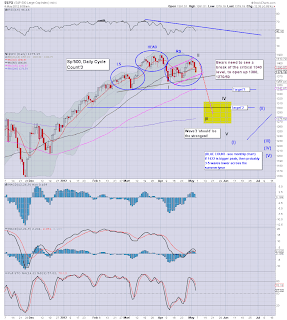 A clear break under the 10 and 50 day MAs. As I noted yesterday, these were always important to break through early in the day, so that's a very good sign for the bears. 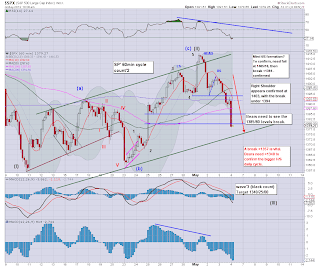 Regardless of the intra-day noise, keep that daily chart in mind. If...it is correct, we do indeed have a considerable way to fall next week.

Right now, bears would certainly like to see the market close down at least 0.5...preferably 1%. Anything under sp'1380 would be a bonus.

*It remains an added bonus to see AAPL -$9 @ 572 (breaking the important $580 level), for me, it confirms the underlying 'hysteria' phase is coming to an end.

Good wishes!
Posted by Trading Sunset at 15:01:00
Email ThisBlogThis!Share to TwitterShare to FacebookShare to Pinterest 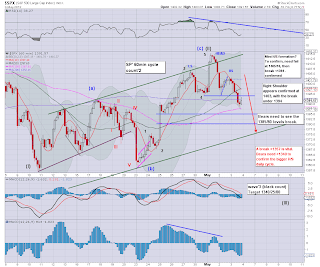 AAPL breaks 580, I would argue this is a key sign for the tech sector, and the wider market.
Market briefly bounced after the earlier snap lower...but we're now -0.5% again.

There is no recovery...there will be NO recovery.

Good wishes for Friday trading!
Posted by Trading Sunset at 13:31:00
Email ThisBlogThis!Share to TwitterShare to FacebookShare to Pinterest 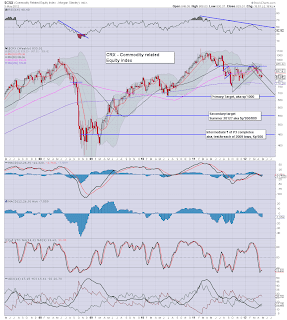 The CRX caught my attention as early as Spring 2011 - which was interestingly when we put in what may become a long standing price peak.

Since the 2008 collapse wave, and the subsequent 'rally of delusion' the CRX is one of the cleanest looking H/S formations for anything out there. The RS peak of March'2012  never came close to breaching the February 2011 peak. It is a formation that looks good, and it is now seemingly on a trend that will take out a number of key warning levels.

Primary CRX target for the bears will be 680. That is 150pts lower, roughly 18%. Such a level would indeed equate to somewhere around Sp'1150/00. The last time CRX was at that level, SP' was indeed 1000. I'm not expecting Sp'1000 this summer, although it is something to keep in mind, but surely we'd need a black swan or two to reach those low levels.

As for those other two levels of 550 and 450, I just can't see that happening until 2013, if at all. The Bernanke - and other central bankers, will want to do everything in their powers to prevent a second deflationary collapse wave. We all know Benny will already be standing by to hit the QE3 button, but as is ALWAYS the case, the Federal Reserve is reactionary to events, they never pre-empt.

We will probably have some big market moves tomorrow...one direction or...the other.