As we start the second half of September, summer 2012 is rapidly fading away (at least here in London city), Autumn is imminent...and a long winter of grey cold gloom lies ahead. Yet, for Mr Market, with the world economy now clearly fixed, its just up, up...UP ! 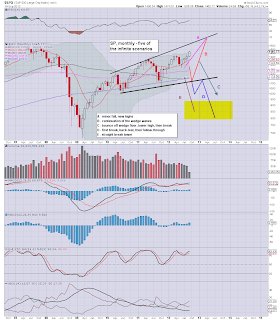 When I originally threw this chart out there in May of this year, scenario 'A' always seemed even less likely than the overly bearish 'E'. After all, sp'1450, 1500, how was that viable before at least a test of the lower channel?

Yet, the early summer pullback to sp'1266 was indeed a remarkably brief affair, the bounce - as many expected, began, but it just kept going. We're now around 100pts higher than the 'natural wave'2 bounce, should have taken us. So, on any basis, it can't be a 2, all that can be said, is that we're still cruising higher.

Without question, at the current rate, we'll close the year somewhere around 1550/1600. This of course is absolute heresy to the doomer bears out there, many of whom are still clamouring for some kind of October/Sunday night surprise.

The 'Sunday night surprise' factor is always going to be a wild card factor in any outlook. Whether its a Greek exit from the Euro, or an Israeli attack on Iran. Any such issue would wildly put a sharp halt to the current strong bullish trend.


As seen on the daily charts...another higher low could easily be 1420, and that certainly would not put a dent in the current trend. 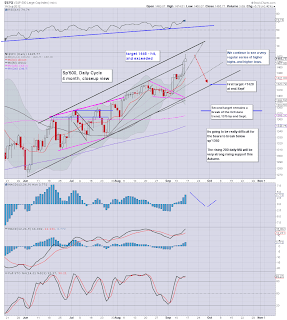 On any basis we are overbought, and due a minor pullback, yet unless we close September <1375 - which seems extremely unlikely, the bigger trend remains UP.

For even the most deluded bulls out there, who think the economy is indeed still recovering, sp'1600 by end year, has to be seen as pretty astonishing.