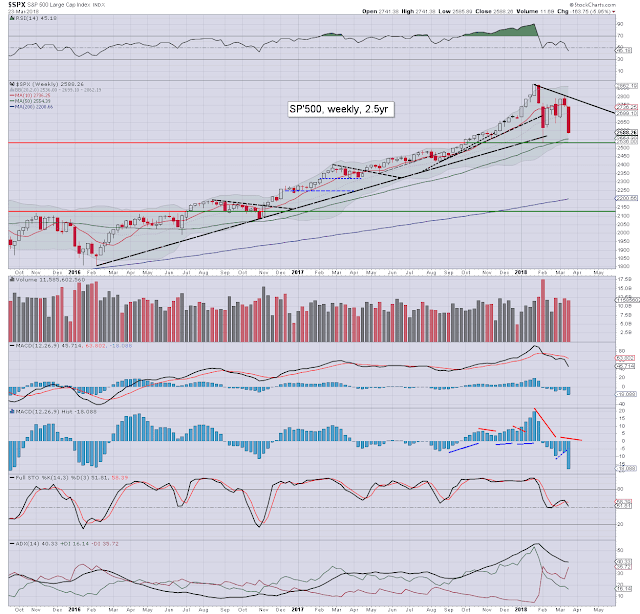 To be absolutely clear, this is a very borderline situation. Either the market reverses from around current levels, or the Feb' low is going to be taken out, and that would offer further downside to (at least) the mid/low 2400s. My guess is that we do battle back upward. Earnings and econ-data are certainly supportive of such a view. Other world markets are a concern though.

Right now, the most bullish outlook is the original big target of the 2950/3047 zone. Clearly, even if the trend does resume upward, that will take some months to be seen.
-- 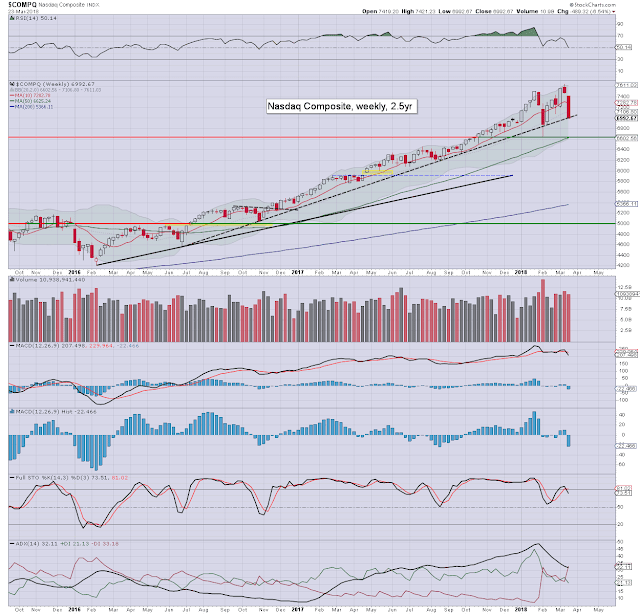 Tech lead the way lower this week, settling -6.5% at 6992. Indeed, the weekly close under the 7k threshold justifiably caught some mainstream attention. Note the Feb' low of 6630, which is close to the lower bollinger. On balance, the Nasdaq shouldn't break <6600. 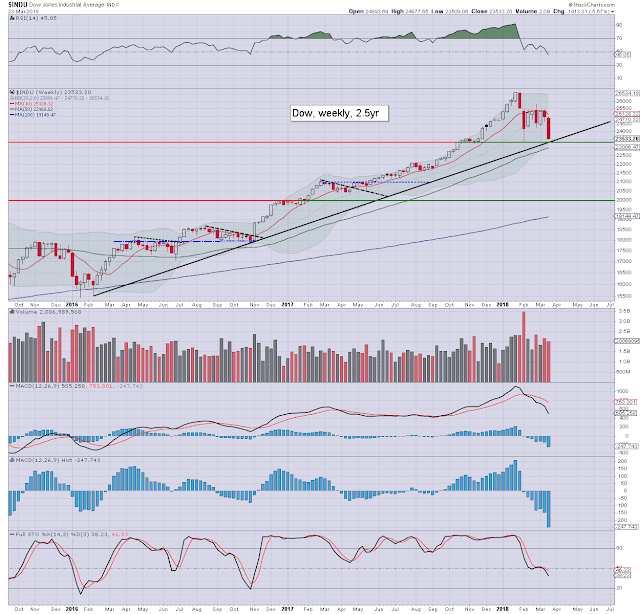 The mighty Dow settled -1413pts (5.7%) to 23533. Keep in mind the Feb' low of 23360. Underlying MACD (blue bar histogram) cycle is the lowest its been since October 2008, which is pretty incredible to reflect upon. The VIX certainly isn't reflective of such cyclical weakness, and does give credence to the notion that the Dow will resume  back upward across the spring. 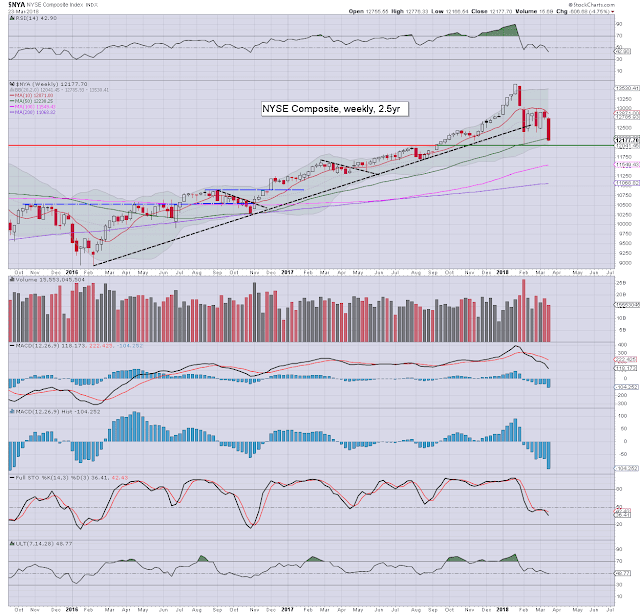 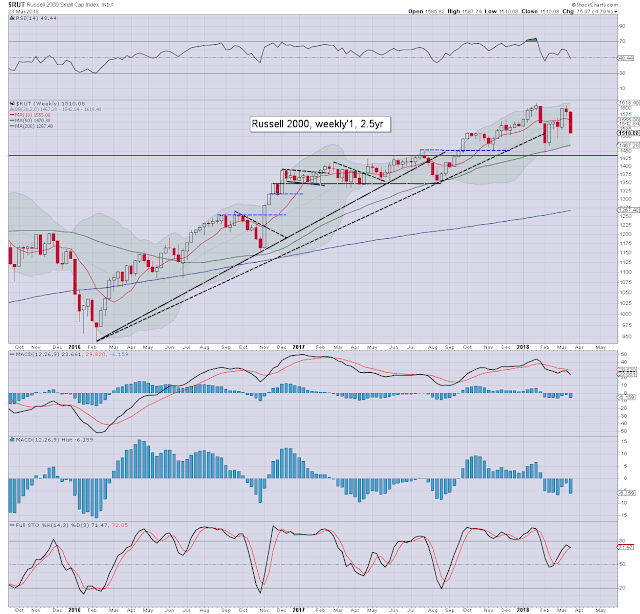 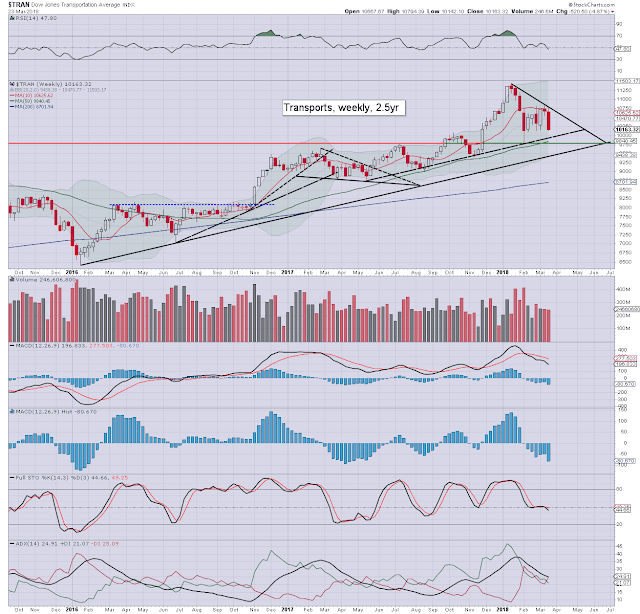 A very bearish week, with all six of the main indexes rather powerfully lower.

Weekly price momentum for the Dow is at the lowest level since Oct'2008, although that is not being confirmed via the VIX.

The week settled at the lows, and there is currently zero sign of a floor/turn.

Best guess: renewed upside across the spring/early summer, but that (overly bullish?) outlook would have to get dropped if the majority of indexes break the Feb' low, and see a weekly close under. As many now recognise, how next week trades and settles, will be massively important. The fact it will be end month and Q1, merely make it even more important.
-- 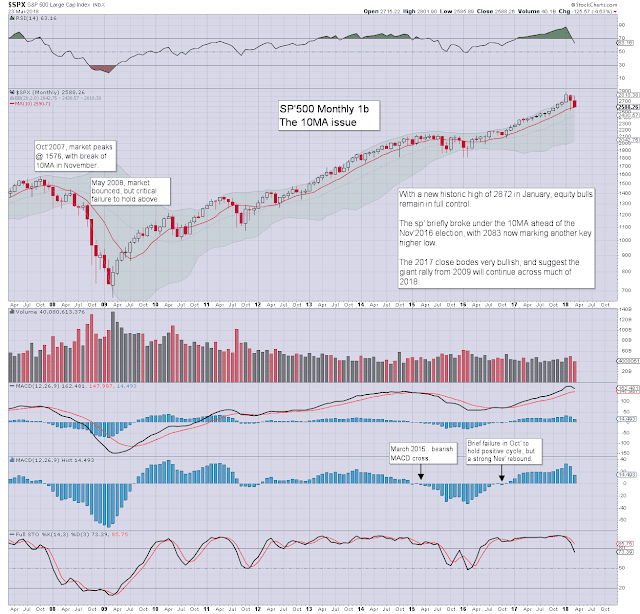 Regular readers will be well aware that I place a fair amount of importance on the monthly 10MA. That stands at sp'2590, and indeed, we're currently fractionally under it, with just four trading days left of the month. If the sp' unravels into end month, it would bode badly for the spring ahead.

For those of you who believe 2872 was the conclusion of the rally from March 2009, your natural first target should be the lower monthly bollinger, which will soon be in the 2100s. That is of course... a very long way down. The most optimistic bulls could seek the 2675/700 zone, that would still make for a net monthly decline... but nothing 'critical'. Yours truly will be very much focused on how March settles this coming Thursday.
--

It will be a short four day week.

*there are just a few fed officials scheduled, and none will likely be of any importance.

**as the US (and most other world markets are closed for 'Good Friday'), once the econ-data is out of the way, Thursday will tend to be rather subdued. It will notably be the end of the trading month/Q1.

*the next post on this page will likely appear 6pm EST on Monday.
Posted by Trading Sunset at 16:00:00
Email ThisBlogThis!Share to TwitterShare to FacebookShare to Pinterest
Newer Posts Older Posts Home
Subscribe to: Posts (Atom)