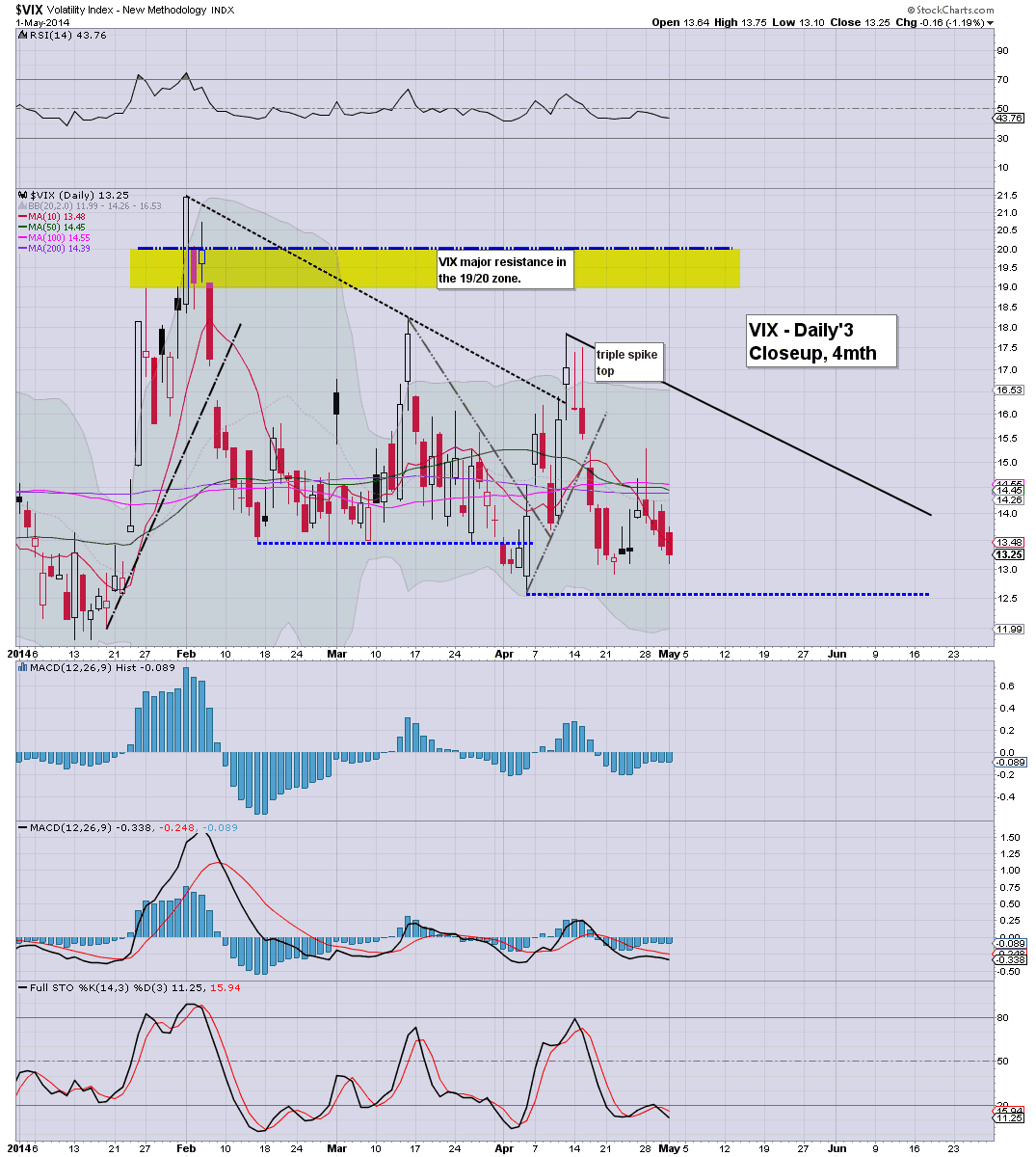 Little to add, on what was a very quiet day.
-

If the market likes the jobs data tomorrow morning, indexes will jump 1% or so, and that should easily be enough to kick the VIX lower into the weekend, probably into the low 13s..even 12s.
-

more later on the indexes.
Posted by Trading Sunset at 23:00:00
Email ThisBlogThis!Share to TwitterShare to FacebookShare to Pinterest 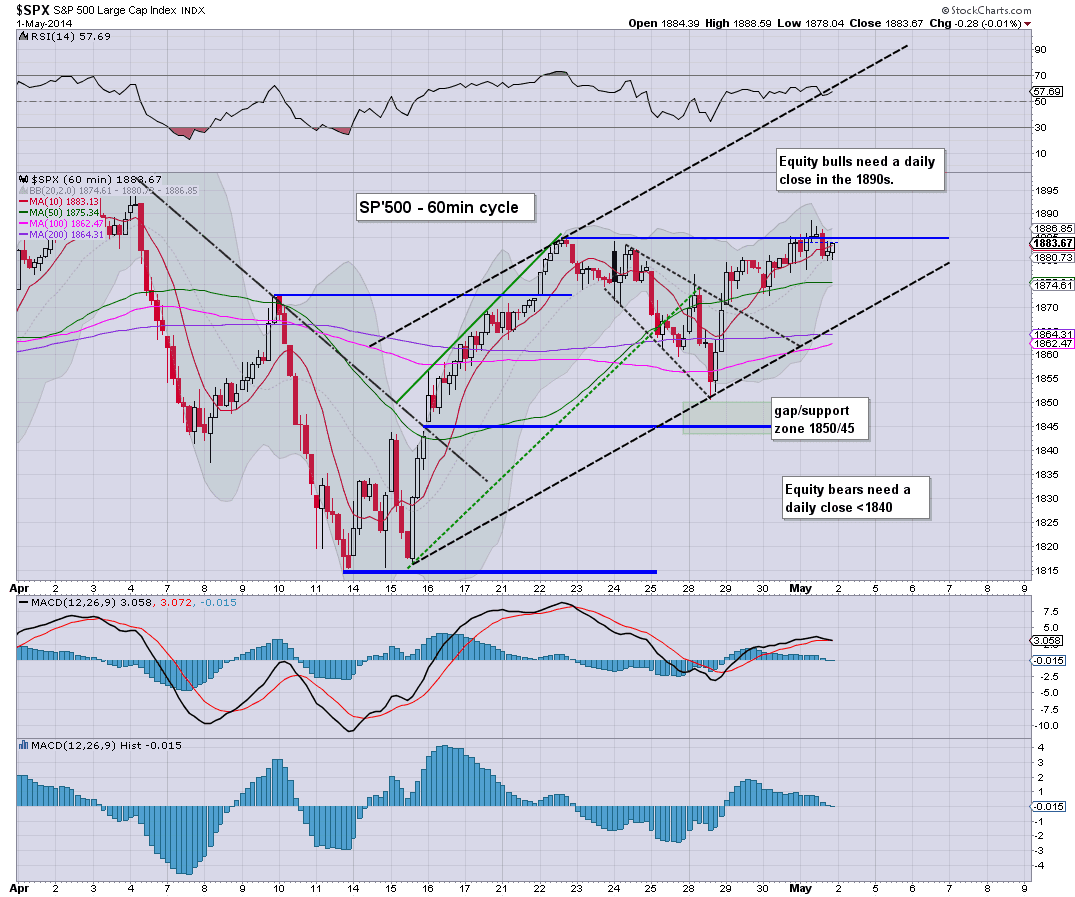 Little to add, on what was a day when the market merely settled into a holding pattern ahead of the Friday jobs data.
-

*I hold heavy long overnight, would prefer an exit late Friday, but if I have to hold into next week, that is fine with me.
-

3pm update - don't get lost in the mild hysteria

Mr Market continues to see minor weak chop, with the sp' vulnerable to downside to sp'1875. Yet, any retail amateur trader getting lost in mild bearish hysteria is likely setting themselves up for a difficult Friday morning. 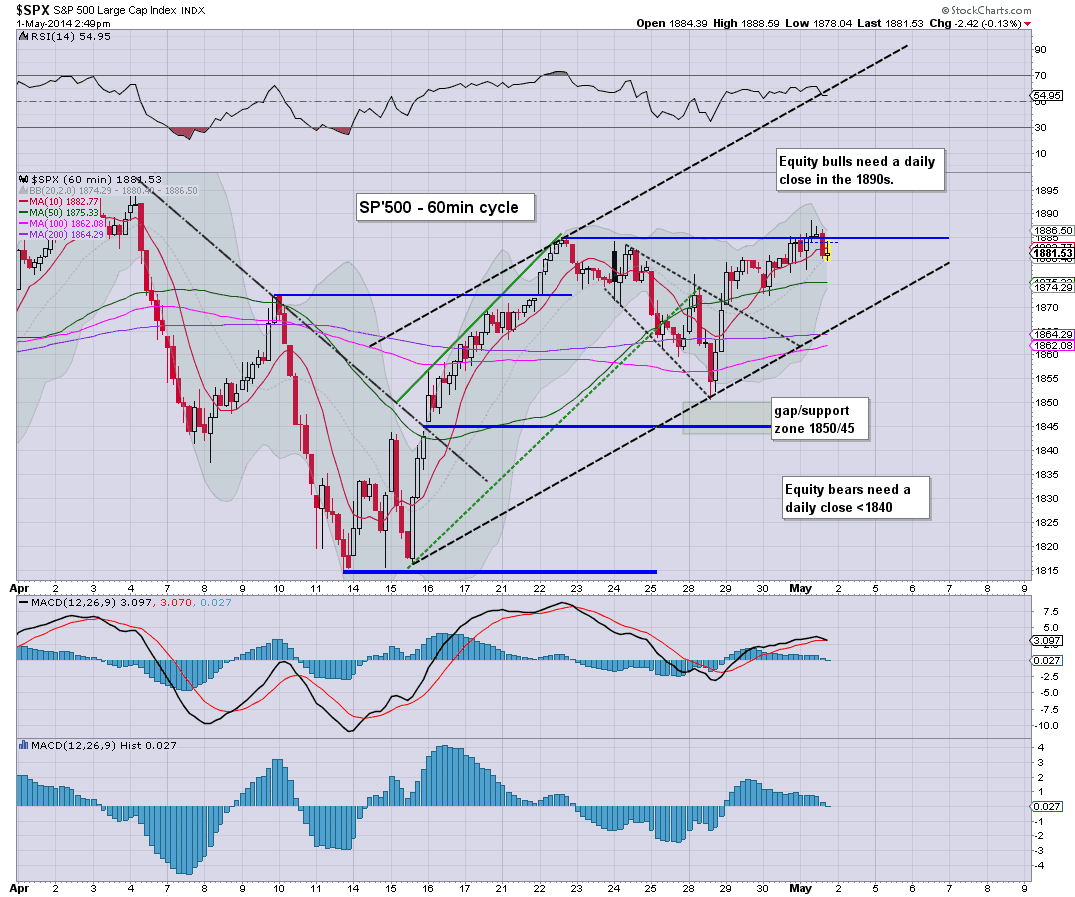 It is very likely, a last ditch opportunity for the bears to exit before the sp'1900s..whether tomorrow or next Monday.
-

*I hold heavy long overnight, especially in the Oil/Gas drill stocks, DO, RIG, SDRL. Yes..they are all down, but then, I bailed yesterday near the highs..and I'm back in at much lower levels, so I ain't complaining!
-

There can be NO excuses. Everyone is getting a chance to re-position ahead of the Friday jobs data. Bears are getting a chance to exit....and bulls are getting the opportunity to buy back in at lower levels - at least in some stocks/sectors.
Posted by Trading Sunset at 19:55:00
Email ThisBlogThis!Share to TwitterShare to FacebookShare to Pinterest

Market is offering the bears a minor rollover, back to the mid sp'1870s, but in the scheme of things, it is entirely irrelevant. Metals remain weak, Gold -$7, Silver -1.4%. Oil is also weak, -0.6%. Equity bulls have little to prove into today's close. 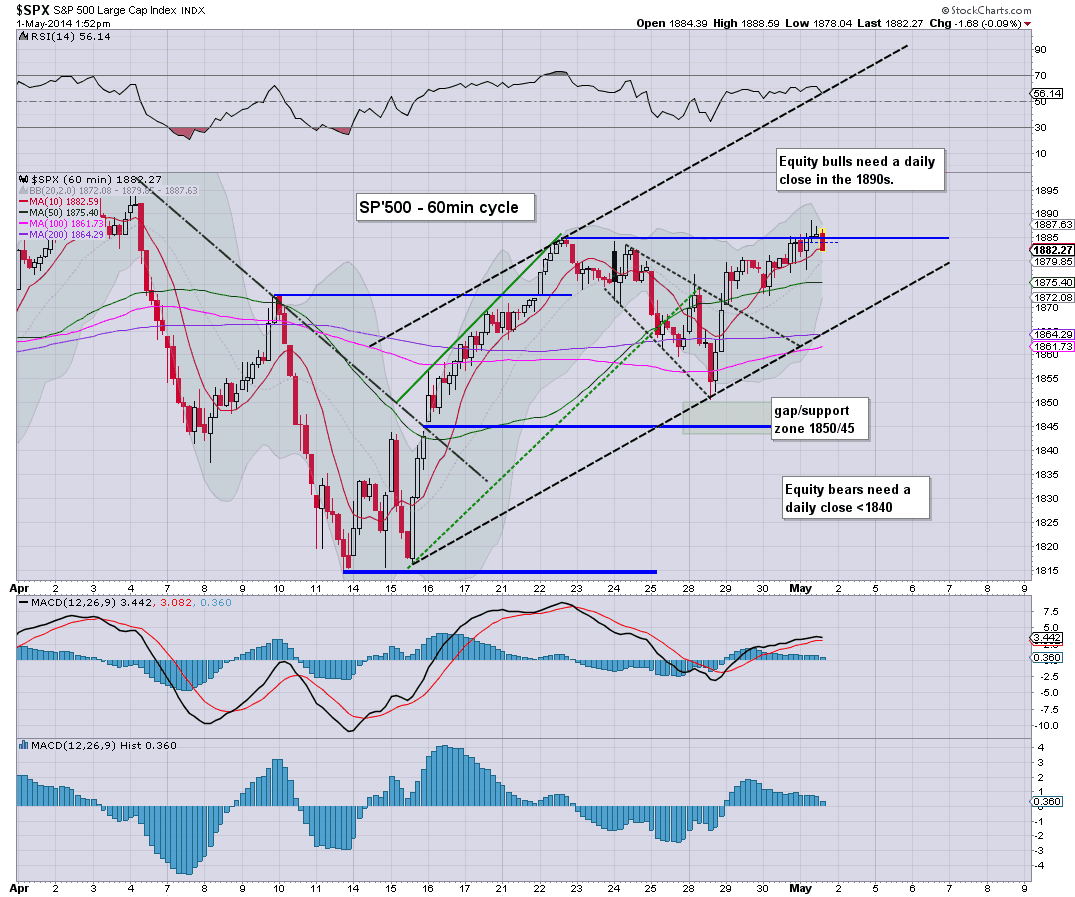 So, we're seeing an hourly cycle rollover, and I realise some will be getting moderately excited ahead of tomorrows jobs data.

Yet.. the bulls have nothing to prove. The recent 1884 high has been decisively broken above.

Even the Nasdaq (I'll highlight it later), has broken descending resistance.

Transports is strong, and close to breaking a new historic high.
-

Price action remains outright bullish on the bigger cycles, and anyone shorting the indexes into today's close is vulnerable to getting nuked at the Friday open.
Posted by Trading Sunset at 18:56:00
Email ThisBlogThis!Share to TwitterShare to FacebookShare to Pinterest

Mr Market continues to see minor chop, but it is notably holding the sp'1880s. Rest of today looks set for more of the same, as attention turns to the monthly jobs data. Any number >175k net gains, and the mainstream will likely spin it as another sign of the continuing recovery. 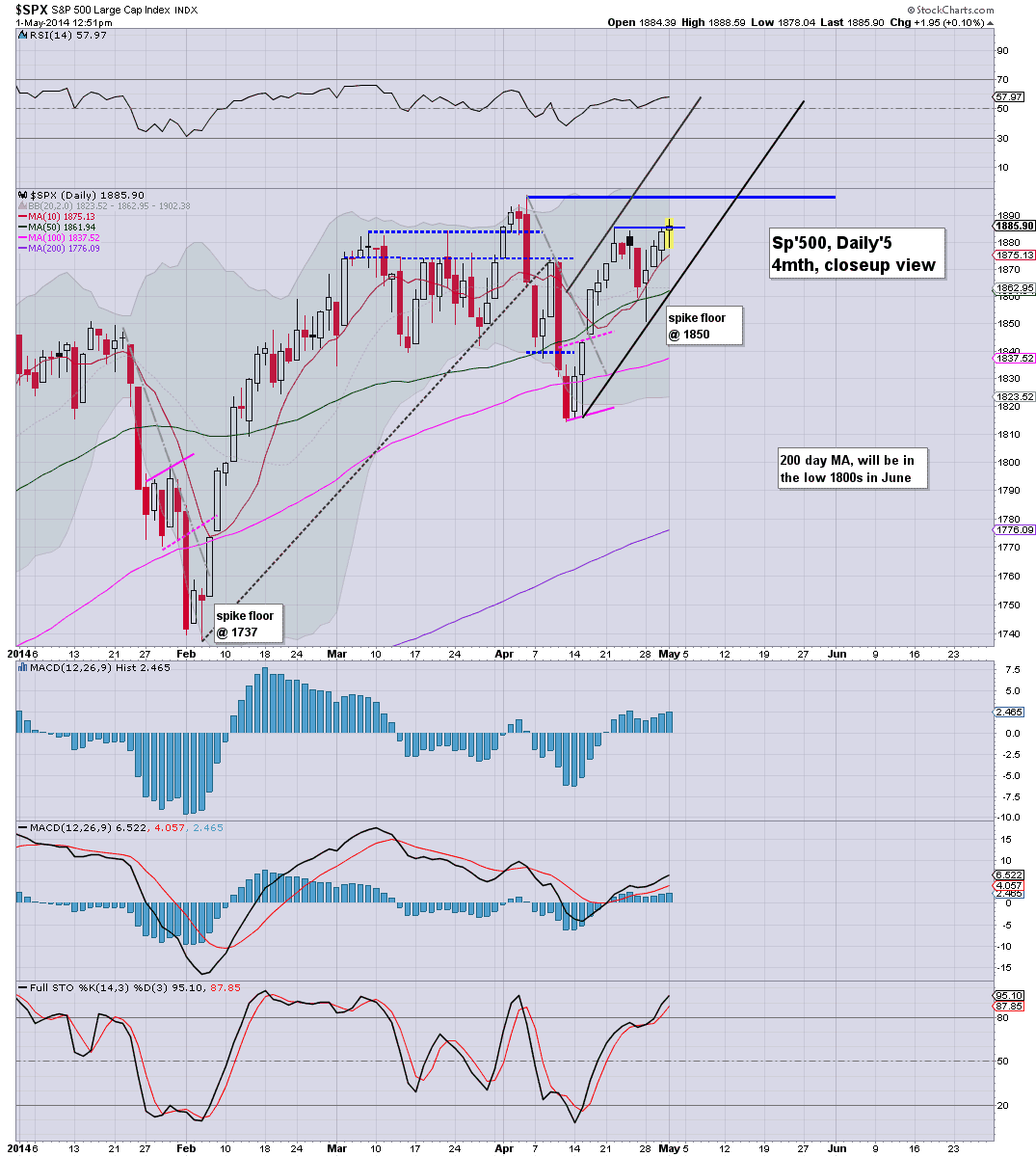 back at 2pm.
Posted by Trading Sunset at 17:51:00
Email ThisBlogThis!Share to TwitterShare to FacebookShare to Pinterest

Mr Market continues an inexorable slow and steady climb toward the sp'1900s, whether late Friday..or next week, it really makes no difference. Equity bears are simply powerless, as reflected in the VIX. Metals remain weak, Gold -$7. 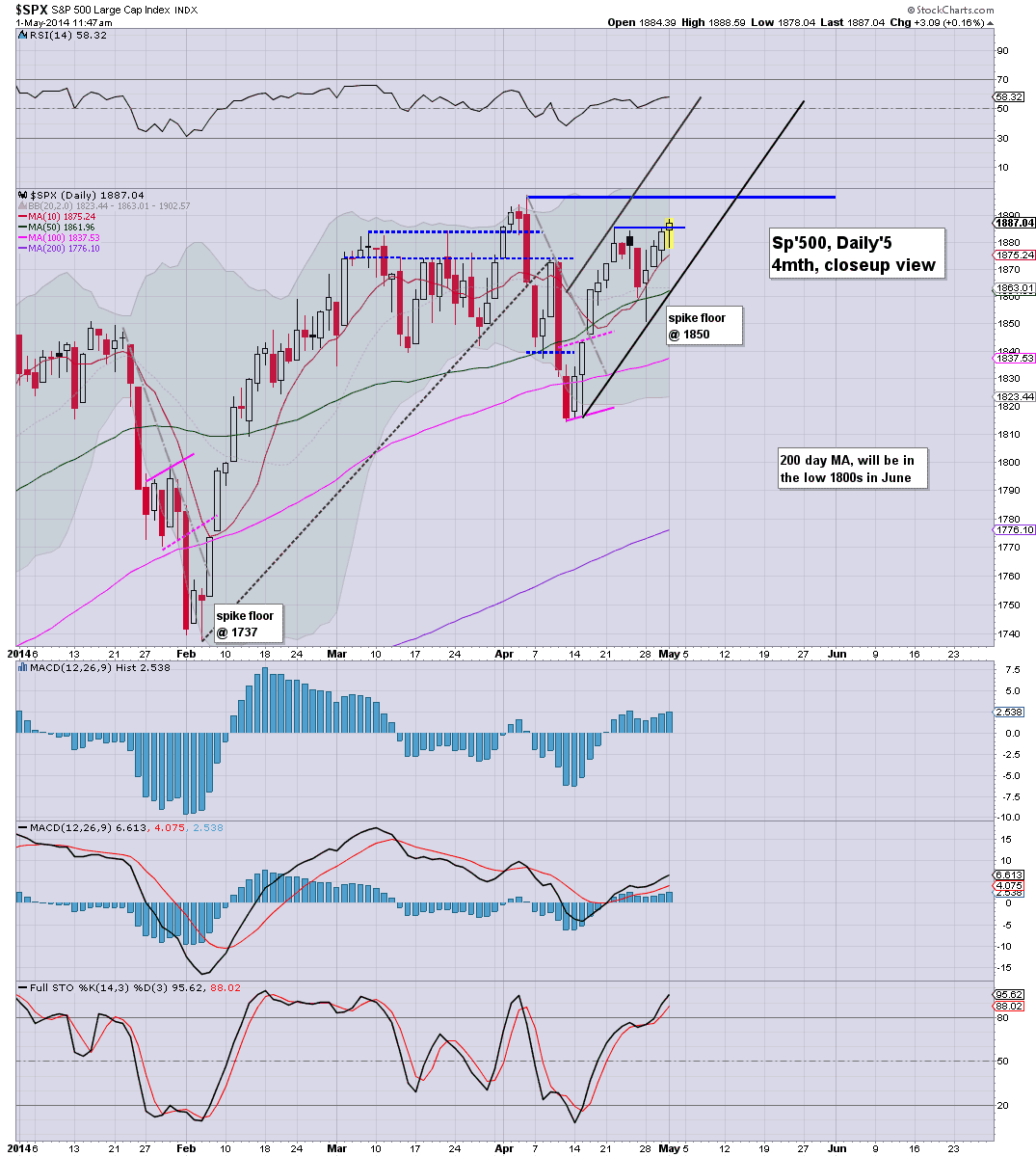 *I should note, I certainly like the idea of picking up a considerable VIX call block (Sept/Oct 20-25 strike), but not yet. I'd want to wait at least another 2-3 weeks, if not even early June.

--
time for lunch :)
Posted by Trading Sunset at 16:49:00
Email ThisBlogThis!Share to TwitterShare to FacebookShare to Pinterest

11am update - another push higher

It remains a market of minor chop, but the underlying upside is there for anyone to see. A daily close in the sp'1890s looks due today..or tomorrow. A weekly close in the 1895/1905 zone would really smite the bears. Metals remain weak, Gold -$9, Silver -1.4% 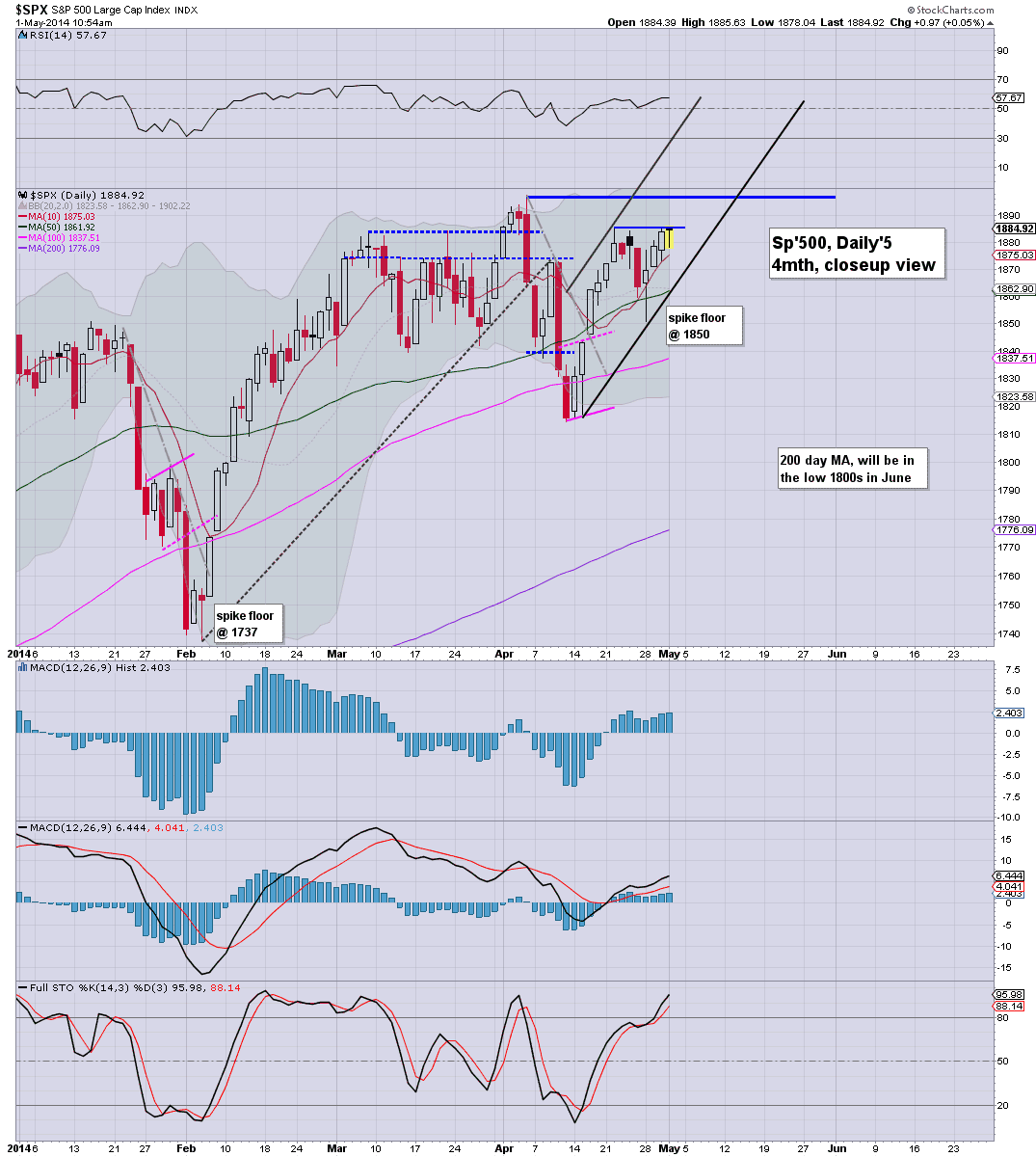 Without getting lost in the minor noise, the broader upward trend most certainly continues.

There is next to zero power on the downside, and if the Market likes the monthly jobs data tomorrow morning, then we're set to close the week with new historic highs.
-

Look to the Nasdaq....the threshold to close above is clear... 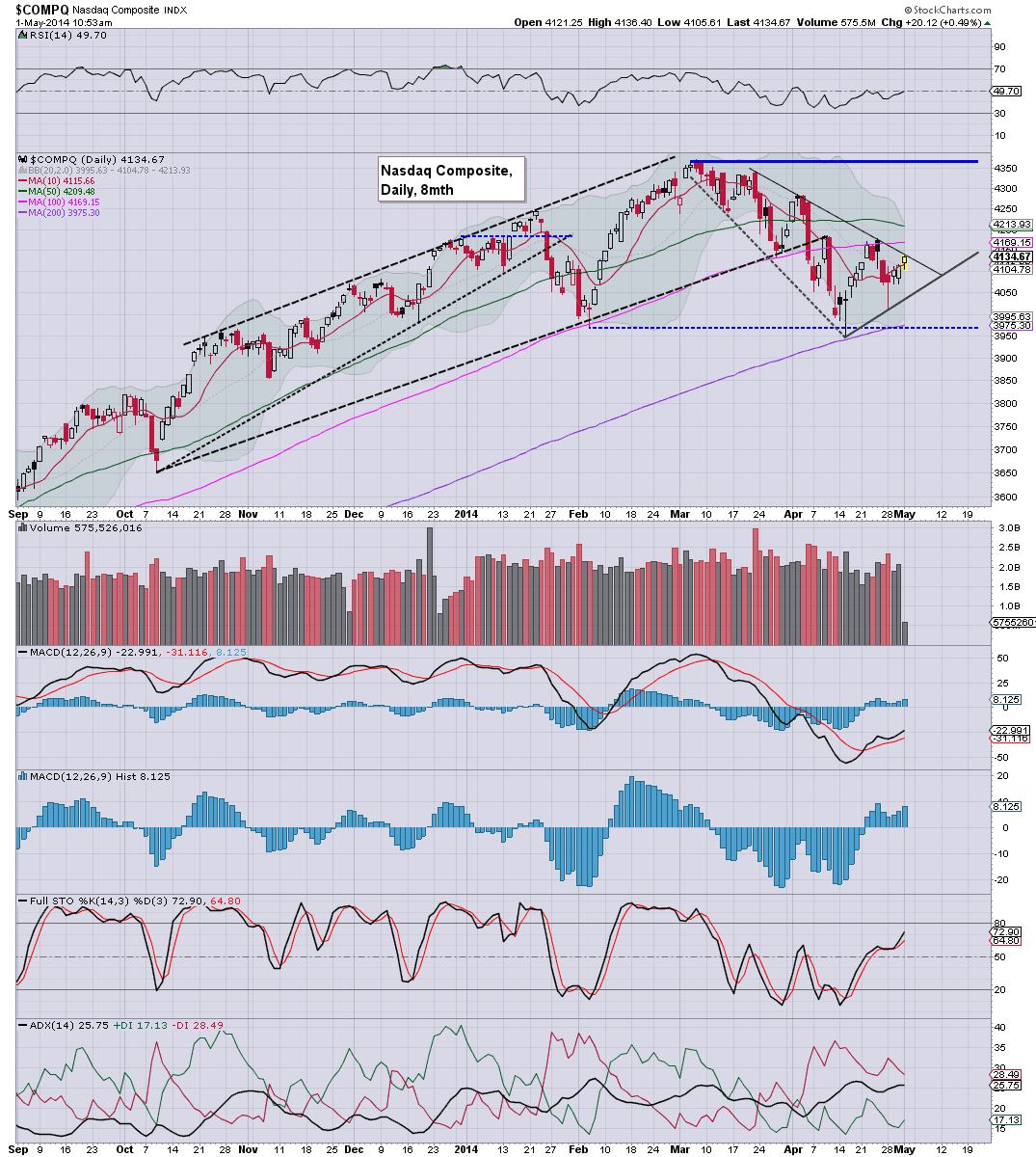 --
*I am heavy long, esp' via the OilGas Drillers of DO, RIG, SDRL, My entry this morning was 'reasonable', but I sure didn't catch the lows.
Posted by Trading Sunset at 15:56:00
Email ThisBlogThis!Share to TwitterShare to FacebookShare to Pinterest

May has begun with some minor opening chop, but the underlying upward pressure is clearly still there. A daily close in the 1890s is viable today, but more likely tomorrow. Precious metals are weak, Gold -$9, Silver -1.2%. 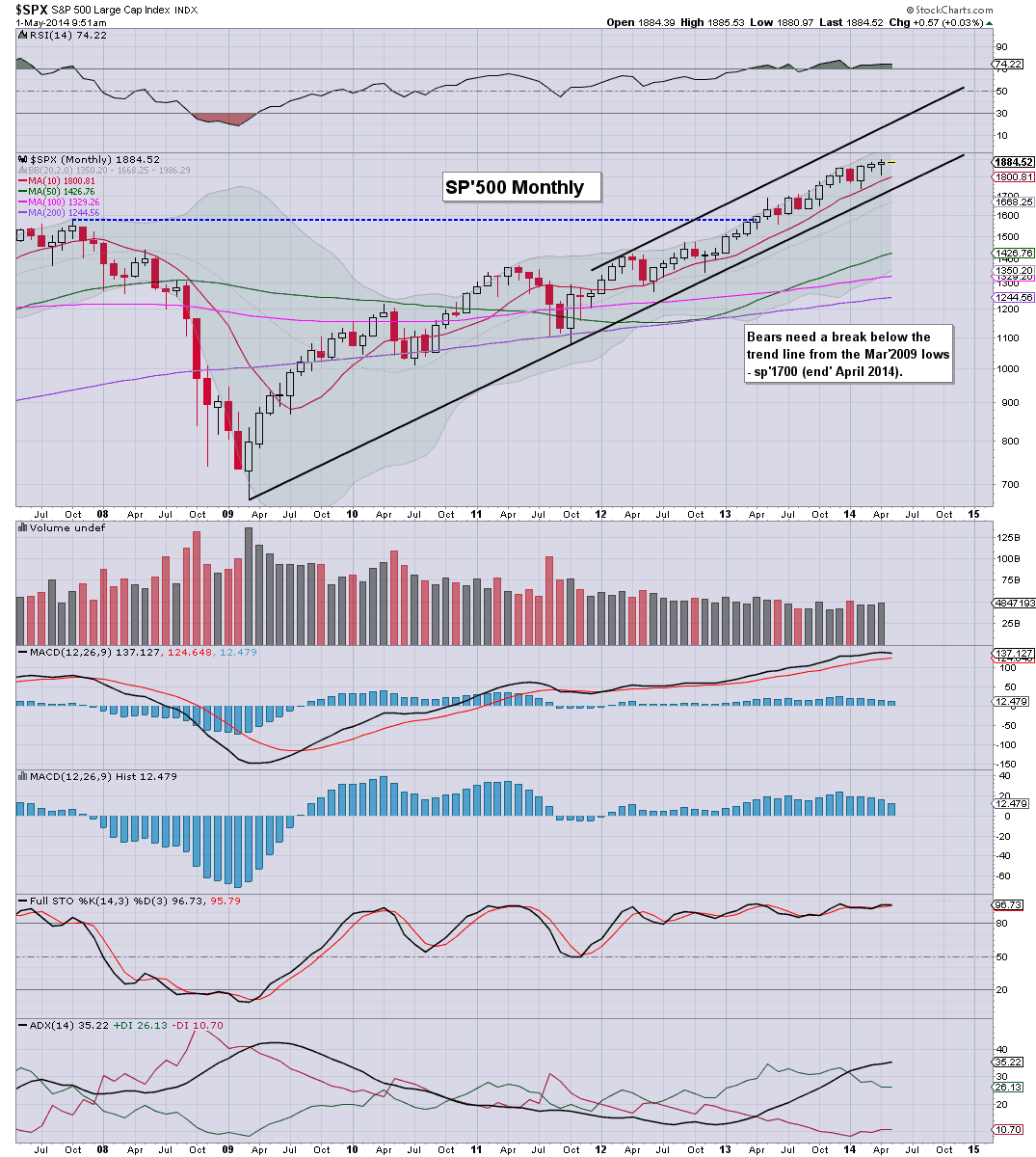 *most notable, upper bollinger on the big monthly, now offering the 1980s. However, weekly charts will be restrictive in May to the 1920/30s..at most (I estimate).
-

**I picked up my 3 drilling stocks again, DO, RIG, and SDRL, will very likely hold into tomorrow, when I am seeking a more sig' push upward.
-

What is clear..there is NO power on the downside, and with FOMC and GDP out of the way, equity bulls have little to be concerned of..at least for another week or two.

Much like the past few days..there just isn't much downside power.
Posted by Trading Sunset at 14:53:00
Email ThisBlogThis!Share to TwitterShare to FacebookShare to Pinterest 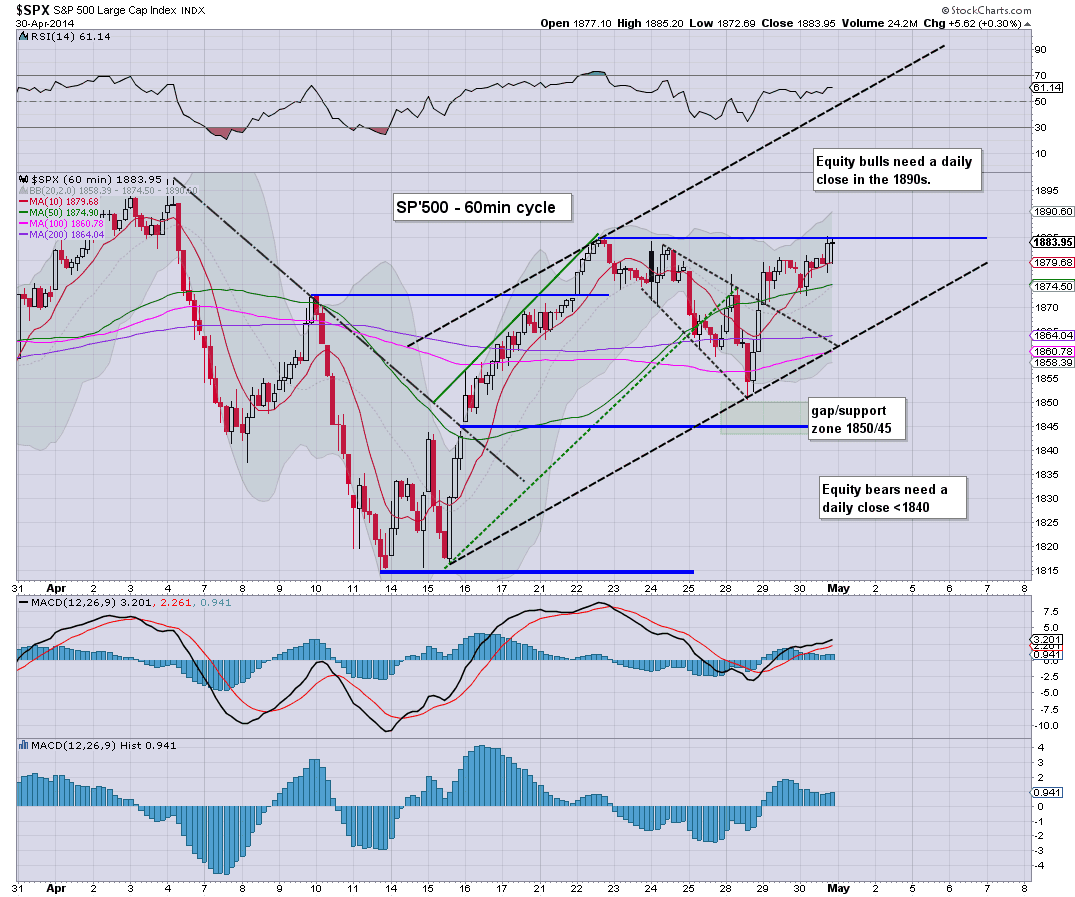 I think there is a fair chance we'll slip 4-6pts lower in the opening hour...which for me, would be a buying level. Certainly, primary weekly trend is to the upside, and the sp'1900s look a given.

-
I will be seeking to pick up my drilling stocks again, DO, RIG, and SDRL

Oscar was bearish for a day..and now back on the bull train.. I'm not surprised.
--

Good wishes for May trading!

The opening drops are in the range I was seeking..so...now I sit back...and see how we trade into the afternoon. I would be content to hold ALL into the Friday jobs data.
-

Buy in May, bears stay away?

April saw significant downside for the R2K/Nasdaq, but the broader market only endured moderate declines of 4-5%. April ended relatively well for the bulls, with net monthly gains of 11pts, settling @ sp'1883. The question is, what bodes for the market in the typically troublesome month of May? 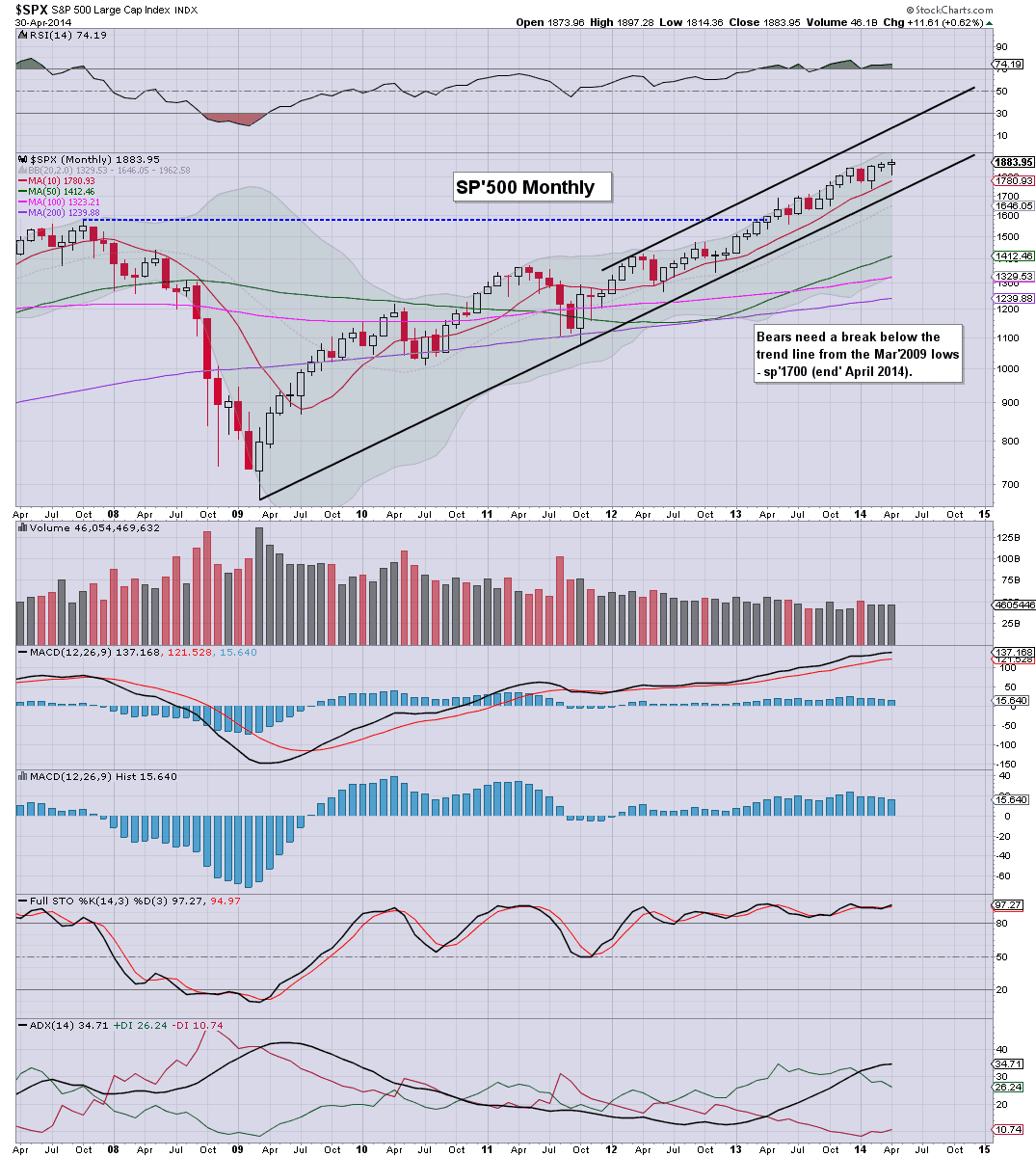 *I like the count on weekly8b, if correct, we'll max out sometime in mid/late May, early June at the latest. Equity bears should get 2-3 weeks warning before a major snap lower, via a few blue candles.
--

So...another month comes to a close, and it is arguably another one for the equity bears to forget. Tomorrow, May'1st will be month'32, since the giant wave from Oct'2011 began - when the market was a mere sp'1074.

We have the usual jobs data, personal income/outlays, PMI and ISM manufacturing, and construction spending.Yellen is talking early tomorrow morning, and her comments could easily give the market a kick..either way.

I had a mixed day. I should have exited STX at the open, but no..I held, only to watch STX get ground down across the day. The one solace were the Oil/Gas drilling stocks. I bailed on DO for a very sig' gain, and after some consideration, I also dropped RIG and SDRL. I will look to again pick up  RIG/SDRL, or even all 3 drillers tomorrow morning.

As well as STX long, I'm still holding CHK, but that one is kinda just meandering at present.

Overall, I have ZERO interest in picking up any shorts for at least another few weeks. Whether we rollover in mid/late May..or June., that is very hard to guess right now.

All that I can say...as a self titled permabear, it remains a difficult and nasty market. 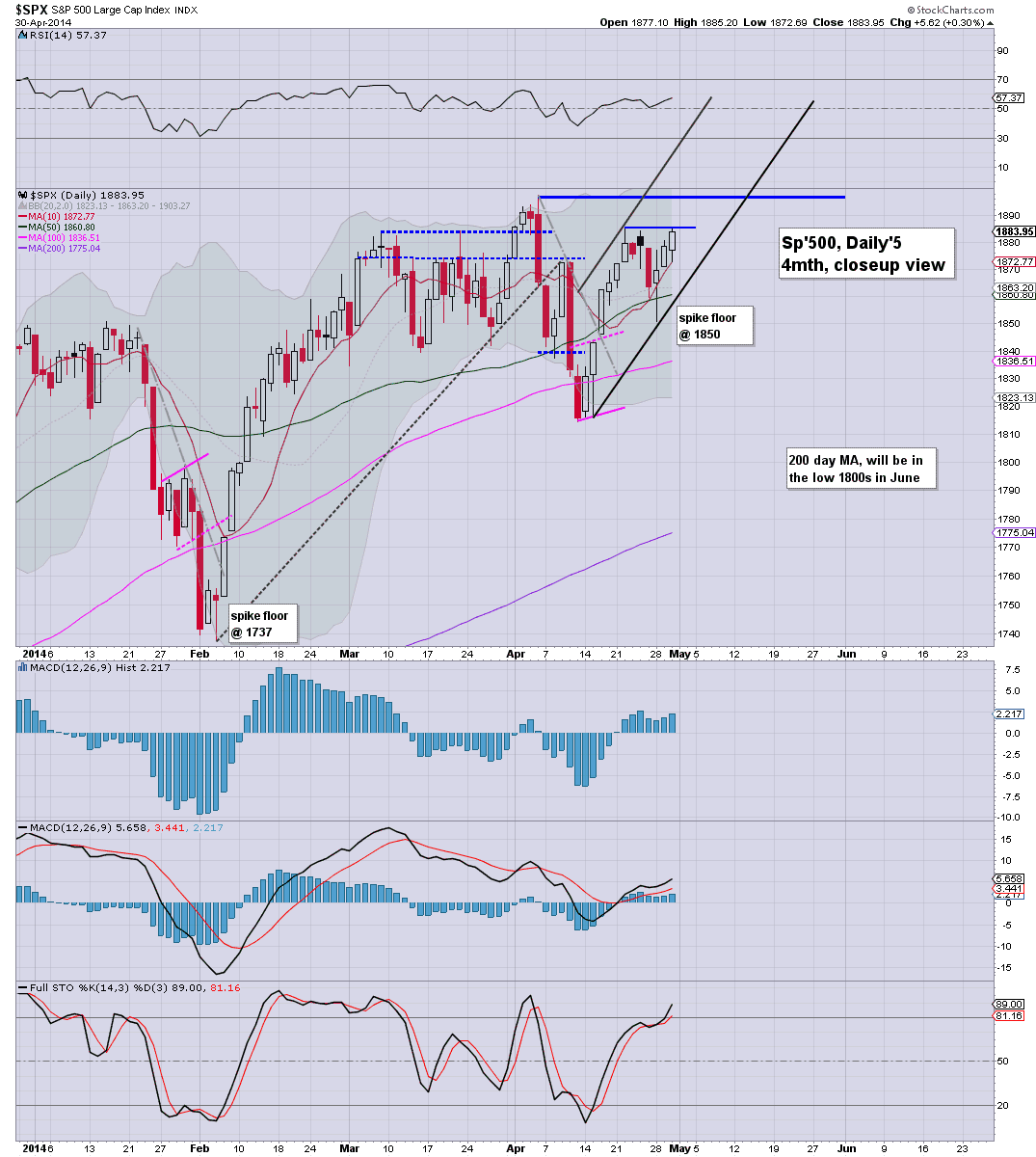 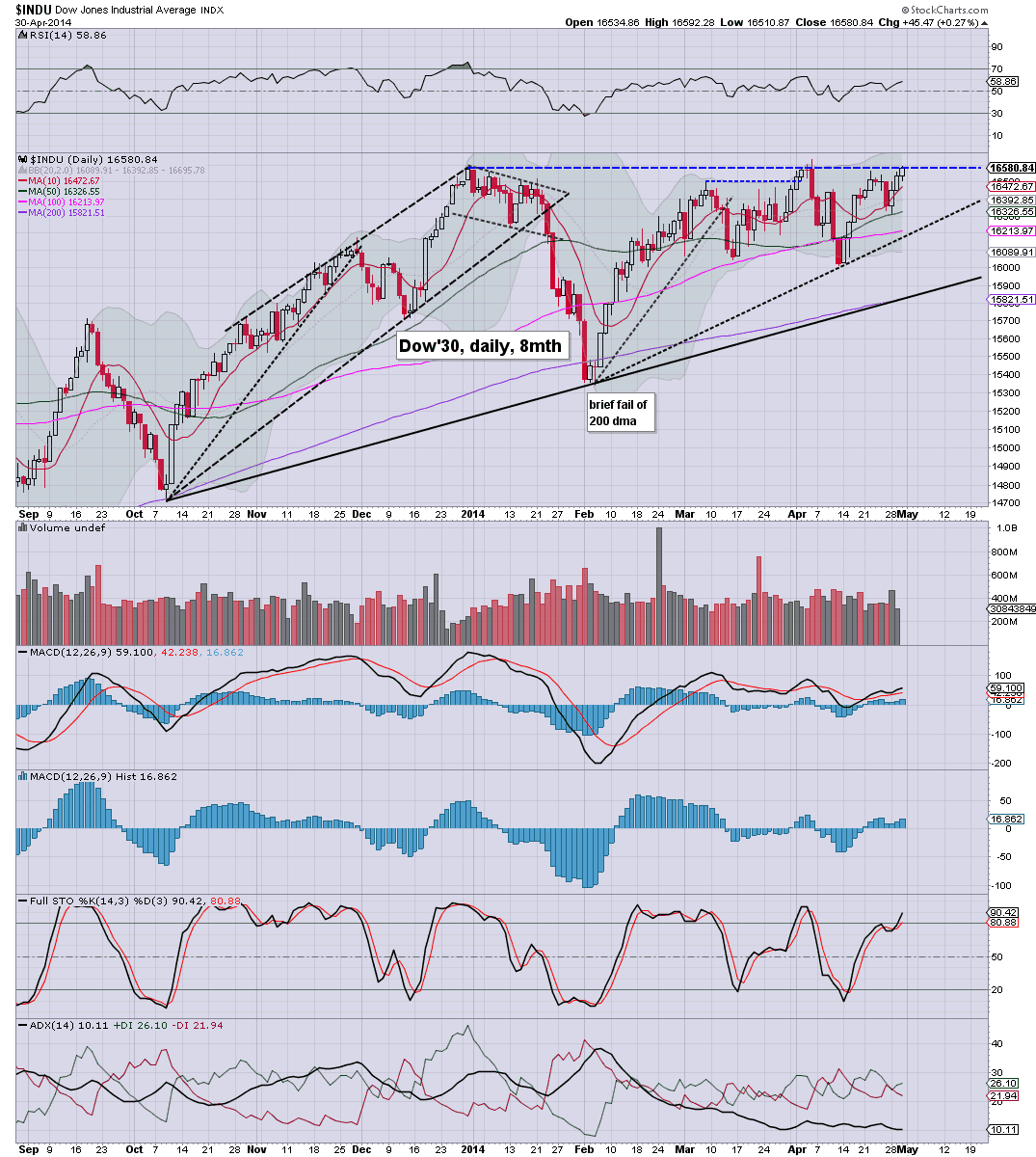 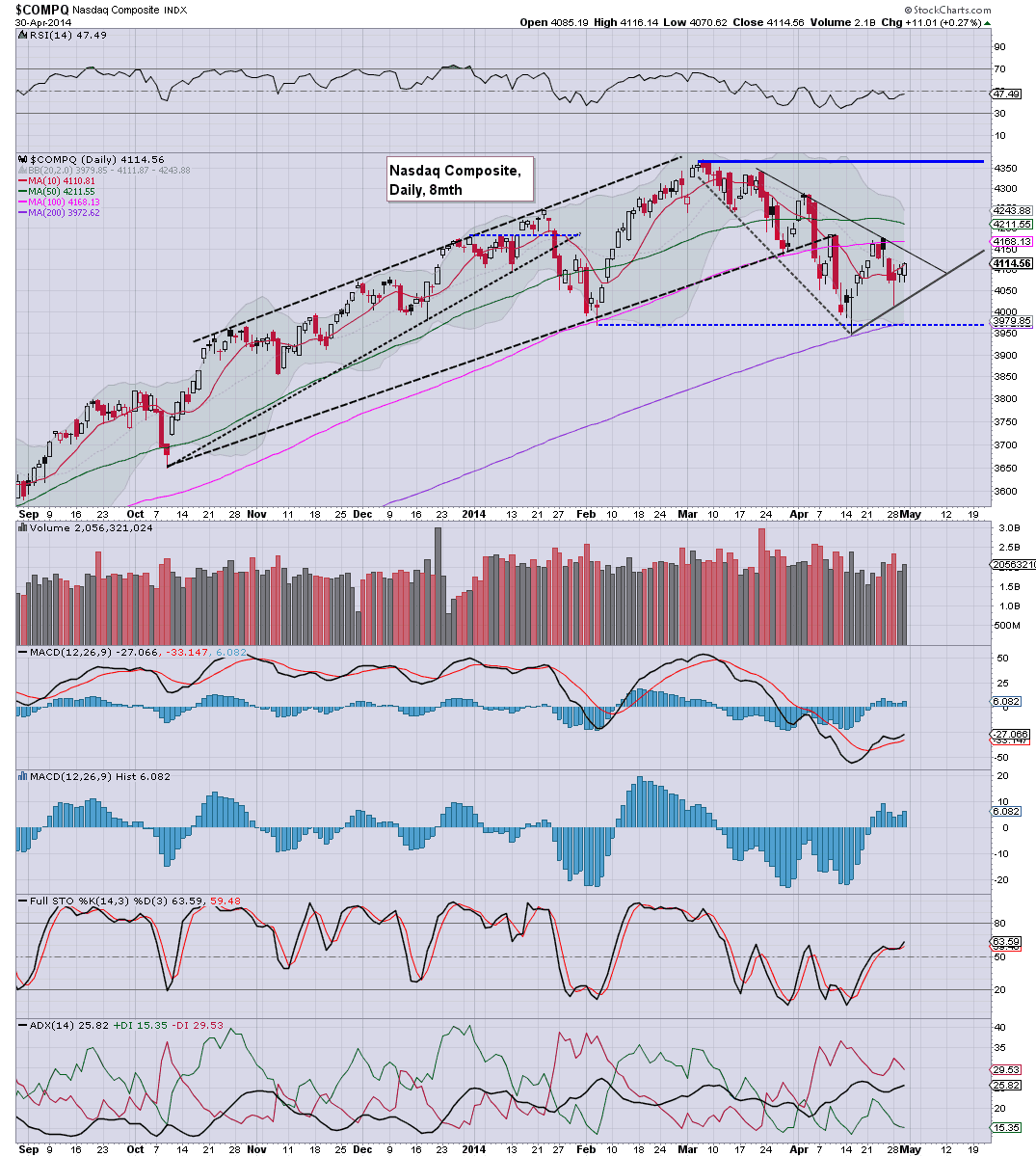 Suffice to say, the Monday spike low daily candle is arguably a very important one for the equity bears to keep in mind. Certainly, it is highly suggestive of a short term floor, and the fact we're already 33pts higher is supportive of it.
--

Both the Dow/SP' look set to close the week at new historic highs.  Whether the R2K/Nasdaq will break new highs in May, that remains a key question.
-