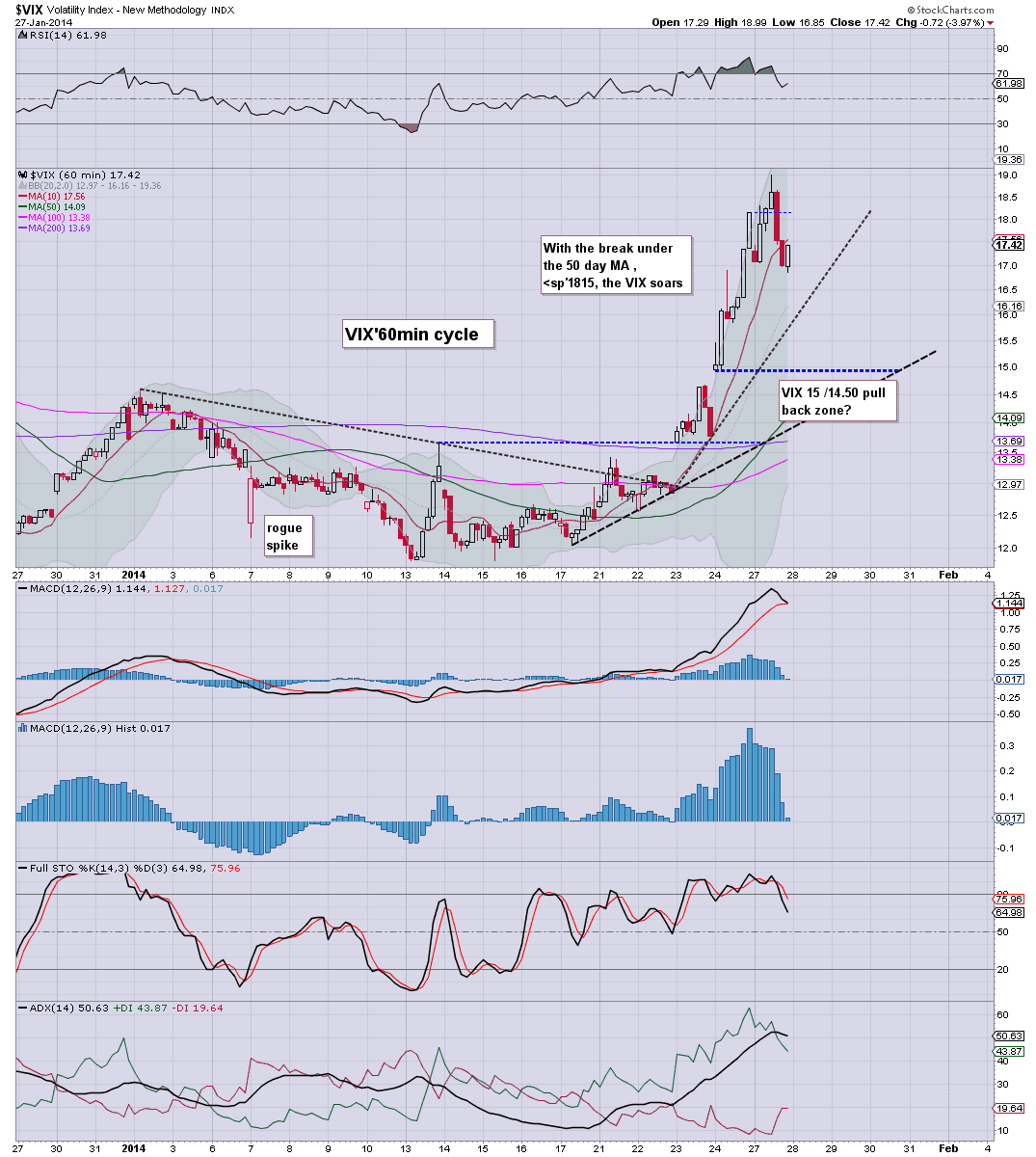 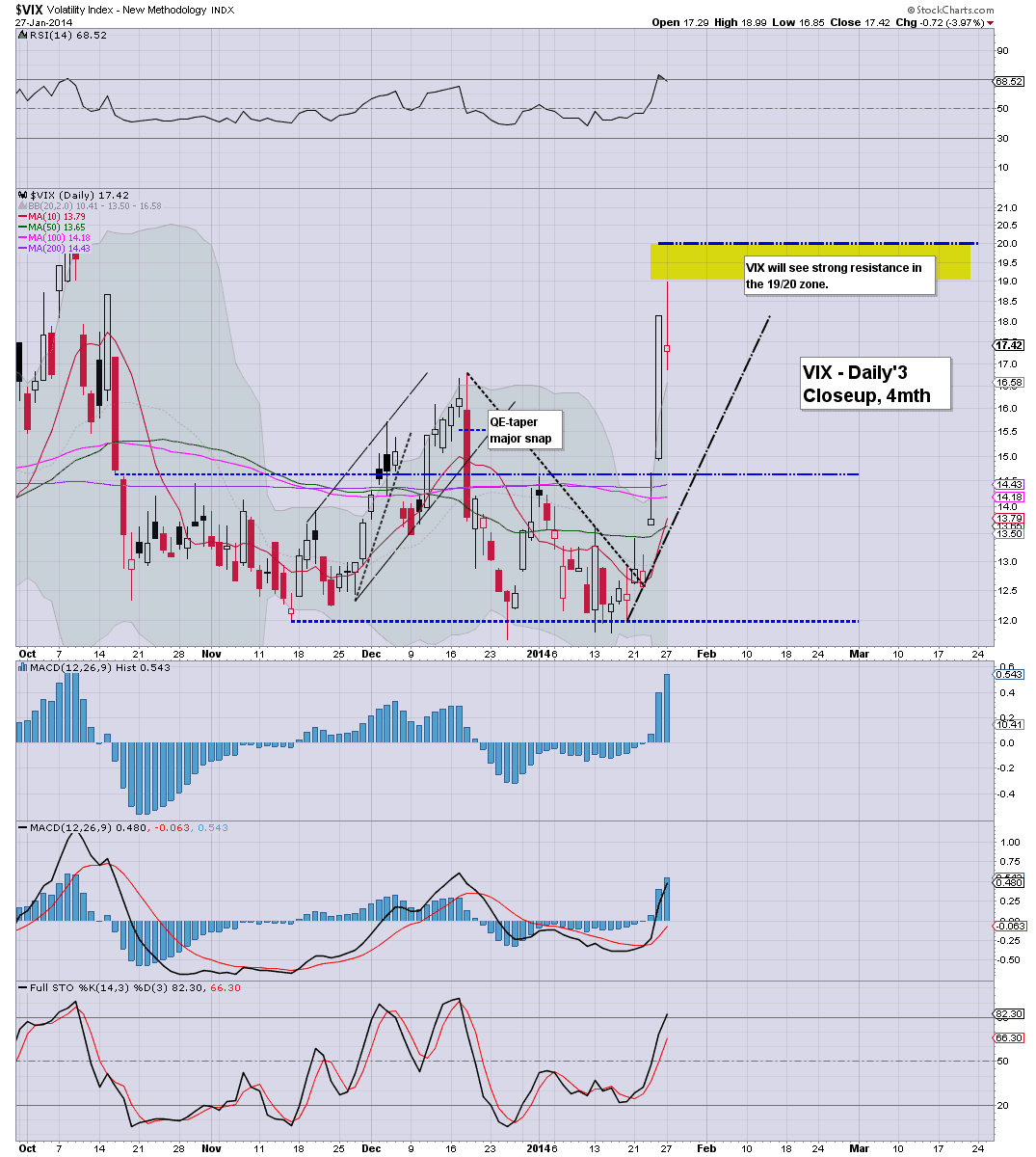 One of the most notable aspects of today was the action in the VIX. Despite the market lower in the morning, it wasn't until the sp' slipped 10pts that the VIX finally turned positive. Even then..with sp'17/18pts...to 1772..the VIX didn't quite manage the 19s.

The daily chart is pretty clear...we have resistance in the 19/20 zone, and it will likely take a drop below sp'1765 to finally break into the 20s.

Considering the break on the weekly index charts, the VIX 20s do seem viable, but as has been the case for some years...the VIX never stays high for very long. 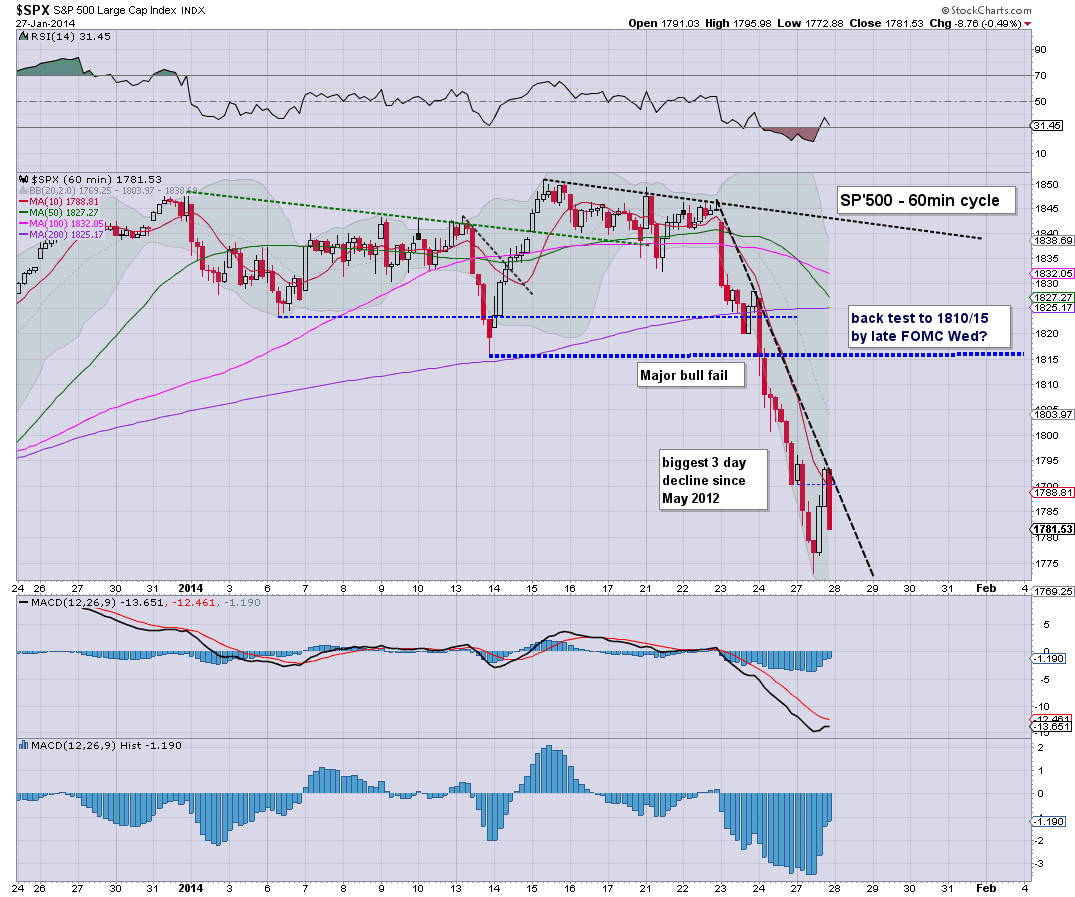 On any basis, a 'natural' bounce zone would be the old broken support in the sp'1810/15 zone. It is hard to guess whether that will be reached tomorrow..or not until Wednesday.

Regardless. the bigger weekly cycles are BROKEN. Bulls...beware!
--
the usual bits and pieces to wrap up the day...across the evening.  :)
-

more later...on the VIX.
Posted by Trading Sunset at 21:02:00
Email ThisBlogThis!Share to TwitterShare to FacebookShare to Pinterest

We have a pretty clear reversal..at least in the short term. There is natural bounce upside to the sp'1810/15 zone..which will likely equate to VIX 15/14.50. That will make for a rather interesting re-short opportunity. Metals remain weak, Gold -$14 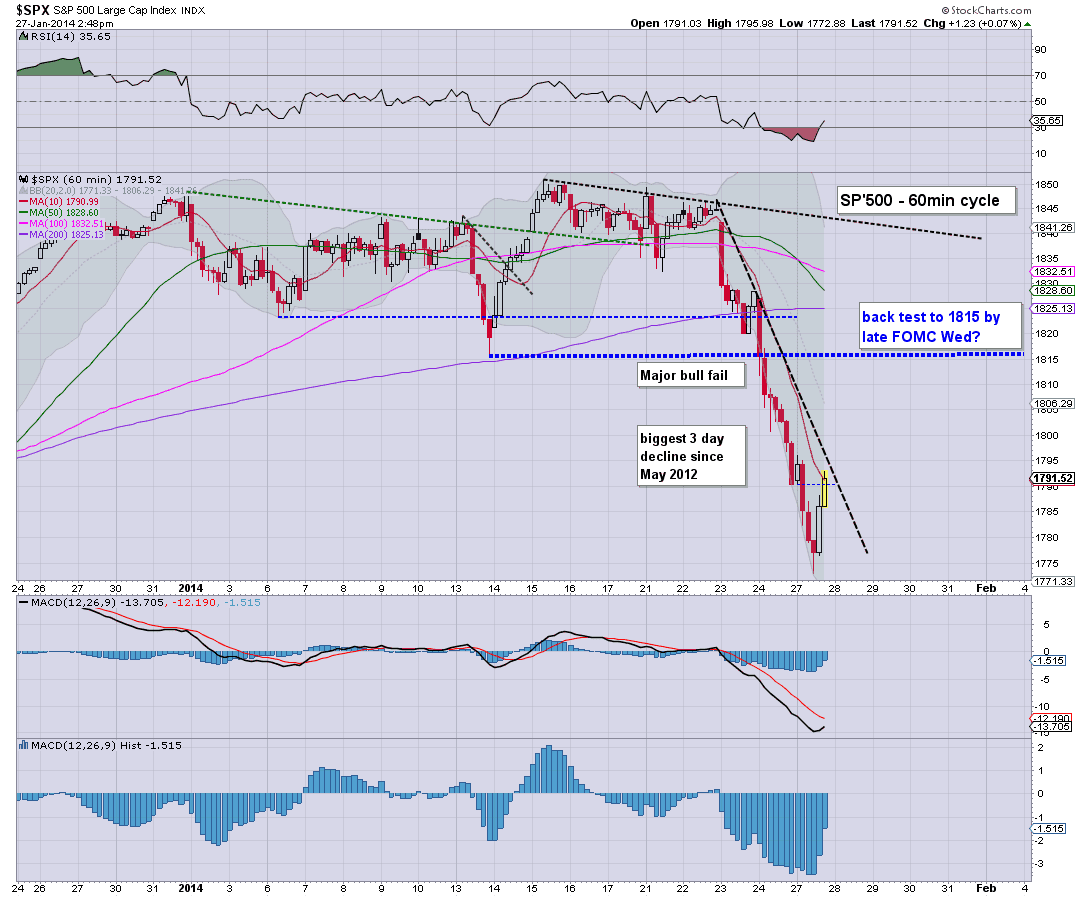 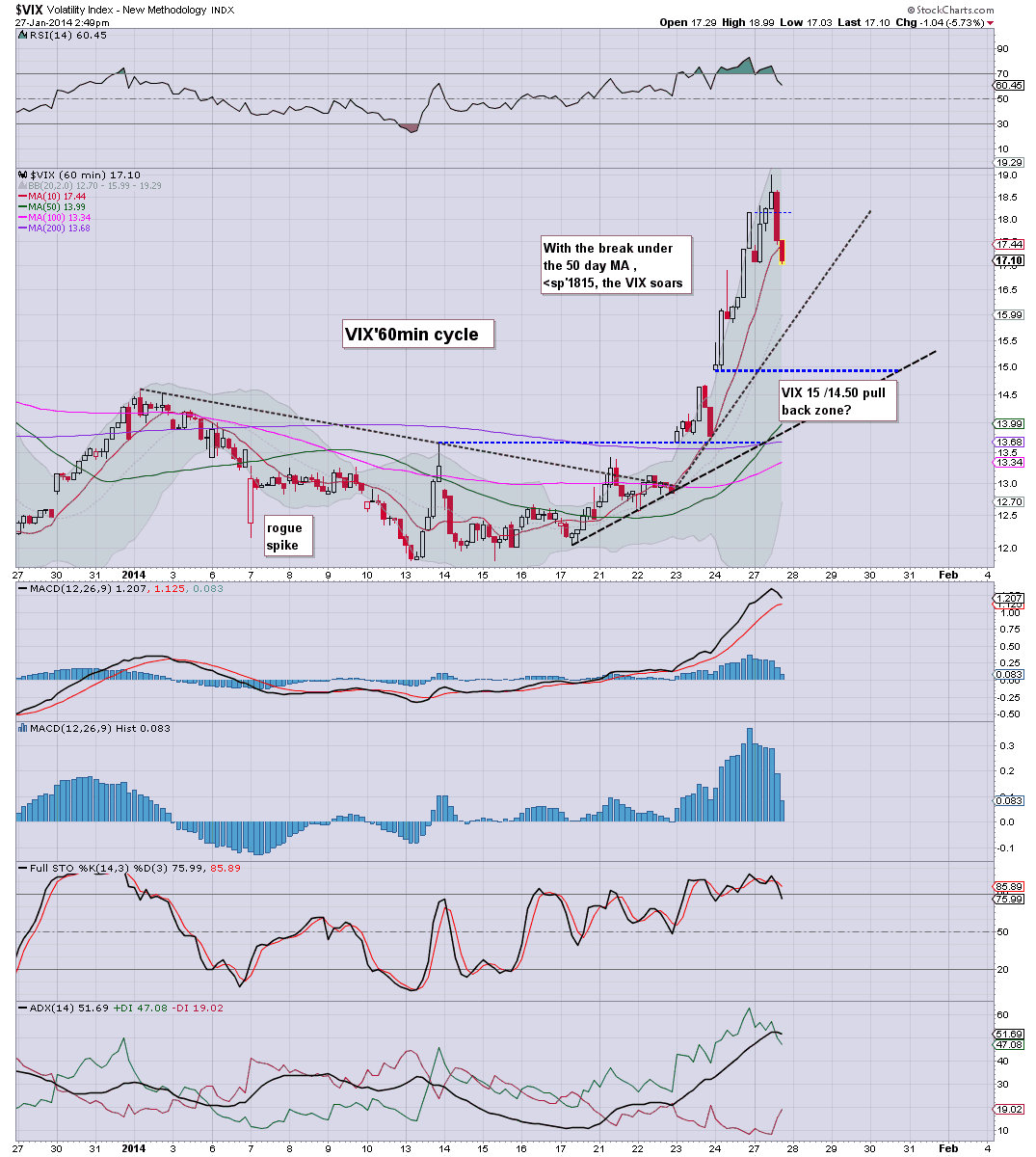 We have breaks of short-term trend on the VIX..and sp' hourly charts.

As ever...it is more important to keep in mind the bigger weekly/monthly cycles - the former of which have now seen conclusive downside breaks.

...updates into the close...and after (AAPL earnings will be kinda interesting to see)
--

3.17pm... the following is the semi-bearish outlook...it'd still offer a hit of the lower weekly bol', but not for a few weeks. 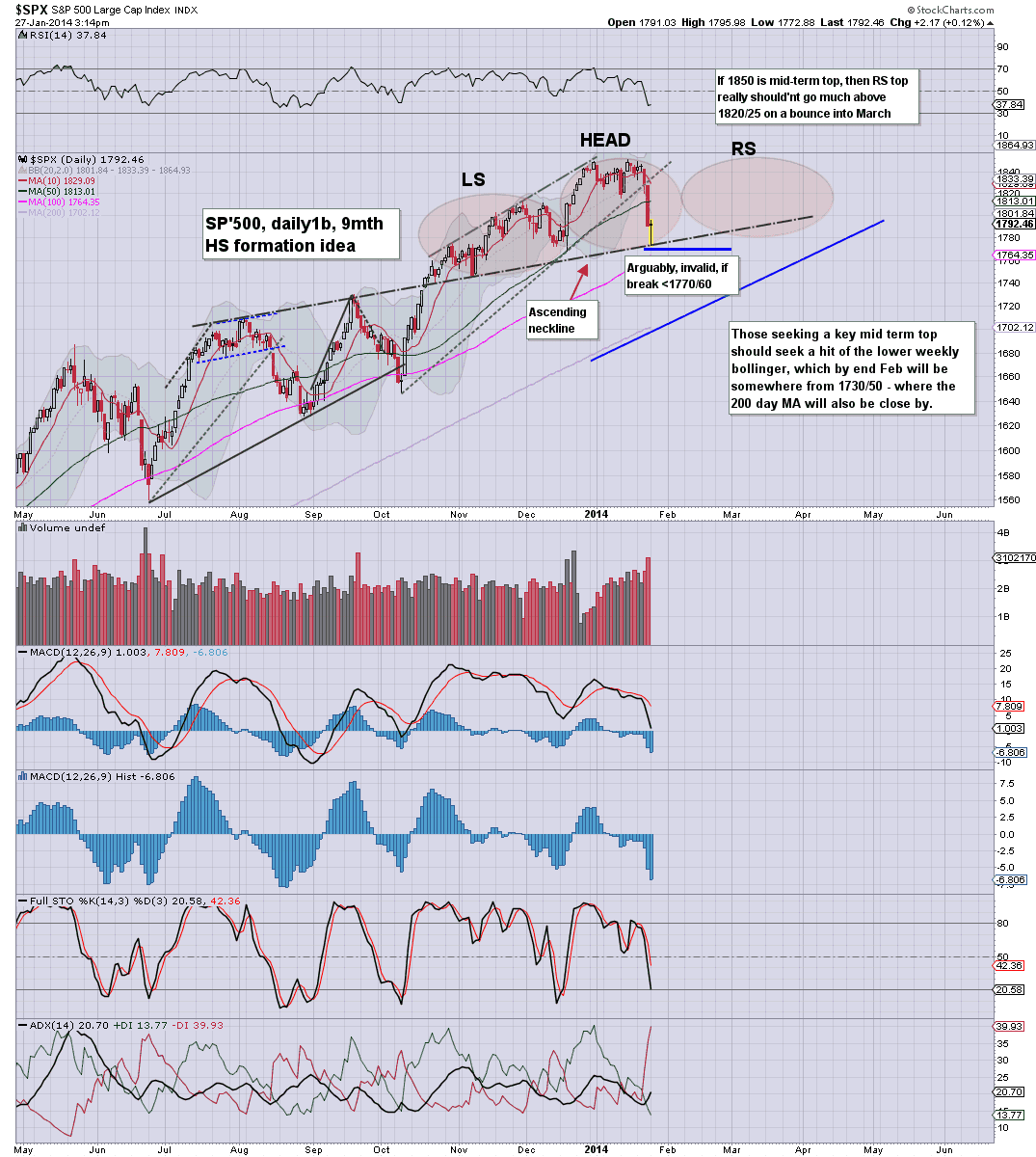 The fact there is sig QE-pomo tomorrow should concern anyone still holding short.

For the equity bears seeking major downside, a weekly close in the 1780s...or lower will be pretty important. Just need one major down day...Thursday..or Friday.

*AAPL earnings will be released at 4.30pm.

back at the close.
Posted by Trading Sunset at 19:51:00
Email ThisBlogThis!Share to TwitterShare to FacebookShare to Pinterest

2pm update - due a dumb bounce

Having slipped from sp'1846 to 1772 across just 3 trading days, we're more than due a bounce, with sp'1810/15 being a natural zone for the market to get stuck and rollover again. VIX looks maxed in the upper 18s. Metals remain weak, Gold -$8 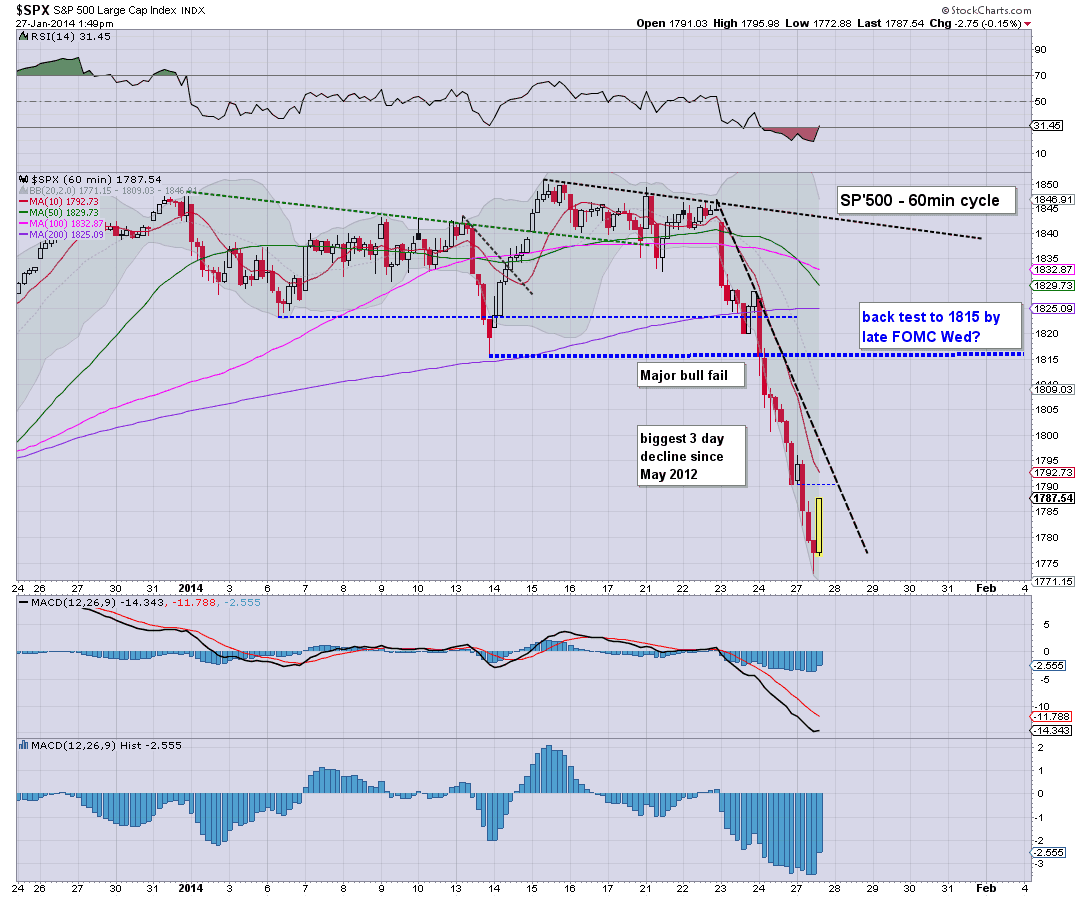 A re-short in the 1810/15 zone by late Wednesday would make for a particularly easy trade, considering the breaks in the weekly charts.
-

Metals are slipping away - as the market bounces... Gold -$13
Posted by Trading Sunset at 18:49:00
Email ThisBlogThis!Share to TwitterShare to FacebookShare to Pinterest

The third day of significant weakness for US equities. Arguably, most illustrative of the weakness are the weekly charts where we have clear breaks on all the indexes. The huge ramp from Nov'2012..is over. Metals and Oil remain weak..whilst the VIX is making a play for the 19/20 zone. 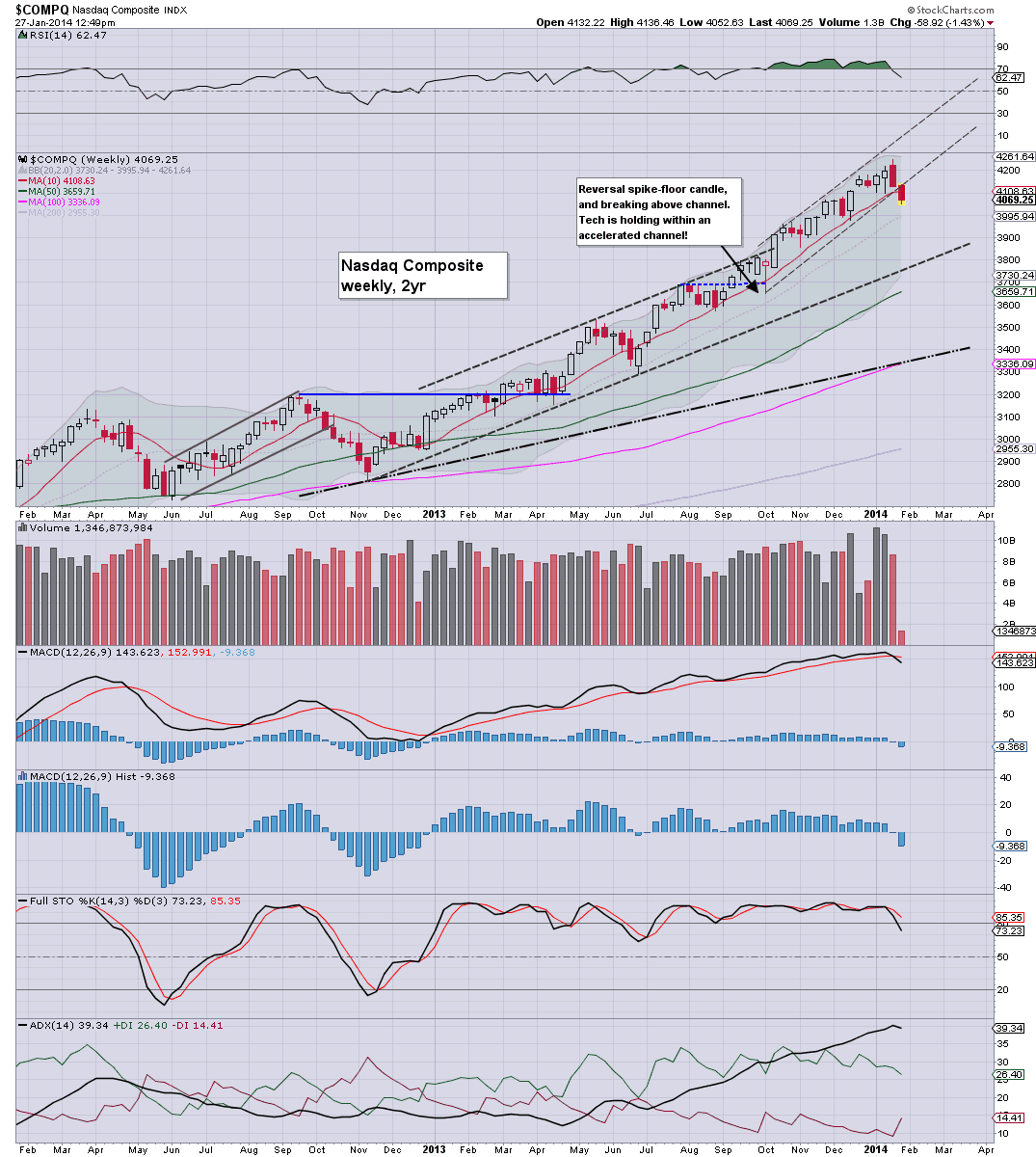 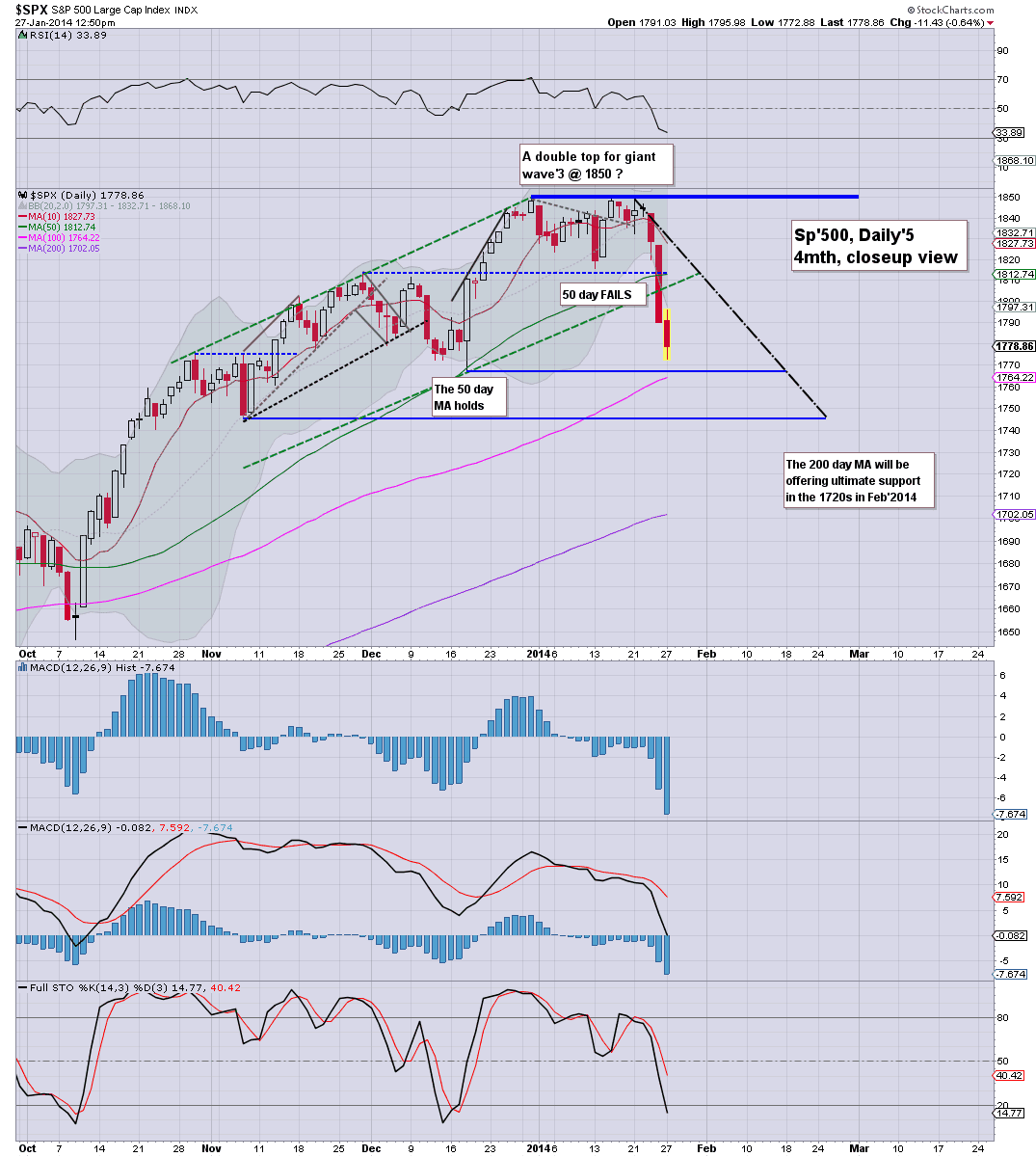 
The Nasdaq weekly tells the story..the huge ramp from Nov'2012 is broken...there is NO doubt now. The break opens up a hit of the lower weekly bollinger..equivalent to the low sp'1700s.

There is clearly risk of an FOMC bounce..but there is now VERY high risk things will unravel this week..all the way to the low sp'1700s.

Arguably..short-side day trading bears should have made a run for it in the past hour.

A fair question right now..who fears the Yellen across Tue/Wednesday?
Posted by Trading Sunset at 17:52:00
Email ThisBlogThis!Share to TwitterShare to FacebookShare to Pinterest

Mr Market is fighting hard to find a short term floor - in the 1780/70s, in order to begin some degree of significant bounce..back into the low sp'1800s. Metals remain weak, Gold -$7, whilst Oil reflects the broader market, -1.0%. Despite weak equities, VIX is fractionally lower. 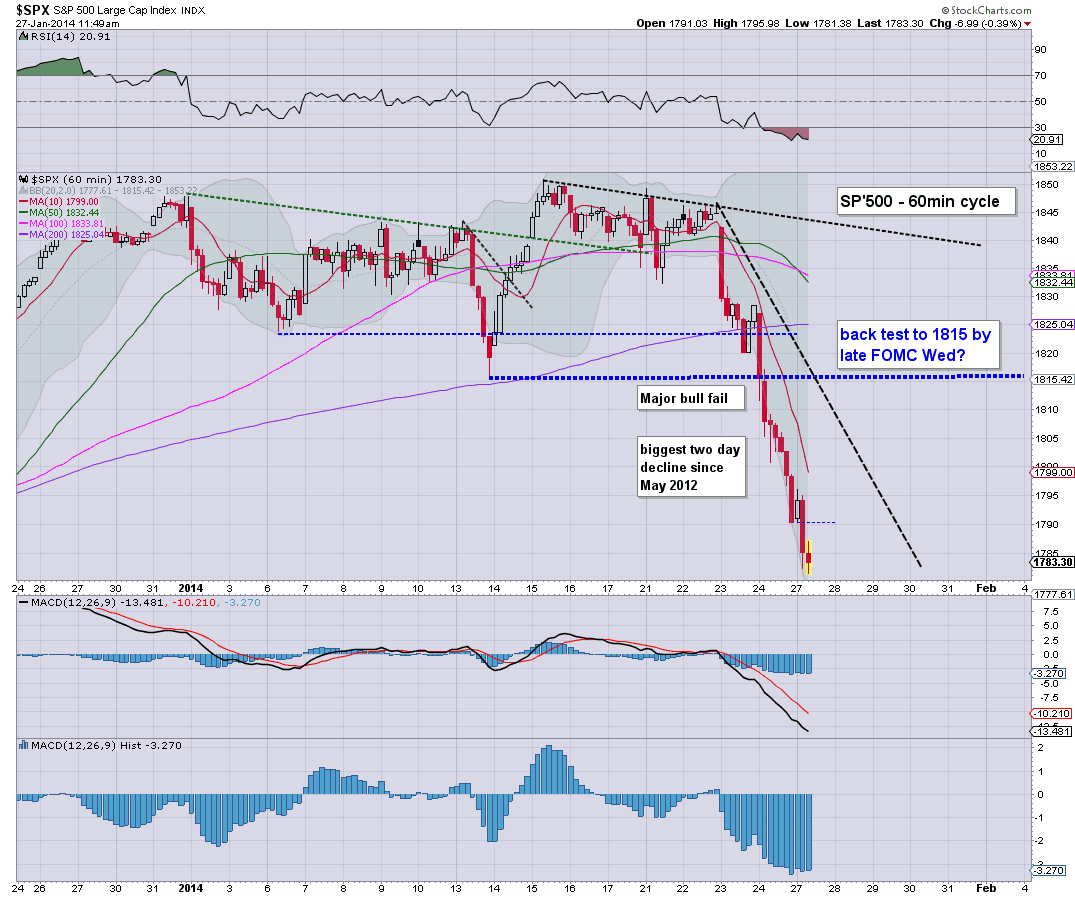 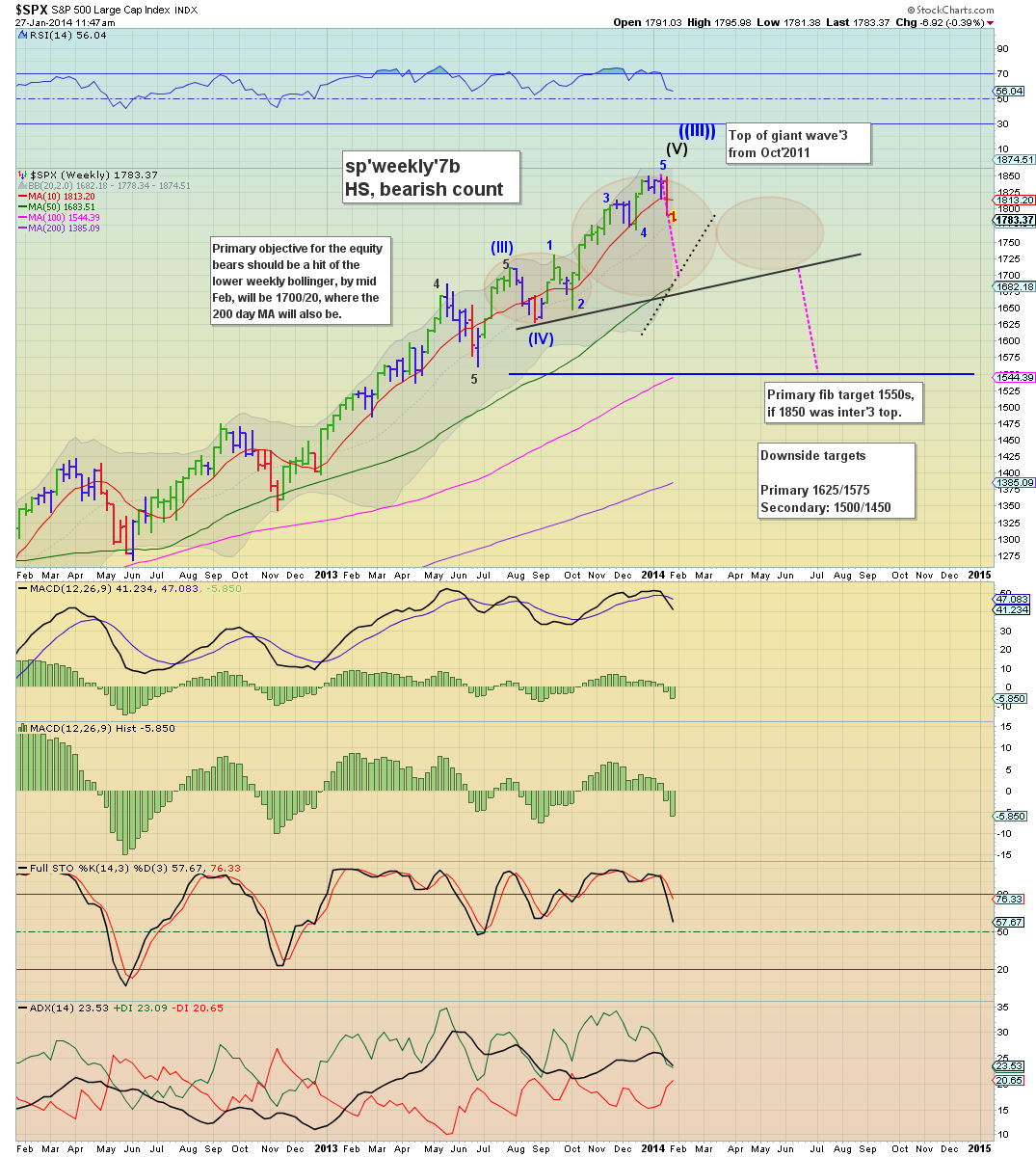 *weekly7b' is the most bearish outlook I can come up with right now, and as I will be noting...if 1850 is a key intermediate top, then in theory (based on previous big cycles) we should hit the lower weekly bol..currently 1682..but rising 10/15pts a week.
--

It is notable that despite the lower indexes...VIX is moderately red.

Bears are getting a chance to tighten stops here...considering King O' is talking tomorrow..with sig' QE-pomo, and then Yellen on Wednesday....

Be careful out there! 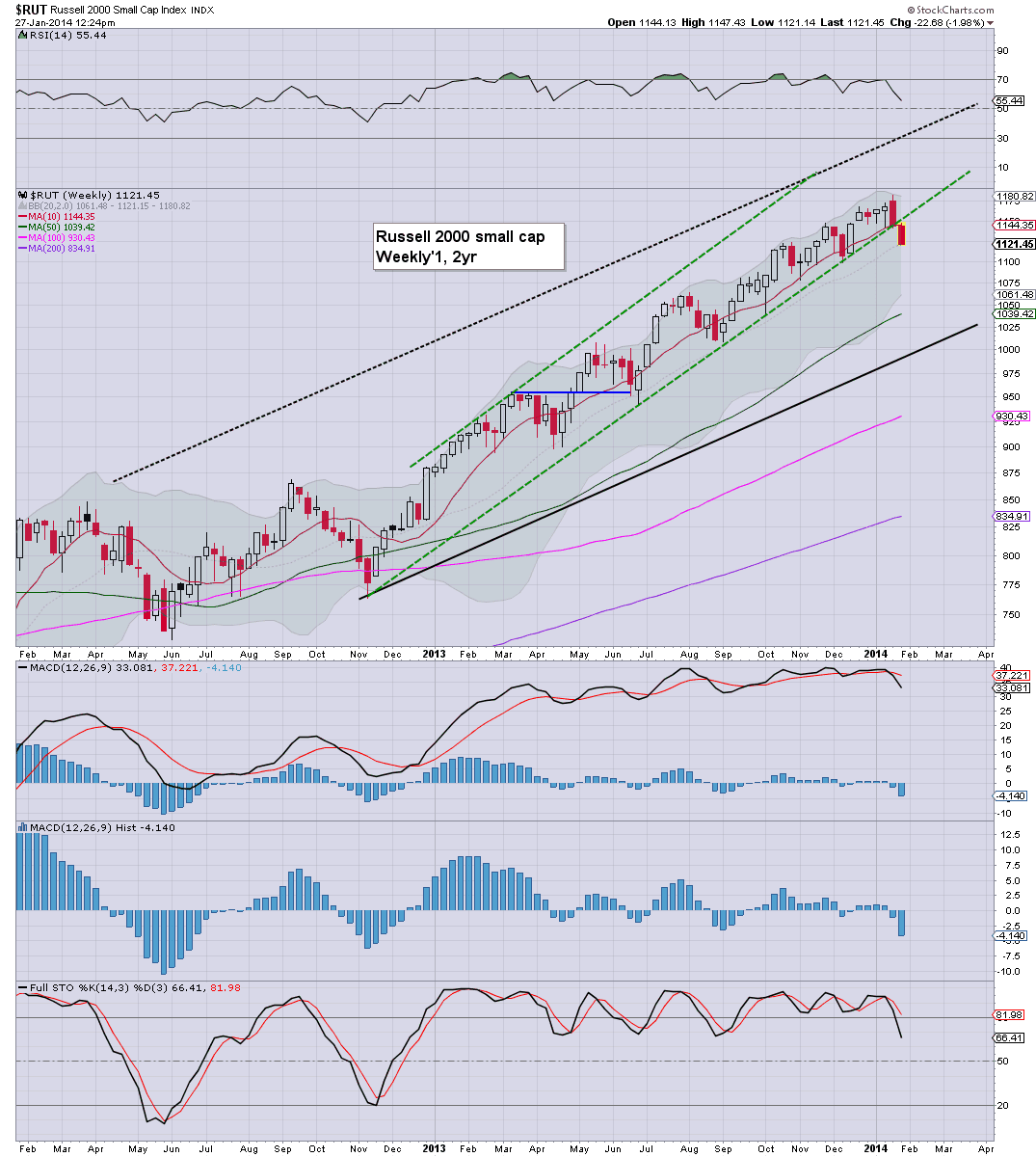 Target IS the lower weekly bol..which would indeed equate to sp'1720/00 within no more than a few weeks.
Posted by Trading Sunset at 16:51:00
Email ThisBlogThis!Share to TwitterShare to FacebookShare to Pinterest

Whilst the main indexes are on the slide again - after failed opening gains,  there is particular weakness in the momo stocks, with FB and TWTR both seeing very significant declines of -7% and -3.5% respectively. Metals are weak, Gold -$8, with Oil -0.8% 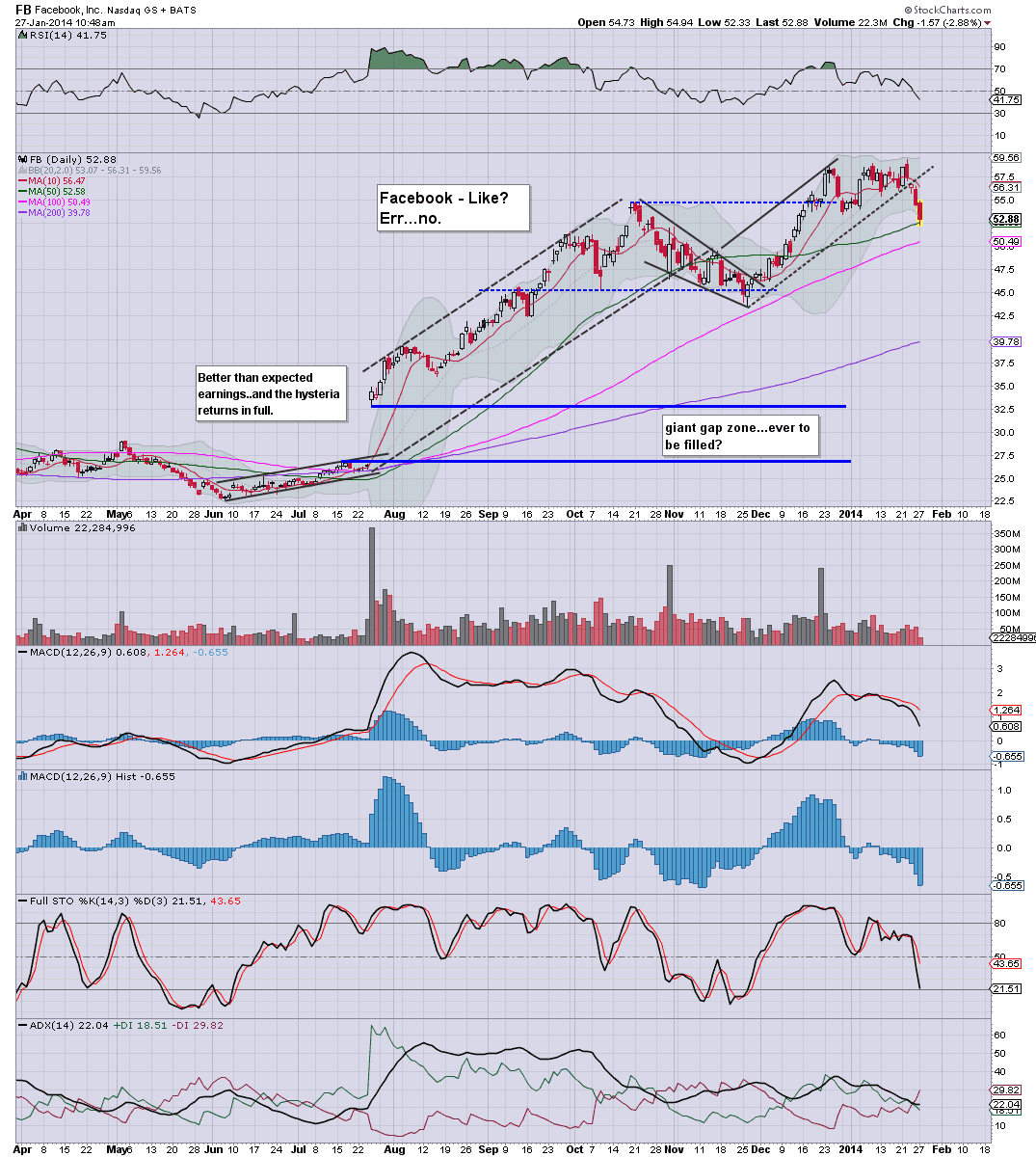 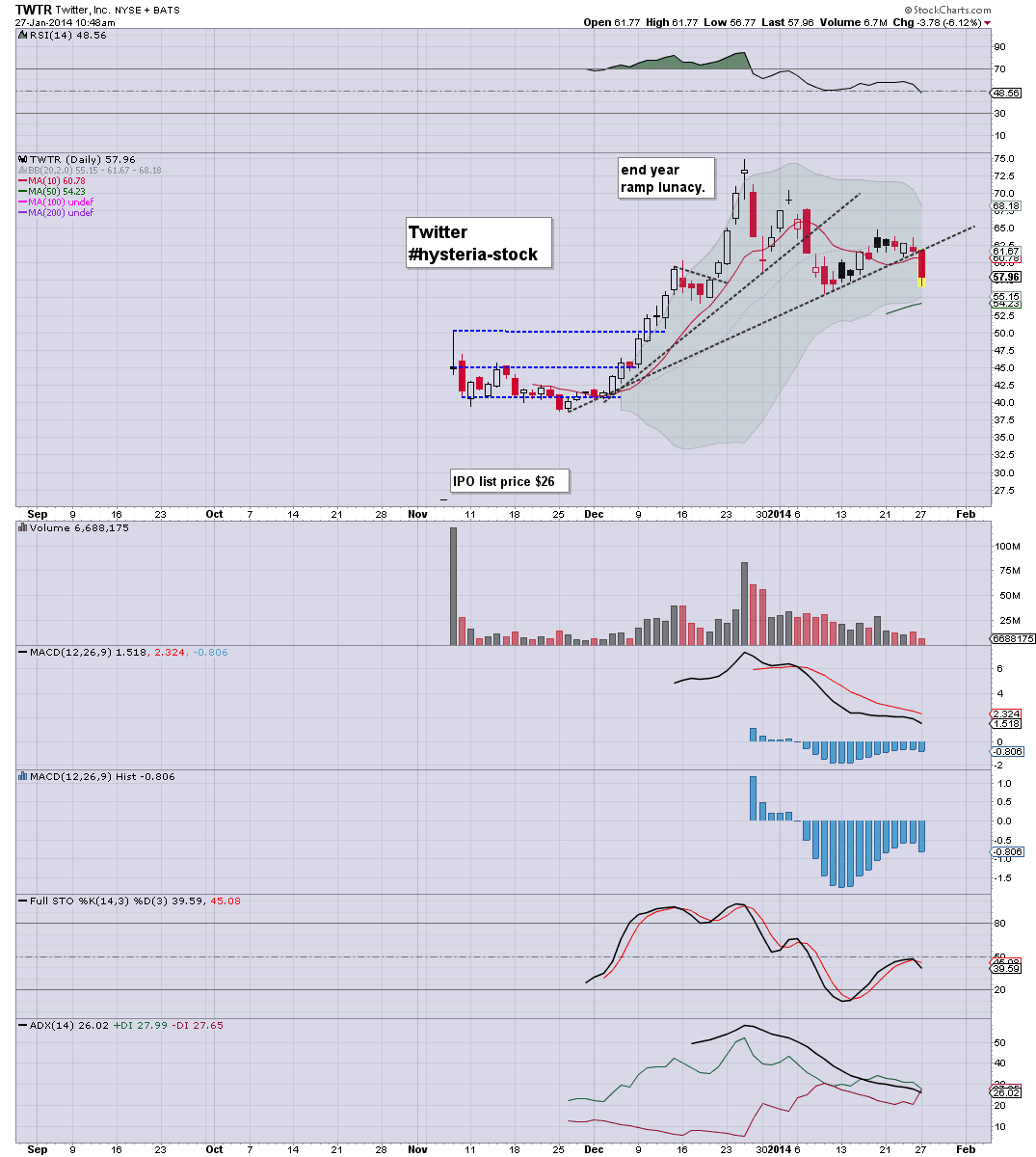 Clearly, there are still a lot of momo bulls who need to get rattled out of their positions.
--

VIX is trying to turn positive..but as many recognise..there is strong resistance at the 200 MA on the weekly cycle - in the 19s.


11.18am..first sign of a turn...bears highly vulnerable to a sig' bounce..as high as 1810/15..but that would no doubt take at least 2-3 days to achieve.
Posted by Trading Sunset at 15:50:00
Email ThisBlogThis!Share to TwitterShare to FacebookShare to Pinterest

The indexes open moderately higher, and considering the Friday drop, this is a particularly weak open. There is still a very viable drop to the 1780/70 zone, before a significant bounce. Precious metals are weak, Gold -$10. VIX is on the slide...-5%..back in the 17s. 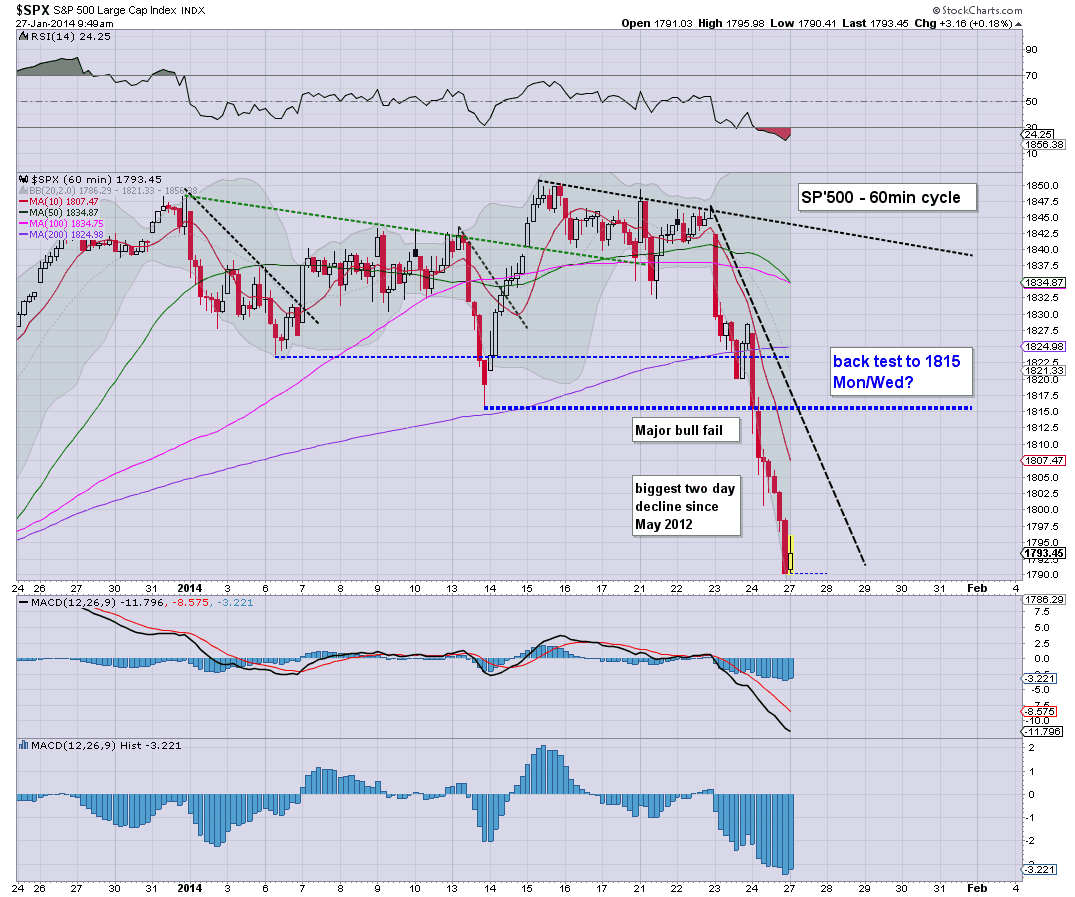 The second red 'rainbow' candle on the weekly chart...and we've not seen that since Nov'2012. Unquestionably...the style of trend we saw across all of 2013 is...over. Bears really need to be cautious here..and despite what some were touting over the weekend, this is no 'crashy Monday'.

TWTR..-6.5%.....what a crying shame to see that.
Posted by Trading Sunset at 14:53:00
Email ThisBlogThis!Share to TwitterShare to FacebookShare to Pinterest

Good morning. Futures are moderately higher, sp + 5pts, we're set to open around 1795. Precious metals are lower, Gold -$7. Equity bulls (for once) face real problems on any bounce early this week, where there will be strong resistance in the 1810/15 zone. 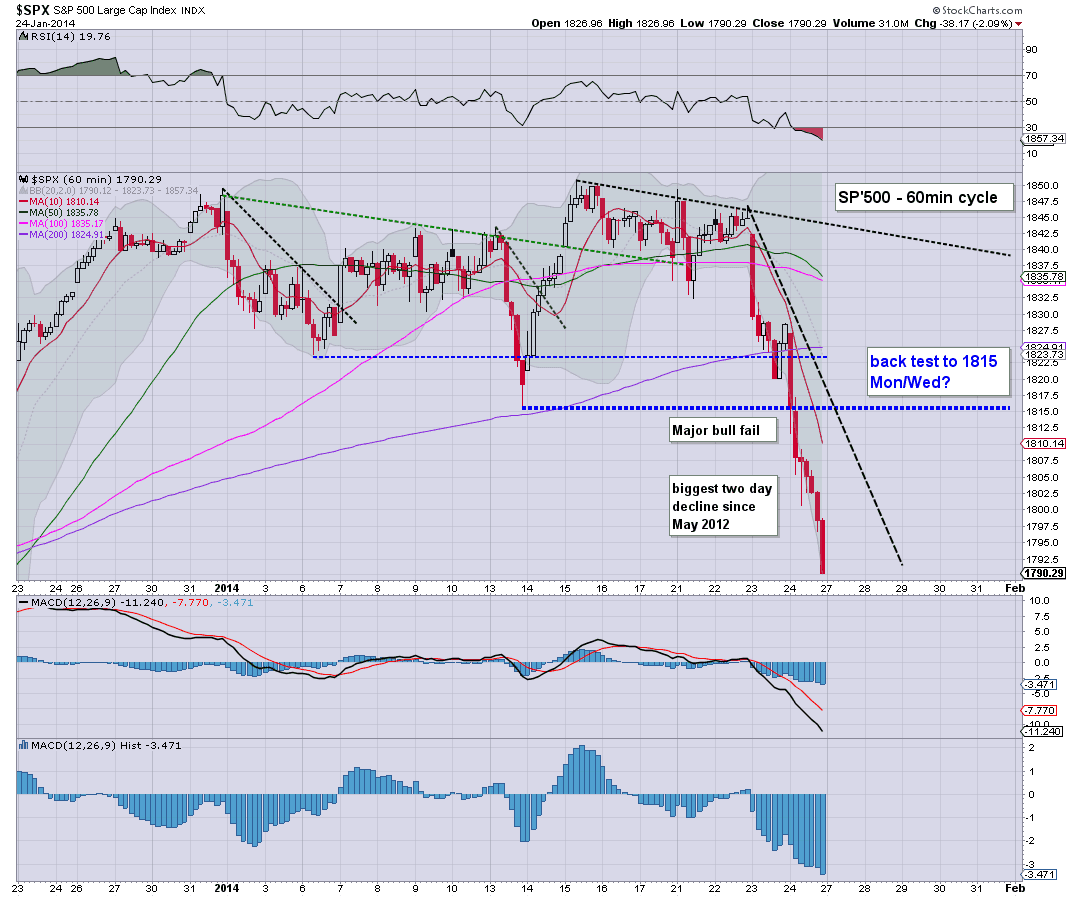 So...we're set to open a little higher, but really, 5pts is a micro move.

I suppose any minor bounce this morning of 5/10pts could be labelled a micro'4 - in relation to last Fridays rather clear 3' (of whatever degree).

Obviously, bears face risk of a sizable bounce between now and the FOMC announcement this Wednesday (2pm).

The following is something that a fair few have also noted this past weekend.. 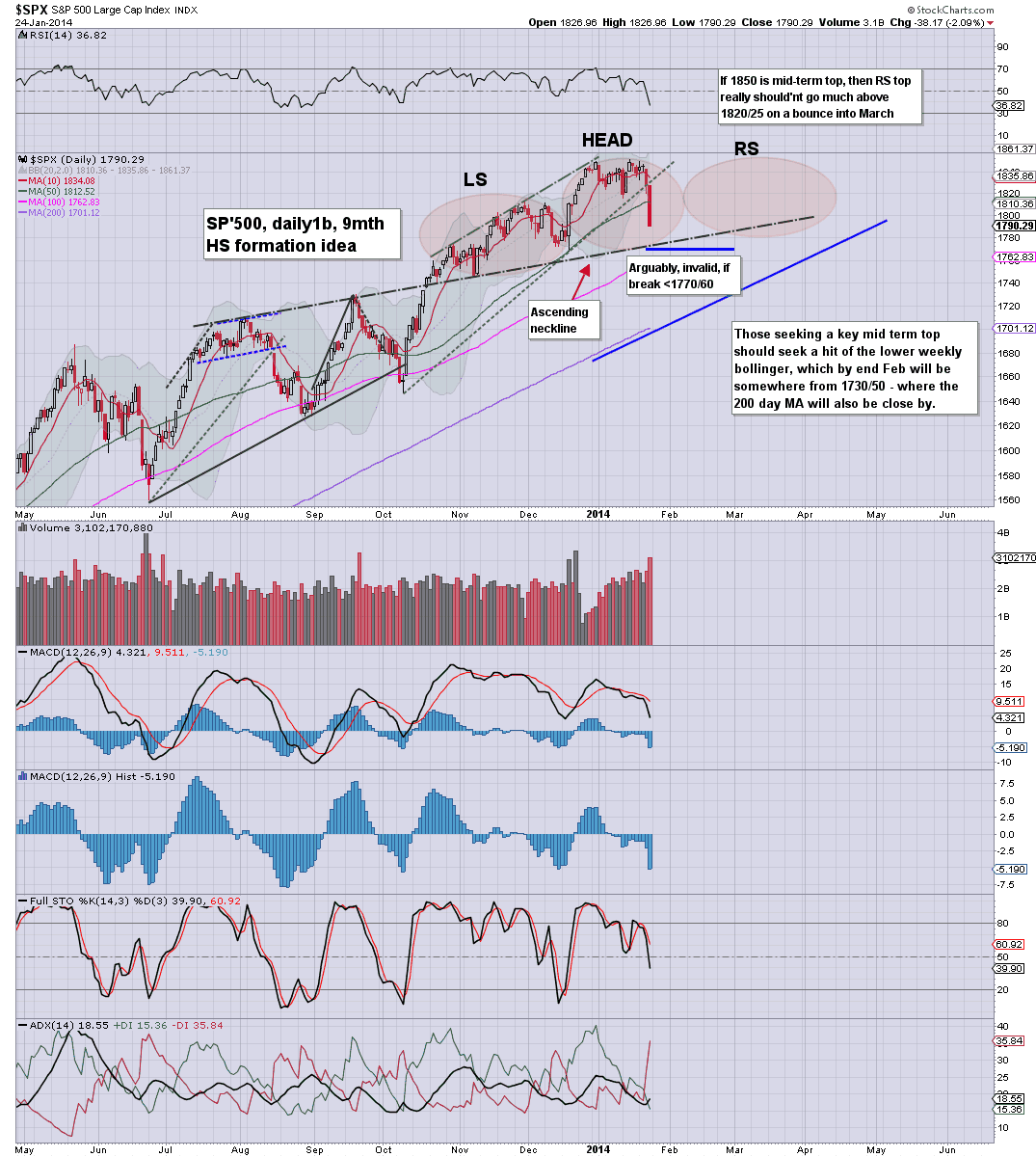 Anyone holding short whilst the market is in the 1780/70s is going to need to be real careful, mindful of a bounce that might be 40/50pts..with a VIX that could slip from 19/20...down to the low teens.

'Don't fall in love with the downside'. Hmm. Oscar has a point, but as I noted at the weekend, the weekly charts sure don't look good right now. The power, and style in which we closed Friday was very bearish, and bodes for at least 1780 this week.
-

9.16am.. market sure looks weak in pre-market..with the opening gains of just 2-3pts now.