Another week over, moderate index gains

With no sell side volume, the algo-bots are in control of this market. The meltup...continues. 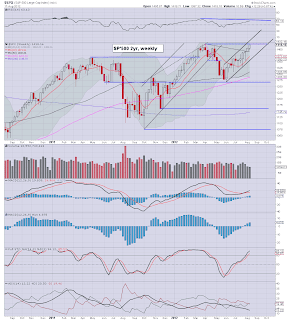 We're now just 4pts shy of the April peak of Sp'1422. It is a pretty astounding sight.

Double top? That is indeed something that many are now considering, although I think its a low probability outcome, especially when you consider that we still have both the infamous Bernanke @ Jackson Hole, and also the FOMC of Sept'13th.

There remain so very many ticking economic time bombs out there, but for now..they all seem to have plenty of time left on the detonator clock.

Clearly, it was a difficult week for the bears. We all have a lot to consider across this weekend. Have a good weekend.

A very quiet day, especially considering it was opex. Lets take a quick look at how the big sp'500 index closed the week. 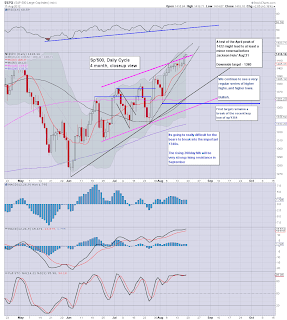 The daily chart is showing an accelerating trend, within what is a clear wedge on the hourly charts, and when you consider the hourly cycle, it'd seem there is a pretty high likelihood of a retracement starting sometime next week..

Yet, a retracement will probably be no lower than 1380.

So long as we don't break below the recent cycle low of sp'1354, the bulls are now firmly in control. Even though buying volume is weak, with no sellside volume at all, the algo-bots are getting an easy opportunity to melt the indexes upward.

There does seem a growing consensus for the sp'500 to max out somewhere around 1455/75 by mid/late September.