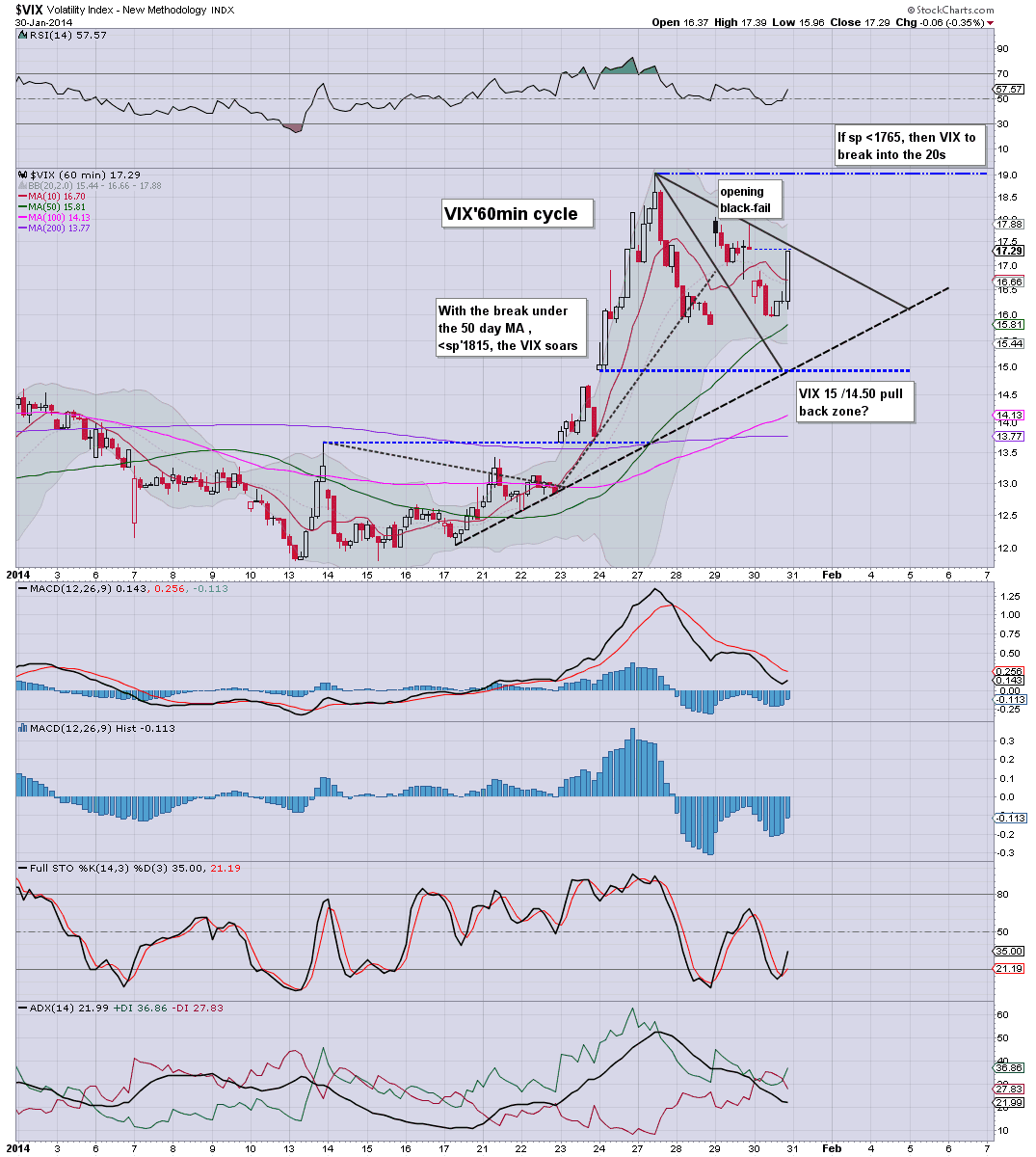 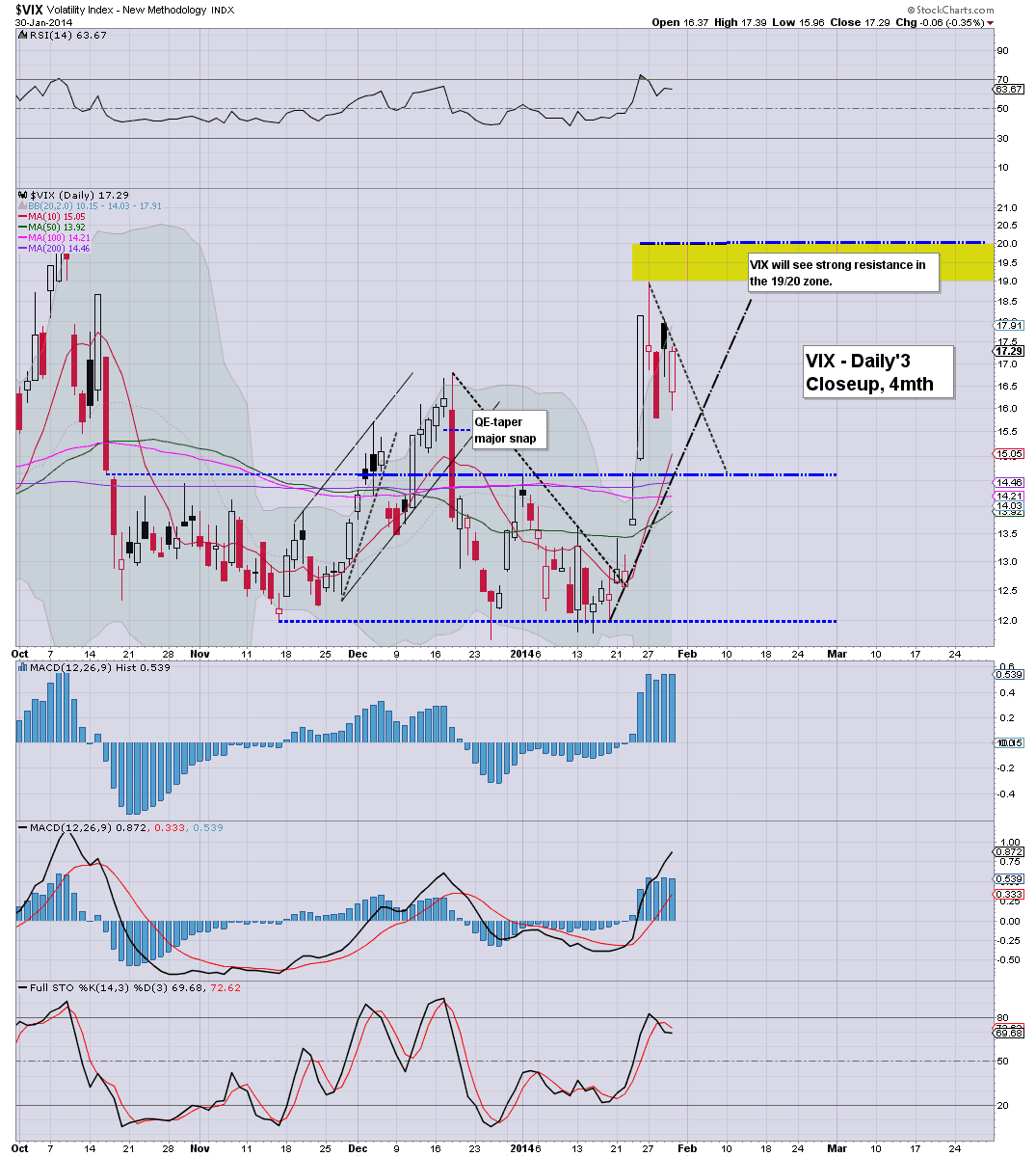 *the closing hour mini surge, and the daily reversal candle, are offering a potential warning, but with $5bn of QE tomorrow, I find it hard to believe the VIX won't continue falling into the weekend.
---

Near term target downside remains 15/14.50..before a renewed surge.

The ultimate issue is whether sp' can put in a daily close <sp'1765, which would likely kick the VIX into the low 20s - for the first time since early October.
- 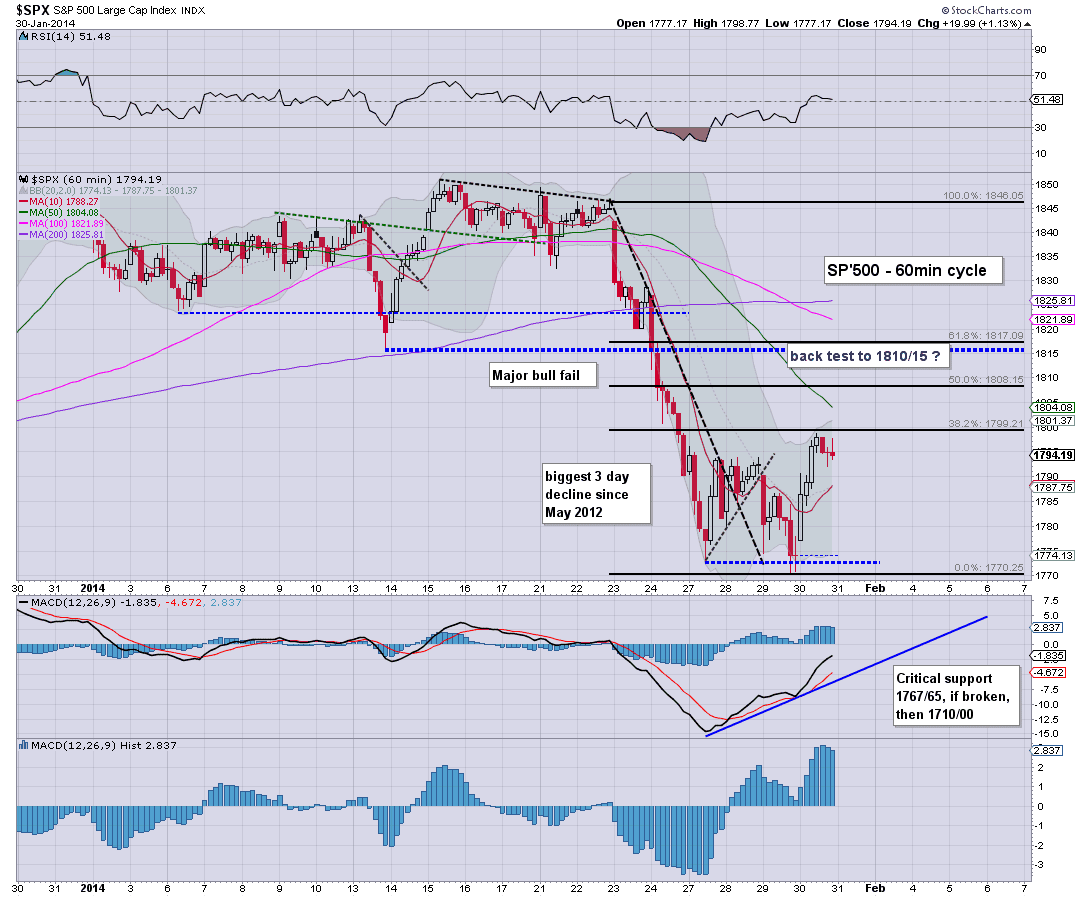 --
the usual bits and pieces to wrap up the day..across the evening.
-

AMZN missed on profits..and the stock has fallen 9/10%..with a recovery to -4/5%
GOOG were roughly in line, and stock is holding +2.5%
Posted by Trading Sunset at 21:02:00
Email ThisBlogThis!Share to TwitterShare to FacebookShare to Pinterest 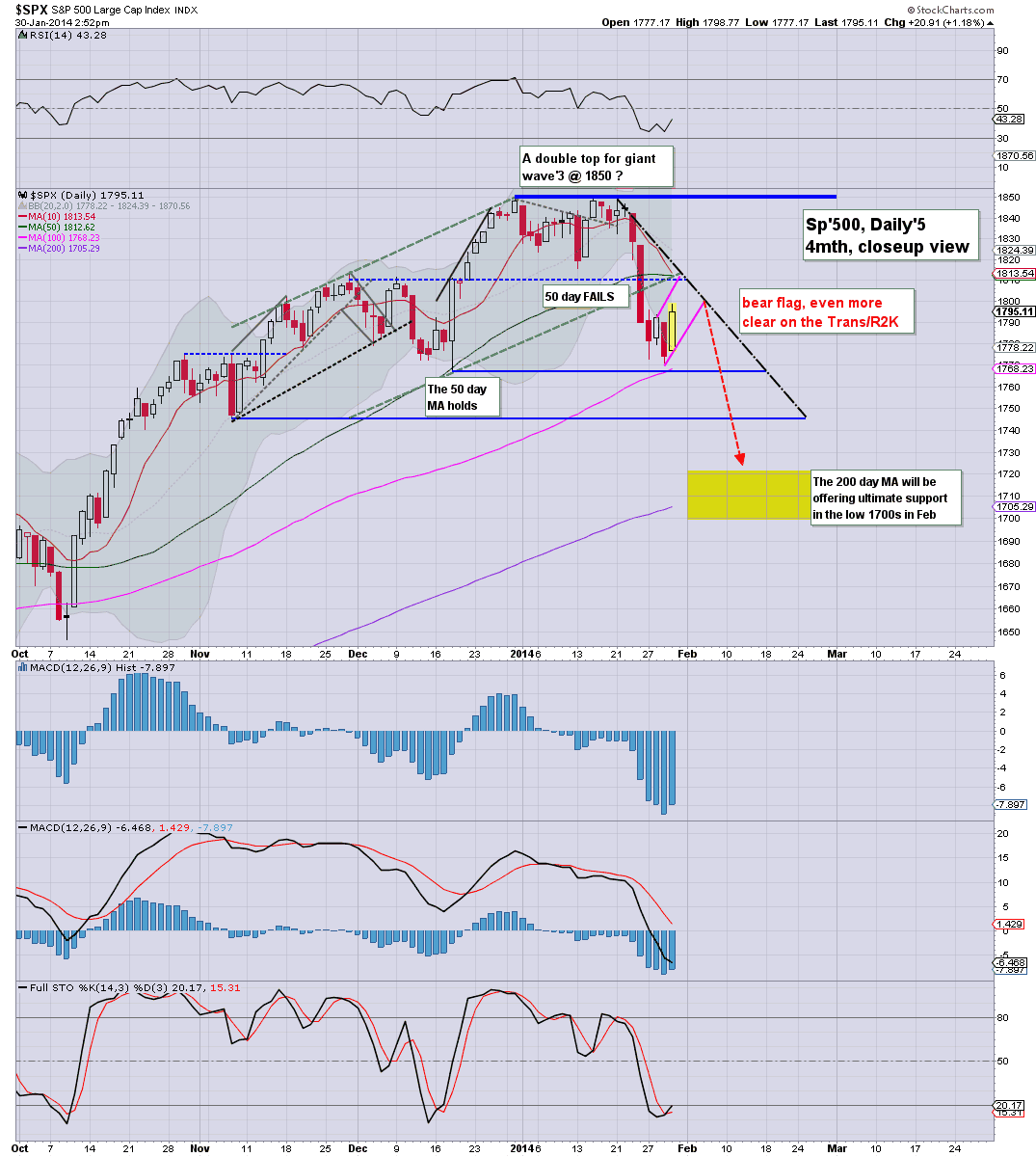 The above chart is probably more than enough right now.

We have one clear bounce day, and more than likely, we'll see some follow through tomorrow.
-

As ever..its all about key support/resistance, the MAs, and QE..of which we have $5bn to endure tomorrow. Bears beware!
--

*AMZN earnings at the close. Did they make any $ this past Christmas?
-

3.14pm... we have a clear baby bull flag on the hourly index charts...bodes for upside into tomorrow.

*AMZN and GOOG earnings at the close..so..stay tuned!
Posted by Trading Sunset at 19:53:00
Email ThisBlogThis!Share to TwitterShare to FacebookShare to Pinterest

The market is holding onto significant gains of around 1.2%, with the sp' in the 1790s. A further day or two to the upside seems likely, before the trembling resumes. Metals remain weak, Gold -$26. VIX is quietly melting lower, -6% in the 16.20s 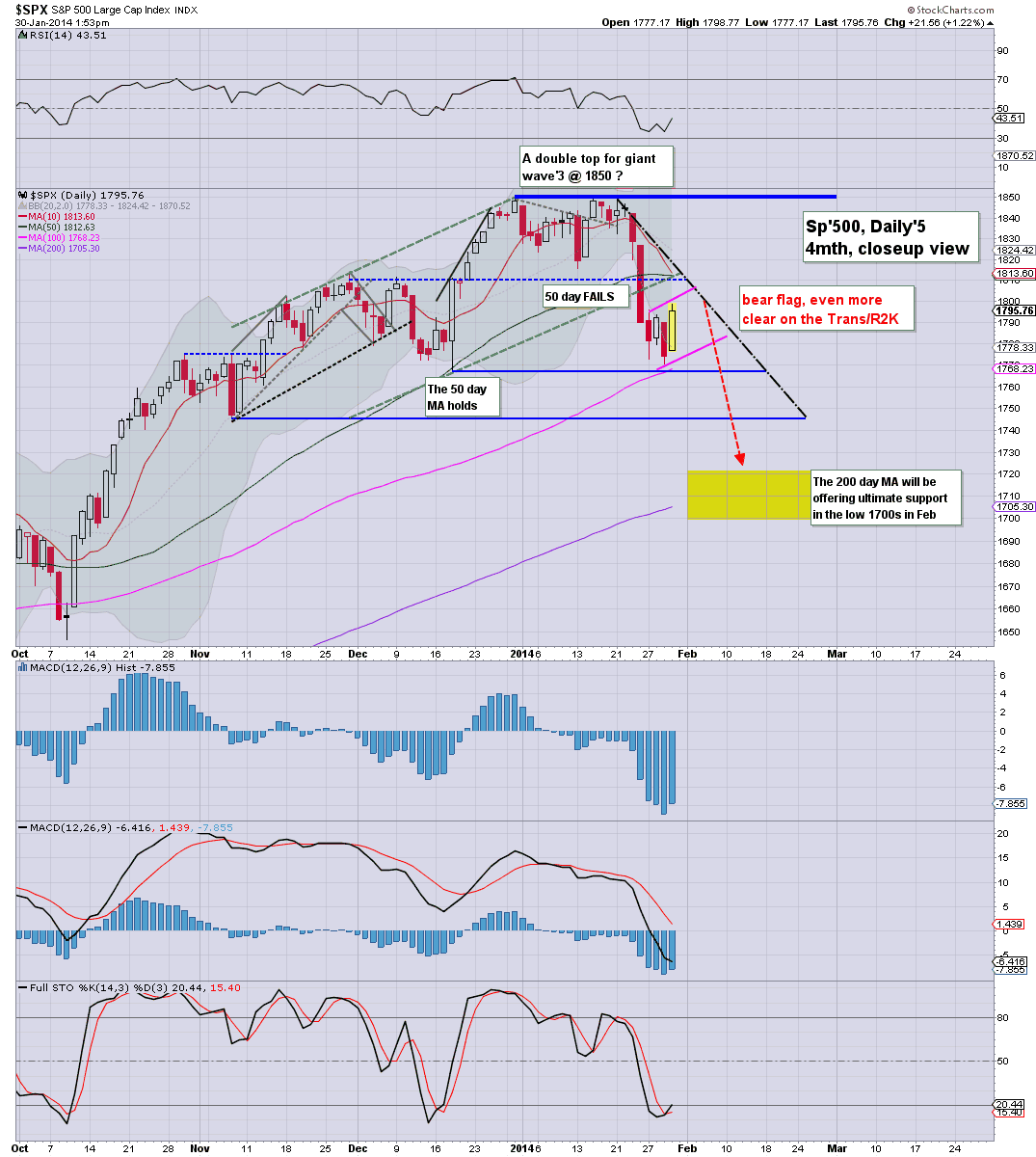 The 10 and 50 day MAs are both indicative of where the wall is.

Any daily closes >1820..and the near term bearish scenario gets dropped, otherwise...its a simple re-short.

For the big money out there..the risk/reward will be good, 1% upside..whilst downside of 7% or so.
--

*CNBC continues to provide comedy gold today, with their relief at the market rising.
-

AMZN have earnings at the close. Did they actually turn a profit in the Christmas season?

Weekly/daily charts offer upside to 425/430, to those who don't care about valuations.
Posted by Trading Sunset at 18:55:00
Email ThisBlogThis!Share to TwitterShare to FacebookShare to Pinterest

The bull maniacs are pushing hard to re-take the sp'1800s. However, as a fair few recognise, there are multiple aspects of resistance in the low 1800s. We'll surely get stuck..no higher than the 1810/15 zone. Metals remain weak, Gold -$26, whilst Oil is holding gains of 1.1% 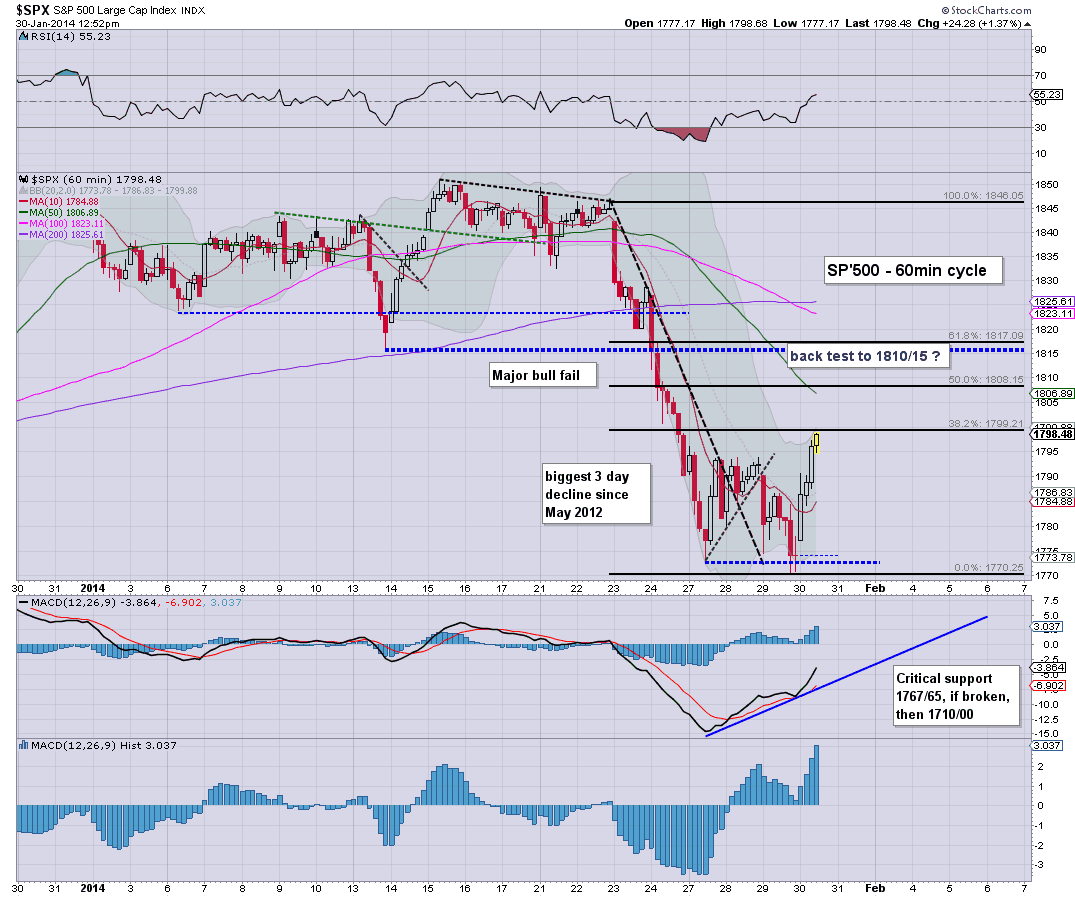 It really is just a case of sitting back, and letting the bulls push this higher..probably at least into the Friday close.

With the break to sp'1795, the bulls look set to battle to the 1810/15 zone within the next few days..which will likely equate to VIX 15/14.50. From there, we should roll over again - at least that is what the bigger daily/weekly charts would support. 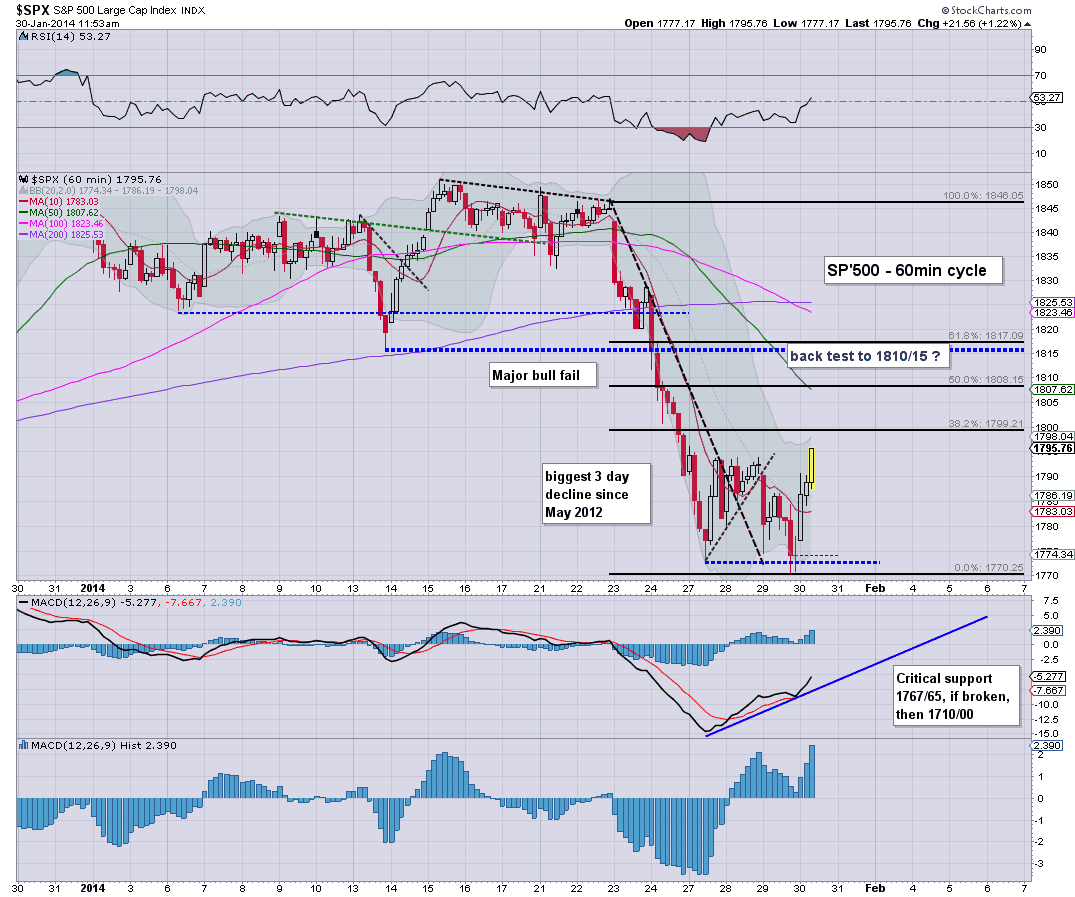 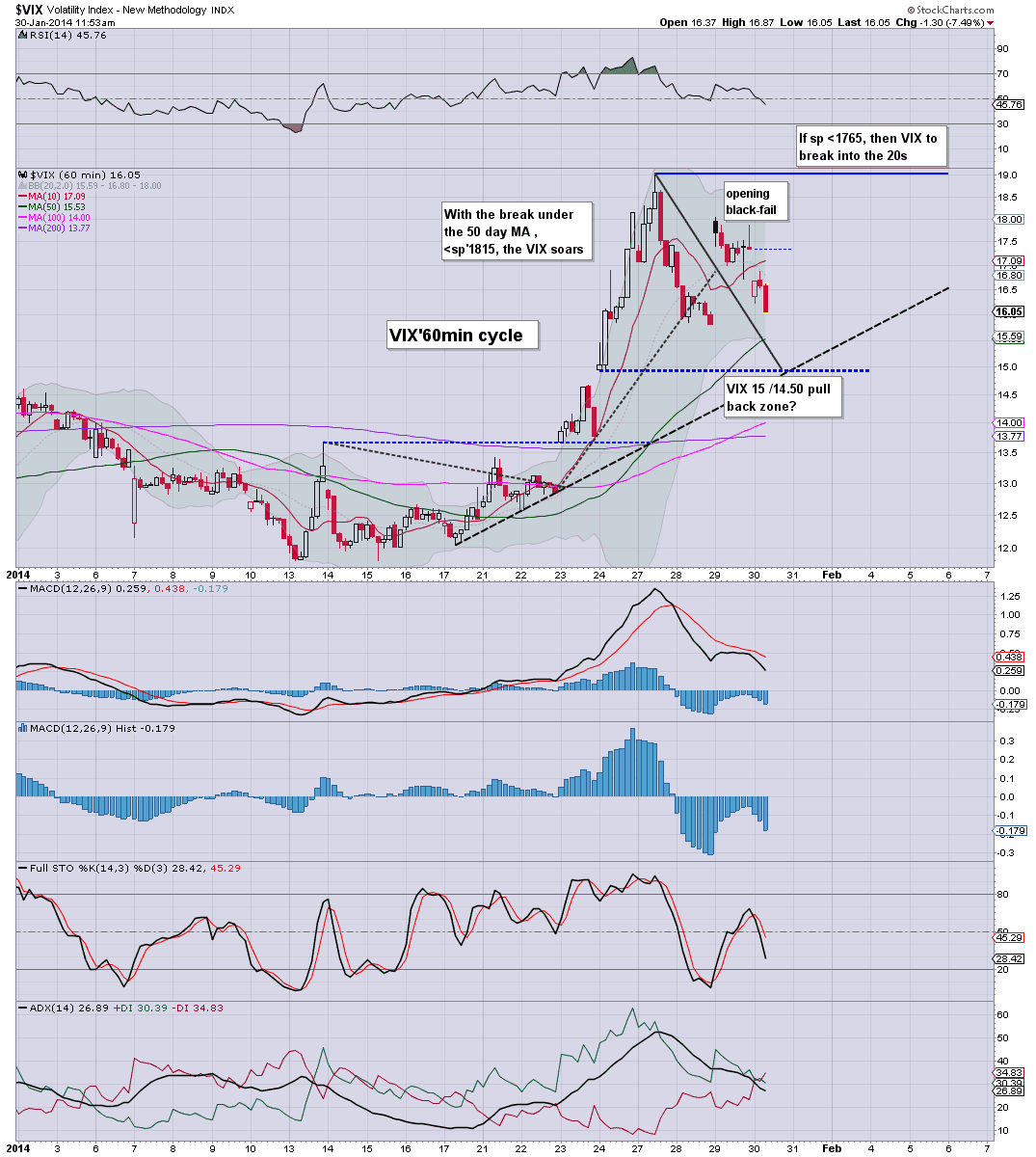 Well, anyone on the short side had plenty of opportunity to exit yesterday, if not also the Monday open.

Now..its just a matter of waiting for this bounce to complete.

*just turn on CNBC for a few minutes (if you can stomach it) some of the bullish talk is hilarious. I only imagine how hyper confident they will be on another up day to 1810/15.
Posted by Trading Sunset at 16:55:00
Email ThisBlogThis!Share to TwitterShare to FacebookShare to Pinterest

With the market holding borderline significant gains, the cheer leaders on clown finance TV are happy and oh so pleased with the world. After all, everything is fine now, the correction is over, right? Arguably, bears should be cheering on a bounce to the 1810/15 zone...it'll make for an easy re-short level. 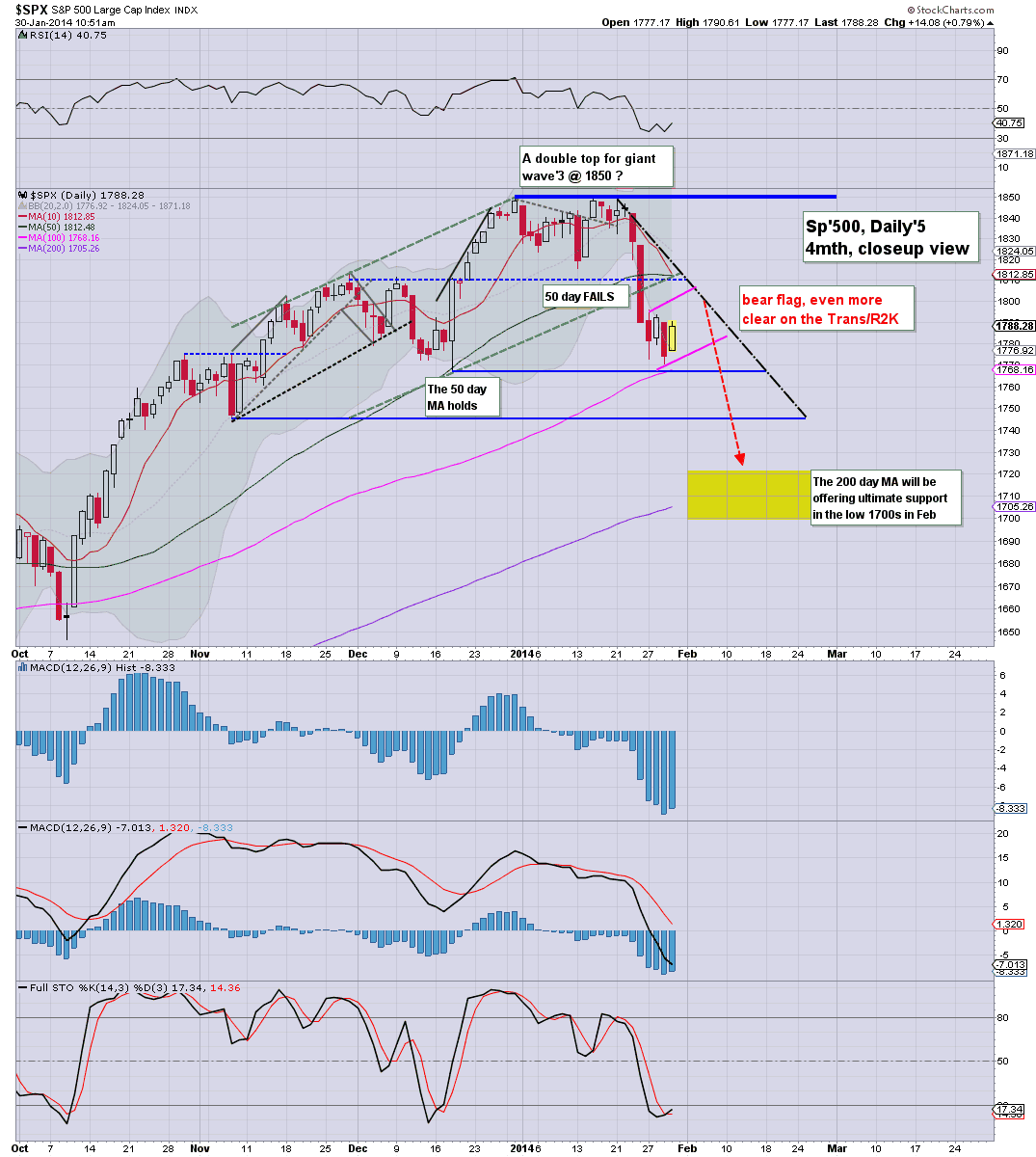 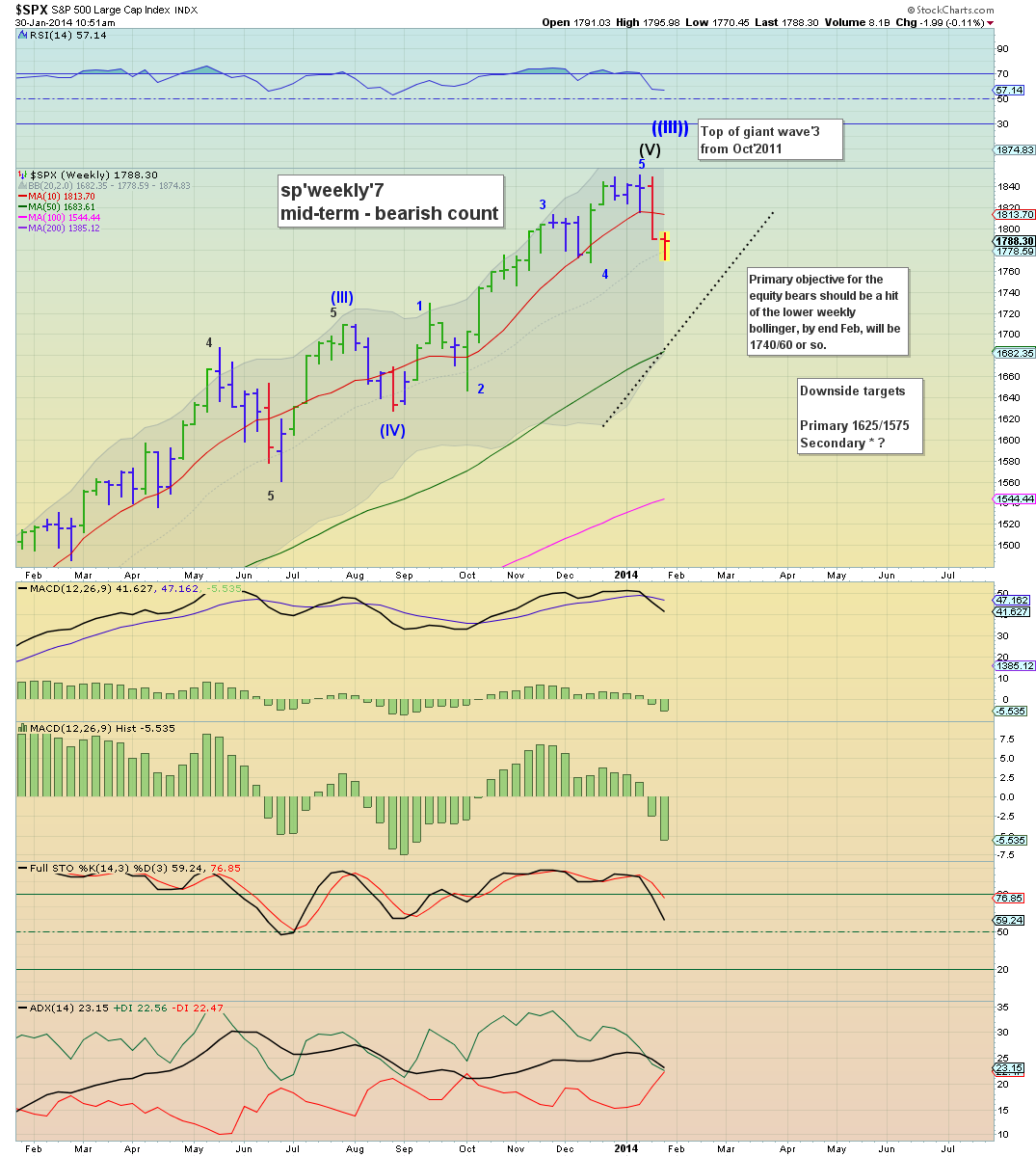 Whilst things are kinda quiet, I want to highlight the 10MAs...on both the daily and weekly cycles.

*with heavy QE tomorrow, is it arguable that bears should simply sit back and wait until early next week.

Even better of course..another $5bn less QE-pomo a month..starting next week. The underlying bid on this market is at least being somewhat reduced.
--

weakness: BTU, -4.7%, worse coal miner of the day so far..the other miners are only a touch lower
Posted by Trading Sunset at 15:52:00
Email ThisBlogThis!Share to TwitterShare to FacebookShare to Pinterest

The indexes are battling to build significant gains, with the sp' fast approaching the first key resistance of 1794. Metals are seeing some post taper reaction, with Gold -$26, Silver -2.9%. VIX is on the slide, and looks set for 15/14.50. 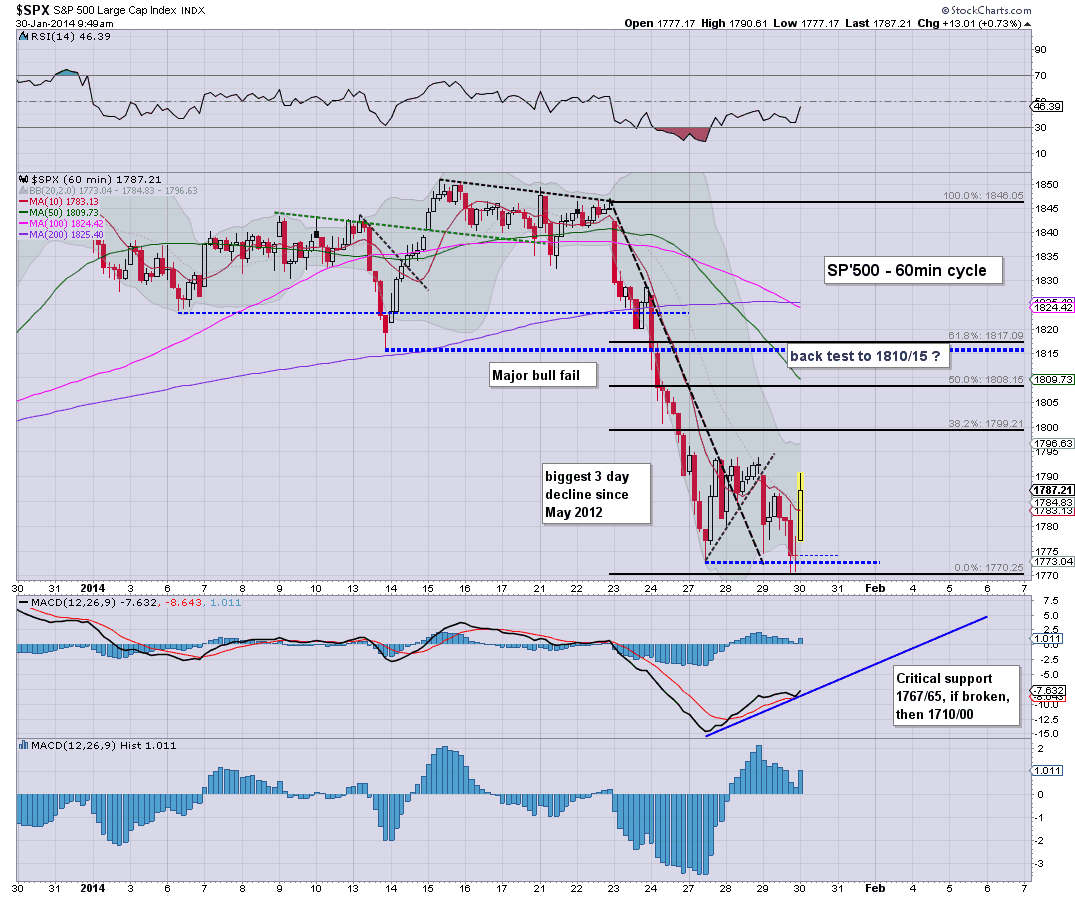 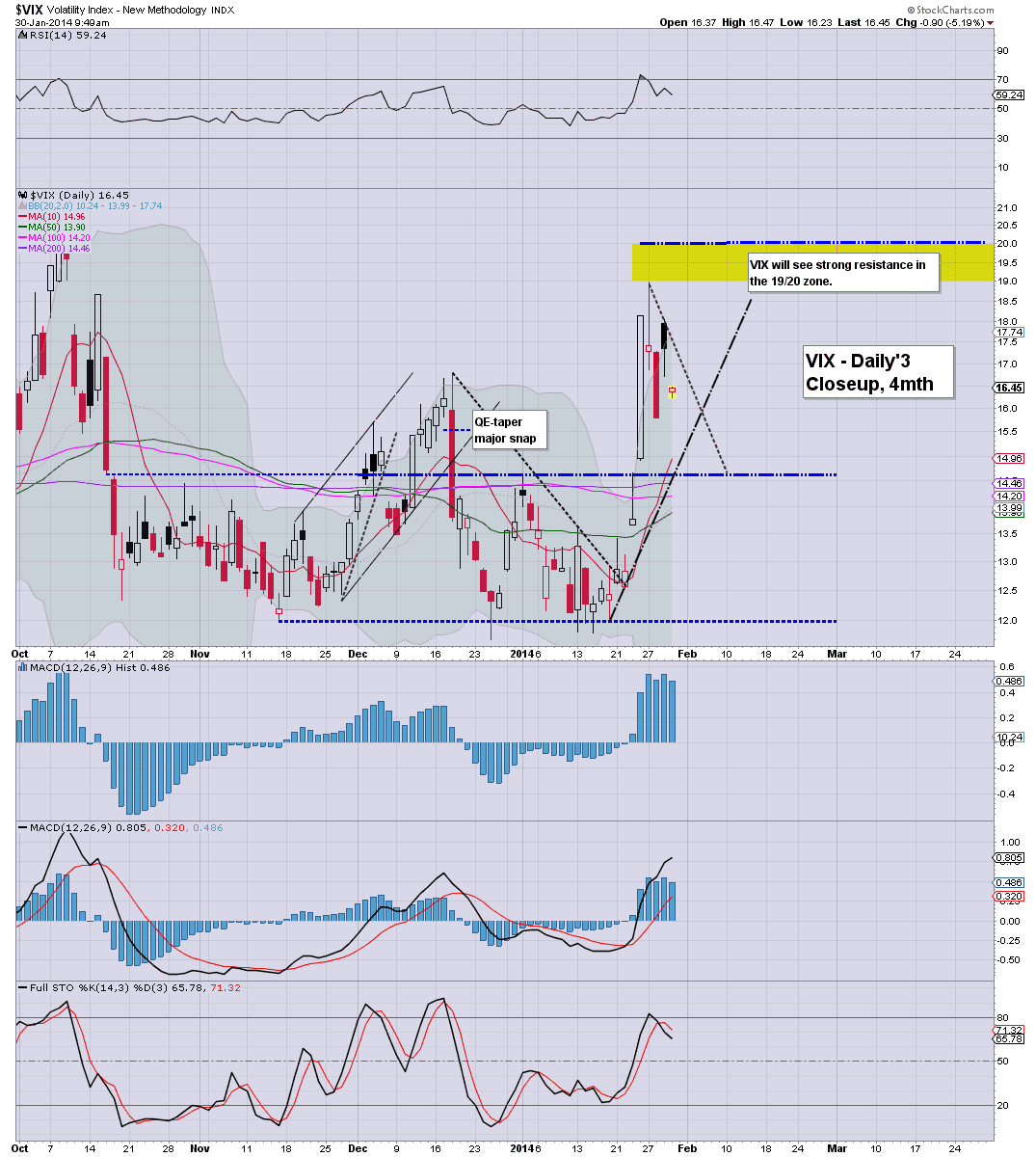 *reversal candle on the daily VIX, but I think it is to be dismissed.
--

No doubt, those holding overnight short are getting real annoyed, but worse..there could be a few days to complete this latest bounce attempt

Underlying momentum on the daily/weekly charts will remain VERY bearish for at least another week or two - even if we get to 1810/15. It remains the case..bounces are to be shorted..or to exit existing longs.
-

*notable weakness: UGAZ -13%..as nat gas prices drop -4% or so.. EIA gas report @ 10.30am. Is it summer yet?
Posted by Trading Sunset at 14:53:00
Email ThisBlogThis!Share to TwitterShare to FacebookShare to Pinterest 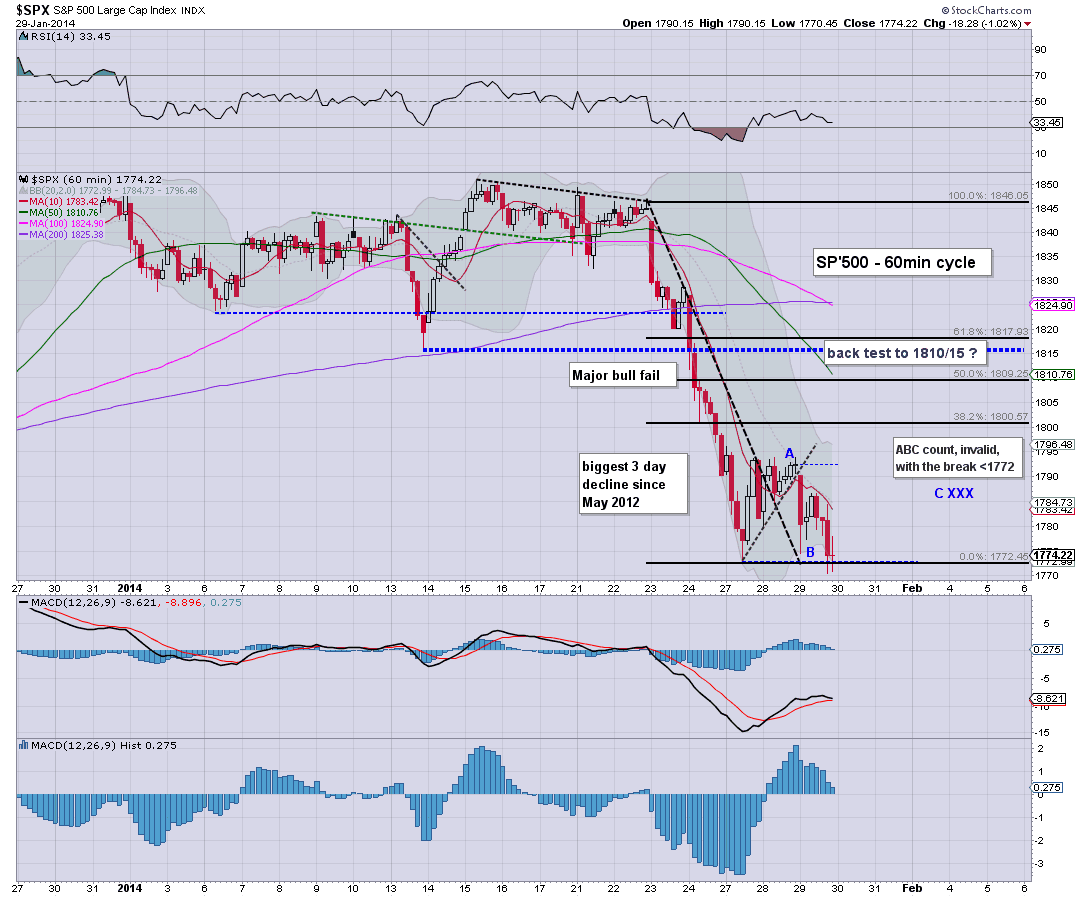 Near term threat of a move to the 1810/15 zone - although that will doubtless take at least a few days, but we should still see a broader down trend..at least to test the 1767/65 zone.

Considering the price action of last Friday, I'm still highly inclined to think the market has put in a key multi-month high already.
-

Metals sure are weak. Gold was -$31 just earlier, with Silver -3.5%.  Certainly, it seems a delayed taper reaction.

FB +14%..cooling down a little.  VIX set for the 15s.
Posted by Trading Sunset at 13:42:00
Email ThisBlogThis!Share to TwitterShare to FacebookShare to Pinterest

With QE taper part'2 announced, it was a choppy day for US equities, with the sp -18pts @ 1774. The two leaders - Trans/R2K, settled lower by -1.2% and -1.4% respectively. Bear flags are developing on the daily cycles. The equity bull maniacs are in real trouble if market slips <sp'1765. 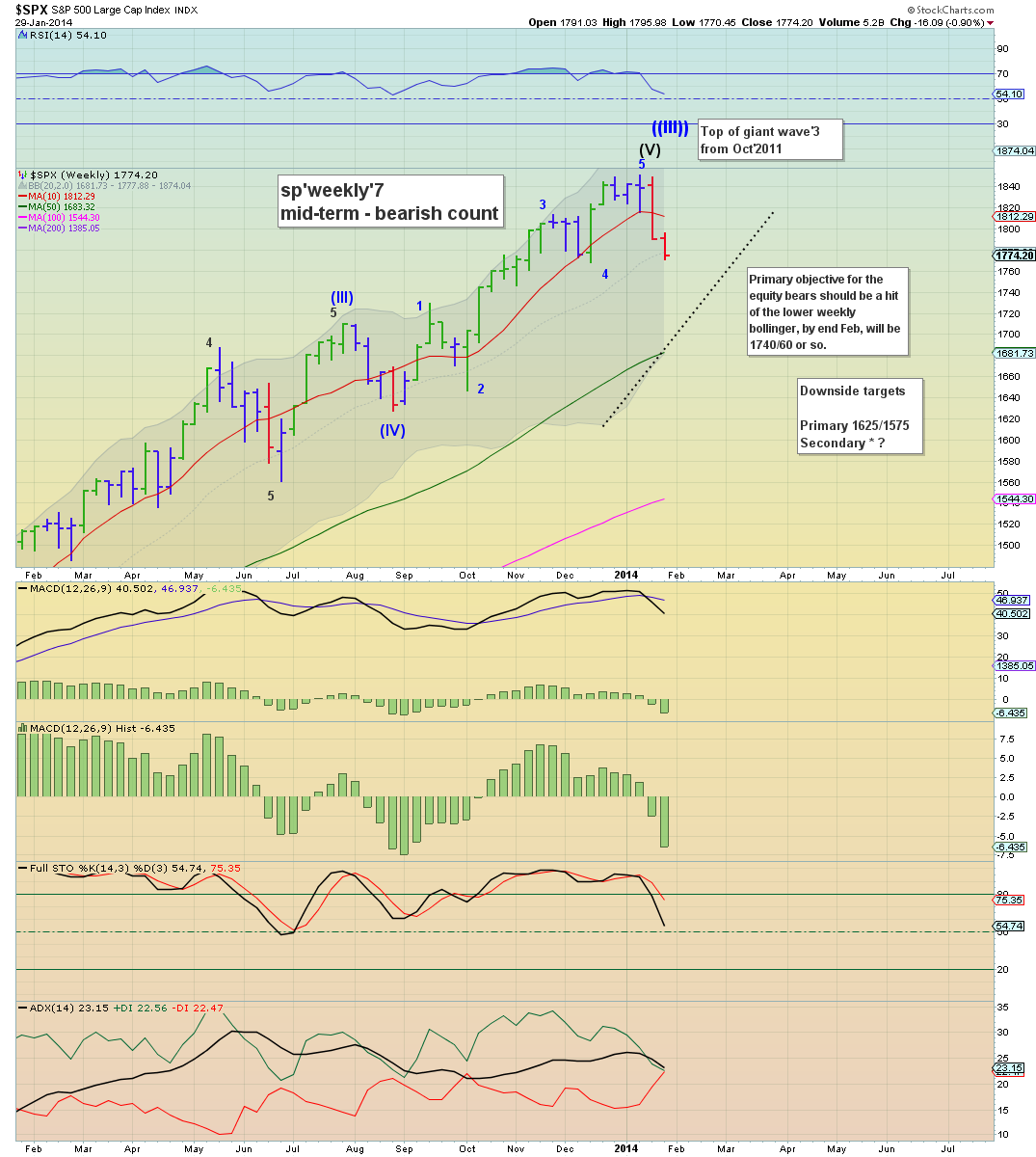 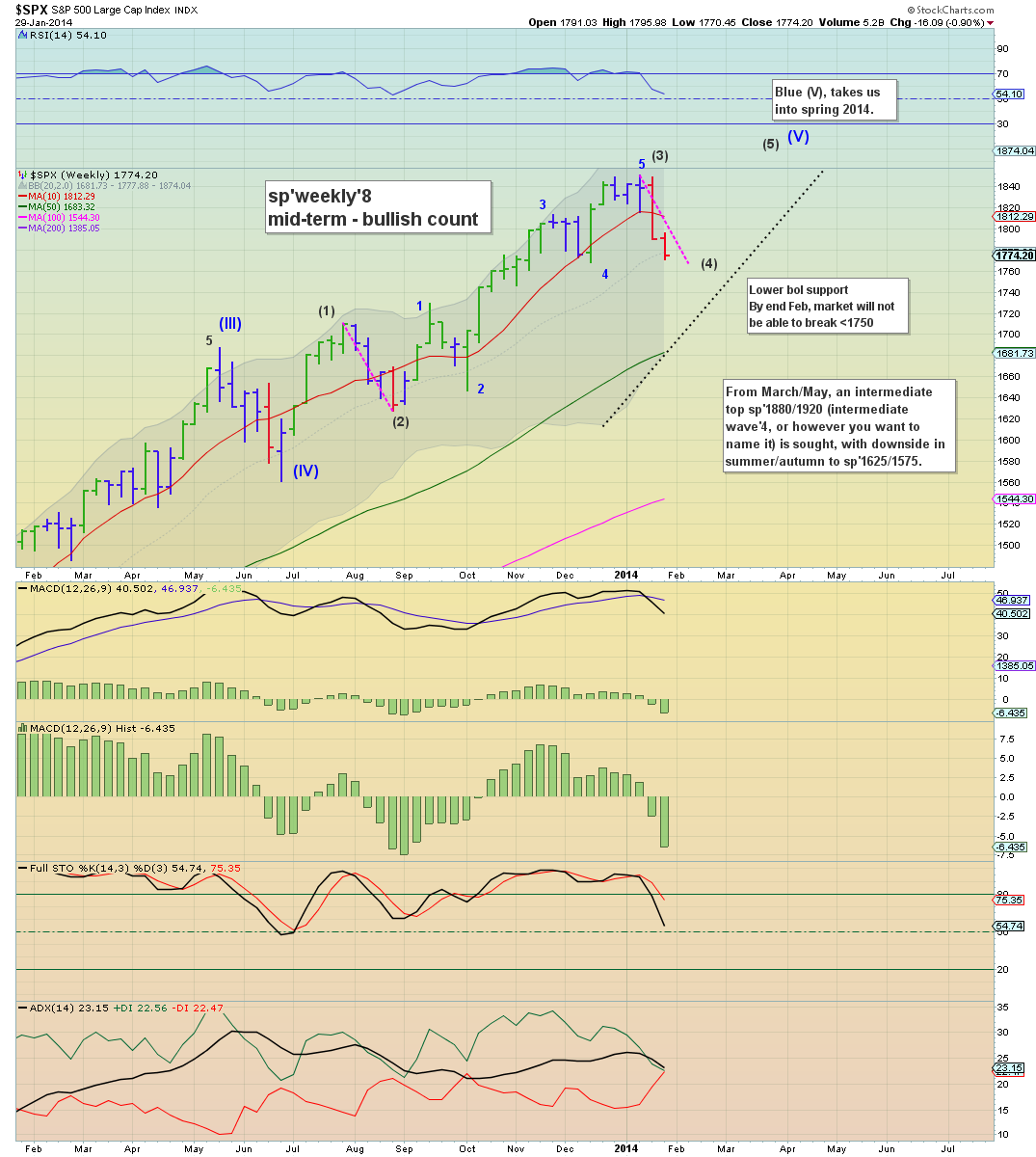 I have to note..weekly'8 was the original outlook - all the way back from last summer. If correct, it'd offer a further wave lower..but to be followed by one final lurch higher, into the 1880/1920 zone by late March/early April.

A hit of the lower weekly bollinger, and sp'1850 will be confirmed as a key intermediate wave'3 top. From that point, it gets 'relatively' easy for the doomer bears.

The following is especially posted for the remaining doomer bears out there. I think it merits at least a few minutes 'staring time'. 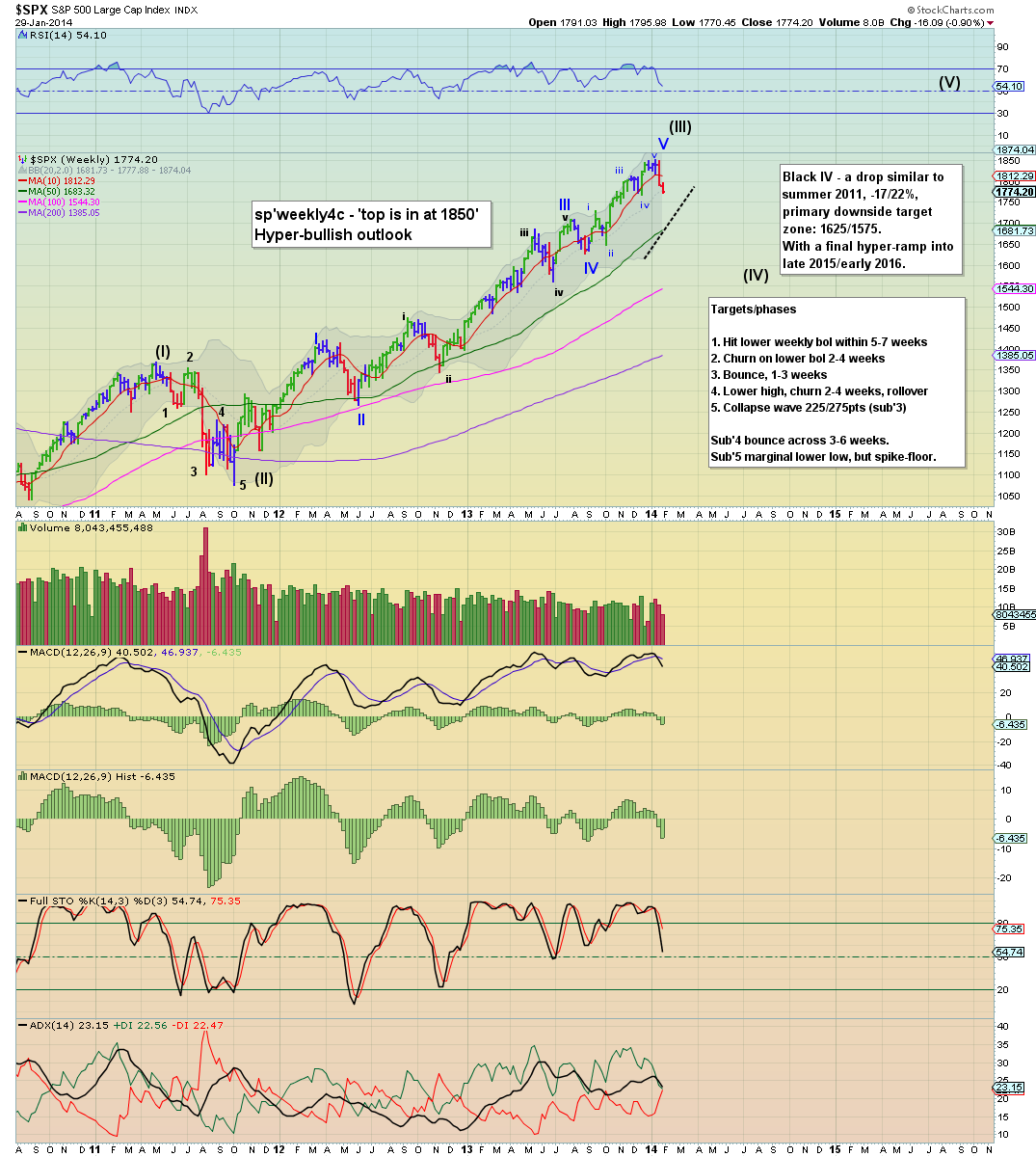 Essentially, I'd like to see a hit of the lower weekly bollinger - currently 1681 (rising 10/15pts each week), then a multi week bounce, concluded by a collapse wave - much like late July/August 2011. We can at least dream a little on this, yes?

We have the usual jobless claims, and pending home sales. However,  most important, the first reading for US Q4 GDP. Market is expecting 3.0%, which seems a pretty bold target.

The second cut in QE

I had expected a reduction of $10bn today..so..it was kinda pleasing to get that right. Obviously..the next thought was..'Will they cut another 10bn at the FOMC of March 19?'

One view that many had last year - myself included, was that the Fed would eventually reduce QE to 60/50bn..only to then see the market drop 20%..and then spool up the printer to new highs >$100bn a month. After all, why wouldn't the fed also want to start buying US student debt?

The months ahead..sure won't be boring! 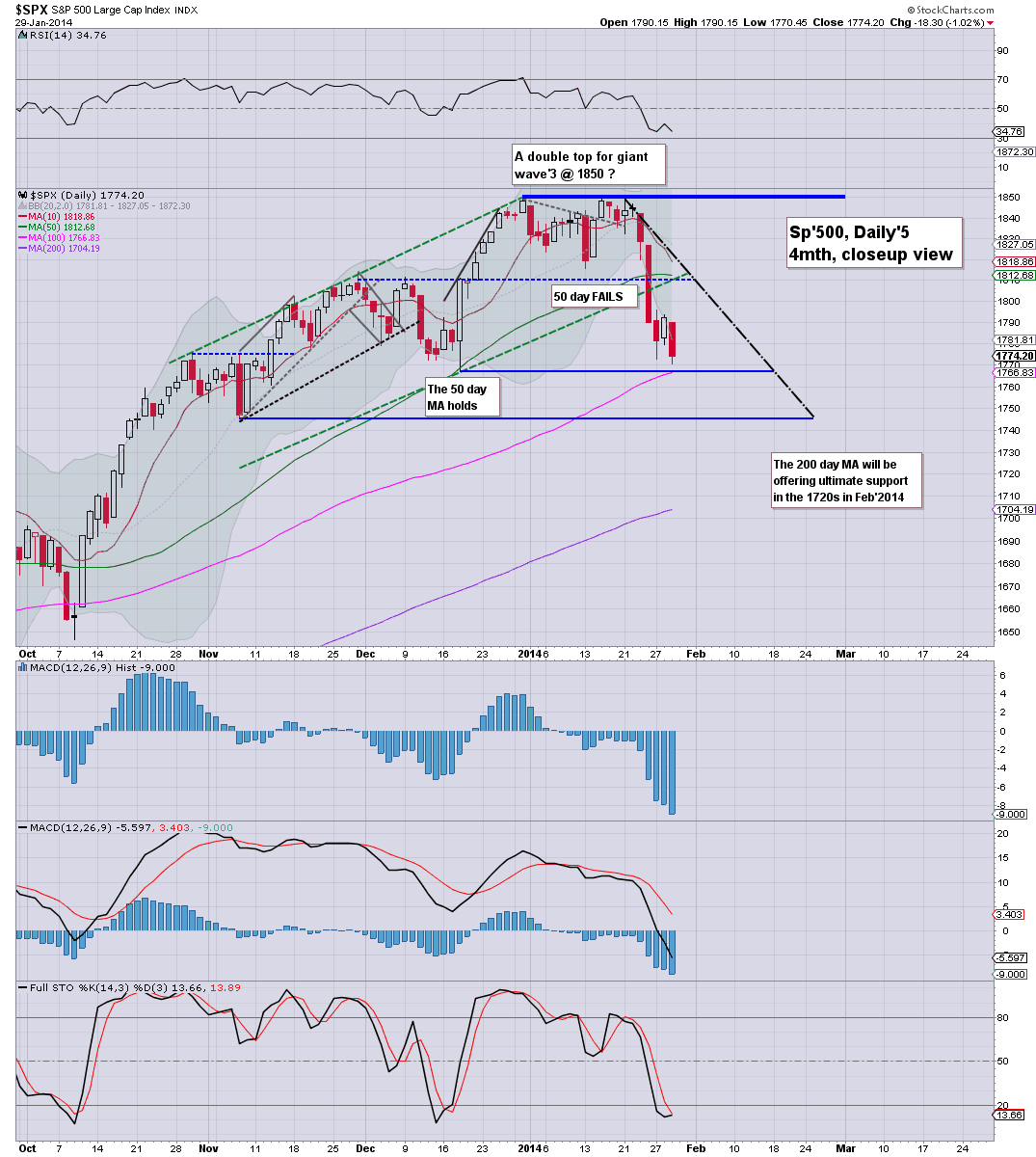 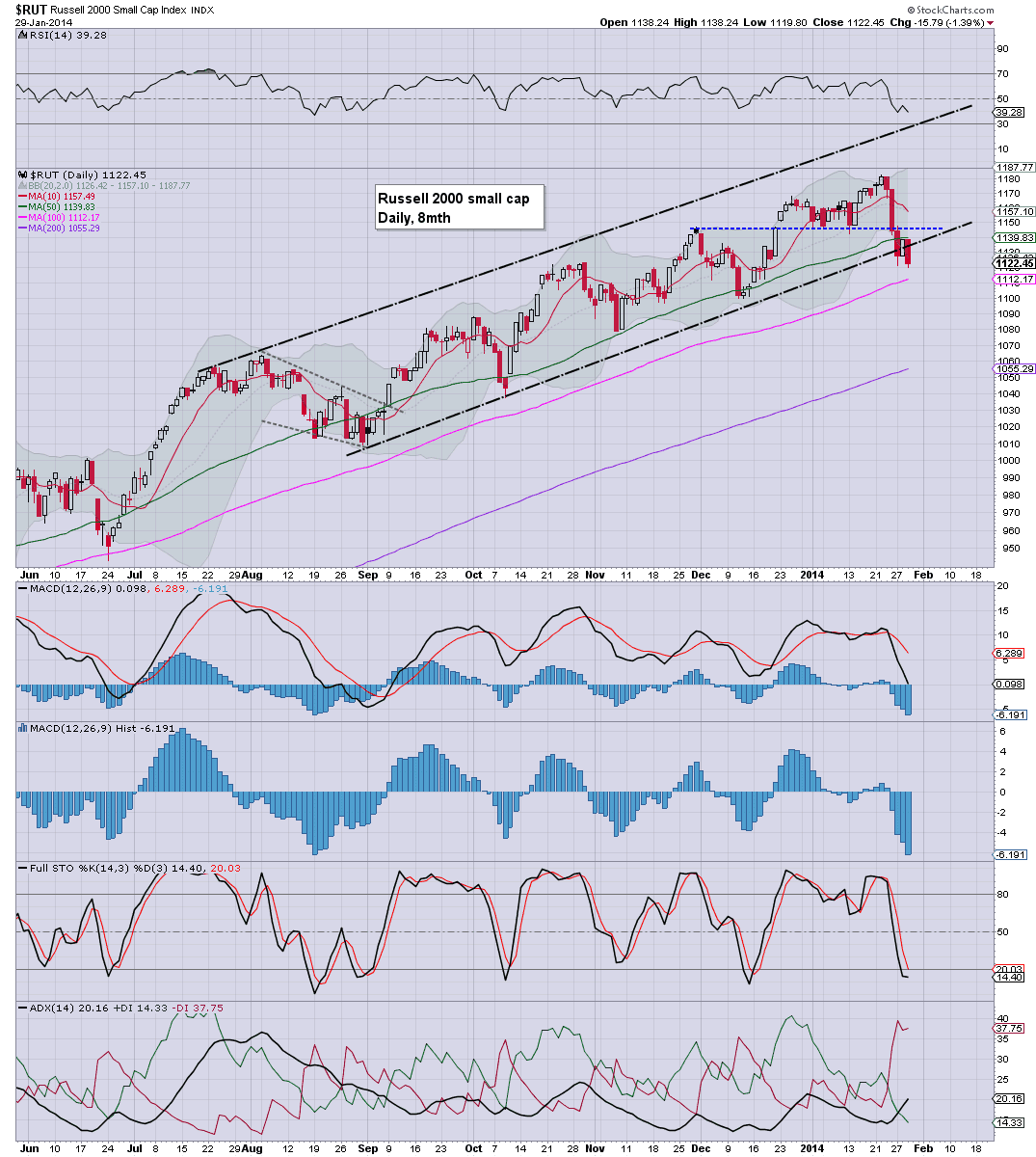 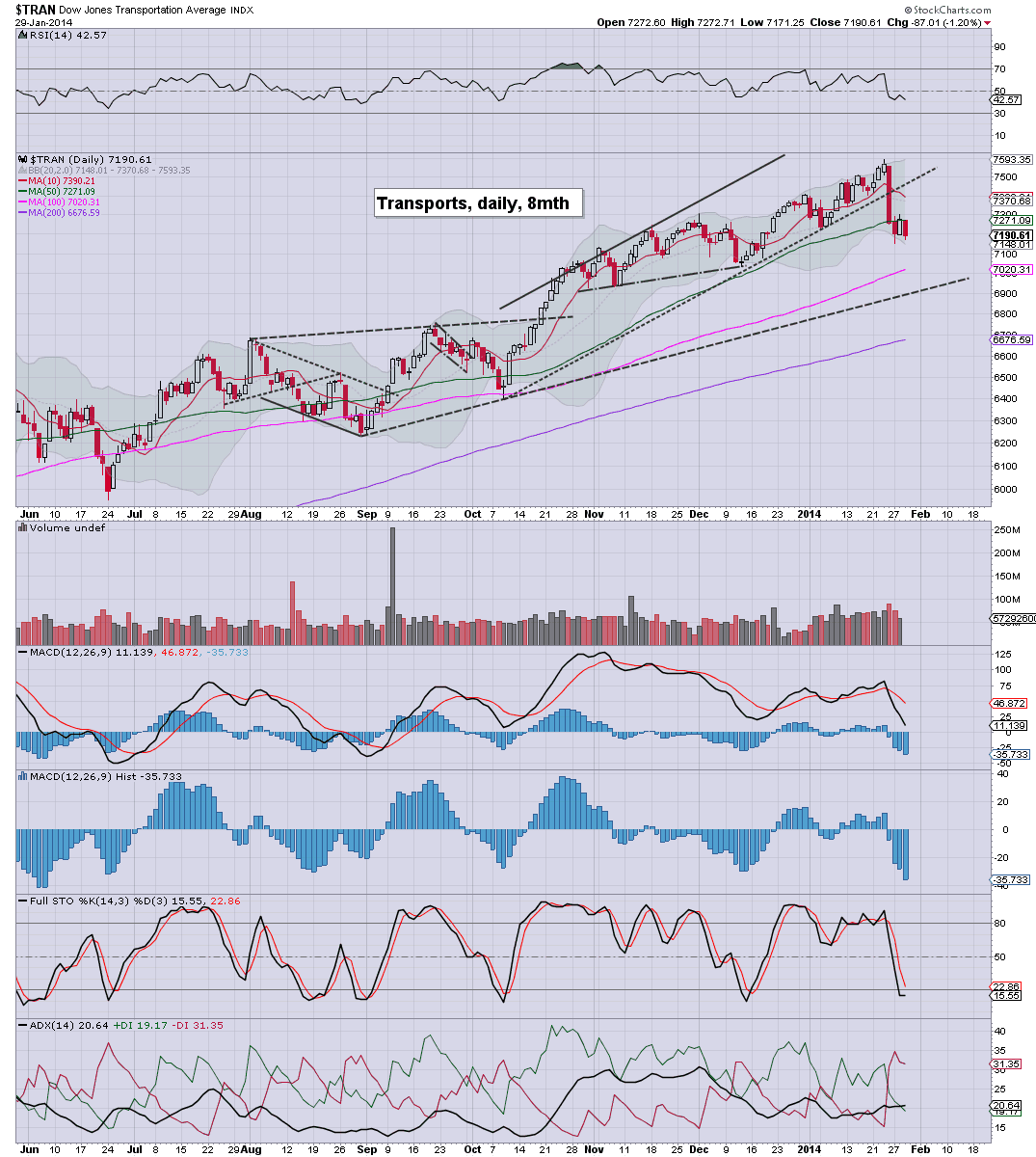 So..new weekly cycle lows for most indexes. The Trans/R2K look especially weak, and those could be multi-day bear flags forming. If yes, that would suggest the critical sp'1767/65 zone will NOT hold - offering a straight drop to the 200 day MA in the low 1700s.
--

Sp'500 broke the Monday floor, although the VIX did not break the Monday spike high of 18.99.

Without question, the bulls will face real problems on any daily close <1765, but hourly index cycles look pretty exhausted in the near term. A rally to the sp'1810/15 zone still looks viable, and with heavy QE on Friday, bears should be cautious.
--

*interesting to hear how bearish Mr Permabull has become. Especially pleasing, is to also see him note the bear flags developing on the daily charts.

As noted, any daily closes <1765..and that is when things get real interesting.