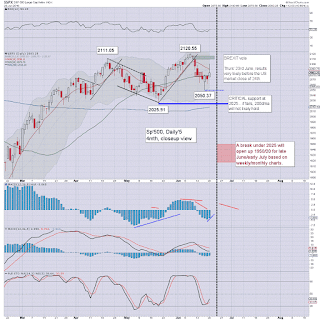 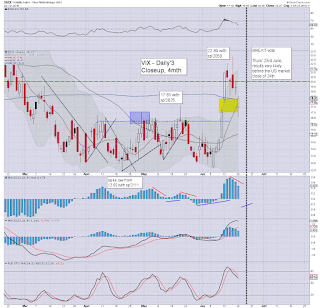 So, Mr Market managed to run the sp'2085 short-stops, and teased the bull maniacs with a morning high at the 2100 threshold.

However, there was some distinct cooling into the close, and that made for some rather spiky daily candles.

Yellen is due tomorrow morning, which threatens another push higher, but considering the daily spiky candles... a push (if briefly) above 2100 will be difficult.

I don't know. No one knows. Anyone who says with confidence they know how the vote will go is either lying... or just deluded. What can be said though, the vote will likely be very close.

I can only imagine the frustration in one of the political camps, if the final vote is no more than 2-3% split.

My guess right now? Based on a number of factors, I'm leaning on a 'remain' vote. The example of the failed 2014 Scottish vote for independence, is testament that a majority of the UK populace broadly lean conservative.

If instead the UK vote to leave... then markets are currently grossly mispriced. We shall soon find out... almost certainly before the Friday close.