Volatility flat for the week

With the equity indexes breaking to new highs, the VIX got slammed back lower across the day, closing -9.7% @ 12.90. This entirely negated all of the earlier gains built in the week, and the VIX closed flat for the week. The VIX bulls should be concerned that the low of 12.29 is now in jeopardy. 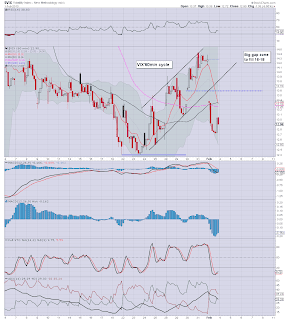 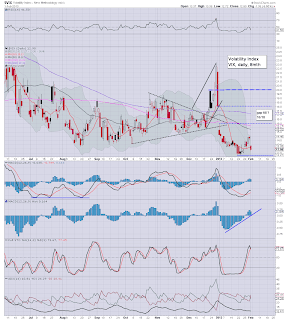 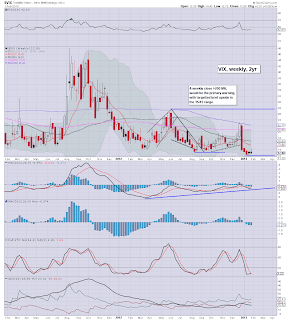 So...the market managed to break sp'1509, and with a little follow through, we hit 1514.41. Naturally, this lead to the VIX being slammed lower by over 10%, and the daily/weekly close in the 12s is a major disappointment.

Those hoping for an index retracement - with VIX filling the 16-18 gap zone, are right back to the beginning.

As things are, there is NO sign that the bears can seize control of this market for more than a day or two, and even then, they can't manage more than 0.5-0.75% lower.

Another crazy week at the casino comes to a close. Clearly, the bulls continue to remain in firm control. I'm actually surprised no one has yet called for sp'2000 by year end. At the rate of just 5% a month, that would be easy to attain!

*the hourly charts remain bizarrely 'simplistic' I admit, but then the trend is similarly simple..right? 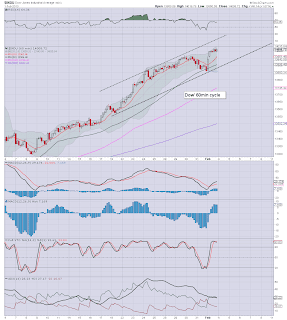 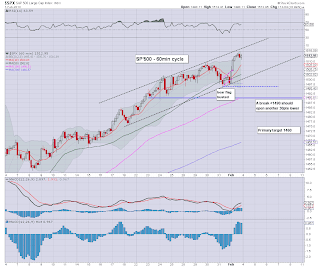 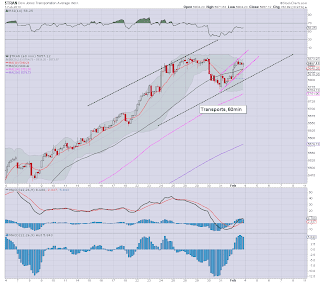 For the bears, it was yet another week of persistent pain and suffering. For the bulls, it literally is almost like the bubble high of 2007 again. Everything is fixed, right? Well, that's what the cheer leaders on clown finance TV keep saying.


A market fuelled by POMO

What concerns me most - for those on the bearish side, is the POMO money. The Fed is throwing 45bn of new money back to the primary dealers who originally bought the t-bonds.

The power of the 'POMO $' is going to be something that is simply going to remain a rumoured 'stock prop' for months..if not years to come. Personally, I think a significant amount of the money is somehow making its way from the primary dealers into financial institutions who are then leveraging it up - 10, 20, maybe even 100x, to buy equities, and even commodities.

More on that issue, another time though.

-
Its been a long week, time to switch those trading screens off.

--
*The usual bits and pieces to wrap up the week across the evening.
There will be a significant weekend post, late Saturday, probably on the US or World indexes.
Posted by Trading Sunset at 21:02:00
Email ThisBlogThis!Share to TwitterShare to FacebookShare to Pinterest

Mr Market is looking tired on the hourly charts, but clearly today is another victory for the bulls. New index highs, not least the Dow breaking the big 14k level. Regardless of the nominal price levels though..it certainly remains one twisted..and upside down market 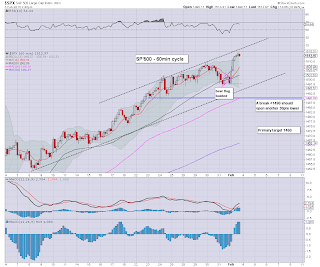 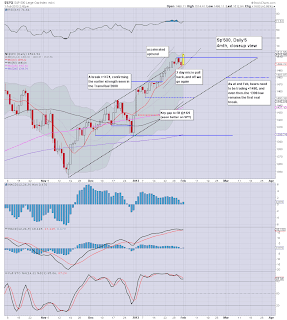 You can read the jobs data whatever way you like. Participation rate is lousy, yet...it doesn't matter, does it?

Market is fuelled by POMO $, the algo-bots are forever helping to melt everything upward, and we have the media cheer leaders out there, touting how great it is.

A few minutes of Sesame Street makes more sense than clown finance TV can make in an entire week.

back after the close
Posted by Trading Sunset at 19:44:00
Email ThisBlogThis!Share to TwitterShare to FacebookShare to Pinterest

So, it would seem 11pts was all the bears could muster across two trading days, sp'1509 to 1498..and that was that. With the current price action, there is nothing to suggest this nonsense is ending any time soon Its fuelled by POMO $, which won't be ending for many months..if not years. What else do traders need to know? 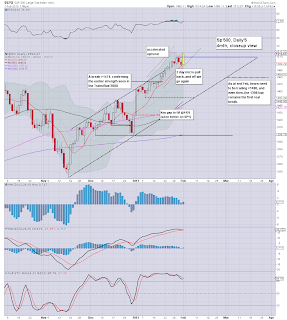 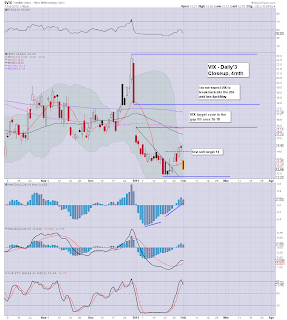 Its looking increasingly dire, although of course, the bulls themselves should be laughing themselves silly at what is occurring today.
--

A two day pullback of 11pts..and that seems to be all that's viable now.

Hopes of a retracement have to be trashed now for the foreseeable future.
Posted by Trading Sunset at 18:51:00
Email ThisBlogThis!Share to TwitterShare to FacebookShare to Pinterest

It has always been the problem that the bears have no power, certainly relative to the ability of the algo-bots to melt everything upward. The last two days are a classic example. SP -5pts...but each time the up cycle comes, it outguns the pitiful earlier decline. 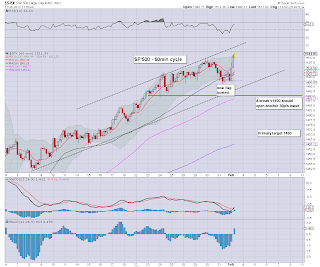 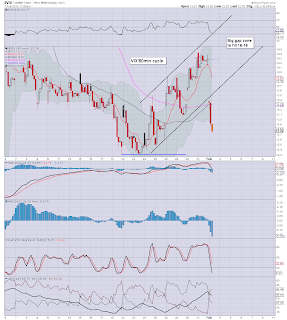 Frankly, there is now nothing for the bears to hold to. Absolutely nothing.

Price action is what matters..and with a new high...market is right back into cruise control mode. Once again, bulls start the month in a powerful form.
--

time for lunch
Posted by Trading Sunset at 16:52:00
Email ThisBlogThis!Share to TwitterShare to FacebookShare to Pinterest

11am update - the Friday close will be important

Mr Market has once again swept away those bears with short-stops. Only the Transports has failed to break a new index high. What is clear, if the bulls can hold these gains into the close, then the relentless ramp is set to continue into next week..and beyond. 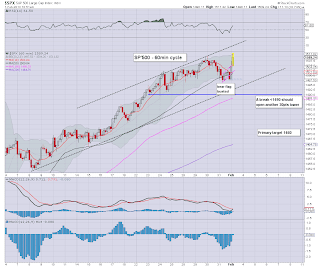 How we close today will be critical.

On any basis, bears need to see much, if not ALL of todays opening gap index gains be wiped out. Similarly, we need to see the VIX get back into those 14s, although that looks so very difficult now.

Still, a long day ahead.
Posted by Trading Sunset at 15:53:00
Email ThisBlogThis!Share to TwitterShare to FacebookShare to Pinterest

Good morning. With the headline jobs number coming in broadly in-line with what the bullish maniacs were seeking, we're seeing a spike higher..but I don't think it'll last. Look for black candles on the index hourly charts..and a red hollow reversal on the VIX. 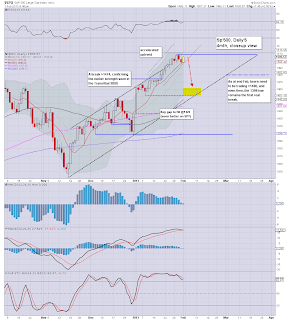 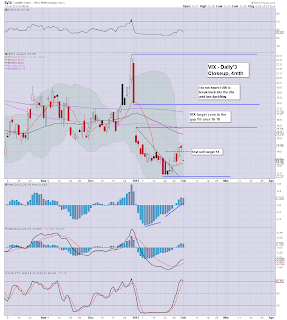 UPDATE 10am... I've just shorted Silver, it looks reasonable for a significant wave lower, at least $2 downside across the next week or two. 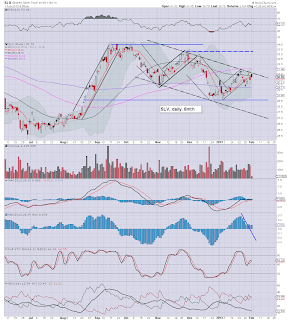 Looking for indexes to go red today. An index close -0.5% would make for a good strong reversal.
-- 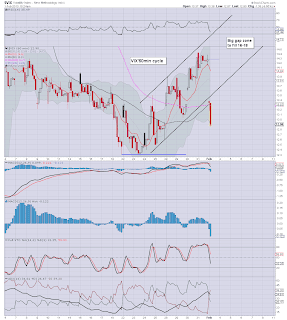 It sure will be interesting how we close today. Those low VIX 16s now look an awful way up again.
Posted by Trading Sunset at 14:50:00
Email ThisBlogThis!Share to TwitterShare to FacebookShare to Pinterest

January comes to a close, with the sp'500 ending significantly higher by 5%. Even if there is a minor retracement in the early part of February to the sp'1460/50 zone, it would still seem very likely we'll be pushing into the mid sp'1500s in late Feb/March. 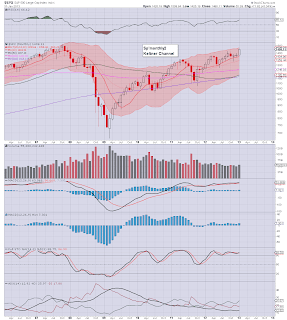 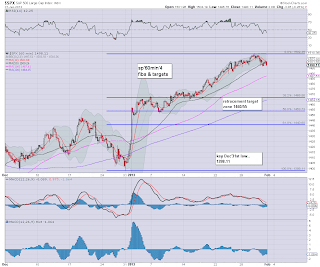 A somewhat tiresome end to the month, is it not the weekend also yet?

My best guess is a minor retracement, but then pushing to new highs in late Feb/March. I'm going to boldly suggest we max out again in April - as has been the case in the last few years, and it will only be from May onward, that the bears have their first chance of a significant retracement.

Anyway, that is probably looking too far out, and besides..lets first see if that retracement occurs.

We have another batch of econ-data tomorrow, not least the big monthly jobs number. Market is seeking 185k job gains, with a slight drop in the rate to 7.7% That's not exactly expecting too much. I'd have to guess a number >200k would give Mr Market the excuse to ramp to new index highs...with <120k being in the bears favour.

Tomorrow could be a bit of a mind-frak. Often is the case, the market will spike higher...to a new brief intra-day high, before a sharp reversal.

On any basis, the bears need a Friday close <1490, with VIX in the 15s. The bulls started January with a hyper-ramp, lets see if the bears can start February with the indexes -1% by the Friday close.

The market saw a very mixed..but rather muted day. The Trans and Rus'2000 showed some moderate upside, whilst the other indexes saw moderate declines. Its a bit of a mess, but we'll have a much clearer idea of where we headed next week, from tomorrow's price action. 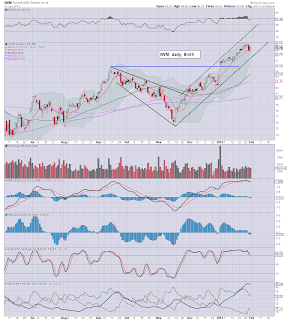 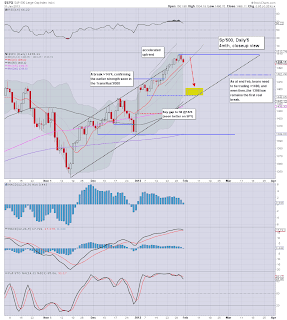 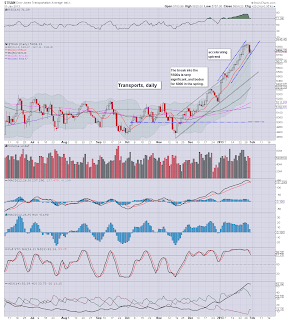 The fact the Tranny and R2K closed a little higher does not wreck the hopes of a near term retracement, but they sure don't help!

What is clear, if we take out sp'1510 tomorrow, with the Trans/R2K showing similar new highs..then bears are right back to square'1.

It is arguably very important - from the bearish side, that we close Friday <sp'1490, with VIX in the 15s. That will open up a further 30pts to the downside.