The indexes closed the week somewhat mixed. Certainly, there is no clear turn back lower, but we are seeing a few initial signs of weakness. With the market pulling back from the FOMC highs, the big question remains, is that it for this bounce from the November lows? We should know for sure, within a few weeks.


Lets take a look at the six main US indexes.

*all charts have been updated, I've added a new broad downside channel, which links the Sept' high with this weeks FOMC high - and a corresponding lower channel at the November low.
-- 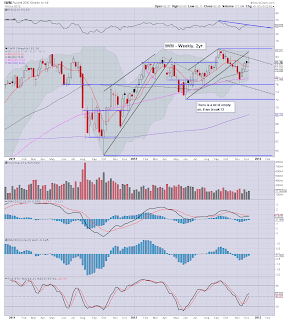 The rather volatile Rus'2000 index closed the week fractionally higher, but is sporting a spiky candle, and that is probably the top of this multi-week wave.

A break below 81, and certainly 80 would likely confirm the spike, and open up 76, which I don't believe will hold. An eventual move to break the June low of 72 seems viable, and hitting 70 - where the 200 MA is lurking. 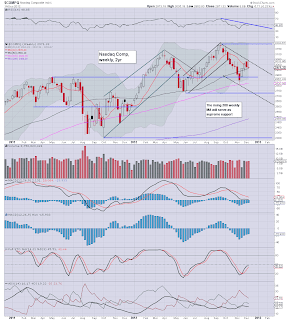 The mighty tech' sector remains a real problem for the bull maniacs. This week only closed a little lower, but that's in addition to last weeks decline, so we have a new trend underway. 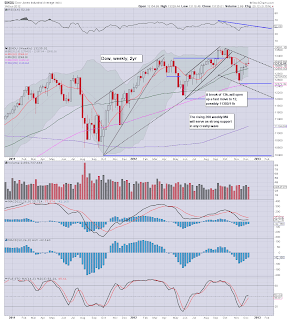 The Dow closed the week a touch lower, but more importantly, it has a spiky candle, and this is probably the top of the cycle. First downside target is the big 13k level, if that fails, a move to around 12800/750 is likely within a day or so.

Only with a break back above 13400 could I get bullish on the Dow, and even then, the more important threshold is the 13600 level, at which there is massive resistance. 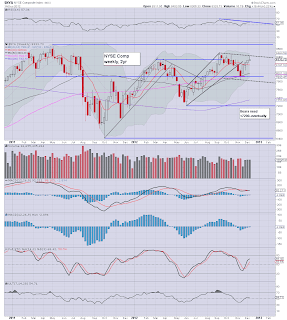 The master index closed the week a little higher, but like most other indexes, also closed the week with a spiky candle. Certainly, the NYSE Comp' remains the most bullish chart for the bulls out there. It remains a mere 2% from breaking the September highs.

The underlying indicators are moderately bullish, although even in the NYSE, there is a touch of negative divergence. 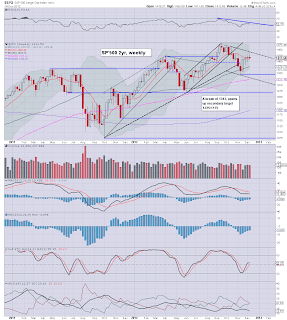 The important sp'500 closed the week -0.3%, but more important, that is 25pts below the Wednesday FOMC high of 1438. We have a clear spiky candle for the week, and the fact it closed red is some further confirmation of weakness returning to the broader US markets.

First target is the 1390/80 zone, where there is a lot of support, not least with the 200 day MA @ 1387. A daily close in the 1370s would be a major warning of trouble, although in the near term that might merely be a brief low, before the much deeper low in January.

Indeed, the January target is a minimum 1325 - taking out the November 1343 low. However, I can't see the 1300s holding if the Nov' low fails. A test of the June low @ 1266 seems very viable, and considering 'everything' - especially the monthly charts, I hold to my original target of sp'1225. 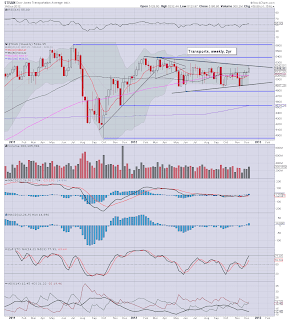 The tranny had another crazy week, and managed to close the week with gains of 1.1%. The daily chart though suggest we are now stuck, with no less than four spiky candles! I await the first major day to the downside, first target would be the big 5000 level.

Again, I will note that the transports is to be closely watched, in that the eventual direction it breaks out - whether its >5400 or <4800, will be a key signal about where the broader market is headed.

I have to note that my overall bearish outlook was indeed on the brink of getting thrown out, had we broken into the sp'1440s, and put in a few daily closes at that level.

Yet...no. Once again, it seems the FOMC has marked another top. If sp'1438 was the top..then how will the next down cycle play out? Consider the following four broad near term scenarios... 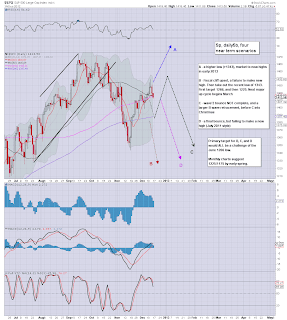 My best guess is scenario D. This is where we'll see a moderate decline this coming week for 2-4 days, but levelling out somewhere in the 1380s..before a small bounce into Christmas week. The critical issue will be putting a lower low - <sp'1438. I'd guess somewhere around 1400/10, by Dec'26/28. I would then be seeking the first moves in a very significant down wave, that would continue across much of January.

So, a little lower, small bounce..then the major move.
--

As for next week, well I'd certainly like to see some downside action, a move into the sp'1380s would be very much preferred. I see some others out there touting a break much lower, even below the November low of 1343. I can't see that outcome, not so close to Christmas.

Lets be clear, each day we get closer to Christmas, trading volume will likely get lighter, and that will merely allow the algo-bots to take command, and melt the market back upward.

So, best guess is a moderate sell off, perhaps briefly into the 1380s, by Wed/early Thursday, and then up...across Christmas..and perhaps a day or two after, Dec'26/27.

I remain short, seeking an exit in the 1380s..and intend to sit it out until after Christmas day. I am especially seeking to pick up some VIX Feb calls from Dec'26 onward.

Back on Monday.
Posted by Trading Sunset at 19:41:00
Email ThisBlogThis!Share to TwitterShare to FacebookShare to Pinterest 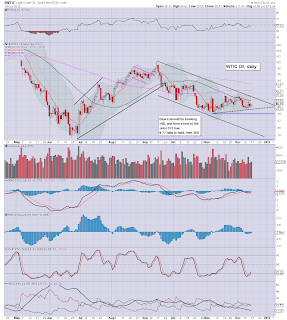 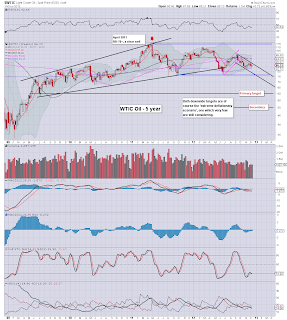 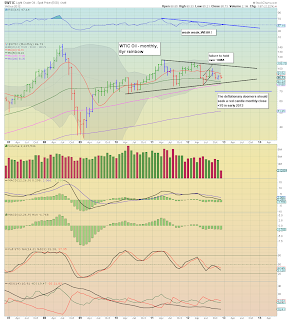 *next post, late Saturday, covering the weekly US index cycles.
Posted by Trading Sunset at 04:00:00
Email ThisBlogThis!Share to TwitterShare to FacebookShare to Pinterest 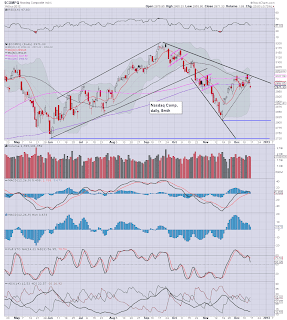 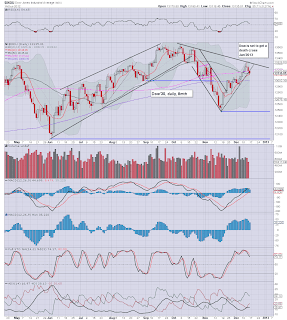 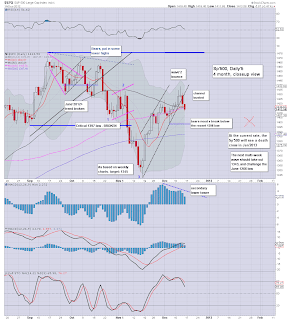 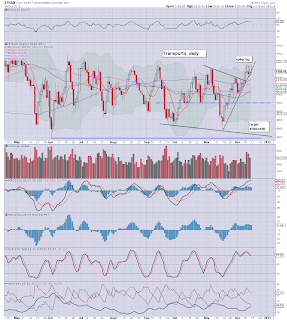