With the main indexes generally closing moderately lower, the VIX saw moderate gains, peaking around 6% higher at 14.21. With the market recovering a little across the afternoon, the VIX fell back, closing +0.7% @ 13.42. 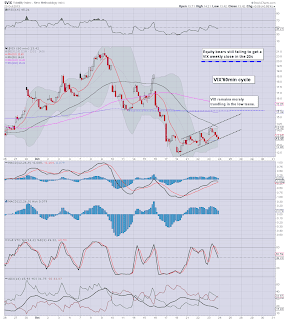 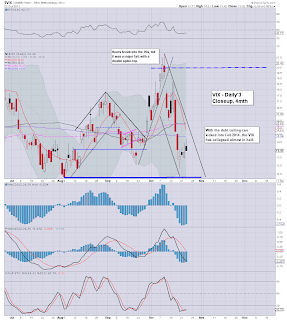 There remains little to add about the action in the VIX. It is an essentially fearless market, and baring some sporadic major news/event, VIX looks set to trundle in the low/mid teens for the remainder of the year. 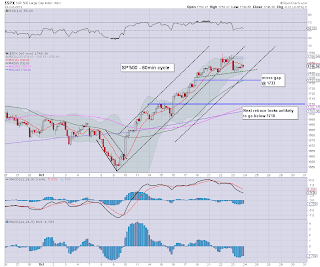 For the bears, it was the first down day since last Tuesday - when the SP' closed at 1698. Yet, the declines today were only moderate, and frankly, a return to sub 1700s looks very unlikely for some weeks, if not months.

With powerful - a very profitable companies like AAPL and GOOG, both closing with good gains, I find it impossible to consider today as anything other than minor weakness.

Have a good evening.
--
more later...on the VIX
Posted by Trading Sunset at 21:02:00
Email ThisBlogThis!Share to TwitterShare to FacebookShare to Pinterest

The main indexes are clawing back upward. Most notable, the Transports, +0.7% @ 6964, the 7000s are now viable in the remainder of this week. Metals and Oil remain weak. If the indexes battle back into the sp'1750s, VIX will close red, again reflecting a market that has no concerns until next spring. 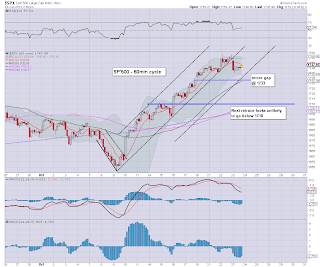 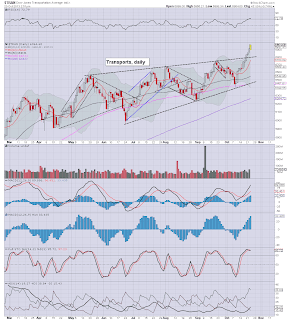 Same old problem for the bears. Equity bulls should be content with any close in the 1750s.
--

GOOG +$25 @ 1032...pretty amazing to see, but then...$2000 would be a lot more 'amazing'...if market continues on the hyper-ramp path.
Posted by Trading Sunset at 19:54:00
Email ThisBlogThis!Share to TwitterShare to FacebookShare to Pinterest

The main indexes are holding minor declines of around 0.5%. Bears are trying to break the earlier low of sp'1740, but that will be difficult. Metals and Oil remain weak, but above their lows. VIX is showing a fearless market, up a mere 3% in the 13.70s. 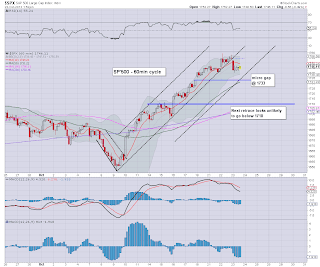 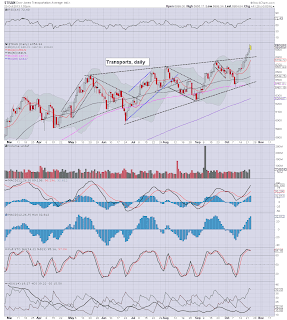 Regardless of how we close, the primary trend remains to the upside.

I realise, that is not what many want to hear..but that is how it is!
--

Interesting price action in all the momo stocks, with FB -1.9%, TSLA -5%, but NFLX is seeing a minor rebound after yesterdays severe reversal, currently +1.5% in the $327s.
-
Posted by Trading Sunset at 18:55:00
Email ThisBlogThis!Share to TwitterShare to FacebookShare to Pinterest

Whilst the main indexes are holding moderate declines (strong support remains sp'1635/30), one of the hysteria/momo stocks is in real trouble. Tesla (TSLA) is seeing sharp declines of 5%, and a break into the 150s opens up the 110/100 zone. 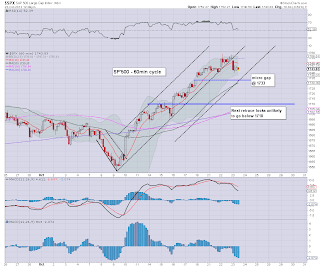 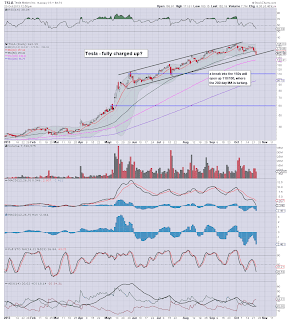 The main indexes are tiresome, the hysteria stocks are proving to be far more entertaining today.

TSLA, along with NFLX and all the other usual suspects remains insanely valued, and it is especially amusing right now to see it on the edge of breaking below what is something of channel/trend support.
-
Posted by Trading Sunset at 17:51:00
Email ThisBlogThis!Share to TwitterShare to FacebookShare to Pinterest

The market has seemingly floored at soft support of sp'1740. With $3bn of QE fuel today, there is the usual high probability of a latter day recovery. As ever, whilst the QE continues, equity bears are almost always outgunned by the Fed. Metals and Oil are both clawing above their earlier lows. 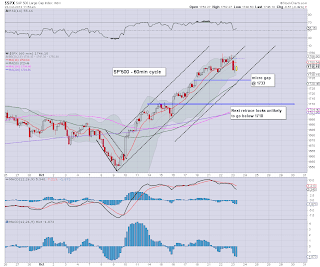 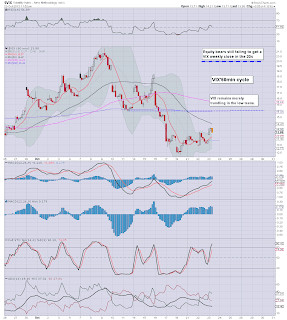 From an hourly MACD cycle perspective, we've very likely seen the low of the day.

Everything continues to go against the bears, all three major cycles - daily, weekly, monthly, are bullish, with further upside into November.


---
Notable mover: TSLA, -4.5%, no doubt Oscar will be riding that train (or car) lower...
Posted by Trading Sunset at 16:57:00
Email ThisBlogThis!Share to TwitterShare to FacebookShare to Pinterest

11am update - don't get lost in the bearish hysteria

The indexes are lower, but we're just 1% from the recent high. There should be strong support in the 1735/30 zone, a weekly close under there looks very unlikely. Metals remain weak, with Gold -$7. Oil remains on the slide, -1.8%. 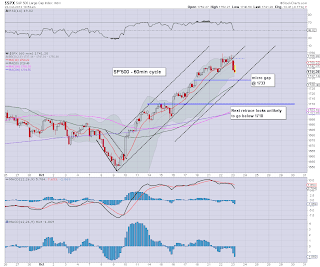 No doubt you'll see some of the doomers come out to play today. After all, we're now a huge 1% below the recent 1759 high, which was clearly a mid/long term cycle high, right?

There is QE today, and regardless of where we do close, none of this mornings declines can be taken seriously.
-

Anyone who disputes that should go stare at any one of the world indexes for a good hour. 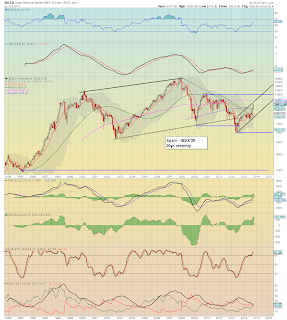 On any basis, an easy 20% upside into next spring.
Posted by Trading Sunset at 15:57:00
Email ThisBlogThis!Share to TwitterShare to FacebookShare to Pinterest

The main indexes are moderately lower, with the sp in the mid 1740s. There should be strong support in the 1740/35 zone. A daily close <1730 looks highly unlikely this week. Metals are weak. Oil is seeing further sharp falls, -1.9%. VIX is a mere 4% higher. 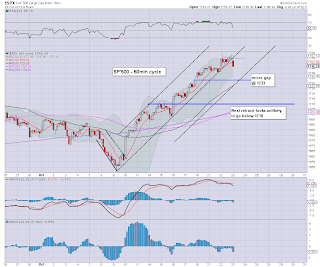 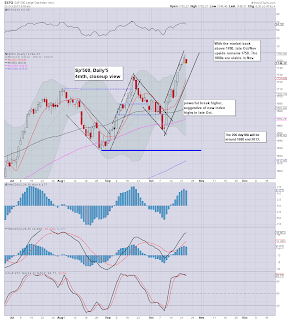 The declines are indeed very minor, and there should be good support in the 1730s...and that won't be easy to break into.

NFLX is again especially interesting to watch. Icahn selling half his stake has upset a few, but the stock is clearly oversold after its fall from $396 to $315. 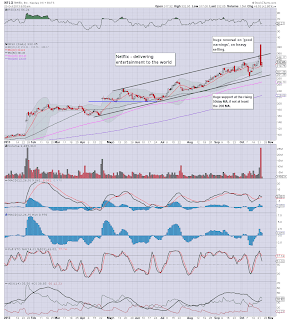 A bounce into the 340/50s looks very viable.
Posted by Trading Sunset at 14:54:00
Email ThisBlogThis!Share to TwitterShare to FacebookShare to Pinterest

Good morning. Futures are moderately lower, with the sp -9pts, we're set to open around 1745. Metals are weak, Gold -$9. Oil is very weak, -1.6%, with WTIC in the $96s. Equity bulls could sustain a drop into the low 1730s and it will do zero damage to the current very strong upward trend. 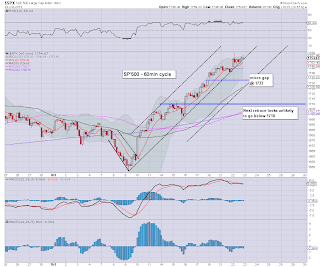 It feels like a fair while since we have opened lower, yet...we're only talking about index falls of 0.5%. This is absolutely nothing for the equity bears to get overly excited about.

Frankly, baring a move back under 1700, and then the August low of 1627, I can't take any decline remotely seriously.

*bears should keep in mind there is a sig QE-pomo of around $3bn today, which will no doubt help to negate much..if not all of the sell side volume.

--.
Posted by Trading Sunset at 13:29:00
Email ThisBlogThis!Share to TwitterShare to FacebookShare to Pinterest

US and world indexes are bullish on the daily, weekly, and monthly cycles. Yet, the top callers are still out there, touting an 'imminent market collapse'. Despite being a self titled 'Permabear', I'm way beyond tired of these single minded lunatics. 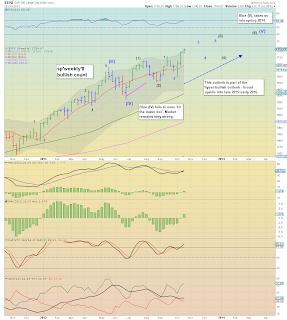 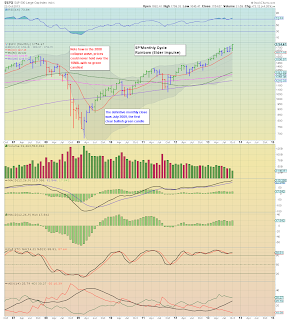 The weekly and monthly 'rainbow' index charts are both sporting green candles. There is simply nothing bearish, and the trend is very much to the upside.

Obviously, we're over-stretched on the daily/weekly cycles, but the market still looks set to grind higher into November. The sp'1800s will certainly surprise many, even the cheer leading maniacs on clown finance TV aren't yet touting the 1800s.

Yes, there are divergences,...yet price is what matters more than anything, and prices are still headed higher.

I've certainly been whipsawed across the past few months, but even I can admit the current trend remains unquestionably to the upside. I find especially bizarre the sheer audacity of the remaining bearish posters who are calling yet another top...barely two weeks since the most recent rally began from sp'1646.

I guess I could reel off a long list of names. Hell, some of them are in the sidebar links list. I'll keep them there, if only as a reminder of who is 'lost in bearish hysteria'. Then there are the doomers over on Zerohedge. With 10-15 articles a day, detailing how everything is terrible, and the regular bitching about how the market didn't collapse that day because of QE, I'm way past tired of ZH.

It took me until December last year to realise that the ZH crowd had finally gone off the rails, when they were touting a 1% index drop as a 'bloodbath'. Naturally, a few trading days later, the Dow had climbed some 500pts. At what point will the ZH doomers capitulate? sp'2000 next spring? Or how about 4000, if Yellen decides to raise QE to $250bn a month, with the Fed outright buying the SPY?

No doubt, if I'm right about the broad US/world equity market upside into spring 2014, the coming months will see more of the bearish blogs/sites disappear, as trading accounts are zeroed out, or as some equity bears...simply walk away into the sunset.

There really isn't much tomorrow. There aren't even any Fed people lurking out there.

So, another day, with another set of new highs, and I have to assume we have a very long way upward yet to go.  As many of you now recognise, the irony is that yours truly is now seeking much higher index levels into spring 2014. I will endeavour to be here...until this grand multi-year up cycle completes..and then the inevitable collapse..which as we all know will come....its just a question of when.

Video bonus - from Biderman, on US Govt' services


--
Posted by Trading Sunset at 04:00:00
Email ThisBlogThis!Share to TwitterShare to FacebookShare to Pinterest

The main indexes broke to new highs, with the sp +10pts @ 1754, having earlier spiked to 1759. Especially notable was the NYSE Comp' which broke into the 10,000s for the first time since Oct'2007. Near term trend remains very much to the upside. 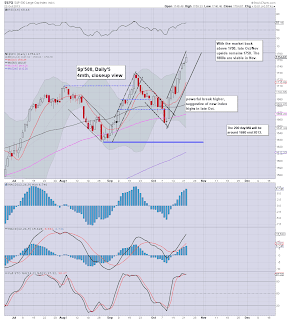 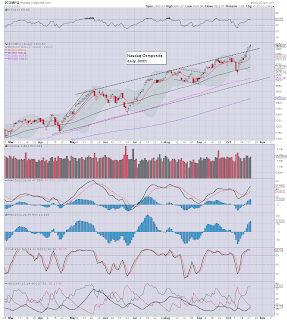 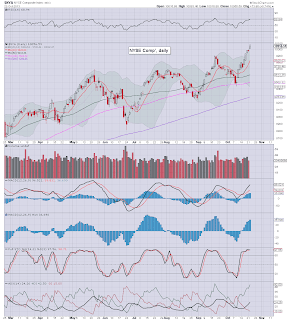 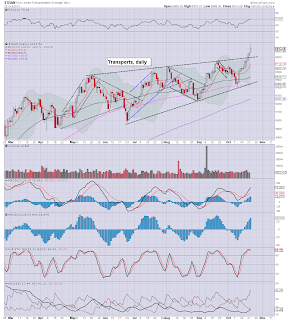 There really isn't much to add. The trend is clearly very bullish, as also supported by the bigger weekly/monthly cycles.

The sp'1800s look viable in November. In my view, I don't think sub'1700s are likely in the remainder of this year. I realise that is a pretty bold call.