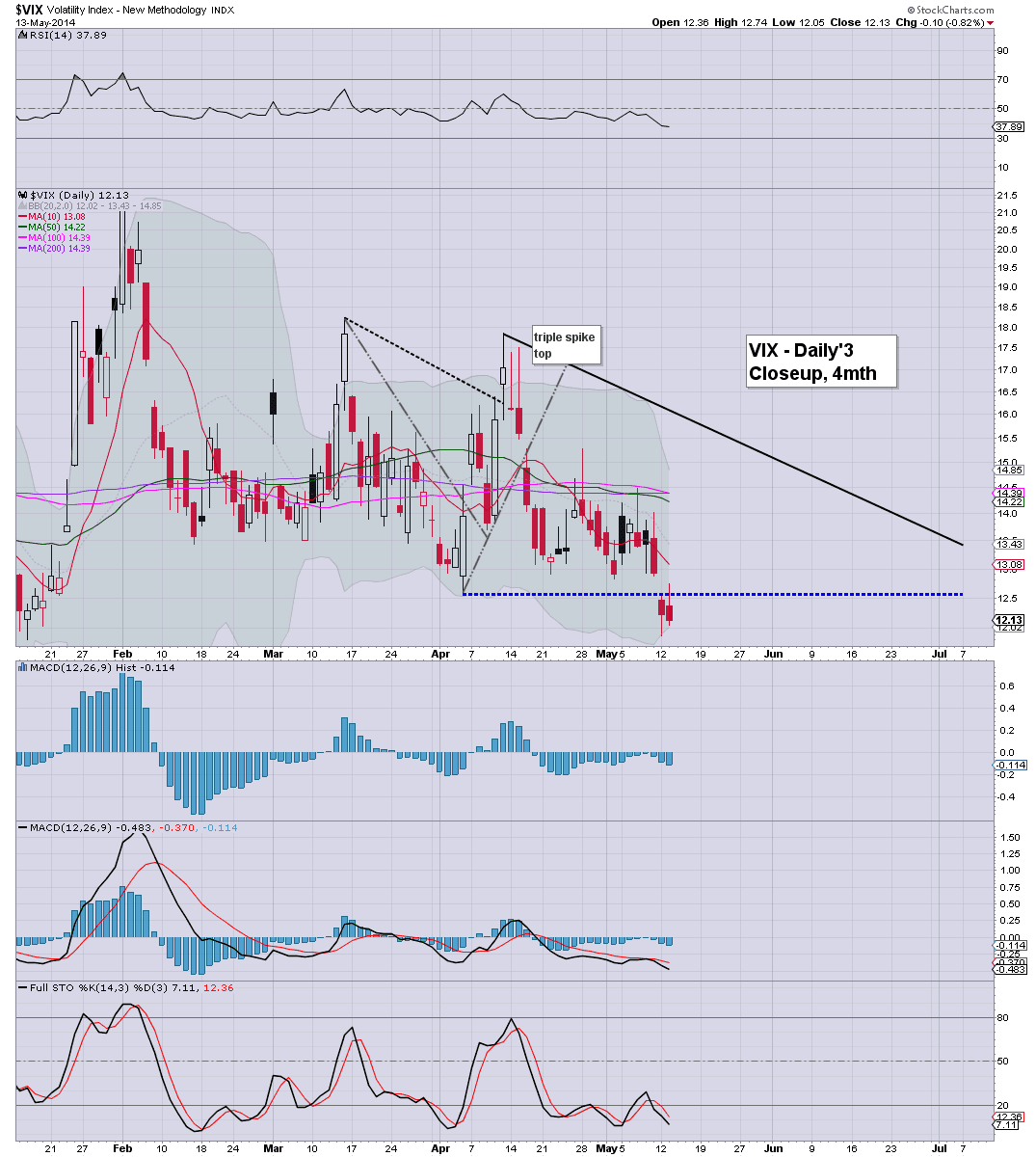 VIX remains low, and barring some sporadic 'scary news story', the market looks comfortably bullish, with another 1-3% of easy upside in the main indexes.

I should note the contracting bollinger bands on the daily cycle, a few more weeks..and the VIX will spike again, but again, even the high teens look a tough target to hit.

Personally, I will try to refrain from picking up a VIX call block (probably Oct' 20 strike), until early June.
- 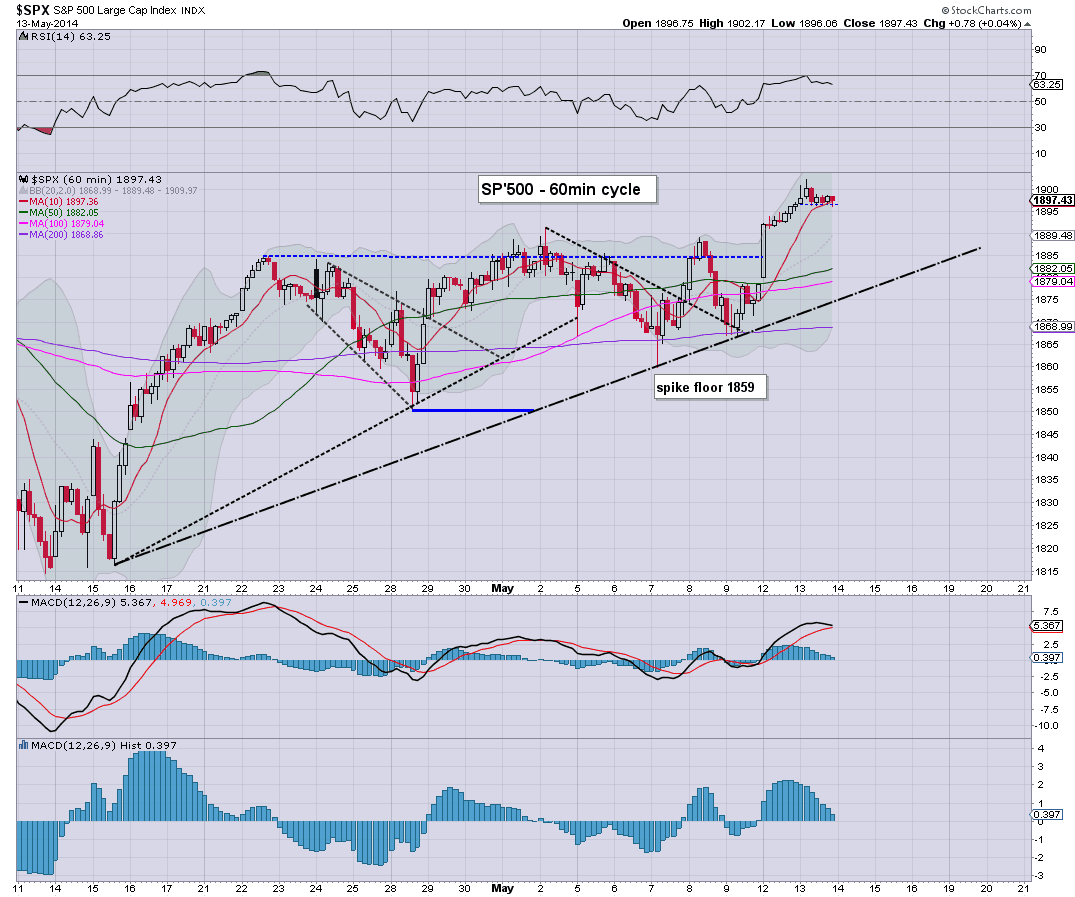 *I hold long overnight, via a small IWM call block.
--

Not the most exciting of days, was it?

All that can be said is that with another new set of index highs, the broader trend remains bullish. The daily/weekly cycles are highly suggestive of 1905/10 in the next day or two, but 1920s do not look viable until at least next week.
-

3pm update - melt into the close

After new historic highs in the Dow/SP/Trans, it makes little difference exactly where the market closes today. Whether sp'1890s..or 1900s...the primary trend remains at least moderately bullish to the 1920s within another week or two. VIX looks set to close weak..11s are viable. 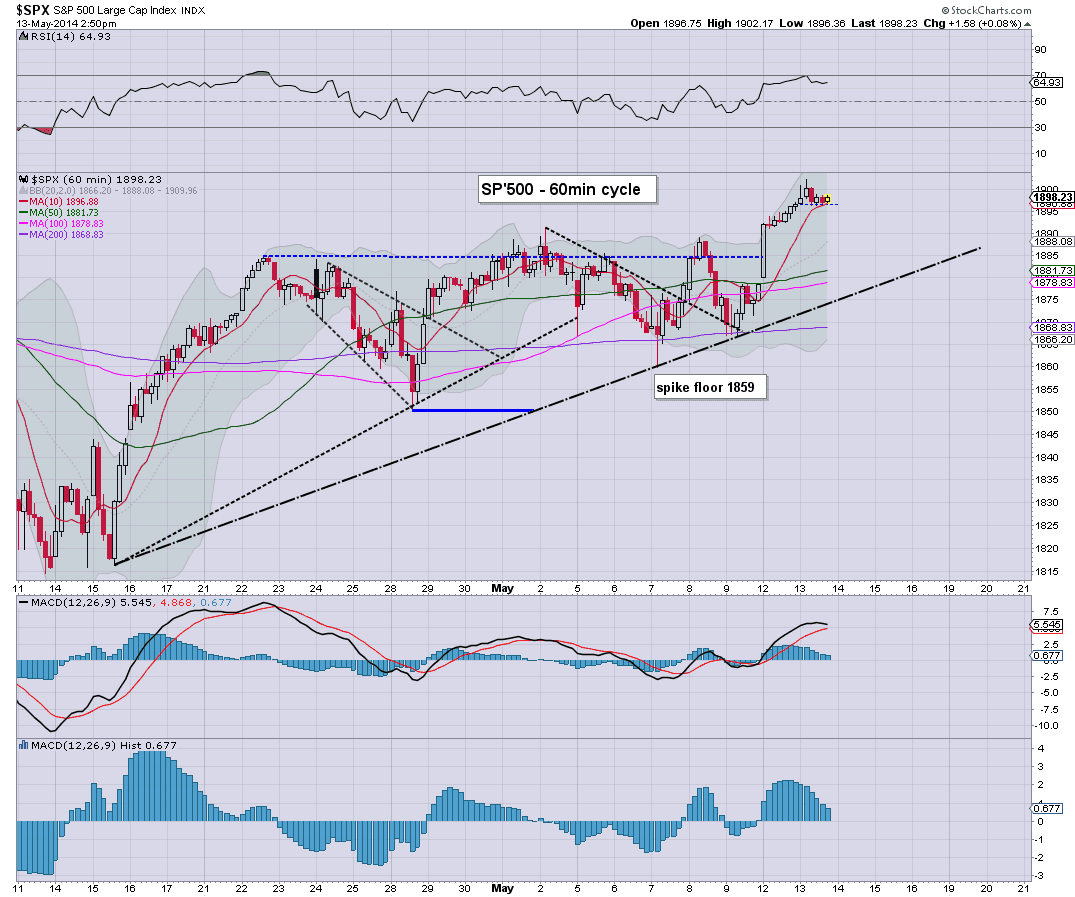 *I will very likely hold long overnight, via a small IWM call block.
--

As the lightning bolts start to hit London city this evening....lets see if the bull maniacs can achieve a daily close in the sp'1900s. 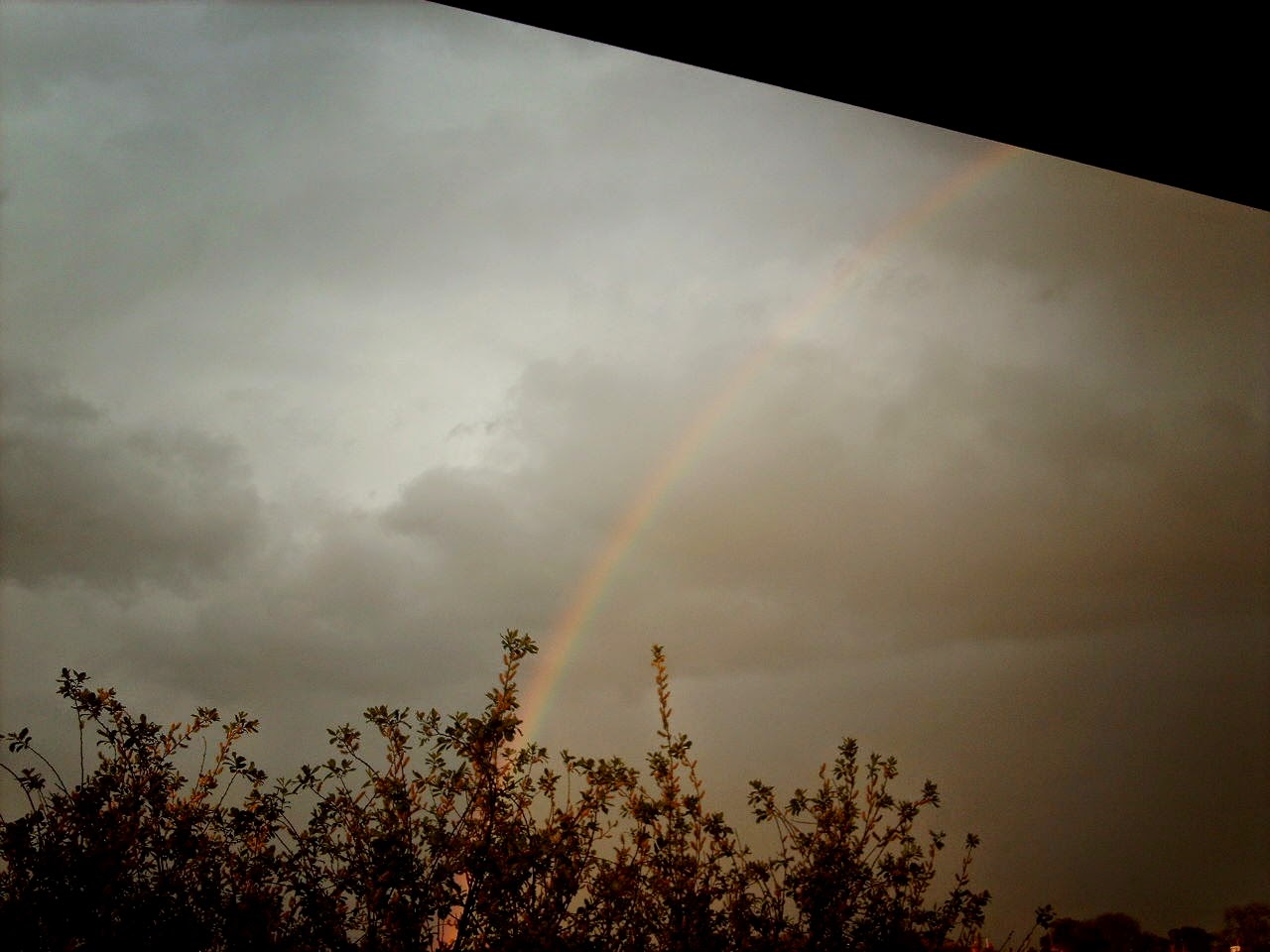 All that is missing is a unicorn...maybe I'll get lucky.
-

3.18pm.. minor weak chop....with the R2K/Nasdaq most certainly set to close moderately lower, although that is still a minor retrace of what was a big jump yesterday.


3.47pm.. It is notable that despite a little weakness in the R2K/Nasdaq, the VIX is still red.

US equities continue to see minor churn, with notable weakness in the R2K/Nasdaq. Yet...the market did break another set of new highs today, and the broader trend is unquestionably still to the upside. Metals are starting to slide..Gold -$4. 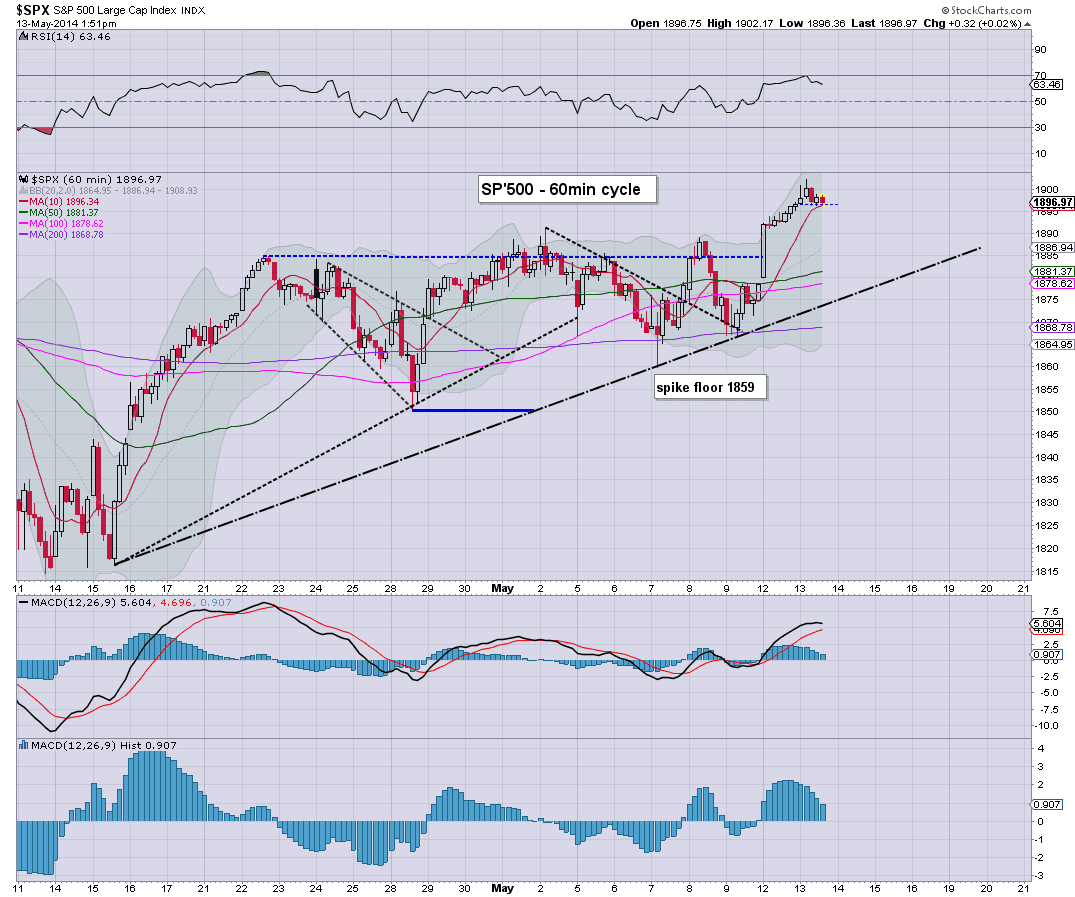 *I remain long, via a small index block, will likely hold overnight.
--

For me, the only issue is whether the sp' can manage a daily close in the sp'1900s..not that it is necessary today.

A new high is a new high....(ohh gods, am I really starting to sound like Oscar Carboni?). 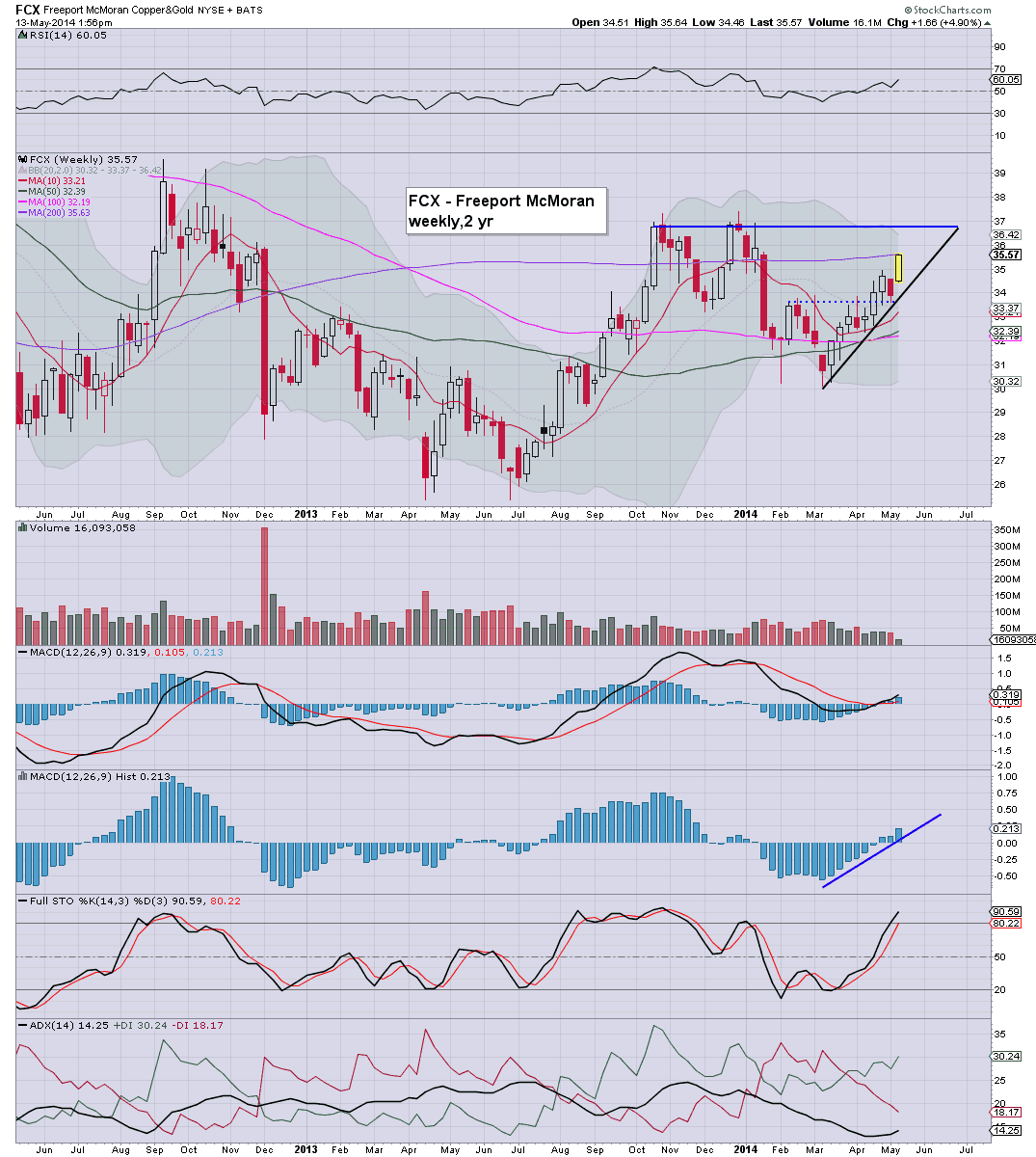 I see a few out there talking about a sig' drop in equities in the immediate term...and I simply am bemused at that...considering ALL cycles are currently bullish.
Posted by Trading Sunset at 18:54:00
Email ThisBlogThis!Share to TwitterShare to FacebookShare to Pinterest

A little late morning minor weakness (especially in the R2K), but the main market looks set to claw higher into the close. Metals are a touch weak, Gold -$1, with a major snap lower seemingly likely Wed/Thursday. 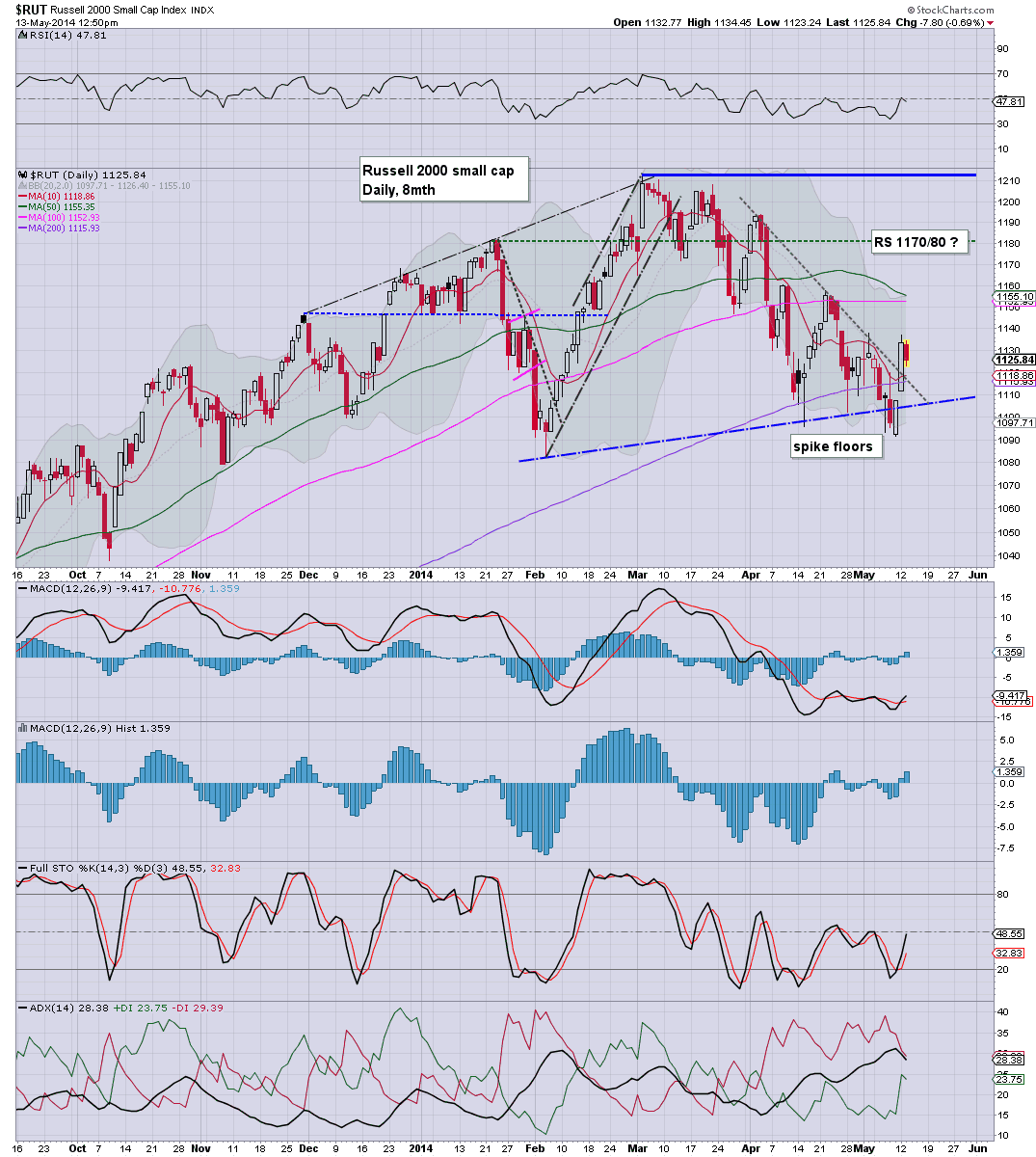 *After some consideration, I picked up a small index long, via IWM. I realise some might roll their eyes at that one 'ohh lookie, permabear goes long just under sp'1900, its clearly a sell signal!'. Yet..seriously, equity bears look powerless, and I have to treat all minor pull backs..as just that.

I will hold overnight, unless there is a very significant rally into the close.
--

So...3 hrs to go..lets see if Mr Market can manage its first daily close in the sp'1900s. All cycles are supportive of it.
Posted by Trading Sunset at 17:51:00
Email ThisBlogThis!Share to TwitterShare to FacebookShare to Pinterest

US equities are seeing some minor price chop, but the underlying pressure is absolutely still there. Daily/weekly charts are offering sp'1905/10 in the immediate term..with the 1920s not viable until next week. Metals are broadly flat, whilst Oil is higher by 0.7%. 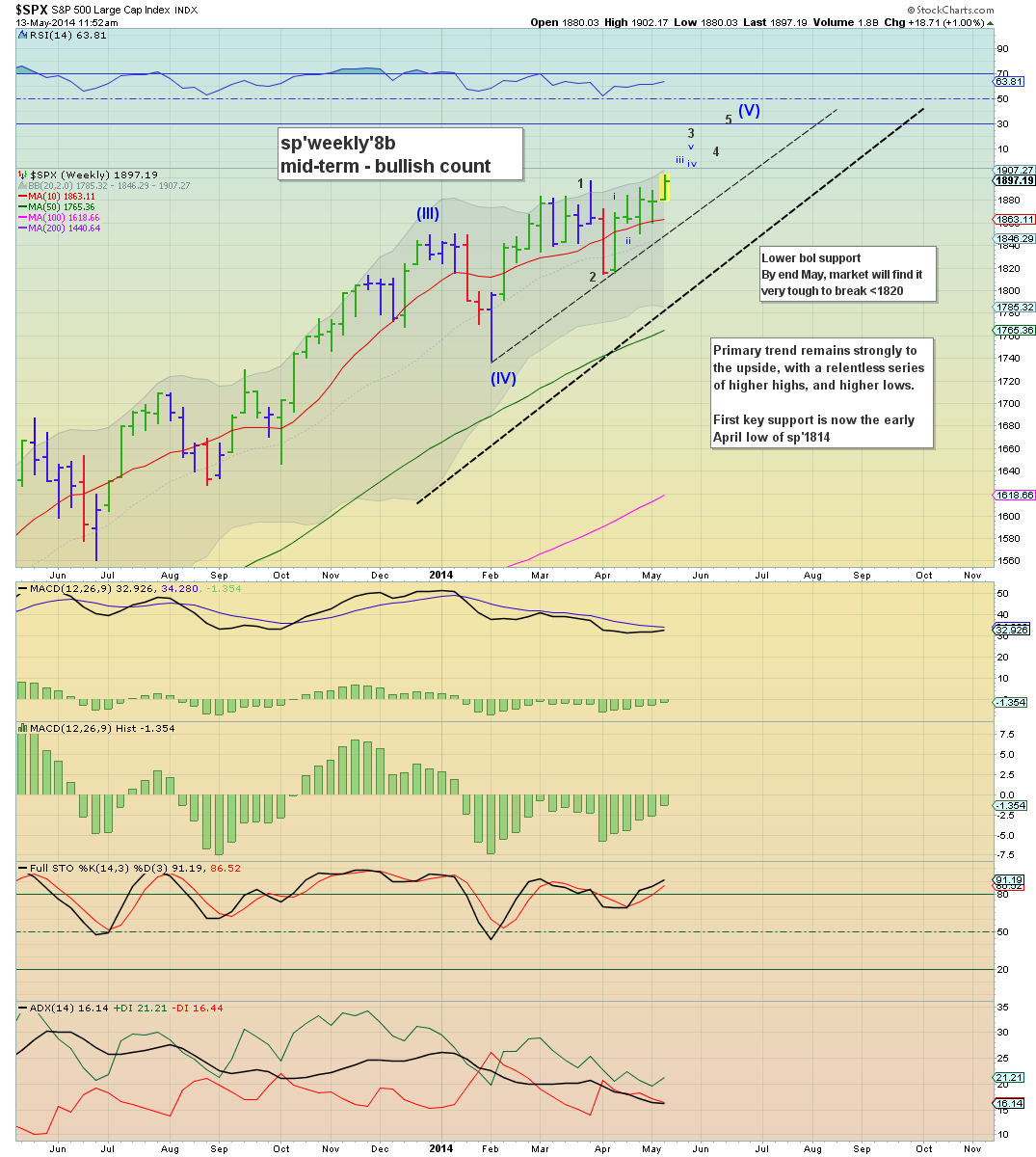 *I have little interest in the smaller time frames right now, and will stick to highlighting the bigger cycles.
--

So...we have now seen new historic highs in the Trans, Dow, and SP'. Even if we do battle higher for another 2-3 weeks, I find it difficult to envision new highs in the R2K/Nasdaq.

Regardless, I won't be shorting this market for some time..probably...weeks.
-

Equity bears are being slowly ground into dust, as the Dow/SP/Trans continue to melt to new historic highs. There is zero power on the downside, and sp'1905/10 looks viable in the near term. Metals are back to flat, whilst the VIX is a touch red..and the 11s look due. 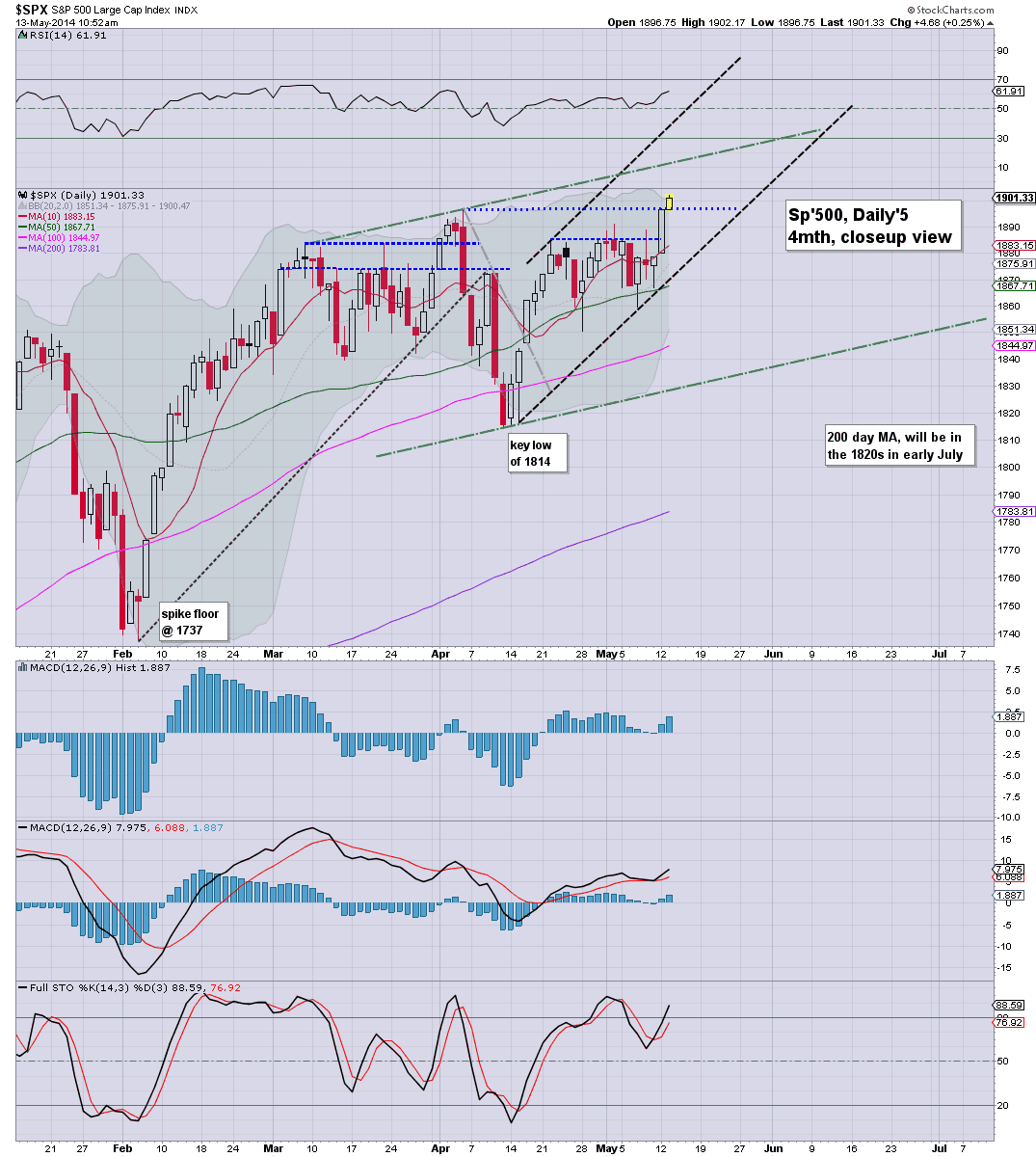 I'd added a green channel..that might reflect what will be some soft resistance in the 1905/10 zone this week.

Indeed, right now, I'm already looking ahead to the next FOMC of June'18, when QE-taper'5 will likely occur.

For me, that would appear the next prime opportunity for the bears...but that is a clear FIVE weeks away.


11.26am.. micro down cycle....not to be taken seriously.  well, at least I can't.
Posted by Trading Sunset at 15:56:00
Email ThisBlogThis!Share to TwitterShare to FacebookShare to Pinterest

US equities break new historic highs in the Dow/SP/Trans, and even the R2K/Nasdaq are continuing to climb. Metals remain a touch weak, Gold -$2. Equity bulls look set to 'hold the market together' for a few more weeks...probably getting stuck in the 1920/50s. 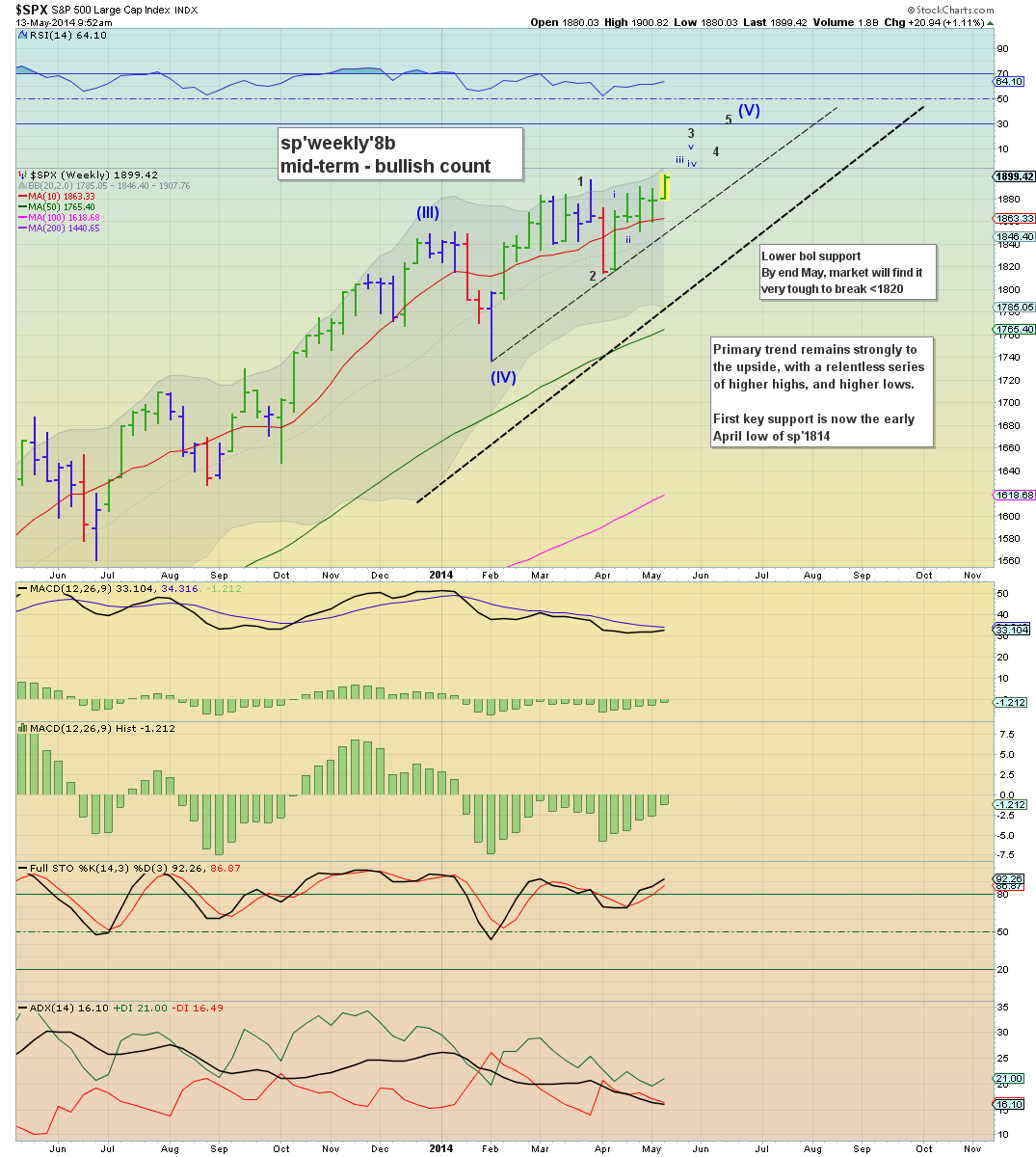 To be clear, I do not think the 2000s are viable this side of the summer..or even this year.

As many recognise, there are HUGE divergences, seen most clearly on the giant monthly charts.
-

*I remain on the sidelines (having exited all longs yesterday)..and I might be content to do nothing for some weeks..and merely await a big turn on the weekly cycles.


10.38am... not much to note really... market is merely in melt mode...bears getting ground down..as systematic stops are taken out.

1920s not really viable this week...but next...yes!
Posted by Trading Sunset at 14:53:00
Email ThisBlogThis!Share to TwitterShare to FacebookShare to Pinterest

Good morning. Futures are a little higher, sp +3pts, we're set to open at the 1900 threshold. Metals are weak, Gold -$5, with Silver -0.6%. Equity bulls look set to break new historic highs in a third index today, although there is upper bol' resistance in the 1905/10 zone. 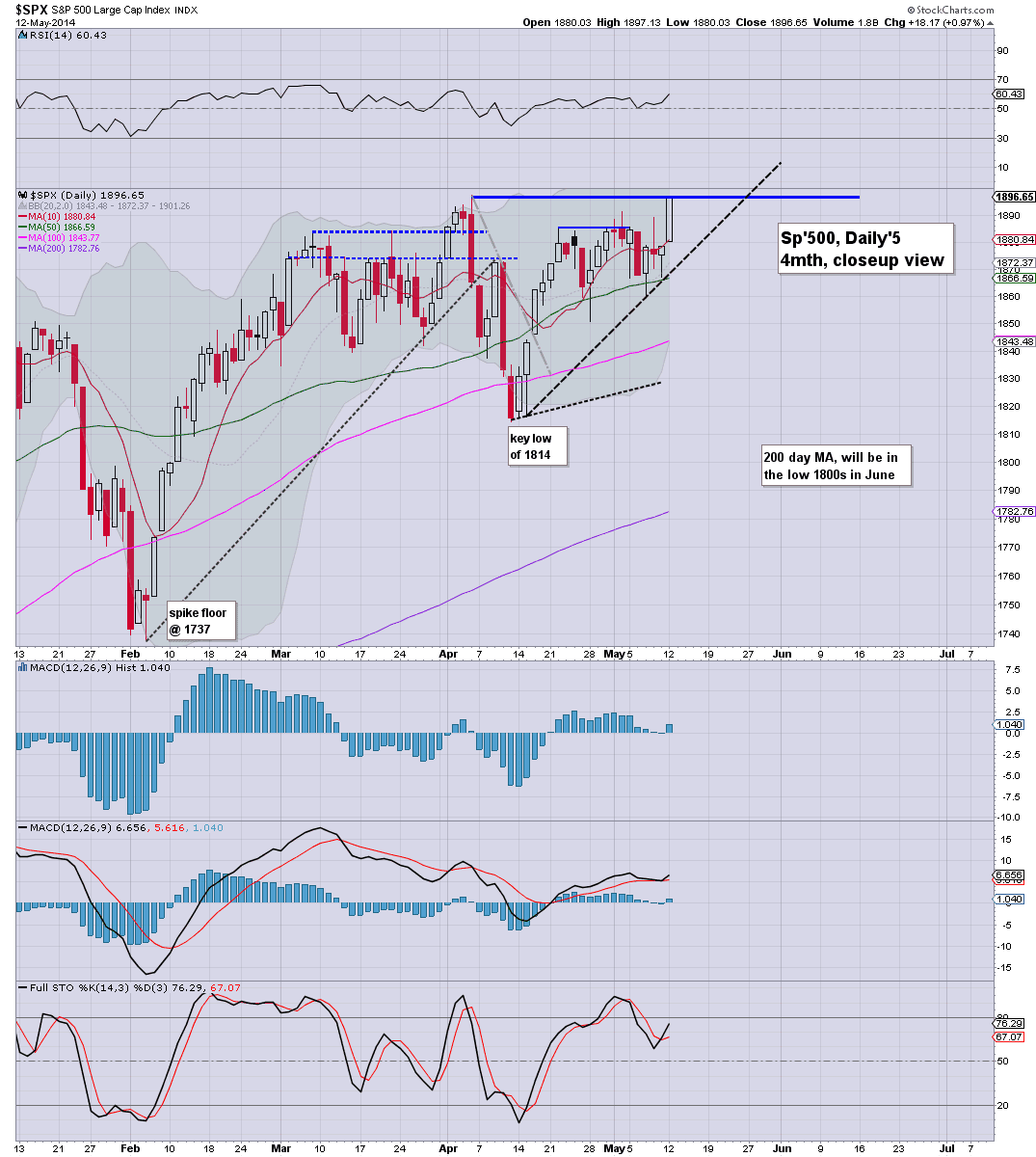 The 1940/60 zone in my view is NOT viable until early June - daily/weekly charts simply do not allow it. So..for those that are seeking that as a top, I'd have to assume we're looking at another 3-4 weeks of 'broad upside'.

I still find it somewhat amusing how I was bullish across the last few weeks, whilst Mr Carboni was flipping back and forth like a stranded dolphin on Laguna beach.
-

*urghh..I just noticed, the last post never did get published..I set the time wrong. Oh well, it is there to be read now... 'New highs for the bull maniacs'.

Good wishes for Tuesday trading!
Posted by Trading Sunset at 13:29:00
Email ThisBlogThis!Share to TwitterShare to FacebookShare to Pinterest

New highs for the bull maniacs

The week began particularly well for the equity bulls, with new historic highs in the Dow and Transports. The sp'500 looks set to follow into the 1900s this week, and bulls could remain in broad control until late May/early June. A major turn lower is coming though. 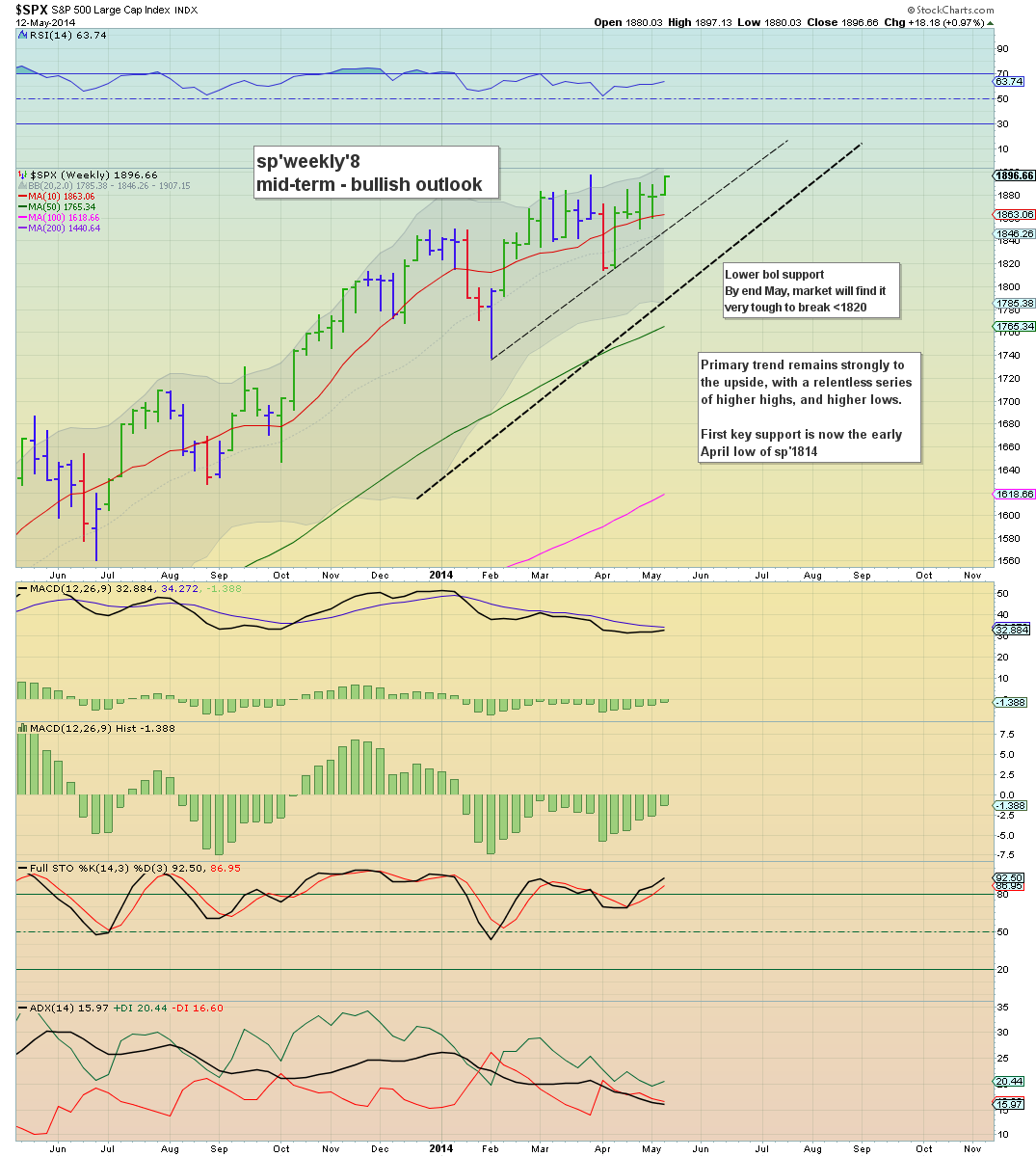 The above chart remains a simple one...a fifth consecutive green candle, and there is simply nothing bearish in the immediate term. Sp'500 looks set to break into the 1900s tomorrow, or later this week, it really makes no difference.

Tuesday will see retail sales data, and if that comes in reasonable, then we will likely see sp'1900/05 tomorrow morning.

Yours truly has battled hard in the past few weeks, and I have valiantly tried to trade the long side..to some success. With the market higher this morning, I bailed on 4 long positions (CHK, DO, SDRL, and STX).

The good thing, at least I've not been short since sp'1814, and so..when the current mult-week up wave does complete, then I'll be in a good state to re-short. I want to see 2-3 blue candles on the weekly charts, and then I'll be very comfortable to go heavy short this freak show of a market.

US indexes closed significantly higher, with new historic highs in the Dow and Transports. The sp' settled +18pts @ 1896. The two leaders - Trans/R2K, closed higher by 1.9% and 2.4% respectively, Near term outlook remains bullish into the sp'1910/20s. 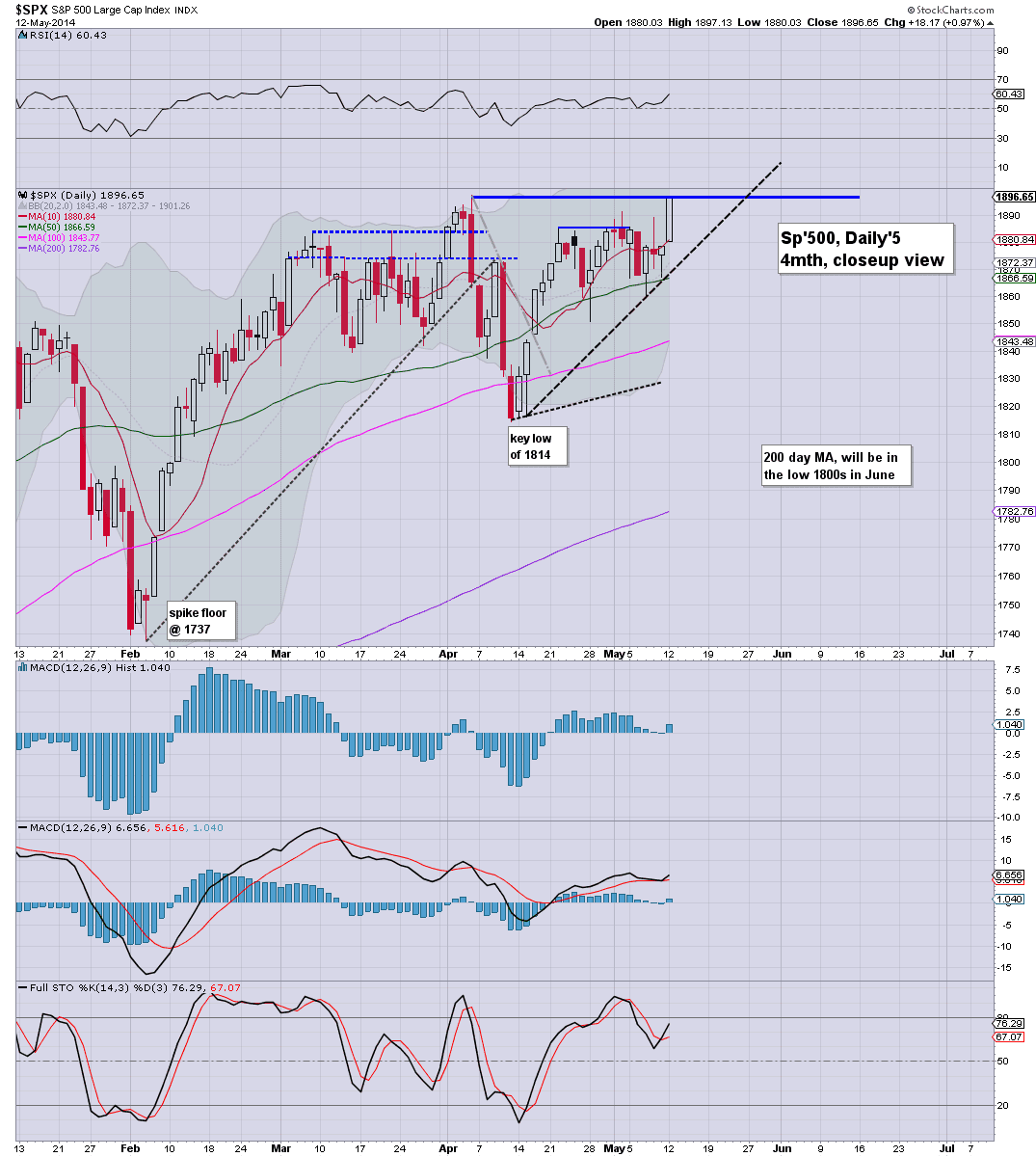 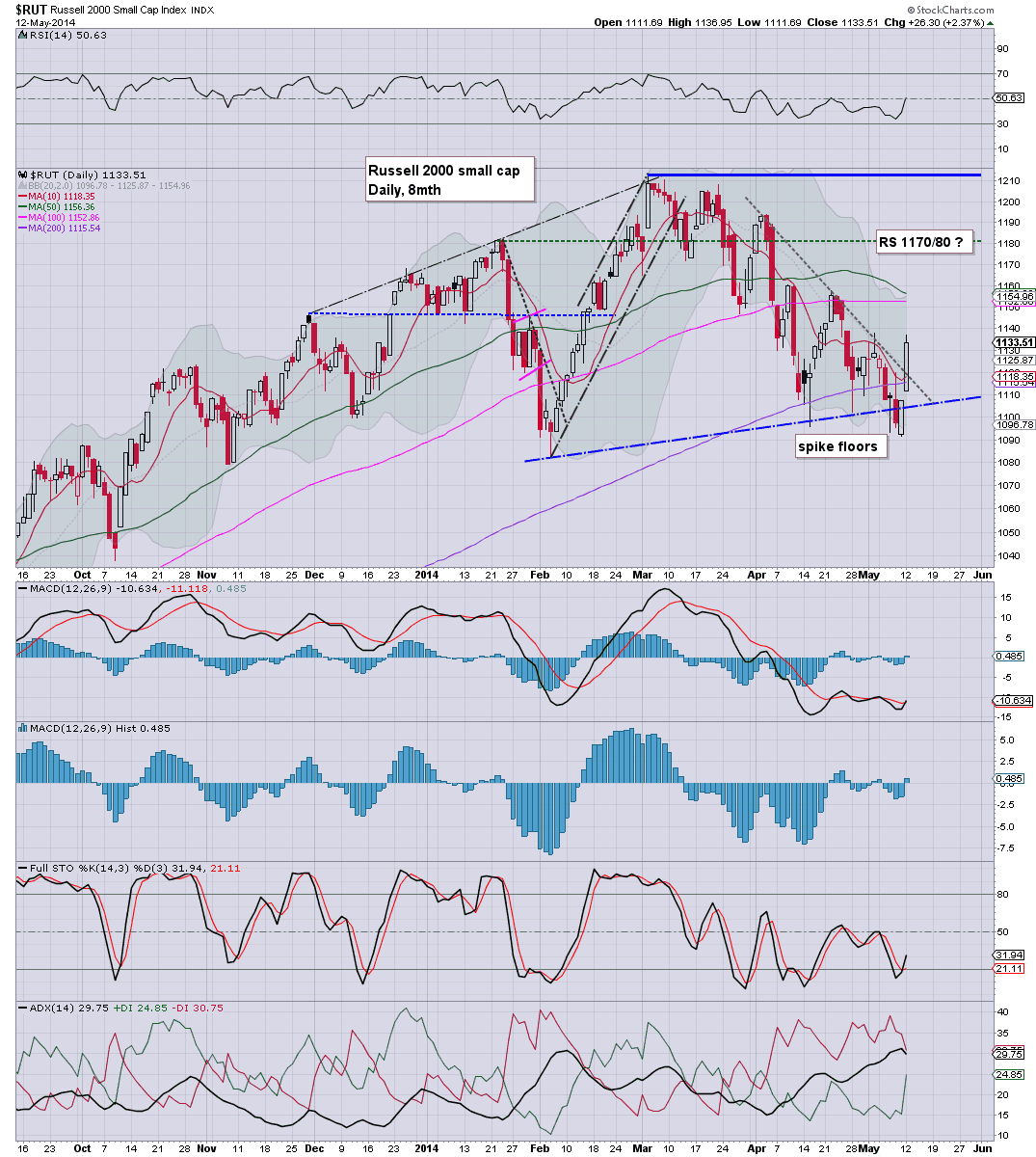 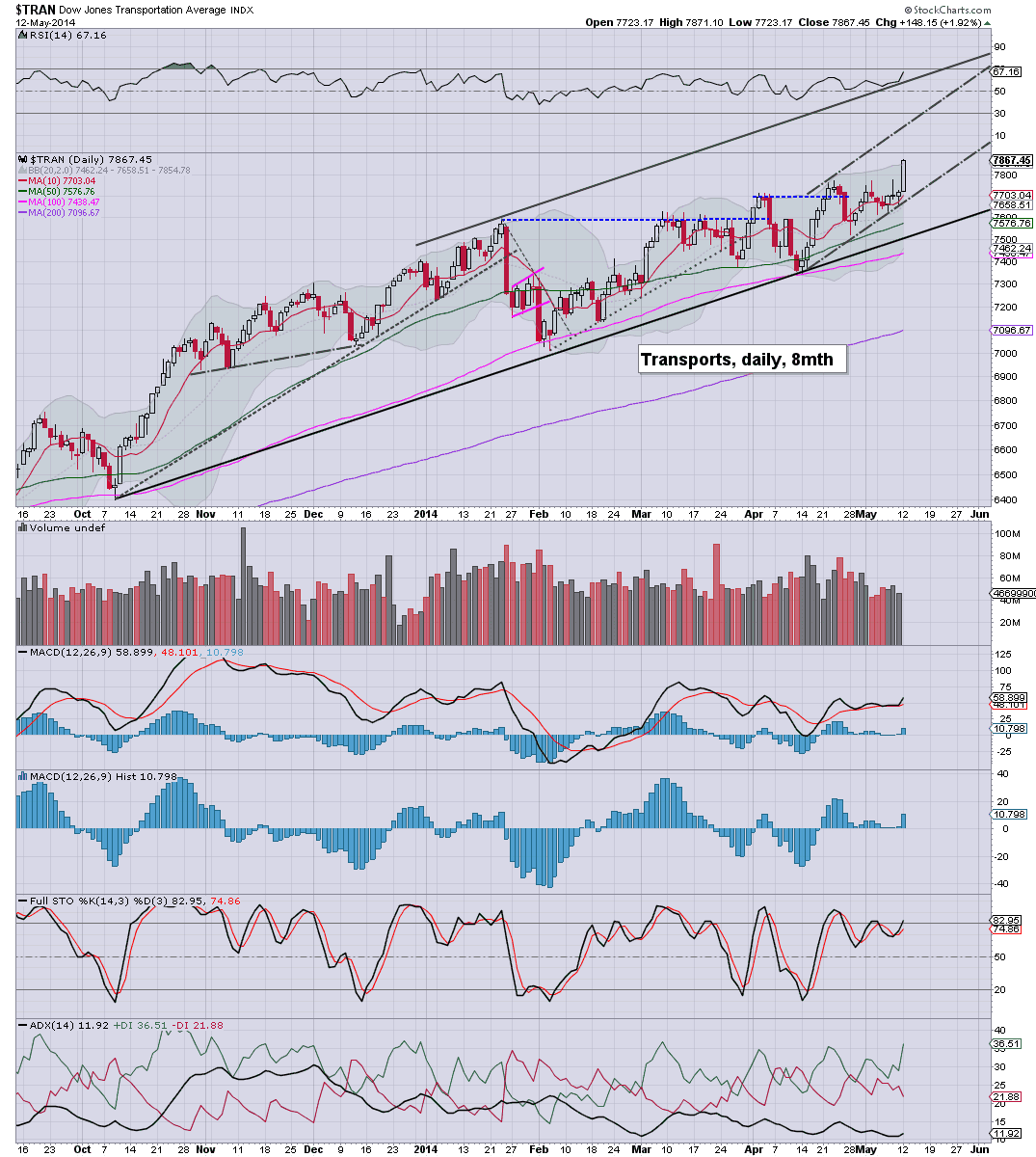 So..the week has begun in arguably the best manner possible for the equity bulls. We have all indexes pushing higher, with breaks of declining resistance/trend on the R2K/Nasdaq.