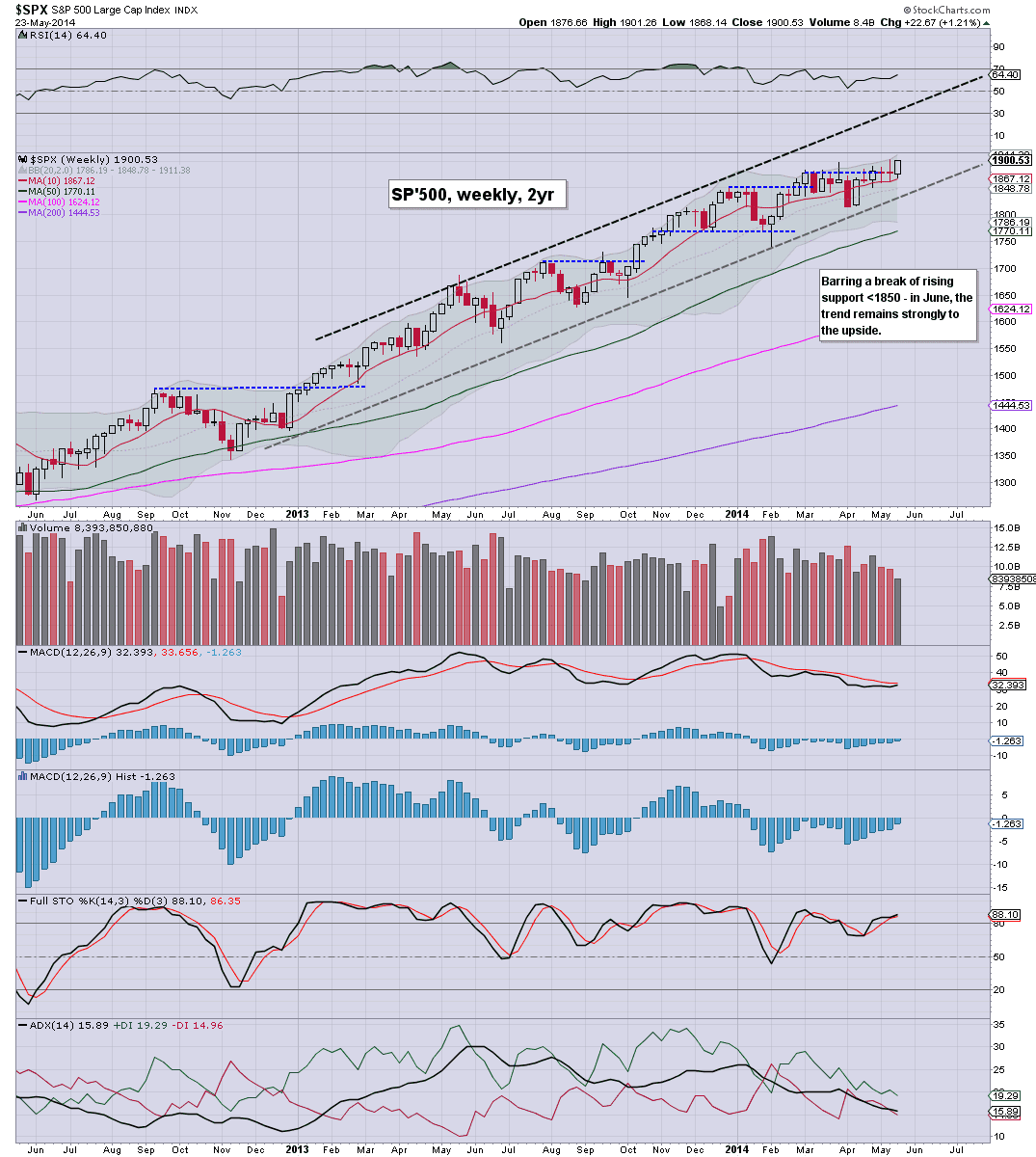 The sp' slipped to 1868 on Wednesday, and was a mere 3pts above the 10MA. Renewed strength into the Friday close, saw net weekly gains of an important 1.2%. Near term outlook is bullish, with viable upside to 1910/15.

Underlying MACD (blue bar histogram) cycle ticked higher for the sixth consecutive week, and is due to turn positive either next week..or at the start of June. The 1940/60 zone looks to be just about viable by mid June. 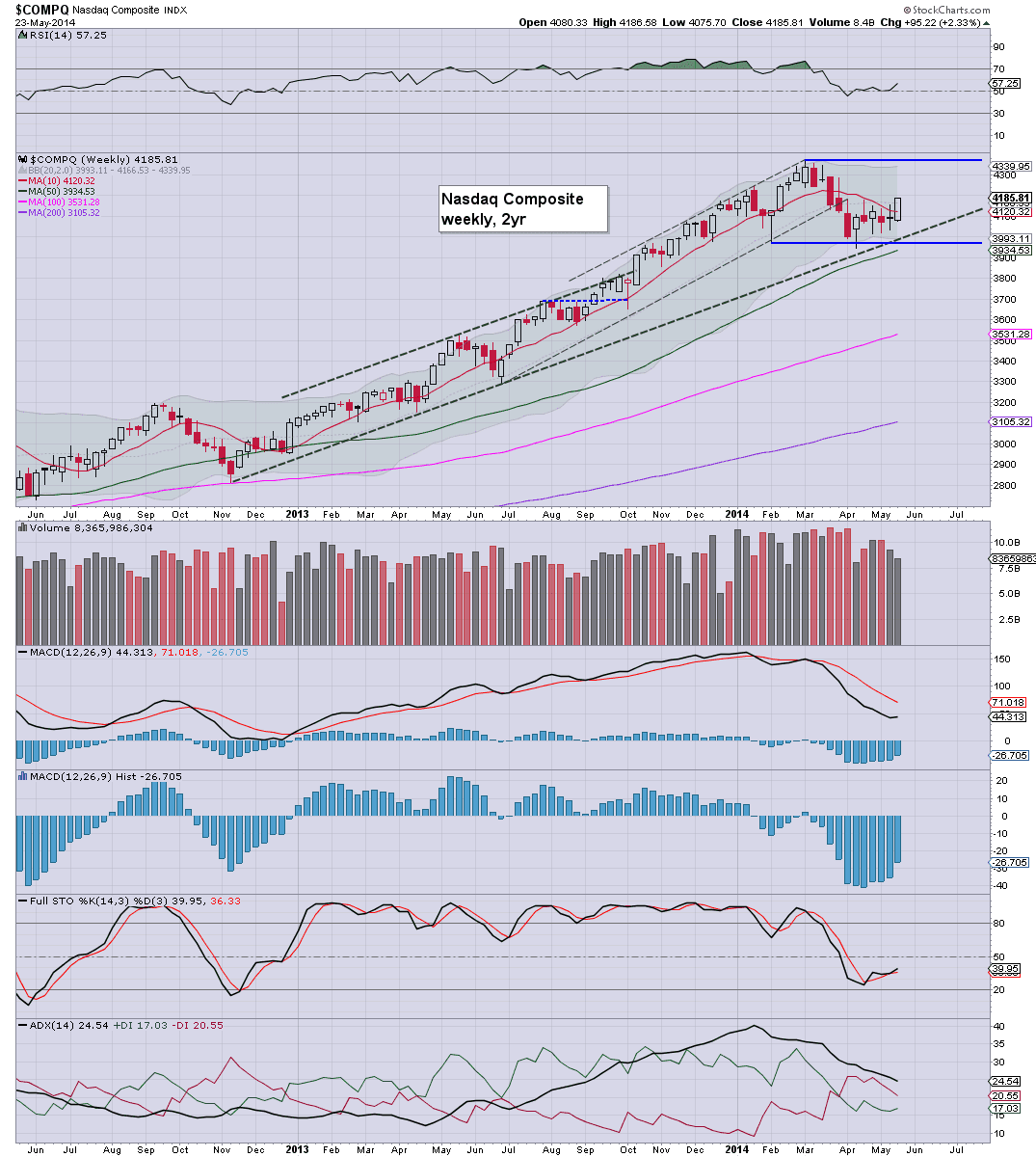 The tech' was the leader this week, with net weekly gains of 2.3%. This was the first weekly close above the 10MA since mid March, and that is an important achievement for the equity bulls. There looks to be viable upside to 4250/4300 into mid June. I would be somewhat surprised if the Nasdaq can break a new high >4371, this side of the summer. 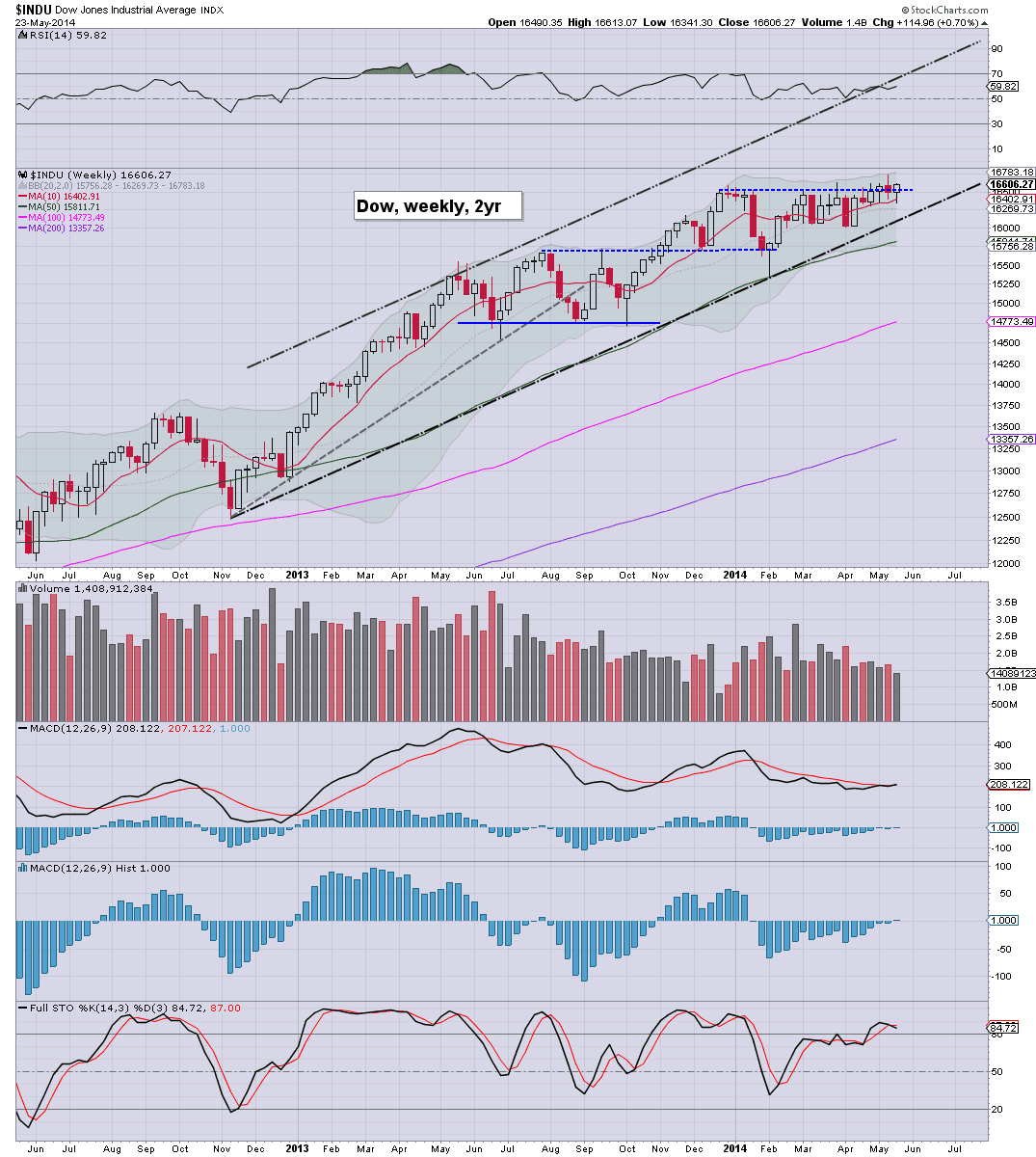 The mighty Dow gained just 0.7% this week, but is comfortably above the danger zone of 16k. Indeed, the big 16000 threshold is critical to the equity bears, and the weekly close in the 16600s makes for a good 3.5% buffer zone for the bulls.

Underlying MACD cycle is now fractionally positive, for the first since early January. There is nothing bearish here, and weekly charts will be offering the 16900/17100s by mid June. 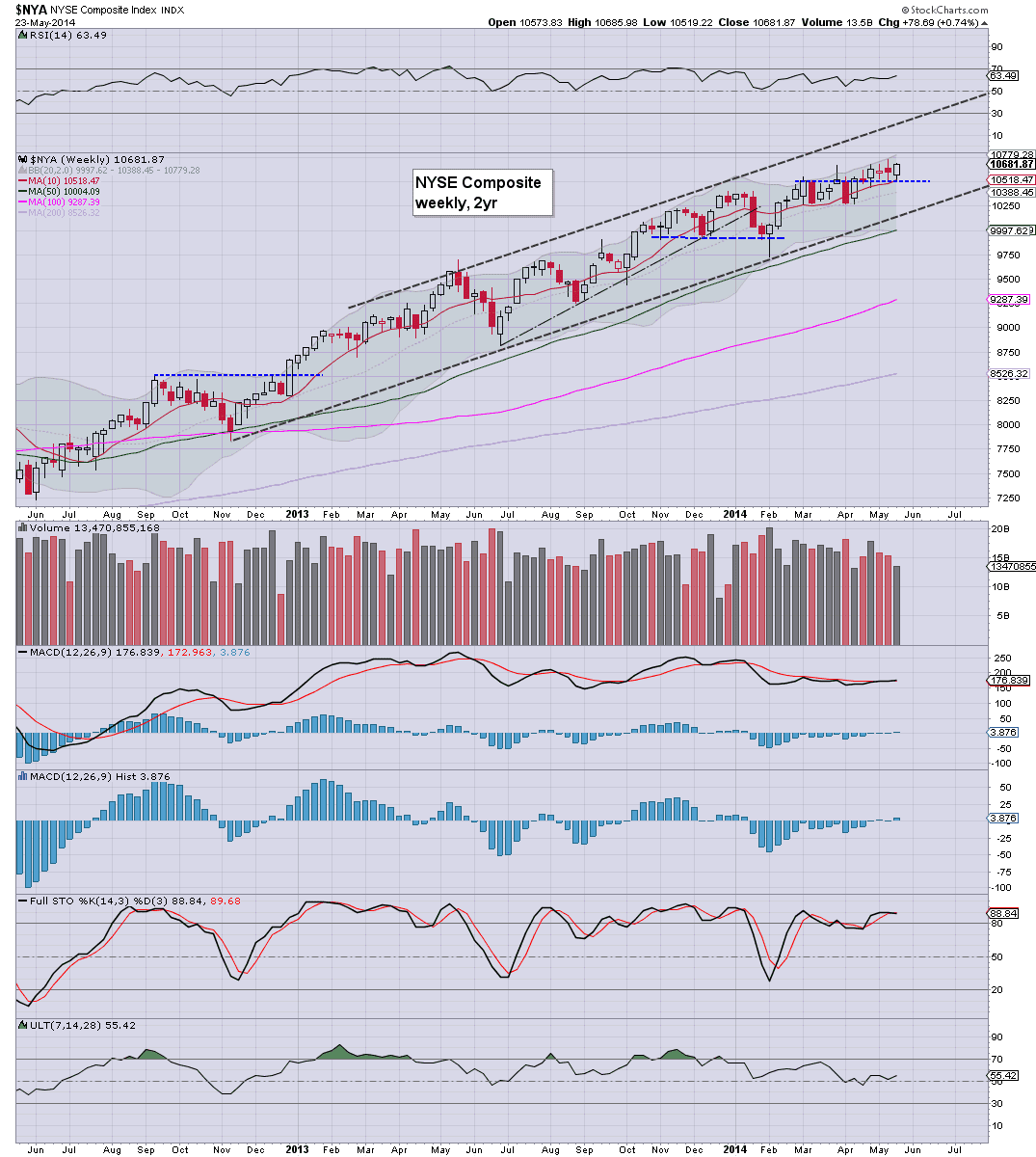 The master index gained a little over 0.7% this week, making a new historic closing weekly high of 10681. As I have been noting for some time, the 11000s look somewhat difficult to reach, this side of the summer. However, trend is clearly still broadly to the upside, and underlying MACD cycle is now positive. 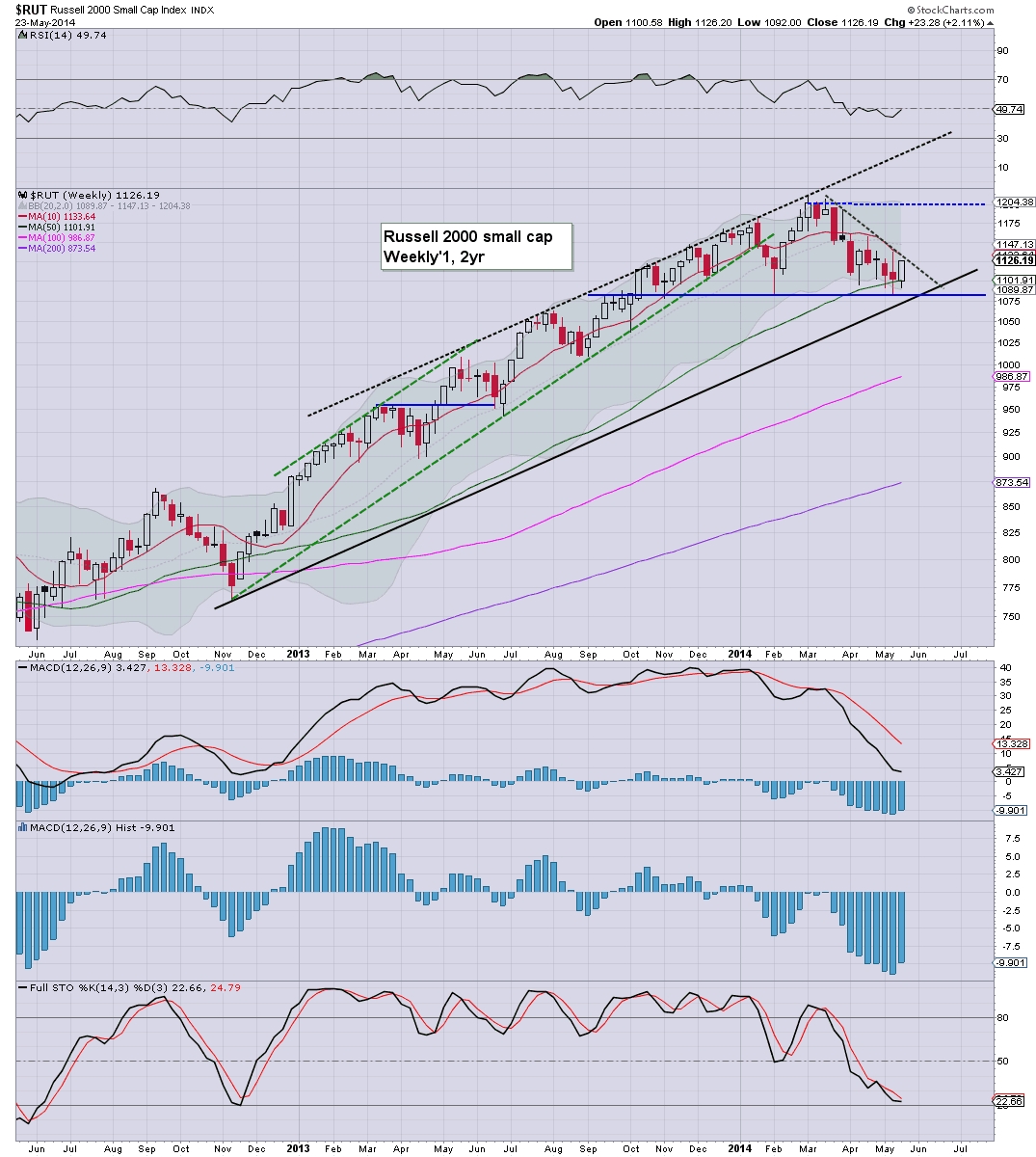 The second leading index looks to have secured a floor in the 1080s - matching the Feb' low. The big question is whether the R2K is building a RS, as part of a very large H/S formation. So long as the R2K does not go much above 1170/80 in the new multi-week up wave, this will remain a very valid bearish scenario. 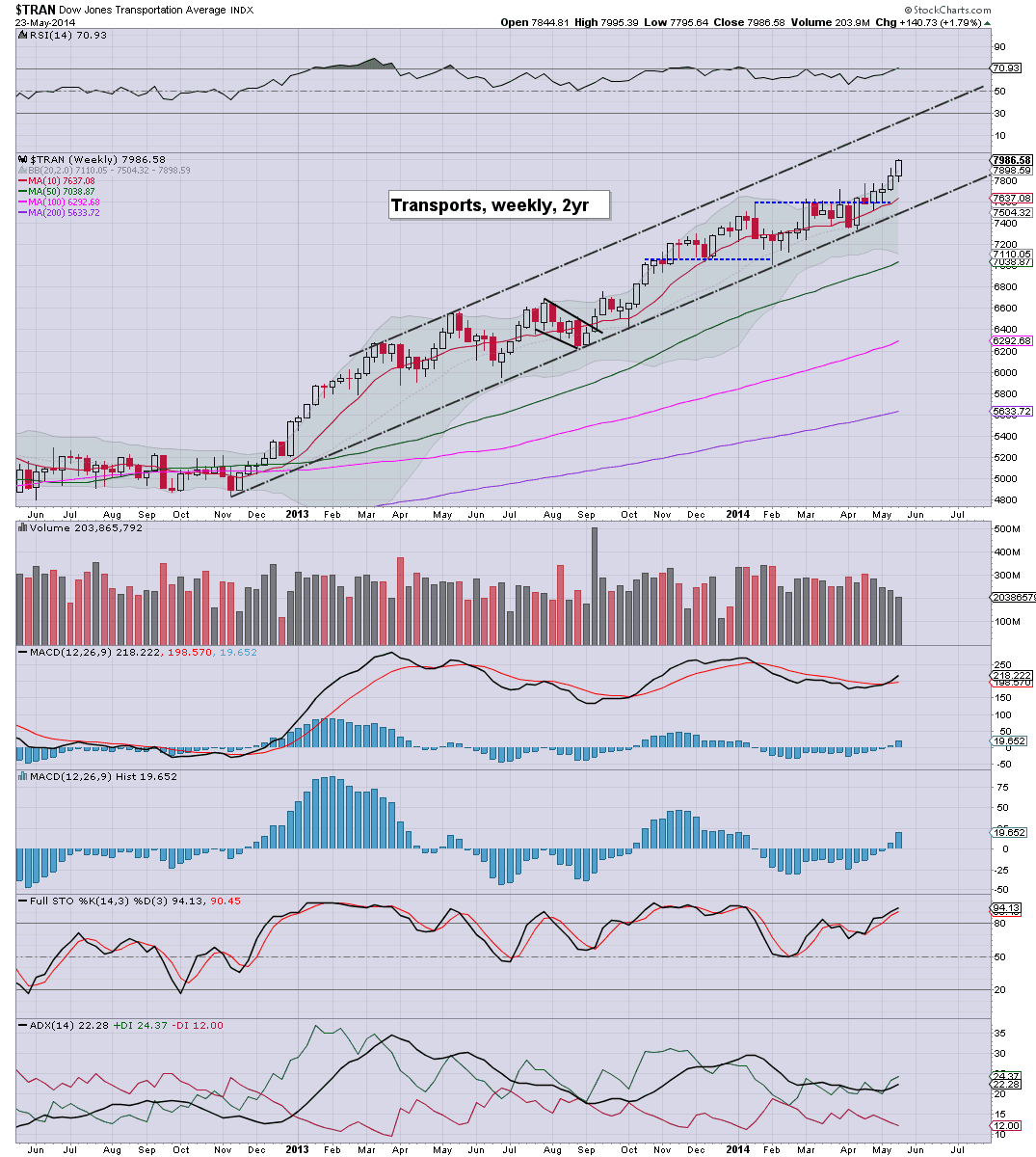 The 'old leader' gained another 1.8% this week, the fourth consecutive weekly gain, breaking a new historic high of 7995. The 8000s seem a given early next week, with the bigger monthly charts offering the 8150/8250 zone by mid June.

The market continues in much the same way as it has since the key intermediate floor of Oct'2011, giving little downside teases to the bears...but never with any real power - as especially reflected in a VIX that is currently unable to even spike into the mid teens.

With the Trans breaking a new high, the Dow and SP' look set to follow. The only issue is whether the R2K/Nasdaq can do the same. Right now, I'm guessing the latter two indexes have already put in key tops for this year.

So..despite a fair bit of chop this year, the broader trend remains bullish. Yet, it won't last forever, and I am trying to remain highly mindful that the recent weakness in the R2K/Nasdaq could well be an early warning of trouble for the broader market.

In terms of the R2K, so long as we don't break above 1200 in the new multi-week up wave, it is very possible we are seeing a multi-month H/S formation develop. I'm certainly not the only out there with this scenario in mind. 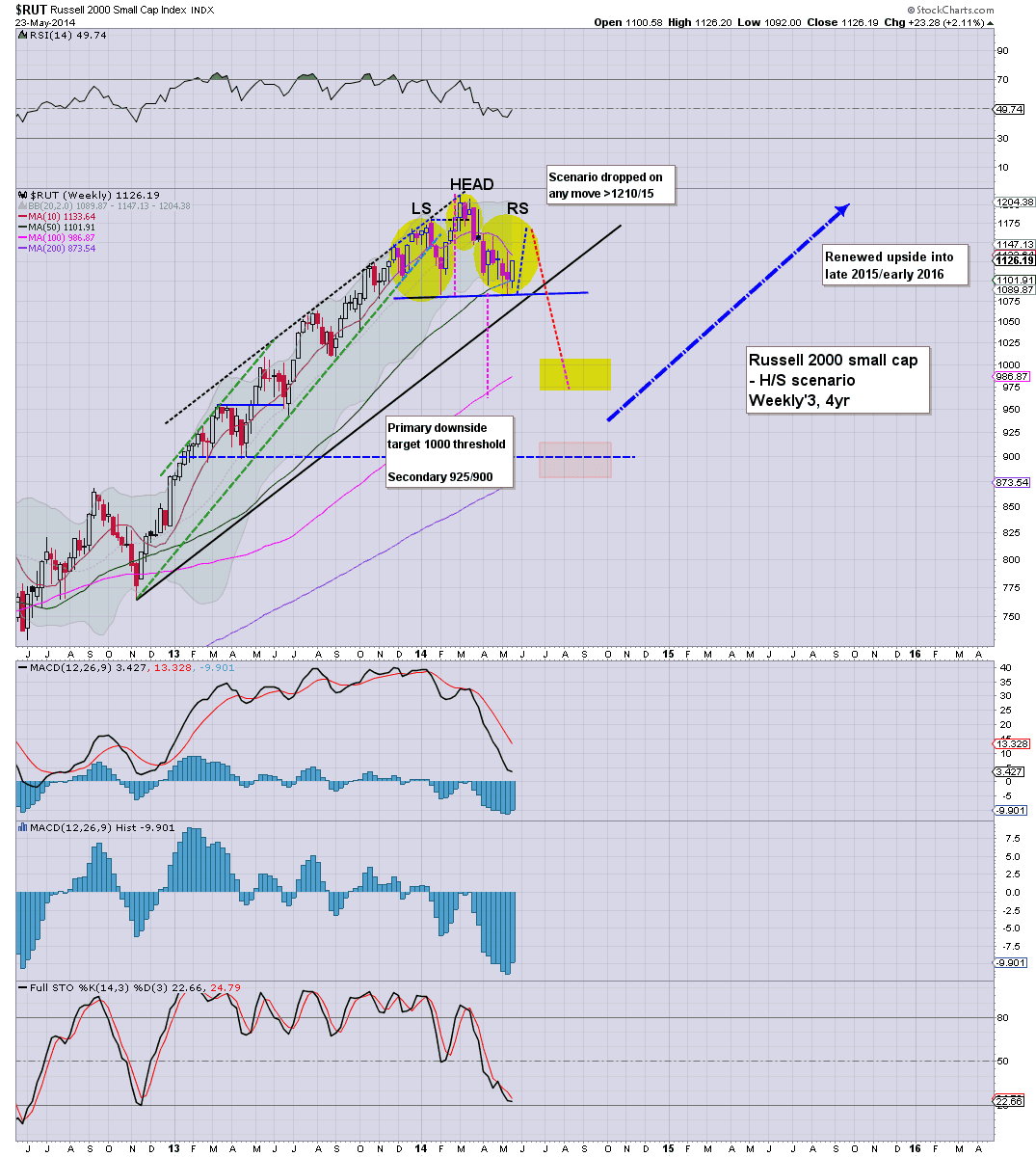 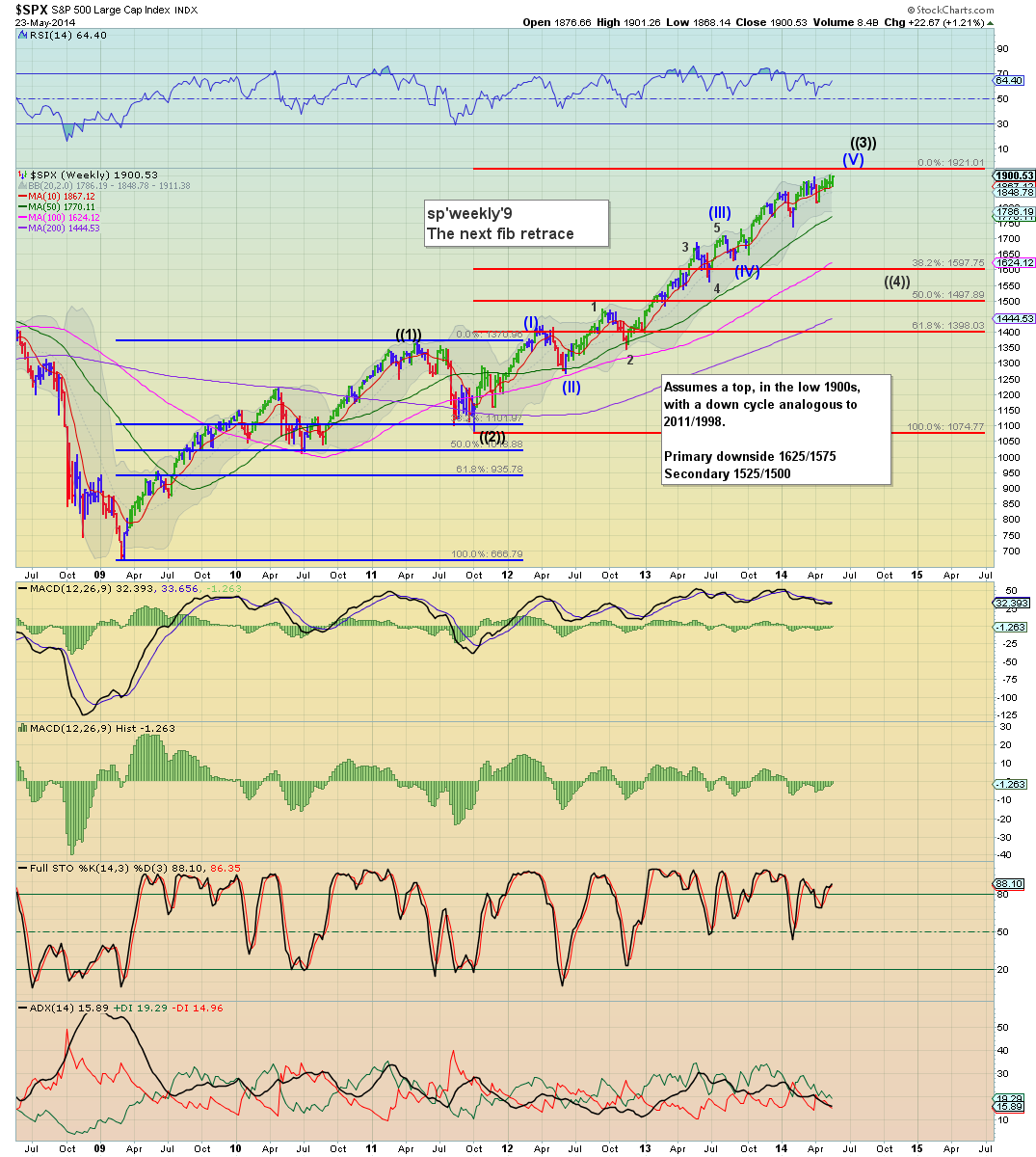 Regardless of whether the market maxes out in the 1910/20s..or even a little higher, the next fib retrace, should at least take us back to the low 1600s. That would make for a pretty impressive 250/300pt drop, certainly one that the equity bears could massively profit from.
---

The shortened week begins on Tuesday with Durable Goods orders. A soft number could easily give the market the excuse to cool down a little. There is also some housing data and consumer confidence.

Wed' has nothing of significance. Thursday will see the usual jobs data, but more importantly, the second reading for Q1 GDP. It is very possible that the initial reading of 0.1% growth might be revised to a moderately negative number. Considering the near term equity outlook, even if GDP is revised negative, I am still resigned to continued upside.

Friday will see pers' income/outlays, Chicago PMI, and consumer sentiment. That will be more than enough to give the market a kick..one way or another. There are also two fed officials on the loose during normal trading hours.

It is probably also important to keep in mind that Friday is the last trading day of May, and there will be the usual end-month issues. I'd certainly think the situation will favour the bulls.

I held to the original plan, and am entirely on the sidelines until the market opens again next Tuesday. Considering the weekly index gains, I will look to pick up a small index long next week -on the next hourly down cycle. Certainly, I can not consider any index shorts/VIX longs for another few weeks.

Perhaps the market will max out around the time of the next FOMC - June'18, when QE taper'5 will be announced. As ever... I endeavour to keep an open mind.

Enjoy the long weekend
Posted by Trading Sunset at 17:00:00
Email ThisBlogThis!Share to TwitterShare to FacebookShare to Pinterest

A sixth week for the bull maniacs

The early April low of sp'1814 continues to fade far below, and by mid June, we'll surely be a full 100pts higher, in the sp'1910/20s. Whether the market will then break lower - around the FOMC of June'18, remains the next major issue. 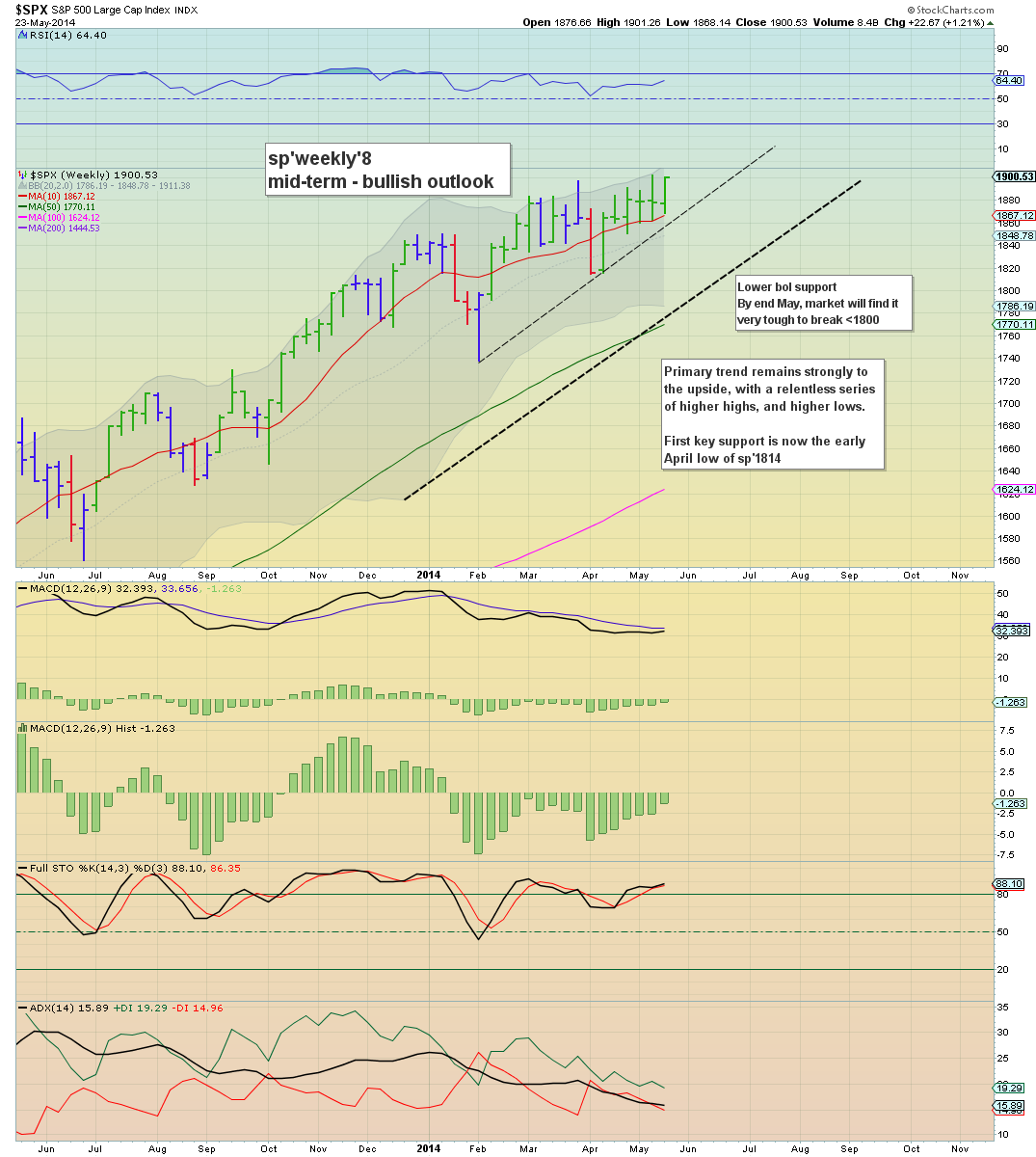 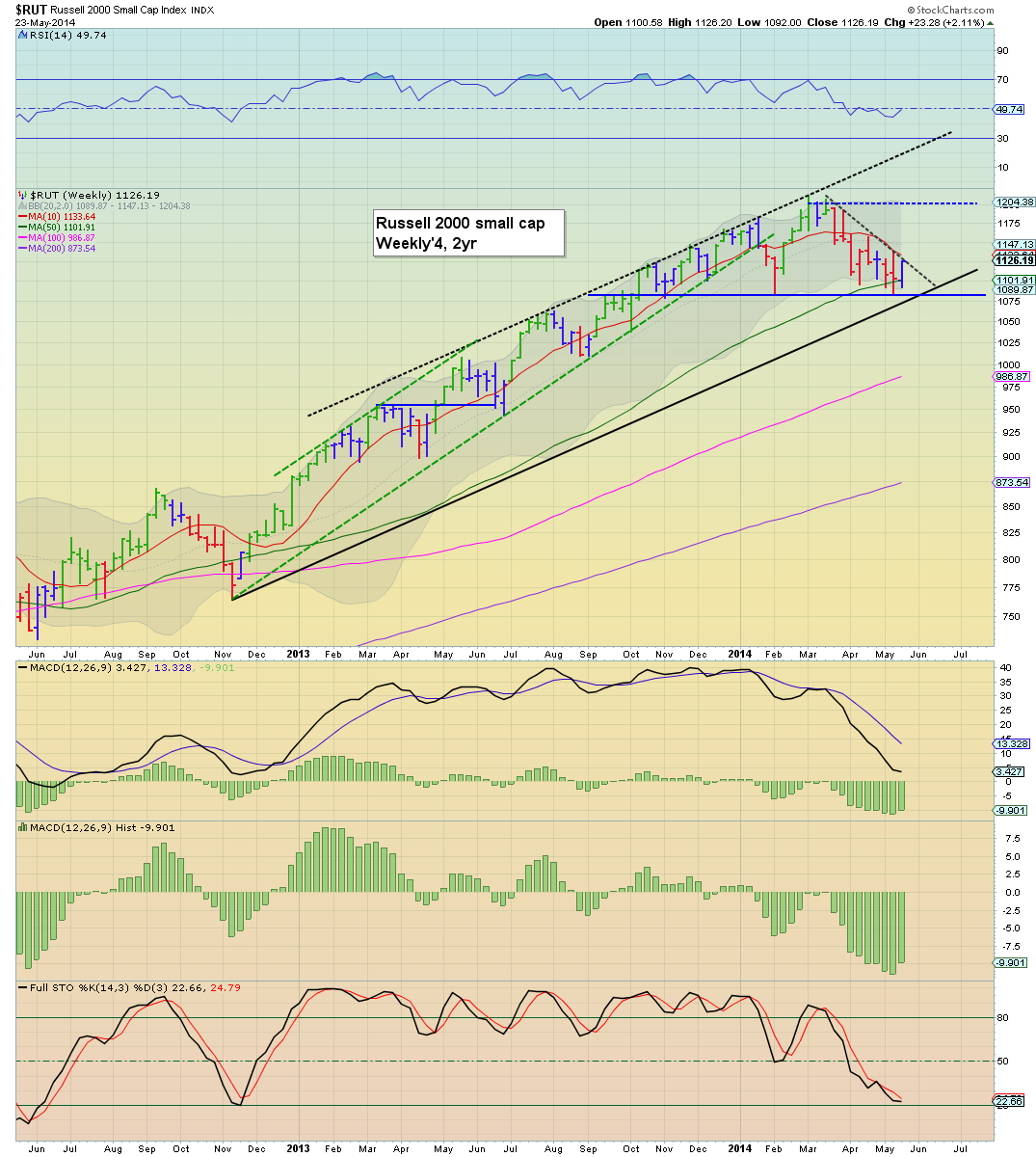 So...a sixth consecutive green candle on the weekly 'rainbow' chart for the sp'500. Unquestionably... the trend is outright bullish, with the upper bollinger offering the 1910/15 zone next week.

Even the battered R2K index is showing a turn - via a blue candle, with target upside to around 1170/80. The R2K is offering a possible giant H/S formation, although that scenario will get dropped on any move much above 1200, but that is still around 6% higher.

As many of you should know by now, I am a major follower of Martin Armstrong. His ECM model is something I am particularly interested in.

The point is, Mr A is seeking a 'phase transition' at some point, with the two following scenarios...

It is a somewhat complex issue to summarise, but broadly speaking - from the 'doomer bear' perspective, equity bears should actually be hoping for a hyper wave into late 2015/16....and then a grand collapse.
--

Well, it has been a tiring week...and its time for me to wrap up!

*the weekend post - late Saturday, will be on the US weekly indexes
Posted by Trading Sunset at 04:00:00
Email ThisBlogThis!Share to TwitterShare to FacebookShare to Pinterest 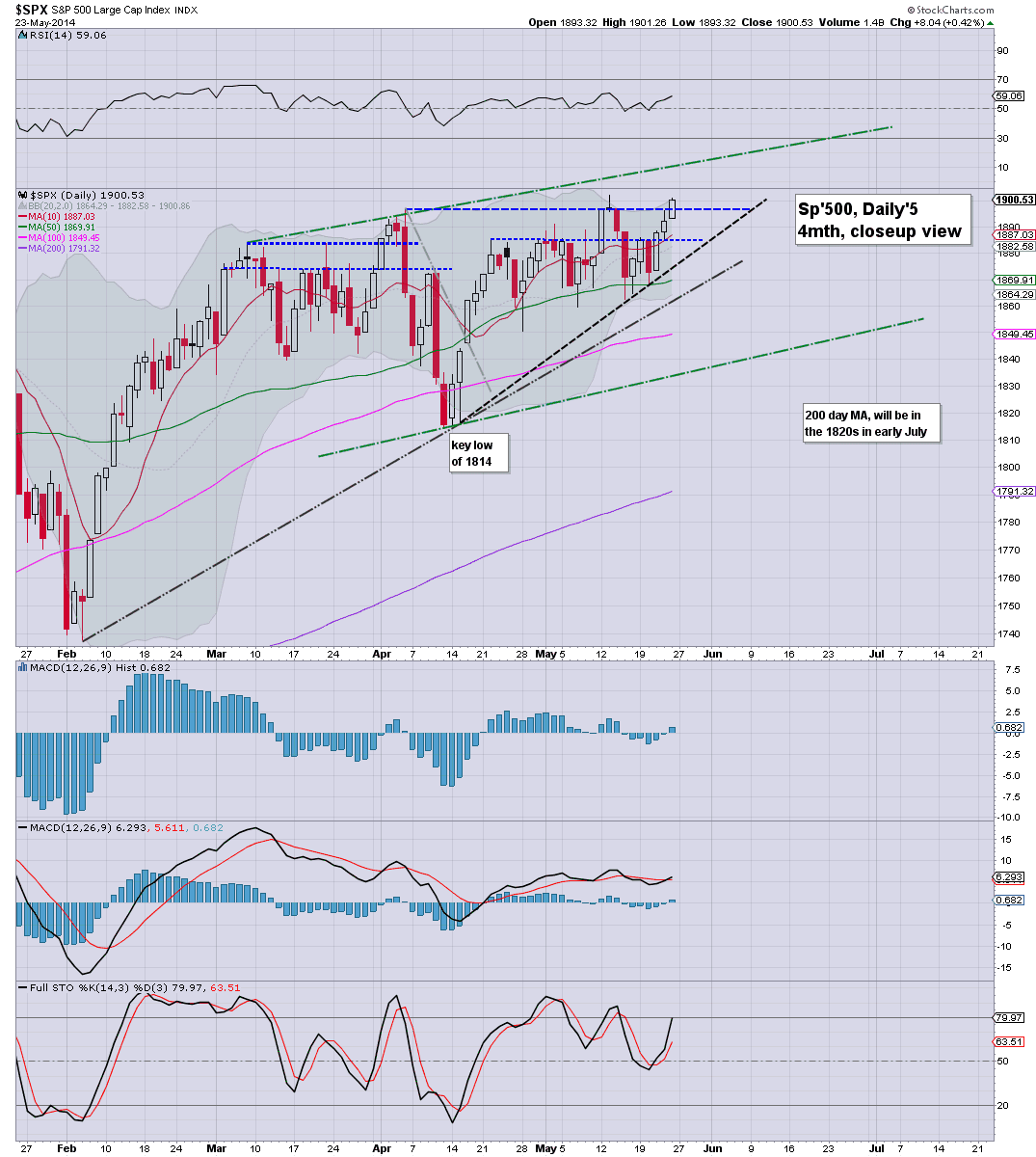 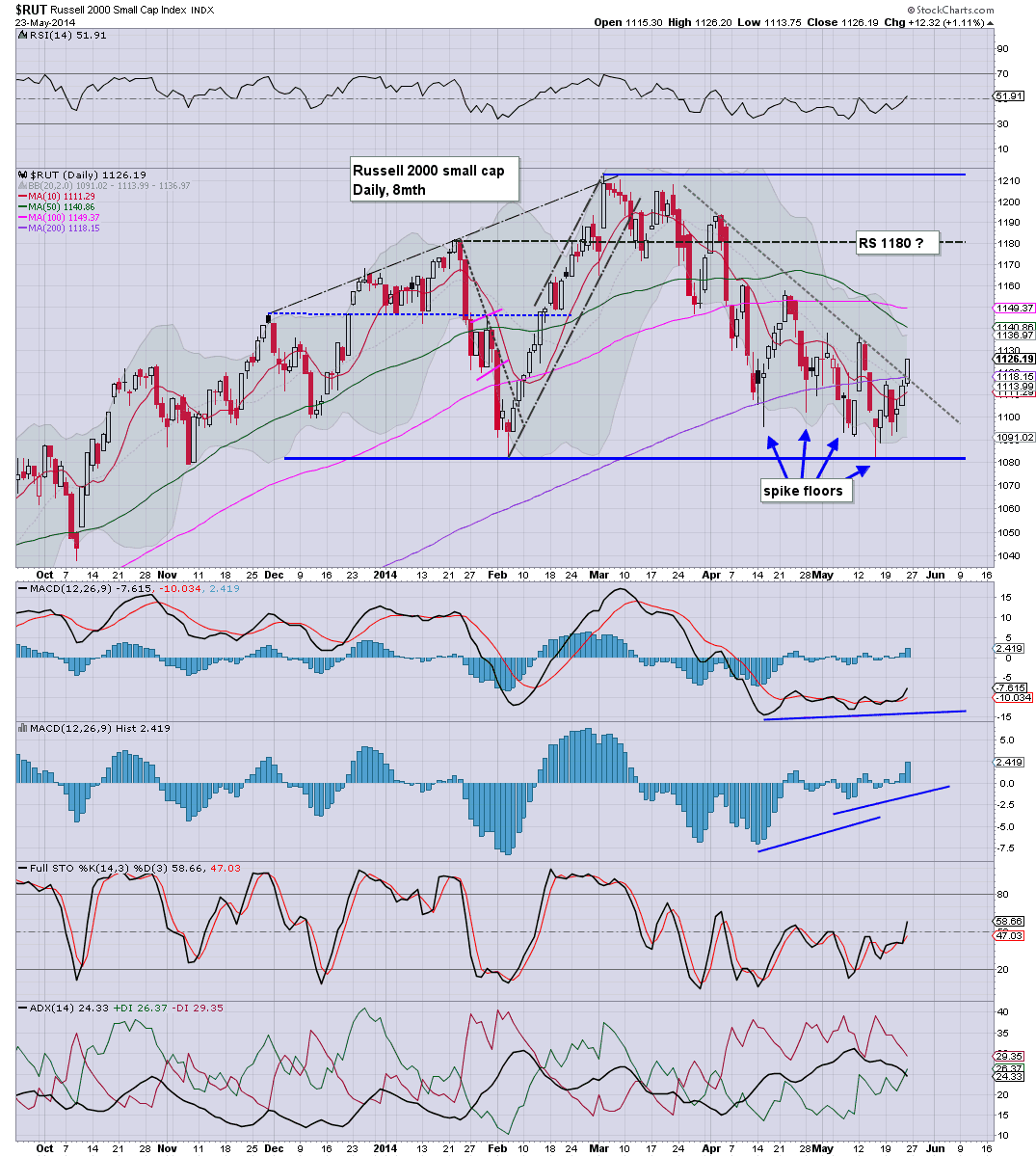 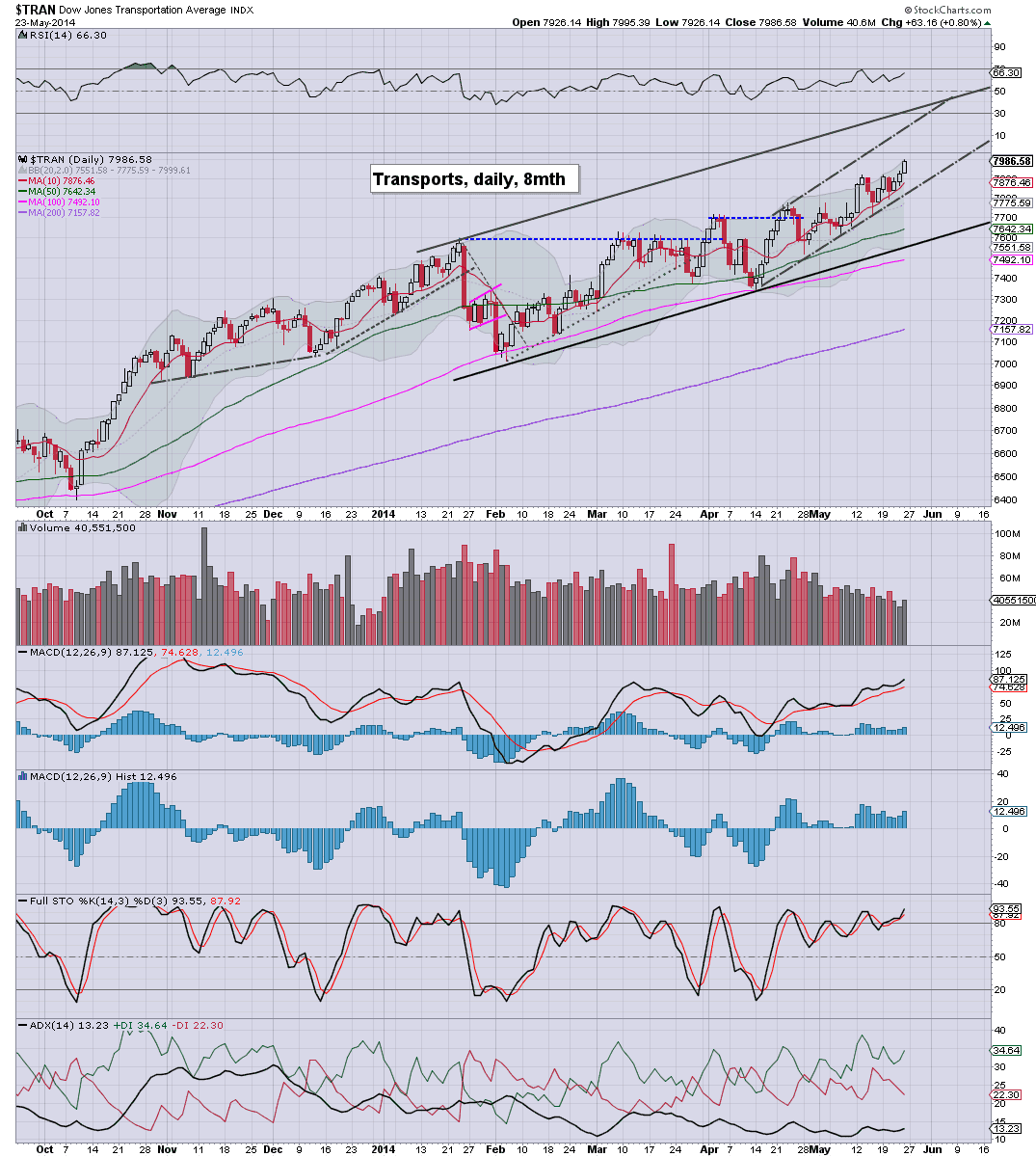 Most notable aspect of the day, a new historic high for the Transports, with the 8000s seemingly due early next week.

The Dow/SP, also both look set to break new highs next week, with key resistance in the 1910/15 zone, although the daily/hourly charts are offering the bears a small retracement next week..before renewed upside.