With equities closing significantly higher, the VIX continued to cool, settling -15.8% @ 30.32 (intra low 28.67). The near term outlook offers a multi-day equity bounce, and that will likely equate to VIX falling to the 22/19 zone. 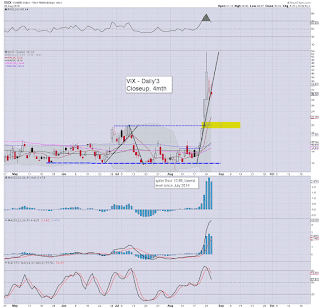 VIX looks set to cool into the low 20s, along with equities rallying for at least a few days.
-- 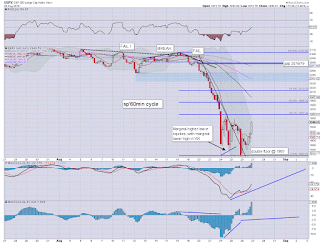 Suffice to say... net daily gains. The collapse wave from last Wednesday afternoon (2096), has concluded with a double floor of 1867.

Now that a floor appears secure... how high a bounce?

Where it gets tricky is whether the market can keep pushing into the next FOMC (Sept 17'th). If so.. then we could battle as high as the 2050/70 zone.

From there.. the bears should have a high chance at smashing the market lower into end Sept/early Oct.

Unlike yesterday's train wreck closing hour, US equities are set to close with significant gains. Equity bulls should be seeking a daily close above the hourly 10MA - currently @ 1905. The VIX looks vulnerable to losing the 30s. There is notable weakness in the metals, Gold -$12, with Silver -3.5% 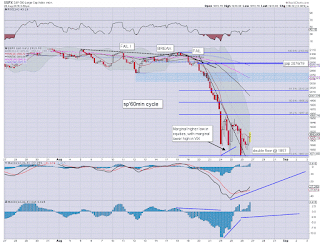 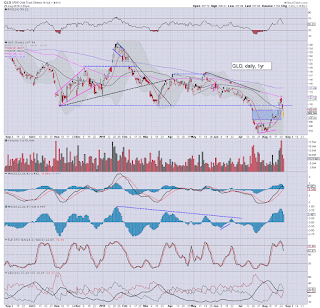 Well, its been a rather incredible six trading days.. but it seems fair to say we have a secure double floor of sp'1867.

The issue now is whether the rally will last just a few days... rolling lower into end month (Monday)... or can keep going all the way into the next FOMC (Sept 17'th).

Considering the price action of the past few years, an overly high and extended bounce/rally into mid Sept' looks viable.

Targets.. Primary sp'2000
Secondary.. 2050/70 zone.. where there are an absolute truck load of aspects of resistance.

On no reasonable outlook does sustained action >2080 look viable for some months.

--
*I will hold long-AAPL overnight... unless there is some bizarre spike higher in the closing hour to the $110s.
-

3.05pm... It is notable that the hourly upper bollinger has stopped falling, and is now around 1950s... that will be a valid target for tomorrow.
-

Mainstream starting to catch on.... we have a floor... we're headed higher.

This will make for one of the bigger net daily gains... EVER.

VIX set to lose the 30s.. into the close.
Posted by Trading Sunset at 19:52:00
Email ThisBlogThis!Share to TwitterShare to FacebookShare to Pinterest

US equities have seen further swings into the early afternoon, and it appears the market has secured a double floor of sp'1867. First upside is the rapidly declining hourly upper bollinger... currently @ 1965. VIX is confirming the equity floor.. -9% in the 32s. A daily close under the 30 threshold is viable. 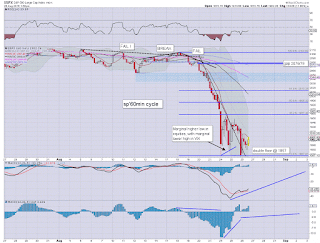 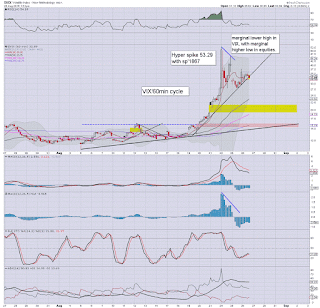 I would normally be very content to add to my existing position, however, as things are, I have little interest in committing any additional funds on the bullish side. I'll stick with what I have... and try to trade in/out of AAPL across the next week or two.

Indeed, I'm increasingly starting to wonder if the market will manage to broadly battle higher all the way into the next FOMC (Sept' 17th).

stay tuned.
Posted by Trading Sunset at 18:52:00
Email ThisBlogThis!Share to TwitterShare to FacebookShare to Pinterest

US equities have continued to slip.. if slowly, for another hour.. with a new intra low of sp'1881. The smaller 15min cycle is offering a bullish signal on a daily close above 1890. Equity bulls can't be confident until some sustained action above the hourly 10MA.. currently @ 1909. 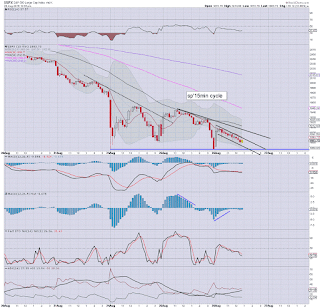 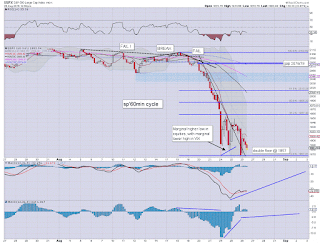 For now... there is little to add.. as the market continues to battle to hold the double floor.

Yet we're still due a sig' multi-day bounce.
--

US equities are still seeing some significant weakness as every micro rally is being sold into. Right now, equity bulls need a break above near term declining resistance, which as at 12pm is sp'1910... and which will be 1890 at the close. The hourly 10MA @ 1915.. is similarly a key target for the bulls to break/hold above. 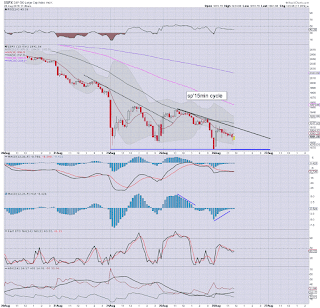 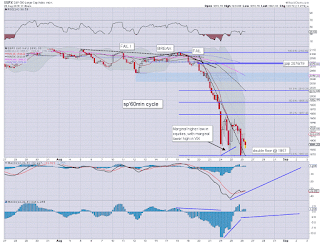 Without question... it remains a somewhat borderline situation, but unlike yesterday, I don't see an insane closing hour collapse wave.

The smaller 15min cycle is offering price structure of a narrowing bullish wedge.. with a viable break upward into the close.

The sun has finally come out in London city, after earlier floods blocked the freeway.

time for tea.
Posted by Trading Sunset at 16:50:00
Email ThisBlogThis!Share to TwitterShare to FacebookShare to Pinterest

11am update - the swings continue

The significant swings continue, with the market having cooled from an opening high of sp'1914 to 1889. Despite another wave of weakness, the market has an increasingly secure double floor of 1867. A break to the low 1800s looks very unlikely until the latter half of September. 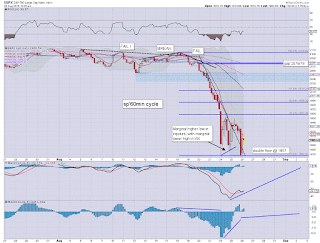 *Dudley has given the market a few things to consider, and it leans on the 'no rate hikes this September' side of the fence.
--

Well... we still have a long afternoon ahead... one which will seemingly see a break to the upside (above resistance of the hourly 10MA).. or renewed weakness.

--
I've eyes on AAPL... naturally... although with the morning weakness, an exit in the 110s looks out of range today. 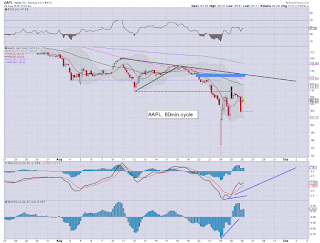 --
time for lunch, back soon..
Posted by Trading Sunset at 15:53:00
Email ThisBlogThis!Share to TwitterShare to FacebookShare to Pinterest

US equities open significantly higher, with an early high of sp'1914. Equity bulls should be battling for a break above the 3pm candle high... with a daily close in the 1930s. That will not be easy though, as trading conditions remains very unstable... with some traders clearly selling into every up wave. 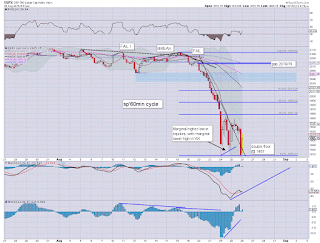 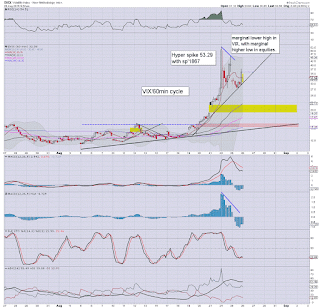 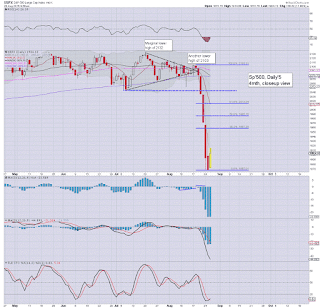 Note the MACD (blue bar histogram) cycle.. its levelling out.... with a lot of potencial upside in the days ahead.

However, even if go STRAIGHT UP from here... there will be no bullish cross for at least another 5-7 trading days.
- 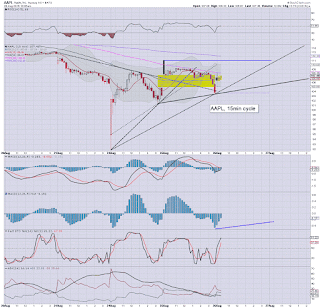 Thats a valid target in the immediate term... would make for a reasonable exit.
- 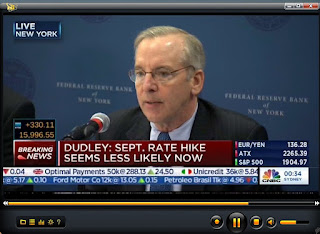 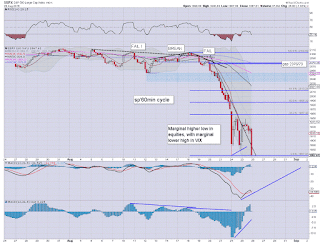 Here we go again, with another opening powerful rally attempt. Will this one hold? I am guessing... YES.
--

We have a clear double floor on the sp'500.. with other indexes putting in marginally higher lows.

If we do close significantly net higher today.. it should solidify a short term floor.. and clarify we'll be battling upward into end month.

As it is... we'll probably see continued (if lessening) intraday swings... on the way up.

Ironically, I think Oscar is now overly bearish... at least in the short term.
--

I continue to think Sinclair - with the other 'gold promoters' remain in complete denial. They have been calling for upside for four solid years. Now they think Gold has floored at $1071. Err.. no. Gold looks headed for $1000, if not the $900/875 zone... as USD still looks on track for breaking above DXY 100 in the coming months.
--

*lets not forget, we have Durable Goods orders (8.30am)... and Fed official Dudley is speaking this morning. Mr Market will be listening!

First key target is the Monday high of 1948.. but hell.. even I don't think that is possible today!

Anyone think yesterday's high could be broken above on a hyper short-stop cascade?

Yeah... sure it doesn't.. having actually fallen below key support last week.

Hell, maybe its time for another Tim Cook letter?
-

VIX -9%... sub 30 would be a bullish equity sign this morning
Posted by Trading Sunset at 12:16:00
Email ThisBlogThis!Share to TwitterShare to FacebookShare to Pinterest

It was another wild and crazy day in the US equity market, with the sp'500 opening powerfully higher to an afternoon high of 1948, only to then see a severe collapse into the close. Despite the net daily declines, a bounce is still due, but from a double low of 1867... or 1820s? 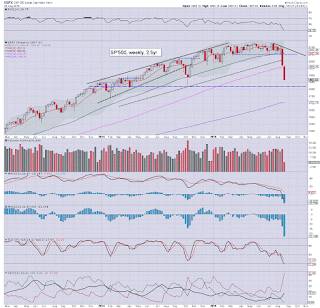 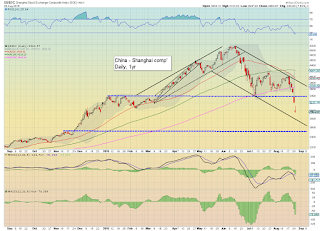 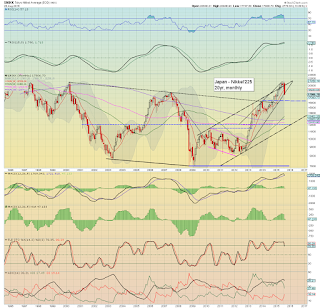 re: US market - today's closing hour was unquestionably a total FAIL for the bull maniacs. The daily close is offering a 'hope' of a double floor of sp'1867, but it won't take more than a slight nudge under to spiral things lower across Wed' morning.

However, regardless of another day or two downside... we're due a major bounce.. one that - unlike today, will be sustained for some days.. perhaps even a few weeks... into the next FOMC of Sept'17th.

With the loss of the 3000 threshold, further core technical damage has been done. Yes, the PBOC have acted, and that will surely kick the China/Asian markets higher for at least some days, but broadly... the Shanghai comp' looks set for downside to around 2500.


re: Japan. The monthly candle is looking real ugly... and there is viable downside to 16500 in the immediate term. However, with the PBOC taking action, perhaps it will be enough to halt the current decline.. and bounce into September.
--

For those with an hour to spare... worth some consideration
---

The only data of note is Durable Goods Orders.

*Fed official Dudley is speaking on the regional economy in the morning... maybe a few comments on int' rates might appear.

Eyes on the futures

With the closing hour train wreck, the US market is now sitting on the edge of another cliff. Of course, the PBOC have now taken action, and if China.. along with other Asia markets can rally overnight.. then there is high risk to the bears that US equities will resume higher tomorrow.. and sustainability so.

My best guess.. .we push back upward. However, my 3pm post was titled 'upside into the close'... so maybe you can dismiss my best guess for tomorrow.

*thanks for the emails/messages today... always good to hear from you. 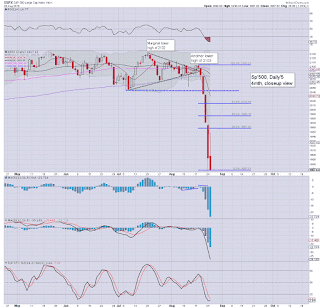 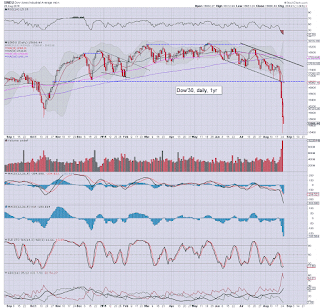 With the closing hour an unquestionable train wreck, the door is now open to another day or so of downside.. at least to the Oct' low of sp'1820.

From a pure cyclical perspective, the daily MACD cycle is on the extremely low end.. and there is the constant threat of a sustained and powerful rally.... one that (unlike today).. will hold.