Most world equity markets saw important follow through from the latter half October recovery. Net monthly changes ranged from +10.8% (China), +2.5% (USA - Dow), to -10.2% (Russia). With low interest rates and continued QE, further gains are expected across most.. if not all of 2015. 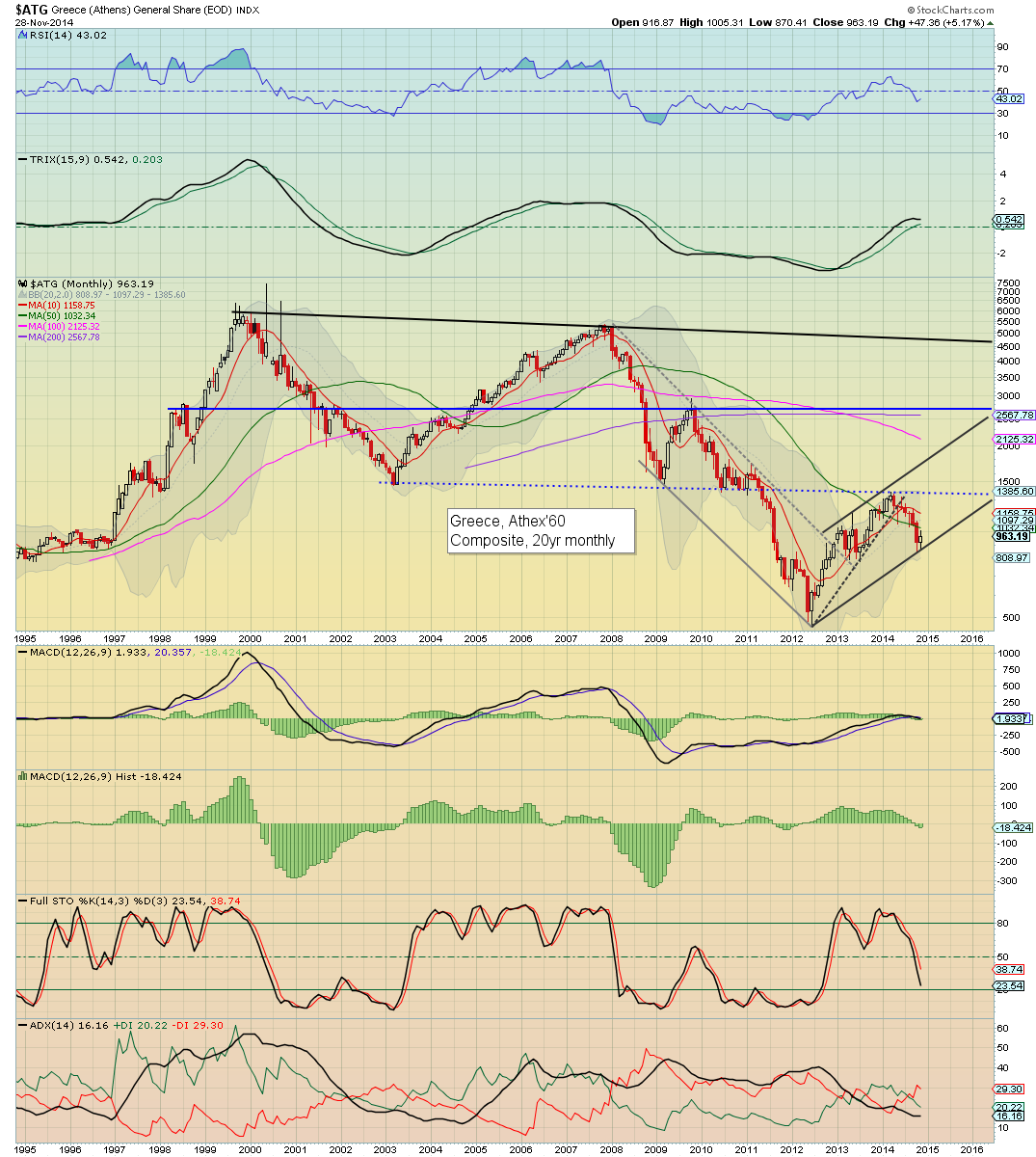 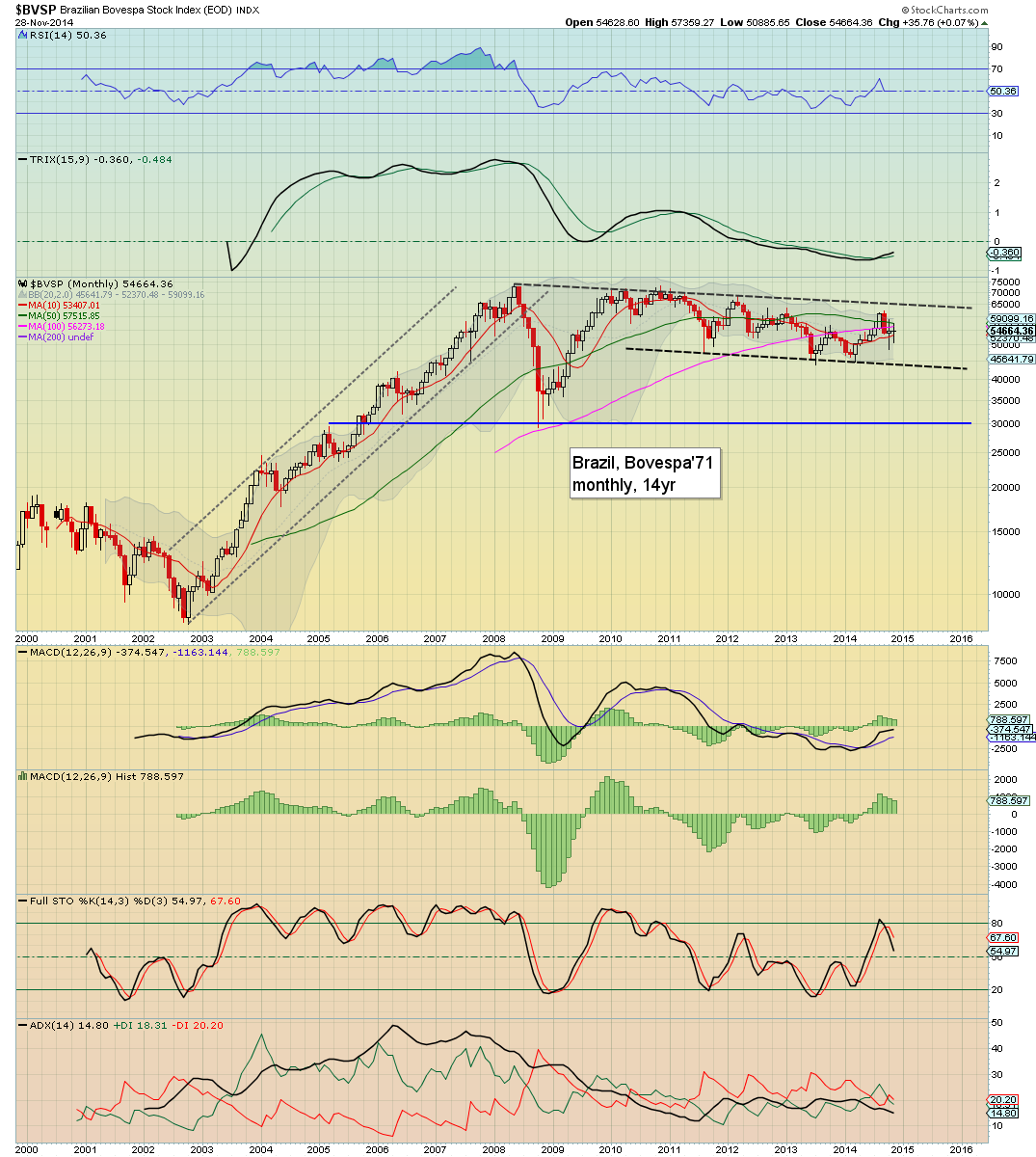 The Bovespa only managed a fractional gain for November. This is not surprising though, with Brazil especially vulnerable to the ongoing weakness in many commodities. 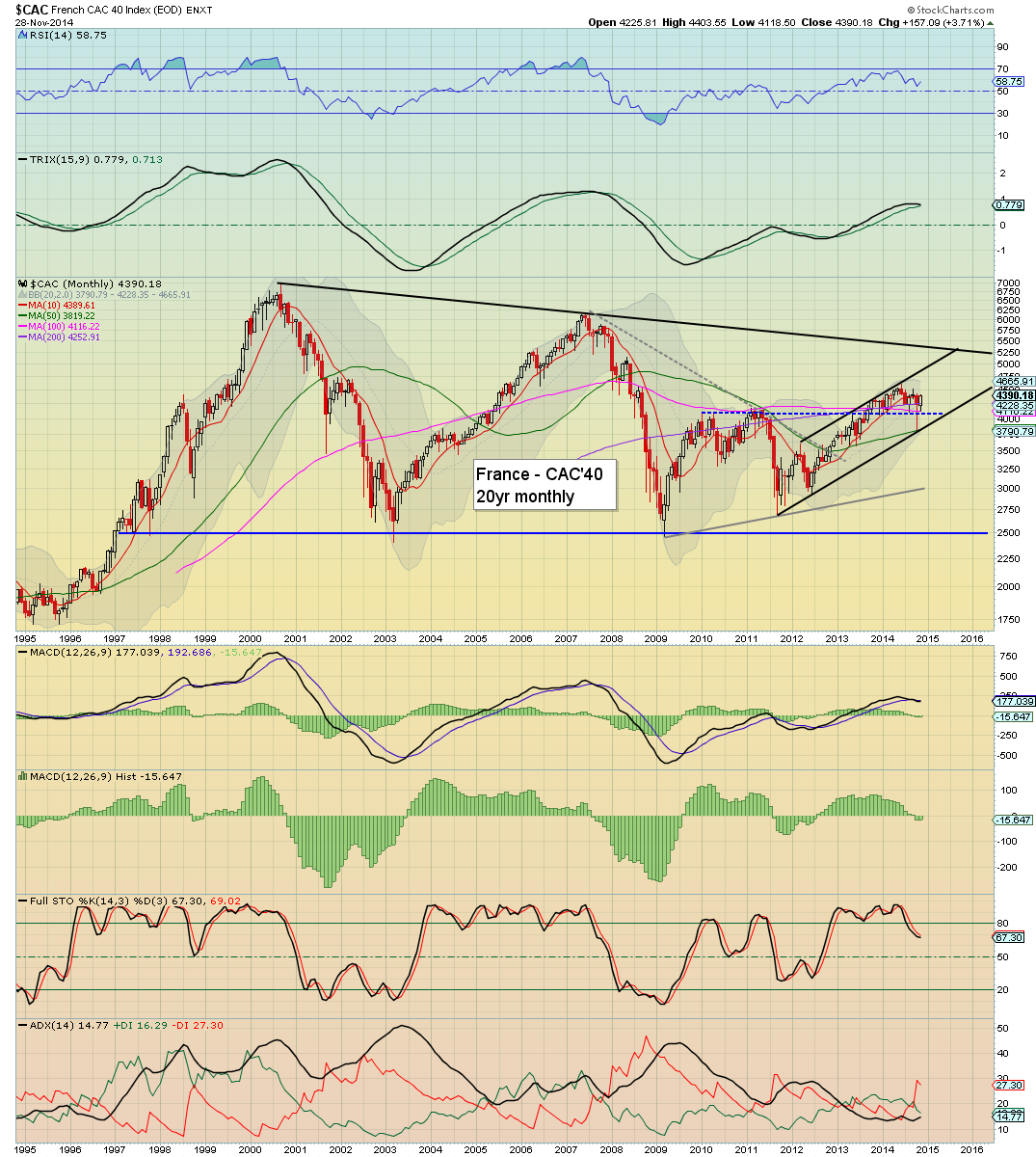 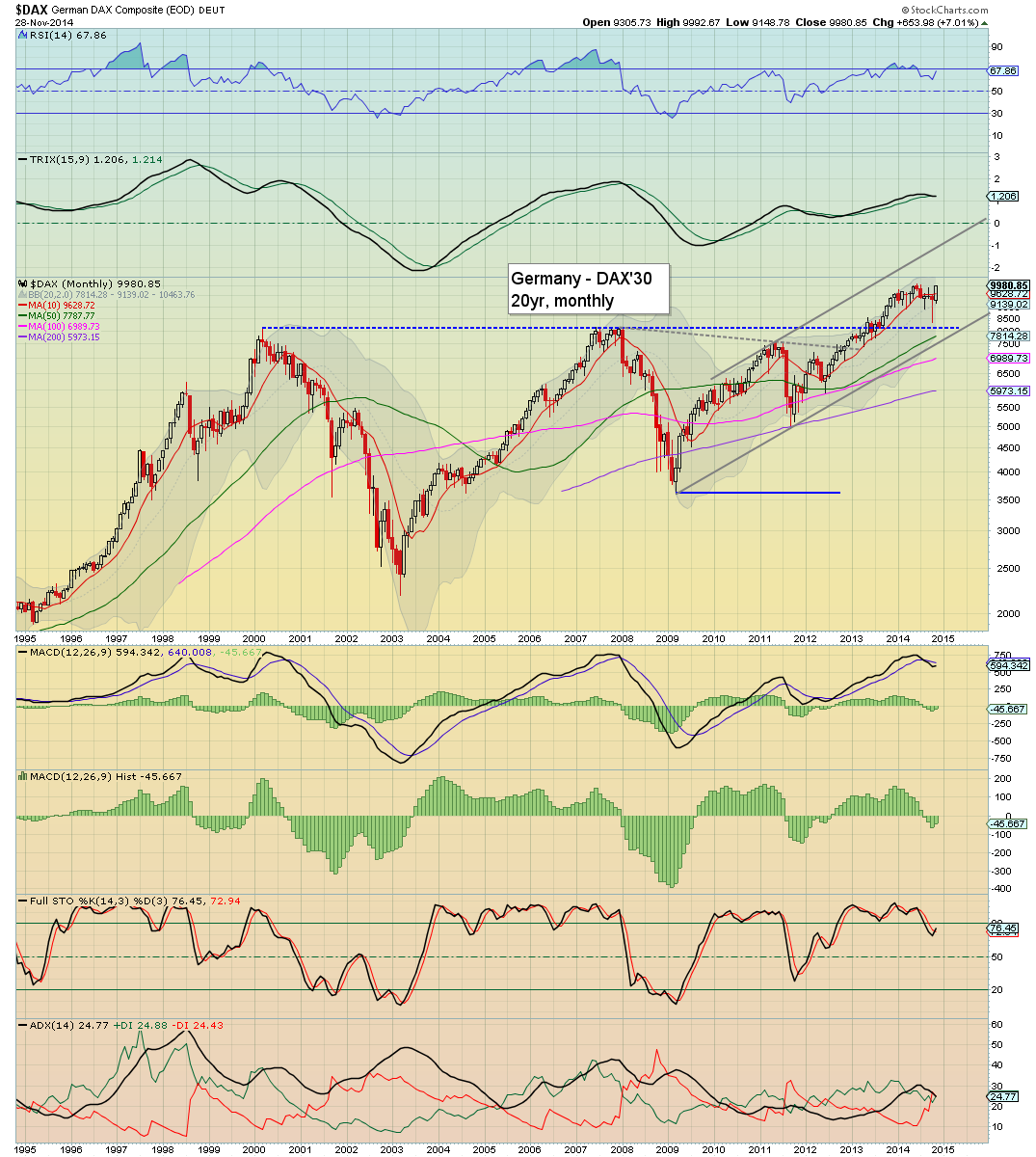 The economic powerhouse of the EU - Germany, managed an exceptionally strong gain of 7%. The DAX looks set to re-take the 10000s in December. There is viable upside to 13k by end 2015... and that only assumes continuation of the trend. 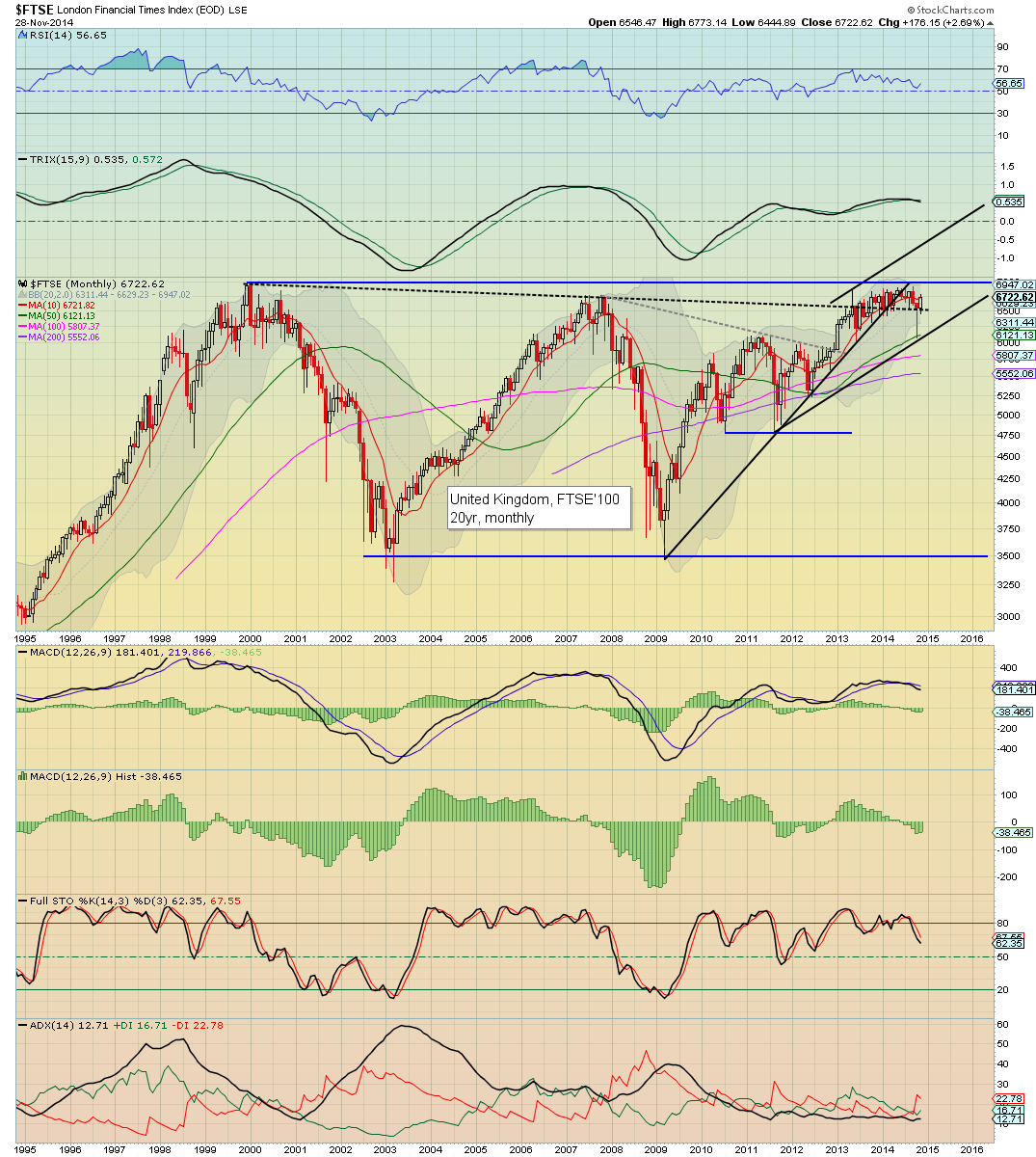 An important monthly gain of 2.7% for the UK market, but remaining stuck under the giant threshold of 7000. On a break >7k, those equity bulls seeking major upside across 2015 should be seeking 8500/9k. 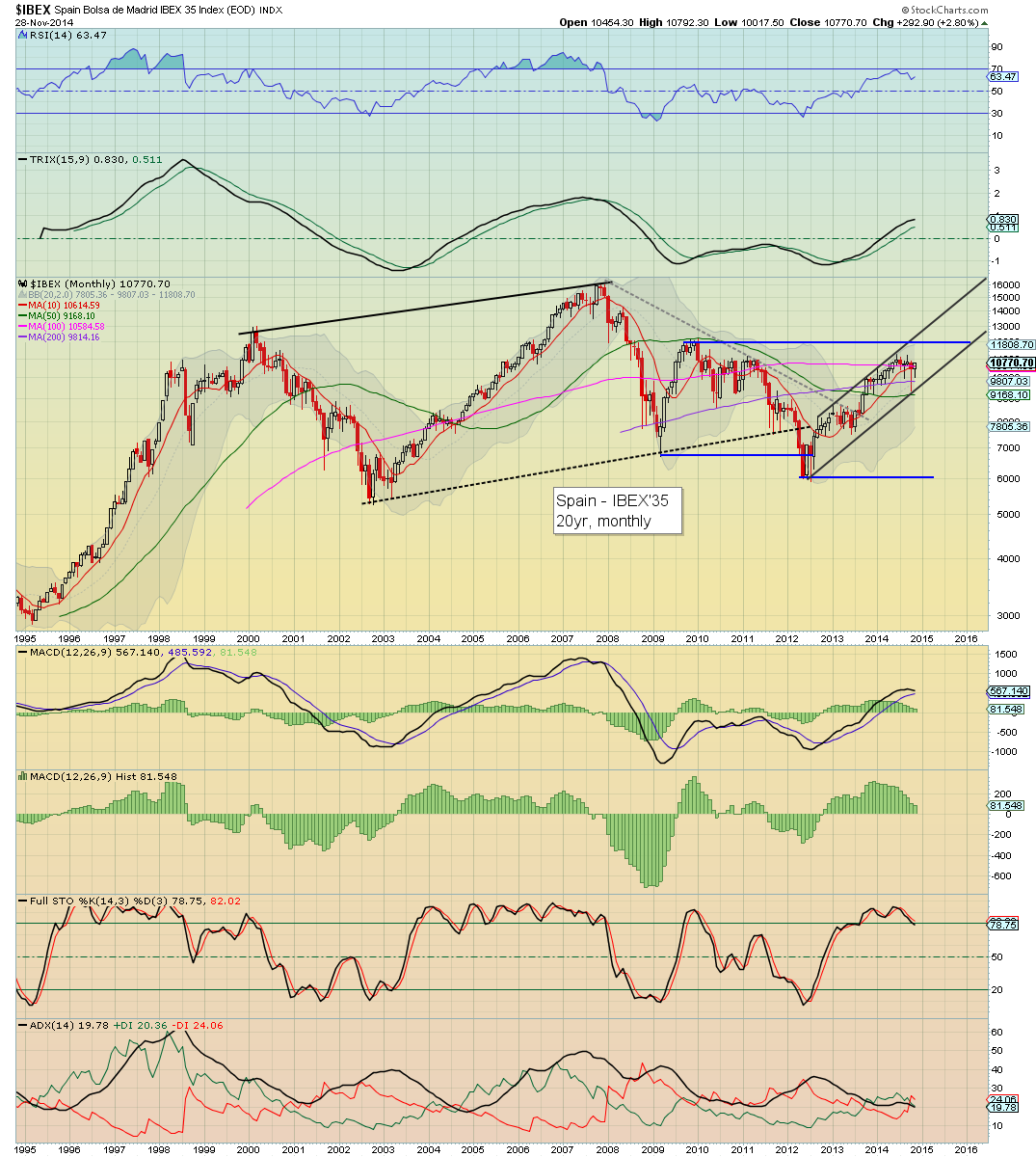 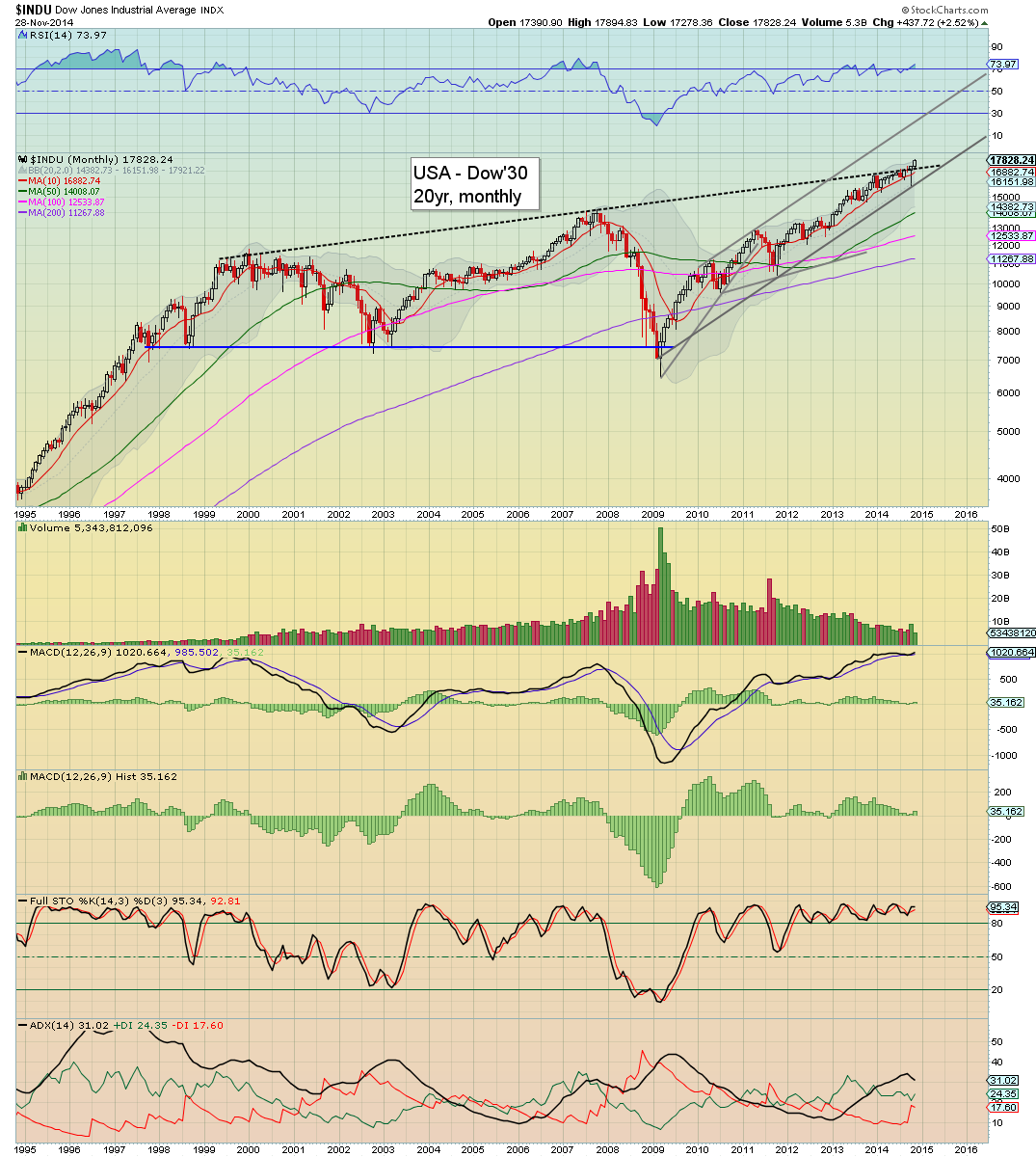 A net monthly gain of 2.5% for the Dow, and on any basis, we're breaking 'up and away'. Many have been touting some kind of narrowing wedge, but really.. that bearish scenario is surely to be dismissed. The November gains are more than enough to clarify that the Dow - along with other US indexes, are set for much higher levels.

There is viable near term upside to the Dow 18000/200 zone. The giant 20k threshold looks out of range until the late spring.

A break back below 17k looks extremely unlikely, and unless that level is taken out... I'll continue to hold to a 'no index shorts/VIX longs' trading policy. 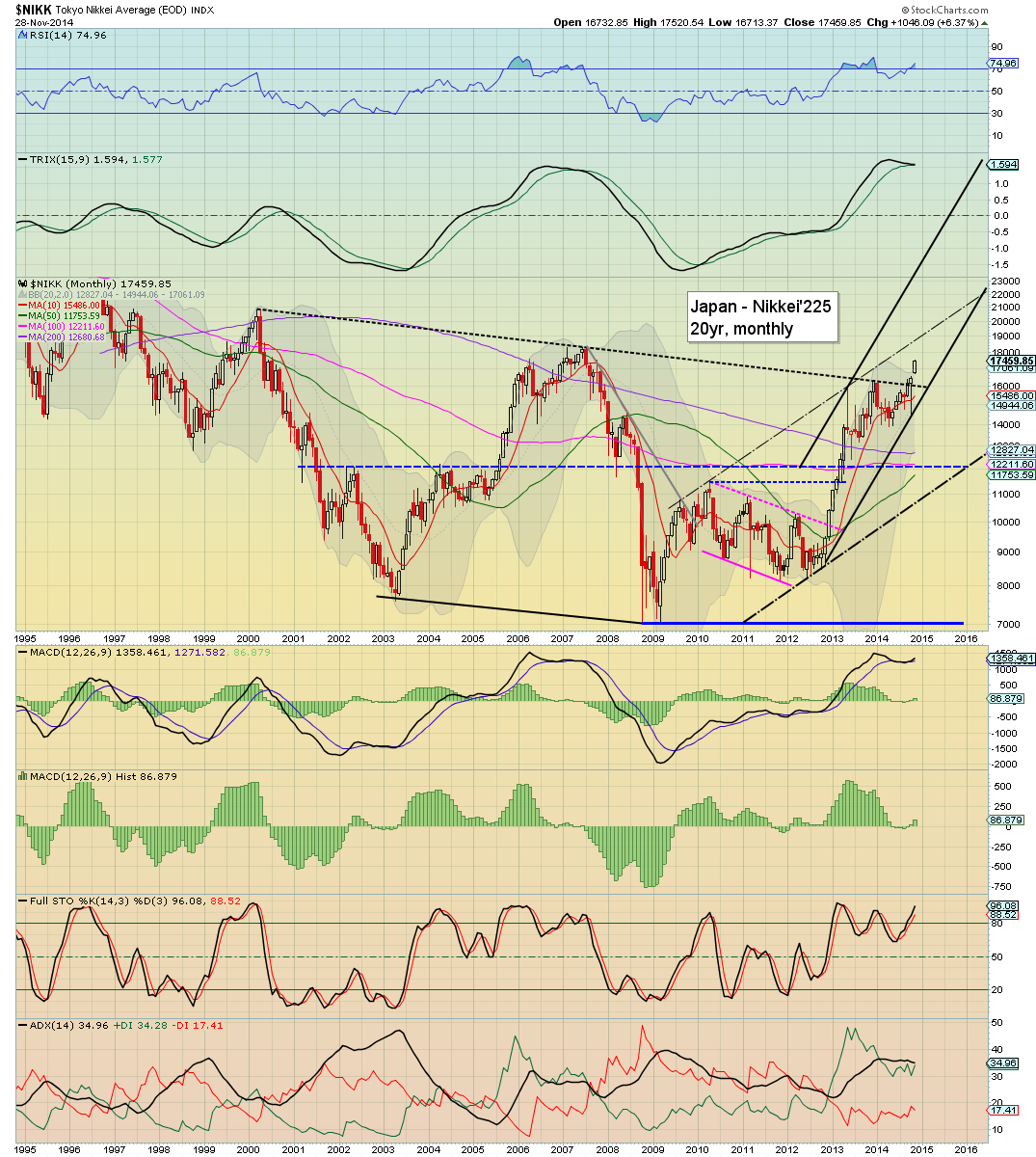 A powerful net monthly gain of 6.4% for the 'BoJ fuelled' Nikkei. The giant 20k threshold looks viable by next spring (along with Dow 20k). It will be interesting to see how the mainstream react when 20k is reached. How long until people start talking about a return to the highs from Dec 1989 (38957) ?

There can be ZERO doubt that the BoJ will keep on buying stocks, bonds, and just about everything else. Further, the BoJ will surely increase the rate of buying next year. After all, what else would they do? The BoJ are on a buying spree.. via 'new money' before the Yen (along with the bond market) implodes. 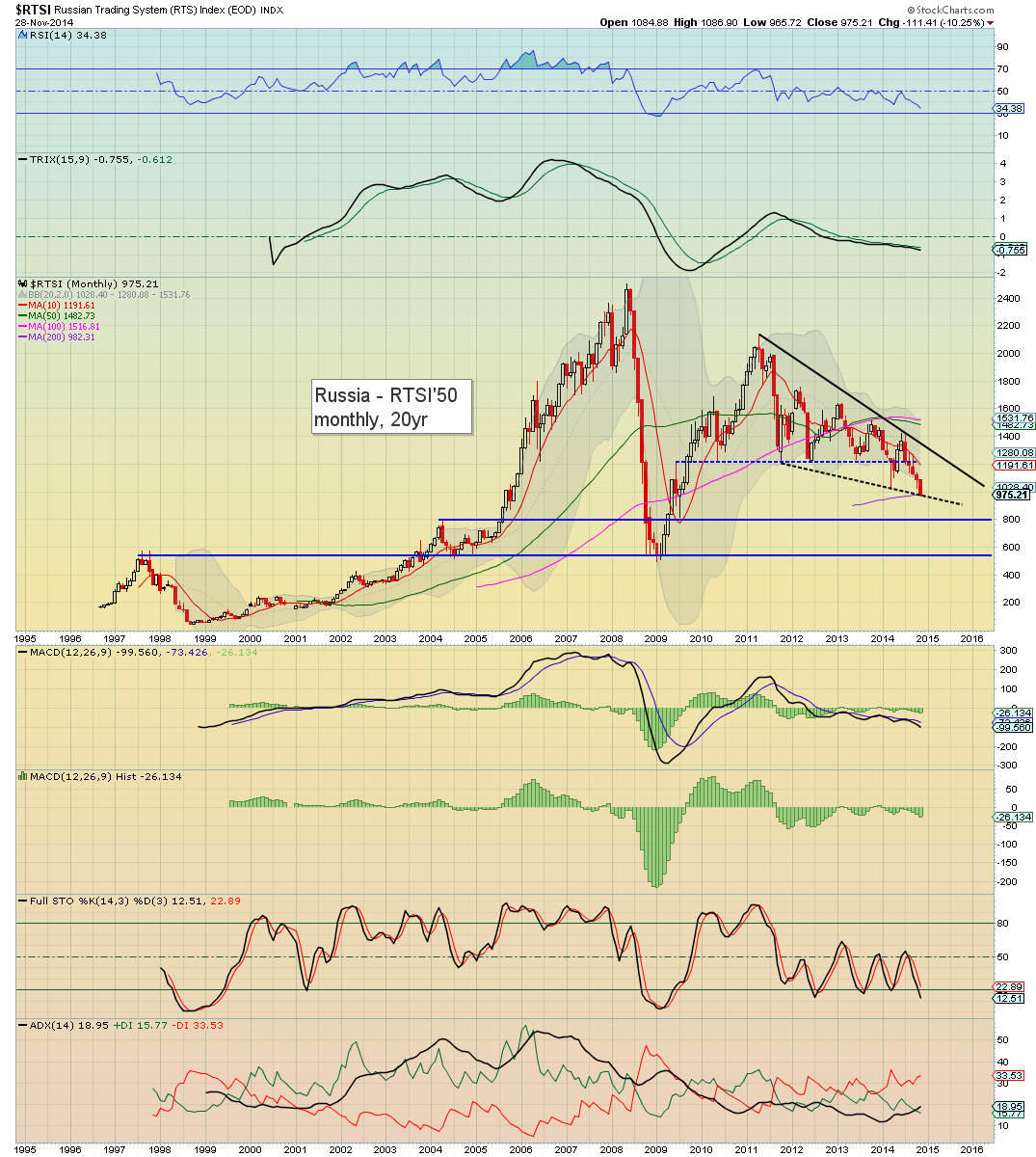 With Oil/gas prices under severe downward pressure, the Russian equity market continues to slide. The net monthly decline of -10.2% offers no sign of a floor in the near term. With the break under the 1000 threshold, next key support are the low 800s... another 20% lower.

Perhaps President Putin needs to start printing via the BoR? That will solve ALL the problems.. yes? 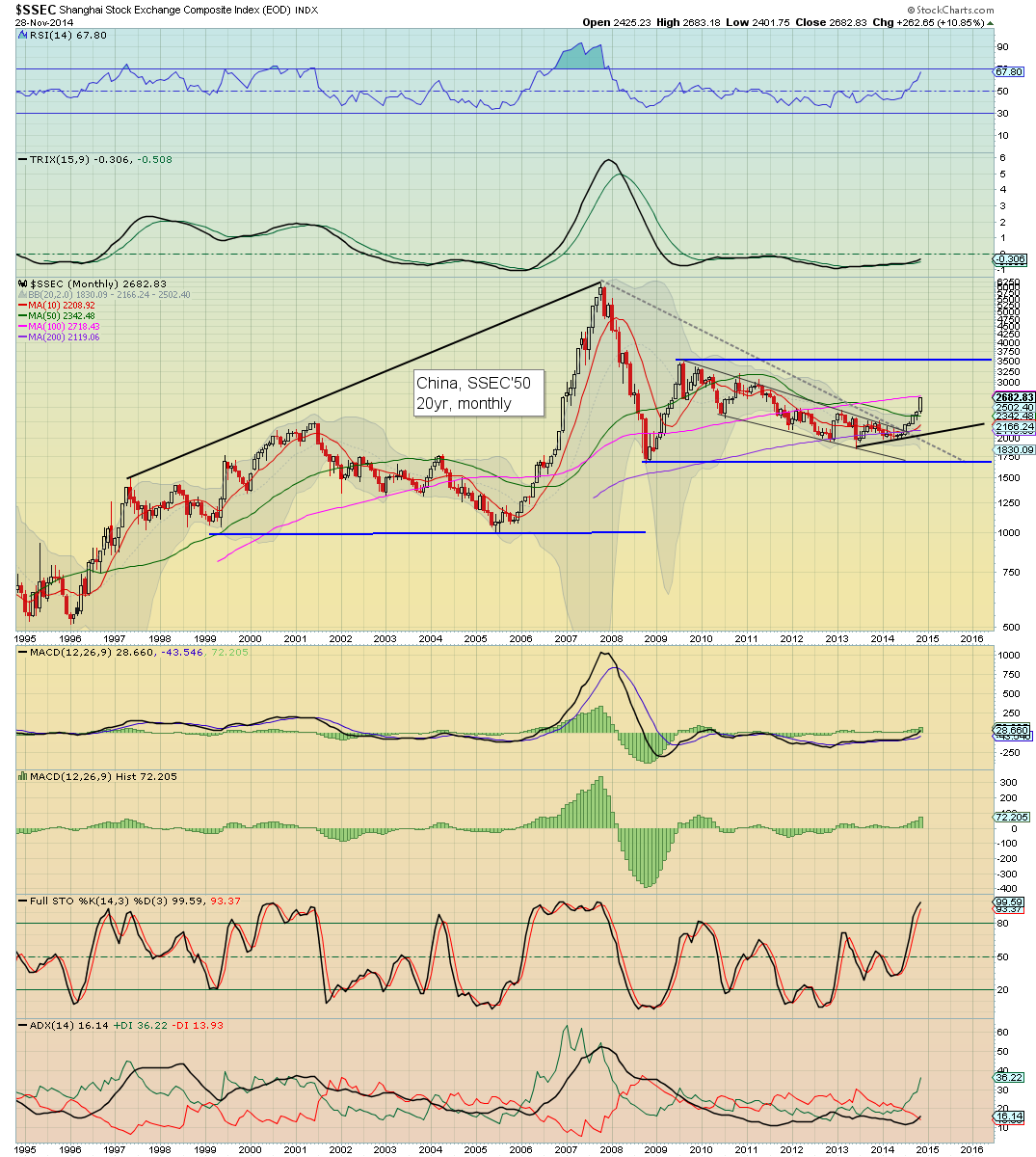 Without question, the broader world equity market has seen some very important follow through to the upside. The spike-floor monthly candles have been confirmed, and we have a solid month of gains.

The only anomaly is Russia... but then, that is almost entirely due to the ongoing collapse in Oil prices.

Taken as a collective... there looks to be a good 30-50% upside for most world markets across 2015. The only thing that could derail such hyper gains would be a major geo-political event. Considering the many 'scares' of the past few years - none of which turned serious, there is little reason to believe next year will be any different.

A fair number of bits and pieces in the coming week...

*there is a light sprinkling of Fed officials across the week... as ever, Mr Market will be listening, not least for any talk on interest rates.
--

Video update from... some guy with a weird accent


ps. posting this first audio update was only marginally less disturbing than going long the market
Posted by Trading Sunset at 17:00:00
Email ThisBlogThis!Share to TwitterShare to FacebookShare to Pinterest

Despite being just a half day, it was one of the most interesting trading days of the year. With Oil in collapse mode, the energy sector stocks were similarly getting destroyed. Outlook into year end offers little hope that a key floor is near. 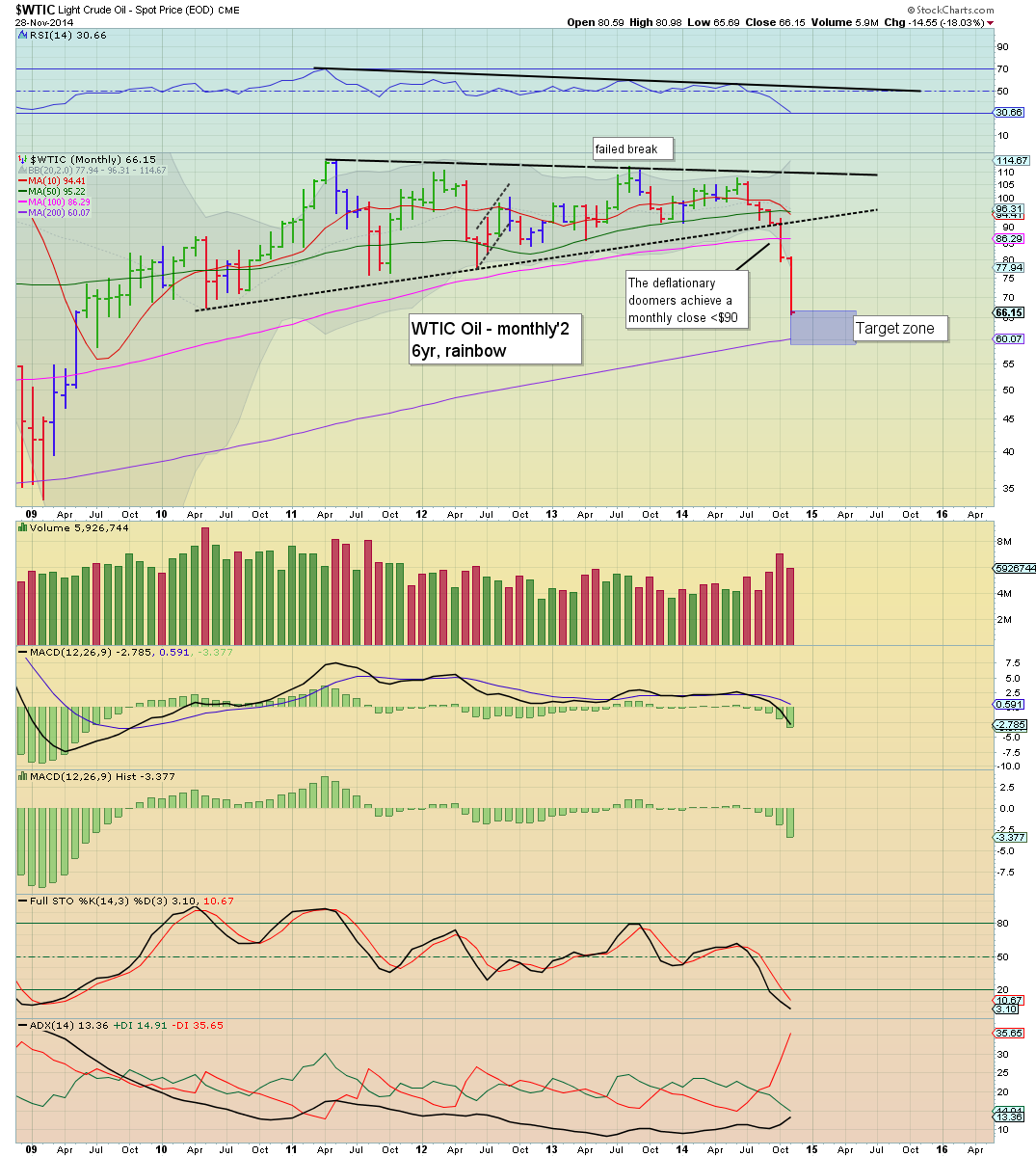 With the break of WTIC Oil $90 support in early October, the 65/60 zone seemed the obvious target.. and to my own surprise.. we're already about there.. with still one month left of the year!

So long as Oil remains weak... energy stocks are naturally going to remain under severe pressure. Q4 Earnings (due Jan'2015) are going to make for real interesting reading!

-
*normally, I would cover individual stocks on my 'fair value' page, but.... on this occasion... lets take a look at four particularly notable ones... 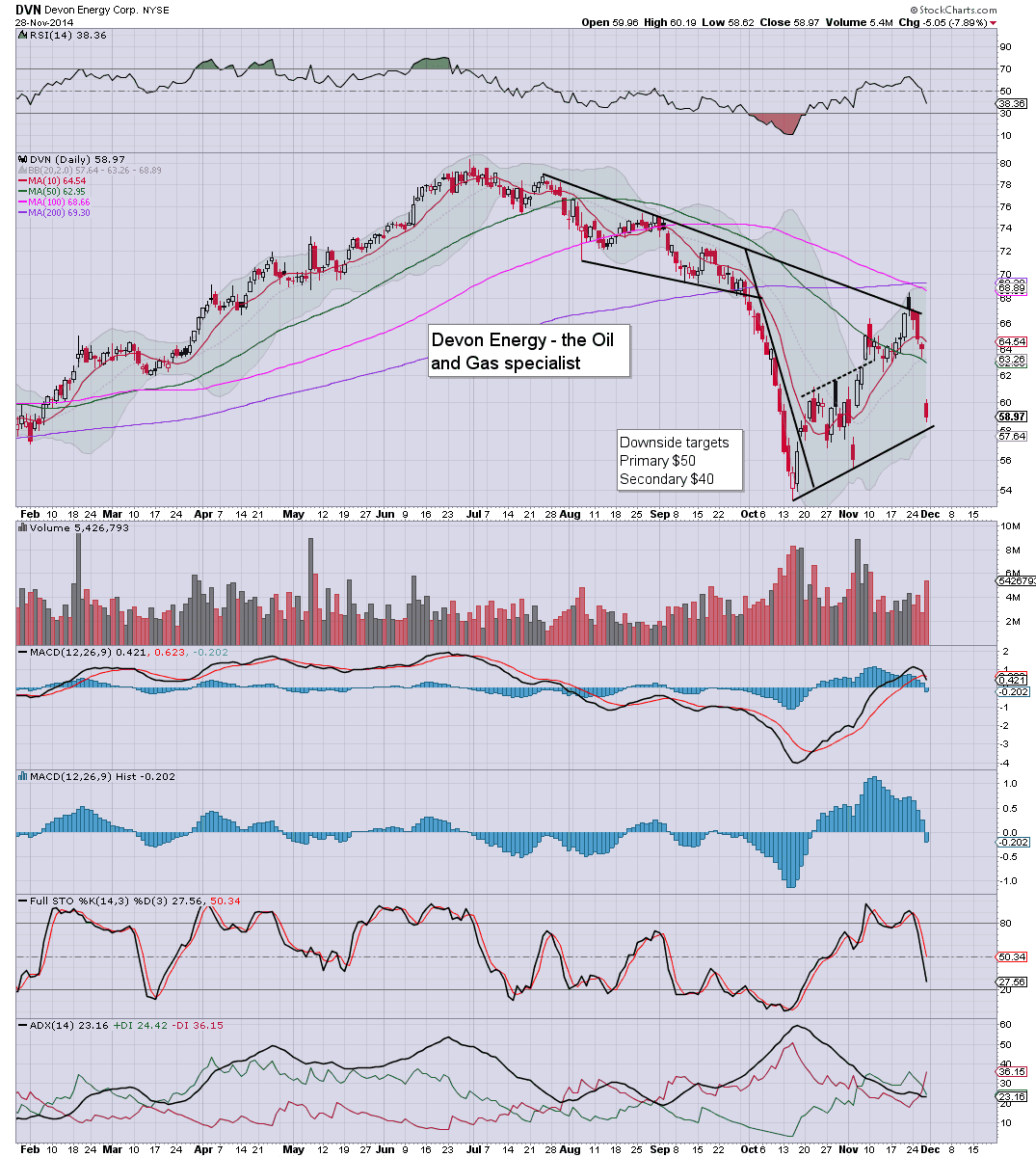 Massive break... with a black-fail candle just recently. Key downside is $40.. but that is going to take some months. 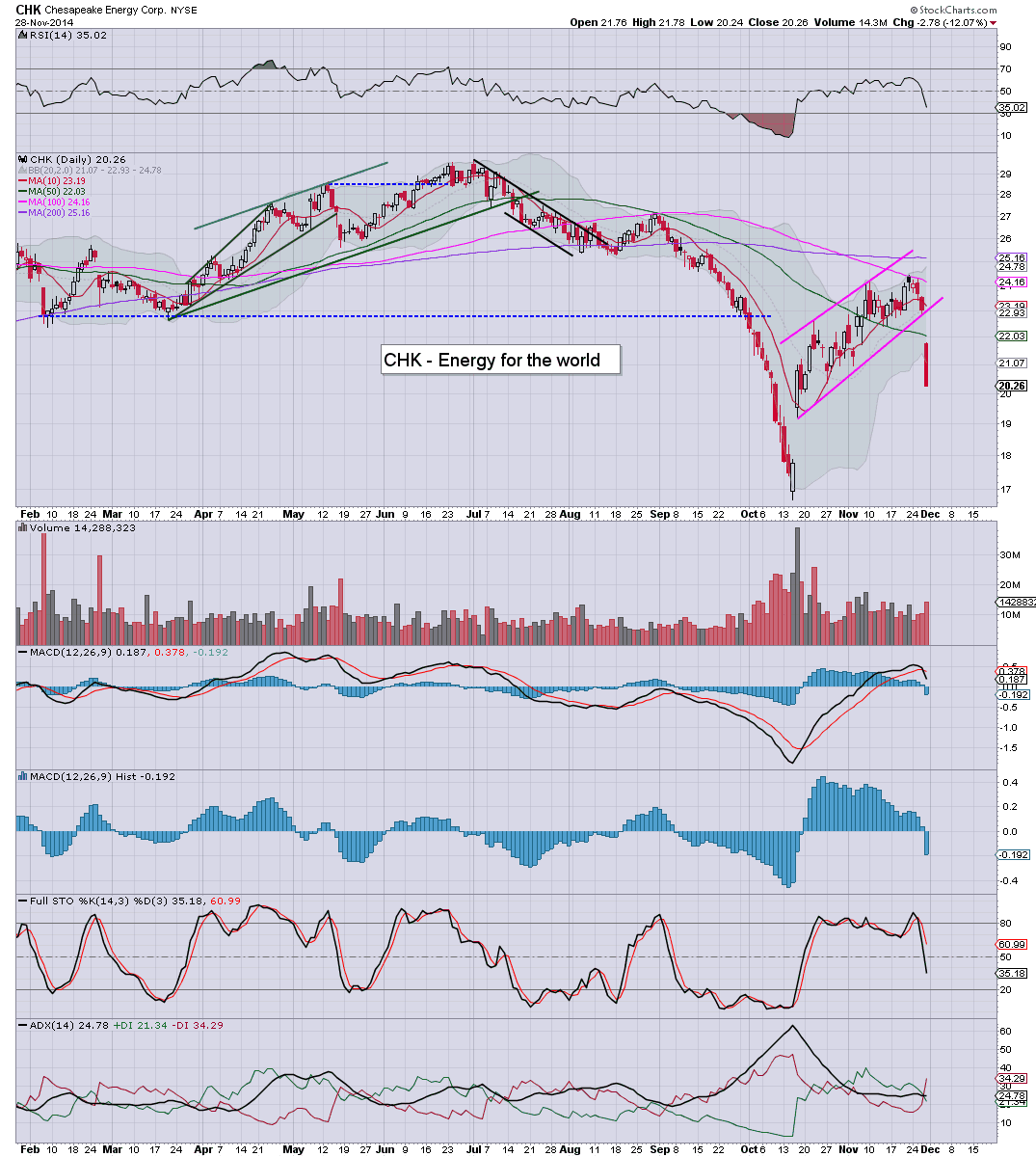 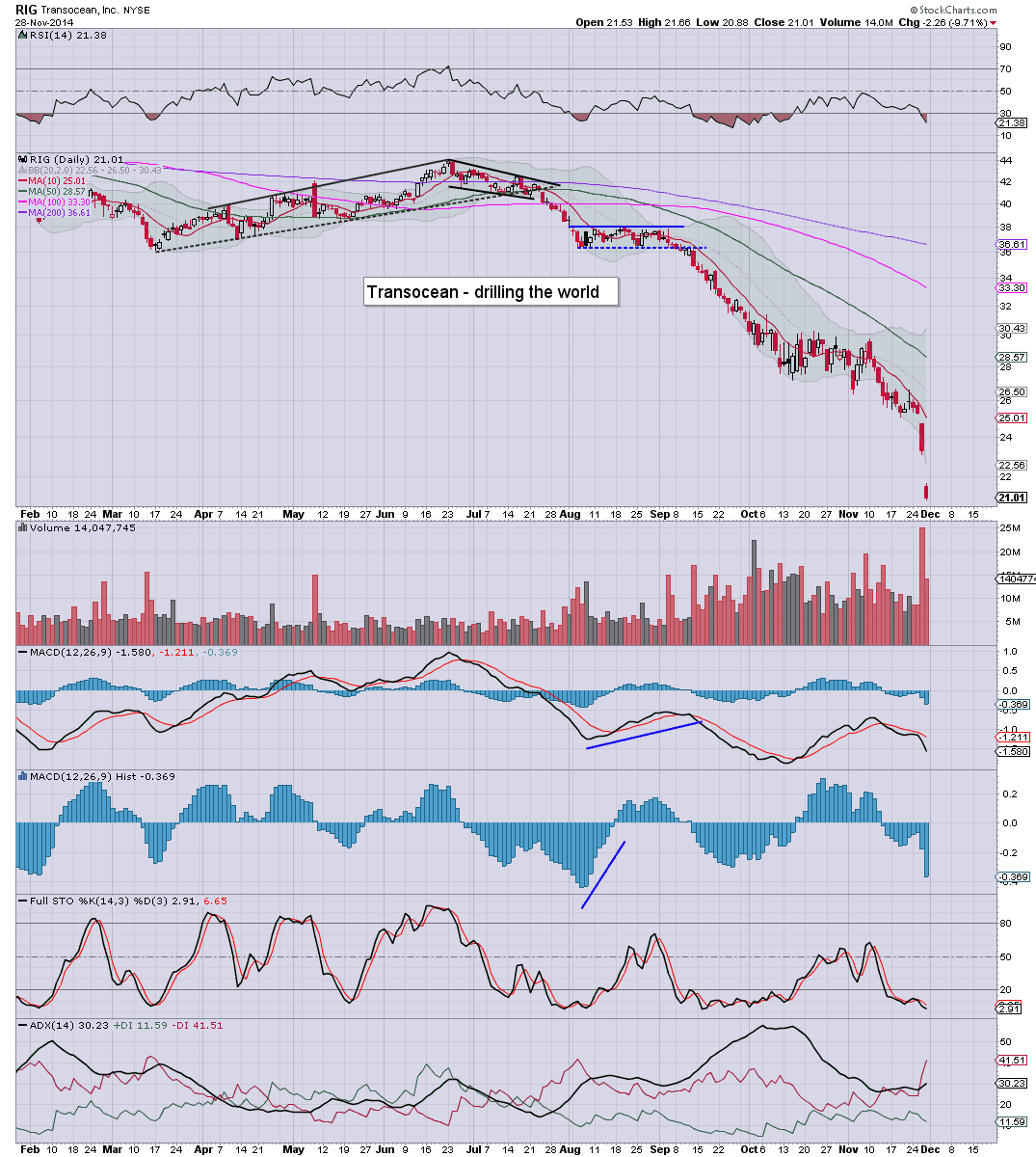 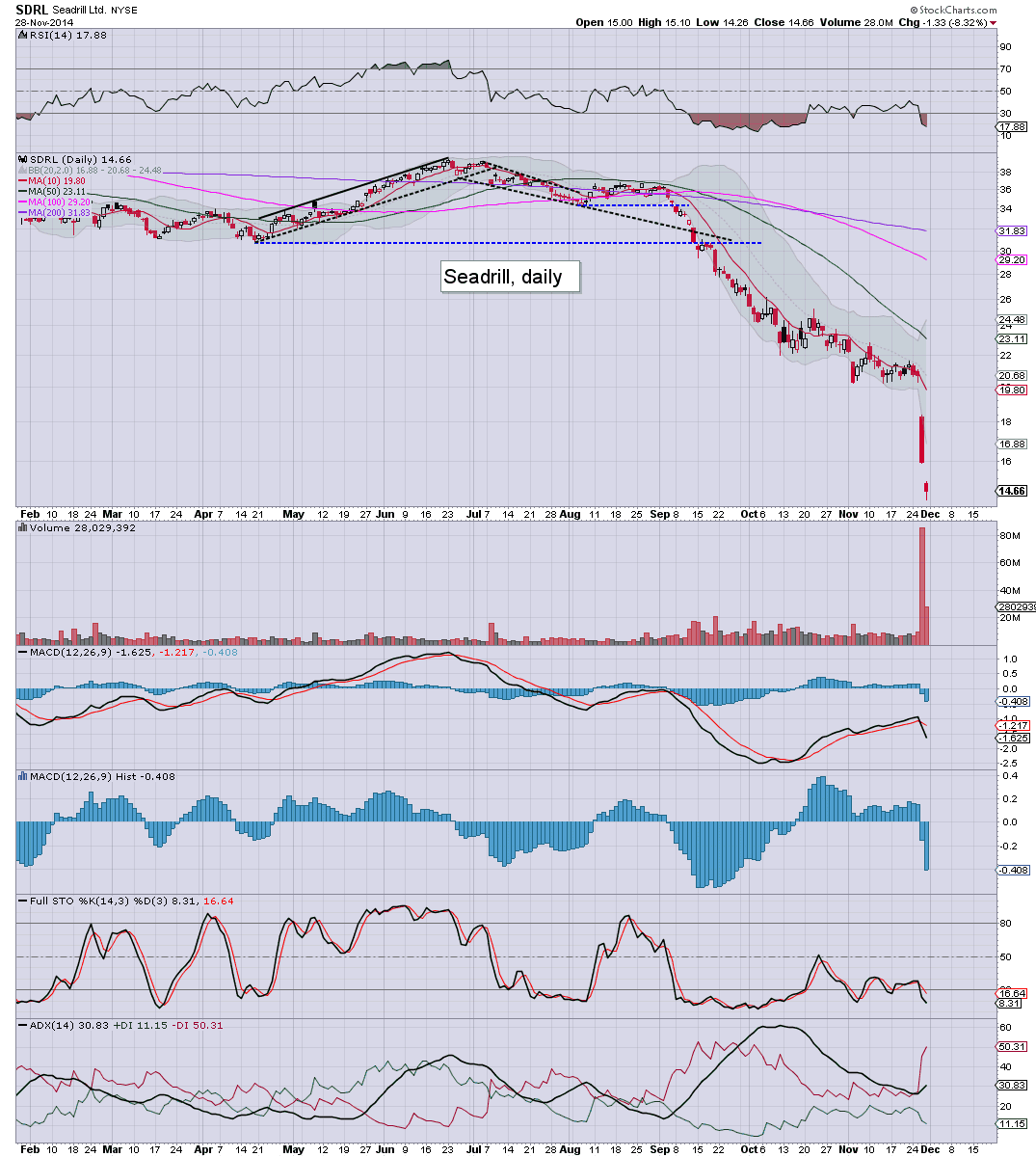 Approaching target of $12.... 10 now seems likely. The dividend looks unlikely to be (even partly) reinstated until Q4 of next year.... I don't think Mr Market has fully priced that in yet.
- 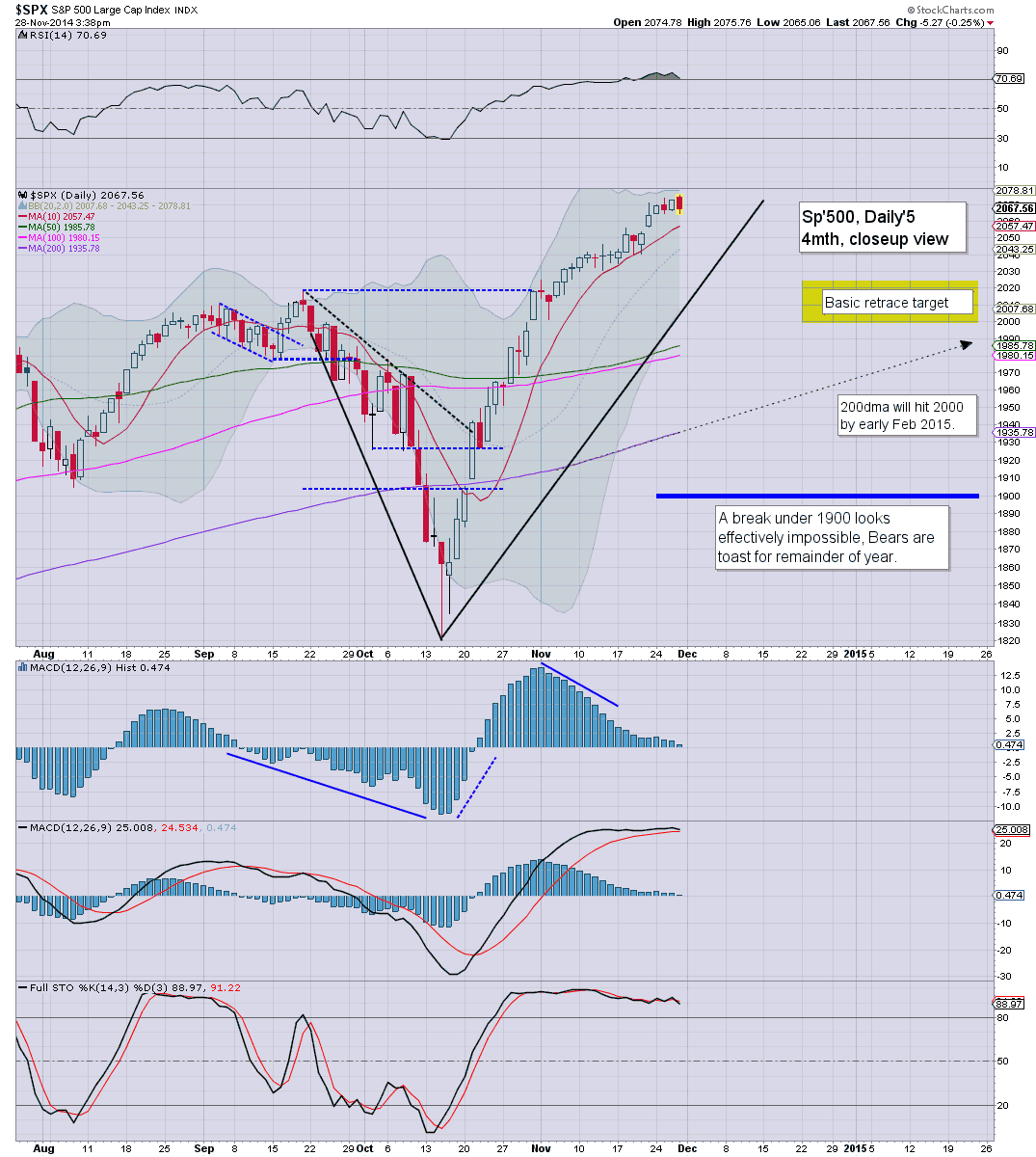 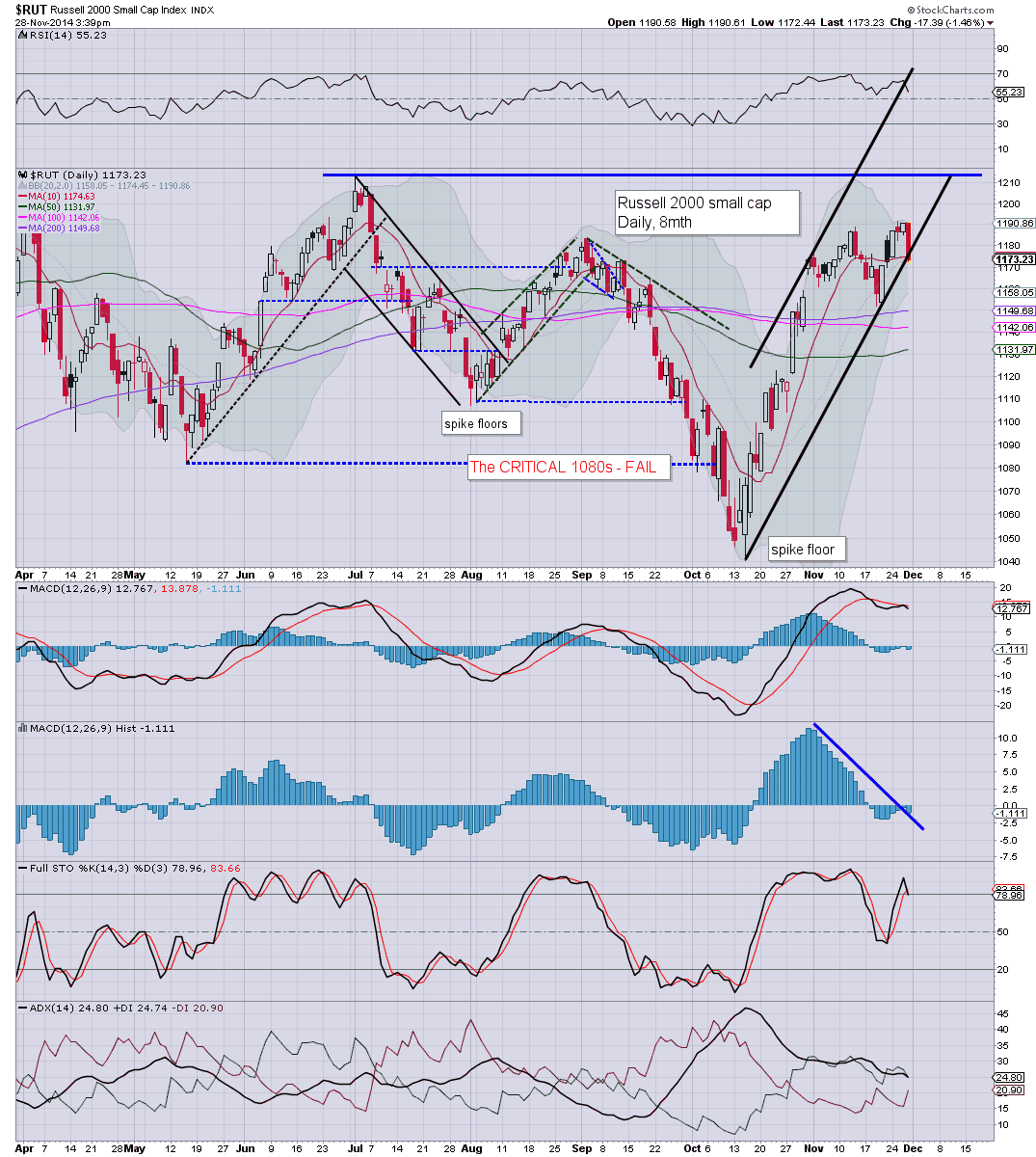 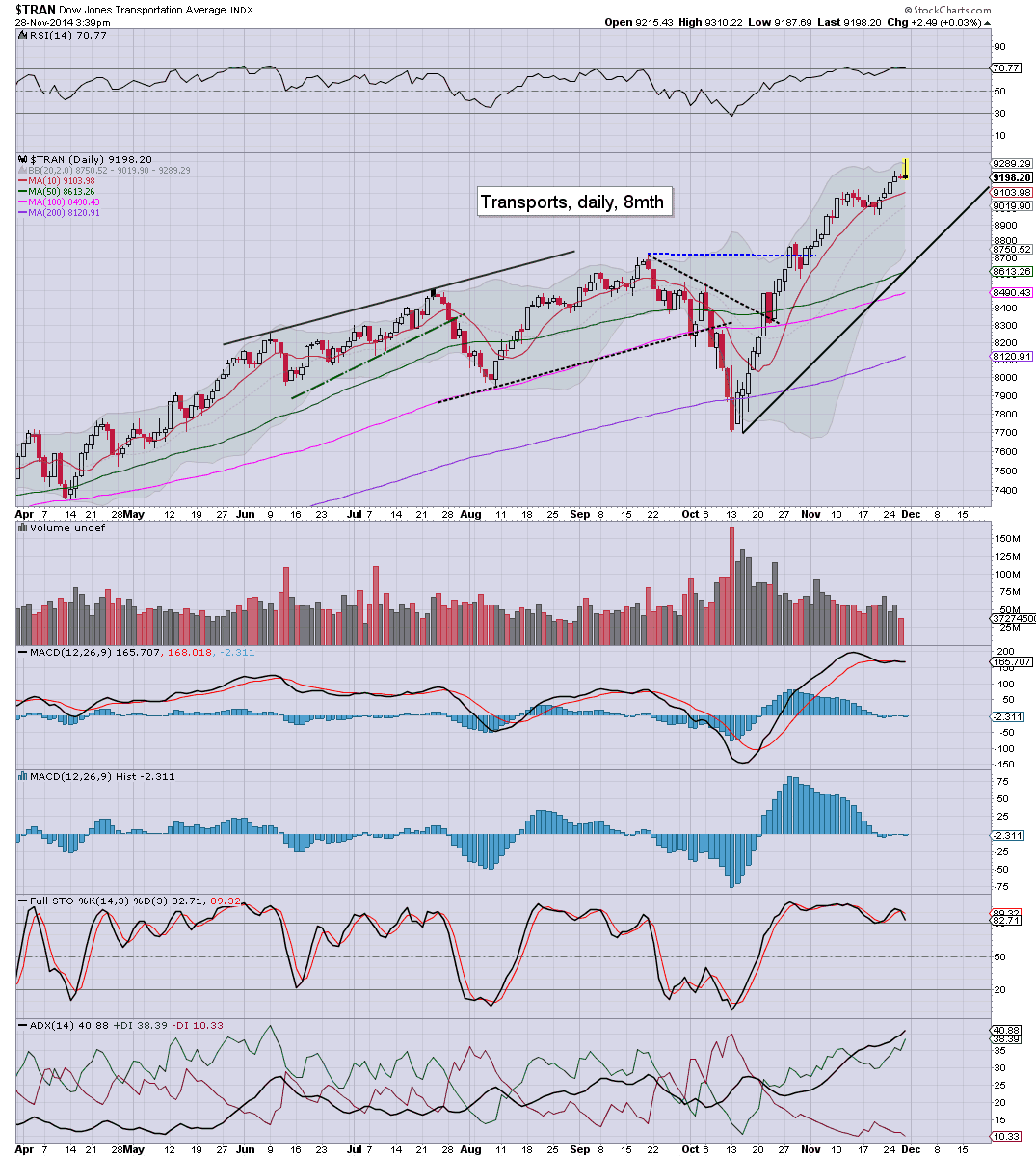 There is zero reason why the market can't keep on clawing higher.. at least to the sp'2110/30s... before a moderate pull back.

The only thing that is holding the market lower than it otherwise would be... the energy sector... but then lower energy prices are bullish for the rest of the economy. In the bigger picture, its a small trade off.. nothing for the equity bull maniacs to be concerned about.
--