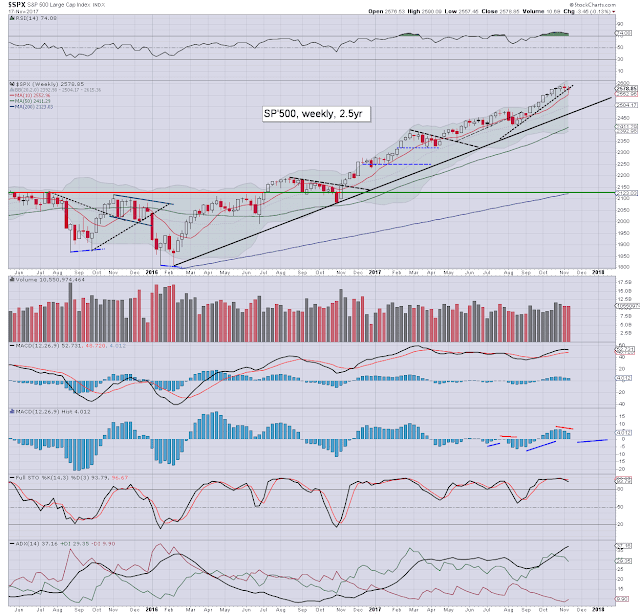 The sp' settled fractionally net lower for a second consecutive week, -3pts at 2578. There is a clear break of soft rising trend that stretches back to the Aug' low of 2417. The Wed' low of 2557 does look rather secure though, and considering broader market price action and structure, a push into the 2600s looks possible as early as next week.

Best guess: a little weakness next Monday, but then a push into the 2600s, certainly by end month. By year end, the market has a fair chance of trading within the 2650/700 zone. That will clearly need almost everything to go right, with a rate hike, and oil sustainably around/above $60.

Equity bears have nothing to tout unless a bearish monthly close, which to me, would equate to a monthly close under the monthly 10MA (currently at 2456). That number is set to jump by 35pts at the Dec'1st open. So, unless 2017 settles under 2490 or so, the m/t bullish trend can be said to remain intact.
-- 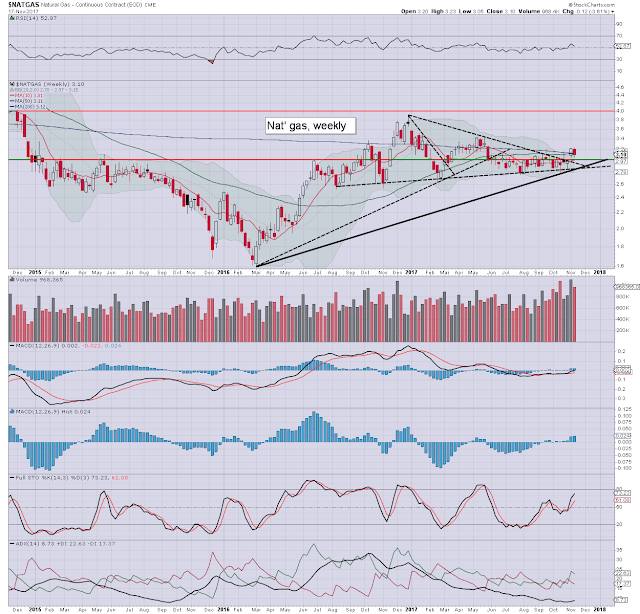 The tech saw a net weekly gain of 0.5%, and with a notable new historic high of 6806. Upper weekly bollinger will be offering the 6900s before end month. The 7000s are due in December, with the 8000s a valid target for late spring 2018. Broadly, Q3 earnings were unquestionably good, and in some cases (MU, INTC, CSCO) outright superb. There is little reason to expect the current m/t trend not to hold for some considerable time to come. 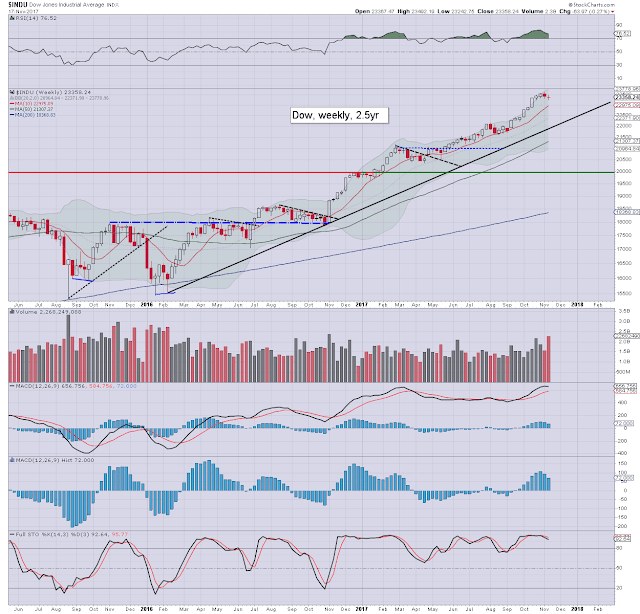 The mighty Dow was the laggard this week, settling -0.3% at 23358, but that is still very close to recent hist' highs. Indeed, the upper weekly bollinger will be offering the 24000s in December. Underlying MACD (blue bar histogram) cycle ticked lower for a second week, but its arguably just cooling like August or March. Note the weekly 10MA that has held since April. No price action <23k can be expected for the remainder of the year. 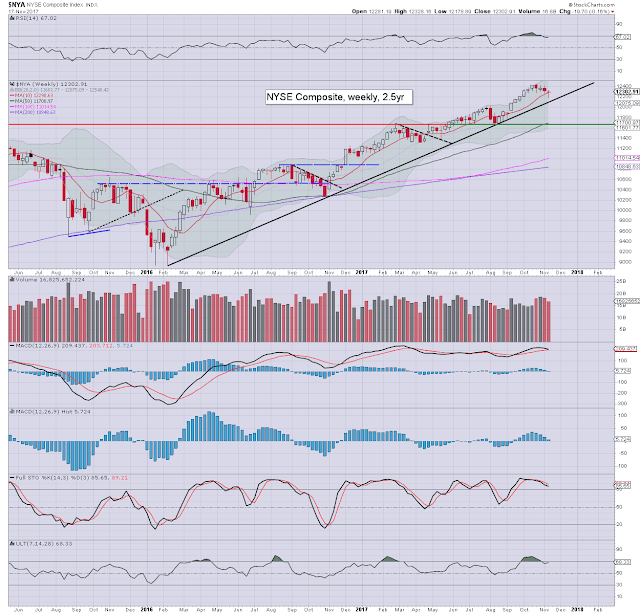 The 'master' index settled net lower for the third week of four, -0.2% at 12302. Things would arguably only turn bearish if <12k, and that looks very unlikely before year end. Upper bollinger will be offering the 12600s before end November. The 13000s look a stretch by year end. 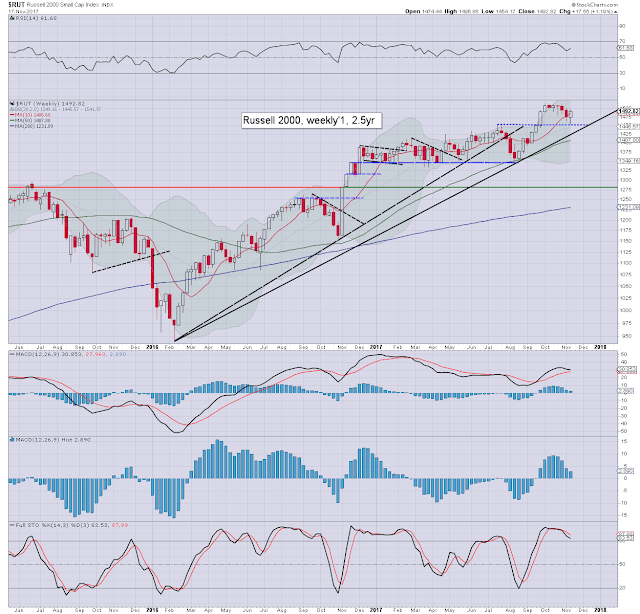 The second market leader - R2K, was the leader this week, with a net gain of 1.2% to 1492. There was an intra week low of 1454, which is around a rather important price threshold, that stretches back to July. With the Thurs-Friday rebound, the bulls can be looking for new hist' highs (>1514) into early December. 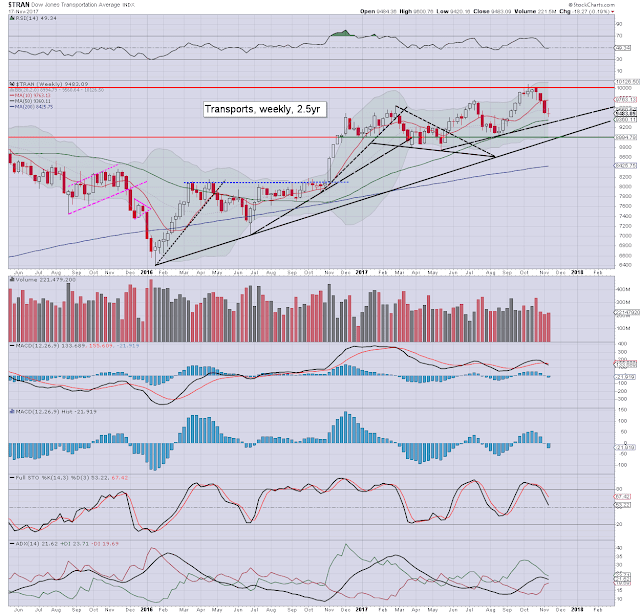 The 'old leader' - Trans, settled lower for a fourth consecutive week, -0.2% at 9483. The tranny has seen a clear initial failure to break and hold the giant 10k threshold. Despite the bearish run, things really only turn bearish <9300, and considering the broader collective of indexes, that looks unlikely. Arguably, its now merely a case of whether the tranny settles the year a little above.... or below 10k. I'm leaning on the former.
--

A mixed week for US equity indexes, with minor weakness in the Dow and Trans, but a sig' gain in the R2K.

The US market is still regularly generating new highs, with this week seeing a new hist' high in the Nasdaq comp'.

Most indexes have 3-5% of downside buffer before the m/t bullish trend from early 2016 would be challenged.
--

It will be a very light 3.5 day trading week.