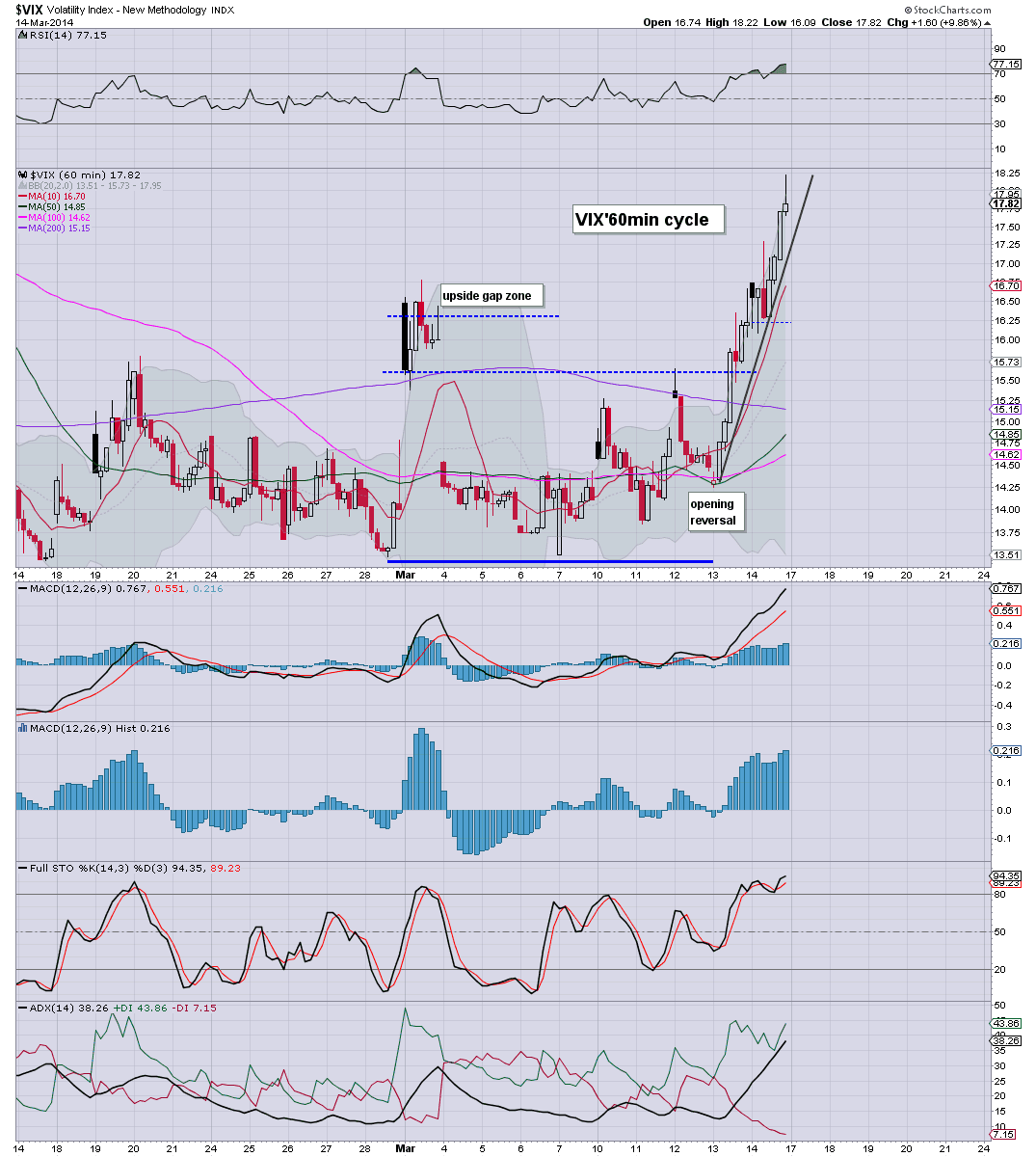 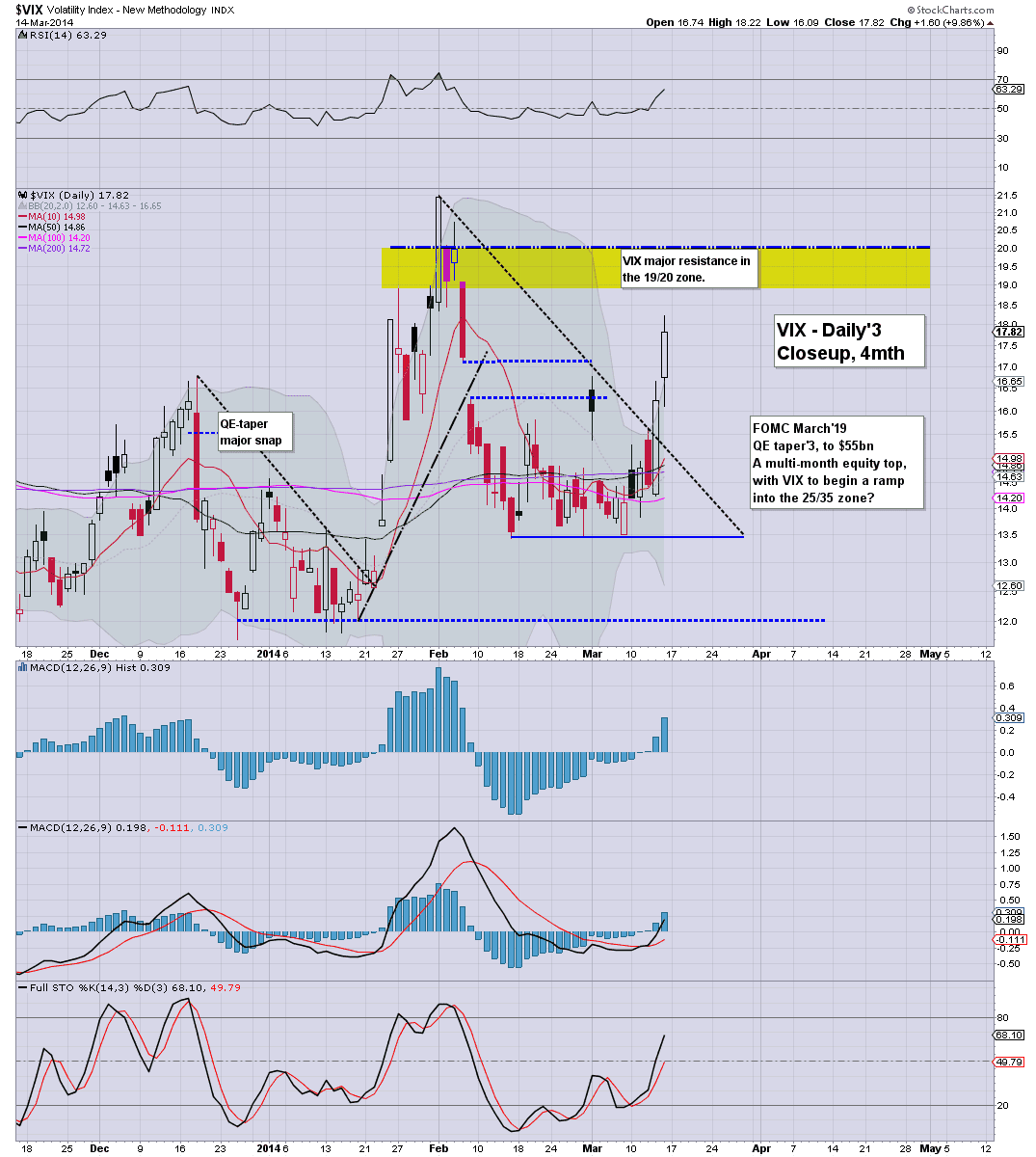 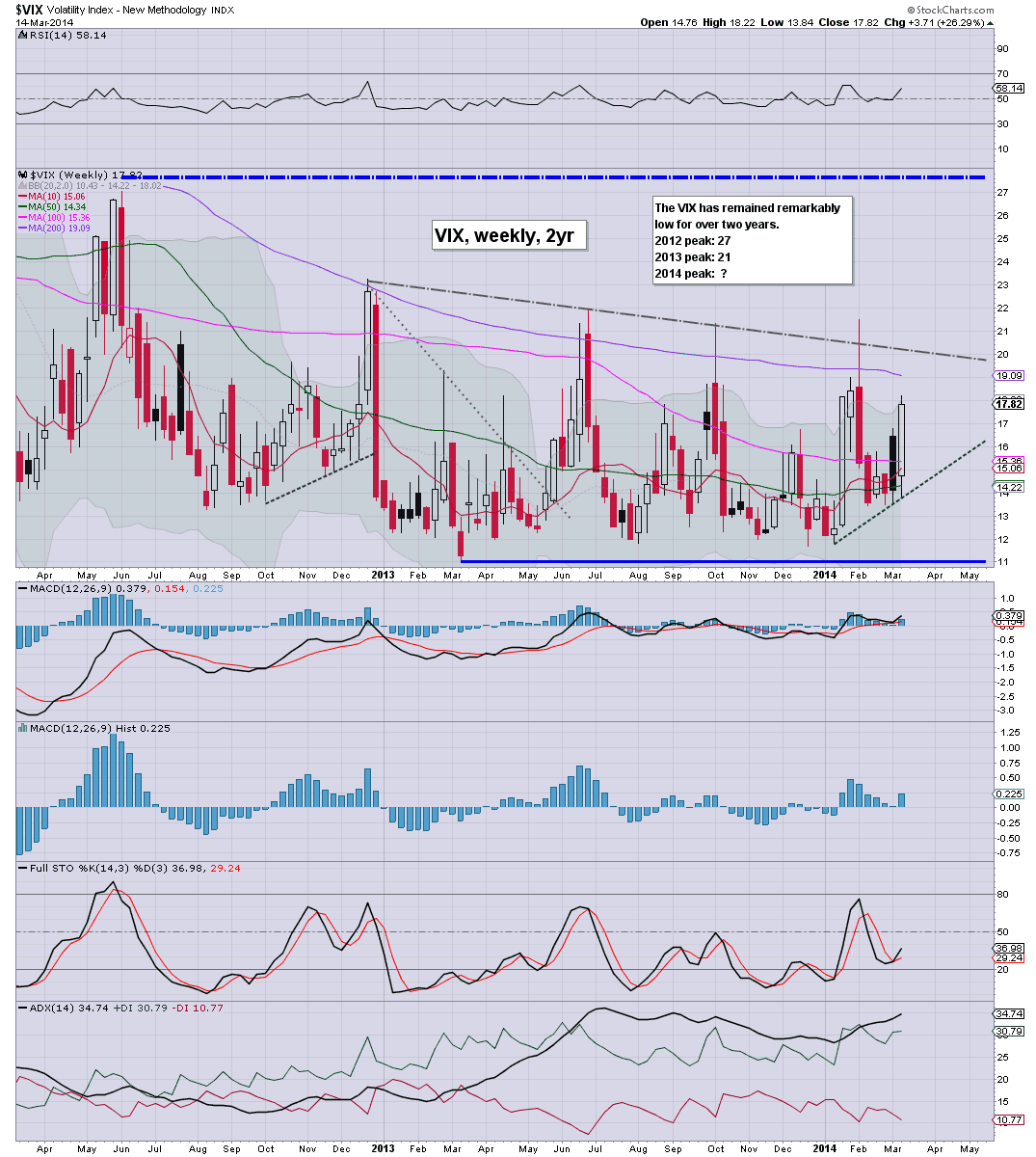 *probably the most notable aspect of the week, the VIX weekly gain of 26.3%
--

As many have recognised, 2014 is going to be a year of increased volatility. 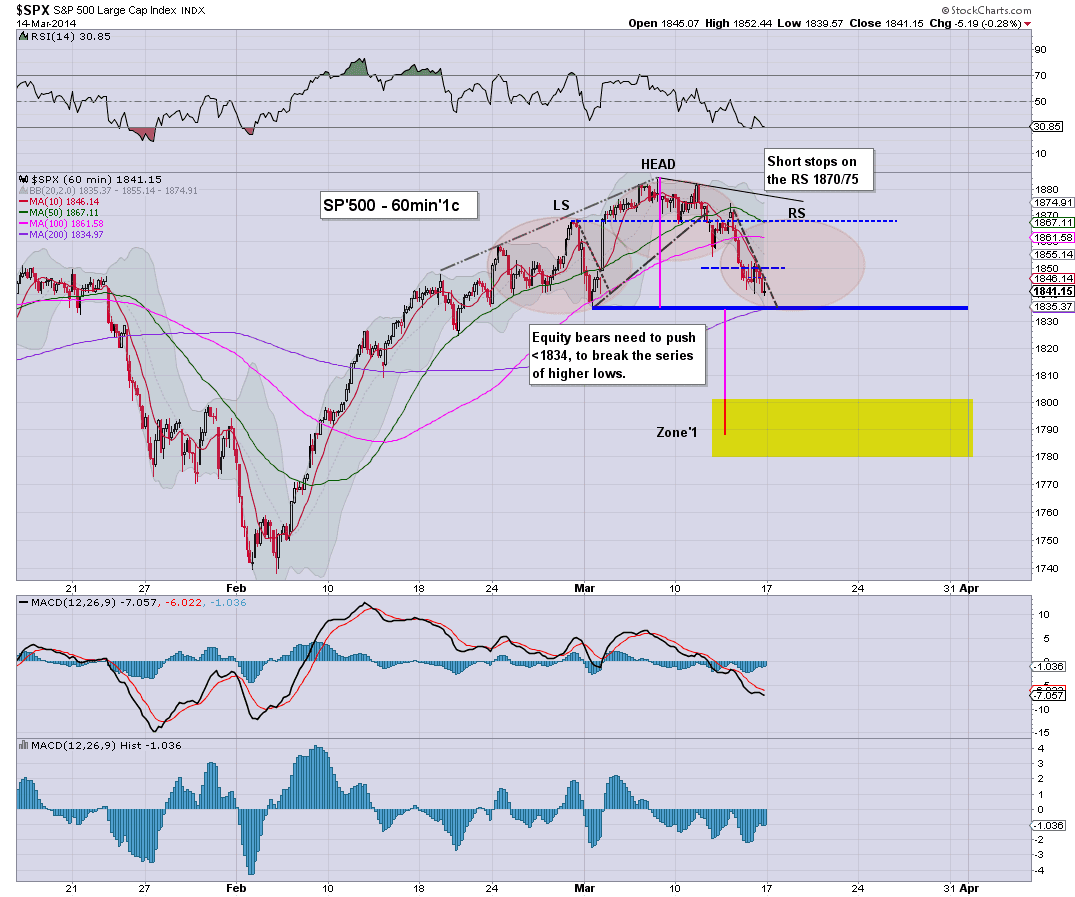 *the closing hour was indeed somewhat weak, with a marginal break into the 1830s.
--

All things considered, the market 'tremors' continue to increase, and we're headed a long way lower, first primary target is the Feb' low of 1737.

*the weekend post will be on the US weekly indexes
Posted by Trading Sunset at 20:03:00
Email ThisBlogThis!Share to TwitterShare to FacebookShare to Pinterest

There is next to zero reason why anyone will want to be going long the market into the weekend. It won't take much to achieve a weekly close in the sp'1830s, and that will provide an important weekly bearish warning. VIX is comfortably building gains...in the 17s. 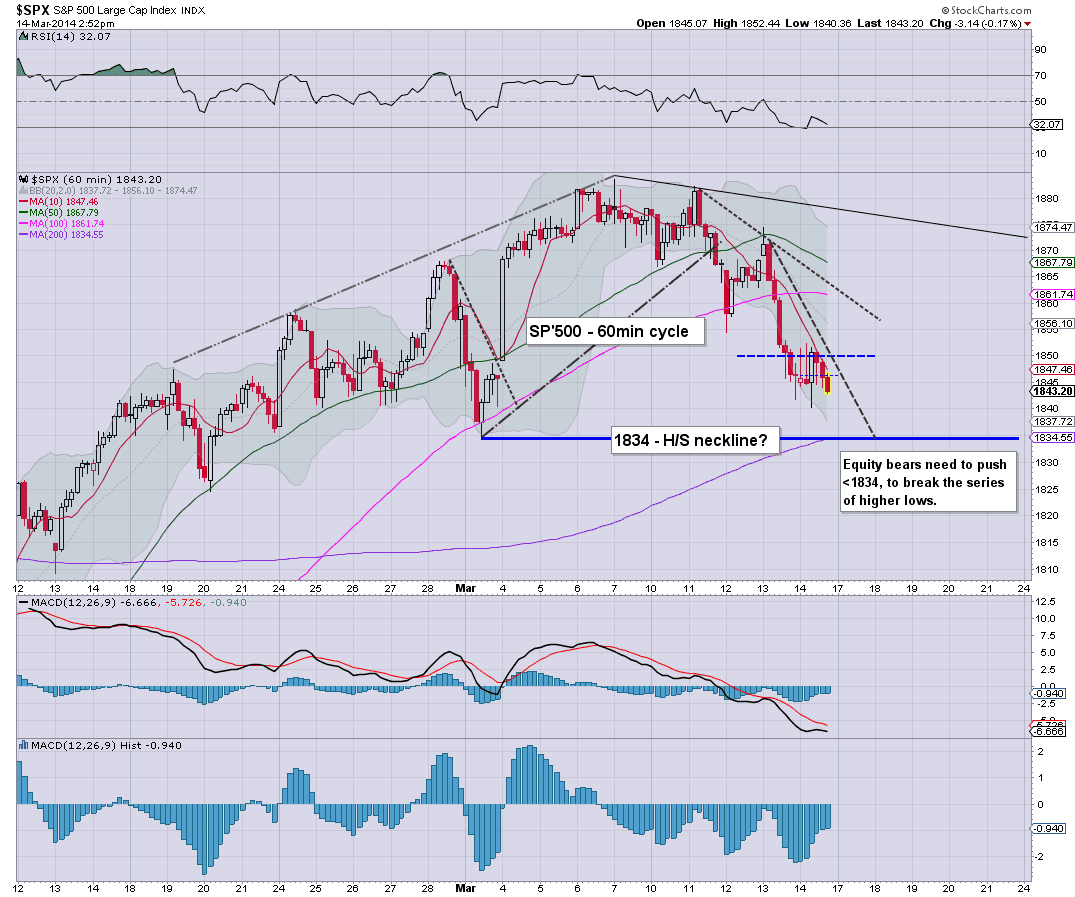 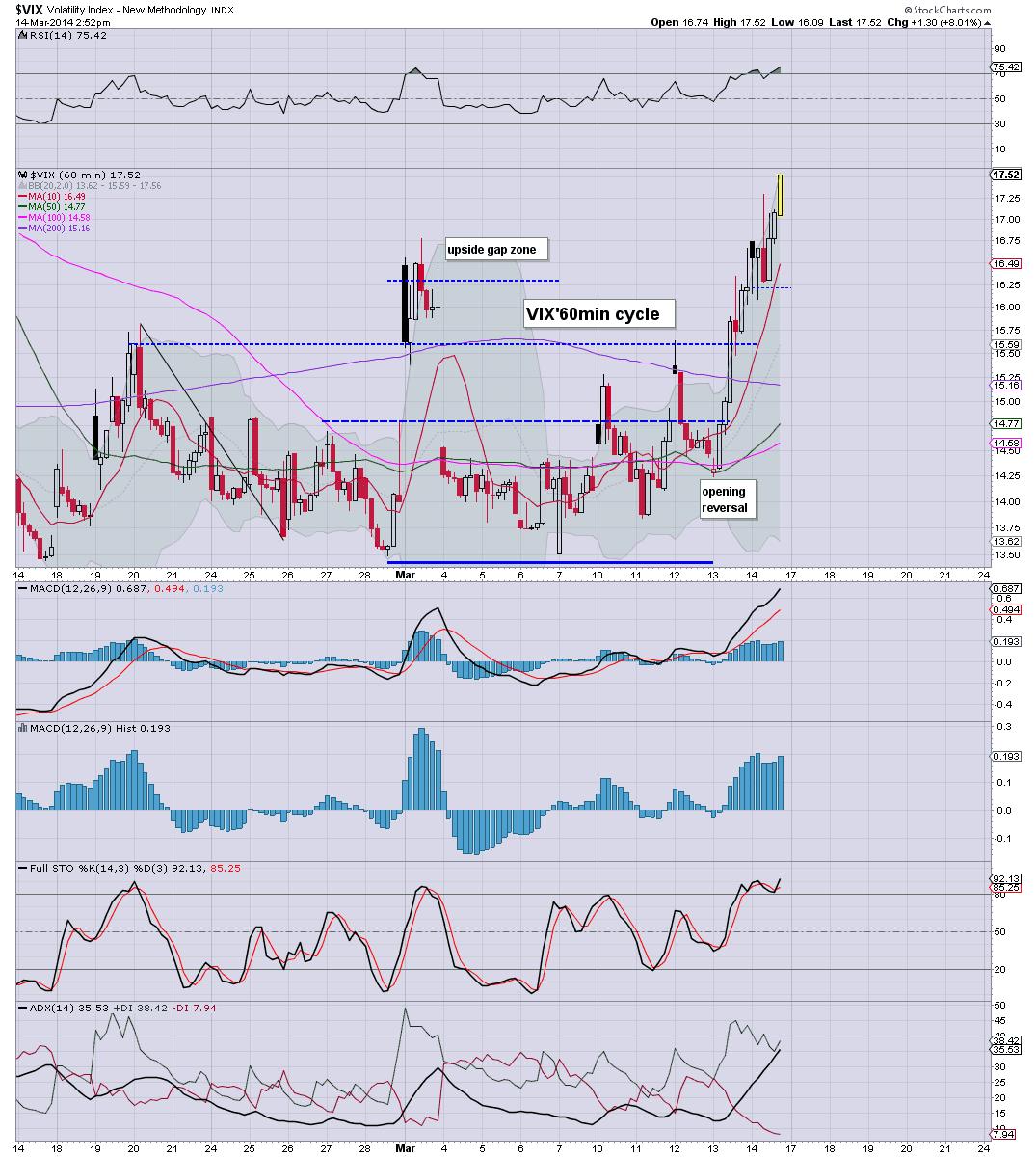 From there..I really hope we can bounce to form a RS into next Wednesday - around 1865/75.

I remain looking to launch a major re-short, but only after the next FOMC announcement.
--

*I'd still guess we rally on Monday...to Wed'

Again...those long VIX are getting a fine chance to exit here in the 18s.
Posted by Trading Sunset at 18:53:00
Email ThisBlogThis!Share to TwitterShare to FacebookShare to Pinterest

US equities are still unable to claw back above the hourly 10MA, and a daily close in the 1830s remains very viable. The weekly close <1863 is set to provide an initial bearish warning of trouble for the rest of March. Bulls..beware! VIX is fighting to hold the 17s. 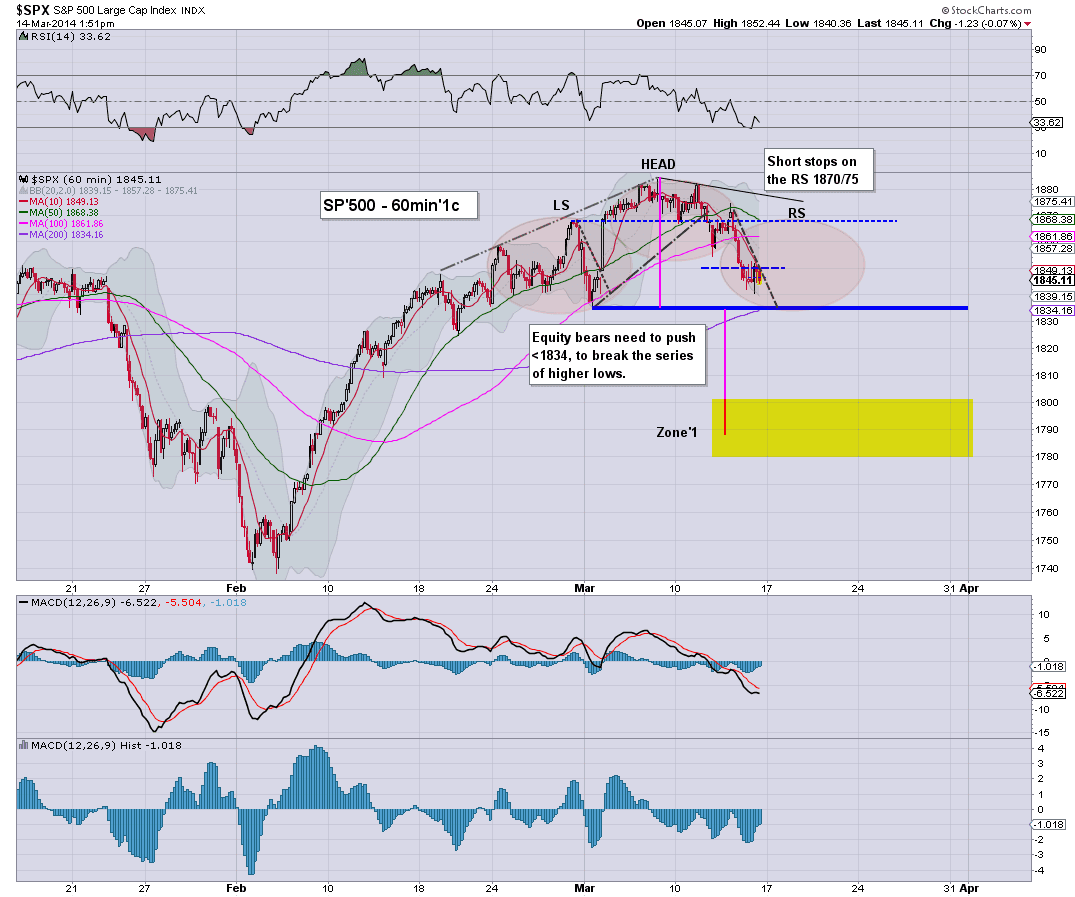 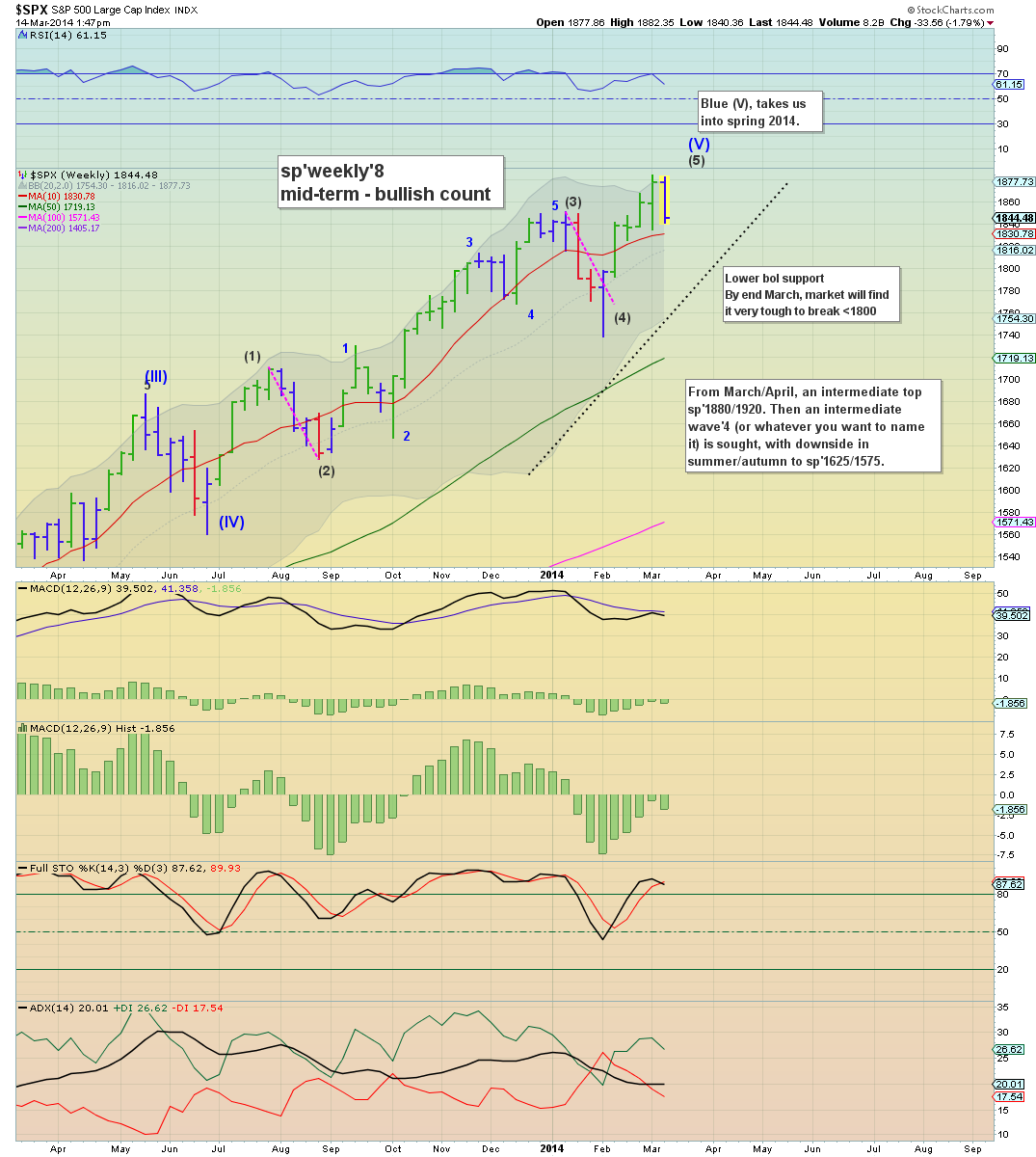 *a reminder on the weekly cycle, which is set to close the week with a blue candle.
--

I hope we floor in the 1830 area - just around the 50 day MA, and then launching a major re-short next Wednesday becomes pretty easy.

Just 3 days to go :)
Posted by Trading Sunset at 17:51:00
Email ThisBlogThis!Share to TwitterShare to FacebookShare to Pinterest

Equity bulls are still unable to clear the (usually) important hourly 10MA around sp'1850 - which itself is still falling each hour. A daily close in the sp'1830s is still very viable, and that would be a pretty decisive bearish weekly close. Metals continue to cool... Gold +$4. 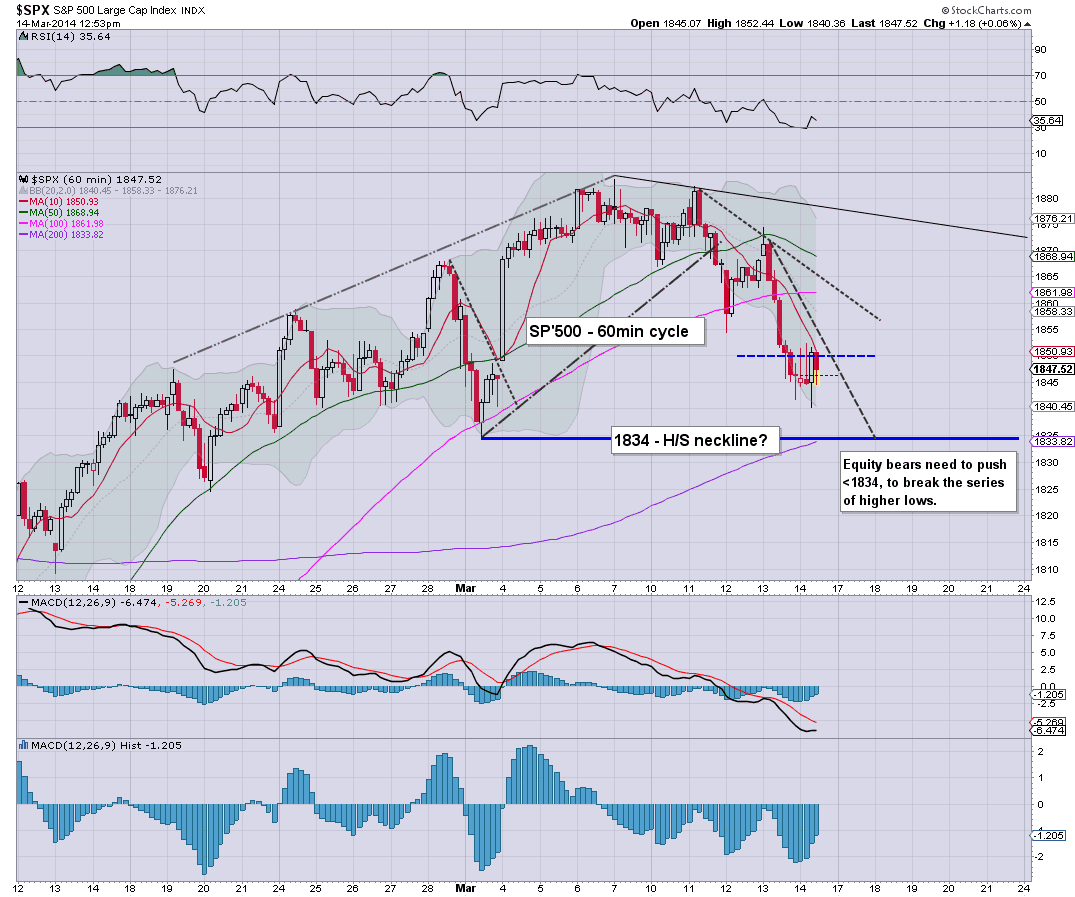 *it remains kinda quiet out there today, and I think many are starting to just walk away as the market is largely seeing minor chop.
--

Notable weakness: DRYS, TWTR, TSLA, all lower by around -2%

It has been a choppy morning, from opening declines, minor gains..but then another down wave, and marginally breaking the Thursday low of sp'1841. Metals are cooling down, Gold swinging from +$15 to +$5. VIX is similarly cooling, from the 17.20s to the 16.60s. 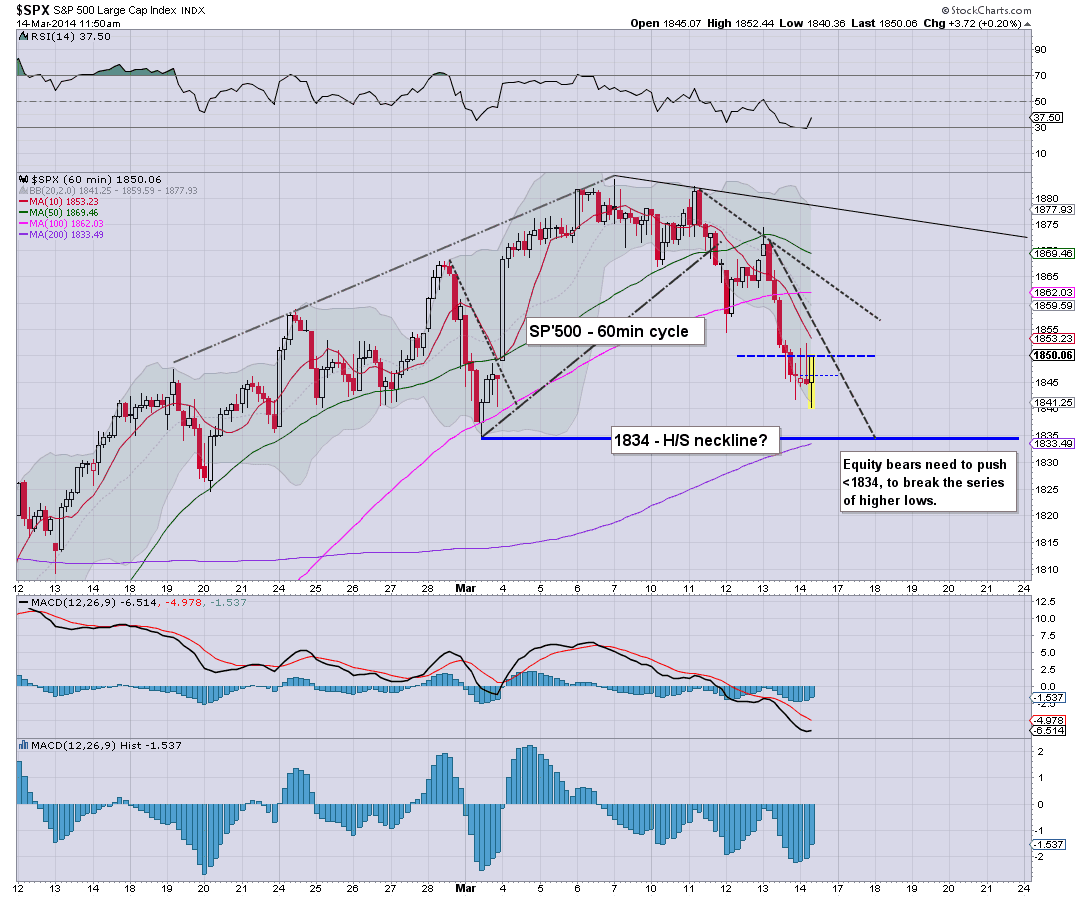 The irony is that we're only 33pts from last Friday's high.

I'm still inclined to see a further wave lower to at least 1834. It simply makes little sense for the market to have broken <1850..only to get stuck at 1840.

An interesting afternoon ahead!
--

12.34pm... the chop continues....won't take much to kick this down into the 1830s.
Posted by Trading Sunset at 15:51:00
Email ThisBlogThis!Share to TwitterShare to FacebookShare to Pinterest

The market is holding minor gains, but the underlying weakness of the past few days is still there. VIX is still fractionally higher, and is reflective of the uncertainty across the coming weekend - not least from the Crimea vote. Metals are holding significant gains, Gold +$13 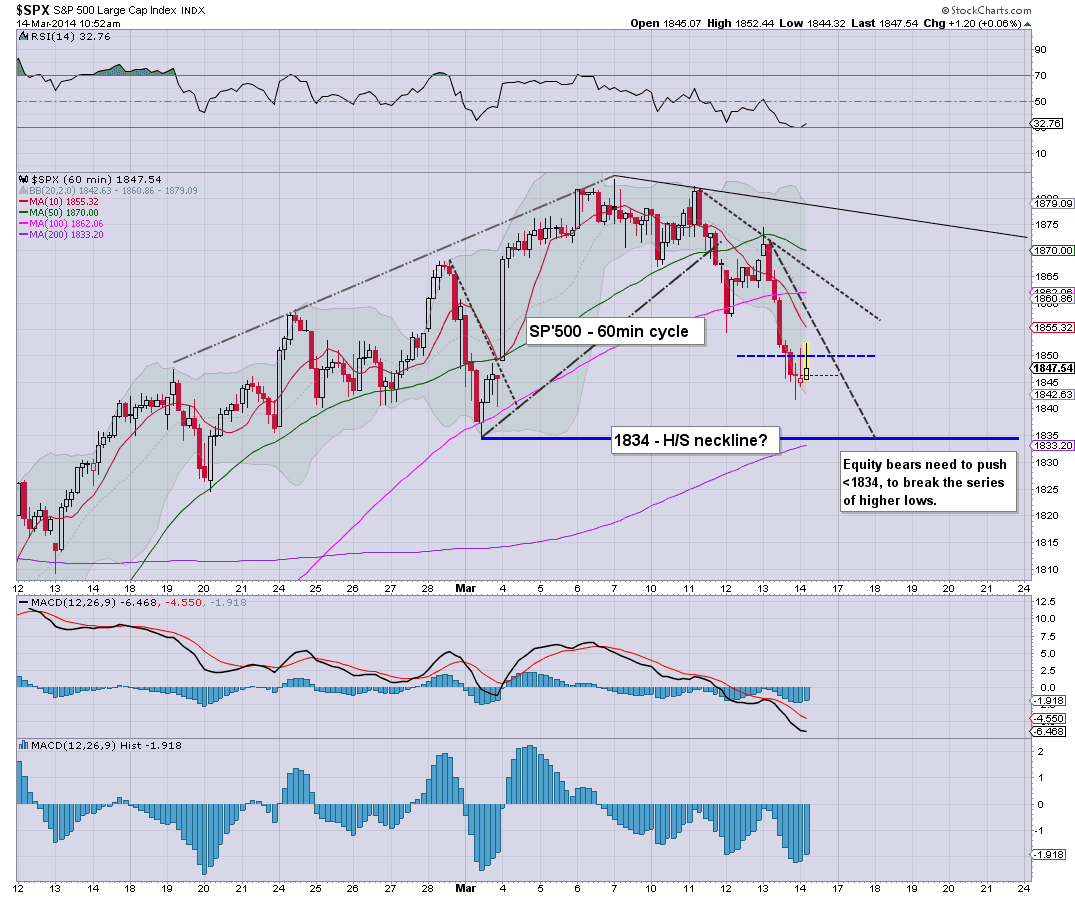 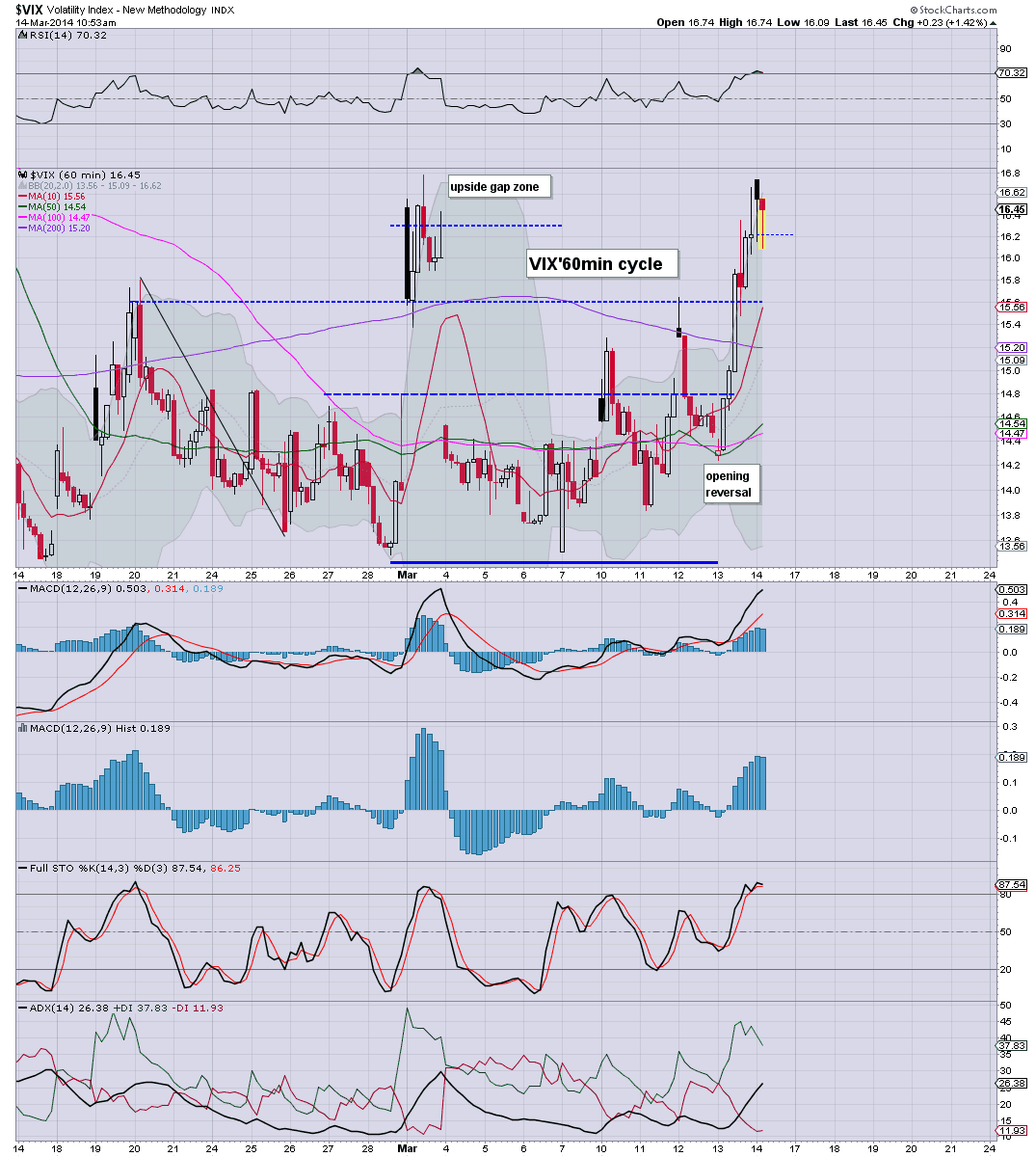 There appears high likelihood the indexes will roll over again today, and the next obvious target remains the key low of 1834.

Regardless...who wants to be going long into the weekend?   Urghhhhh

Equities open with some minor weakness, but the opening black-fail candle on the VIX is a warning that the equity bears are losing control - at least for a little. Precious metals are sharply higher, Gold +$15, with Silver +2.7%. 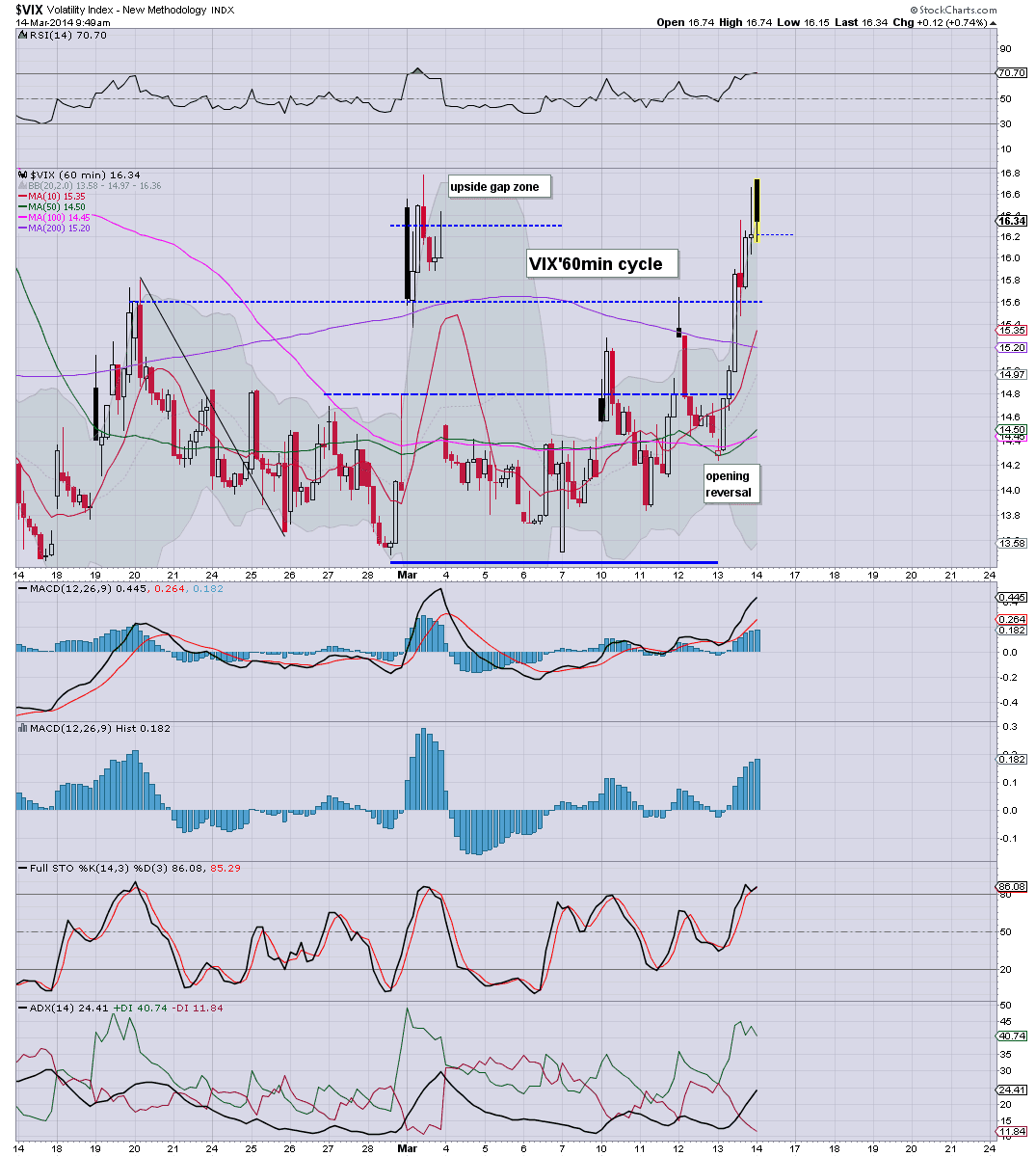 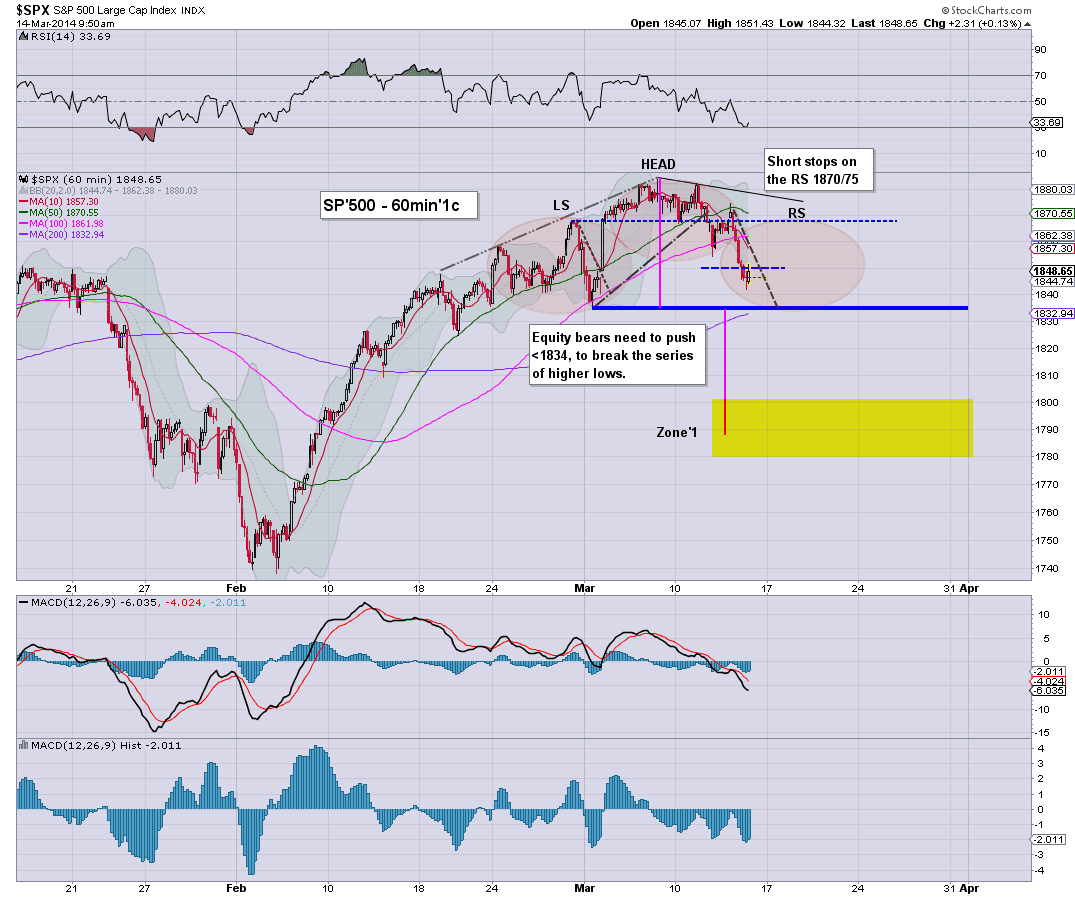 So..minor chop to start the day, and the bull maniacs are pushing to turn things around.

However, yesterday's break <1850 was significant - the damage HAS been done, and we will surely at least resume a fall to 1834 at some point, whether later today..or early Monday.
--

As ever, the question is... who wants to go long into the weekend?

*keep in mind the key threshold for a bearish (weekly cycle) warning is ANY close <1863..which frankly. does seem very likely.


10.22am.. sure is tempting to short this market in the 1855/57 zone..if we're there by 11am.
Posted by Trading Sunset at 13:52:00
Email ThisBlogThis!Share to TwitterShare to FacebookShare to Pinterest

Good morning. Futures are slightly lower, sp -1pt, we're set to open around 1845. Equity bulls face continued problems as the market is getting increasingly rattled from both geo-political and economic concerns. Metals are higher, Gold +$3, with Silver +1.5% 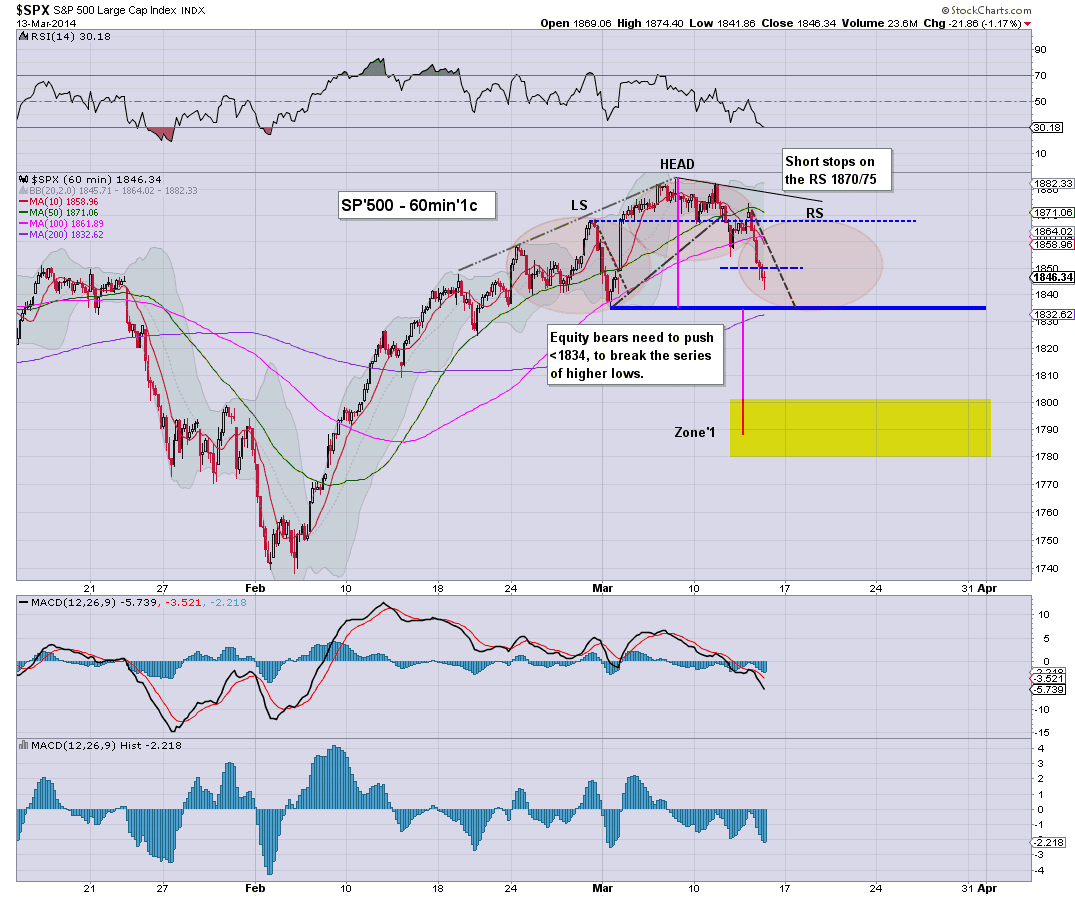 *the above is just one of the scenarios I will be keeping in mind early next week. It is a favourite though, since a re-short on a RS bounce would make for a rather easy trade setup.
--

So...it has been an interesting week, today won't likely be boring!

If we can hold the 50 day MA - currently sp'1828, and bounce early next week, then I'll consider shorting any bounce into next Wednesday. Until then, I want to give the bulls another chance to push back higher.

I will agree with Hunter that is it odd to see Obama do spoof interviews, whilst the Russians are massing troops.

A weekly close <1863..will be the first warning of trouble...and bears look likely to achieve that today.


9.42am.. black-fail candle on the VIX.... equity bears..have a problem right now.
Posted by Trading Sunset at 12:18:00
Email ThisBlogThis!Share to TwitterShare to FacebookShare to Pinterest

The weekly close will be important

How we close the week will be important, not least for those watching the primary up trend on the weekly index cycles. Equity bulls should be desperate for a weekly close >sp'1863, but that now looks somewhat difficult, as the market remains concerned about some key geo-political issues. 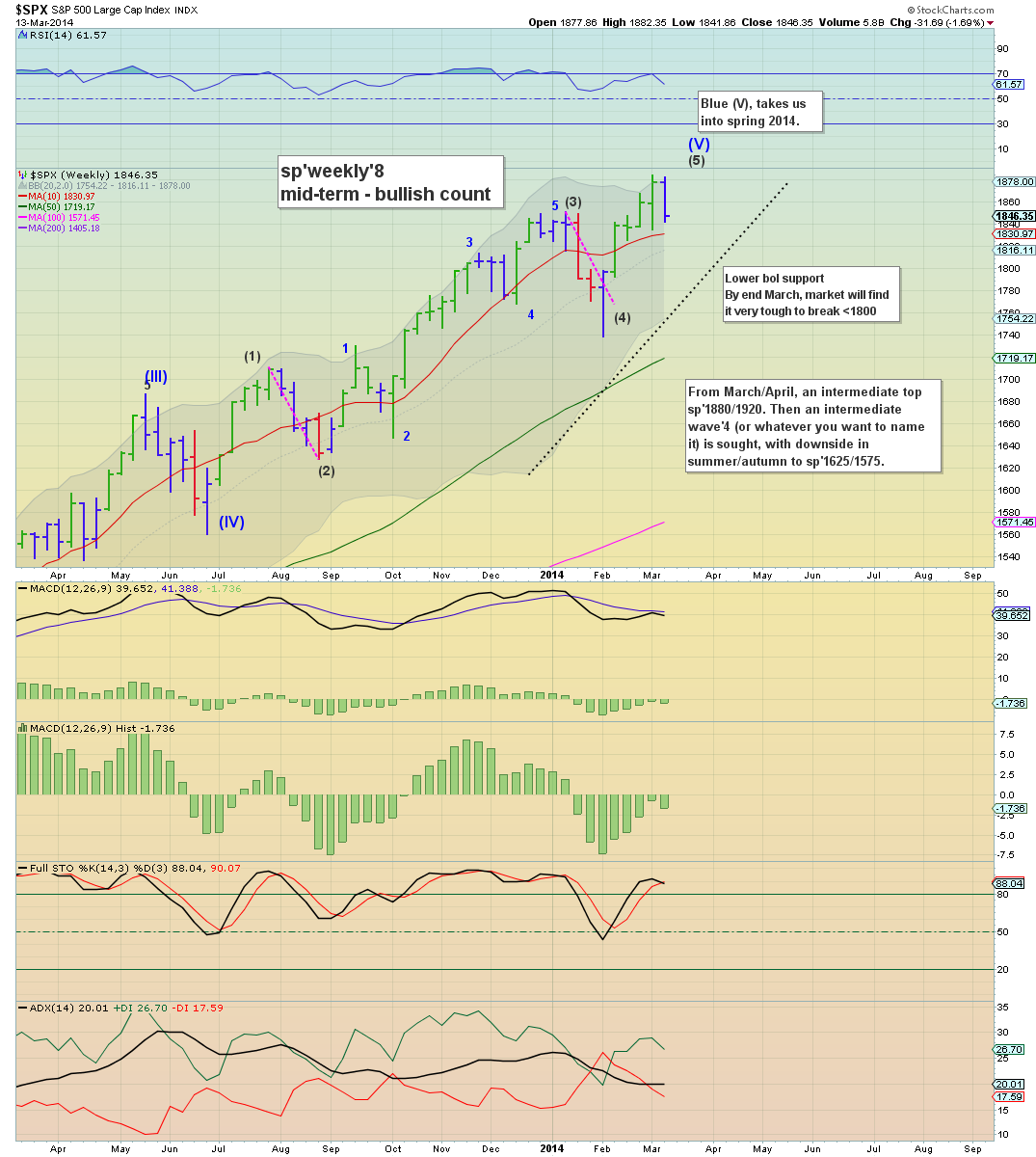 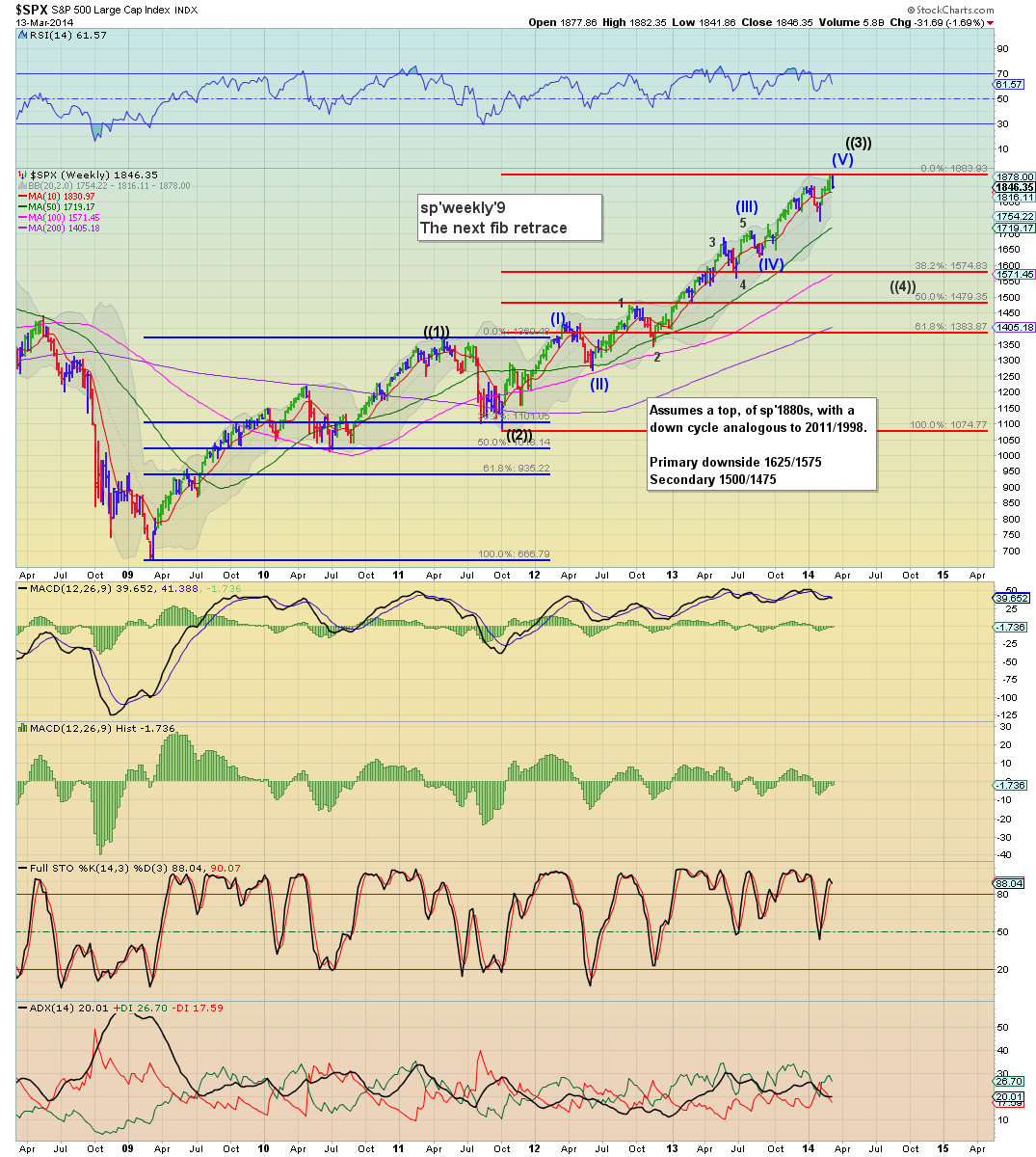 The threshold for another green candle on the weekly 'rainbow' chart is sp'1863. If we do close the week with a blue candle it will be the first initial warning of trouble.

That sure doesn't mean we can't rally back to the 1860/70s early next week, but it does bode badly for those bulls seeking the 1900s, a level that now looks increasingly difficult.

re: chart weekly'9. I hold to the original outlook of a multi-month decline, and the 1625/1575 zone remains a very natural target for this spring/summer.
--


The EU powerhouse is rolling over

The German DAX is lower by almost 7% this month, and if an intermediate top is now in...the equity bears should set their targets a fair ways lower... 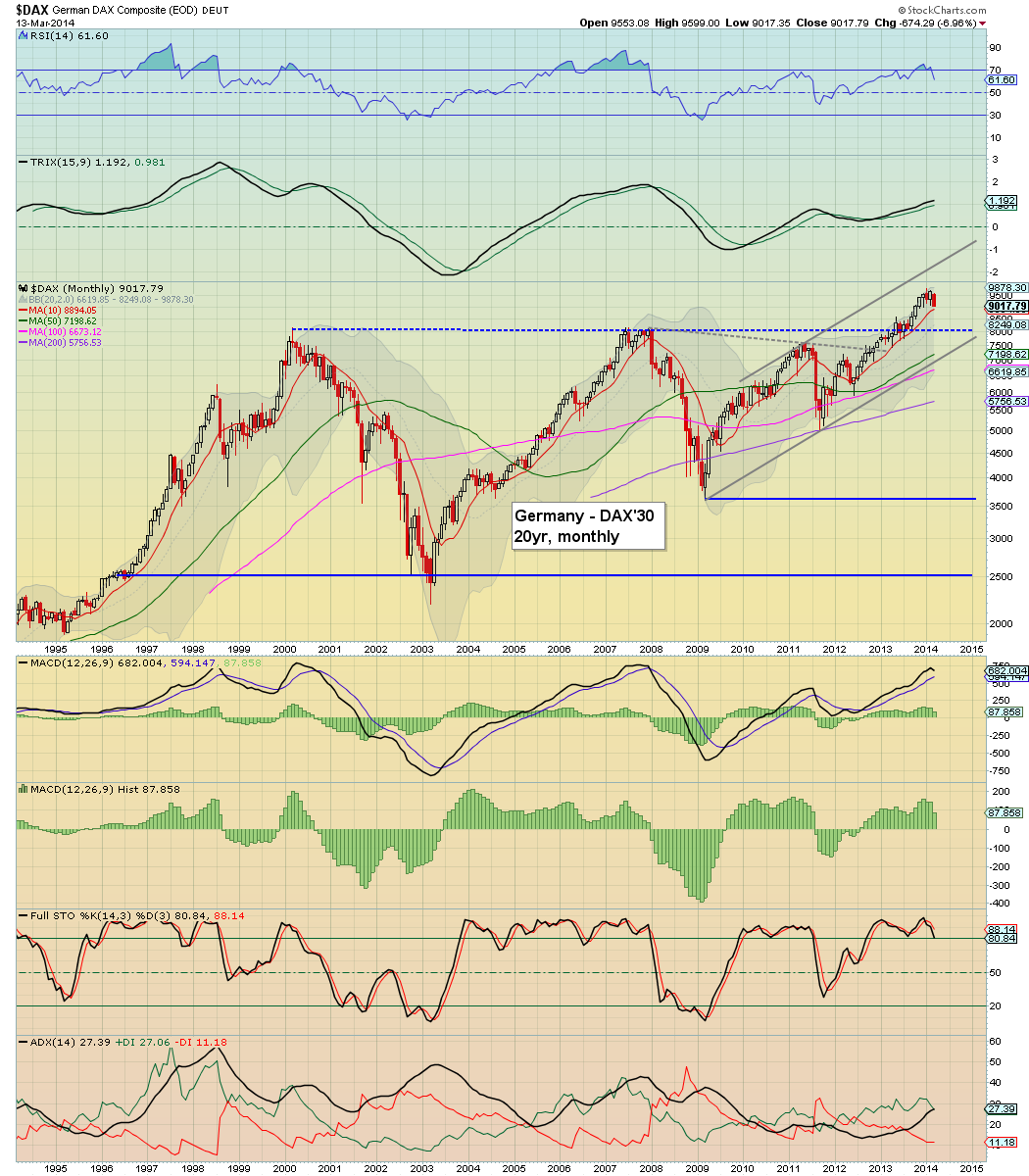 We have PPI and consumer sentiment. Perhaps the market though will pay more attention to what Fed official Fisher has to say?


Looking forward to next week

I want to end the day with just a few thoughts on next week. First, next week will be largely about the FOMC. Now, we know the decision will very likely be 'QE taper'3', with monthly QE reduced by a further $10bn a month to 'only' $55bn, beginning in April. However, we know this market will increasingly weaken as the QE fuel is reduced.

Of course, there is also the Ukrainian/Russia situation, and any 'drama' there would really send the world markets into a spiral. As it is, I don't expect any developments there for at least another week or two...until after the FOMC.

As for what I'm doing, I remain patiently awaiting the FOMC. If the price action looks toppy next Wednesday afternoon, I will probably launch the first index shorts since last summer. It has been a long time to wait, but perhaps...it will be worth it. If anything, re-shorting the market in the sp'1800s is a hell of a better short-entry than the 1500s. 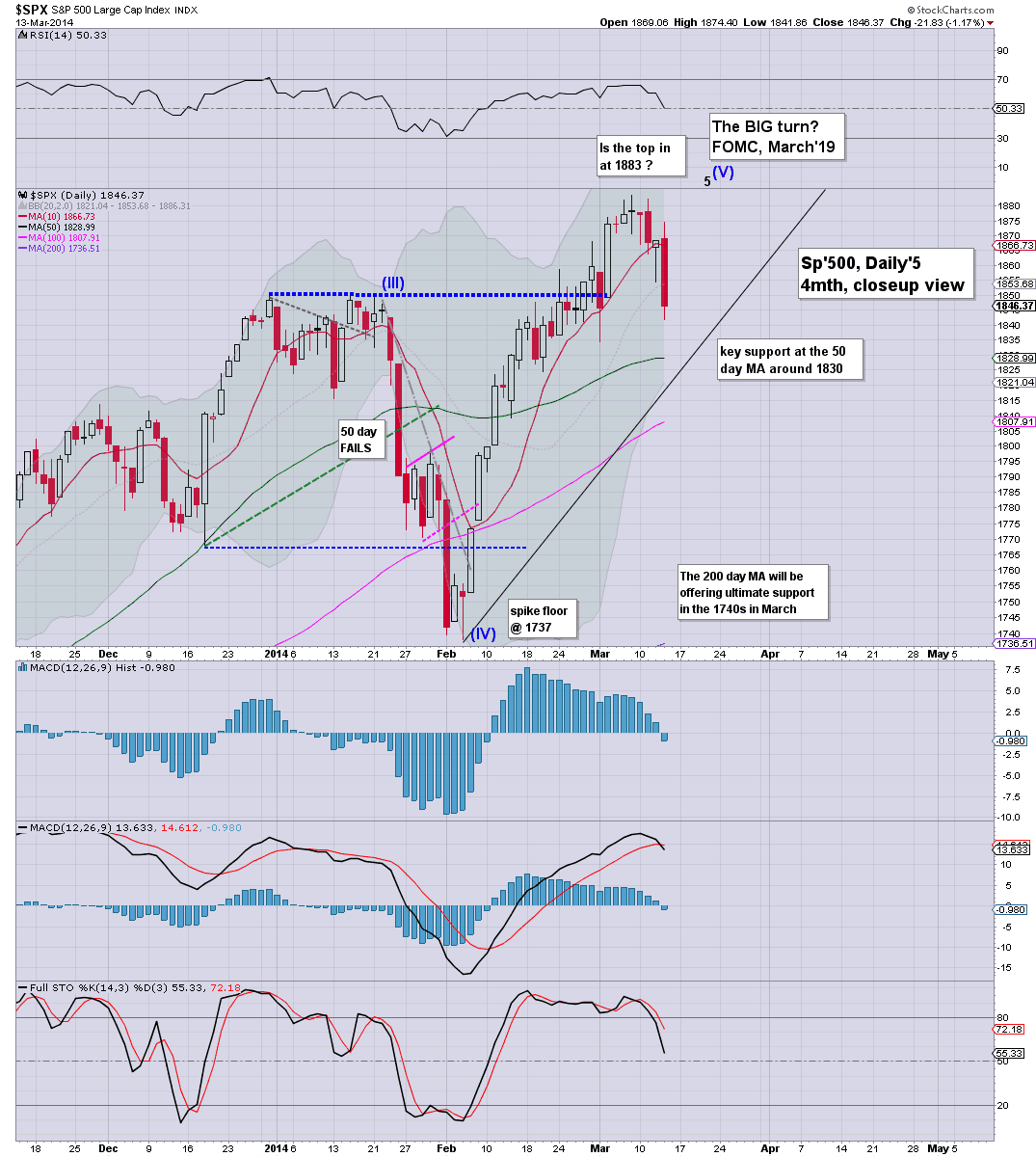 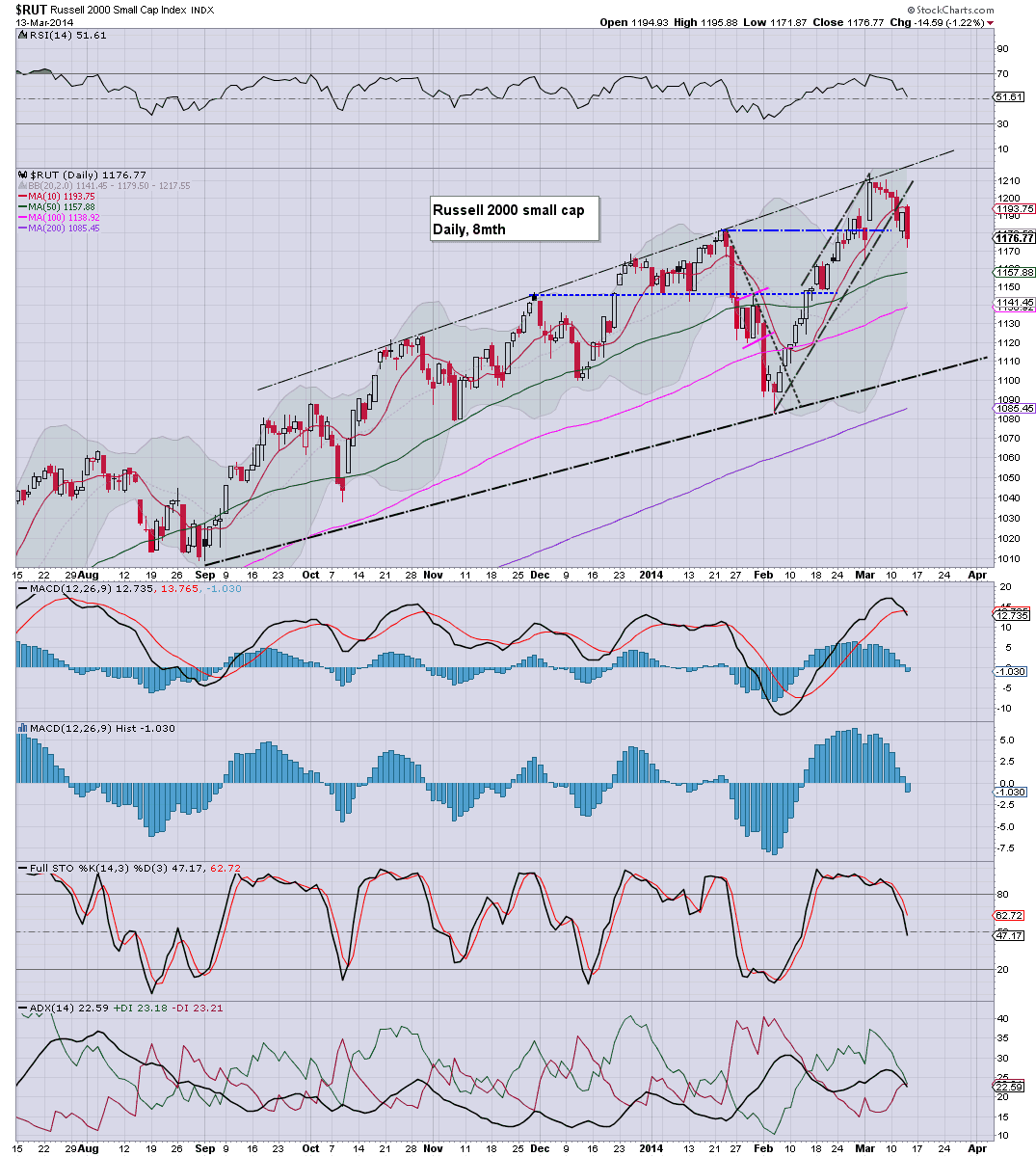 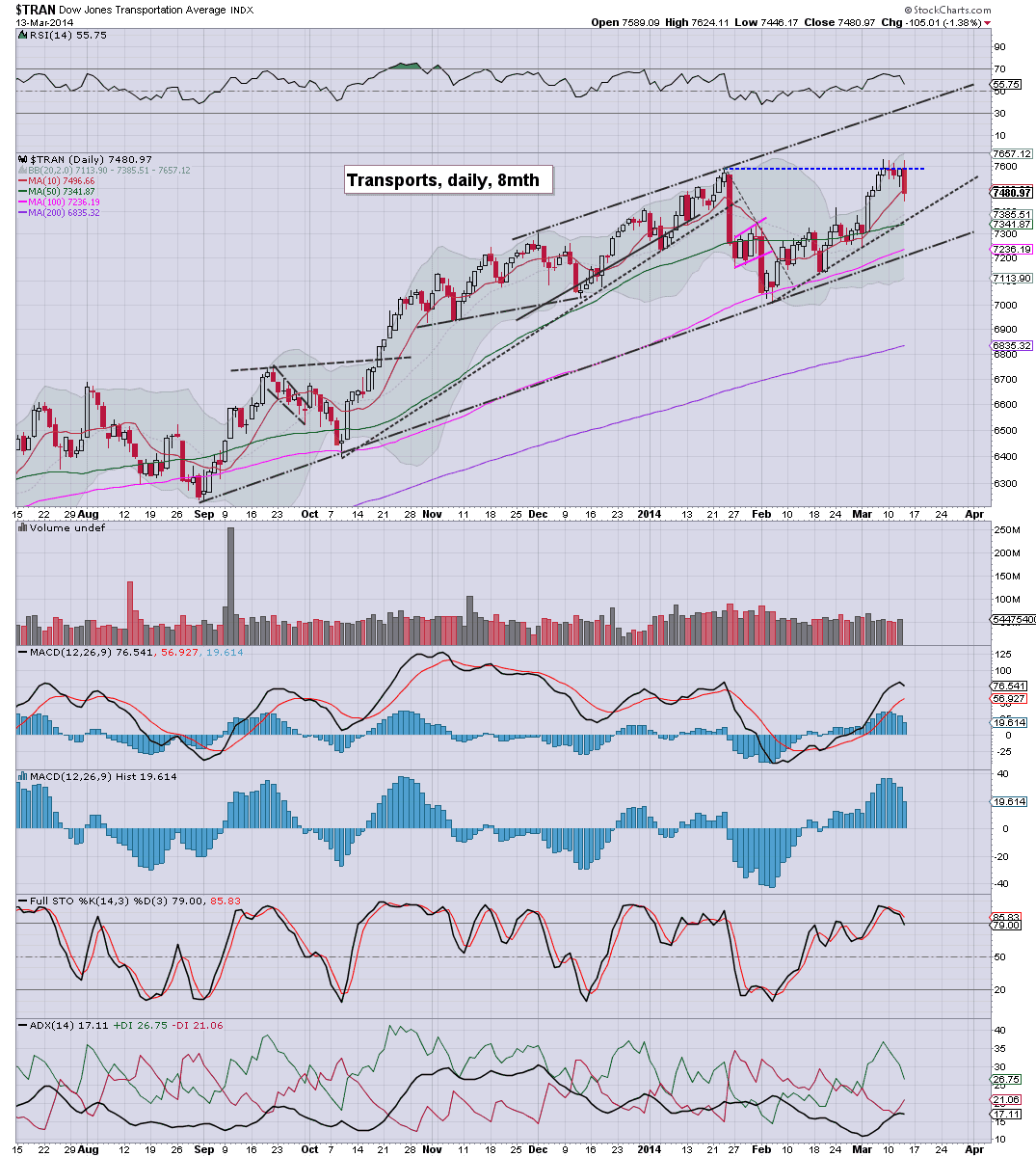 So...the first significant decline across all indexes since Feb'3.. when we floored at 1737.

The weekly/monthly charts are still broadly bullish, but another week or two of this sort of choppy/toppy price action in the sp'1830/80 zone, and market will be at very high risk of a multi-month decline.

The weakness in the two leaders is especially bearish for late March/April. Things are starting to get kinda interesting :)