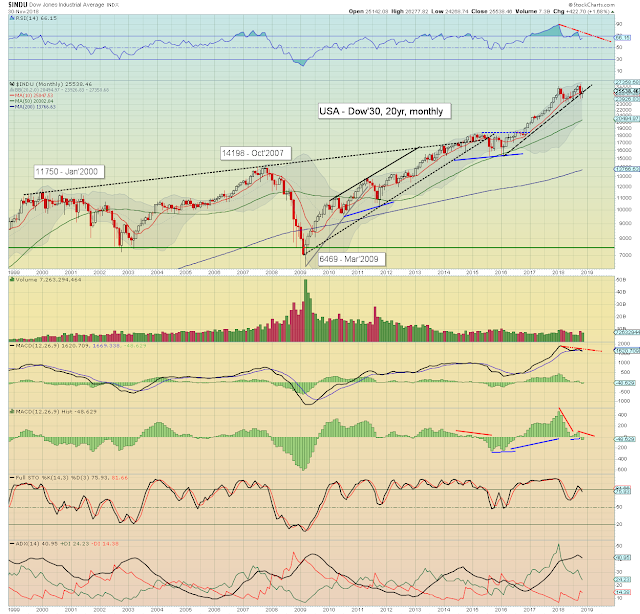 The mighty Dow saw a net monthly gain of 422pts (1.7%) to 25538. Note the key 10MA at 25047, which the Dow is managing to hold above. Underlying macd (green bar histogram) cycle ticked lower for a second month, as price momentum currently favours the equity bears.

For confidence, the bulls need to break above the Oct' historic high of 26951, which is 1413pts (5.5%) to the upside. Such a historic high would fully clarify that recent price action was merely a multi-month retrace much like 2015/16. Things would arguably only turn bearish with a monthly settlement under the key 10MA.

US economic data continues to come in broadly fine. Q3 GDP is 3.5%, whilst Friday saw the Chicago PMI jumping to 66.4... far above the recessionary threshold of 50.0. Housing data isn't pretty, but that doesn't negate what is indeed a 'broadly fine' picture.

The Fed are clearly set to raise rates 25bps to a new target range of 2.25-2.50% this Dec'19th. Further hikes in 2019 will not be easy, especially if the EU is imploding. It remains the case that the ultimate equity sell signal would be the suspension of QT and/or a rate cut. For now.... there is zero sign of that happening, which by default... leans bullish US equities.
-- 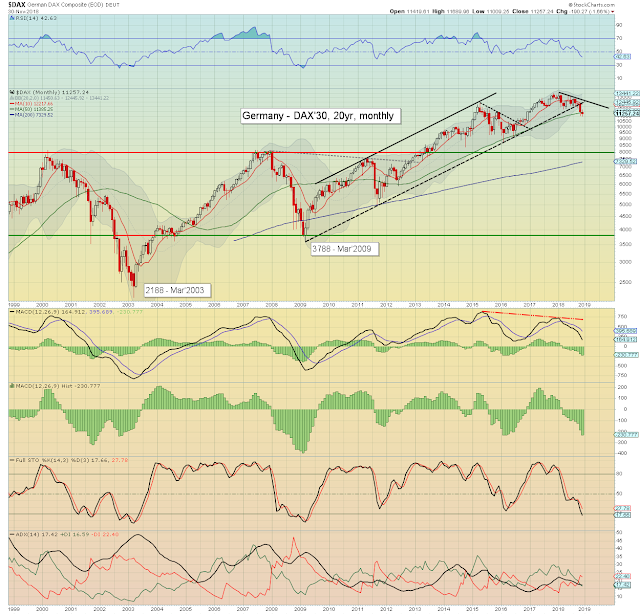 The German market fell for a fourth consecutive month, the 8th month lower of 11, settling -1.7% to 11257. The decisive break of l/t trend seen in September remains a major problem, and threatens broader downside to 8k in 2019. Things only turn bullish with a monthly settlement back above the key 10MA, currently at 12217.

NIRP via the ECB continues to be a destructive factor for the German financials. Deutsche Bank remains a ticking time bomb, having broken a new historic low of $9.10 on Friday.

Q3 GDP printed -0.3%. If Q4 also prints negative (data due in January) then Germany will officially be in recession. As goes Germany... so the rest of the EU.
-- 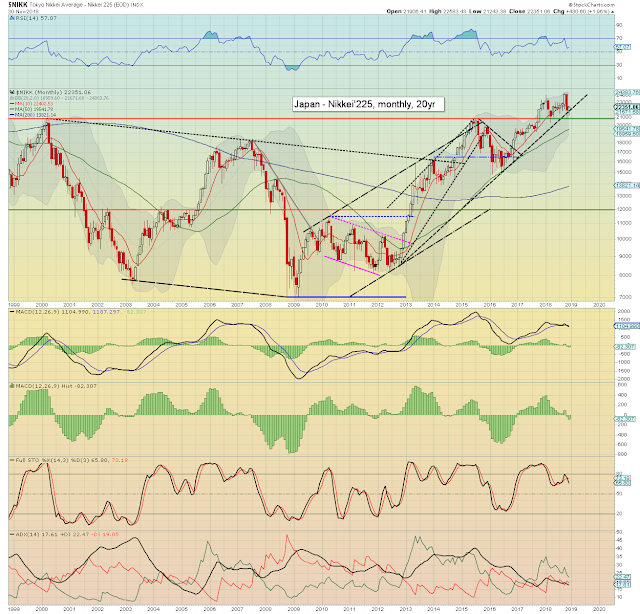 The Nikkei settled +2.0% to 22351. Underlying macd ticked lower for a second month. Further, the l/t trend from 2012 is fractionally broken. Things would turn very bearish with any sustained price action <21k. 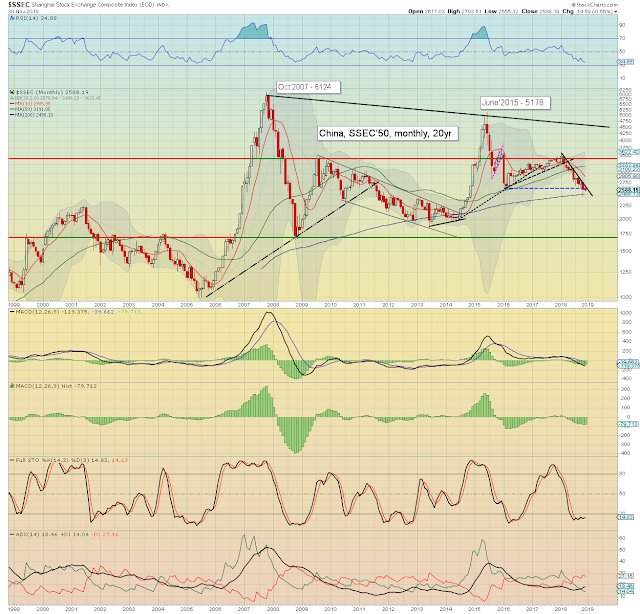 The Chinese market remains m/t bearish, lower for the 4th month of 6, settling -0.6% to 2588. The Chinese economy has all manner of problems, not least one of consumer debt. A trade agreement with the US would certainly help swing this market back upward. 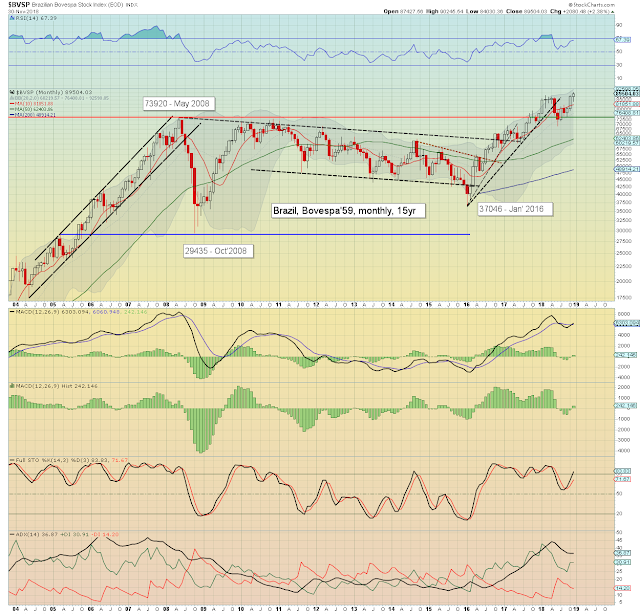 The Brazilian market climbed for a third consecutive month, breaking a new historic high of 90245, settling +2.4% to 89504. The market has been clearly inspired with the recent presidential election of Bolsonaro. Technically, monstrous psy' 100k is on the menu for 2019. A rebound in commodity prices (esp' oil and nat' gas) would help. 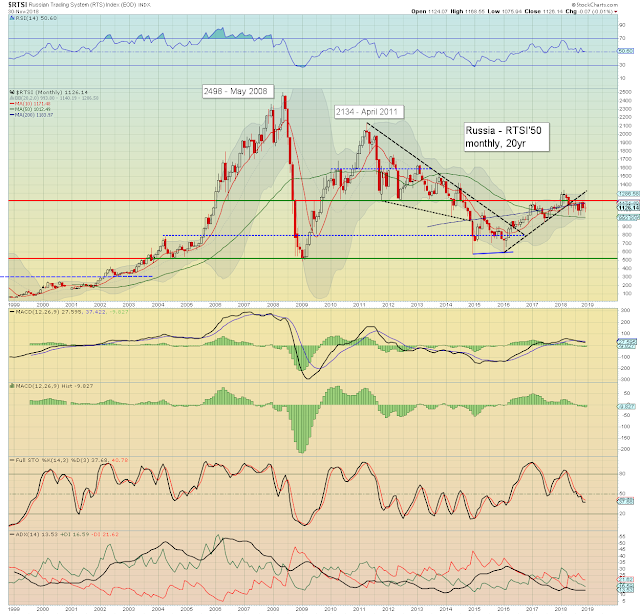 The Russian market remains broadly stuck, and settled November effectively u/c at 1126. Things only turn bullish with a break and hold above the 1200 threshold, which would then offer basic target of 1500. A rebound in energy prices would really help the Russian economy/market. 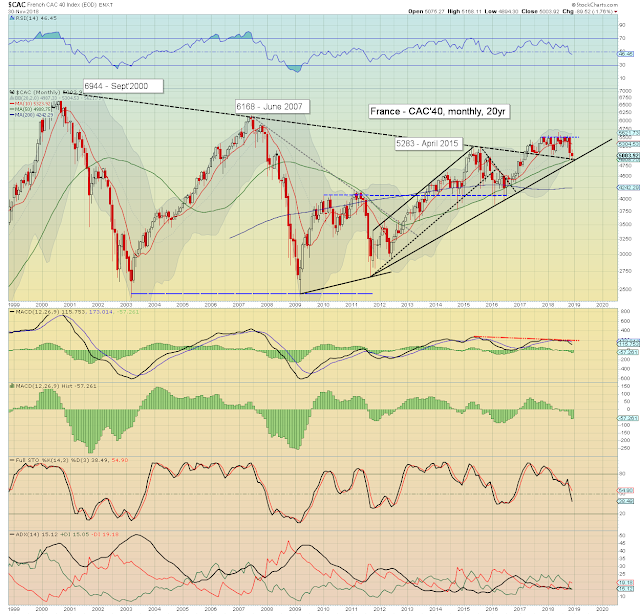 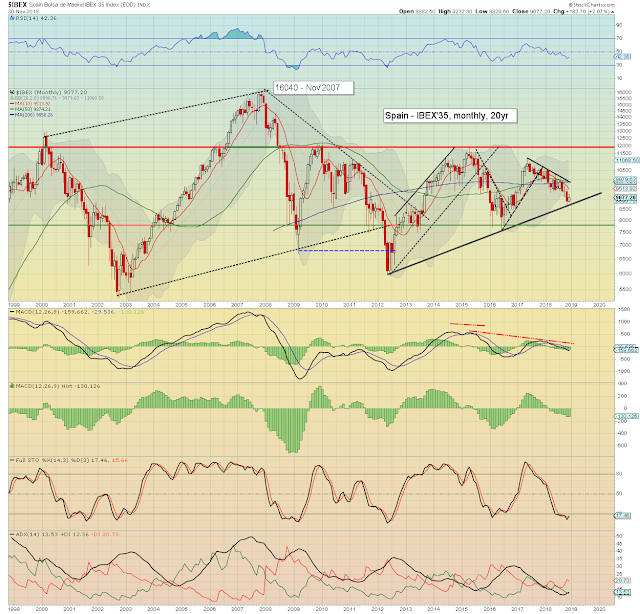 Spanish equities were surprisingly strong, settling +2.1% to 9077. Note the l/t support/trend, which was tested in October. Things would turn bullish with a monthly close above the 10MA, which will be in the 9400s into year end. 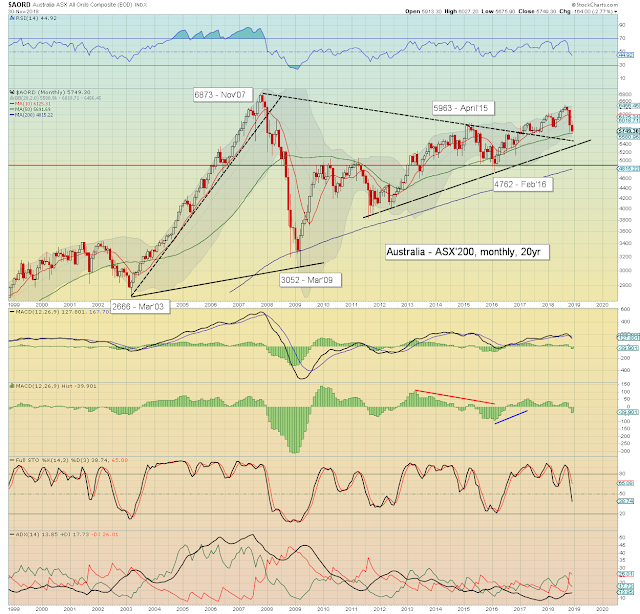 The Australian market was the laggard, lower for a third consecutive month, settling -2.8% to 5749. There really isn't any solid support until the 5500/400 zone. A rebound in commodity prices would really help this market. 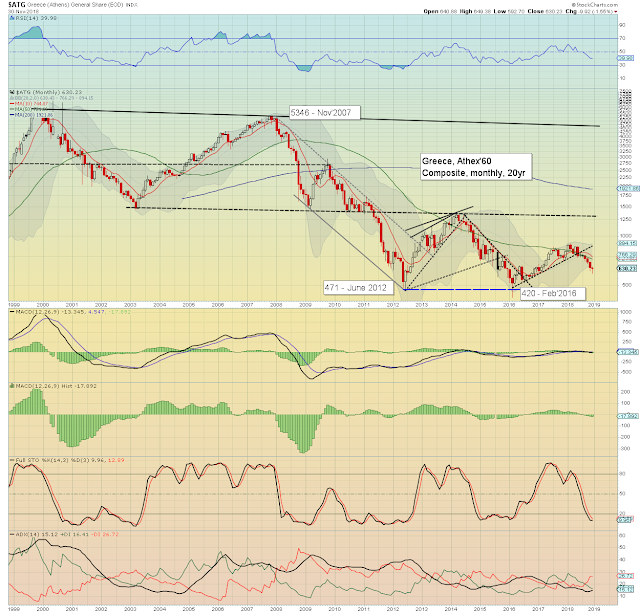 The Greek market fell for a fourth consecutive month, settling -1.6% to 630, the lowest close since Jan'2017. This remains a grade 'A' example of an economic/societal basket case, which remains on life support, as maintained by the infamous troika.
--

Brazil is leading the way upward, breaking a new historic high, whilst the Australian market was the laggard.

As a collective, world equities are very mixed. It is the case that many markets still haven't recovered to 2000/2007 levels. The US economy/market is still the strongest in the world. The key German economy/market is broken, which has bearish implications for the rest of the EU into/across 2019.

No doubt, the central banks  - inc' the US fed, would cut rates and spool up the printers, if they see high probability of a global recession.
--

It will be a shortened four day trading week, with just 18.5 trading days left of the year.

The market will clearly be swayed by how the G20 concludes on Saturday. Those expecting some kind of positive US/China trade announcement will likely be disappointed.

--
W - CLOSED, in observance for the national day of mourning for George H. W Bush

Most, if not all of the following data announcements will be shifted to Thursday: ADP jobs, product/costs, PMI/ISM serv', EIA Pet' report, Fed Beige book (2pm)

Fed chair Powell was due to speak to the House, and that will also now be shifted to Thursday, if not further out.
--

For details and latest offers: permabeardoomster.com

*the next post on this page will likely appear by 5pm EST on Monday.
Posted by Trading Sunset at 17:00:00
Email ThisBlogThis!Share to TwitterShare to FacebookShare to Pinterest
Newer Posts Older Posts Home
Subscribe to: Posts (Atom)