With equities seeing some minor chop after the latest FOMC minutes, the VIX remained broadly subdued, settling +0.2% @ 12.88 (intra high 13.27). Near term outlook is for continued broad equity inside into the next FOMC of June 17th, which should equate to VIX remaining within the 15/11 zone. 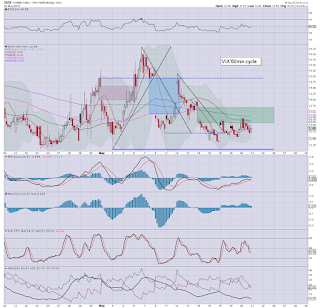 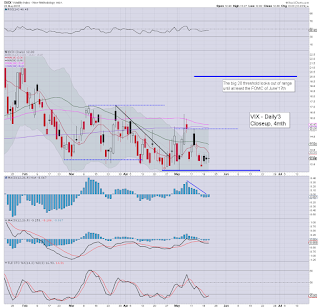 *a third consecutive black-fail candle... it does not bode well for those equity bears seeking significant downside in the near term. Indeed, it is indicative that every little equity down wave is being negated very quickly.
--

VIX remains broadly subdued, as the equity market continues to periodically break new historic highs in at least some indexes.

The big 20 threshold looks out of range until at least mid June.
-- 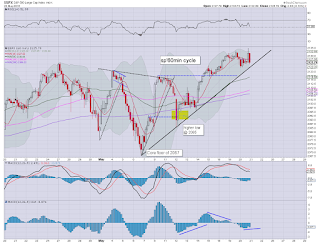 Certainly, with the sp'500 breaking a new historic high, there is little for the equity bears to be pleased about.

Transports remains very weak of course, but then one index does not maketh the market.
-- 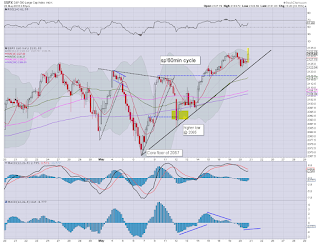 *the Dow came within 1pt of yesterdays new high
--

So.. its turned out to be just another day in favour of the bull maniacs.

re: FOMC minutes. It would seem June is broadly out for a rate hike, but given a few more months.. the FOMC of Sept 17th looks a prime opportunity for the first rate move. 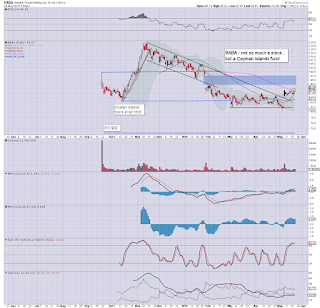 US equities remain seeing minor chop, with a touch of weakness. The smaller 15/60min equity cycles favour the bulls into the close. VIX is offering a brief jump to the upper gap zone of 13.75 though. USD remains higher for a third day, +0.3% in the DXY 95.50s. 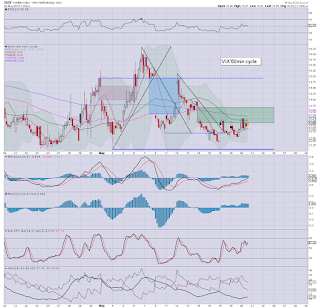 Its a little mixed right now. Equities look broadly okay.. the only hope for the bears is the VIX, which on balance will climb into the close. 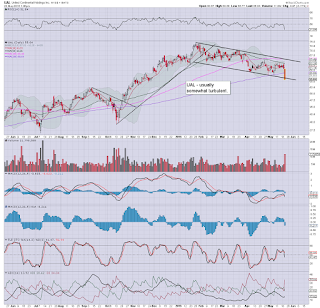 1pm update - chop ahead of the Fed

The broader equity market remains in minor chop mode, ahead of the latest FOMC minutes (due 2pm). Hourly equity cycles remain negative, but will offer renewed upside into tomorrow. The USD continues to climb, +0.4% in the DXY 95.60s. Metals remain flat.. and look vulnerable for the remainder of the week. 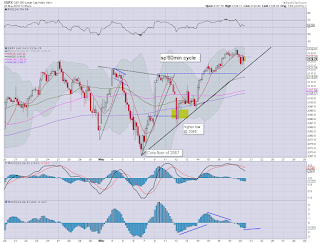 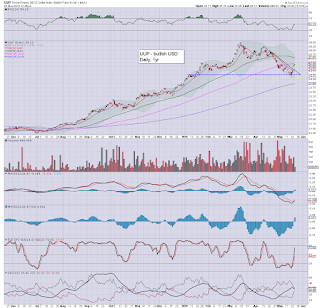 Little to add.... as the market remains in chop mode.

notable weakness, TWTR -2.4%... nothing good about the near term outlook

--
time for lunch.. back for the Fed press release
Posted by Trading Sunset at 17:52:00
Email ThisBlogThis!Share to TwitterShare to FacebookShare to Pinterest

Whilst the broader market remains in chop mode (ahead of the FOMC minutes), there is some distinct carnage in the Transports, -1.9% , so far hitting an intra low of 8508. The widening discrepancy between the 'old leader' and the broader market is something most should be carefully watching. 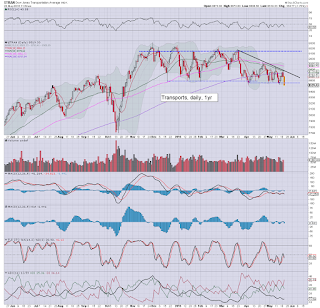 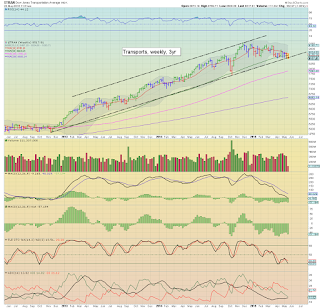 *we have a clear break of the broader upward trend, that stretches all the way back to late 2012.
--

So, what to make of this? The 'old leader' is not to be dismissed lightly. Although as some realise, whilst the Trans churned sideways across 2012, the broader market climbed.

12.21pm.. Someone is hitting the sell button TWTR, -2.0%... daily chart is largely flat lining though... likely dead money into Q2 earnings.
Posted by Trading Sunset at 16:54:00
Email ThisBlogThis!Share to TwitterShare to FacebookShare to Pinterest

11am update - Transports battling to floor

Whilst the broader market is seeing minor chop, the Transports continues to struggle, with an early sig' decline of around -1.3% @ 8555. The smaller 15min cycle is offering the first sign of a turn... but still, it remains a very borderline situation, and the equity bulls should be at least moderately concerned. 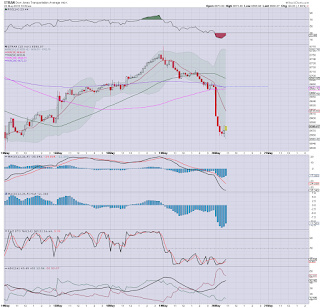 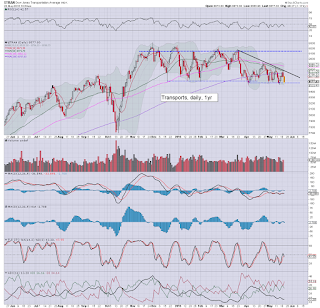 Despite many months.. it is notable that the equity bears have had to battle extremely hard just to keep the transports trading largely sideways.

Best guess... Trans to resume UPWARD.. with a key break over declining resistance, currently around 8775.
-

**Oil inventories saw a net decline of -2.7 million barrels... for now... it certainly favours another wave higher into the WTIC 65/67 zone.. and that certainly won't help the transports! 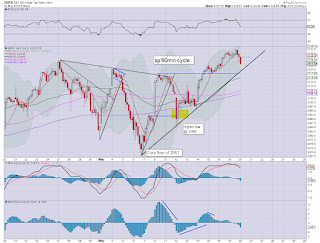 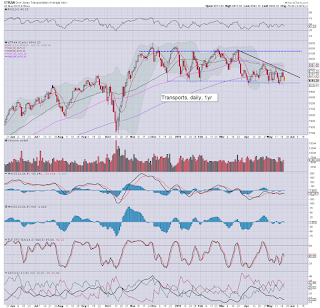 A pretty quiet open... we should see some more dynamic action this afternoon with the FOMC minutes (2pm).

notable weakness, airlines, DAL/UAL, both lower by a very sig -4.5%

Huge sell side vol' in the airlines...  UAL -5.2%.... getting ugly
Posted by Trading Sunset at 14:50:00
Email ThisBlogThis!Share to TwitterShare to FacebookShare to Pinterest 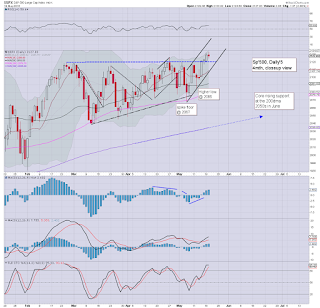 So we're set for a quiet open. Not much is due today... just oil inventory data and the FOMC minutes. By the afternoon, hourly equity cycle will be prone to swinging upward again.
- 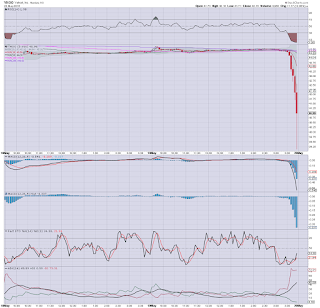 A real train wreck of a stock... one I have never traded.. nor would. Although I will keep an eye on YHOO today, if only for entertainment purposes.

--
Update from a returning Oscar

Not surprisingly, Mr C is looking for a holiday reversal, I suppose a brief drop of 1-2% is possible before another swing higher into mid June. In any case.. its minor noise, whilst the broader trend remains intact.
-

Some truly kooky chatter, as ever, make of that... what you will.
--

Good wishes for Wednesday
Posted by Trading Sunset at 13:19:00
Email ThisBlogThis!Share to TwitterShare to FacebookShare to Pinterest

Rallying USD a problem for commodities 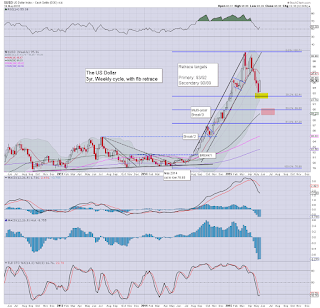 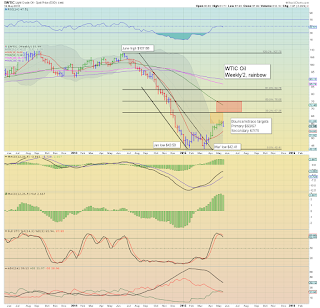 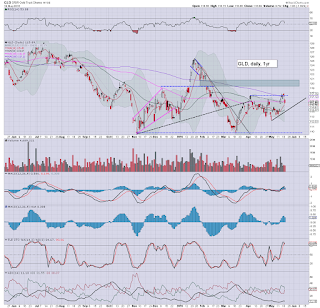 To be clear, last week did not feel like a key floor/turn in the USD. My best guess is for renewed weakness after what will probably be a 1-2 week bounce. A key floor in the DXY 90/89s looks due.. before a hyper-ramp to the 120s.

As for Oil... it remains a tricky commodity to project an outlook, but if the USD makes a lower low in June/July, then WTIC has a fair chance of renewed strength to the mid/upper $60s. I do not expect sustained action in the $70s this year.

Finally.. the precious metals..which still look set to break new multi-year lows. Key support for Gold is $1130, which equates to GLD in the 109s. Broader target remains Gold $1000, with Silver 12/10.

*I remain short Gold - via GLD, am seeking an exit in the 113s before this weekend.

Wednesday will see the latest EIA oil report, but far more importantly.. the FOMC minutes (due 2pm). The algo-bots will no doubt be very prone to snapping the market one way or the other.

*Best guess... the broader upside continues into the sp'2140/50s before end month. By the FOMC of June 17th, the sp'500 could be trading in the 2170s.. which would also be an important hit of the upper bollinger on the giant monthly cycle.
--

Since the market broke and held the sp'1500s in summer 2013, I've been resigned to broad upside.. rather than the original deflationary target of sp'500/Dow 5K or so.

One of my Youtube subscriptions - Mr H, posted the following today. It is provoking, and will no doubt annoy many of the more resistant uber-doomers...

Dow 54k is indeed a viable scenario.. even across just a couple more years. Armstrong (whom most of you will know I often agree with), is similarly open to a hyper-bullish scenario of Dow 40K in 2017.

As ever, things can always change (not least if War or natural disaster), but with low/negative rates, continuing QE from central banks across the world, there really is only one place for most of the money to go... the global equity market.

*it was nice to hear from a few of you today, whether via Disque/email/messenger. Things can be a little quiet sometimes, as this crazy market has driven so many good people away.

Goodnight from a chilly London city
Posted by Trading Sunset at 04:00:00
Email ThisBlogThis!Share to TwitterShare to FacebookShare to Pinterest 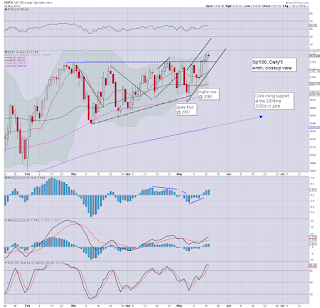 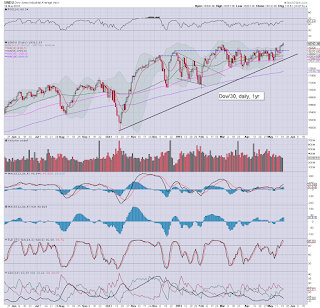 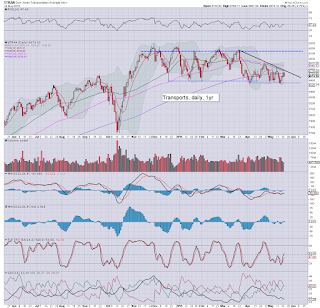 So, the broader market is still periodically breaking new historic highs. The laggard remains the Transports, which was especially notably today considering the significant net daily decline in WTIC Oil of -3.9% @ $57.99.