It was a very mixed month for world equity markets, with net monthly changes ranging from +5.3% (Japan), +0.9% (USA), to -6.2% (Brazil). There remains opportunity for another wave higher this June/July, but an intermediate correction remains an increasingly likely outcome. 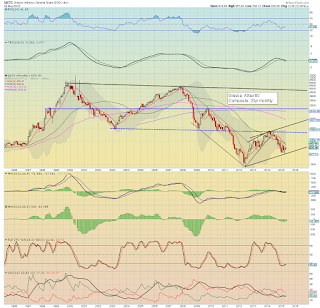 The Greek market traded in a rather narrow range across May, settling net higher by just 0.3% @ 825, the second consecutive net monthly gain. First resistance is the 10MA (895.. and falling).

The issue of Greece is a major concern to many, but then, it has been that way since spring 2010. A GREXIT looks increasingly probable, the can kicking is surely going to come to an abrupt halt at some point this summer.

The only issue is what exactly will the Greek leadership decide?  A partial debt default of some degree seems likely, but the bigger issue is whether Greece would abandon the Euro and switch back to the Drachma. What should be clear to most, the 'smart money' has already exited the Greek banking system, whether to end up under the bed, to be spent in the economy, or wired into a foreign account.

As for how the Athex might react to any kind of GREXIT... some initial weakness would seem highly probable. However, a major devaluation would eventually result in attracting new foreign capital, and given a few years, would be a major positive for the Greek economy. 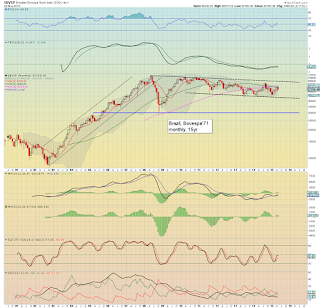 The Brazilian market saw a rather severe net monthly decline of -6.2% @ 52760, although the Bovespa did manage a higher high... along with a higher low. There is clear resistance around 59K, with key support at the 50K threshold. Broadly, the market has been stuck for five years, having been held back as commodities have broadly cooled since spring 2011. 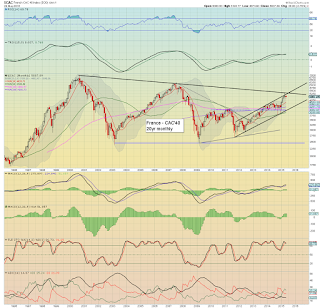 The French market saw the first net monthly decline of the year, but only lower by a moderate -0.8%. Despite the decline, it was still a monthly close in the 5000s. There is huge resistance in the 5200s, and the June 2007 high of 6168 looks out of range for some months. In terms of 'best case downside', there will be core support in the 4500/4250 zone into the early autumn. 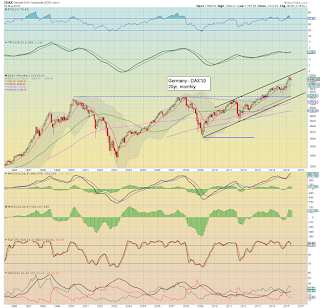 The economic powerhouse of the EU - Germany, saw a minor decline of -0.3% @ 11413. First support is the giant psy' level of 10K. Even if most world markets are spooked later this summer/autumn, a monthly close <9K looks extremely unlikely. 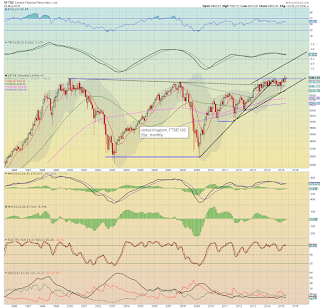 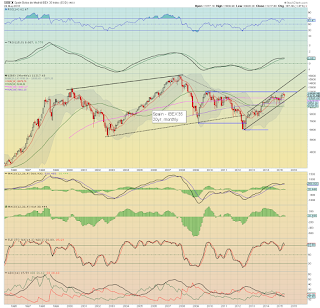 The ugliest and most problematic of the EU PIIGS (due to its size) - Spain, saw a net monthly decline of a somewhat significant -1.5% @ 11217. The 12K threshold remains stiff resistance, but looks set to be broken, regardless of any initial weakness this summer. A break above 12K will open the door to challenge the Nov' 2007 high of 16040. A hyper-bullish target for 2017 would be the psy' level of 20K. 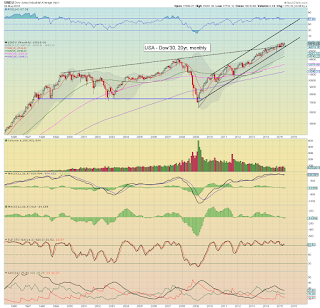 The mighty Dow gained 170pts (0.9%), having attained a new historic high of 18351. Upper monthly bollinger is offering renewed upside to around 18500 in June/July. In terms of downside, it will be very hard for the bears to break much below 16K. A year end close >20K remains very viable. 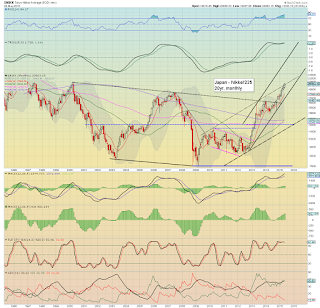 The BoJ fueled Nikkei climbed for the fifth consecutive month, with a net gain of 1043pts (5.3%) @ 20563. The Japanese market looks vulnerable to a brief washout down to the 17/16k zone at some point this summer/autumn. However, with continuing QE from the BoJ (and other central banks), the Nikkei looks set to climb broadly higher across the next few years. 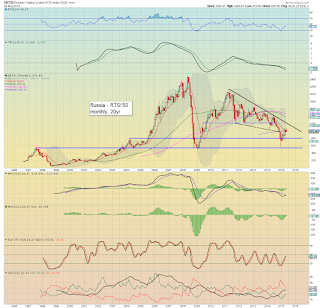 Much like the Brazilian market, Russia saw a significant net monthly decline, -5.3% @ 976. Also similar to the Bovespa, despite the decline, there was a higher high... and a higher low. There are multiple aspects of resistance in the 1000/1200 zone. All indicators remain bearish, with viable downside to the 800/700s - if other world markets see a sig' correction at some point this year.

A monthly close in the 1200s would bode for much higher levels in 2016. First target would be the 1500/1600 zone... and then the big 2K level. Certainly, 2K looks well out of range this year, as energy prices look close to maxing out. 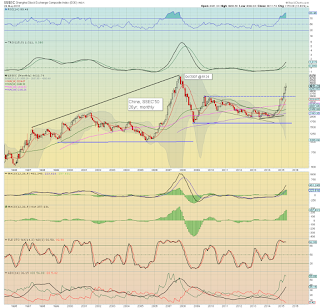 The China market remains in hyper-bullish mode, with a net monthly gain of 3.8% @ 4611, having hit 4986 just a few days previously. Volatility is starting to increase again, as the market is challenging the psy' level of 5K. If 5K is not broken above in June/July.. natural downside would be a retrace to the breakout zone in the 3400s.. which is a long way down. Broader hyper-upside to 8-10K looks viable within the next two years.

It was a bit of a mixed month for world equity markets. We're still seeing some powerful strength in Asia, but some of the EU markets are clearly getting stuck at resistance.

Most markets are long due a significant correction, and all have viable downside of 10% or so. Yet... the next wave lower will likely disappoint most equity bears.. and the declines will be swiftly reversed. Right now, even a correction on the scale of Oct'2014 (sp'500 -9.8%) looks a bold target.

In terms of the Dow, the following remains a primary scenario. 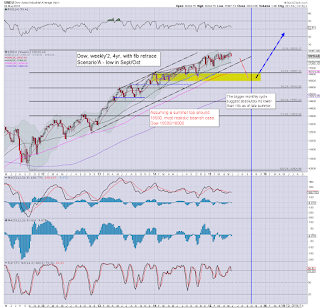 Considering the ongoing QE from various central banks and low rates, equities remain the only viable place for most money to go. At best this summer, the Dow might fall to 16K.

I do not believe we'll see a grand multi-year top of this ramp from 2009 for another two years. That will likely apply to most world equity markets.. although not all.

The most bullish markets across the next two years:  China, Germany, USA

A pretty busy week is ahead, not least with the monthly jobs data, and a key OPEC meeting.

*there are a sprinkling of fed officials next week, with Bullard on Wed' and Dudley on Fri'
-

Back at the Monday open :)
Posted by Permabear Doomster at 17:00:00
Email ThisBlogThis!Share to TwitterShare to FacebookShare to Pinterest


Lets take a look at a few bits and pieces to wrap up May... 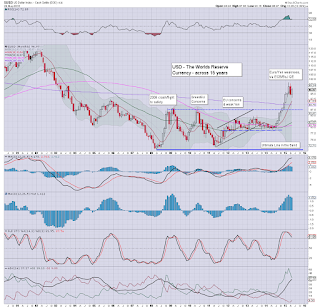 A rather significant net monthly gain of 2.4%, having swung from the DXY 93s to upper 97s. Underlying MACD (blue bar histogram) remains on the high side, and there remains threat of another month or two of cooling, before breaking new highs >100.7.

Broadly... the DXY 120s look a given, the only issue is whether that is possible late this year.. or not until 2016. Very difficult to say... except that the broader trend is unquestionably bullish. 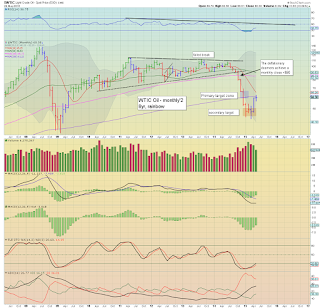 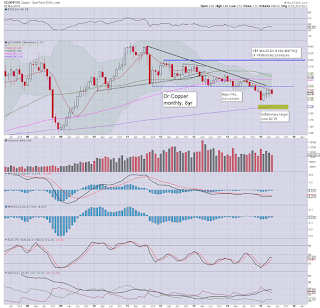 The multi-month up wave has concluded, with Copper seeing a net monthly decline of -5.3% @ $2.73. The low $2s look due in the coming months. If correct, that would bode bearish for Gold/Silver.. along with the related mining stocks. 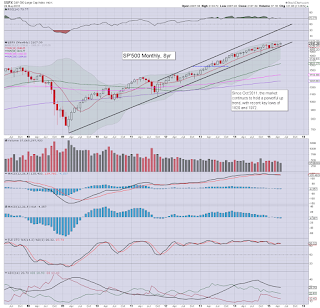 A net monthly gain of 21pts (1.0%), having hit a new historic high of 2134. Underlying MACD (blue bar histogram) remains negative cycle, as momentum slowly swings back to the bears. The upper monthly bollinger is offering the 2170s in June... the 2200s look out of range until July. 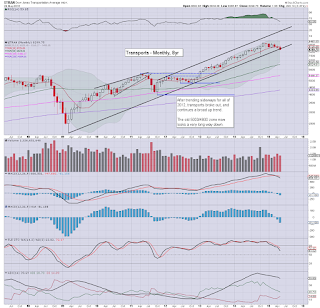 The 'old leader' saw the third consecutive net monthly decline, settling -3.4% @ 8299.. a full 1000pts below the Nov'2014 high of 9310. Underlying MACD cycle is now significantly negative, and bodes for further weakness this summer. Best case downside for the equity bears would be the lower monthly bollinger, which will be around 7K across the summer. The giant psy' level of 10K now looks out of range for many months.
-


Farewell to May... looking outward... across the summer

It has been an interesting month, but I do expect increasingly dynamic price action across the summer/early autumn. There clearly remains a high threat of a GREXIT, and on any basis, that would surely give the market an excuse to sell lower... if only briefly.

Thanks to all those who said hello this month... it makes all the difference!

--
Goodnight from London
-
*the weekend post will be on the World monthly indexes
Posted by Permabear Doomster at 04:00:00
Email ThisBlogThis!Share to TwitterShare to FacebookShare to Pinterest 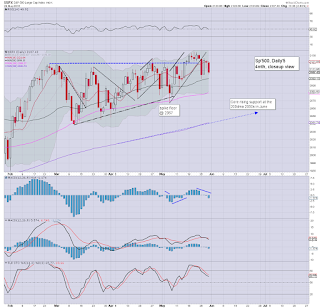 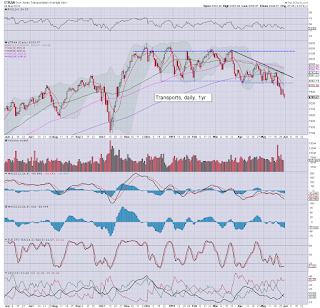 Not much to add. Price action for the broader market was a little choppy this week, with an low on Tuesday of sp'2099. Certainly, the Friday close was bearish, and does offer a fairly high probability of further downside in the first half of next week.

However, with the 200dma now at sp'2041, the equity bears face huge support in the 2040/00 zone. Sustained action under the giant 2K threshold looks out of range for at least another month or two.