With equities closing moderately higher, the VIX naturally opened lower, closing -2.1% @ 11.82. Near term outlook is for the VIX to further melt into the 10s, and probably the 9s if sp'2000s. 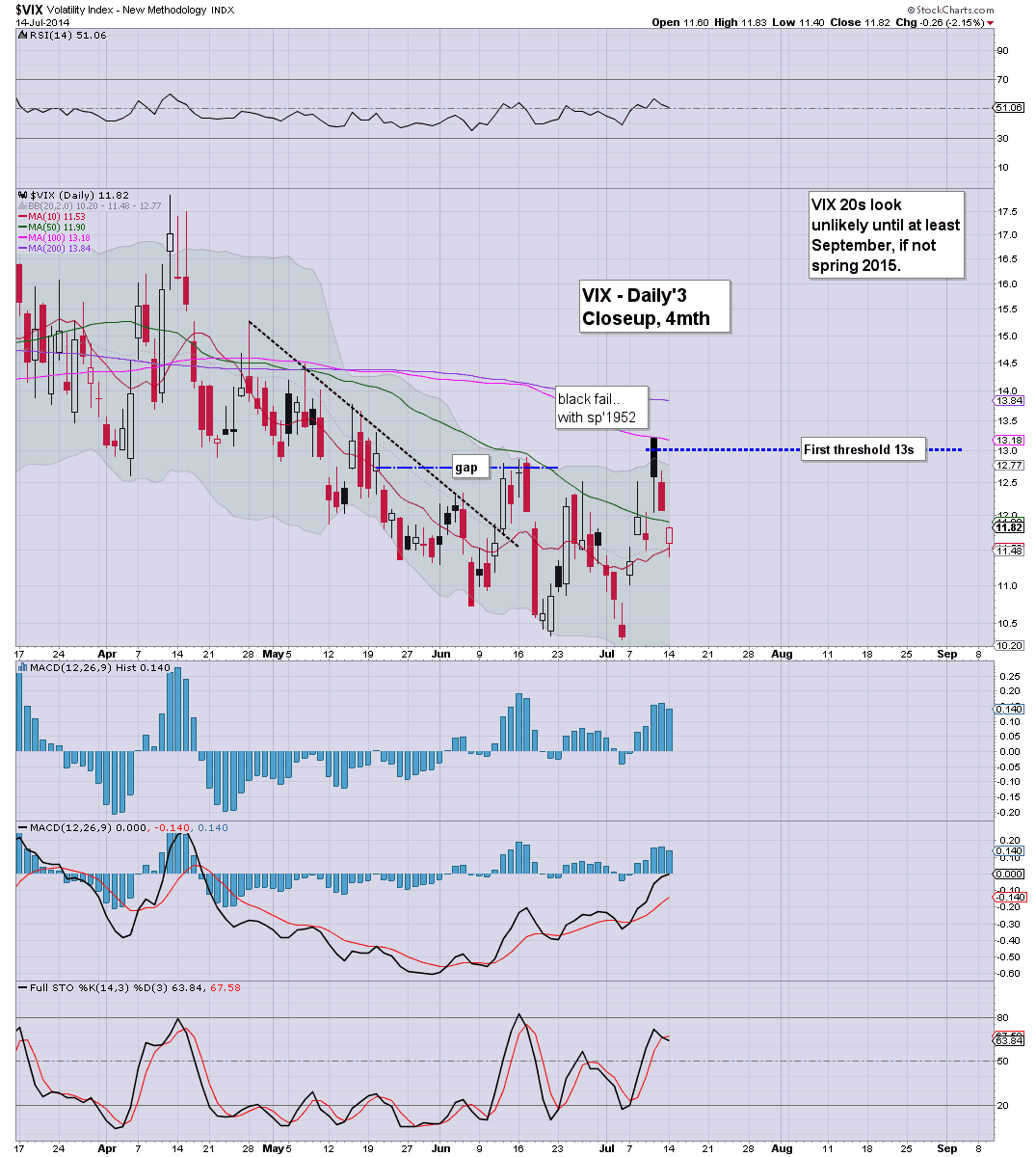 *today's closing candle was a reversal (hollow red), but with equity price action as it is, I am somewhat dismissive of it.
--

So, the second consecutive net daily decline for the VIX.

Last Thursdays black-fail candle remains a key 'spike' /turn, and the VIX could easily melt lower for the rest of this week.
--

US equities closed moderately higher, with new historic highs for the Dow and Trans. The sp'500 settled +9pts @ 1977, with the two leaders - Trans/R2K, closing higher by 0.7% and 0.5% respectively. Near term outlook is bullish. 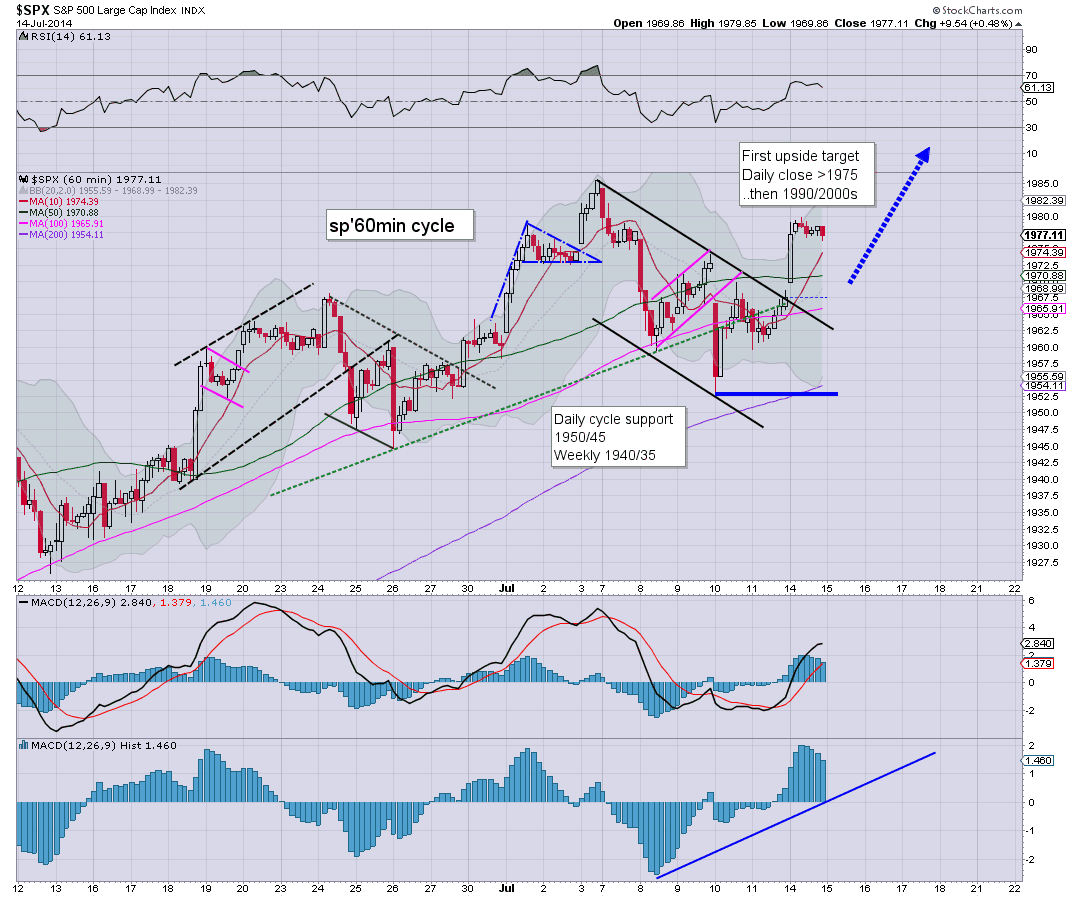 *price structure is a baby bull flag on the hourly, and the sp'1985/90 zone is viable tomorrow..or Wednesday, when the Yellen will be talking.
--

There really isn't much to add.. on what was just another bullish day in market land.
--

more later.. on the VIX
Posted by Trading Sunset at 21:05:00
Email ThisBlogThis!Share to TwitterShare to FacebookShare to Pinterest

US equities are set to close with moderate gains, sp'500 will likely settle in the 1975/80 zone, a mere 0.3% away from breaking a new high - following the lead in the Dow/Trans. VIX is set to melt lower into the close. 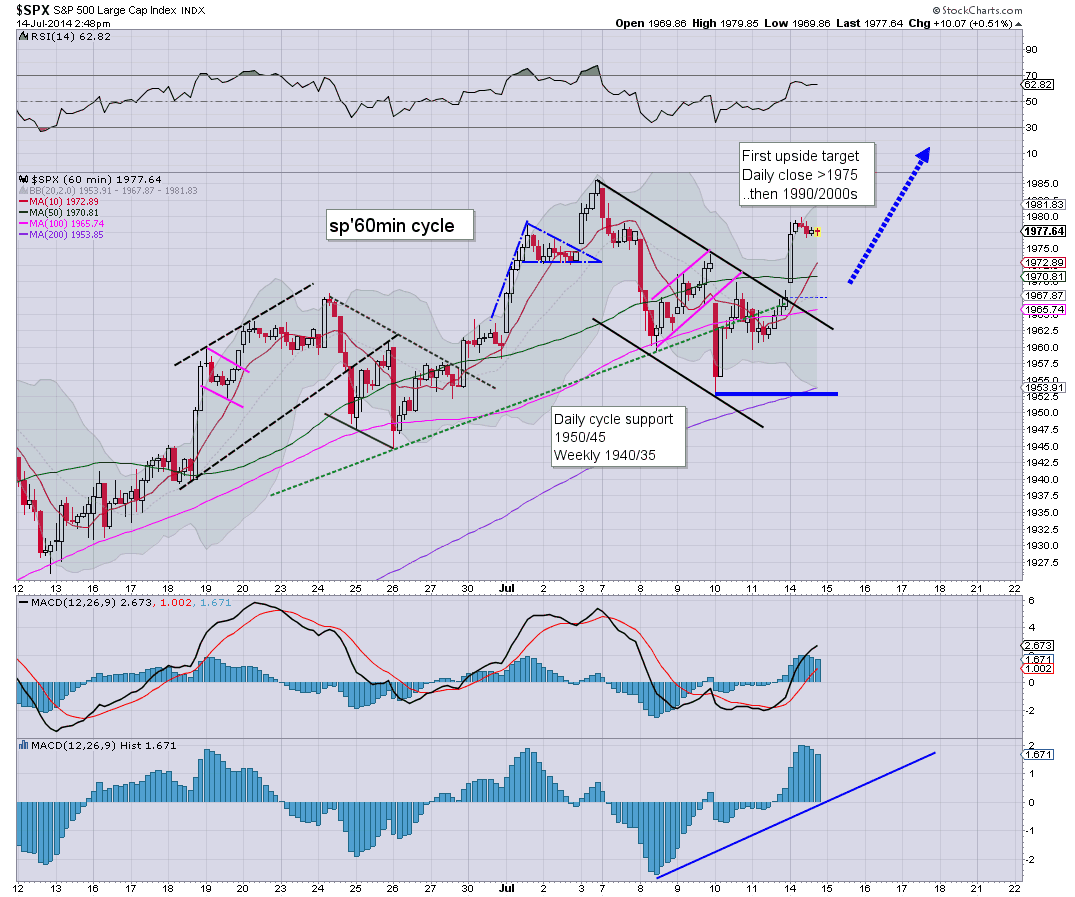 *price structure is a viable baby bull flag on the hourly chart. Certainly, the 1985/90 zone is possible tomorrow if Yellen pleases the market.
--

For the equity bears, a lousy start to the week, but there can be no excuses, whilst the primary trend on the bigger weekly/monthly cycles remains 100% bullish.

Indeed, there is viable upside to sp'2050/75 by early September, which would easily offer the big fib' level target of the 2130s early next year.
--

There are a LOT of key individual stock movers to highlight today... and I'll be specifically looking at DRYS after the close...

All look set for higher levels.
--

back at the close
Posted by Trading Sunset at 19:50:00
Email ThisBlogThis!Share to TwitterShare to FacebookShare to Pinterest

Equities are seeing minor chop, with the sp' set to close in the 1975/80 zone...a mere 0.3% or so from breaking a new high. Regardless, with new highs in the Dow/Trans, the broader market looks set for continued upside across this summer. 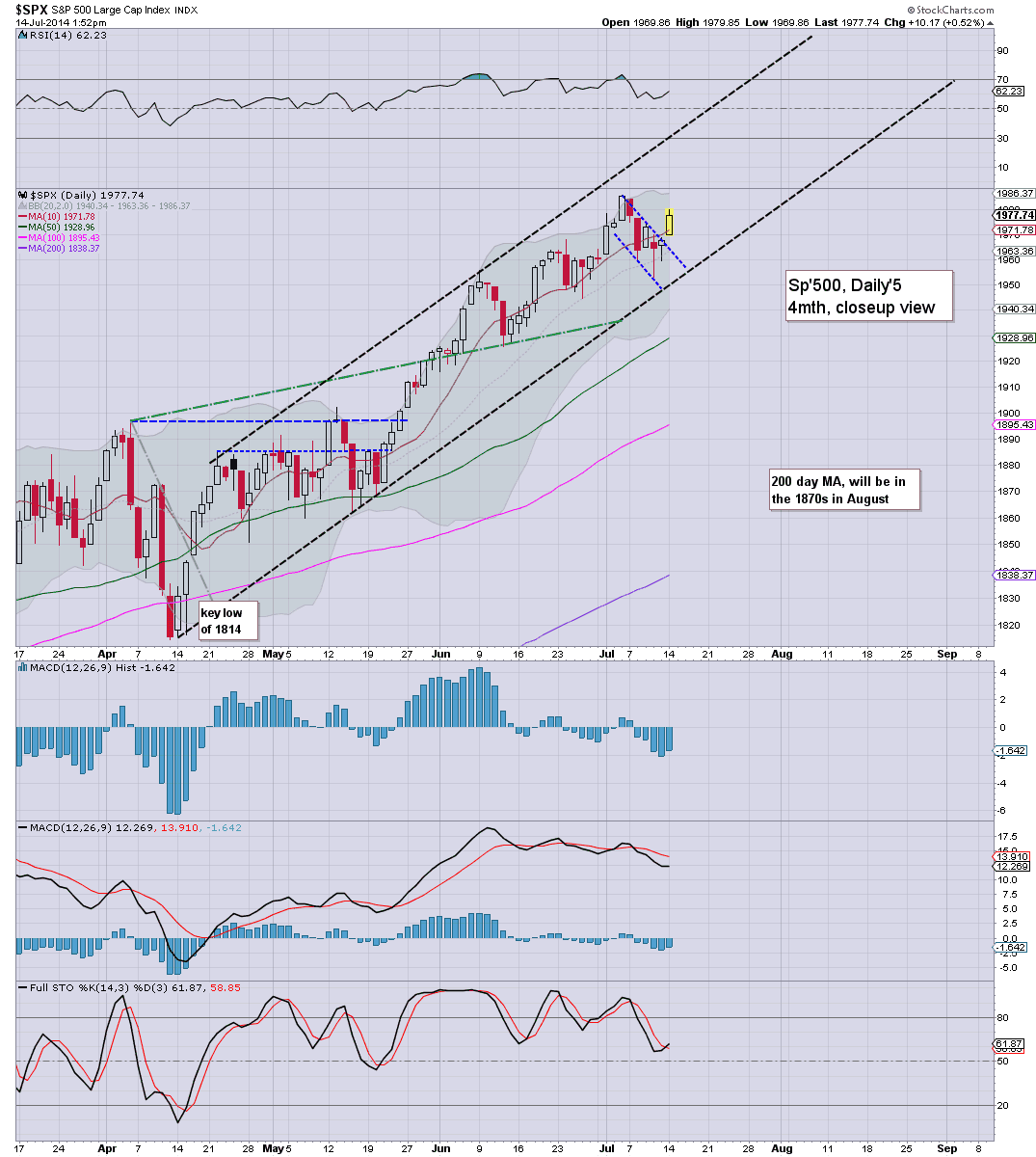 Daily charts are currently restrictive to the mid 1980s, but by end of this week..and certainly next week.. the 1990s will be viable.

It is notable that the weekly cycles are now offering the 2000s for the first time.
--

Mr Market is merely flat lining ahead of the Yellen tomorrow morning.

stay tuned
Posted by Trading Sunset at 18:52:00
Email ThisBlogThis!Share to TwitterShare to FacebookShare to Pinterest

1pm update - Dow is stuck.. for a little

US equities are holding moderate gains, but the daily cycles are somewhat restrictive. Dow looks set to remain within the 16900/17300 zone for the rest of the month. Price action remains strong, with a VIX that reflects a fearless market, -3% in the 11.70s. 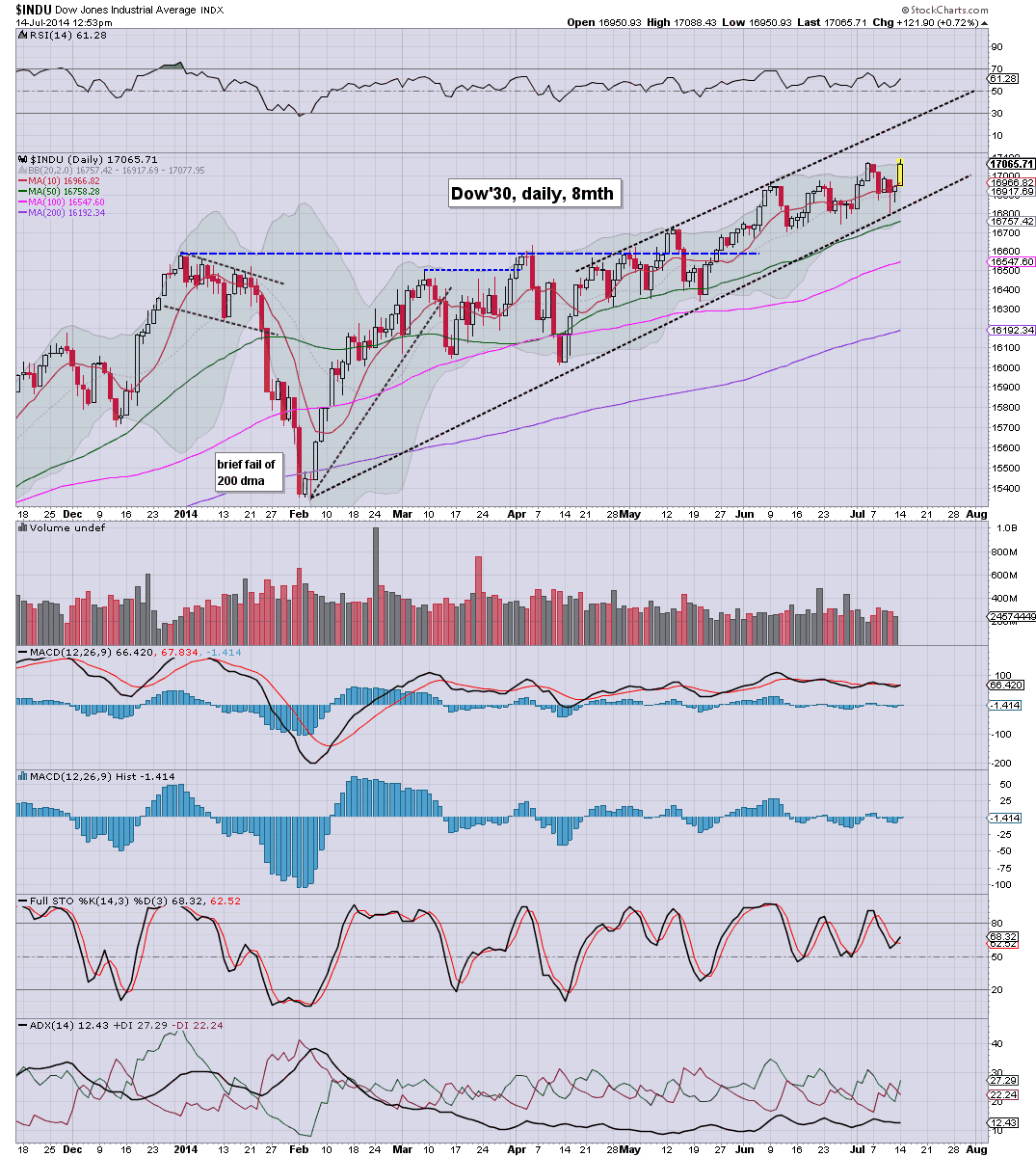 Little else to add...

back at 2pm
Posted by Trading Sunset at 17:58:00
Email ThisBlogThis!Share to TwitterShare to FacebookShare to Pinterest

US indexes are looking pretty strong - ahead of the Tue/Wed' appearance of Yellen. With the Dow/Trans breaking new historic highs, and the sp'500 not far behind, there is nothing bearish in the immediate term. VIX is being re-crushed, -4% in the mid 11s. 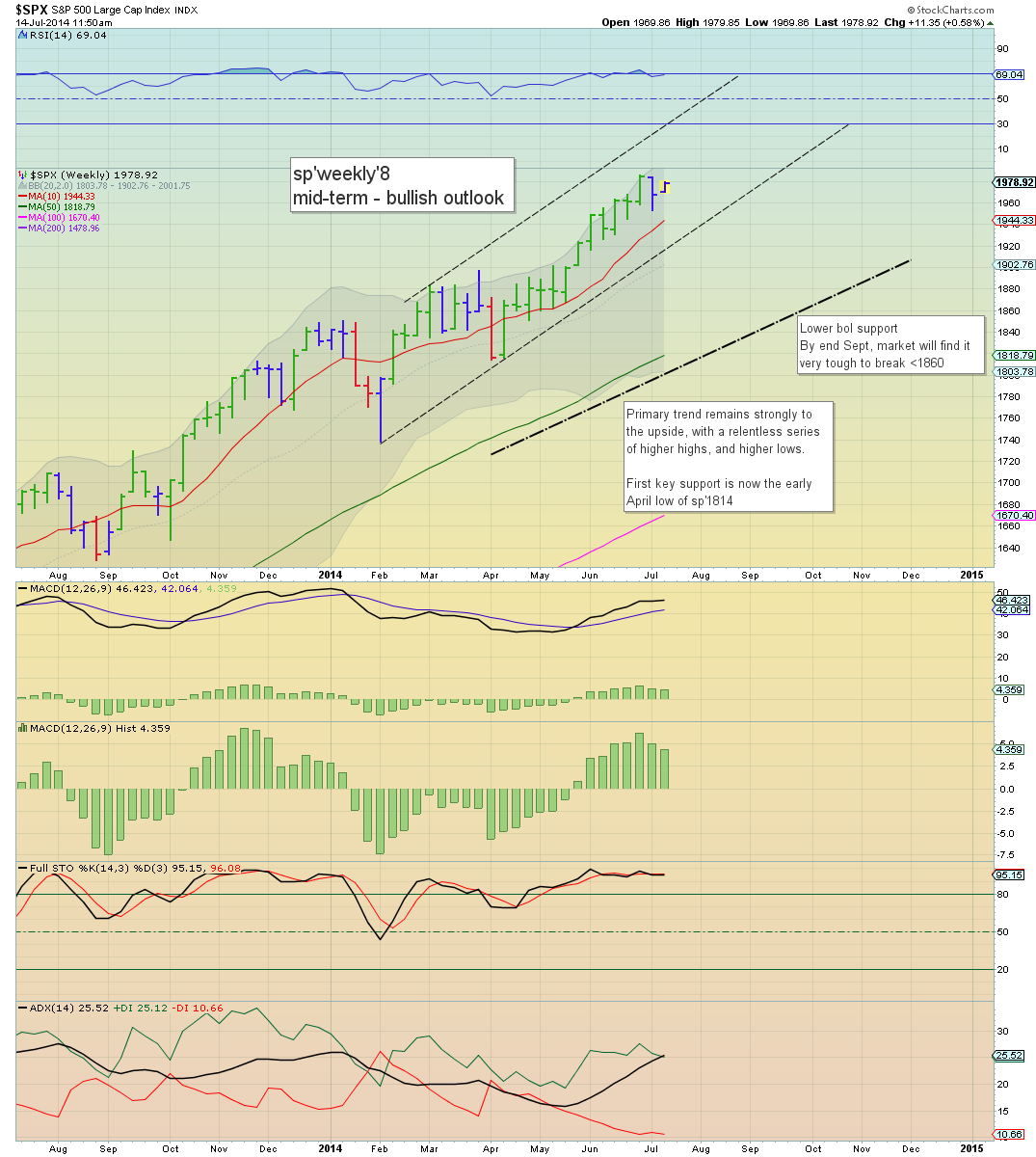 Ignoring the minor noise... with a weekly chart.
--

Yes, we have a second blue candle, but we are holding above all key minor lows, and price action is 100% bullish.

--
time to check on the cheer leaders on clown finance TV.. although I realise some might be starting to group me into that category lately.
Posted by Trading Sunset at 16:52:00
Email ThisBlogThis!Share to TwitterShare to FacebookShare to Pinterest

US equities are slowly building upon opening gains, with the sp'500 a mere 0.3% from breaking a new high. We already have new historic highs in the Dow/Trans, and so long as Yellen doesn't say anything stupid across Tue/Wednesday, the 1990s are viable. 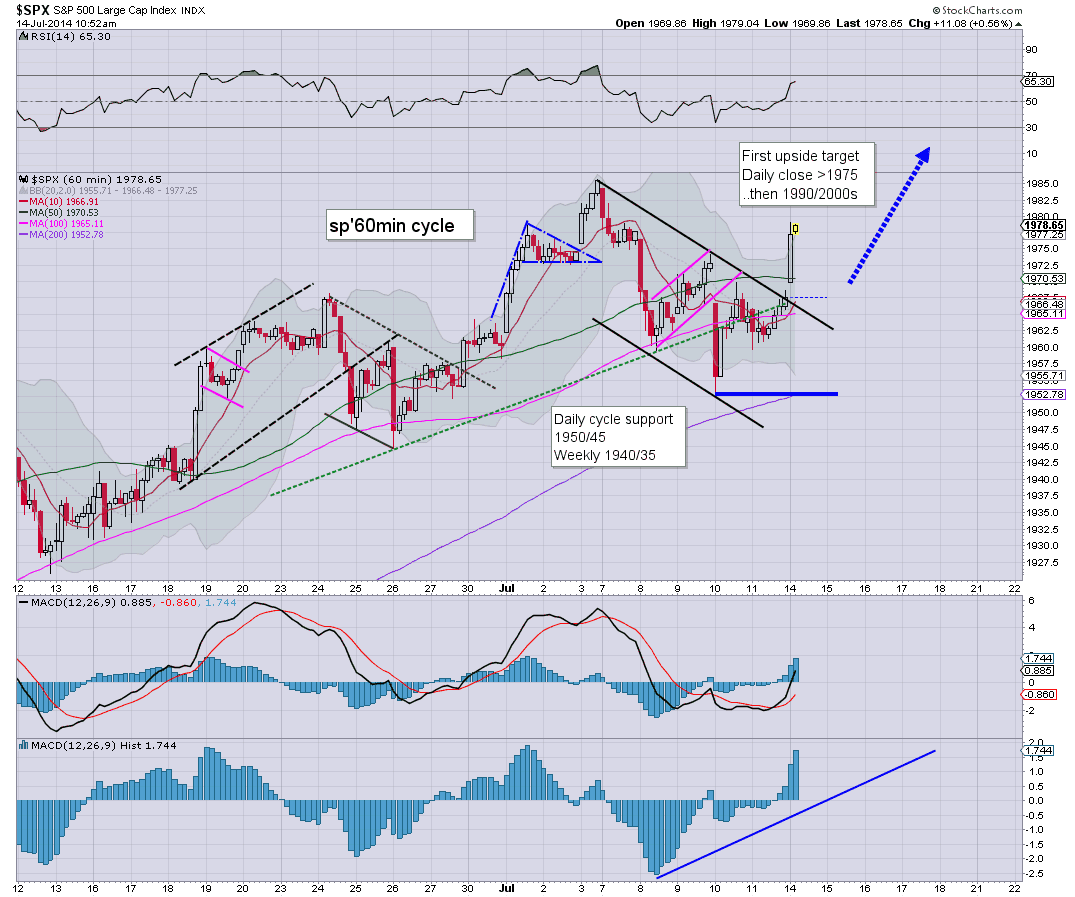 *yes, the R2K slipped lower..but even that is rebounding now.

There is ZERO reason why this market won't be pushing higher across this week.
-

Notable strength in all the momo stocks, with FB +2.3%
Posted by Trading Sunset at 15:55:00
Email ThisBlogThis!Share to TwitterShare to FacebookShare to Pinterest

US equities open moderately higher, with the sp'500 due to battle higher into the 1980s. Most notable already today, a new historic high for the Dow and the Transports. Meanwhile, precious metals are seeing major falls, Gold -$31, Silver -2.4% 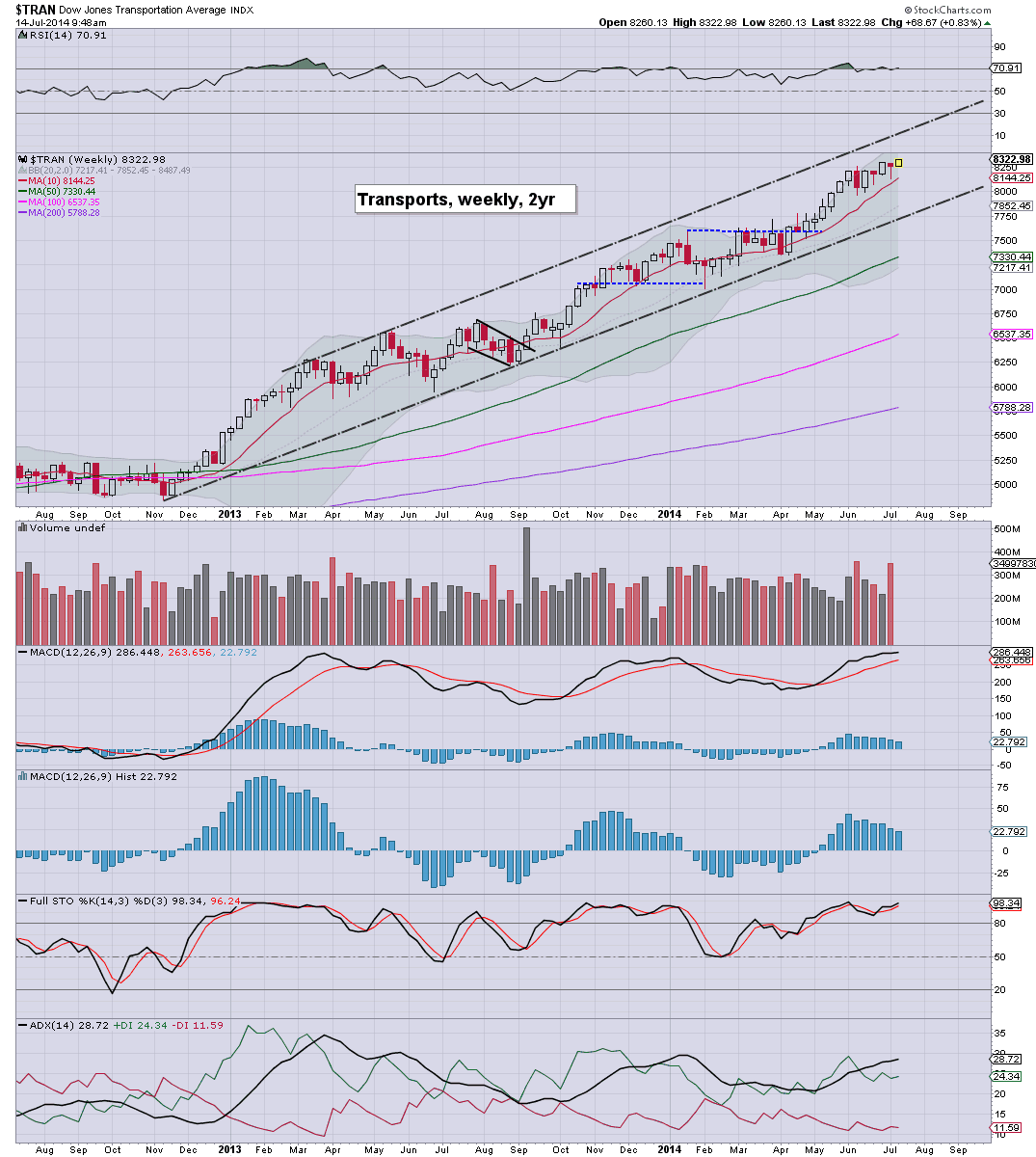 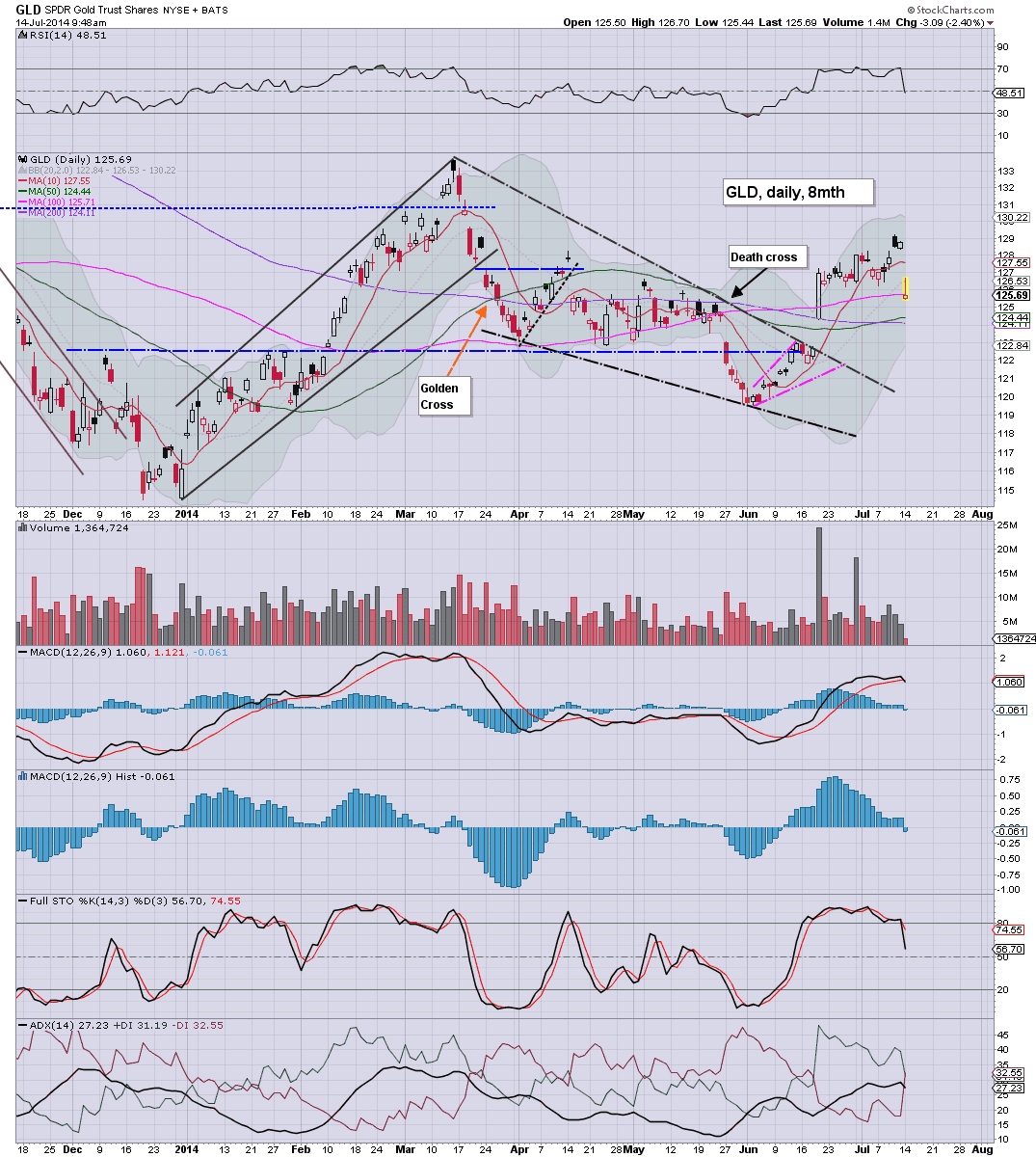 There seems little doubt the rest of the market will follow... whether this week, or next.... it really makes no difference.


10.27am.. Yes, the R2K had an opening black candle on the hourly, but still...with new historic highs...I am dismissing it.

R2K could even turn briefly red...last weeks lows should easily hold though.
Posted by Trading Sunset at 14:51:00
Email ThisBlogThis!Share to TwitterShare to FacebookShare to Pinterest 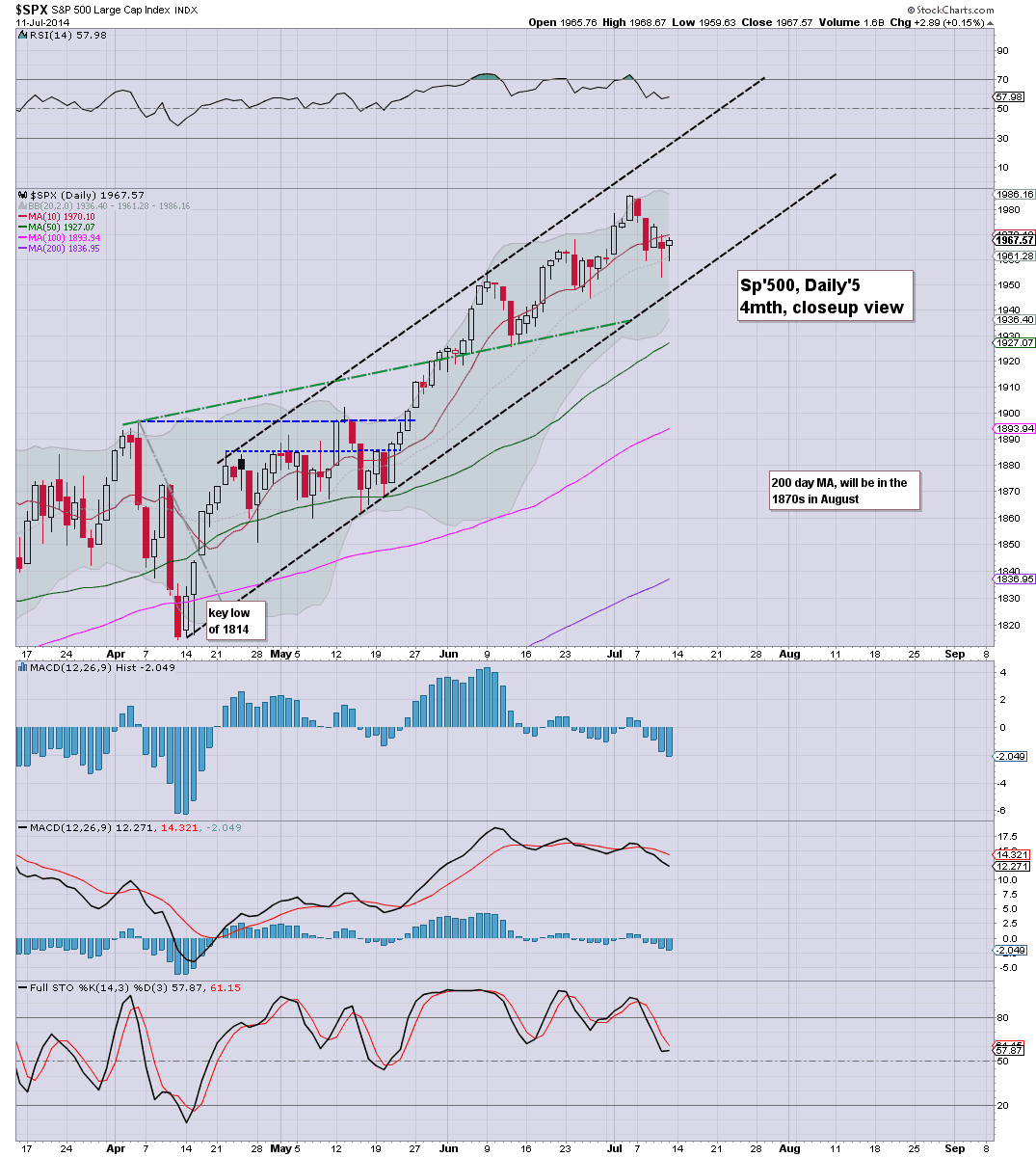 Well, congrats to Germany. No doubt they will be in party mood for much of this week. With the world cup concluded, we can get back to normal.. if there is such a thing in this twisted market.

So.. we're set to open up a fair bit, and it has bemused me how many have been so bearish lately. Oh well, I guess the sp'2000s will shut a few more of the doomers up, and the 2100s would really grind some more into dust.

Weekly cycle will be offering the 2000s from today onward, but the daily charts will be restrictive to the 1990s this week.

So.. a week away from the market for Oscar. I'm sure a few of you will be glad to hear it. Again, it is notable that Mr Permabull is seeking the 2100s, and in the scheme of things, we're only talking about a further 6-7% higher.
--

Notable early weakness: the miners, GDX, -2.4%, as Gold is now -$25.. and frankly, I don't know why. Metals anticipating the Yellen this Tue/Wed?

Good wishes for the week ahead
Posted by Trading Sunset at 13:24:00
Email ThisBlogThis!Share to TwitterShare to FacebookShare to Pinterest
Newer Posts Older Posts Home
Subscribe to: Posts (Atom)