Volatility - holding up, despite index gains

The blue candle on the rainbow chart (elder impulse system), along with a still recovering MACD cycle, is highly suggestive of much higher VIX in the coming 3-5 days. 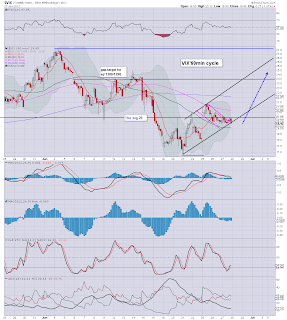 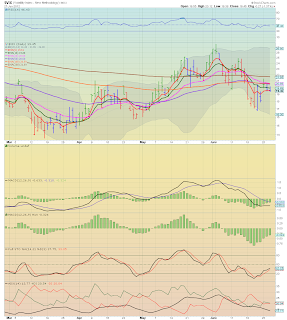 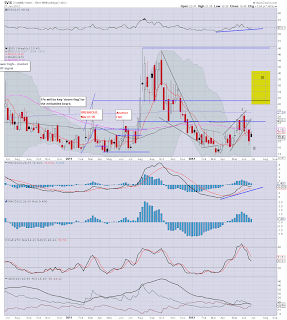 VIX is arguably still in a general uptrend on the hourly cycle. First target would be 22/24 in the coming few days.

Closing Brief - a minor victory for the bulls

A somewhat stressful day for those bears who are not keeping the bigger picture in mind (low sp'1100s, late July). Clearly, a fair few will have bailed today, and some may even have gone long. The action in the VIX is not confirming the rally in the indexes. Bears have that going for them at least today.

Lets take a look at those closing hourly indexes... 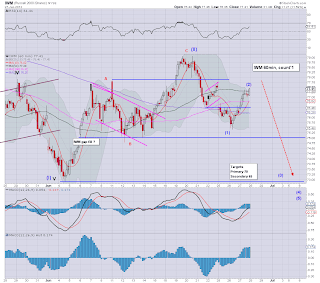 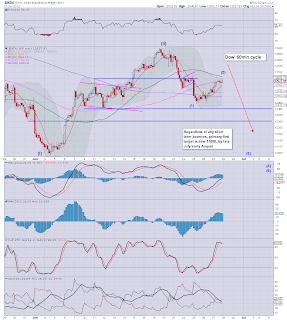 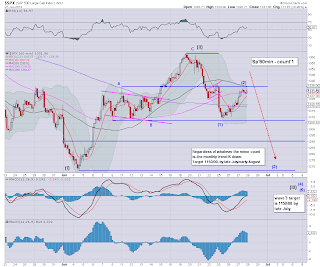 The closing hour did see a little reaction off the 1335 resistance line.

More later...
Posted by Trading Sunset at 21:02:00
Email ThisBlogThis!Share to TwitterShare to FacebookShare to Pinterest

Whilst the PIIGS battle it out on the green grass, the market looks like its quite possibly maxed out for this 'minute wave'2 of minor 3..of main wave'1 (if that makes sense!) 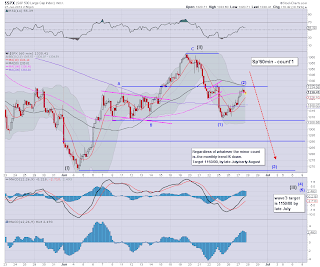 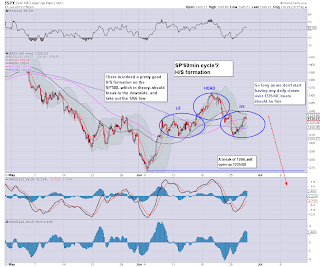 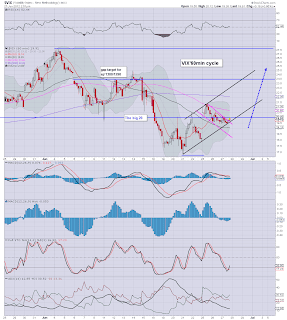 Most bears should arguably not have been stopped out yet, only a close over 1335 would be a threat to the overall outlook, and 1340 would be for those with greater loss-tolerance.

The VIX is especially looking good from the bearish perspective.

The bears would much prefer a close under the hourly 10MA of sp'1326.

More after the close
Posted by Trading Sunset at 19:53:00
Email ThisBlogThis!Share to TwitterShare to FacebookShare to Pinterest

2pm update - Battle of the PIIGS

Whilst the casino wheel continues to slowly spin this afternoon, there are other more important matters due to begin...

The Euro' 2012 football match - Portugal vs Spain  ;)   I think I can say (without the SEC sending a SWAT team through my window), I would be 'bullish Spain!'
- 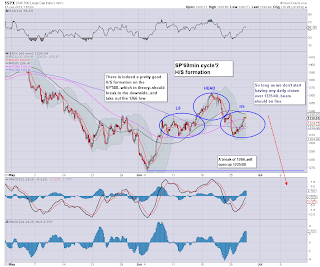 Bears would very much prefer a close under the hourly 10MA of 1324. That would certainly take the edge off today, and would still easily allow a move to 1300/1290 by Friday.

As noted MANY times this month, it will be important to see the month of June close sp<1305. A close this Friday of 1330s or higher would seriously wreck the monthly bearish outlook.

More later...but there is an important game to focus on!


ps. The big unknown about today's big game...who will ask the referee for a bailout first?
Posted by Trading Sunset at 18:53:00
Email ThisBlogThis!Share to TwitterShare to FacebookShare to Pinterest

1pm update - waiting for a turn

Market still crawling higher this hour. We're now close to the border of what is probably a large H/S formation. Bulls should be seeking a breakout >1340. Bears will need to get back into the low 1310s..and break 1300 to confirm much lower levels in July.

Its not a bad place for new positions to be taken, whether bullish or bearish. The stop levels are indeed pretty clear. 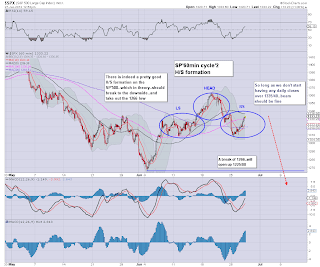 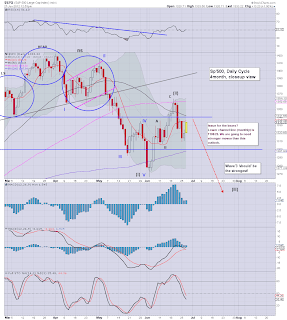 The daily index chart does look a little scary right now, but the daily 10MA at 1335 is pretty strong resistance, a close above that won't be easy for the bulls.

VIX continuing to hold up well. The option writers clearly aren't so bullish about the near term as the indexes might suggest.

I remain short...and will hold overnight.
--

'no risk of (Australian) housing bust'

Mish again highlighting a key issue...Australia (and Canada in my view too) both have crazy housing problems right now. Both look set for major down cycles.
Posted by Trading Sunset at 17:55:00
Email ThisBlogThis!Share to TwitterShare to FacebookShare to Pinterest

With the VIX still holding up well (it was even green earlier - a real warning to those bulls going long this morning), the sp' index appears to have a new H/S formation. I should have perhaps identified it a bit earlier, so I am somewhat annoyed with myself again, urghh!

If the formation is correct, it would imply there will not be a daily close over sp'1335/40, and then bears should seek a break below 1310/00 within days. 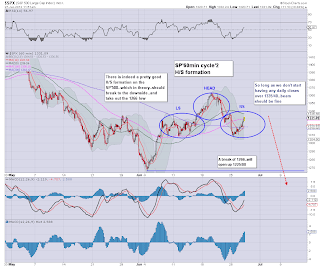 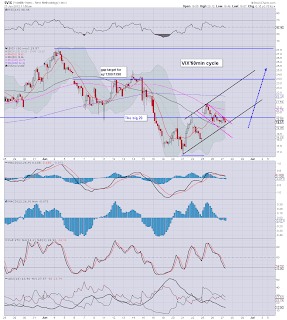 I remain short (from sp'1319), riding out this annoying minor rally, first exit target 1300/1290. That could still be hit by this Friday close, but if things get choppy, I might have to hold into next week before my next exit.

I still plan to short every bounce/spike all the way down to sp'1150/00 across all of July. I will NOT get rattled by this kind of nonsense that we've seen this morning.

So, those bears holding on right now should merely button up their flak jackets, sit back..and wait.

More across the afternoon.
Posted by Trading Sunset at 16:53:00
Email ThisBlogThis!Share to TwitterShare to FacebookShare to Pinterest

11am update - VIX holding up for the bears

Considering the gains across the indexes this morning, the VIX is holding up very well. This could easily be a clear sign for the bears that this move higher is an intra-day fake. 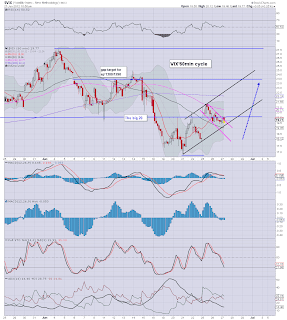 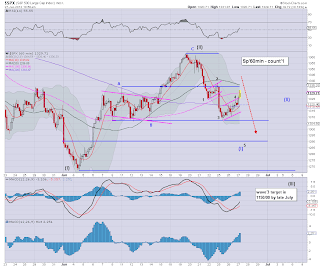 Next soft resistance for the bulls is sp'1335. I would be very surprised if we can close over that.

I remain holding short...until 1300. I'm certainly not bailing at these levels.
--

One thing I am keeping in mind though, it is arguably very important for the June month to close at least marginally red. Bears need to see the SP' fall back 20pts or so by Friday. As I noted a few days ago, I'd really like to see Friday close sp'1305 or lower. 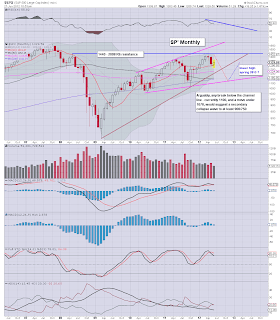 More later!
Posted by Trading Sunset at 15:52:00
Email ThisBlogThis!Share to TwitterShare to FacebookShare to Pinterest

Good morning! Today should be one for the bears. Now, remember, last Thursday the market opened marginally up..but still closed down around dow -250pts. So, we have a long day ahead. Bears should not get rattled by minor up moves. The main trend remains down.

Key econ-data just out..
Durable Goods Orders: 1.1% vs 0.4 expected... so.. that will was certainly above the outlook. 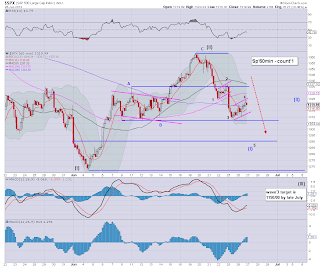 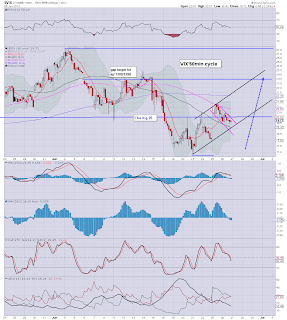 We could easily see a spike up to VIX'22 later today or tomorrow.

Good wishes for Wednesday trading!
Posted by Trading Sunset at 13:31:00
Email ThisBlogThis!Share to TwitterShare to FacebookShare to Pinterest

The short term daily action remains choppy - as is often the case, but the multi-month trend remains absolutely clear.

We remain in a downtrend since the rollover in April. 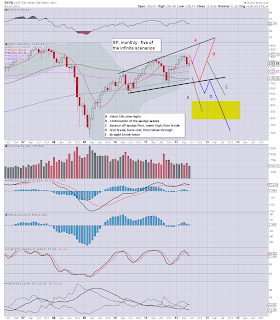 A significant decline is anticipated in July, and we could swiftly decline all the way the target zone of 1150/00, although it may take as long as August to reach the target. In the scheme of things, I don't much care how many weeks it takes. As I increasingly like to say..'the good bear..is a patient bear'.
---

B for Bernanke...you might say. If Benny does not at least overtly hint at QE3 in August though..we'll soon break the 1100 level, at which point there will be two key levels/zones to look for.


Looking ahead to Wednesday

Some key econ-data pre-market...so be sure not to oversleep! I'd be content to exit my latest short around sp'1300, but its viable we could even go a little lower than that. As ever..good short-stops..will make things simpler.

Goodnight from London
Posted by Trading Sunset at 03:30:00
Email ThisBlogThis!Share to TwitterShare to FacebookShare to Pinterest

The daily cycles all look set for a bearish Wednesday..and indeed, possibly the rest of this week. First downside target will be sp'1300/1290..which is feasible by the end of tomorrow. 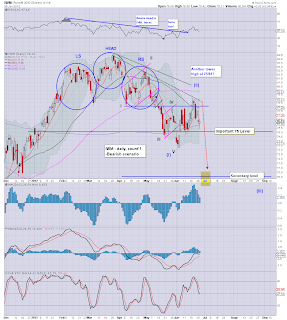 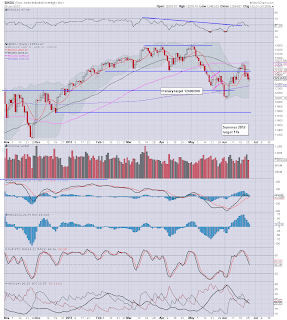 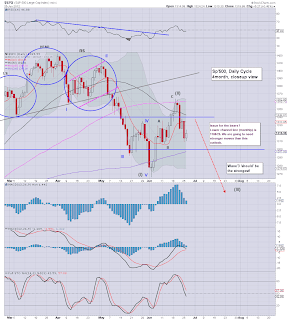 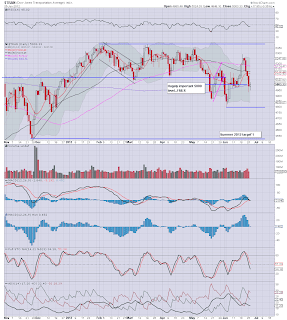 The MACD cycle (blue bar histogram) is indeed set to go negative cycle tomorrow. The algo-bots will doubtless be programmed to sell into that type of signal. At some point we are going to take out the recent sp'1266 low..and then move to 1225/00. The early part of July..starting next week no less, will be one VERY busy time for those shorting their way to sp'1150/00.