With the main indexes closing lower, the VIX managed to close with moderate gains of 6.9%, settling @ 15.94. Near term trend for volatility remains broadly to the upside. The only issue is whether VIX 20s will be hit before August concludes. 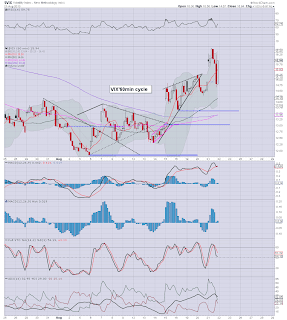 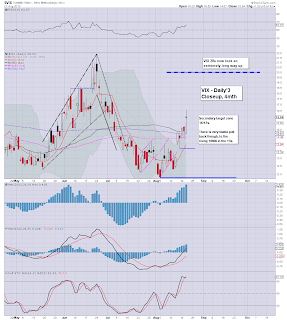 So..moderate gains for the VIX..but it has to be noted, that today was VIX opex, and with August VIX settling at 16.41 (or so), the closing level in the 15.90s ..is arguably a net decline on the day.

The only issue is when the big VIX 20 threshold will be tested...not if. That currently seems very likely in the first half of September.
-

The main indexes closed lower, with the sp -9pts @ 1642. The bulls were unable to hold the secondary reaction to the fed minutes..having peaked at sp'1656. Metals and Oil both closed lower, whilst the VIX was +6%. USD was naturally stronger, +0.5% 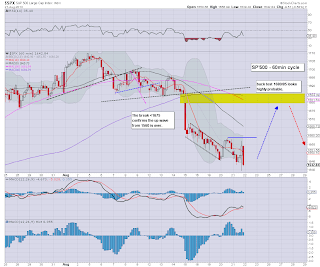 The market was significantly affected by the FOMC minutes, and a few whipsaws have really left many confused.

Yet, the bigger picture is clear from the weekly charts..as it has been for the last 3 weeks. Market can not cope with the notion of less QE, and a return to the sp'1500s is a given.


*I remain largely tired of this market (which is putting it politely), I will again consider a long..if sp'1635 tomorrow. I will NOT consider any shorts, unless sp'1680s.

--
bits and pieces across the evening...
Posted by Trading Sunset at 21:01:00
Email ThisBlogThis!Share to TwitterShare to FacebookShare to Pinterest

Despite the brief initial reaction to the downside - with new daily lows, the market is naturally snapping back..and will very likely close strongly higher. The bulls look set for an easy hit of the sp'1680s by the Friday close. VIX is getting destroyed, and the 13s look a given. 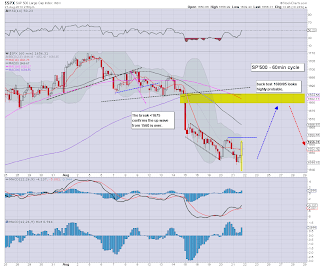 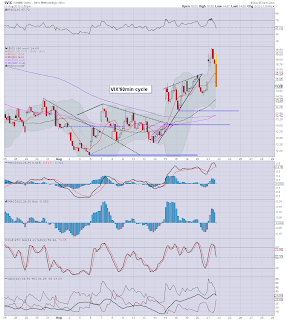 Well, there can be no excuses for the bears.

All the small cycles have been floored for hours, and the market is just doing what many have been expecting for the past few days.

--
I guess some bears need to experience this another few hundred times before they 'get it'.


3.24pm...I see some bizarre comments from the whining and bitching bears out there..seeking a close at 'lows of the day'.

Yeah, good luck with that.
-

NONE of the smaller cycles look good for the bears, and with the daily similarly low, this is a lousy place to short.

What a train wreck out there...most seem to have completely lost perspective on whats happening.
Posted by Trading Sunset at 19:51:00
Email ThisBlogThis!Share to TwitterShare to FacebookShare to Pinterest

The indexes look poised for another attempt to battle back upward. Primary target zone remains unchanged, at sp'1680/85, which is still viable before this week concludes. VIX is +6% in the 15.80s, but relative to the opening opex, VIX is really -3%. 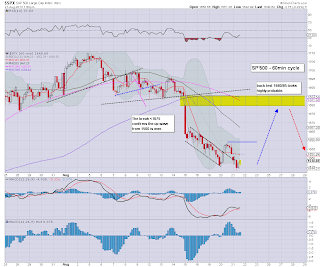 ALL micro-cycles look floored, and the daily charts are similarly looking floored.
-

Regardless of the fed-speak, I'm guessing the bull maniacs will use it as an excuse to rally.

A close in the 1660s looks very viable today.

Its not like we're not seen this kind of move a few hundred times before.
-

*I'm sick of this market, I ain't getting involved.

Good luck to those who are.  The obvious long-stop is the earlier low of sp'1642

It remains a train wreck of a market on Fed days...best left alone.

Sp'1680s remain the obvious target.
Posted by Trading Sunset at 18:51:00
Email ThisBlogThis!Share to TwitterShare to FacebookShare to Pinterest

The main indexes remain moderately lower, a mere hour ahead of the FOMC minutes. Bulls still look set for much higher levels across the next few days. VIX remains higher, almost all the gains are via an opex jump to the next month. 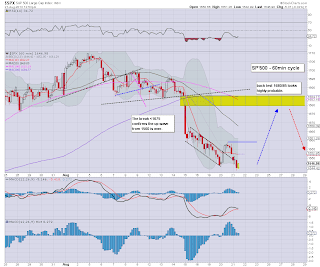 The micro 5/15/60min cycles are all looking floored.

Who wants to trade ahead of the next Fed press release?

--
Personally, I'm beyond tired of this nonsense.

It'd be the height of irony if we just keep falling..from 1709..all the way to the lower weekly bolinger (sp'1550/60s), whilst I sit paralysed on the sidelines.

Posted by Trading Sunset at 17:56:00
Email ThisBlogThis!Share to TwitterShare to FacebookShare to Pinterest

The bulls are unable to build any momentum, and the bears are making a play to push into the mid sp'1630s - where there are multiple aspects of support. Metals/Oil only a touch lower, whilst VIX now up 10%, in the 16.40s 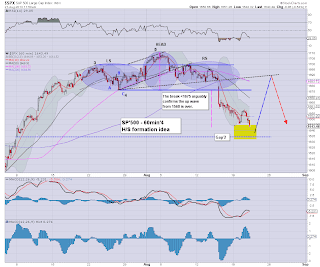 Its getting kinda interesting..and there is now no reason not to expect at least another hour of downside.
--

*I will consider going long in the 1636/33 zone, especially if the market can stabilise after the FOMC minutes at 2pm.

time for lunch!
Posted by Trading Sunset at 16:51:00
Email ThisBlogThis!Share to TwitterShare to FacebookShare to Pinterest

11am update - market set to ramp

The main indexes continue to hold just above yesterdays lows, and with the VIX looking maxed out, bulls look set for significant latter day ramp. A close in the sp'1670s looks very viable if the algo-bots like the FOMC press release. 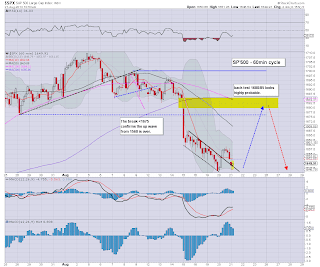 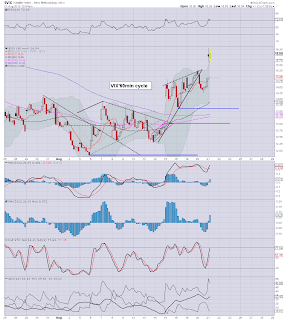 *ALL micro-cycles, look floored, and bulls should be able to build gains across the rest of the day.
-

Yours truly..remains paralysed on the sidelines. I would like to go long, but I can't, I am unable hit the 'go long' button. Despondent, doesn't even begin to cover it.

I'm still not long, but neither will I be short...no way. 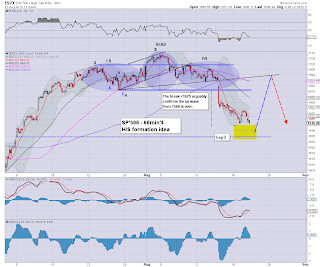 I will look to go long at 1635..if we get there.
Posted by Trading Sunset at 15:56:00
Email ThisBlogThis!Share to TwitterShare to FacebookShare to Pinterest

The main indexes open moderately lower, but bears appear utterly powerless. The sp'500 puts in a marginally higher lower, and looks set to very strong latter day gains..even into the 1670s. VIX is higher, but largely due to VIX-opex. Metals/Oil..still weak. 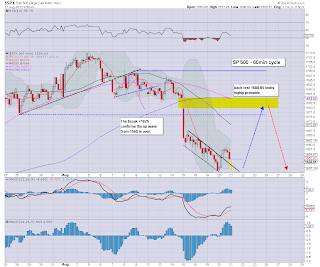 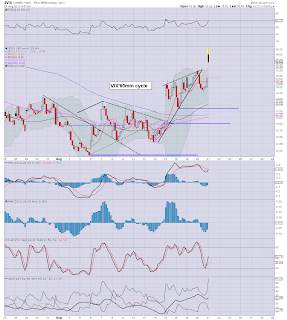 *I was very close to going long at the open, but no..I can't stomach this. Am utterly tired of this market.
--

Opening black candle on the VIX...bears have no excuse to be still short with that.
--

Default trade - as based on weekly charts..is short.

10.16am..hmm....another micro-wave lower. 15min cycles not offering a turn/floor yet.
Posted by Trading Sunset at 14:52:00
Email ThisBlogThis!Share to TwitterShare to FacebookShare to Pinterest

Good morning. Futures are a touch lower, sp -3pts, we're set to open around 1649. Precious metals and Oil are similarly moderately lower. Bulls should be seeking another positive close, at least in the 1650s, if not 1660s, with the FOMC minutes due at 2pm 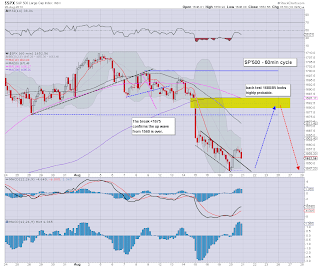 So a little weakness in early morning, but I have to believe the market will rally in the latter half of the day.

The FOMC minutes should be the excuse the market bulls want, to push for a close in the 1660s, and that will open up the 1680s for Thur/Friday.
--

*I remain on the sidelines, but it will be somewhat tempting to launch an index long position, and ride the bounce to the sp'1680s.


UPDATE. 9.33am.. VIX is up significantly..but then..it is VIX opex at this mornings open.

New month for VIX..thus the jump.
--
Posted by Trading Sunset at 13:38:00
Email ThisBlogThis!Share to TwitterShare to FacebookShare to Pinterest

The market looks to be starting a bounce into the sp'1680s, and once again, many are now touting much higher levels in the near term. Yet, the weekly/monthly charts suggest rather significant underlying downside pressure across the next few months. 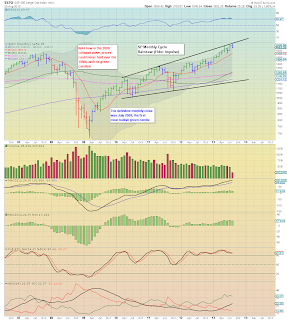 sp'weekly9c - downside to the primary trend 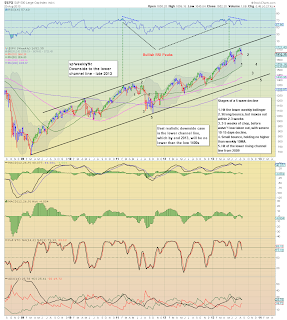 To be succinct. Not only do we have the weekly index charts showing a clear rollover, but we also have the hugely important monthly charts seemingly also rolling over.

In my view, in order for the weekly9c outlook to have any validity, we MUST see a hit of the lower weekly bollinger in the current multi-week down cycle. So long as the 1709 high is not taken out, the current bearish target zone of sp'1575/50 by mid-September remains valid.

I have to say, with a blue candle on the monthly, and a red on the weekly, I feel pretty good about further downside across the next 3-4 weeks.

Wednesday will be all about the FOMC minutes, due for release at 2pm. How many times did the word 'taper' get mentioned? Who said what..and why? Do YOU care?

I don't, although I realise the HFT algo-bots will be reading every word. 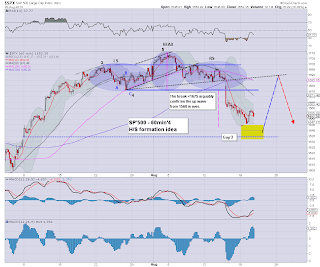 So, the plan for tomorrow? Well, I certainly won't consider any index shorts until the sp'1680s. I'll consider a long, on any move lower, especially around 1635, but I find that very unlikely tomorrow. Considering the strength seen in the Trans/R2K, I am guessing we'll merely battle broadly higher, regardless of how we might open.

The main indexes closed generally to the upside. The sp' settled +6pts @ 1652, whilst the Dow was fractionally lower. The two market leaders - Trans/R2K, closed with much stronger gains of 0.9% and 1.5% respectively. Near term trend looks bullish to the sp'1680s. 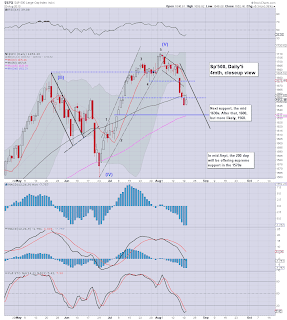 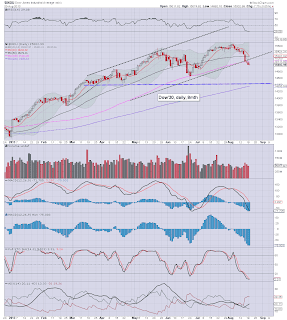 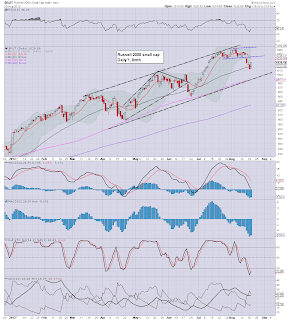 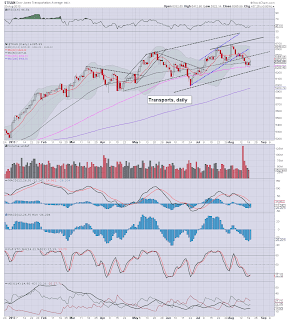 So...it was a somewhat mixed day, but generally, the bulls are starting to push back higher.

Once again, the two market leading indexes - Trans/R2K, are indeed leading the way, and despite weakness in the Dow, I'd have to guess the market will rally for a few more days.